The Deliverance - One week in the Oregon backwoods - Part 1

Feb 18, 2010 at 18:46
by Margus Riga
Tweet
Sometimes, while on the road, the only way to gauge what a place is like, is to check out the people at the local grocery stores and gas stations. If that is true, then Dallas Oregon, which is the closest town to Black Rock Oregon, with a grocery store and gas station, is one strange place.

Our crew consisting of Knolly team riders - Curtis Robinson and Alan Crisp, team manager - Chris Glew, filmer - Ambrose Weingart, and myself - the photographer, stopped off in Dallas to pick up groceries for camping.

View part 1 of 4 inside,I was in charge of watching the truck and bikes while the rest went to get the groceries. In the space of twenty minutes while waiting for the guys, I saw: a shifty looking skinny dude with a leather hat and a smoke in his mouth cruise by on a clunky bicycle. An excessively hippy-garbed old bearded fat man plunk himself out of an equally excessive hippy-garbed van, and a grizzly looking, serious dude get in his truck that had different colour body panels, and tear out of the parking lot like he was being chased by someone.

At this point, all the stories of redneck debauchery and madness that Ambrose, who had been here before, had been feeding us all the way down from Vancouver were sounding true. 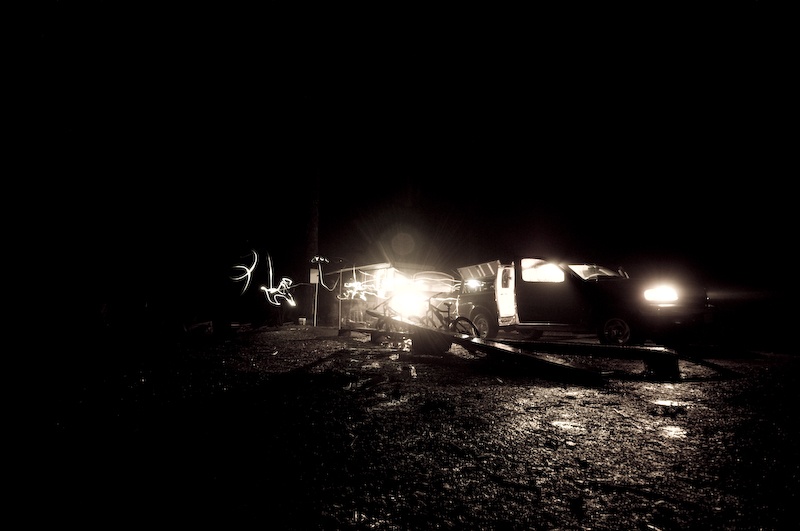 We arrived at Black Rock late at night, in the rain. We quickly set up camp and I went to sleep to disturbing scenes from the movie Deliverance dancing around my head. 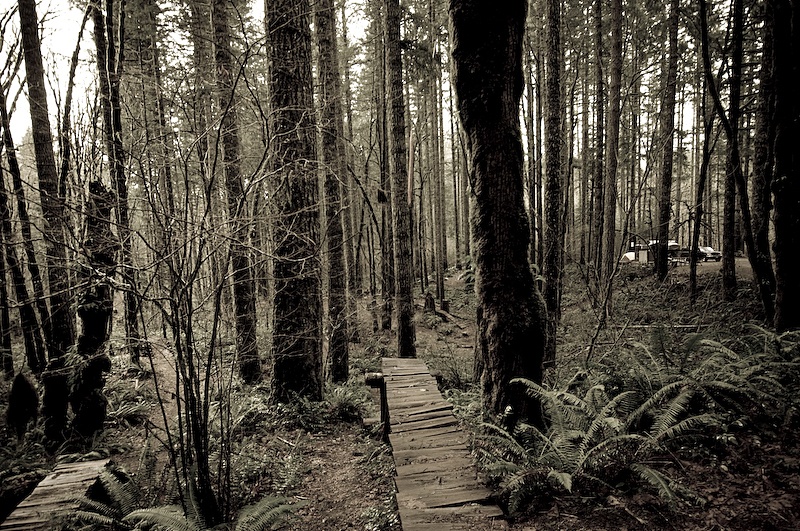 Waking up to this was a pleasant surprise. We were situated at the base of the famed trails of Black Rock Oregon and Brown Mountain which they're on. 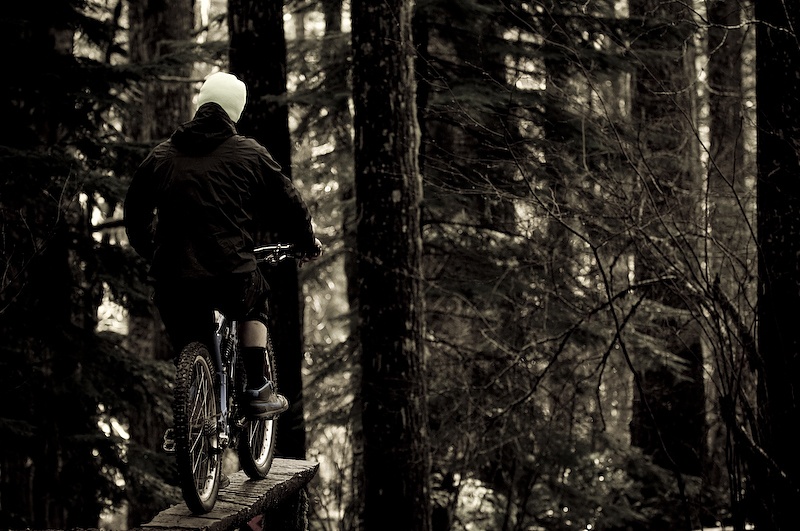 Brown Mountain is a lone mountain of lush old-growth greenery in the midst of an ocean of Oregon clear cuts. It's still there because of one Spotted Owl, and the group that protects it. And the local trail builders who miraculously managed to gain access to the zone to build some of the freshest high speed downhill trails anywhere.

The staging area where we were camped had a warm up zone, a map of the trails, and even a garbage can. 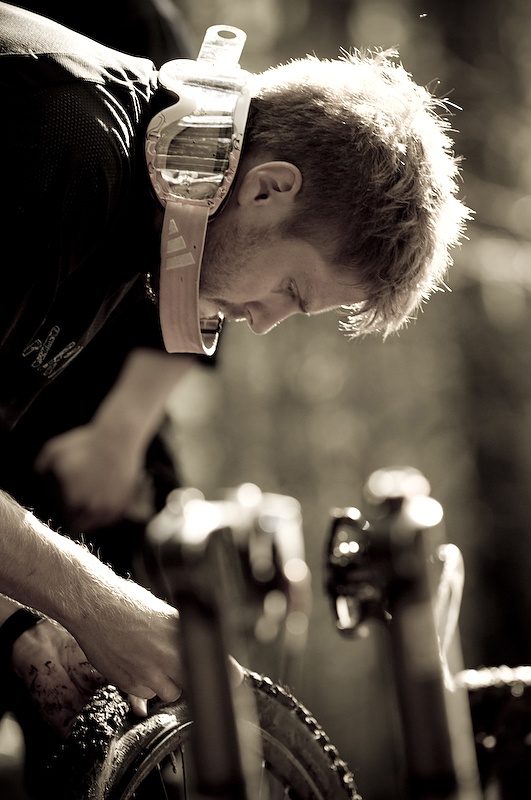 Our goal for this trip was to document the two new Knolly team riders as they rip it up on the first
official team trip of the season. After some initial warm up laps in the still wet from the night before
conditions, it was time to make last minute tire changes and start filming. 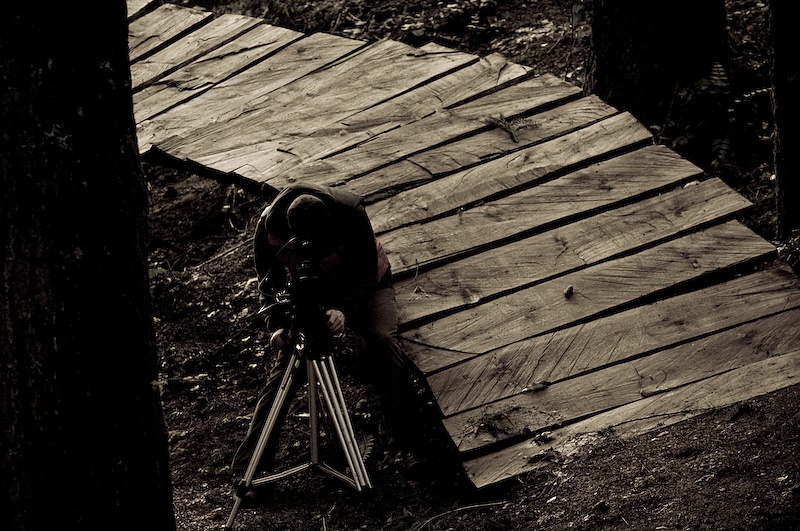 Though it was sunny and warm, the soil and some of the ladder bridges were still very slick. This ladder behind Ambrose claimed the first crash of the trip. 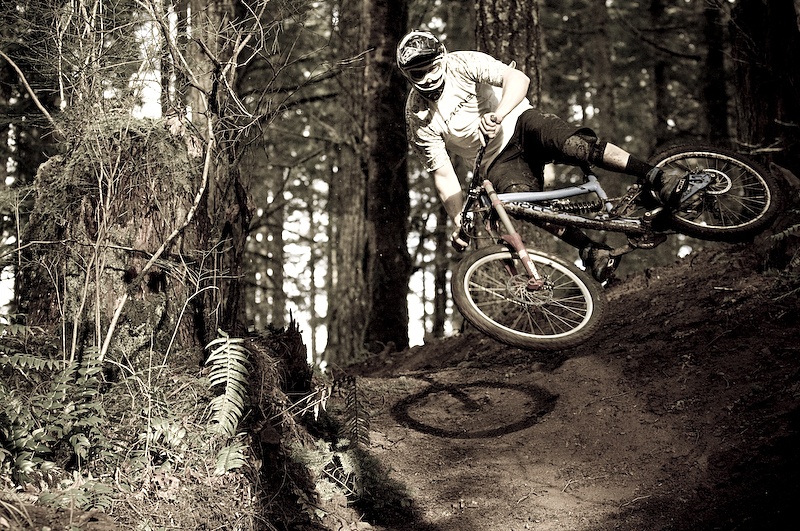 The second crash of the day was this little corner. Curtis Robinson was working it pretty good, until this shot. The berm just got too wet and he couldn't bring it back around. This is pretty much exactly how he landed. 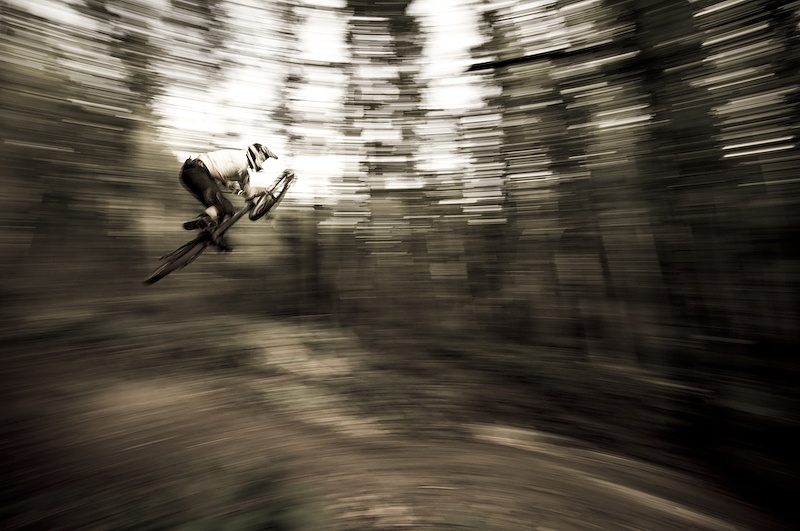 Two takes on the same hit. 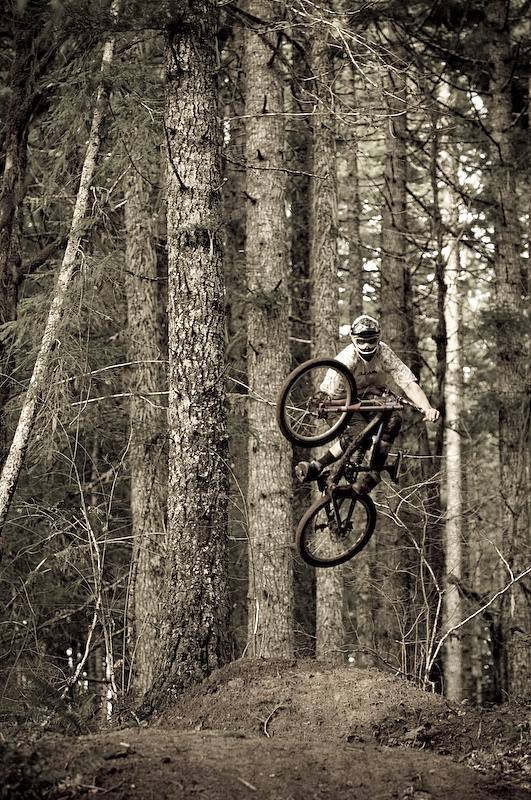 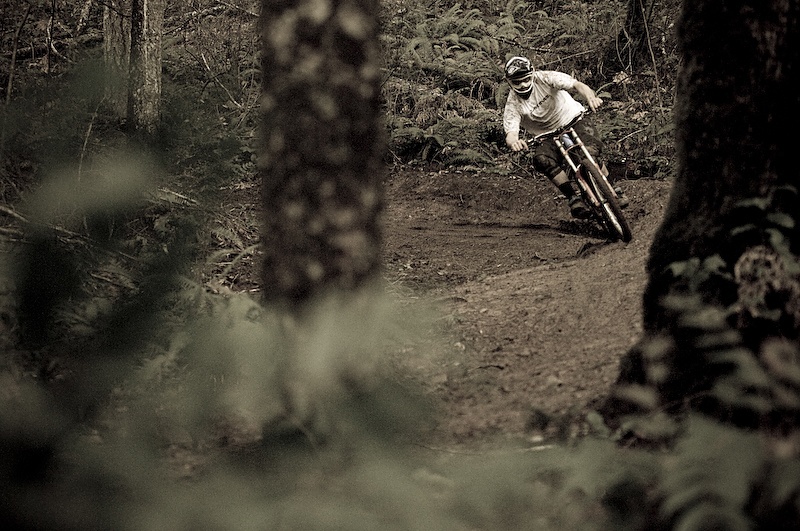 The light was going down fast and the conditions weren't getting any dryer. This was the last corner we worked for the day. 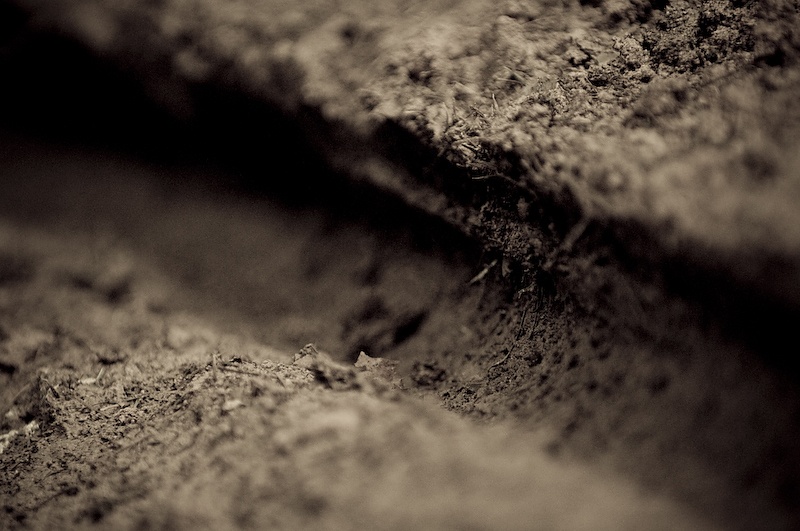 By the fifth time Curtis hit this corner, it looked like this. 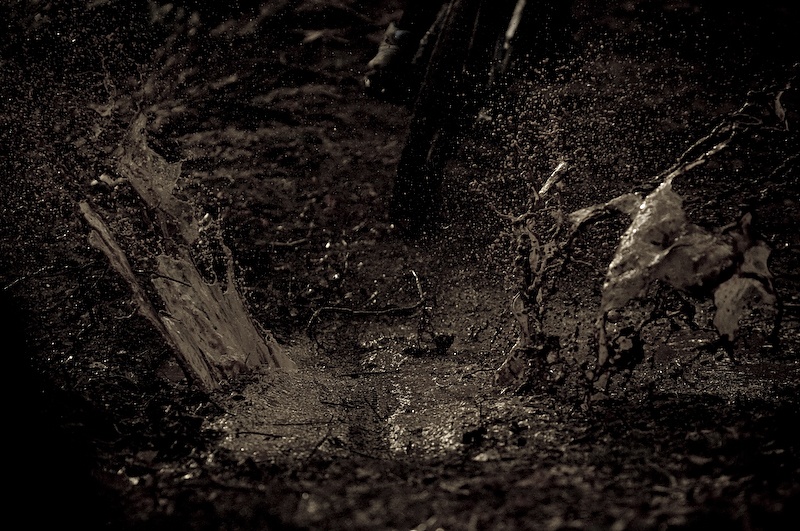 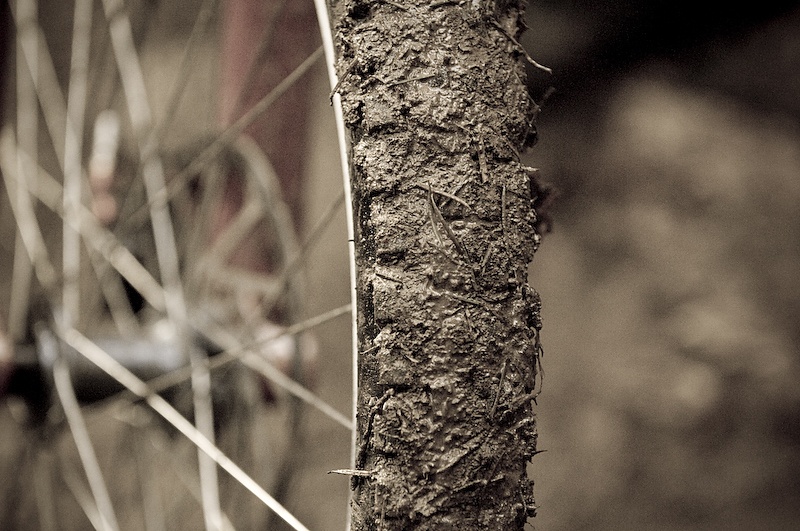 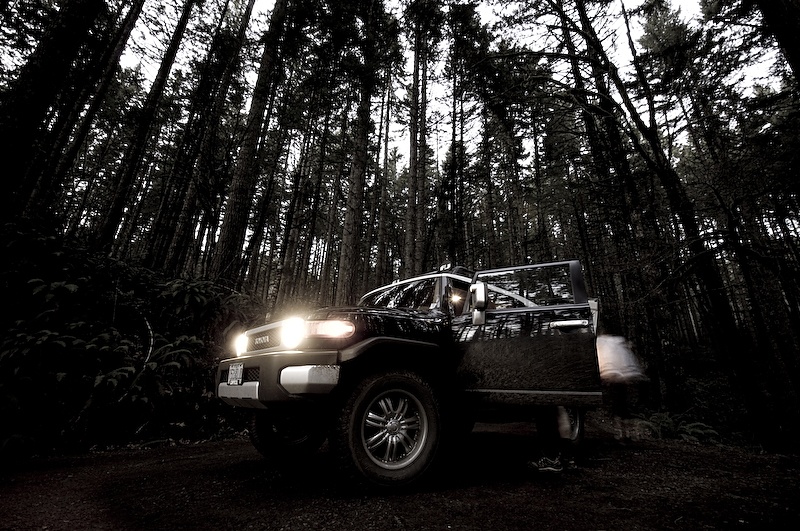 After a wet and mucky first day of filming and shooting Curtis, we headed back to our campsite. Normally, you're not allowed to camp where we were, but thankfully the head of the BRMBA (Black Rock Mountain Bike Association) was there to OK our spot, and even chop some firewood for us. This here's his little shuttle bunny.
This concludes part 1 of 4, so stayed tuned tomorrow for part 2. Check out BRMBA to learn more about their amazing riding area.

mustbike (Feb 23, 2010 at 7:33)
black rock is the shit. but the closest town is not dallas though. you have to drive thru falls city and then your practicly there, after you pass the commune. falls city has 7 churches, 1 bar, 1 grocery store and a gas station.

pdxseth (Feb 23, 2010 at 7:42)
yeah talk the old heads playing cards and drinking there coffee in that grocery/gas store bet they got stories. and the locals are pretty odd I think..lol.. But I do love to ride those trails. Best place outside of Post Canyon to ride. If you like to fly high.

nato (Feb 23, 2010 at 8:41)
They mix great... Nothing beats firing a potato cannon at an old wrecked car while passing a spllif around LOLs

richierocket (Feb 23, 2010 at 6:04)
Old growth back woods riding is the best, specially when camping out! Thanks for EVERYTHING in this article!

Gunnar (Feb 23, 2010 at 8:09)
Shit! I would have loved to meet up with you guys and showed you some of the local spots here in Bend. So far it sounds like your trip was pretty fun though. Nice article! And those are some sick pictures.

ExCactus (Feb 23, 2010 at 19:07)
How far from Pacific City is Blackrock? I head down there for some camping and a few brews at pelican bay brewery every once in a while but dont know where the riding in the area is.

dirtcool (Feb 24, 2010 at 9:59)
Yeah if you think the grocery store is bad NEVER and I mean NEVER go in the local bar. It is bad if you are not a local. And its easy to tell if you are a local, as you can figure out from above.

jakeami (Mar 20, 2010 at 0:19)
Rob, great name drop and a compelling response but I'm pretty sure the BRMBA doesn't want to promote the misuse of trails. Regarding the lack of private boys clubs in your area, you may want to reconsider reaching out until you find a more appropriate forum.

konadan (Mar 29, 2010 at 7:42)
It is interesting to read all the responses both good and bad about the winter shredding that went down for this film session. The truth is, BRMBA builders are stoked to see people having fun on our trails wether wet or dry. I personally love shredding BR in the muck and all those sweet berms make it possible. Trust me, the trails here can take whatever these riders can dish, in any season. If the trail was closed for repair, it would be a different story. Quality trails hold up, so come shred the slop, and beat the summer crowds! p.s. Lets try to keep the slander out of this discussion, It just makes us all look stupid. Rob is a nice guy.

Stayonyourbike29 (Feb 23, 2010 at 6:43)
So sick, awsome pics and beautiful trails, those woods look amazing, big up to the knolly team keep the Deliverance alive,

gotta love Blackrock, where else are you guys headed?

Sick pics by the way!

GaelenHarrison (Feb 23, 2010 at 11:05)
Props for riding blackrock in the muck, too bad you guys weren't here last week it was beautiful.

chrisj5285 (Feb 24, 2010 at 19:22)
best bike mechanic in oregon in my opinion that guy has worked on every bike i have ever owned. Where other people half ass it and you have to make small adjustments he does it right the first time his work has always been spot on!!!!

robholio Plus (Feb 26, 2010 at 11:17)
Well Jake, considering they were there with the blessings of BRMBA to the point they were allowed to camp at Basic Training, I don't think Rich or the other builders are overly concerned about it. They make their trails for everyone to ride and take things like this into account. No private boys club trail mentality down there, unlike a few other builders I know of...

edub (Feb 27, 2010 at 19:59)
Any time someone tears up a trail that you work hard on and you see it ripped a new one, you wonder about rider etiquette. Roosting trail is fun and all; but shovel time is hard work and to see it disrespected is disheartening. But, I guess not everyone has lifted a SHOVEL on a routine basis to know how it feels to have to re-work a feature, trail, or trail segment due to rider neglect on a freshly laid berm. Sometimes it is hard to turn your cheek and go back to make riding excellent for everyone without assistance or respect.
Post a Comment