Video: High Speed eMTB Hucks in 'Out for a Rip'

Ebike Ernie AKA Evan Mercure, just found out about the magic of Ebikes. So he headed out to his friend's private trails to see how many laps he could bang out in a day. Safe to say he is now hooked and has changed his name to Ebike Ernie

To find out more about the Alpine Trail E head here. 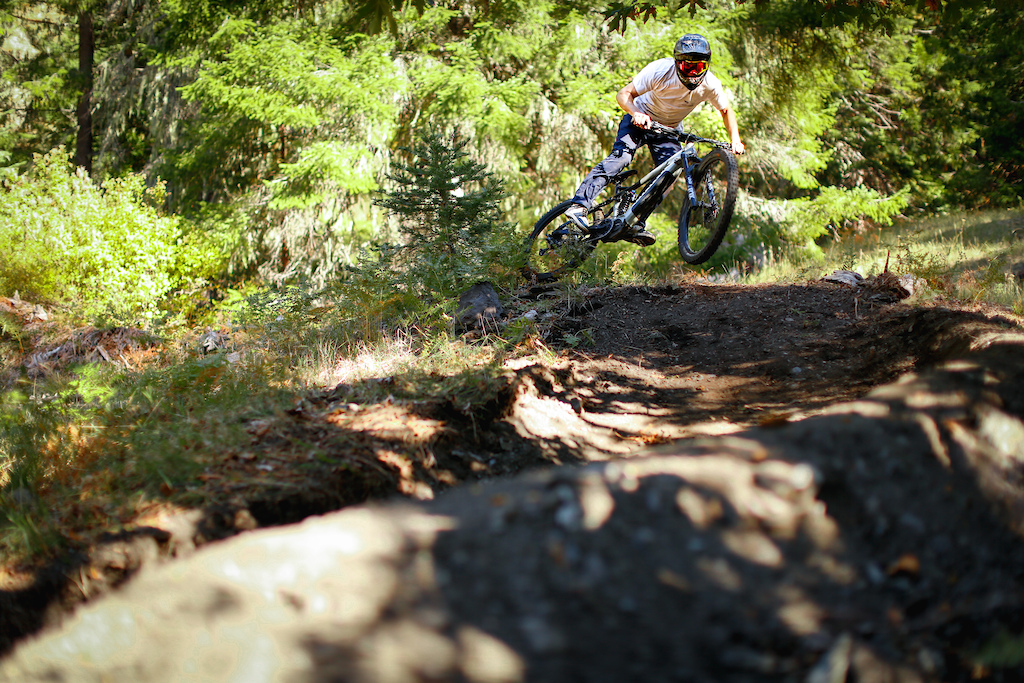 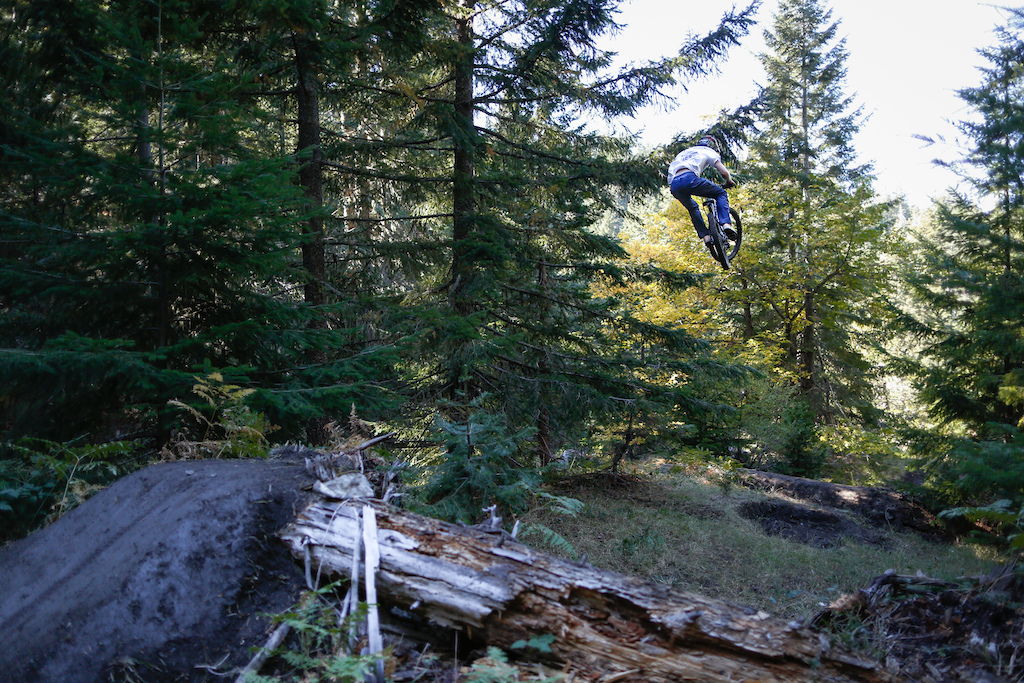 RedBurn (Jan 5, 2022 at 4:36) (Below Threshold)
I agree, i d just say his protections are not a good example, for downhill speed he should have a back protection, gloves ??? Looks like he has kneepads at least

Or you know, enjoy the edit and cut the "holier than thou" attitude. They're out there to shred, not to raise your kids for you.

ivcstudio (Jan 5, 2022 at 13:42)
@hexhamstu Appreciate the support my guy! we put blood sweat and beers into this one for the people!

nigelnobrakes (Jan 5, 2022 at 2:42)
Jordan 1 lows, I rode with some and they didn’t feel very grippy but this dude makes them work. Great vid

rrolly (Jan 5, 2022 at 6:45)
I kept watching them draping over the pedals and thinking how much my feet would hurt.

krazyjey (Jan 5, 2022 at 6:38)
I am in cape town , just came back from a 27 degres ride and a great blue sky , it was lekker
On the top of the trail I met with Arnold , a 75 years young guy. He did not try to convince me about his Levo with minnion on it, his fox tee shirt and baggy pants, He just asked me if my bike was doing it s job...i asked him what job ?
Do you like to go up or down ?? well sir, down i am a downhiller...
He answered , Life is too short for holding on , do yourself a favour found those dollars and enjoy the ride on the way down , at least 5 or 7 times....while i was pushing my bike up, he managed to do 4 runs , while i done 1 and looked at my best friend ( a 26 devinci enduro from 2011 ) , don t tell my bike and the wife in 2 years i will own one of those pedal assisted machine.
i just hope the change and timing will be smooth and make me enjoy as much i do love shredding and going out for a quality time on or off trail.

krazyjey (Jan 5, 2022 at 7:56)
@mi-bike: Bru who is racing here ? Never took time to enjoy the scenery and watch people riding ? i did . great to see youngster shredding and older sweating on a ebike OR NOT . don t mix your understanding of reality with mine dude, Different world , Different minds , this is the country of the Cape Epic and those riders will smoke you up hill anytime or down ( ask greg) . that is why i am here riding, trully enjoying nature and appreciate riders of many stories. Be good, Be open ,There is no problem Karen.

mi-bike (Jan 5, 2022 at 21:02)
@thepoolguy: First he mentions that Mr. 75yo managed 4 runs while he was pushing his bike up, which sounds like a complaint to me. Then he explains a bit more about himself saying that he enjoys the scenery and nature and watching people ride (very zen). @krazyjey can blabber all he wants (and people can downvote me all they want

Corinthian (Jan 5, 2022 at 6:53)
Great advert for Marin; that was superb riding & filming. Lovely looking location too.

Yaan (Jan 5, 2022 at 7:46)
Now let’s see the edit from the haters that rode their 120mm killer climbing machine to the top because there are real riders.
No short travel bikes are hitting it like that.

hqrsie (Jan 5, 2022 at 4:39)
With that title, I was really hoping this would be the soundtrack
www.youtube.com/watch?v=F-glHAzXi_M

CleanZine (Jan 5, 2022 at 6:17)
@Dlakusta: Yeah, I don't really get why people are getting as sour about content on here as they are. It's out of race season, for most people in the Northern hemisphere there's going to be less riding going on, there are virtually no product launches at this time of year, product availability is patchy at best so it seems most sites can't get hold of parts to review them - I'm not really sure what people are expecting other than that? They've just released the Field Test which was a load of original content, the same with the Budget vs. Baller series, the PinkBike Awards and PinkBike Academy (not a fan, but it's not like they aren't doing their own thing in terms of producing original content).

I don't spend much time on YouTube so a site like Pinkbike that aggregates content is a handy way of seeing some better quality edits that pop up without having to sift through all the thousands of hours of riding-related videos uploaded to YouTube every day. Not all of it is my thing, but they're trying to cater to a wide array of riders so I just scroll on by to something else. It's not hard...

Actually on the topic of the post, that video was sweet. Dude can throw some shapes and carry some speed!

RockstarRacingEst1996 (Jan 9, 2022 at 12:16)
Great posture and especially foot position on your flats there young Eddie.

RobbyRideGuide (Jan 10, 2022 at 15:53)
This guys on trail conversations consist of many people saying he’s only fast because he rides an ebike.

tgrey5 (Jan 10, 2022 at 11:00)
I'm guessing Northern California...Marin is in, well Marin County, and Evan is from Humboldt county. However, looking at the trees and terrain it might be Oregon too.

dirtdiggler (Jan 5, 2022 at 11:07)
I think the point is that it's a heavy bike with a battery attached and he straight murdered the trail with it.

tiffe (Jan 5, 2022 at 20:40)
That was my thought as well, was he riding a throttle twister? A pedal assist requires pedalling. If was just about weight any larger bike would do.
Below threshold threads are hidden

DoubleCrownAddict (Jan 5, 2022 at 6:35)
Cool trail without hardly any drainage. Eventually will just be a big Rocky rut.

PHX77 (Jan 5, 2022 at 7:15)
If only YT weren’t such card carrying members of the third reich and blatant Misogynists, the trail would be better. Stay woke bud

PHX77 (Jan 5, 2022 at 8:22)
@DoubleCrownAddict: I did a fist bump emoji after my comment but it didn’t show up. I sent a fax to the Nuremberg tribunal outlining their advertising activities and finger tattoos iconography, which we were all lucky enough to have you point out but I haven’t heard back yet. I’ll keep you posted…..on yer blog, naturally. In the meantime: fight the patriarchy. (Fist bump emoji followed by raised fist emoji)