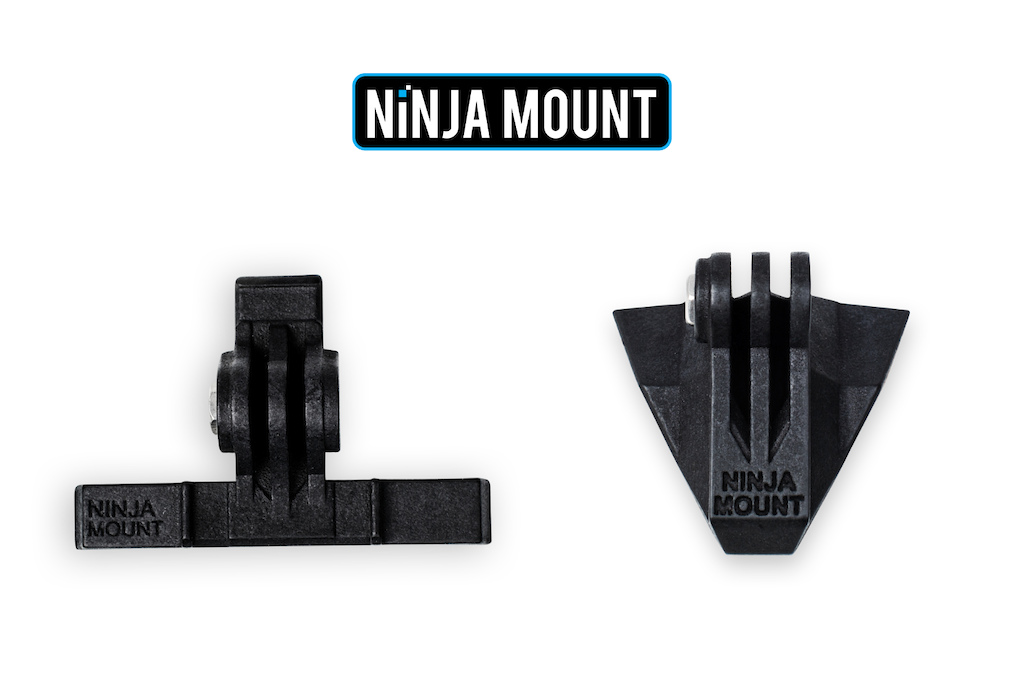 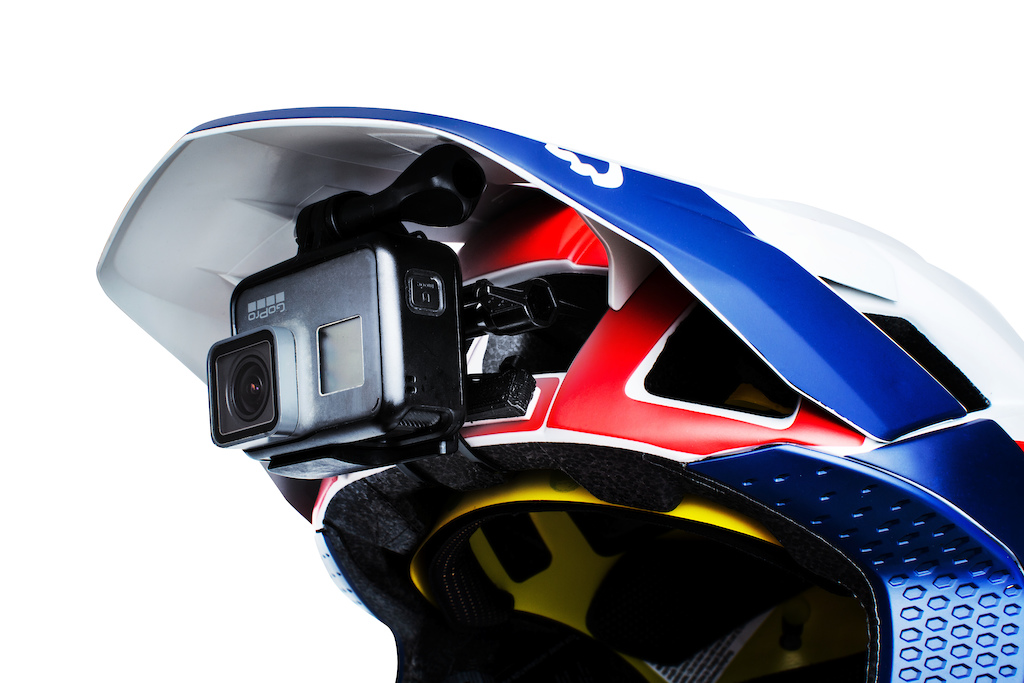 The Fox Proframe is a popular helmet for Enduro riders, but mounting a GoPro or similar action cam has so far been difficult. Thanks to its special design, the new ProAdapter fits the helmet perfectly. Because the helmet has large vents under the visor that should not be covered, the ProAdapter comes with a special fastening concept; two adhesive strips plus cable ties ensure a super stable hold. As with all Ninja Mount mounts, the biker achieves the perfect shooting angle for his/her videos without having the visor in the shots. 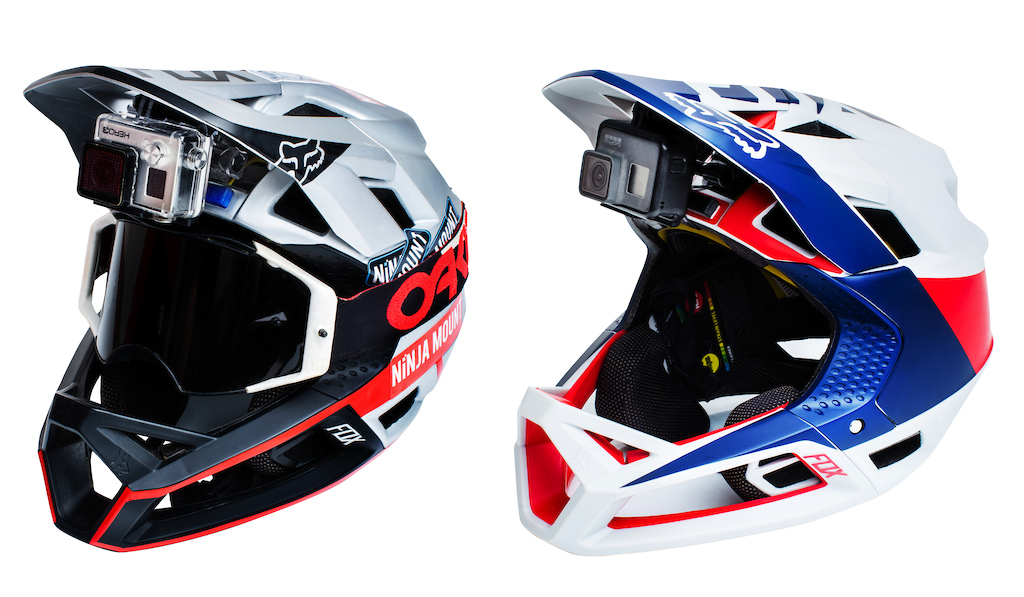 The position of the action cam is perfect for POV shots. 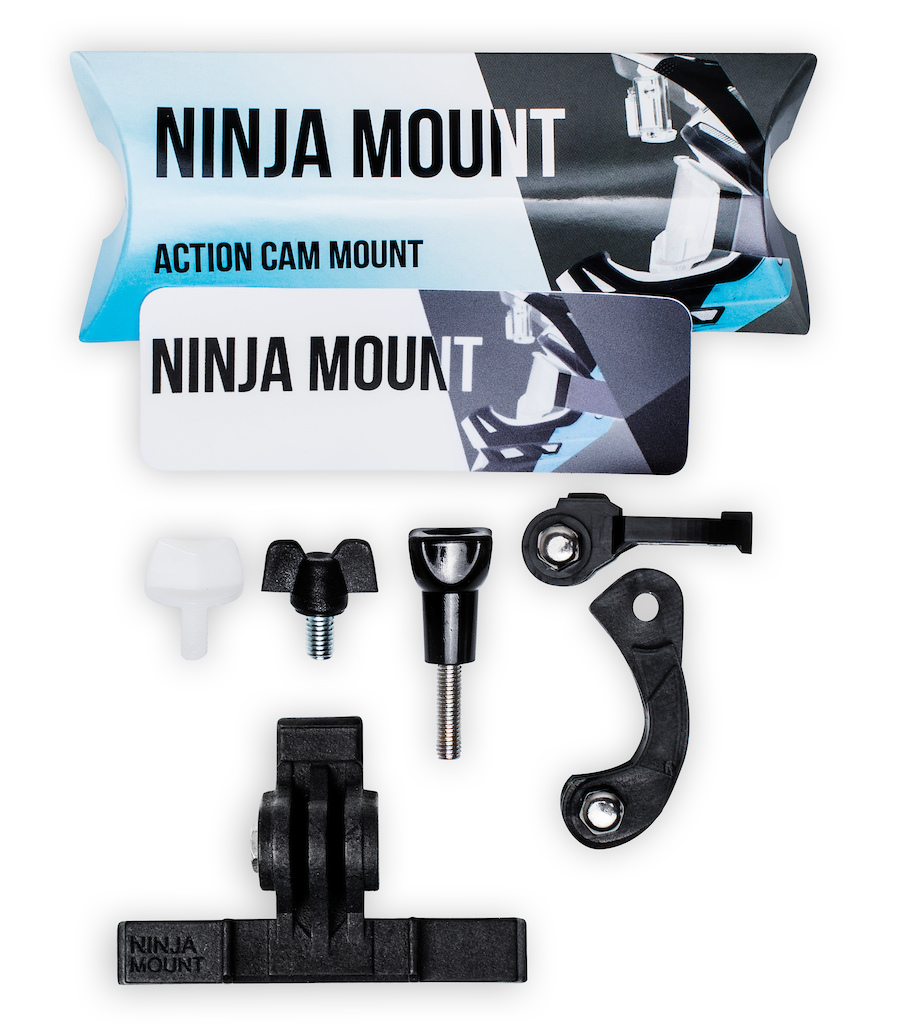 ProAdapter Set is available for 29,90€ at Ninja Mount online shop 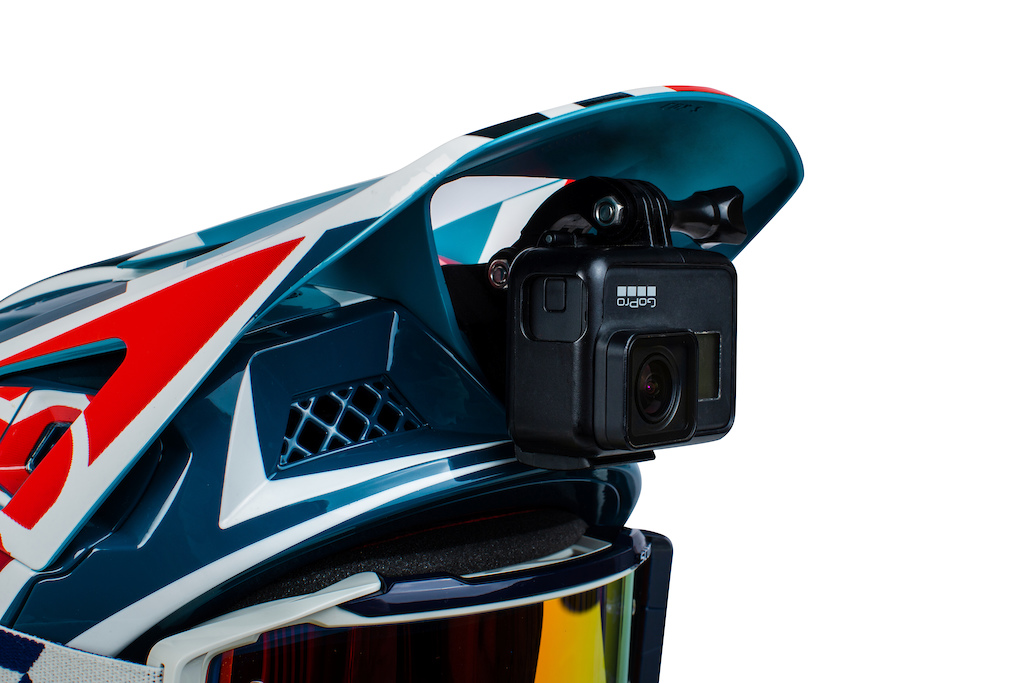 There is also a new product in the range for Downhill racers and Freeriders: the new Ninja Mount RampAdapter was developed especially for the latest generation of the Fox Rampage MVRS helmet with its magnetic attachment of the visor. To fit perfectly to the helmet, there is a special feature: in order to balance the weight of the action cam on the visor, a super strong neodymium magnet is integrated into the adapter. In addition, two specially cut 3M adhesive pads provide the necessary support. The RampAdapter complies with the UCI criteria for use in Downhill and Enduro races. 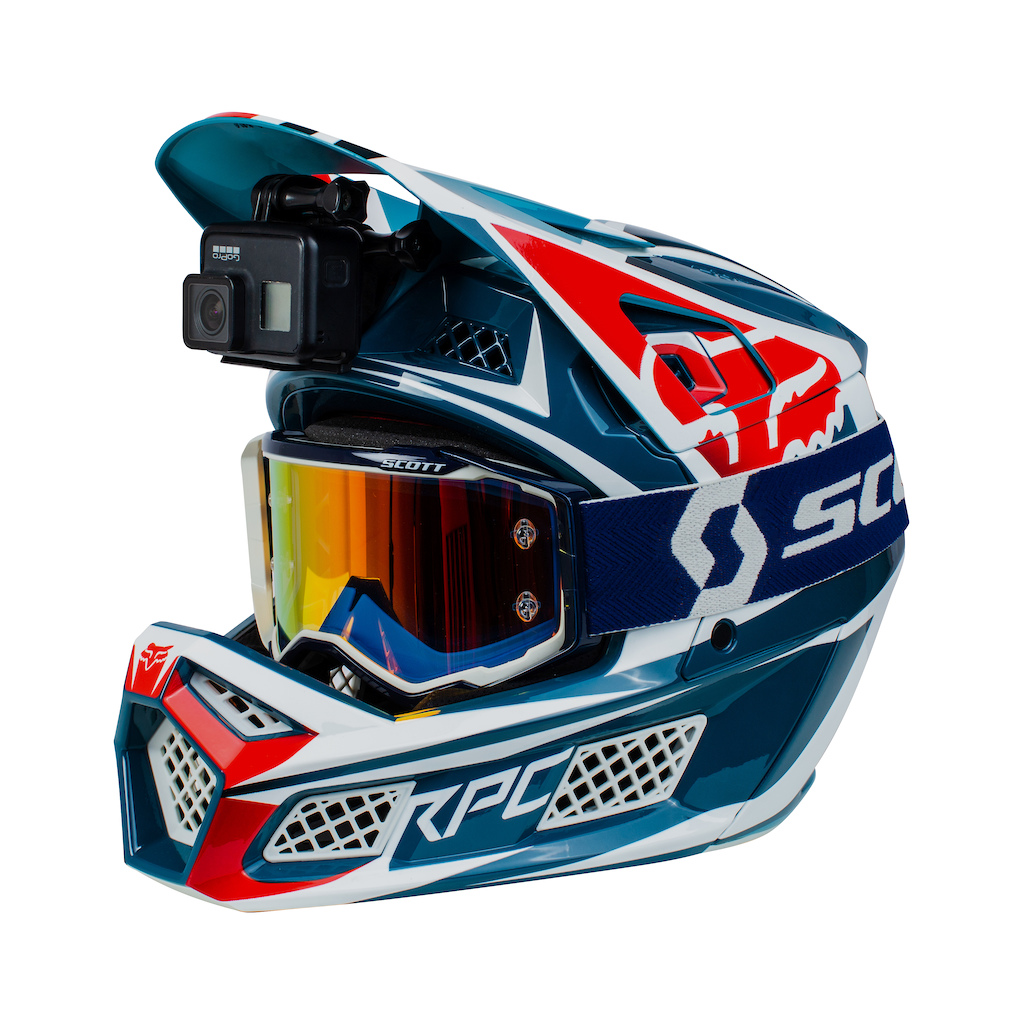 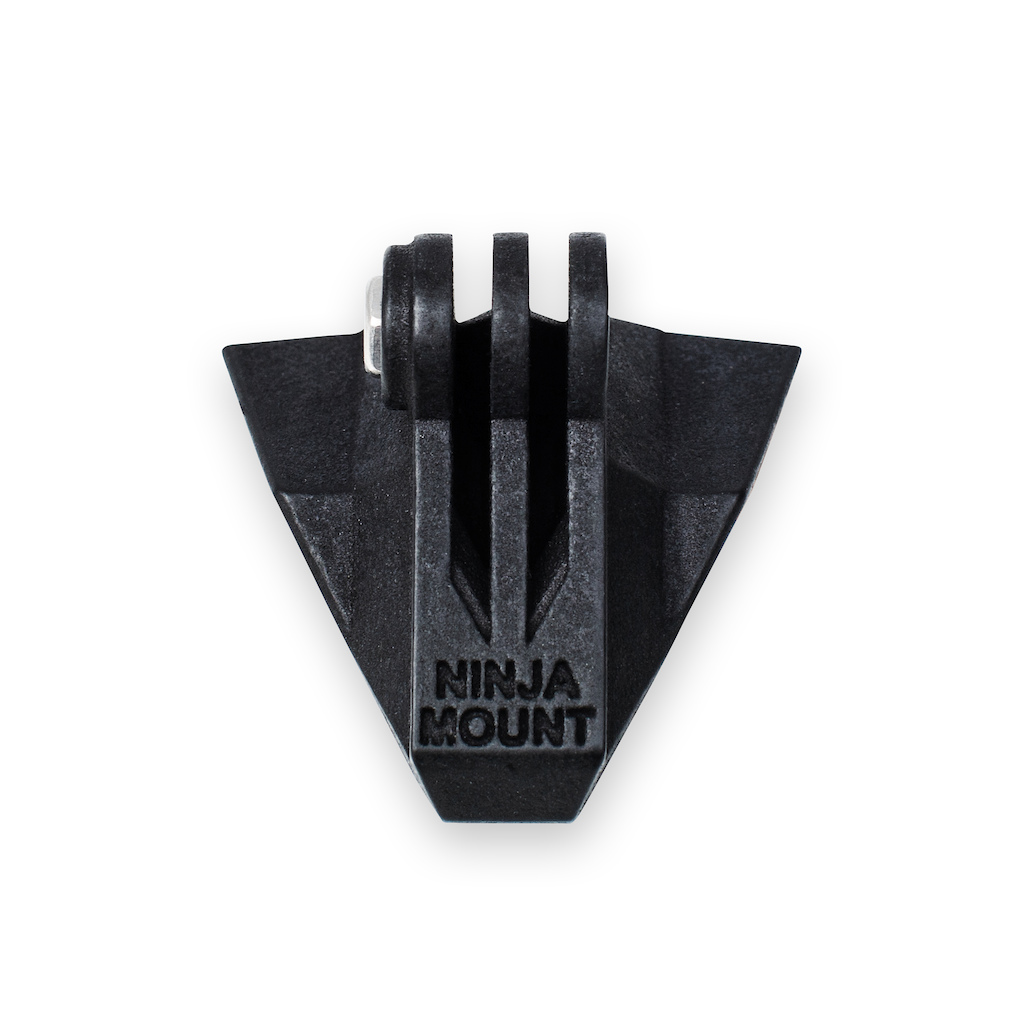 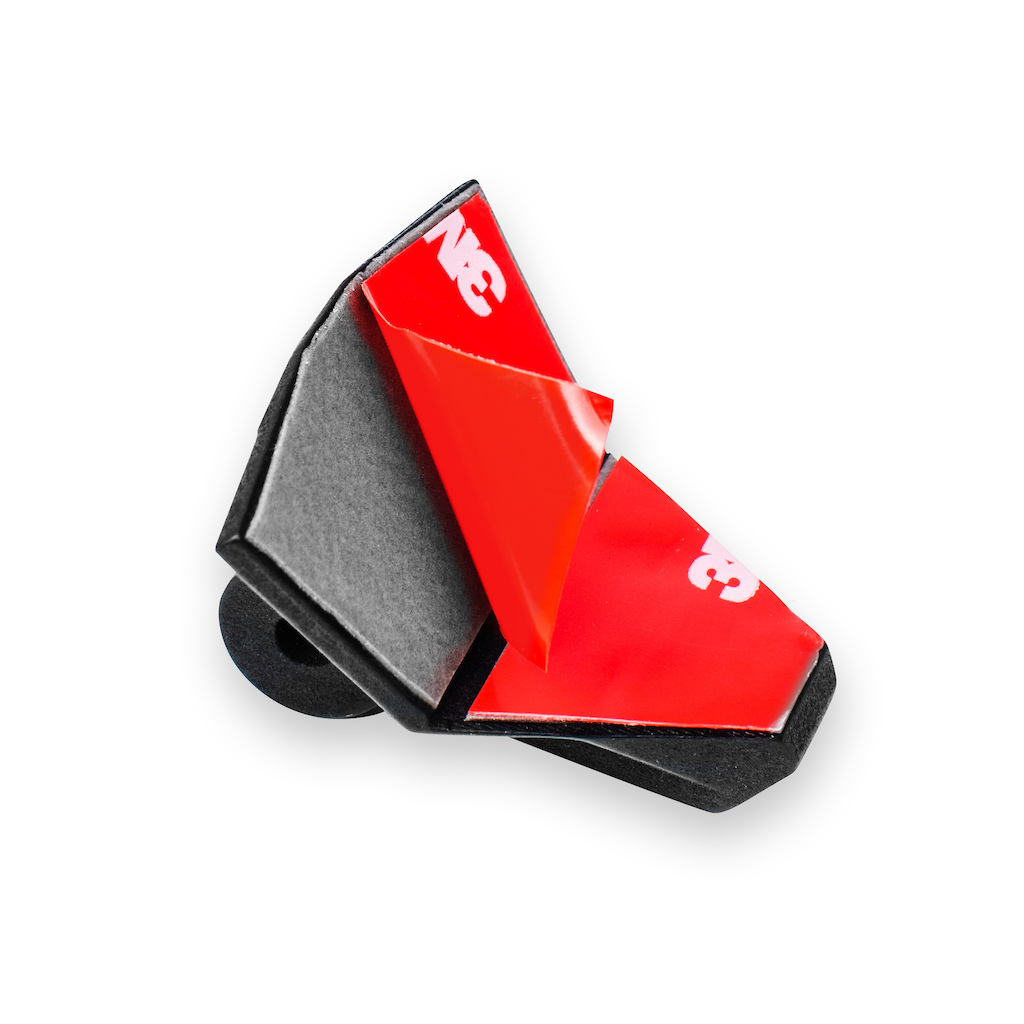 The design of the RampAdapter was also uncompromisingly designed for the Fox Rampage MVRS helmet. 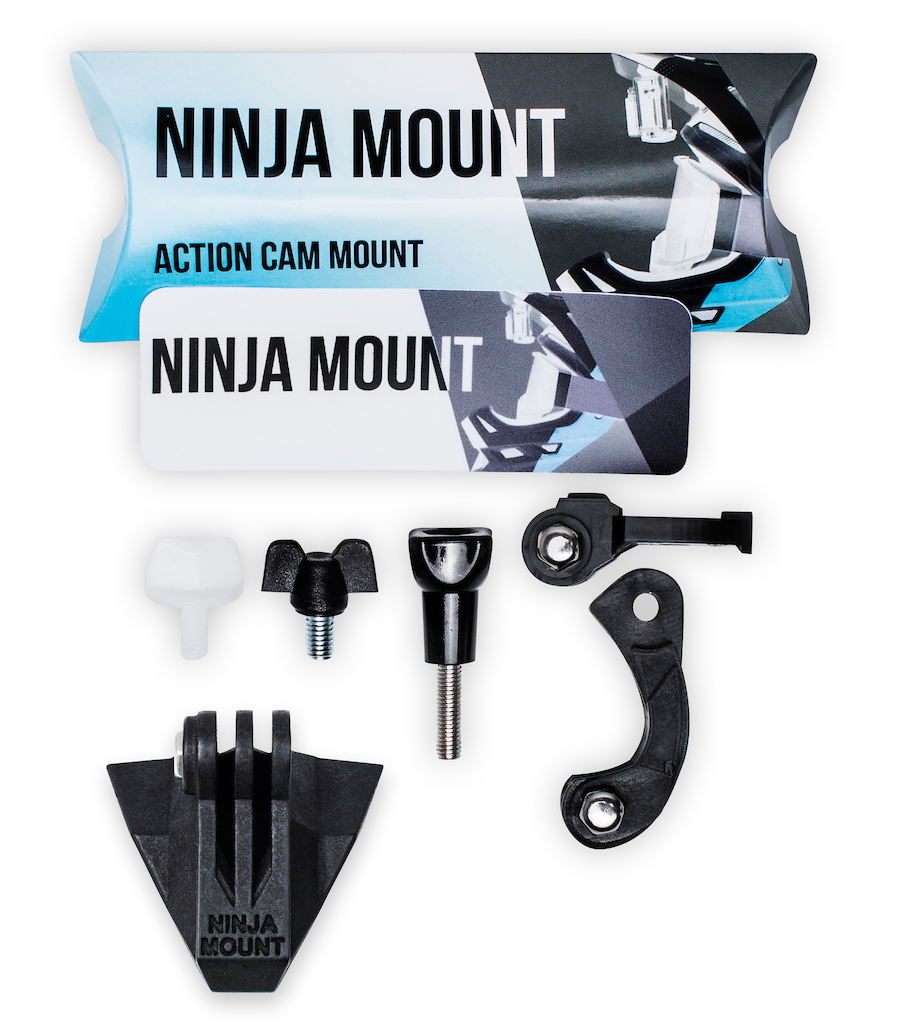 RampAdapter Set is available for 32,90€ at NINJA MOUNT online shop

You can land head first, smash your visor down, and rip your face up with the camera/mount. Having my nose reconstructed currently.

Better with a top mount that will snap off when impacted. Like the gopro/light mount that's included with Bell some helmets. The base is velcro/strapped to the helmet, but the cam mount will break away from the base in case of a hit.

Garpur44 (Jun 4, 2020 at 3:56)
@Grosey not nearly as bad as your experience (heal up soon mate) but i had a gopro on a ninja mount under the visor coming down Snowdon. Had an OTB and a bit of a faceplant and the impact ripped the gopro and mount straight out of my Carbon TLD D3 and completely ruined the helmet.

Had it not been in there I may have got away with just a visor replacement, won't be using one again

TylerG96 (Jun 23, 2020 at 13:37)
earlier this year a saw a a guy's face get ripped up from the same thing, fell face first breaking off the gopro and sending it into the nose. this was back in February

philv (Jun 2, 2020 at 9:29)
Maybe a daft suggestion but seeing as gopro is the most popular action camera why don't helmet manufacturers just add mounts as part of the features (could be optional version).

usedbikestuff (Jun 2, 2020 at 9:58)
Liability. You’d have to go out and do testing. Prove that adding that accessory doesn’t enhance injury. If it does and you accept that as a helmet company, just opens doors for lawyers to clean house

jomacba (Jun 2, 2020 at 10:19)
@usedbikestuff: Agreed, however to add to that, as much as GoPro is the most popular, its not the only version.
Adding in the added cost, as well as no association would be a pointless business decision. Have "built in" only creates headaches when dealing with broken parts ect.
Great idea in theory, but terrible when put into practice.
Aftermarket is better.
Take a look at the integrated stem/crown combos made for dual crown forks. Those sure took off didnt they???
That being said, The RPC version looks good. Still mounts to the visor, so should break away in a crash, which is actually safer than the factory go pro mount. Mind you, the magnets on the visor could probably hold up a medium-small child.

If the whole point of a helmet is to spread the load, a smallish solid square would focus a load. Granted it cant be worse then a pointy rocky but if i had the choice i wouldve ride with a pointy rock on my helmet. I only bring a gopro to get pictures of my son and i low sided on a berm and landed directly on the camera into my thigh and hobbled for a week, that wouldve been terrible if it was where my head hit.

muletron (Jun 2, 2020 at 21:58)
@usedbikestuff: 7 years is too soon? I wonder how many people have suffered similar injuries in that time.

takeiteasyridehard (Jun 2, 2020 at 23:15)
@DHhack: I thought it was more of an impact with a rock, rather than rotational injury. Didnt his brain swell up? Not his neck? I dont think the camera placement had anything to do with the injury in his case...or am I wrong? Answer me keyboard warriors...I dont have time to look it up....

philrossnz (Jun 3, 2020 at 1:10)
@takeiteasyridehard: I thought the gopro punched a hole through his helmet

JoeRSB (Jun 3, 2020 at 6:18)
@takeiteasyridehard: There is a lot of rumour and speculation on what exactly happened, I heard that the camera was somehow bolted to his helmet or fixed in a way so that it didn't break off when he impacted a rock, which caused the issues.

If you use a conventional mount with 3M tape it will break off and not be any more dangerous. There are always freak accidents though.

Yaan (Jun 3, 2020 at 12:16)
@DHhack: Exactly, UCI and most local race organizers do not allow helmet mounts.
A lot don't even allow a chesty for the same reason.

DHhack (Jun 3, 2020 at 13:31)
@takeiteasyridehard: off piste crashed and hit his head on the GoPro mount on a rock. Broke the helmet. Still a vegetable (most likely).

Kimmersenior (Jun 2, 2020 at 21:44)
58 € to get the basic mount and the required profrane adaptor ? You’ve got too much money if you think that’s a fair price for €4 worth of plastic. It never ceases to amaze me how companies assume bikers are stupid enough to fall for this kind of overpriced gear. These guys are the kitsbow of helmet mounts.

jason475 (Jun 3, 2020 at 4:33)
I thought the helmet GoPro fad was over with? Great, more POV bike videos so I can hear someone say "Nice!!" all the way down the trail. Because "nice" is the only word in a mountain biker YouTuber's vocabulary to describe anything. send it.

Matt76 (Jun 3, 2020 at 4:28)
Must admit I would not put a camera on a helmet. Helmets are not designed to take an impact with a camera in between the area its impacting and the helmet itself. There was dicussion around Michael Schumachers accident that his helmet camera actually contributed towards his head injury. More research is needed on this to deem whether its safe or not.

ccrida-pnw (Jun 4, 2020 at 22:27)
I sweat way to much to use chin mount, the video would look like I'm underwater. I have a cheap aluninum handlebar mount that offers great POV, but leaves the camera a bit vulnerable if you ride hard. I preferred my helmet mount just because I pitch my bike way more then I crash land on top of my head, but after reading the Schumacher comments, I've got to reconsider if that catostrophic risk is worth a few hundred bucks...

NINJA-MOUNT (Jun 3, 2020 at 11:56)
All injection molded parts from NINJA MOUNT are produced in Germany, the 3D printed elements for the two new products are manufactured in the Netherlands. The mounts are assembled in sheltered workshops near Munich.