Nasenfuchs mikelevy's article
Nov 13, 2012 at 10:34
Nov 13, 2012
EXCLUSIVE: DVO Emerald Inverted DH Fork - First Look
@ DVO - I really like your enthusiasm and your approach towards us all. Sadly this is uncommon for today's manufacturers. Wish you all the best. As stated above, I really think this whole controversy about rigidity / stiffness is gone into an excess. People always claim that stiffness is a good thing - but at this point I really think that stiffness is a marketing thing. I work in a big bike shop, hence I've ridden a couple of forks in the last few years. This includes the 40 - a fork everybody raved about for beeing stiff and having superior damping performance. Freshly serviced the damping was good, but you had to service it (and have to) too often. I also quickly discovered that the stiffness of the fork had certain disadvantages, especially on rocky and rooty trails, where the fork hadn't any forgiveness and you could really feel the head shake. Same thing applies to the "new" 35mm Boxxer - I loved the old 32mm-one, but couldn't get along with the new one - but it was mostly because of the damping. Since I've got my Dorado, - best production fork today, hands down - I think different. At first, I had complaints about "flex", but quickly discovered that the fork was forgiving, yet it turned precisely even in ruts and rocks. Since then lots of people asked me for a "flex-test", putting my front wheel between their legs and turning the handlebar. Of course, there is a lot of flex if you do this - but it's not an issue on the trail, where you can't feel it. People never believe that this flex is a good thing an rave about the fork being soft and unridable. I often offer a test drive, but people refuse it. If somebody rides, he agrees that there is no noticeable disadvantage with flex on the trail. So, as long as the right-side-up guys don't believe in less rigidity, you guys at DVO have to build this torsion arch on your forks. It makes them look weird, and I personally don't believe in the necessity of it. You see, I'm an USD-diehard.

Nasenfuchs mikelevy's article
Nov 12, 2012 at 13:38
Nov 12, 2012
EXCLUSIVE: DVO Emerald Inverted DH Fork - First Look
Don't really like the look of this torsion arch. I certainly don't see a need for this. I'm riding a Dorado since 2010 and I have absolutely no complaints about rigidity, this also applies to my dirtbike - and this thing goes much faster and jumps much higher and further than my DH bike. If a motorcycle don't need this, my bike doesn't need it either. I think everyone is gone crazy about rigidity since the 40 came out, but sometimes a lil' bit of flex is a good thing when it gets rough. 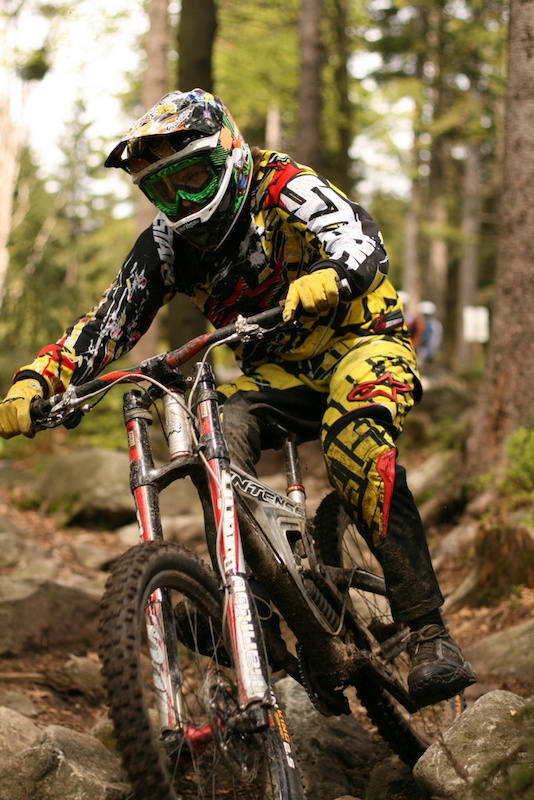