Like, back in 2009, for example. Coming on the heels of 2008, which like 2020 was a crap-tastic year full of financial meltdown, political brawling, and general malaise, 2009 was a year full of hope and promise.

Barak Obama began his first term in office. Captain Chesley “Sully” Sullenberger had just landed US Airways flight 1549 on water. It was a literal miracle. Danny Macaskill dropped his first viral edit and broke our collective brain. Steve Peat broke our collective heart when he finally climbed atop the tallest box in Canberra to don the rainbow jersey that had eluded him for so long.

And at the peak of 2009, this kooky little bike brand from California dropped a 130mm travel 29er mountain bike called the W.F.O. 9. 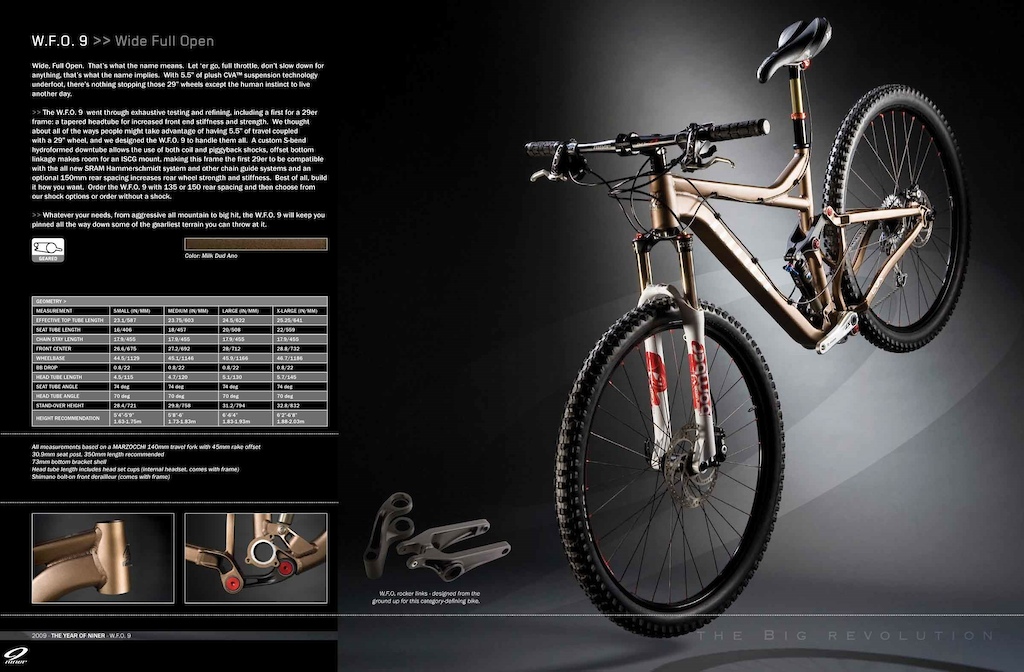 Like a lighthouse ray of hope and inspiration cutting through the fogbank of dull, 26er dominated mountain biking doldrums, not to mention Tour de France doping scandals, this exotic wagon wheeler promised shreddy, dirt-slaying superiority for those riders progressive enough to embrace it. The bike industry at large wasn’t quite sure what to do with this revolutionary bike, but it marked an inflection point, and as cliché as it might sound, nothing has been the same since.

In 2009, this is how we described that first W.F.O.: “Wide, Full Open. That’s what the name means. Let ‘er go, full throttle, don’t slow down for anything, that’s what the name implies. With 5.5” of plush CVA™ suspension technology underfoot, there’s nothing stopping those 29” wheels except the human instinct to live another day.” 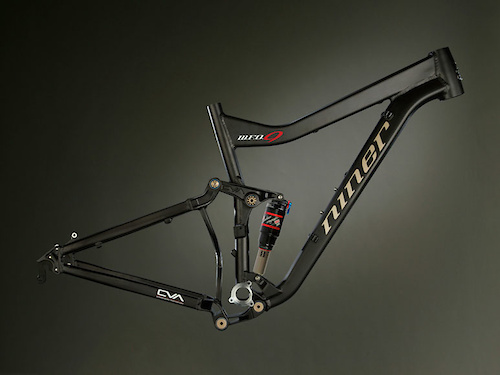 Not unlike a new personality ascending to political power, whether or not that first W.F.O. 9 delivered on its promise is debatable. For that matter, did our second generation WFO 9 do any better? We’ll leave that to our sport’s historians and archivists.

The real question is, how did such a profoundly forward-looking mountain bike emerge from the loins of Niner Bikes? In 2009, we made one of the world’s first long-travel 29ers. But back then, we were more of a foster home home to spandex-clad, neck-bearded, weed-smoking weirdos on 19-pound, fully rigid singlespeed bikes, racing awkwardly through the night in the beer-fueled, 24-hour suck-fests that people thought were cool back then.

In fact, the W.F.O. 9 origin story is wrapped into the very inception of Niner Bikes itself. Founder Chris Sugai started the company in 2005 as an antidote to a life running a window-tinting business. He dreamed an alternative future, one filled with the fun of Formula 1, poker, and mountain biking and founded on the premise that big wheels are better all the time and everywhere.

Niner’s first frames on the market were rigid, scandium, single-speed 29ers that washed up against the skeptical shoals of a wary riding community during the 2005 Sea Otter. Yet even then, Chris and the Niner team’s 29-inch wheels were already in motion to bring a long travel bike to market. An upwelling of worldwide big-curiosity had begun, and Sugai knew that a full-susser was not optional – it was mandatory. With his fervent desire to thrust 29ers into the mainstream, and his unwavering certainty 29ers were better for all bikes and all terrain, Chris and his team set out to build a full-squisher. 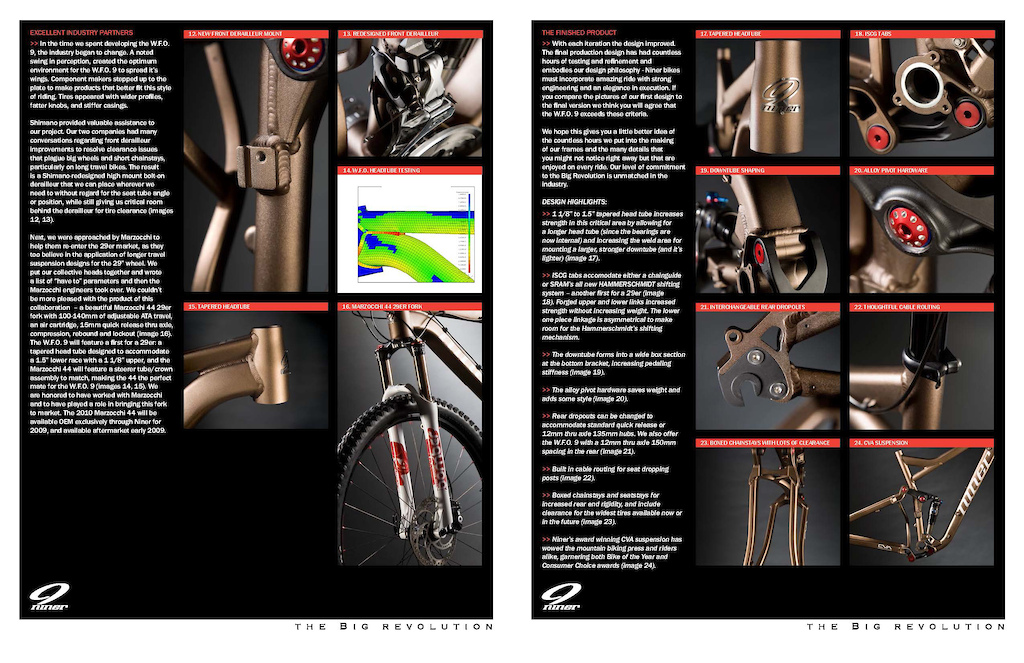 The first W.F.O. 9 was a two-pronged attack on the 26” trail bike convention of the day. The primary focus of the project was to develop Niners patented CVA™ suspension design. The second, and equally important, mission was to encourage industry partners to ramp up production of all the various components that would foster the proliferation of big travel 29’ers. Back then, even stubby 100mm 29er forks were hard to find. 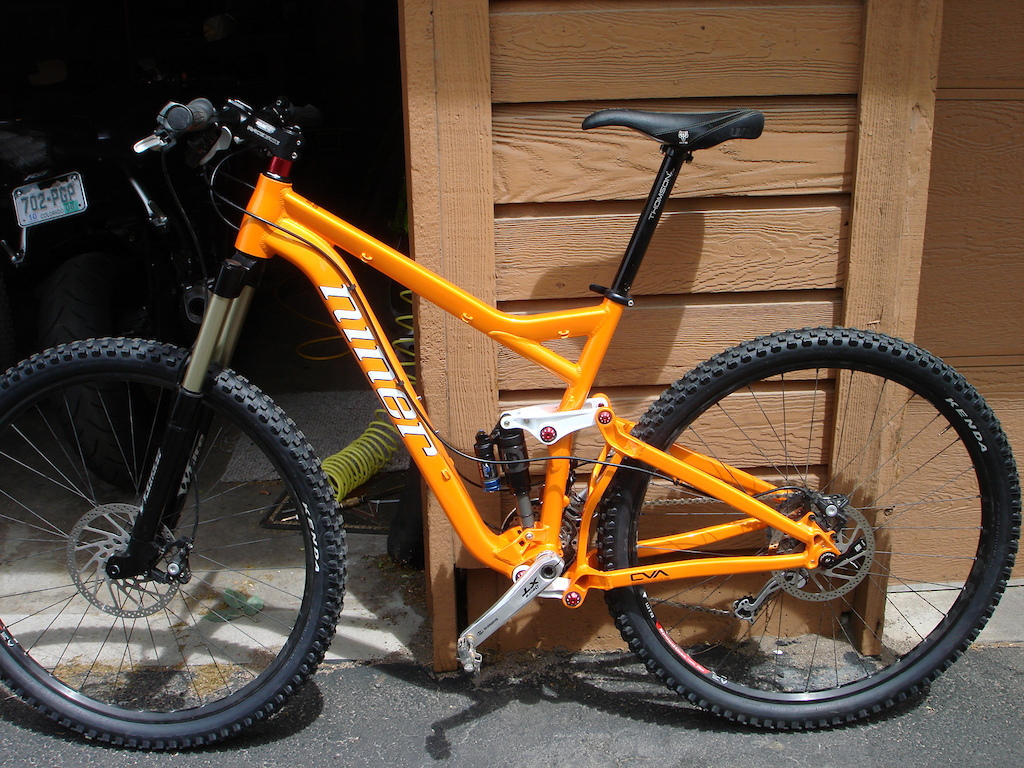 The first ridable W.F.O. 9 test mules were welded as early as 2005. Subsequent iterations rendered digitally and analyzed using nascent FEA programs saved countless hours of physical prototyping and testing. And a revolutionary, 29er-specific suspension design and purpose-built components weren’t enough. Niner’s objective during those formative years was a fundamental change in the way 29” mountain bikes were built and perceived.

When the W.F.O. 9 was revealed to the public in 2009, it wore a host of unique and progressive features. CVA suspension. 5.5” travel. Replaceable rear dropouts in a choice of 135 or 150mm spacing. A tapered head tube. ISCG tabs. SRAM Hammerschmidt compatibility. Curved down tube. Asymmetric, offset pivots and linkages. Sure, the geo looks dated by today’s standards, but the bike was progressive for its time.

While Chris had utter faith in the wheel size and the application, the broader MTB community responded with a mix of skepticism and praise. Remember, this was 2009. The first production hardtail 29’ers had only come out 3-4 years prior.

“At the end of the day, our testers had mixed feelings about the bike. The traditionalists didn’t see enough gains to make up for a loss in maneuverability; the believers wondered why it hadn’t been done before.” - Bike Magazine.

“Steering was responsive as well and the slack-ish head-tube angle felt natural and comfortable, allowing me to lean back a bit and enjoy the swooping descents.” – Singletracks.com

“I’ll catch some hell in some circles for giving the thumbs up to the wagon wheels but I'd be lying if I didn’t admit to have more fun on the WFO than I’ve had on most trail bikes lately.” – Sicklines.com 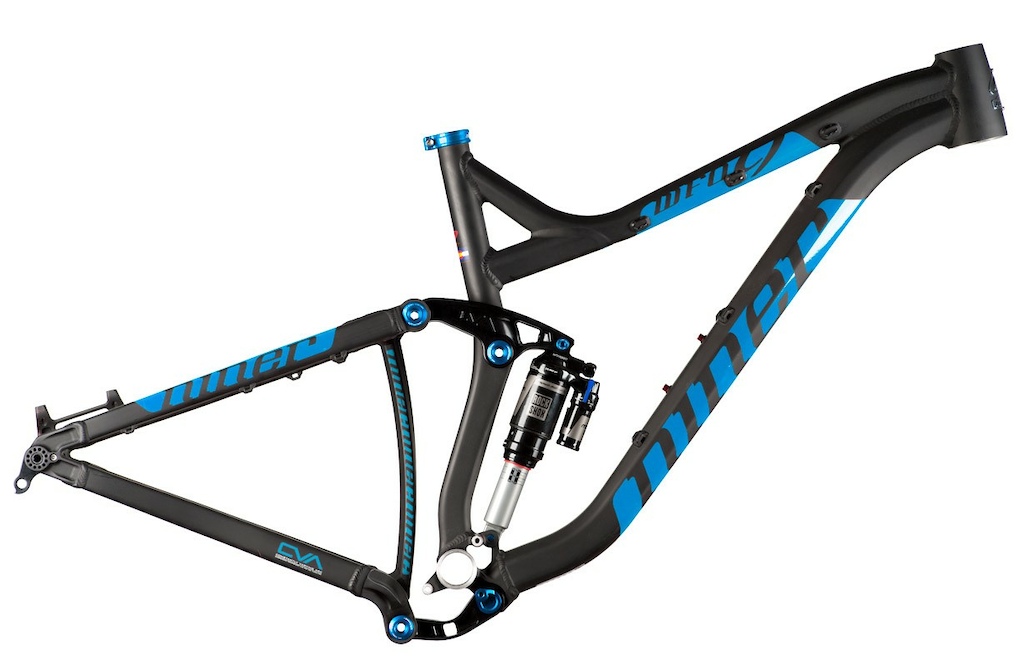 In 2014, the second generation WFO went through a serious refinement to an almost starting-from-scratch rework. The tubes and tube shapes were more dialed and robust while simultaneously dropping 300gr along the way. We revised the rear triangle of the bike with post mount disc brake mounts and a light, stiff, seat-stay yoke. The geometry of the entire frame was updated with a steeper 75.5 seat-tube angle, shorter 455mm chain-stays, and a slack for the time 66.5-degree head tube angle. The travel number was also bumped from 5.5in or 140mm to 6in or 150mm, further pushing the bump-stopping boundary of this second-generation bike. 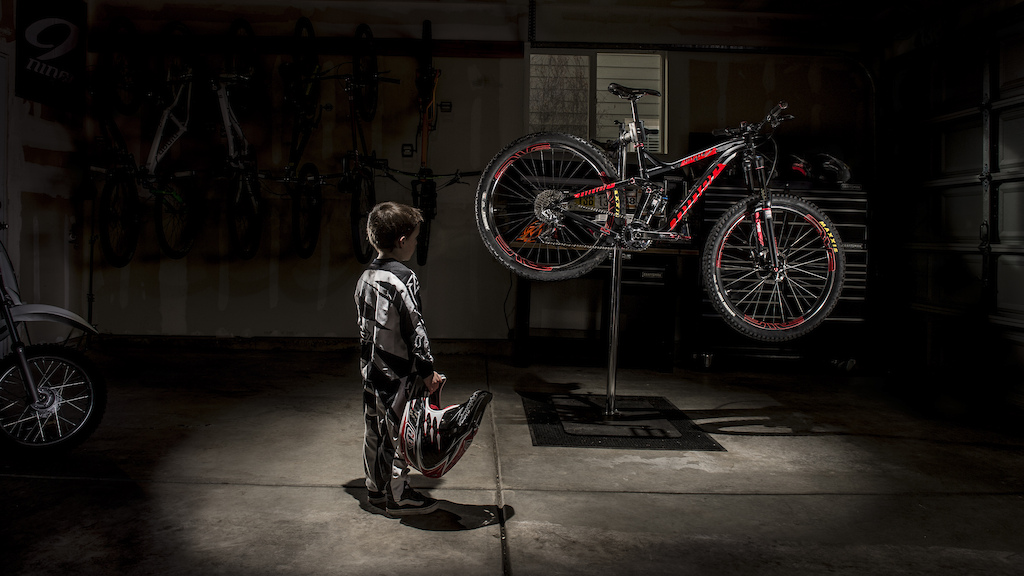 Between 2009 and 2014, as Niner Bikes had entered proverbial puberty, enjoying a heady, hormone-fueled growth spurt, the buzz around big travel 29” bikes became deafening. That cautious upwelling of early adopters had turned into a tidal wave of riders ready to ditch their 26ers. And the WFO scratched a long-travel itch in ways that few bikes at the time could ever do. 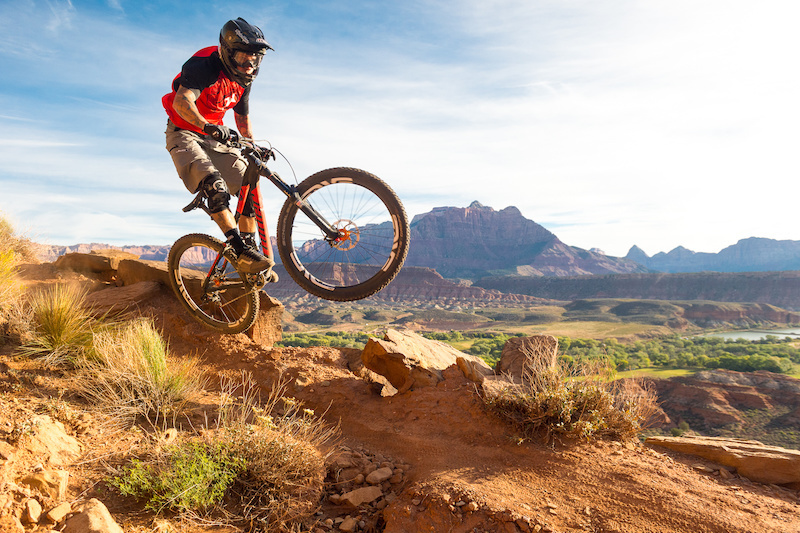 “Simply, the WFO carried more speed with less effort than my 26-inch bike as proved by the always-objective stopwatch.” - VitalMTB

“It felt like a runaway train, only I wasn’t stuck on one line and never felt like a mere passenger. Finally I’d found a long-travel bike that really taps into the inherent stability and speed of 29in wheels. I was absolutely buzzing.” – MBR.UK 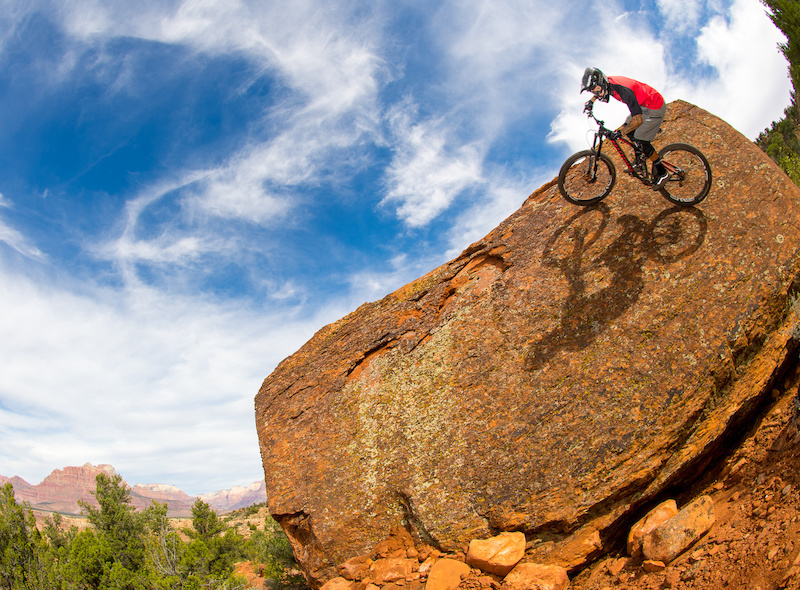 Looking back at 2009 gives us all the feels. We rode bikes. We watched movies like Avatar, The Hangover, and The Twilight Saga: New Moon. We listened to “Love Story” by Taylor Swift, “Single Ladies” by Beyonce, and “Set to Fail” by Lamb of God. We watched, waited and hoped as a global recession bottomed out and embarked on a plodding march toward recovery.

And a very special, very prescient bike, the W.F.O. 9 was born. Did it change history? That’s debatable. Did it bring hope and joy to a downtrodden community of 29-er disciples? We like to think so. 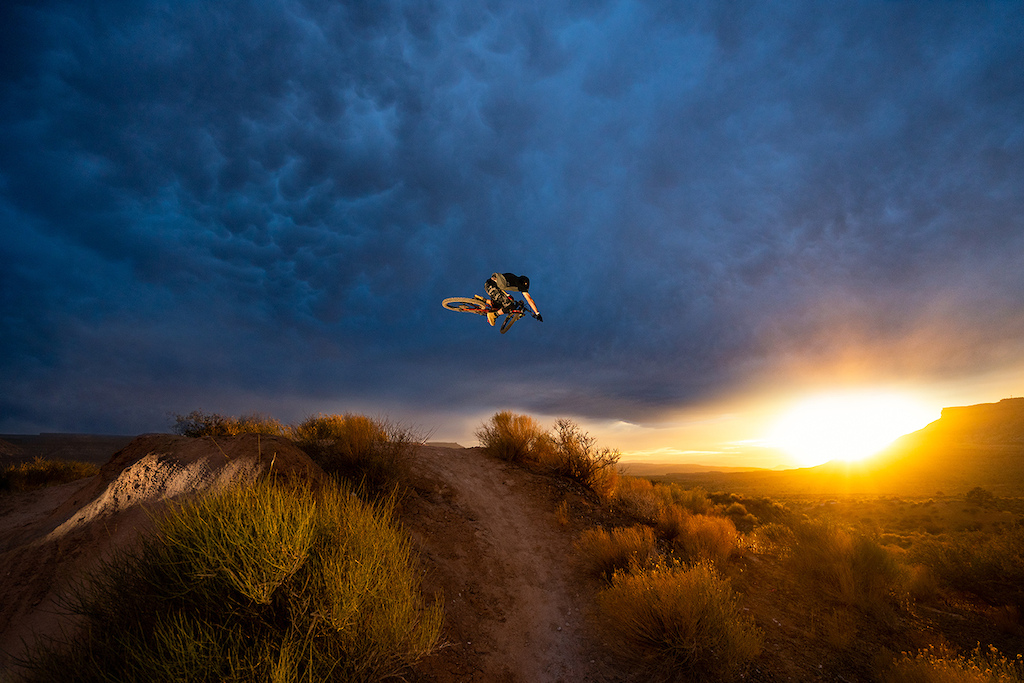