Video: How to Run Out of Daylight while Mountain Biking in 'Sandbagger's Choice'


My first ever visit to the Chilcotins was an exercise in having my ass handed to me. Josh Hall and Chris Clark were world-class fit, and I thought I was ‘close enough’ to hang. I was wrong, and the weather didn’t help me out. So when they returned a couple weeks later to complete their planned route without me, the ride stuck in the back of my mind.

Six years later and many, many trips to ride in South Chilcotin Provincial Park, and I have become intimately familiar with the mountain ranges, routes, lakes, and streams that make up the region, and the distances between them that compound to a huge scale. Late last summer, I finally felt ready to take another stab at that first ride—if only to get it out of my mind. I called on Zanny Venner and Joel Ducrot to join me on the big ride… and what better way to sandbag our chances of success than to bring a camera and tripod to tell the story?

For anyone interested, I’d highly recommend our approximate route (Relay>Elbow>Deer>Windy>Lick) as a bikepacking trip with one or two nights camping along the way. For most riders, I would specifically not recommend it as a day trip. Even with a detailed, first-hand knowledge of the route, a clear understanding of and preparedness for the consequences of coming up short, and a very high tolerance for discomfort, pulling off a ride like this deep in the backcountry is on the ragged edge of 'dumb.' 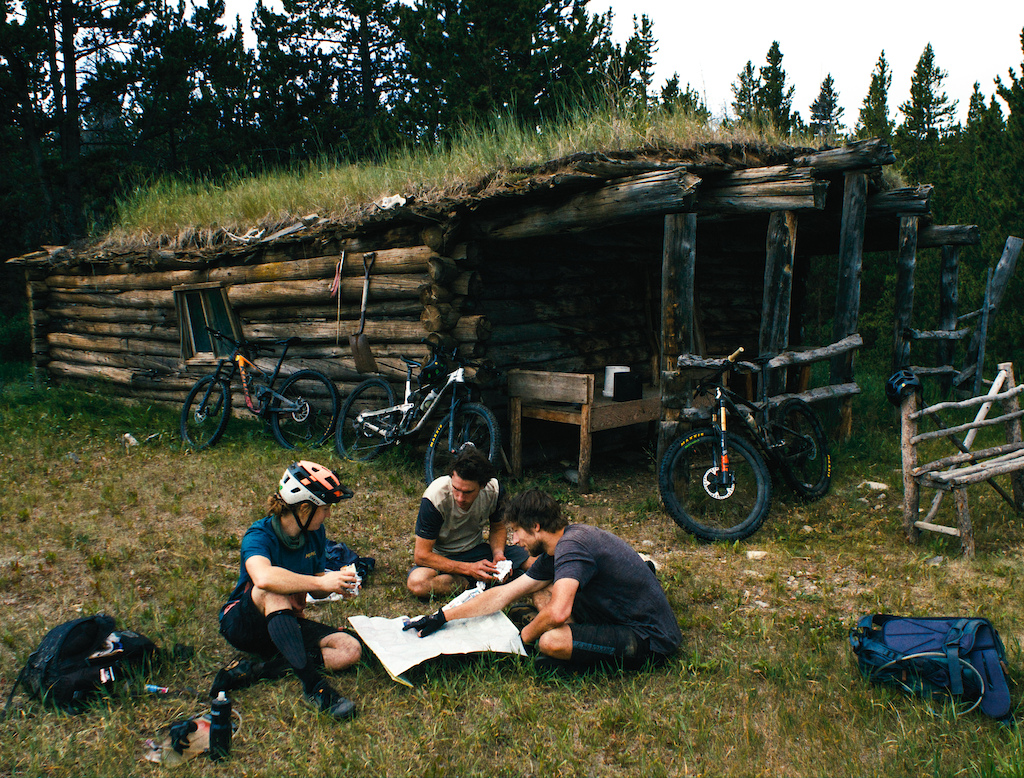 Zanny, Joel, and Woj looking at the map, more for the comedy of seeing how far they are from the car than to figure out how to get there. 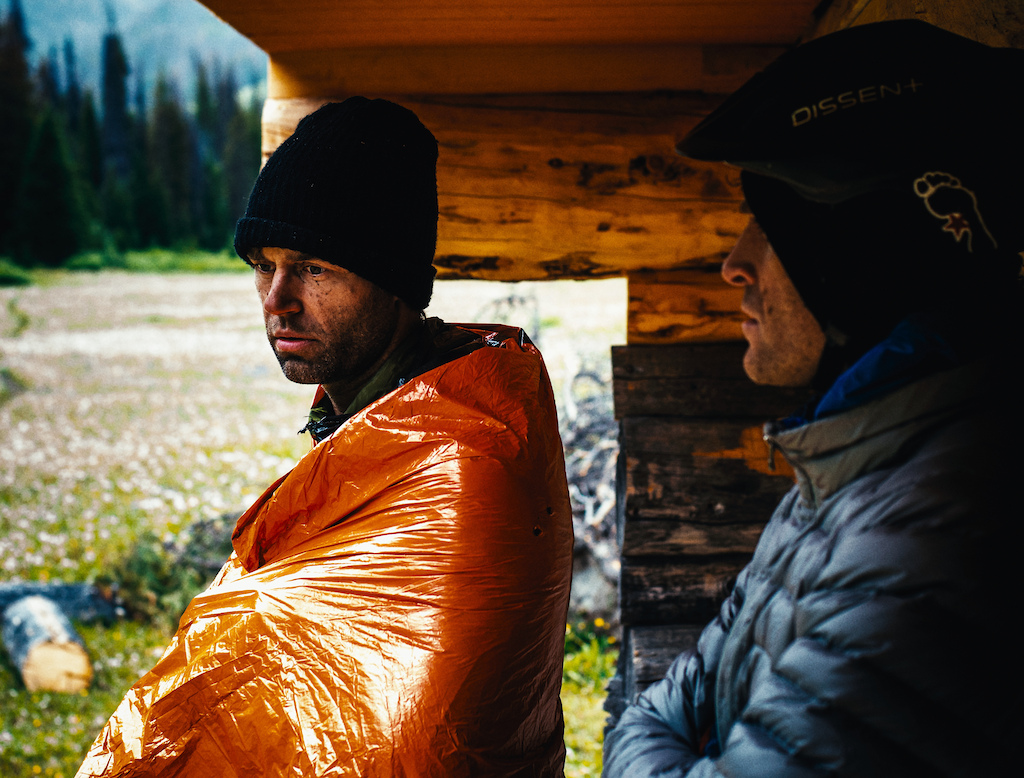 Chris and Josh, cold, wet, and a loooong way from the car. 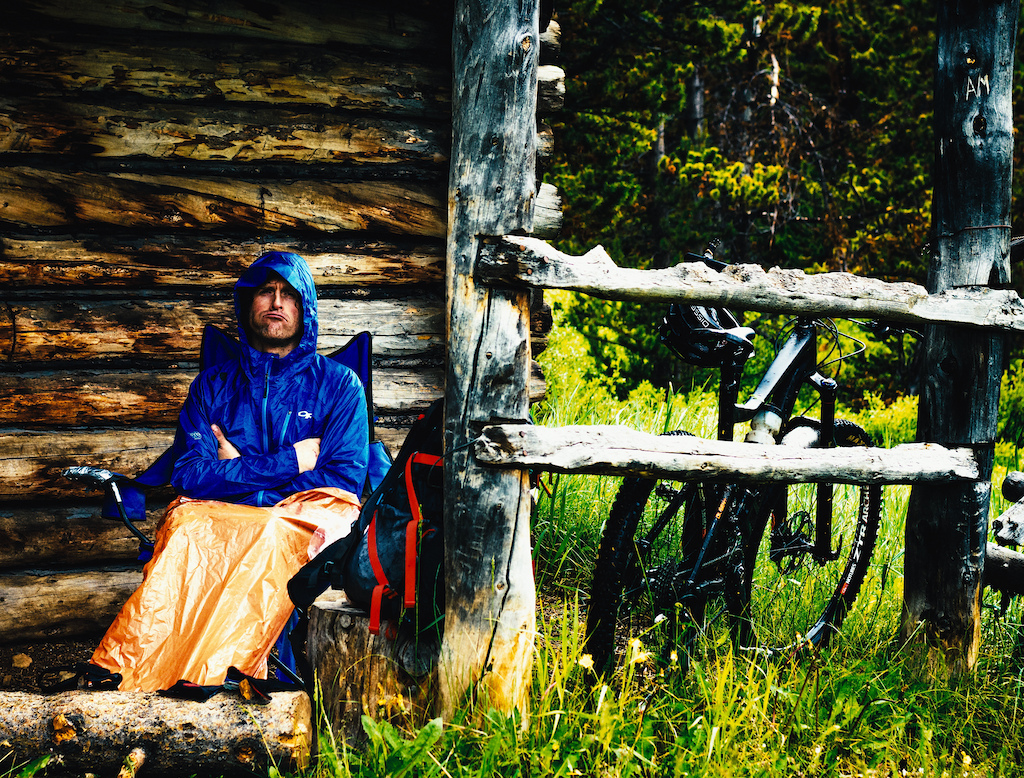 Josh will rip your legs off, even when he needs a space blanket to warm up. 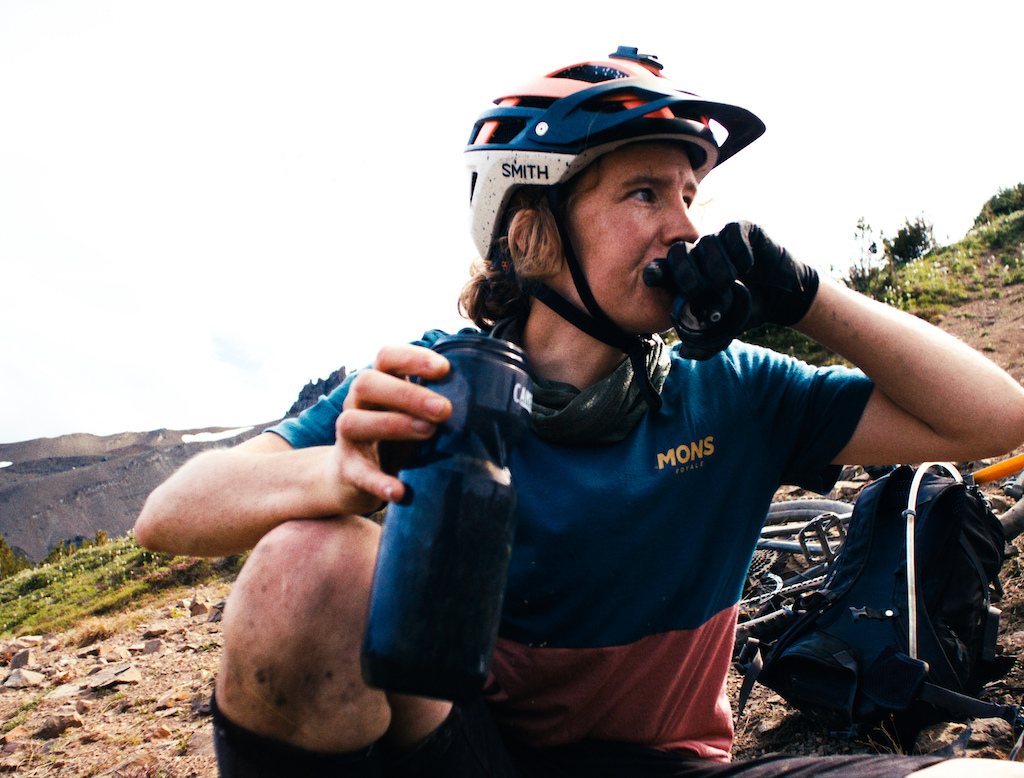 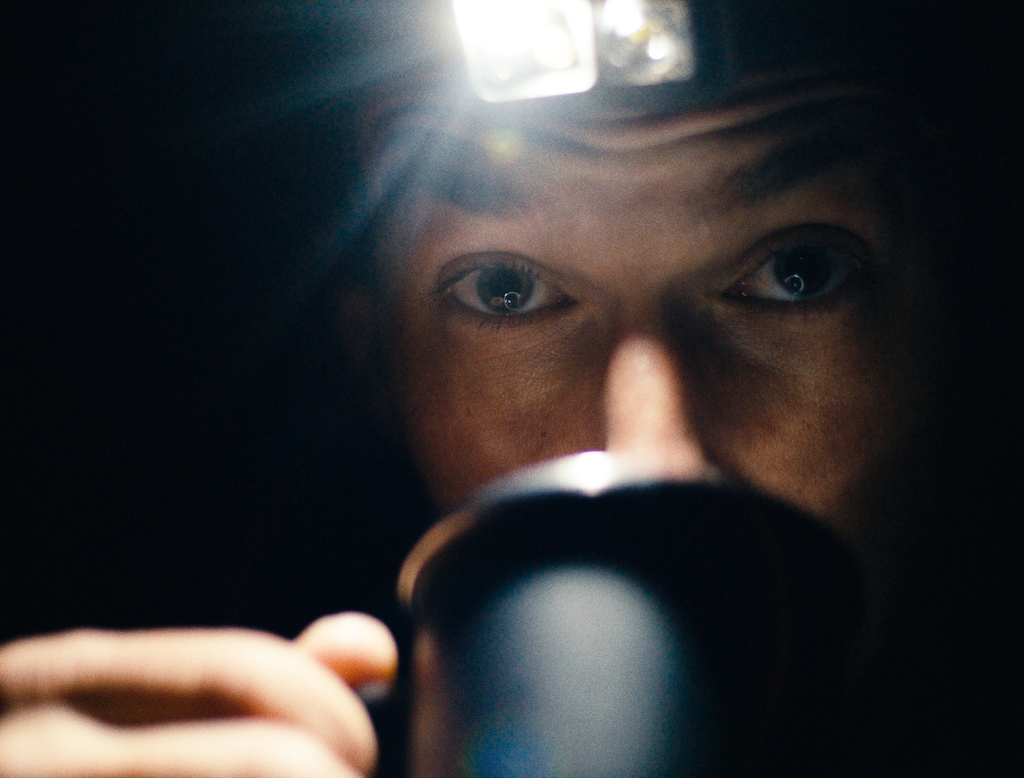 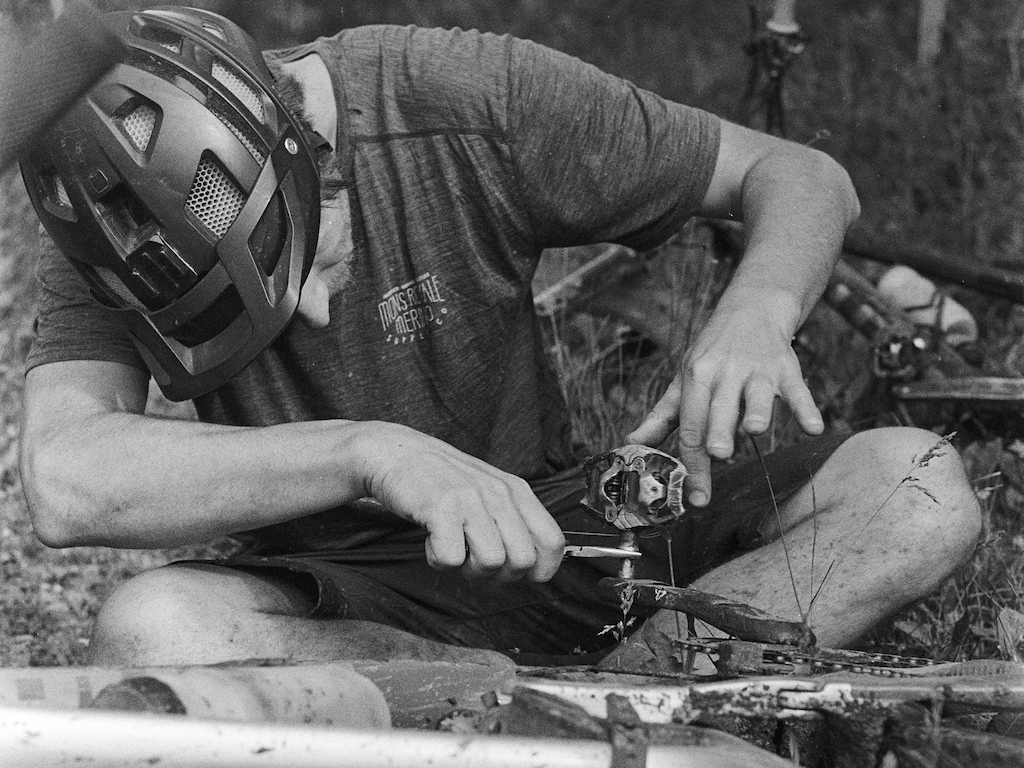 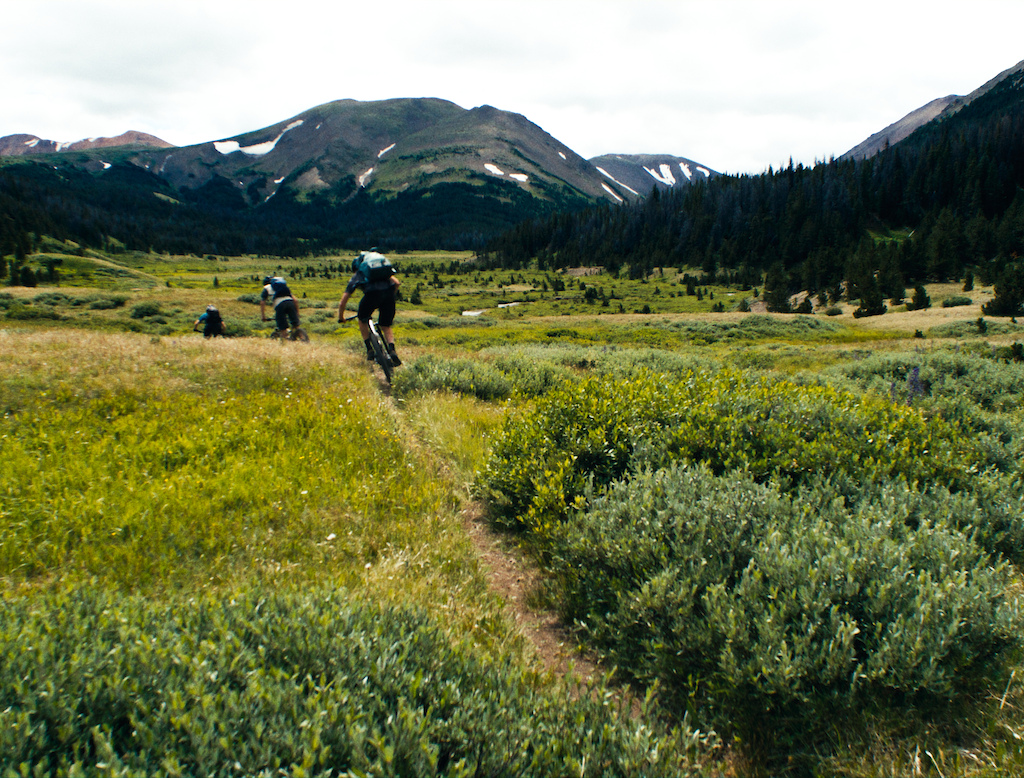 All three goofballs riding away from the camera to get the shot... only to have to come back for it. This behaviour didn't last long. 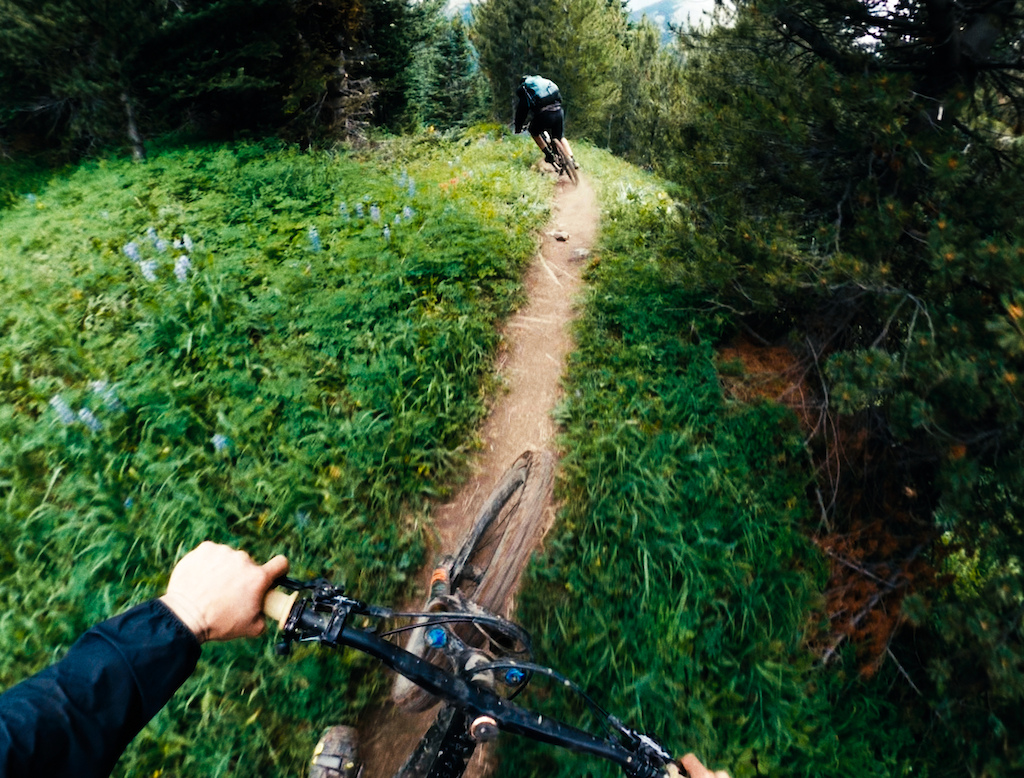 Joel following Woj on Deer Pass, one of many looong descents.
Woj would like to acknowledge that this ride took place in Big Creek and South Chilcotin Provincial Parks, which are really the unceded territory of the Tsilhqot'in, St'at'imc, and Secwepemc First Nations. We're lucky to be able to respectfully ride the trails and routes in those parks, that have been used by those First Nations for long before parks were ever a thing.

Something I always wonder when I see these kind of films or photos from BC or other parts of the Rocky Mountains in the US is how are the trails not all overgrown? I've seen several films like this one where they tell use that they're wayyyy out far from civilization but the trials are clear and not full of grass or bushes growing over or trees fallen during winter or whatever. Who clears them? Does the vegetation in teh Rockys just respect he trail?

I'm comparing this to the netowrk for 10-12 trails nearby my town in Norway that needs strimmed on a regular basis and often have windfall or some of the trails above the tree line that don't get used much and have the heathers growning over them.

PeterWojnar (Apr 27, 2022 at 7:14)
The blowdown and vegetation every year is huge! Some of the people who cherish these trails the most put in a Herculean effort every spring to clear hundreds of trees and cut back the brush—I’ve helped with a few trails and often, 10-15km of trail takes a group of 5 a full day with chainsaws and clippers. It’s a big volunteer effort by people who care.

Two-planker (Apr 27, 2022 at 11:11)
Many of these trail were not originally intended for mountain biking. The network of these trails are for horseback & cattle access and were established for ranching purposes. The history of this region is really interesting. Back in the late 1800's it was not uncommon to see cattle drives all the way from America to this region.

freeinpg (Apr 27, 2022 at 11:53)
"Finding a new expereince in framiliar terrain"...what an awesome insight and a wonderful watch. I spent 3 days riding the Chilcotins in 2020 and it's something I will never forget! Couldn't recommend enough..bring extra shoes for creek crossings is my sage advice!

Antoncor (Apr 27, 2022 at 3:13)
I think this type of rides make more sense when you do them as a Marathon race, in Spain we have a lot of them and for a lot of people they are the highlight of their year. Having a few checkpoints with water and food is very helpfull and if someone has a crash or something else happens there is always someone ready to help you. Other than that it's still an Epic ride and a little bit of adventure.

mammal (Apr 27, 2022 at 11:24)
I did this same ride in a 12hr span with one of my buddies. It's definitely ambitious, and we definitely ran out of light. Left our tents at the Gun Creek access at 9am (late arrival the night before) and arrived back at almost 9:30pm. It was so dark we could hardly ride the last km, it was basically walking pace.

AndrewMacNaughton (Apr 27, 2022 at 8:00)
Really awesome stuff. Love that area. Love the quote about unfamiliar adventures in familiar places. Thats what that place means to me as well.

owenbfoster (Apr 27, 2022 at 10:59)
Gave me the feels... that weird itch to get really hungry, really tired, and awe-struck, very far from home. Sounded like an epic ride and was really well captured!

Corbanblamp (Apr 27, 2022 at 3:14)
What are the numbers in this ride? Elevation gain and distance? Pretty awesome video

paulskibum (Apr 27, 2022 at 8:14)
How do you fend for yourself in the wilderness without a pack full of everything you need to survive? Just carrying a One up tool and a spare tube and a clif bar aint gonna cut it.

Thisisscott (Apr 27, 2022 at 8:22)
@paulskibum: I think they mean that when people go bikepacking the strategy is to keep as much on your bike as possible. Carrying a big pack is hard on your body, especially your sit bones and shoulders, compared with keeping it on your bike.

PeterWojnar (Apr 27, 2022 at 8:28)
@Thisisscott: @Couleecruise Carrying a big pack IS hard on the body, compared to keeping weight on your bike. But it doesn't affect your bike's handling as much, so if you give a f*ck about the descents, you keep the weight on your bike to a minimum.

It is hard on the sit bones, but so is biking for 19 hours without a pack. If you want to do big rides, you'll accept some level of discomfort to do it (first aid, survival shit, gear repair, warm clothes, and FOOD adds up quickly. Cameras, lenses, and tripods also add up quickly.) If you're unwilling to accept the discomfort, just go for shorter rides.

KennyWatson (Apr 27, 2022 at 9:12)
I did my first multi day chilcotins trip last year.
I was quite worried about getting saddle sore in general as they were much bigger days than I'm used to and I had a largish pack.

I was totally fine and I think the reason was that in reality you don't spend a whole ton of time actually sitting in the saddle, at least relatively speaking.
It's a lot of up and down and a lot of hike a bike, so your ass gets regular breaks.

Most people on multi day trips have 30-40L packs. Like anything this just depends on your packing style/personal preference/risk tolerance for things like bad weather.

flipfantasia (Apr 27, 2022 at 11:12)
I did a 2 night/3 day trip end of last summer, didn't have a ridiculous amount of stuff on my bike (Bar roll with sleeping bag/pad, small frame pack, 6l seat pack) and a 23L backpack, next time I think I'd go for 30L pack and slightly less on bike. Still lots of hike a bikes and ultimately I think it's easier having stuff in a pack versus strapped all over your bike, at least in terms of SCMP riding.

KennyWatson (Apr 27, 2022 at 11:21)
@flipfantasia: sounds about right.
I packed a lot of "spares" like 5 sets of chamois shorts for 4 days. I should have brought two and washed em.
I didn't bring riding pants and it snowed. That was a mistake. Riding in shorts sucked.
I also hated only having the option of crossing streams in bare feet (didn't like the idea of a cut foot or rolled ankle in the middle of nowhere) or getting soaked feet.
Next time I'll bring some sandals or water shoes. Quite a bit of extra weight/bulk but for me that'd be a very nice creature comfort.

PeterWojnar (Apr 27, 2022 at 14:12)
@KennyWatson: should have brought zero! Chamois = taint death a*shole casserole, I don’t know how you chamois-wearing masochists do it.

PeterWojnar (Apr 27, 2022 at 14:13)
@KennyWatson: as for creeks… just commit and get your shoes wet. Who cares, it isn’t worth the effort or time to remove them all the time

KennyWatson (Apr 27, 2022 at 14:23)
@PeterWojnar: yeah I don't normally wear them I was just super paranoid. I won't bother next time!
I wore my shoes through, with wool socks it was not too bad, and in warm weather it'd be fine, but again, it snowed several inches on my trip. Wet feet through the snow with temps hovering around zero sucked. Keeping shoes and socks dry would have been worth it.