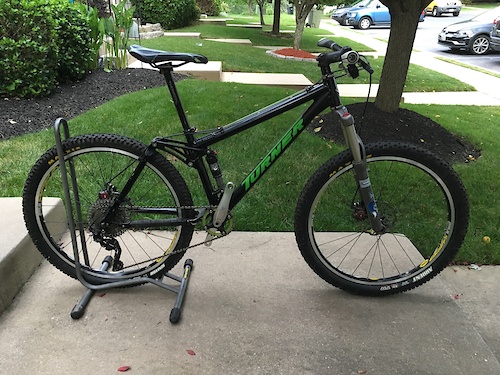 $600 USD
Bombproof & turner are synonymous. This thing has been through all sorts of east coast hell, and is foaming at the mouth for more. yes shes 15 years old, yes she doesn't have the newest shimano XTR groupo, but what she does have is a tried and true 10 speed XT shifter and derailleur, with a Sunrace 11-42 cassette,a Sram 10 speed chain, and a Raceface narrow wide ongood old Shimano XT cranks. Wheelset is a good old mavic CrossLand ordeal. Rubber consists on an Ardent in the front and an Ignitor in the back, both tubeless with hundreds of miles left on them. Fork is an older Fox 32 (probably 140mm) that's been push'd. Rear shock is a Fox Float R Revolution series. Both ends are probably due for a service, but still do their job well as of now. Frame bushings are absolutely quiet, headset is Chris King, bottom bracket is smooth as butter. Cockpit is made up of some noname handlebars with Ergon grips (don't know the model but they have the wide palm thing), an 80mm Bontrager stem, Thompson elite seatpost and Bontrager saddle. Brakes are solid avid BB7's. What more is there to say? She works well just about everywhere and doesn't complain.
Load more...
193 views