Secretly, downhill is the first love of most of us at RAAW. There’s nothing quite like what you can do on a DH bike. The risks you can take, and get away with, leave you with a mischievous grin as you head into the next corner, already trying to one up yourself from the one you just left behind.

Ever since RAAW began, the idea of one day creating our very own DH bike has been a seed in the back of our minds, organically growing along with the brand, until today.

The RAAW DH is a bike built for sending it down the Champéry World Cup track, a place that we hold very close to our hearts. There’s no messing around there, no fuzziness in the intended use. Every decision in the bike followed that crystal clear idea and results in a bike fit for tackling one of the most demanding courses to be raced on, again and again.

2022 will be a year of learning, riding, racing and developing the bike. We’ll be taking you along on that journey with videos, photos and behind the scenes stories here on this page, YouTube, Instagram and through our newsletter, all the way to when the bike will be available in early 2023.

Getting across just how many factors, facets and details go into a bike’s development is no easy task. It might be that only the people that do the development have some idea. It’s like a wild circus act trying to juggle them all. Compromise might make the marketing departments wince, but it’s in the careful balance of all the compromises, all those factors, where a bike truly comes to life.

Developing a DH bike, however, takes a slightly different approach to this circus act. Many mountain bikes, like our Jibb and Madonna, have to go up, down and all around the mountain. Meaning that the juggling is with a lot of balls.

A DH race bike, on the other hand, is a very focussed tool. Its intent is so beautifully clear that it might actually mean that you’re juggling with less balls, it’s just that with the speeds and ferocity that DH bikes can be ridden with, all the balls are on fire.

And for us at RAAW, that different style in development also came from our simple love for DH bikes, racing and culture. When passion meets profession you might never work a day in your life, and developing the RAAW DH bike transpired to be such a simple task from its clear focus and the fact we were enjoying so much what we were doing. But simple does not mean easy.

While a DH bike is a very focussed tool for a specific job, sometimes that job can change. Different riders and racers jump on board, the tracks vary from race to race and conditions can change at the flick of a switch. So, having a toolbox to delve into to meet all those demands was something that we felt would be useful to have when you’re up at the ragged edge and still pushing for fractions of a second. 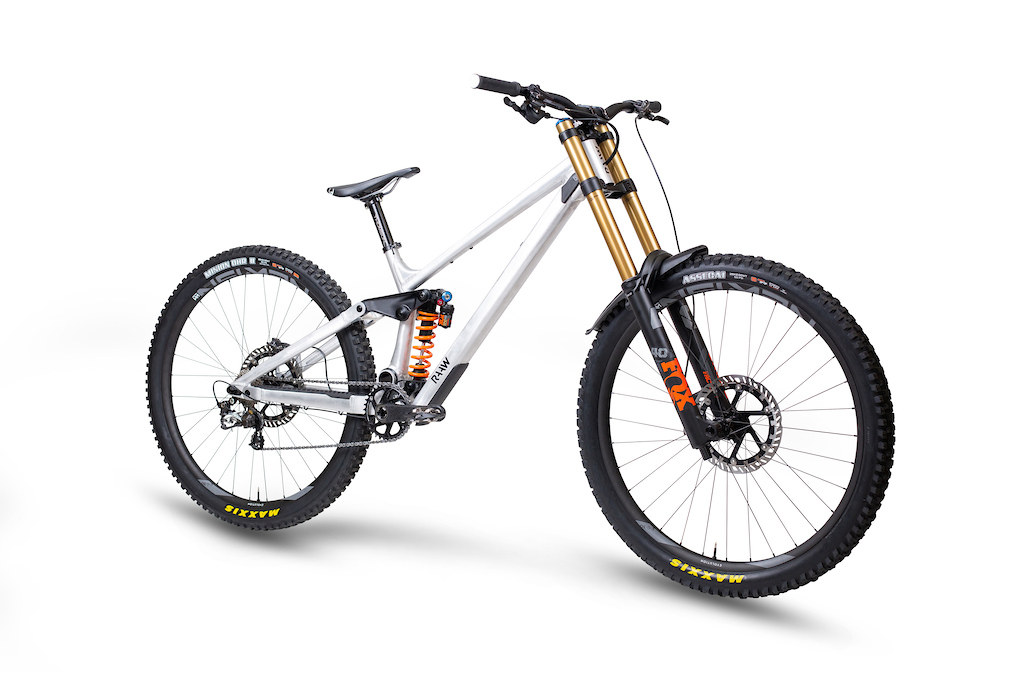 Up front, the reach and head angle of the bike can be adjusted separately or in combination to alter the fit, feel and weight balance.

In the middle there are three different BB heights to fine tune with, in combination with three different levels of suspension progression. These affect more the segments of travel that a rider will spend more time in, giving usable and feelable adjustments.

Out back, we have our keyed in axle system that ties the dropouts of the bike together while having three different chainstay lengths. And as the frame sizes grow, from M to XL, the range of chainstay adjustment grows too, ensuring that the balance of the adjustments at the rear of the bike matches the length out front.


Our unhealthy obsession for DH bikes, racing and the culture that surrounds it has meant that the legend of Champéry, Switzerland, needs little introduction to us. Famed race runs down the mightily steep track are forever etched into our minds. And every time we clip in to ride the wild roller coaster one more time we’re still a bit in awe of where we’re riding.

While many of the World Cup level race tracks can be pootled down to some degree, their true signature is when you turn up the speed, thinking you’re ten men, only to have the intensity turned up exponentially higher than you were expecting. Grabbing the bull by the horns and really going for it in Champéry results in one hell of a kick, and it’s damn addictive. Long after your body has waved the white flag and you’re running on fumes, the desire to keep lapping for more of that kick lingers on.

Having a bike fit to tackle this wild ride, run after run, was probably the highest box on our list to tick. The idea to develop a bike that would not only have your back, but egg you on to go faster, lean further and push harder was something we were keen to accomplish and something that, in conjunction with our toolbox of adjustments, would be usefully transferable to all the downhill tracks and riders out there.


Developing the DH bike was one project. Going racing is another.

We’ve been chin scratching about the finer details of our DH bike for a long time behind the scenes. So rather than wish the racers good luck and watch from the comfort of our sofa as they risk their bacon, we saw an opportunity to be more involved. 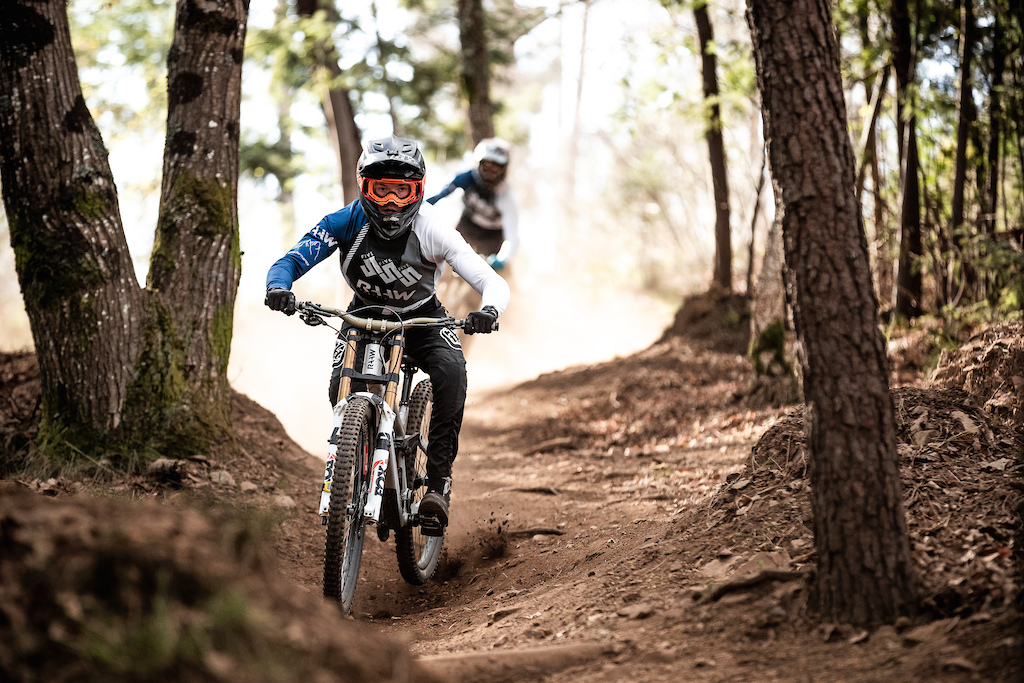 Knowing the bike so well inside and out, seeing as we’d developed it, there was a wealth of knowledge about it and all the adjustments in the toolbox that we could offer to the racers. At a DH race event, the number of runs can often be less than one good day in a bike park. Being comfortable and confident as soon as possible on the bike is paramount to having one less thing to worry about in the whirlwind of lines, roots and holes. We decided to create a link between the engineering and smart fingers at RAAW directly to the racers and team. That link is the race engineer role. It's a role that is commonplace in the likes of MotoGP, but not so prominent in downhill racing. The idea of the role is two-fold and works both ways to benefit both RAAW and the race team.

Our expertise and knowledge behind the development of the bike comes in to tie the engineering and further development of the bike directly to the guys who are riding at the highest level. In the same way that the frame is the meeting point for the suspension, wheels and controls, the race engineer is the link between RAAW, the racers and all the technical minds behind the various components that go into making it a complete race bike. We’re all there with the same goal of speed, and in pursuit of that we’ll be at the races and test sessions to make sure each racer is as fast and comfy as possible on the bike, using all the tools we have at our disposal. 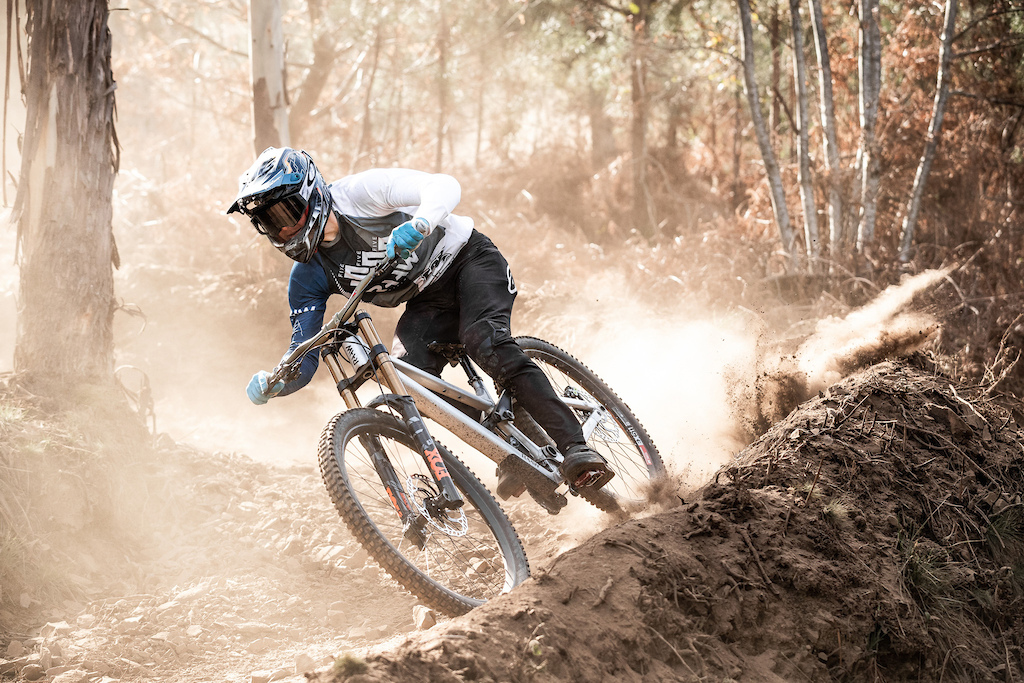 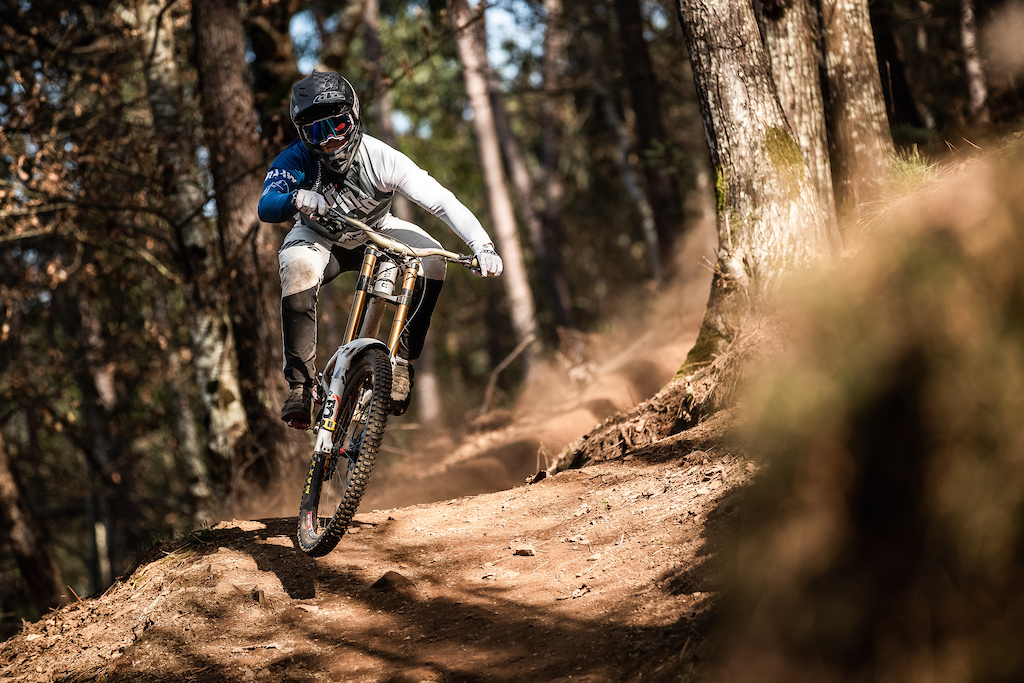 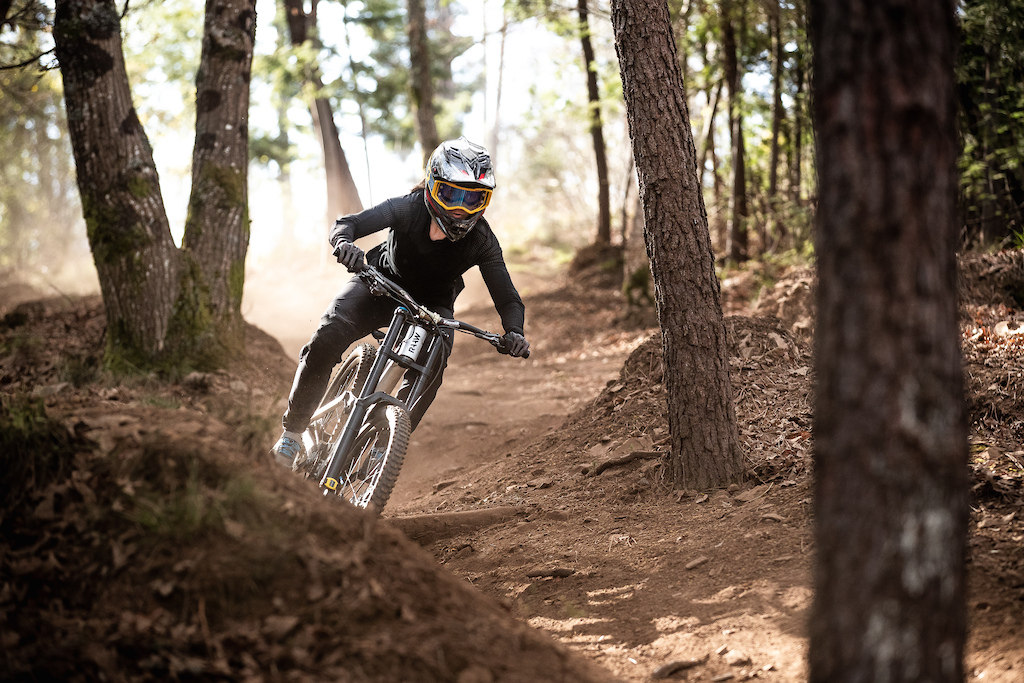 We can also do the work in between the races to explore and analyze the different setups and adjustments to make sure that when we rock up to a race, we already have a direction for the bike’s shape and the ride feel we want to achieve for what lays in front of us.

The culture surrounding DH racing is that of a family, and being part of the racing family is important to us, to make sure that when a racer swings a leg over our DH bike that they have the utmost confidence in their equipment and the brand that they’re riding for. It also opens up the door to even more learning that we as a brand can capitalize on. 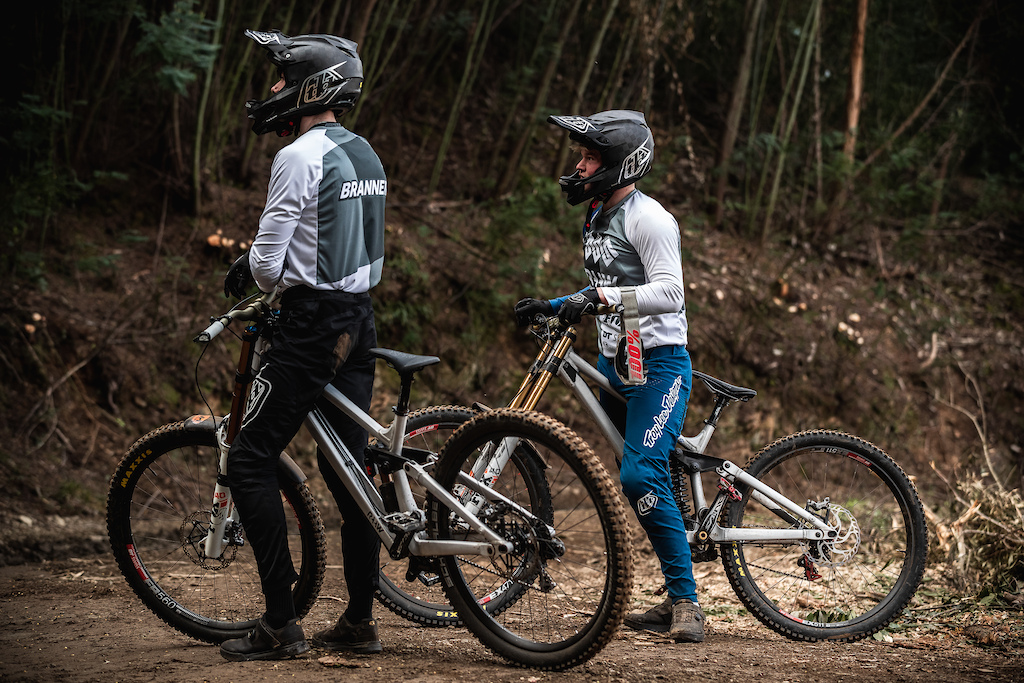 Nowhere else is a bike taken closer, or over, its limit more than when it’s being raced. Up at that ragged edge is where the equipment is properly tested. Getting involved with the racers and team allows us to understand these demands better, both in between the tape and in the work stand, and further develop not only the DH bike but also weave what we find into all our bikes. Having a bike that racers can quickly feel comfortable enough to push the speeds and take more risks can also be channeled into your average weekend rider wanting to have the same level of comfort, control and confidence for them to extract the most amount of fun out of their ride. Having bikes that are durable and easy to work on is one of our morals and making sure that our bikes hold up to the abuse of World Cup DH racers and the demands of their mechanics is another facet that can go towards everyone who owns a RAAW. DH racing might be a very focussed sport, but its learnings can benefit much more than might first meet the eye.

And beyond that, we’re simply proud to enter the racing family and contribute to what we feel, and have done since knee high to a grasshopper, is the coolest part of mountain biking.

Afterschoolsports (Mar 23, 2022 at 7:28)
I have done a bit of hand polishing metal stuff to mirror finishes. It can be quite a relaxing thing to do. A buffing wheel speeds things up if you want. Stainless bench tops look so good when you hit them with a dual action polisher.

DaveRobinson81 (Mar 22, 2022 at 18:00)
Indeed. Would be interesting to see the key dimensions side by side, maybe they are in violent agreement on frame design? Though I think it is Neko...

DirtCrab (Mar 22, 2022 at 15:14)
Aaand whatever productivity I had left in me today has been replaced with day dreaming about Champery laps. Bike looks great, too. Good luck this season!

bxxer-rider (Mar 23, 2022 at 7:19)
It's sad lots of the proper fun parts of champery have been sanitised to make it more accessible to lower abilities

RBalicious (Mar 22, 2022 at 15:24)
Lots of talk about balls, juggling lots of balls, and balls on fire. Probably should see a doc about the last one... Good chance you're not the only one that went for a RAAW ride. Nice lookin bike however.

wyorider (Mar 22, 2022 at 17:46)
Love RAAW's ethos and commitment to overall performance (at a reasonable cost) above weight.

Since PinkBike keeps slipping non MTB stuff in here-I'd love a RAAW road racing frame. Not gravel (but decent tire clearance would be nice). Road-steepish angles and a sub-1m wheelbase on a 56tt frame.

Anyway-hell yeah on this one!! Don't live close enough to a terrain park to own a dedicated DH bike, but if I did this would be the one.

bashhard (Mar 22, 2022 at 16:41)
I like that the founder and engineer behind RAAW promotes his bikes by really shredding them in the videos himself

jackalope (Mar 23, 2022 at 3:39)
Lol, as if its even possible to ride, much less race, a bike sans idlers. They're going to be putting idlers on TDF bikes soon. But seriously, that is a simply gorgeous collection of processed bauxite. Do want.

misteraustin (Mar 23, 2022 at 4:53)
The "Bike as a Toolbox" concept is incredible. This mindset pushes innovation and the result is some of the most capable bikes ever. Love it

Afterschoolsports (Mar 23, 2022 at 7:30)
@ddmonkey: have they made any major changes to it? I remember it looking absolutely terrifying, even through GoPro lenses.

ddmonkey (Mar 23, 2022 at 8:06)
@Afterschoolsports: since the early days yes, the corners all have plenty of support now so it flows and its challenging but not too terrifying!

If I can ride it & enjoy the experience it cannot be that hard...