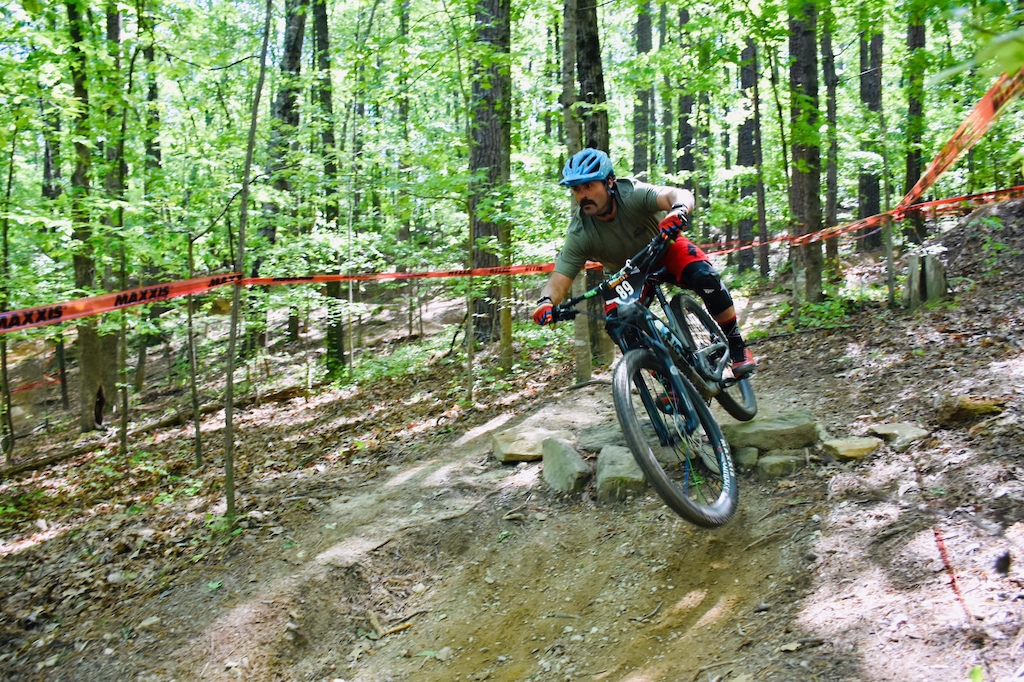 QUICK SIX #6
ROSWELL, GA
PHOTOS: VOJEKT
Simply flying all day, was Josh Hennessey (Blue Mountain Bikes) in Masters Men. Josh would take the win in that class with a time that would have placed him 3rd in Expert.
Each year, the Big Creek Quick Six Enduro invites locals and those across the Southeast to the North Atlanta suburb of Roswell for a great day on the trails. The event is an annual fundraiser for the SORBA Chapter, Roswell-Alpharetta Mountain Bike Org (RAMBO), to continue building and maintaining local trails, plus hosting programs for kids in an urban bike park setting.

The Quick Six is just that. Six short, but fast, downhill-focused stages, which are ideal for spectators to see all the action on each stage. Racers alternate between the downhill sections of the park’s XC and freeride trails. Special one-day-only race lines are cut on the XC trails each year to amplify the downhill factor and add fresh surprises to balance out the local vs. visitor benefit. Unlike the EWS, there isn’t a time requirement to be at the next stage, which leads to a relaxed vibe to the whole day. Shred. Chill. Repeat. 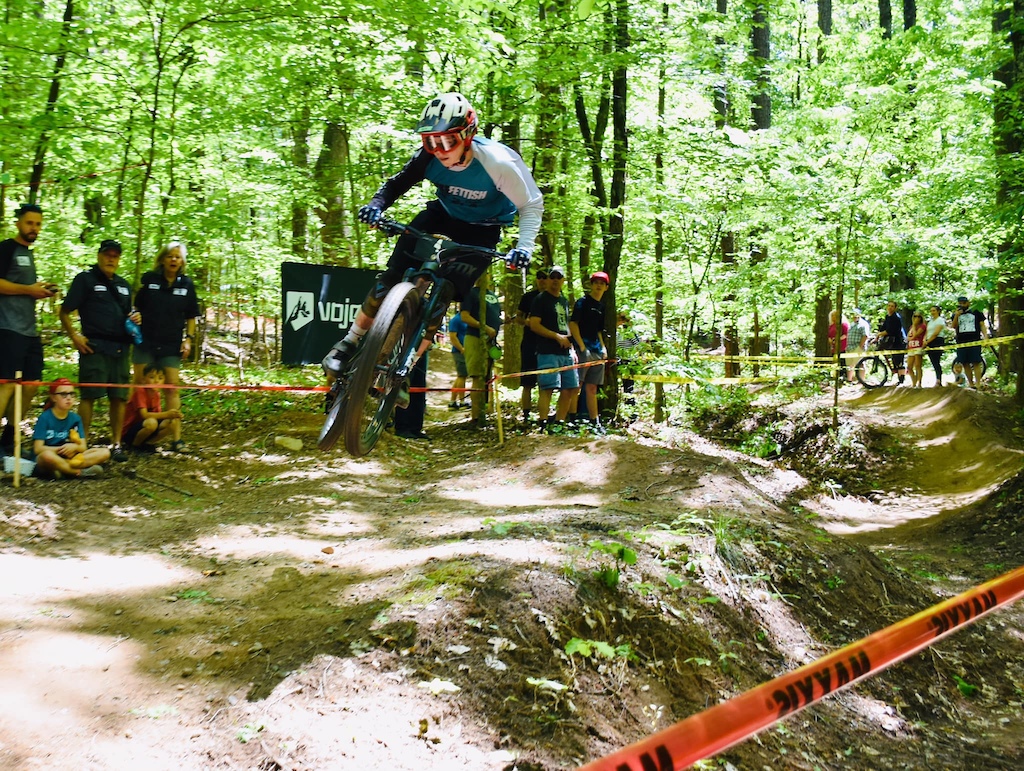 Jack Brown (Bike Fettish Devo) had the goods on the day taking the win by six seconds thanks to scrubs like this on Stage 4.
With former expert category winners Ben Hobbs and Chris Wyatt both missing this year, the door was wide open. The day’s battle shaped up between two Bike Fettish Devo team riders, Jack Brown and Drew Blankenbecler (yes, the Seth Bike Hack’s bike winner guy). Stages 1, 2, and 4 would go to Drew whose steeze factor is unrivaled, but he simply couldn’t head off Jack’s pace in Stages 3, 5, and the extended Stage 6. Jack took the win by nearly six seconds, plus a ton of swag for his efforts. JJ Jackson (Forte Racing) and Justin Rush (Blue Mountain Bikes) fought for the 3rd place podium spot, with Rush taking Stages 2, 3, and 4, but JJ simply had the pace in the remaining stages besting Justin on Stage 6 by nearly six seconds. 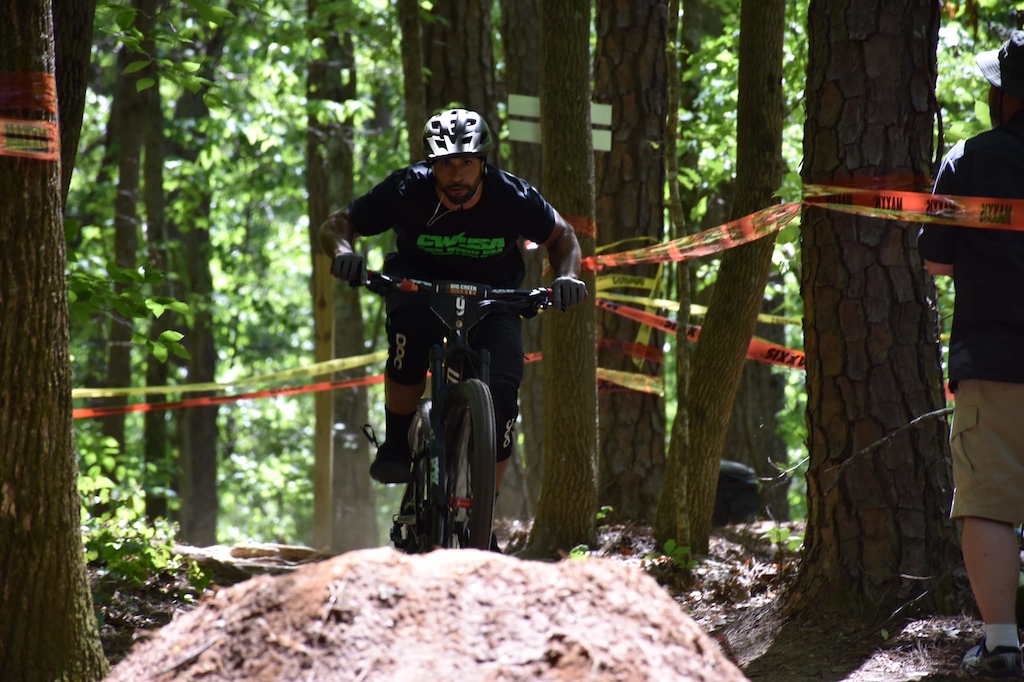 JJ Jackson (Forte Racing) enter the 2nd half of Stage 6 finishing just 3 seconds back in Expert
The Georgia Interscholastic Cycling League (part of NICA) is following the national trend by experiencing massive growth attracting middle and high school students to participate mountain biking events as part of area teams. The Junior Men’s class at this year’s Enduro was packed full of competition as a direct result. Racing for the top spot was fierce with a difference of less than a second between first and second John Mark Stevenson (Perimeter Biking) earned significant time on Stages 1 and 2, but gave most of it back on the pedally Stages on 3 and 5 to give Ian Kelbert (Blue Mountain Bikes) the lead by 0.841 seconds. 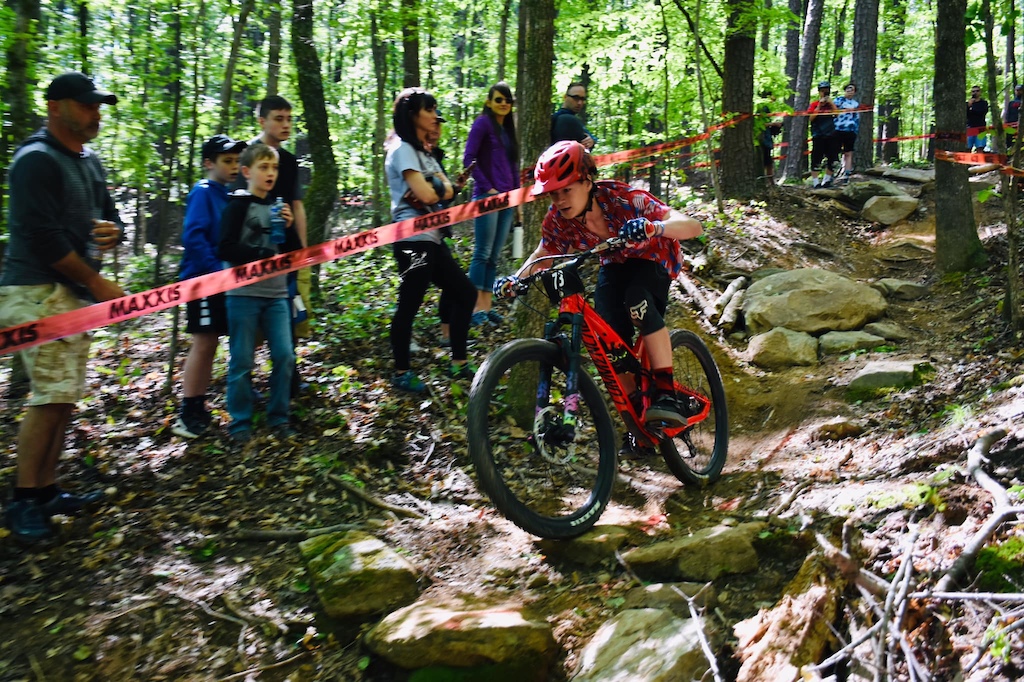 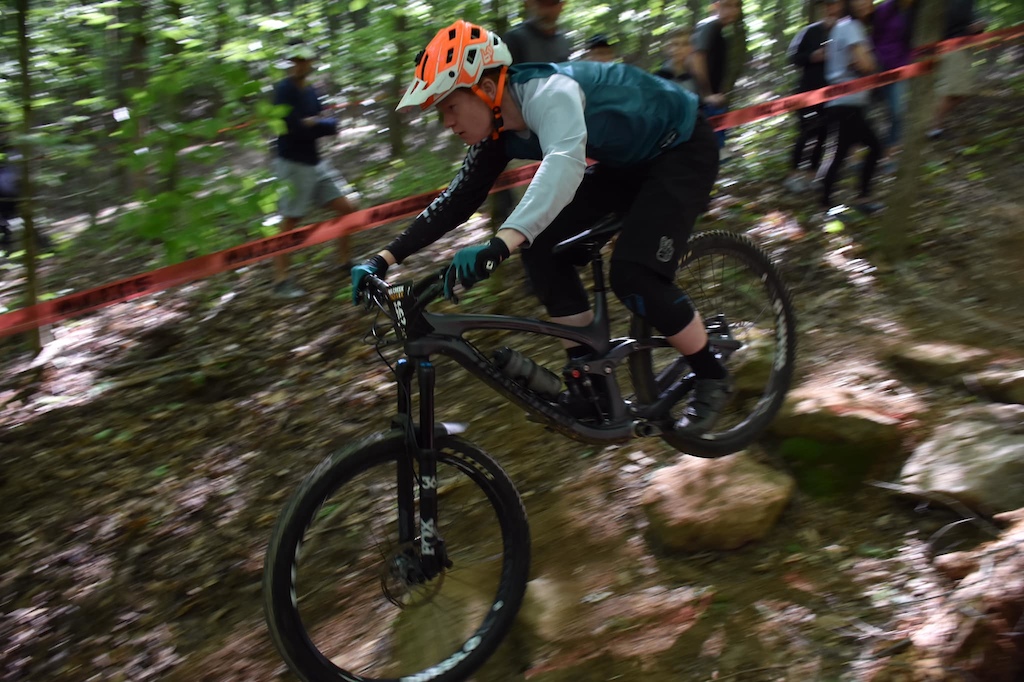 Bike Fettish Devo came with a huge contingent. Their rider Jacob Keller, had a strong race, but was just 4.5 seconds off the Junior Men's podium in 4th.
The Women’s Open Class featured great racing and lots of smiles throughout the day. Sunshine Cycles’ ladies Kerri Miazgowicz and Christine Stratton would end the day 2nd and 3rd just 2.5 seconds apart. Christine would give up her wins early in the day on Stages 1-4 to Kerri who took the wins on 5 and 6 by more than 3 seconds each. Quick Six Enduro regular, Carol Davenport (Fresh Bikes) took the class win with a commanding lead of 22 seconds losing only Stage 5 to Kerri. 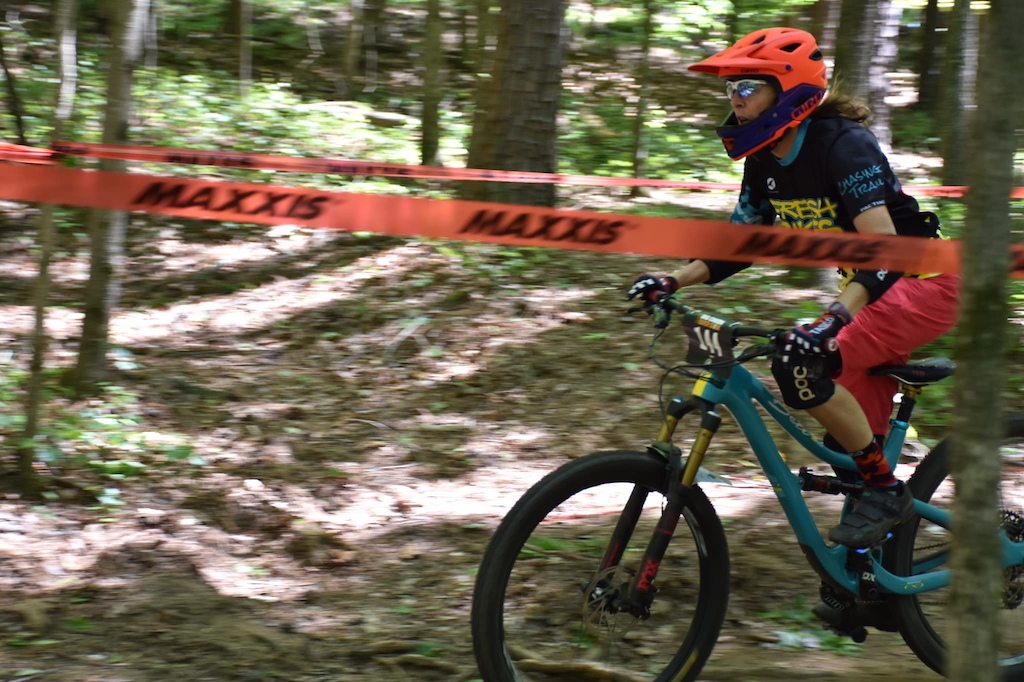 Carol Davenport (Fresh Bikes) hard on the pedals during stage 5 on her way to win Women's Open
Each year, the Quick Six Enduro hosts the Team Category where teams submit their pick of the fastest 5 riders who are then scored based on place in their class. Lowest points total wins. 2018 Team Winner, Joe’s NoFlats was absent this year, but that didn’t both former winner, Blue Mountain Bikes who took the win and bragging rights on the day. Chattahooligans, Inc. and Outstokin’ would round out the podium spots. 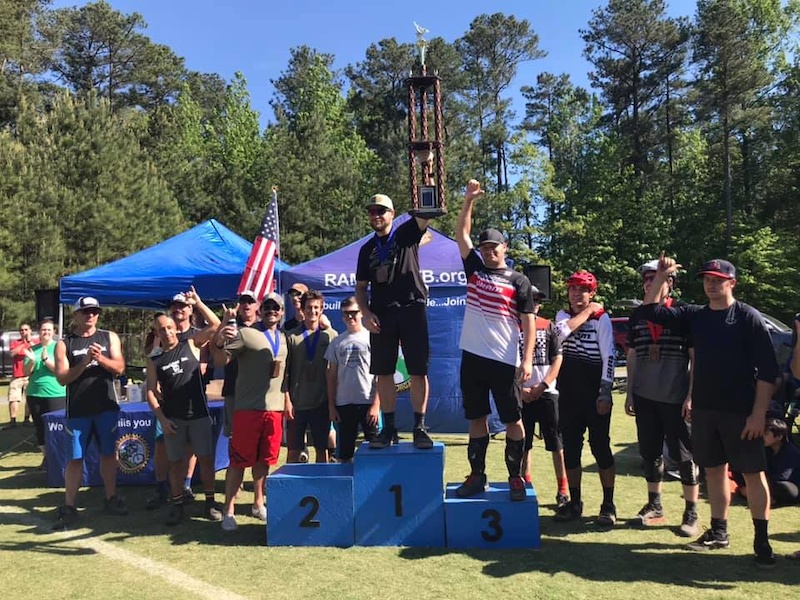 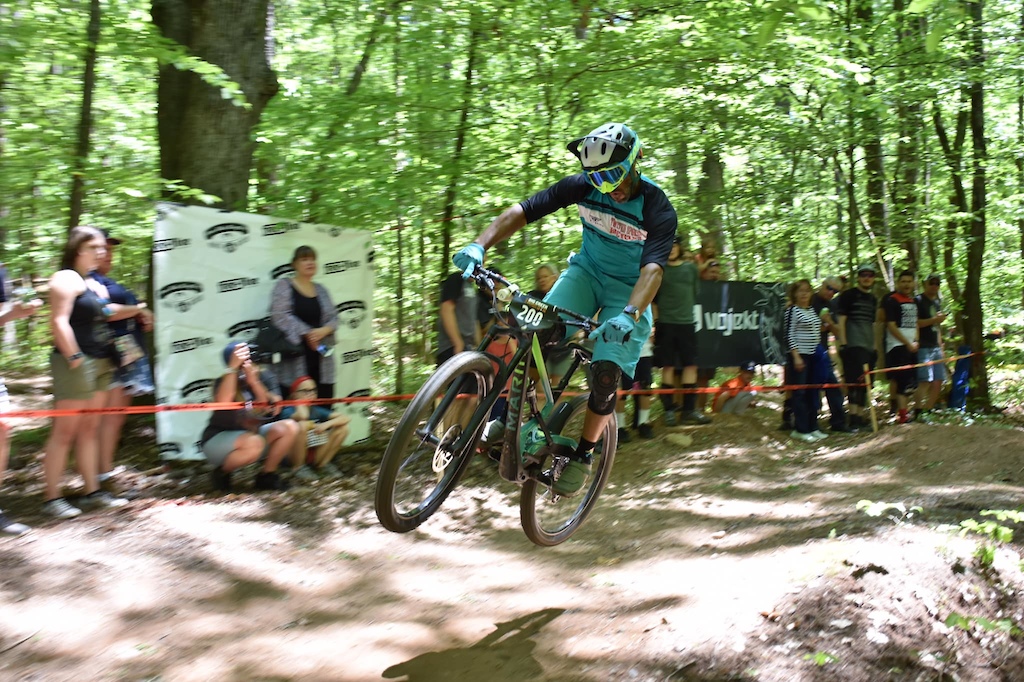 Brent Noisette coming in hot on stage 4's hip jump. Special thanks to Brent and Shellie with 3rd Coast Productions for providing the timing and scoring each year at the Quick Six.


The RAMBO crew would like to thank all racers, volunteers, spectators, and sponsors for another great year. 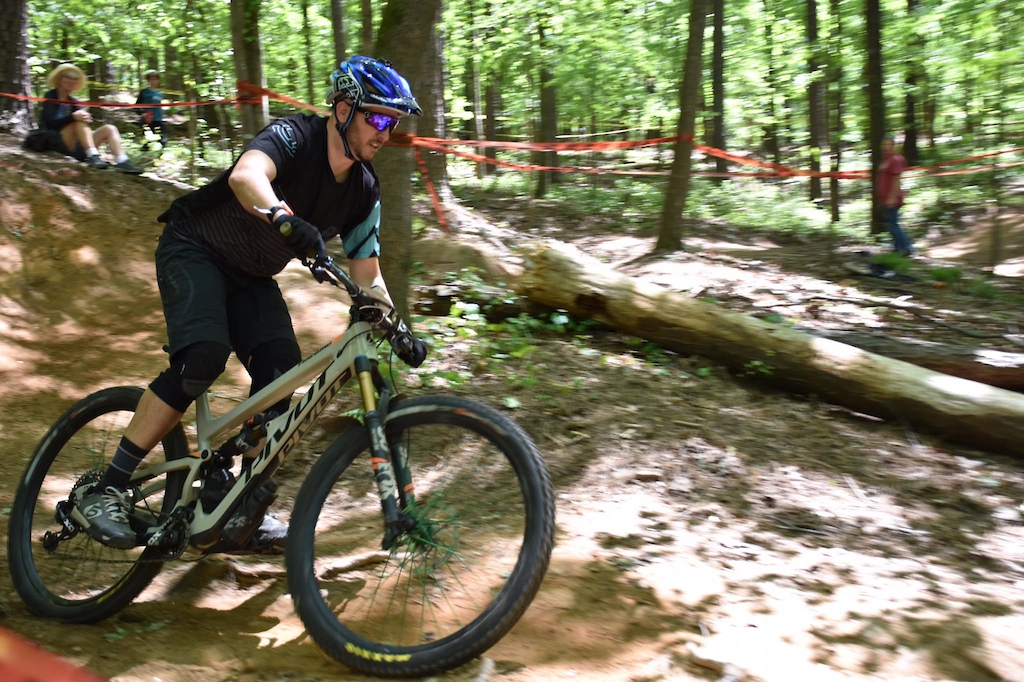 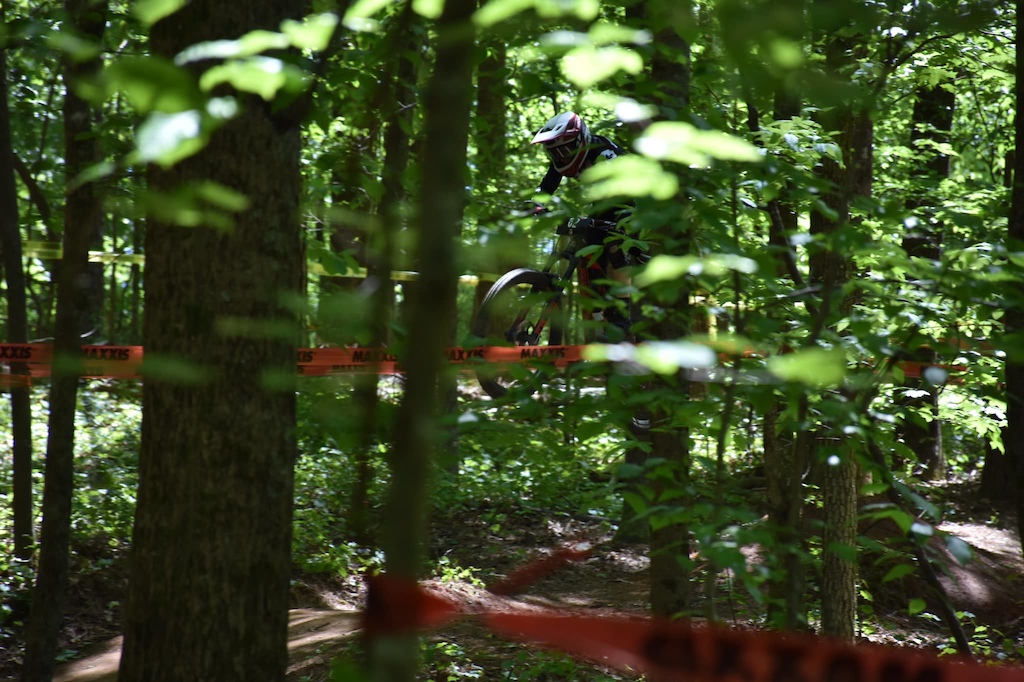 murphisstillrad (Apr 30, 2019 at 11:16)
Such an awesome event! Please keep a close eye on any news related to Big Creek Park in Roswell, GA. It is still not safe from being developed into something else by the city.

hellbelly (Apr 30, 2019 at 9:44)
It doesn't get much better for a local race that has something for all. The Quick 6 is a blast for participants and spectators.