Ride The Cariboo - The Wells Experience

In the fall of 2013, the Cariboo Mountain Bike Consortium produced a video series that profiled each of the Ride The Cariboo communities of Wells, Quesnel, Williams Lake and 100 Mile House. The series will be released in three parts over the month of March and will provide the Pinkbike community a look into the riding experience of the Cariboo.

We begin in the Northern most community of the Cariboo - Wells, BC. With trails dating back to the early 1800's, riding in Wells/Barkerville is not only a phenomenal alpine experience, but a historical one as well. Some of the trails were built by forced labour during the Cariboo gold rush of the late 1860's when Barkerville was being considered for the Provincial capital and men were making history with epic gold strikes. Today, mountain bikers use the trails in search of their own fortune.

The best time to ride in Wells is during the summer when the alpine is fully accessible. We recommend a trip over the Arts Wells weekend, one of the biggest music festivals in the interior of BC. When you're not rocking out, a short ride from Wells will put you in the historic town of Barkerville, where you can pan for gold, and catch up on some history. Riding up to Groundhog Lake and over the summit of Mt. Agnus will send you down the Powderhouse Trail, recently tuned up by the Consortium. It's epic, well signed and worth the visit. 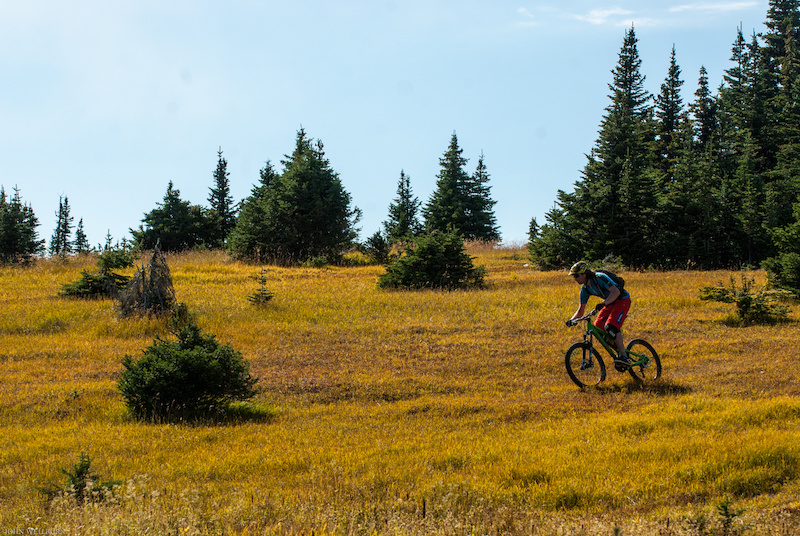 This video was supported by the Hubs Motel and the Bear's Paw Pub - both of which we recommend when you visit Wells. For all your travel needs to Wells check ridethecariboo.ca. The riders in the video are John Wellburn, Sofie Durfeld and Justin Calof. Music is by Drum and Bell Tower..

Check out the next release on March 19th from Dragon Mountain in Quesnel.

mackg (Mar 6, 2014 at 12:46)
Being from Quesnel its great to see this area getting the exposure it deserves. We may have a short riding season but the summers more than make up for it. Once you get here these trips can be done on the cheap and you're probably going to feel like you have the mountain to yourself. Keep up the great work ridethecariboo!

TheDeadSailor (Mar 6, 2014 at 12:59)
"In Saw Tooth Mountains of Southern Idaho sits Sun Valley. A small town surrounded by thousands of miles by trails. Most were created by prospectors seeking pathways into the mountains to search for gold. The gold they found here is gone but the trails remain..."

Mfro (Mar 6, 2014 at 14:41)
That section remains one of my favourite of all MTB films. The riding, the scenery, the overall vibe and Peaty just being so laid back, he's practically horizontal!

cardonethebear (Mar 7, 2014 at 10:44)
Yessssir! ROAM is still probably my favorite video ever. I feel like it portrays the true freedom mountain biking gives you when you're out ridin with buds. Loved this video! Good vibes for sure

SithBike (Mar 6, 2014 at 19:05)
We need more "classical" epic IMBA world class trails. Long ones (4-9 hours) where there is only one trail threw out the whole wilderness and you can't get lost in the middle of nowhere with your life on the line. Area's like the Cariboo have so much to gain by simply making a nice long trail covering a lot of area going threw scenic places. Most importantly there should be no need to look at a map the whole day. Let the trails speak for themselves (world class famous) and they will defend sensitive area's prone to development.

kickstand1 (Mar 6, 2014 at 12:20)
Had a flippin riot riding with you and wellburn there this summer! Cool video. Not to mention the arts wells festival is something everyone should experience at least once in their lifetime. If given the opportunity to get back out to BC any time soon it will most definitely be during Arts Wells!

bless (Mar 6, 2014 at 11:48)
Out of the thousands of ghost towns in north America, Barkerville stands at # 6 or better of the most famous list ,and is restored and alive. Nice place to visit .

dorse (Mar 6, 2014 at 14:09)
Is there a reason WHY?? Pink Bike can't keep a thread in the order it was posted. On a large thread such as this. It make developing any reasonable thought about the topic impossible. Is that Pink Bikes purpose? Too sway the opinion of it's readers, and dumb down the arguments that disagree with theirs. Which. Is becoming obvious, and that is to support their advertisers and advertising revenue.
Shame on Pink Bike.

rafaldubiel (Mar 7, 2014 at 8:35)
Excellent trail!
Below threshold threads are hidden