Photo Story: Hannah Bergemann on Trail Building & Guinea Pigging in 'The Next Chapter' 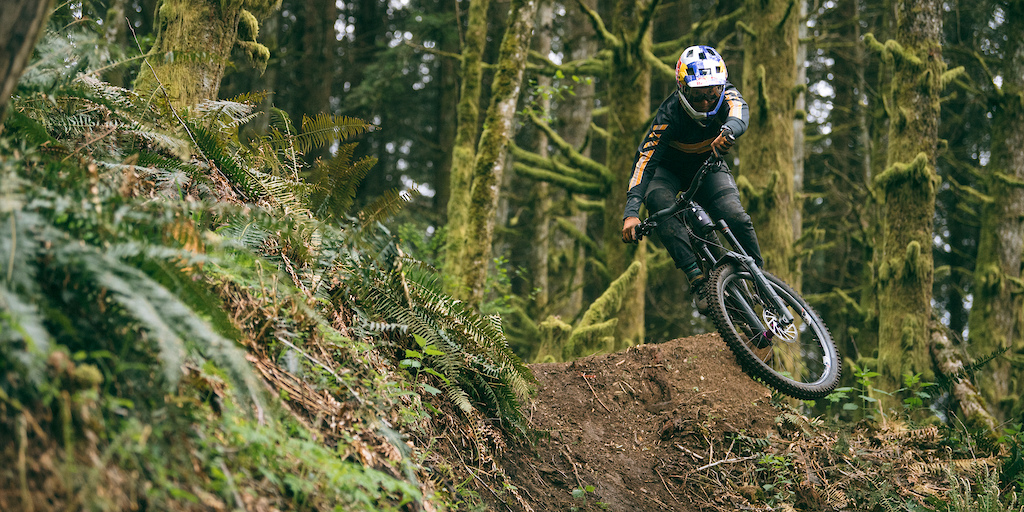 Words by Sarah Rawley. Formation Photos by Re Wikstrom & Catherine Aeppel / Redbull. All other photos by Paris Gore.


A lot has happened since we last checked in with Hannah Bergemann. She was bestowed an iconic Red Bull helmet, starred in the TGR film “Accomplice”, and rode in the second edition of Formation – the groundbreaking event of women’s freeride. But in between the showcased moments, Hannah has been stealthily scaling her craft of trail building to progress her riding back at home in Bellingham, Washington. This is where we found Hannah this summer, chipping away at a massive rock that presumably, she is going to ride. 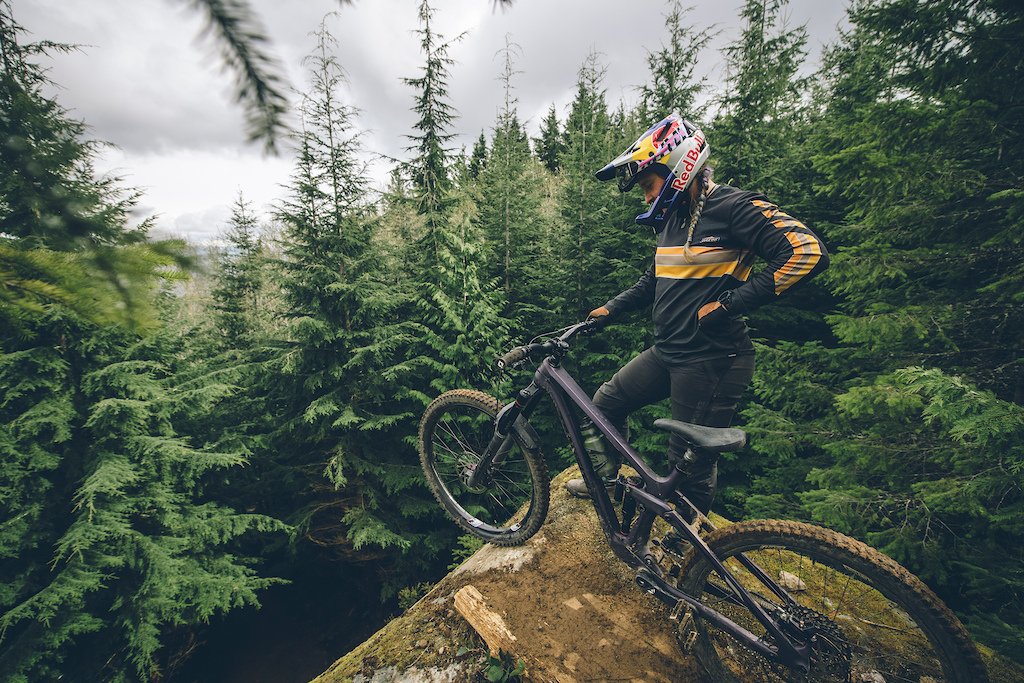 Let’s back it up a moment… donning a Red Bull helmet is kind of a big deal! For Hannah, it all started in October 2019 with the inaugural Formation event hosted in Virgin, Utah. After a standout performance, Hannah’s name was tossed in the hat for a potential athlete to sponsor. After almost a year of courting, Hannah earned her wings.

“It's definitely validating to ride in a Red Bull helmet. It's the gold standard for making it as a freeride/action sports athlete. It has a connotation of epicness. While I don't need external validation to do what I do, it’s nice to have one of the biggest companies in the action sports world supporting what you're doing is cool and you as a human. It feels really special, and I feel honored to wear it.” 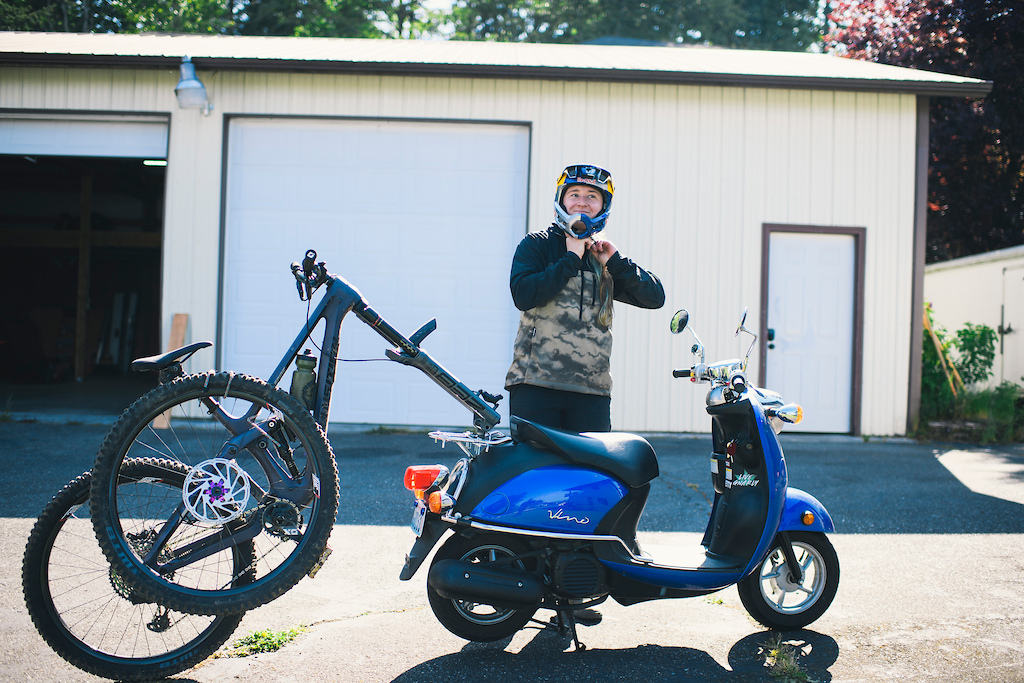 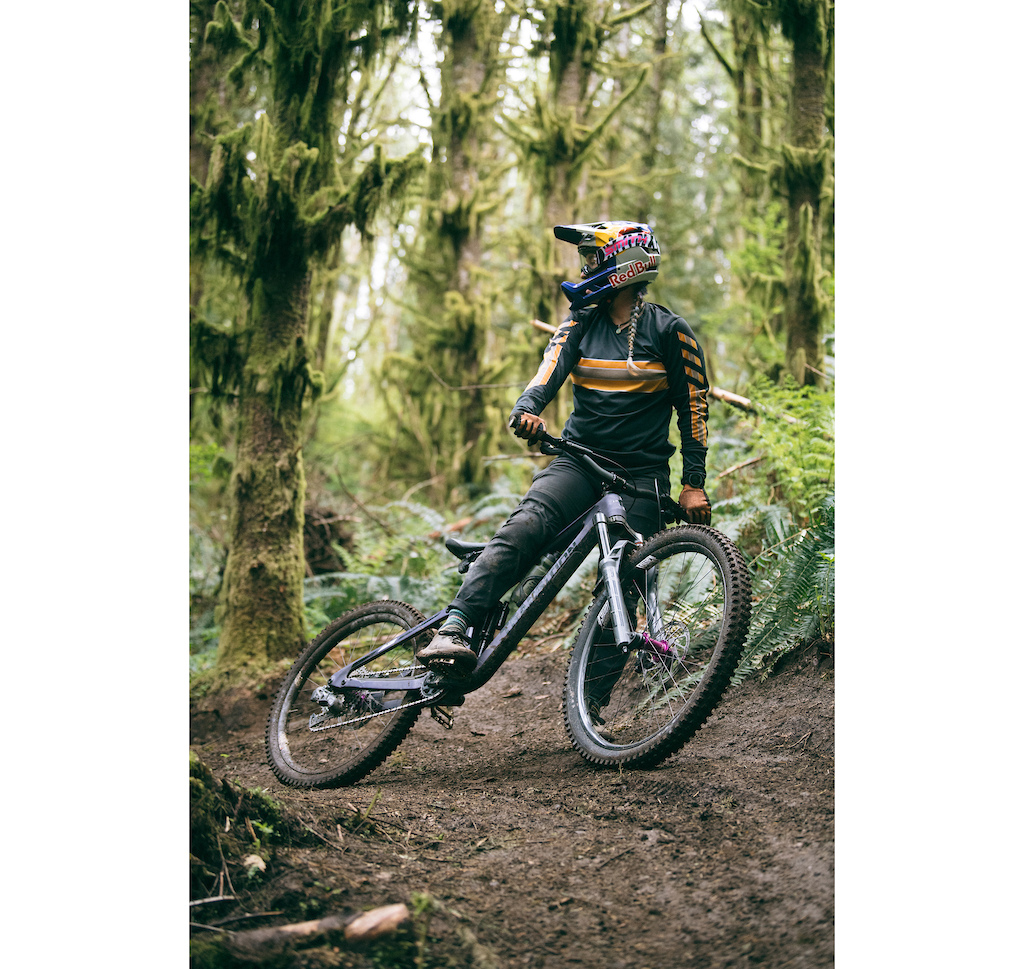 Going into her second Formation event, Hannah felt the energy from her peers to amplify their freeride mountain biking skills. “In 2019, we didn't know what we were getting into and didn’t want to bite off too much in the first go. We all chose lines that we knew we could accomplish successfully and well within our skill limits. This year, everyone knew what they were doing. Everyone was hungry and ready to take on a bigger project and push themselves a lot further.” 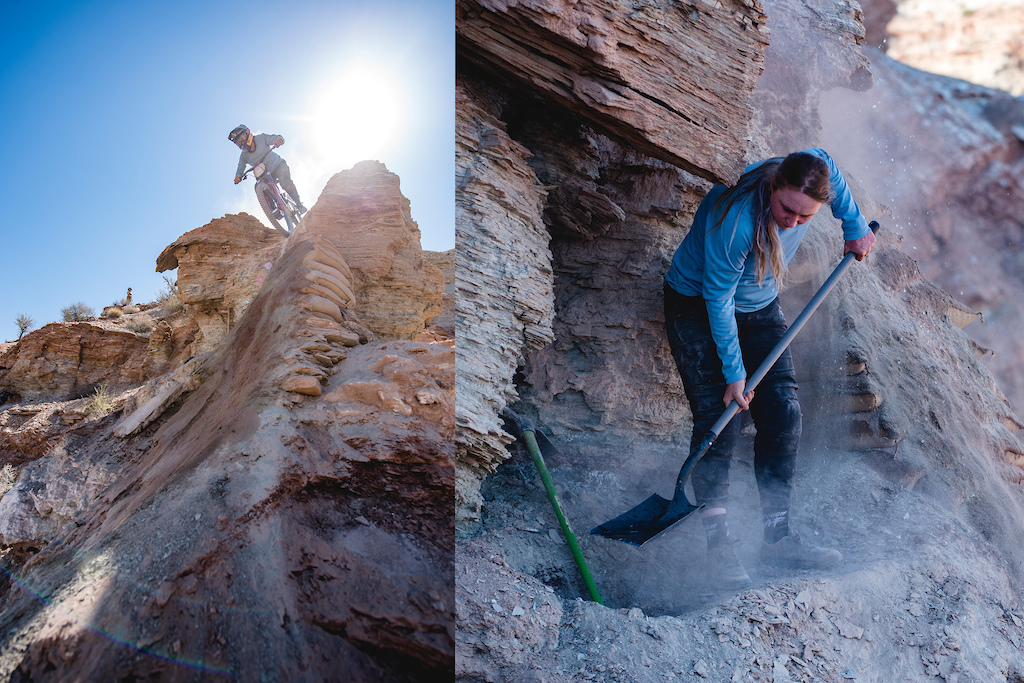 Under the blazing sun of Southwest Utah, each of the eight riders dug with their crews for three days. Hannah called upon her close friend and fellow trail builder from home, Finn Hopper to spearhead her digging team alongside Brooklyn Bell (middle) and Kristin Norman (right). Collectively, they formed Team PNW (Pacific Northwest). 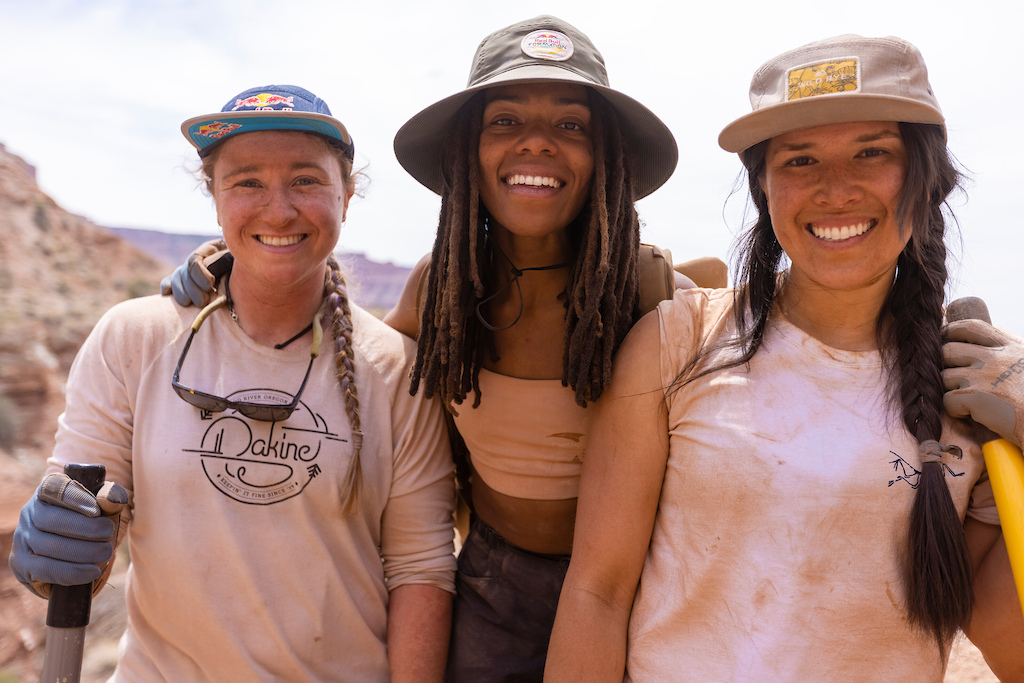 With excitement, anxiety, tense moments, and comedic relief all leading into the first run, Hannah picked her way through her line. “You want to ride each feature individually and in theory by the time you get to the top you've ridden everything, and you can do a full run down to the bottom. You develop a different relationship with each feature and connect it all together in that one run.”

The relationship that Hannah describes is exactly how she has built and progressed her freeride mountain bike career, leading her to excel in these moments. 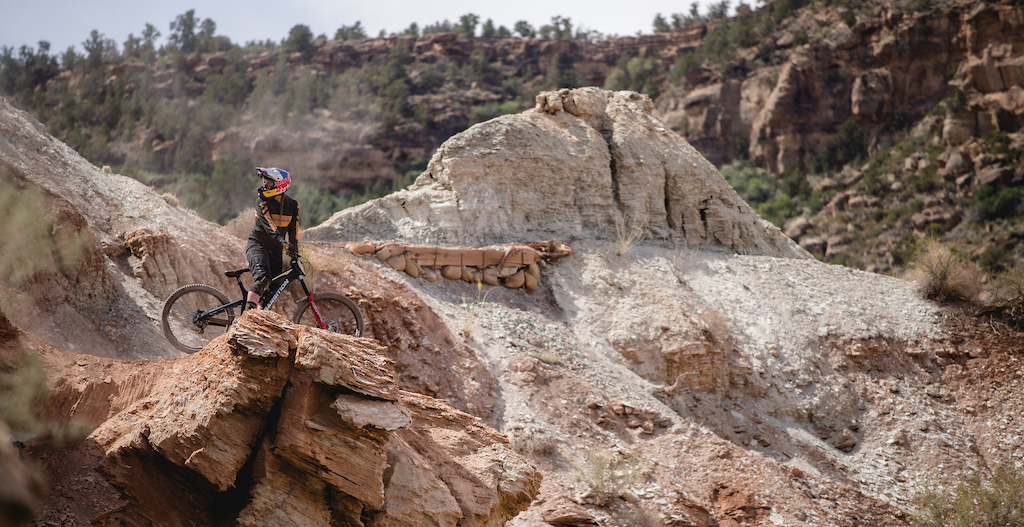 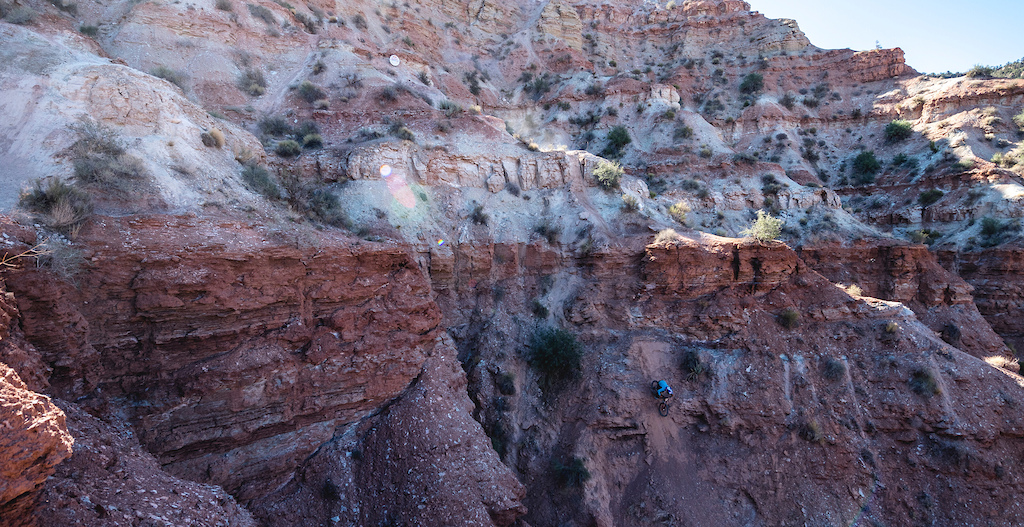 “Trail building is one of the best things you can do, because of the whole process of using the terrain, visualizing a line, building it, guinea pigging it, riding it, refining it. That whole process is basically what you're doing at Formation. It's the same process here in Bellingham and that's the part of mountain biking and freeriding that I have grown to love – the whole process of bringing features to life, being creative, and collaborating with friends.”

When Hannah moved to Bellingham, WA she quickly became inspired by the North Shoresque features that tied together and defined the local trail system – lots of steep, tech, ladders, bridges, and rock rolls. “I learned through living here that a lot of these original trails were built by a core group of people who loved the riding in Canada and wanted to bring it home. I fell in love with it before I knew who any of the trail builders were.” 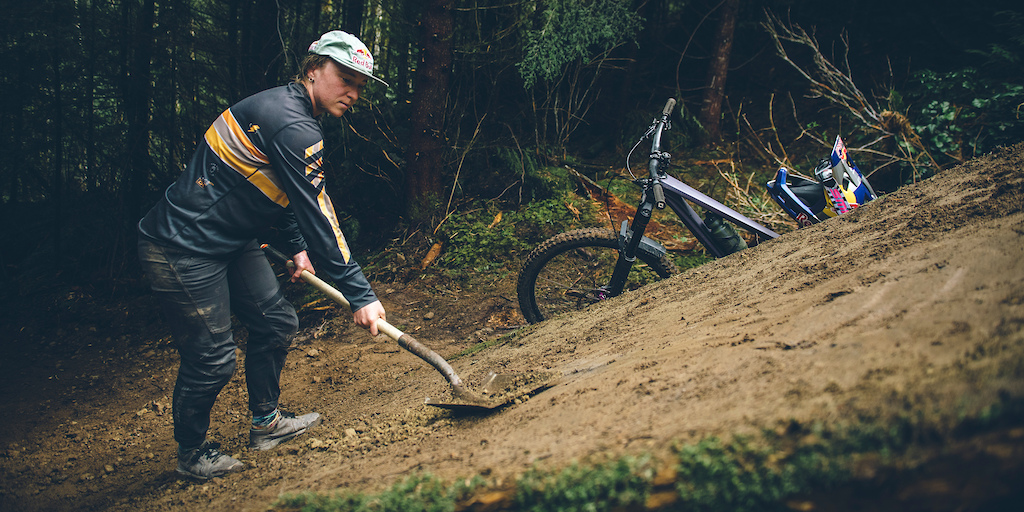 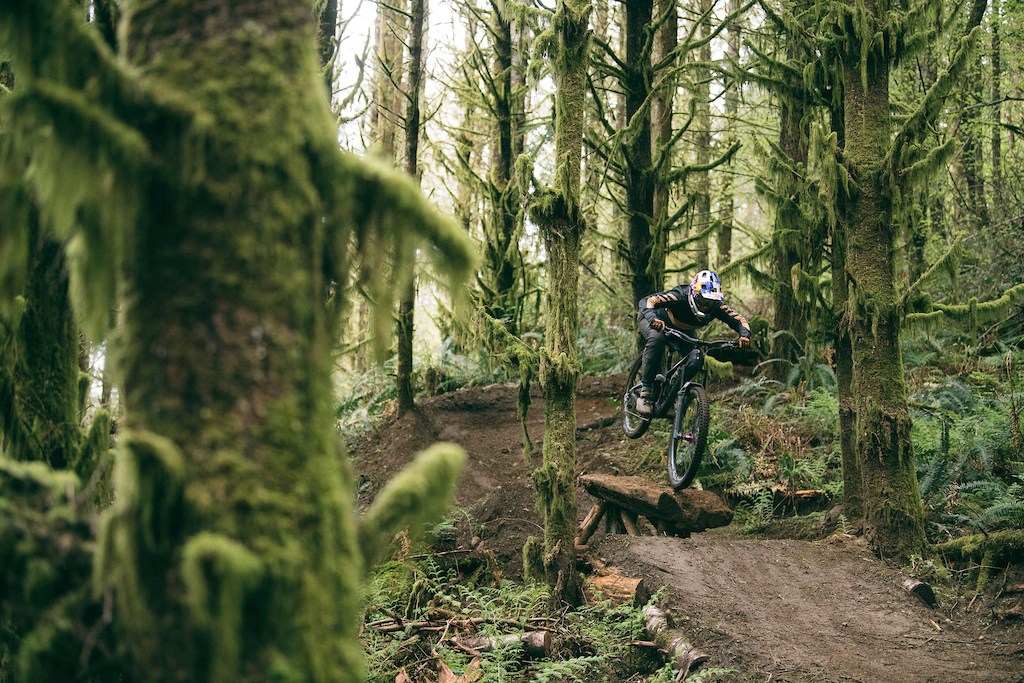 Hannah began running into Brad Walton on the trails long after she learned about his legacy. “We became friends through the bike community over the years and began riding and building trails together. I drew inspiration from his trail building style into my own. We both share the same passion and vision for building freeride trails. Whenever we get excited about that we tend to collaborate, ride, and want to dig together.”

Brad moved to Bellingham in the early 2000s from North Carolina. Melding the influence of East Coast freeride with inspiration from up north, Brad has spent the last two decades transforming Bellingham’s underground mountain bike scene. Brad’s affinity for sniffing out potential is evident in the aptly named “Iceberg” – a slab of sandstone sticking out of the trees named for its grandiose stature and paying homage to the Berg-emann herself. The process of turning a giant rock that looks unrideable by most into a 30’ rideable vertical drop, is a skill and passion that Hannah and Brad share and feed off each other. 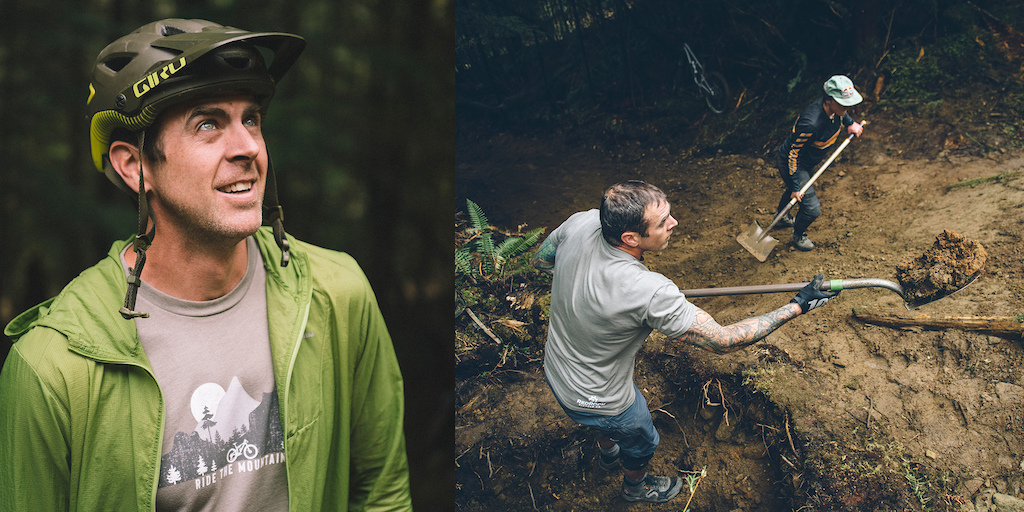 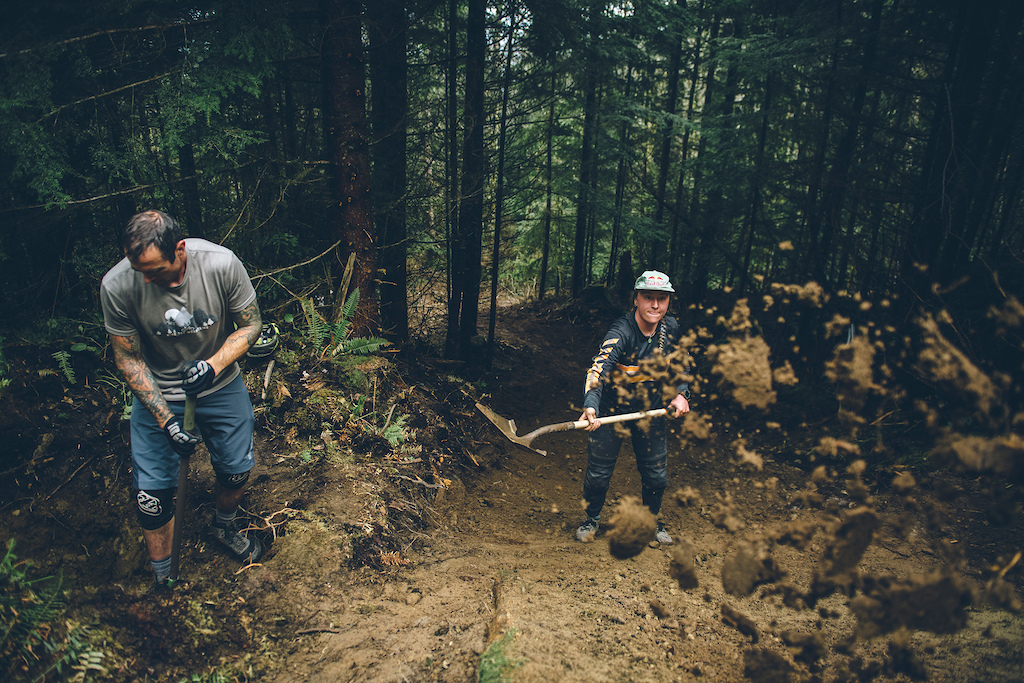 “It's a big, tall, and technical feature. But it doesn't scare me since we built it nicely with a smooth transition and nice run-off. The part of it that’s gnarly is guinea pigging it for the first time. You kind of have an idea in your mind of what it's going to feel like when you're building it. Your front tire is gonna do this, then you're going to roll over, and your back tire's gonna do this. Then you'll be able to brake here. You have this whole plan in your mind how you expect it to go, but you never know exactly how it's going to go until you do it. Just that whole expectation to reality is what makes it gnarly.”

The two worked seamlessly together to clear a path for the runout, pack in a smooth transition, build a run-in up top, and even rappel down to scrape the moss off the rock with a scrubby brush. 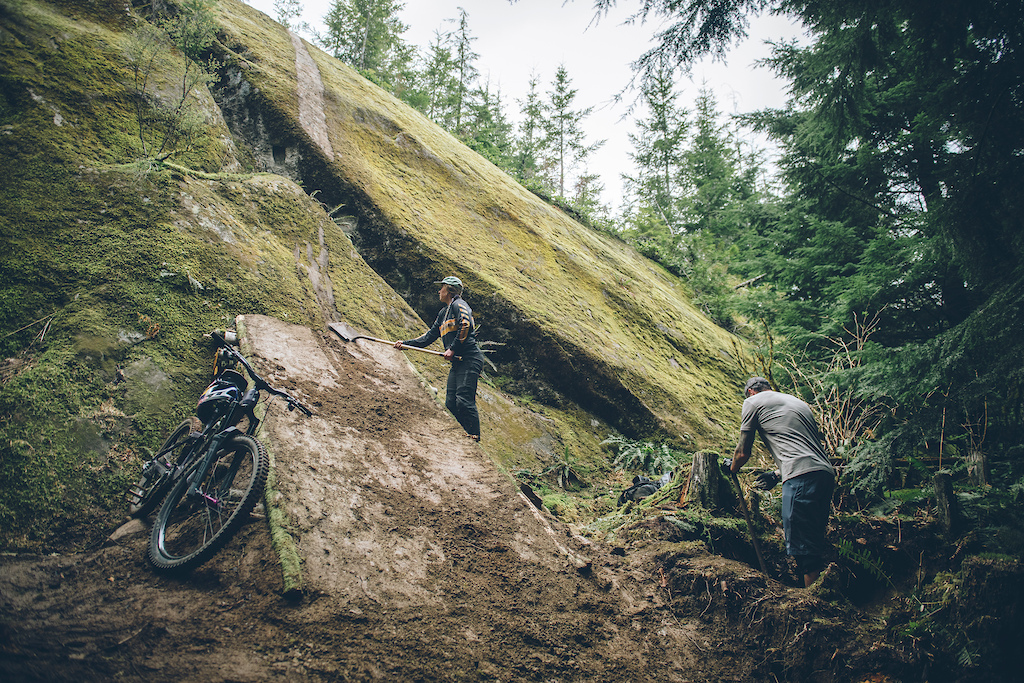 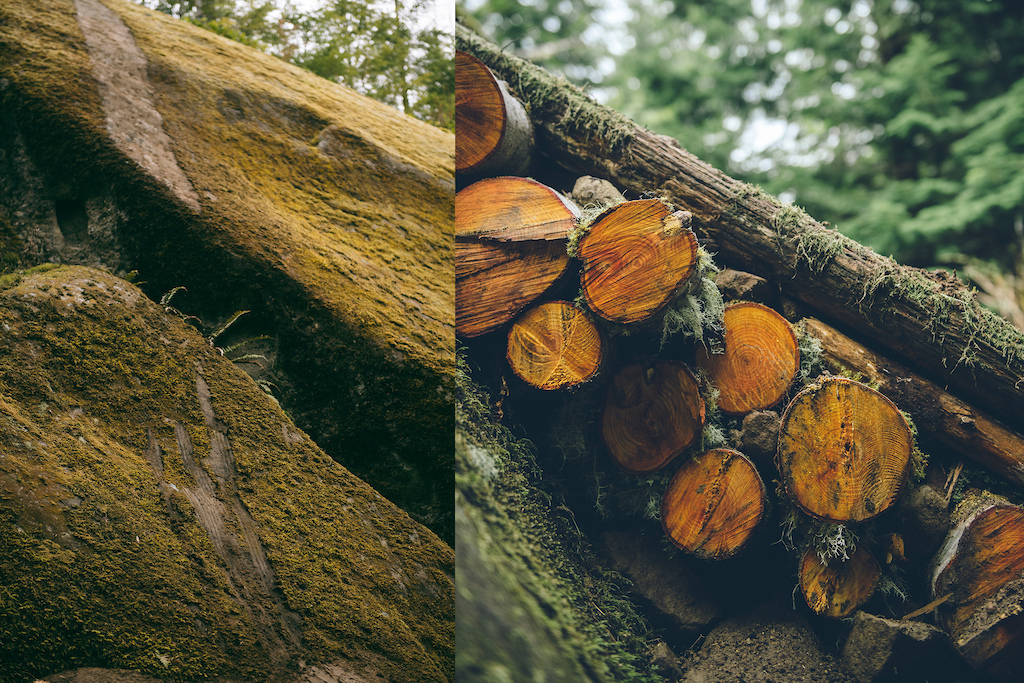 “Brad has the ability to look at a feature and puzzle through the process to make it rideable. He's got a bunch of tricks specific to trail building in the PNW - using specific types of dirt and wood or certain tools.” 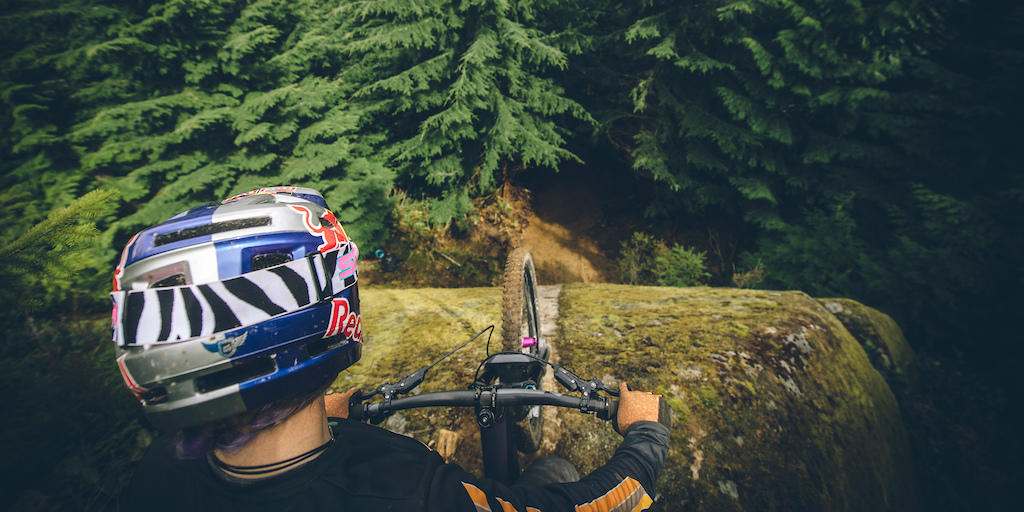 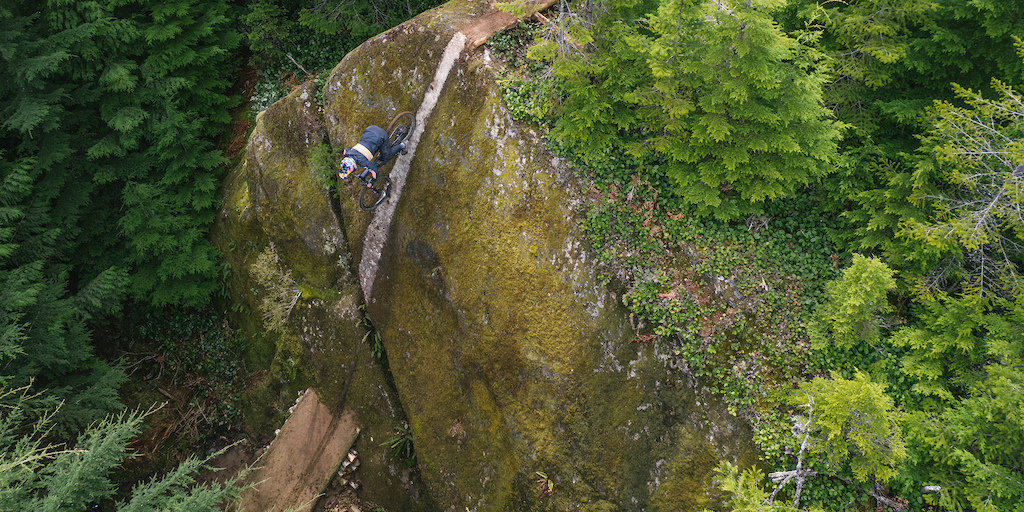 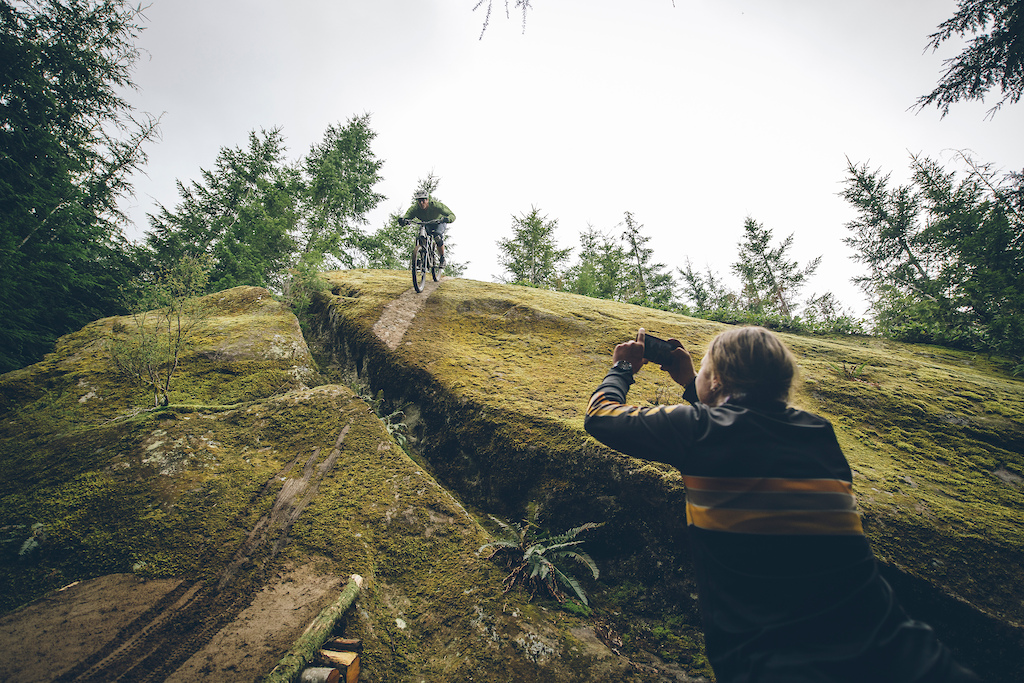 Hannah attempted the feature first and Brad followed her lead. “He was pretty nervous to ride it, and when he did, he was like ‘yeah, that’s awesome!’” 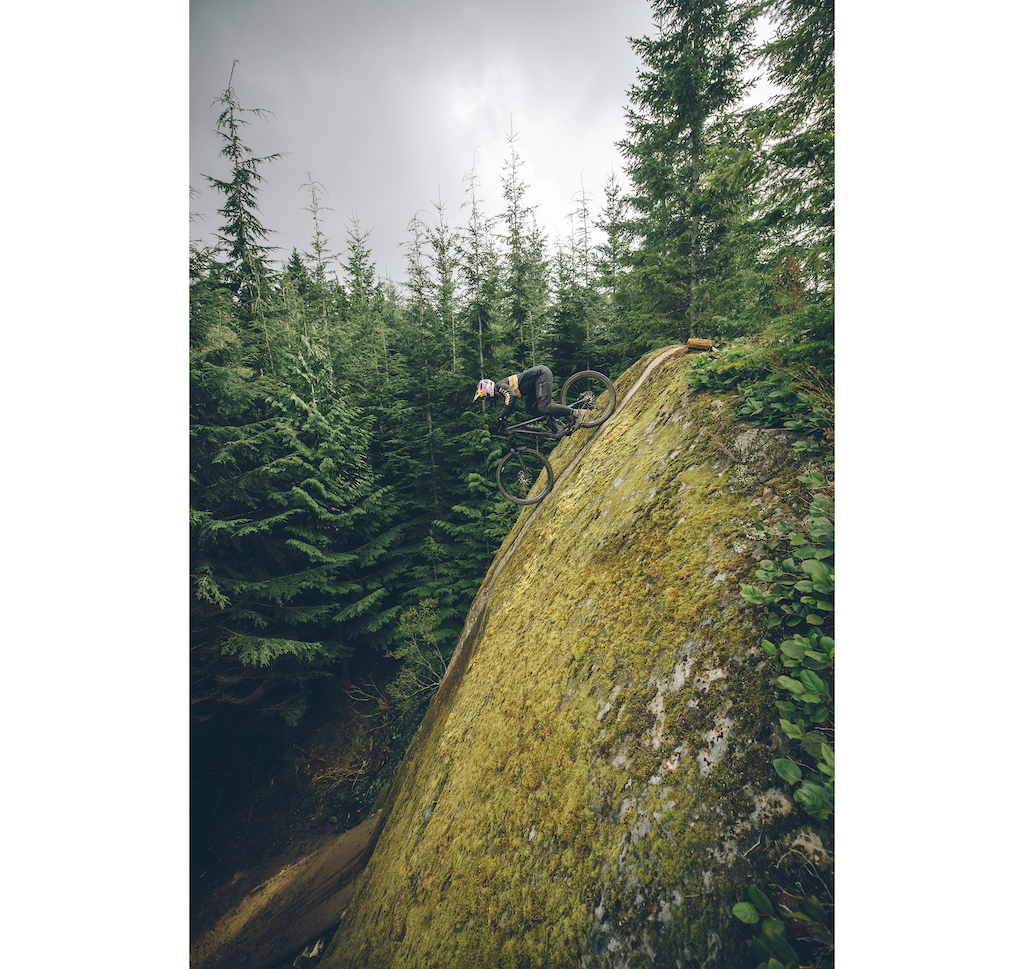 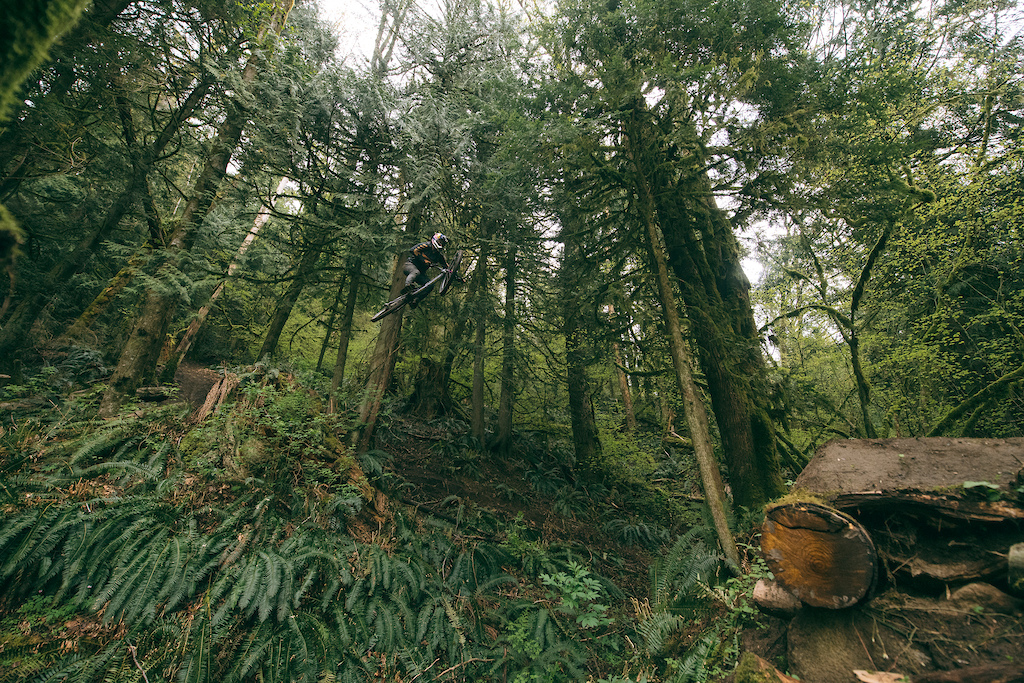 Hannah rediscovered one of Brad’s original features and spent a few days rebuilding the ravine gap in the woods on her own, much to Brad’s stoke. Hannah also spent some time this spring rolling through a scree field that Finn stumbled upon outside of town. These different pieces of terrain that Hannah builds and rides at home – ravine gaps, scree lines, and rock rolls – are the ingredients in her recipe to string together a Formation line.

“They are all important elements of that I like – trying to stay controlled on your bike while riding something that is loose and steep with some style. Hitting big jumps is a whole other component where you must judge your speed and have the correct pop and trajectory. The rock roll feature represents what it takes to ride a big technical line. All of those elements are what I wanted to bring to Formation and create a line where I incorporated everything.” 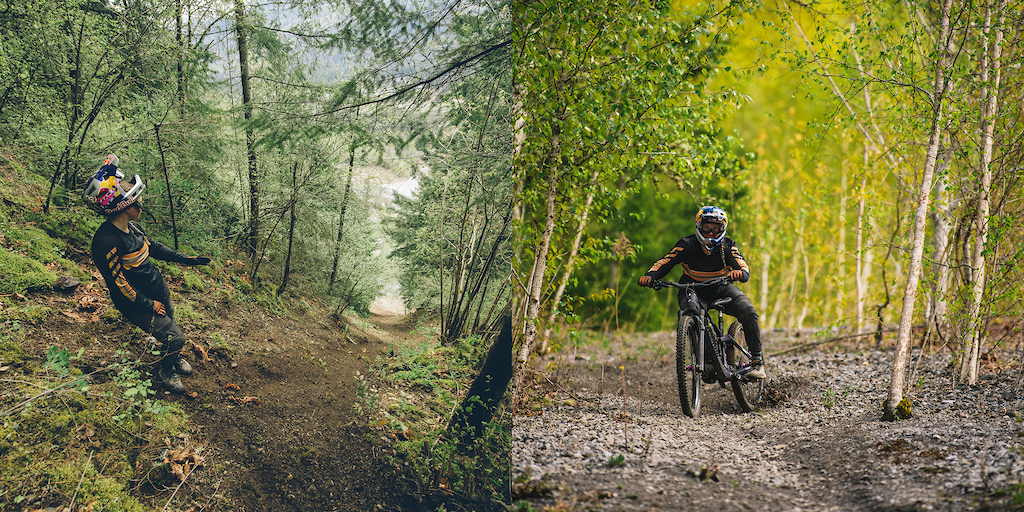 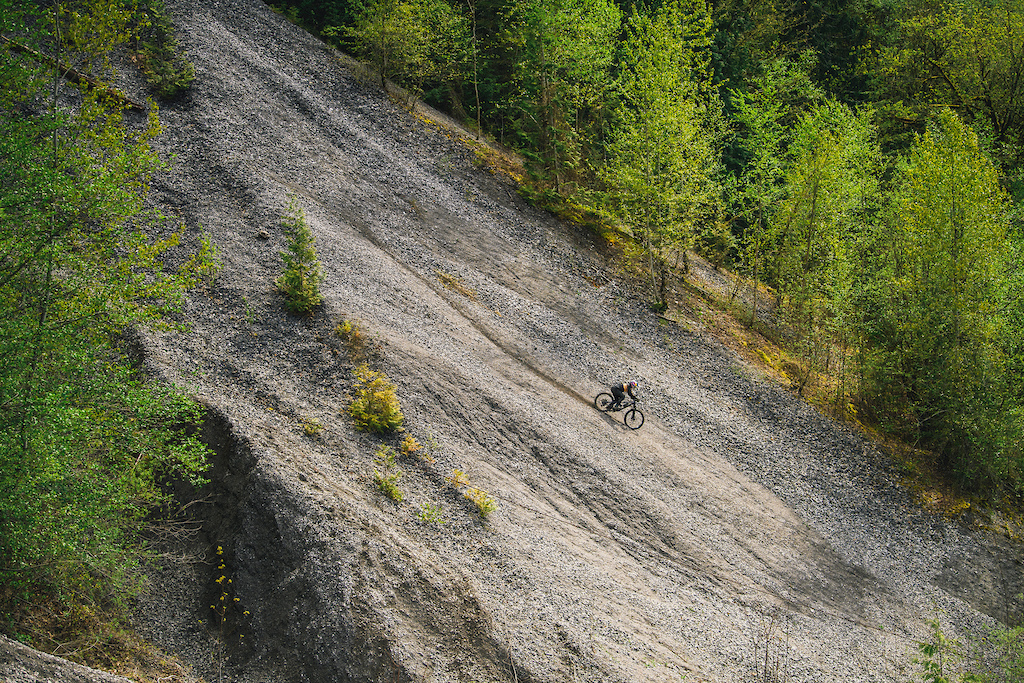 While it seems like Hannah just entered the sport as the dark horse, she has quickly become a veteran in the world of women’s freeride alongside one of her biggest role models, Casey Brown. “Casey was actually able to make it as a female freeride media athlete and that opened the door for everyone else to see that as a viable option.” As Hannah looks to her next chapter, she is already looking to pay it forward to the next generation of women freeriders. 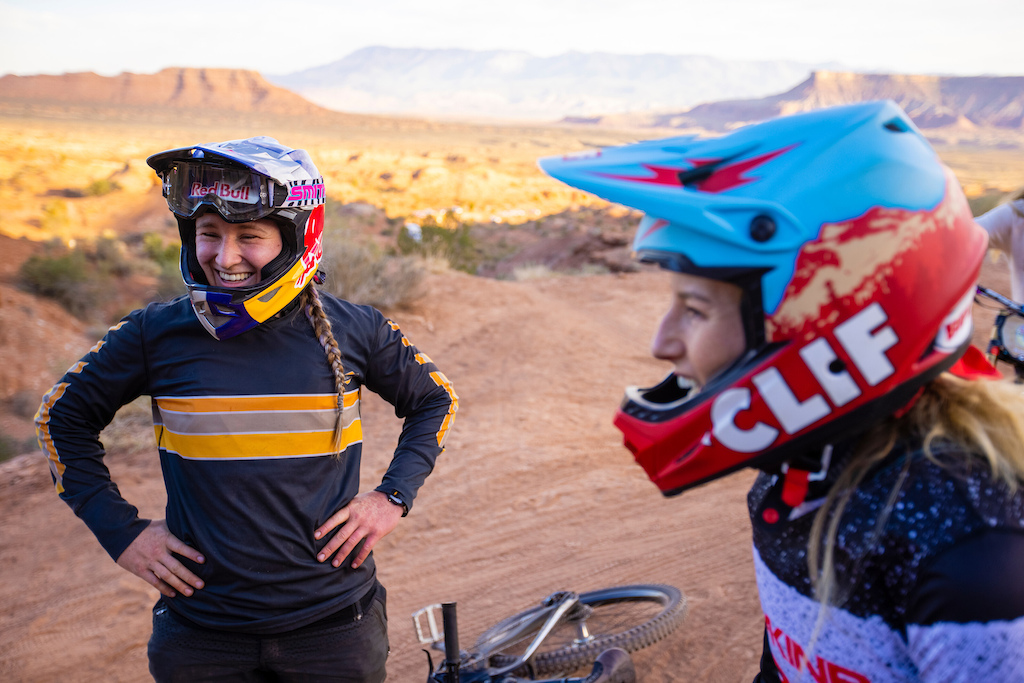 “The advice I would like to give to anyone who is pursuing a mountain bike career in any discipline - focus on what you enjoy doing the most. It seems intuitive, but it's important to establish what you're passionate about first, and then pursue that secondary as a career option. Having a passion is what's going to keep you motivated to do well and keep pursuing your goals when it gets stressful. Whatever gets you most excited and most stoked, pursue that direction.” 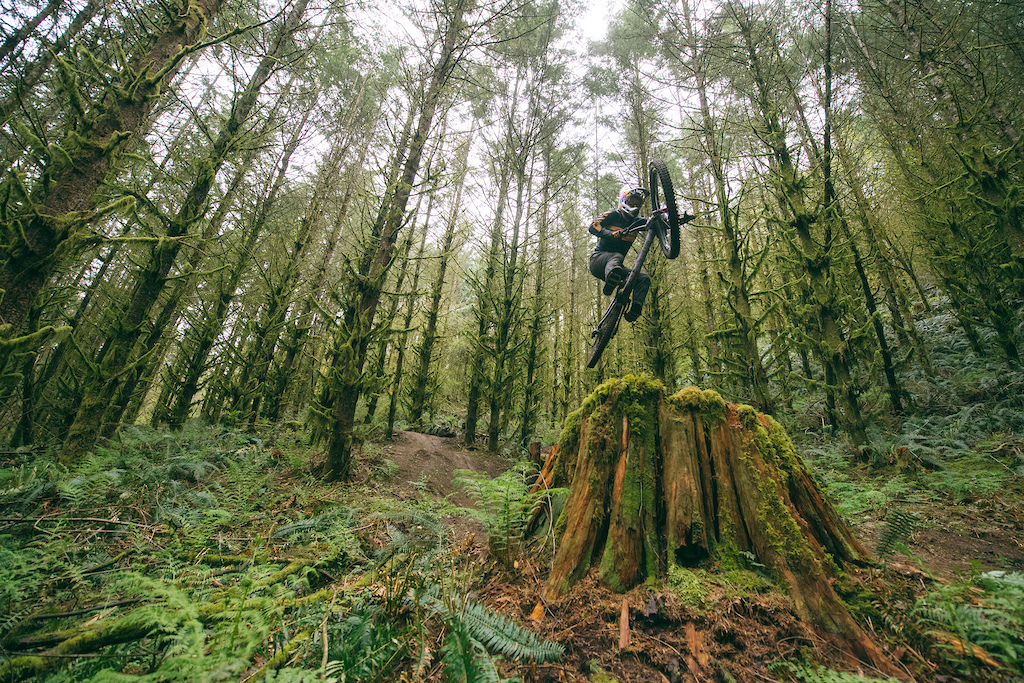 As Hannah gears up for other events – Proving Grounds, Crankworx, and the Fest Series – she looks to extend her experience to the next generation of freeriders with an event of her own. “I hope to see more of these styles of events – non-competitive but rad opportunities for the sport to progress, with the next group of up-and-coming girls working with the Pros.”

And hence, Hangtime presented by Red Bull and Transition Bikes, was born – a women’s freeride event scheduled for September 3-4 on Hannah’s local jump line, “Blue Steel.” This 2-day event will bring together some of the best female freeriders to ride, progress, and strengthen the community. 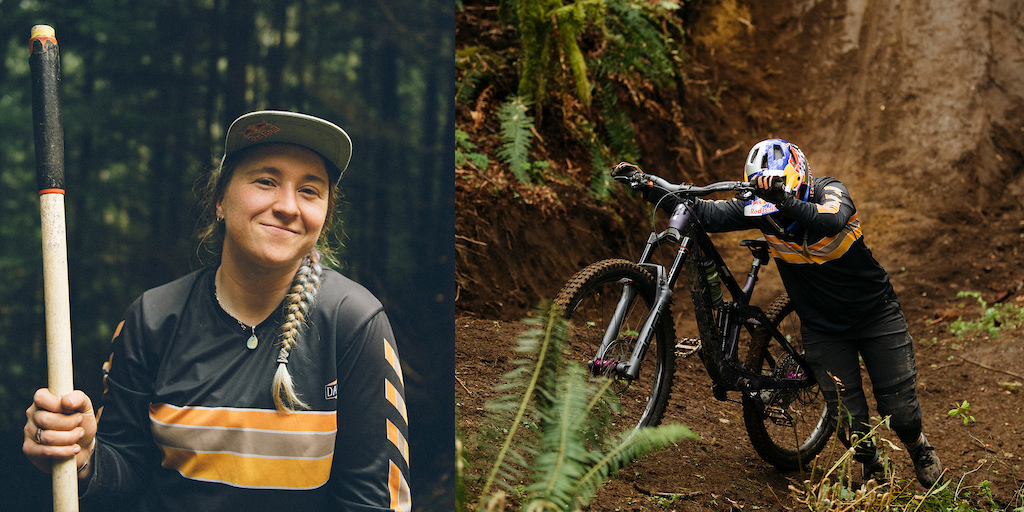 What’s next for Hannah? Only time will tell. Although something tells us it’s going to come with headlining more events, more epic adventures in distant lands, and continuing to shatter the glass ceiling on women’s freeride mountain biking. That we’re sure of. 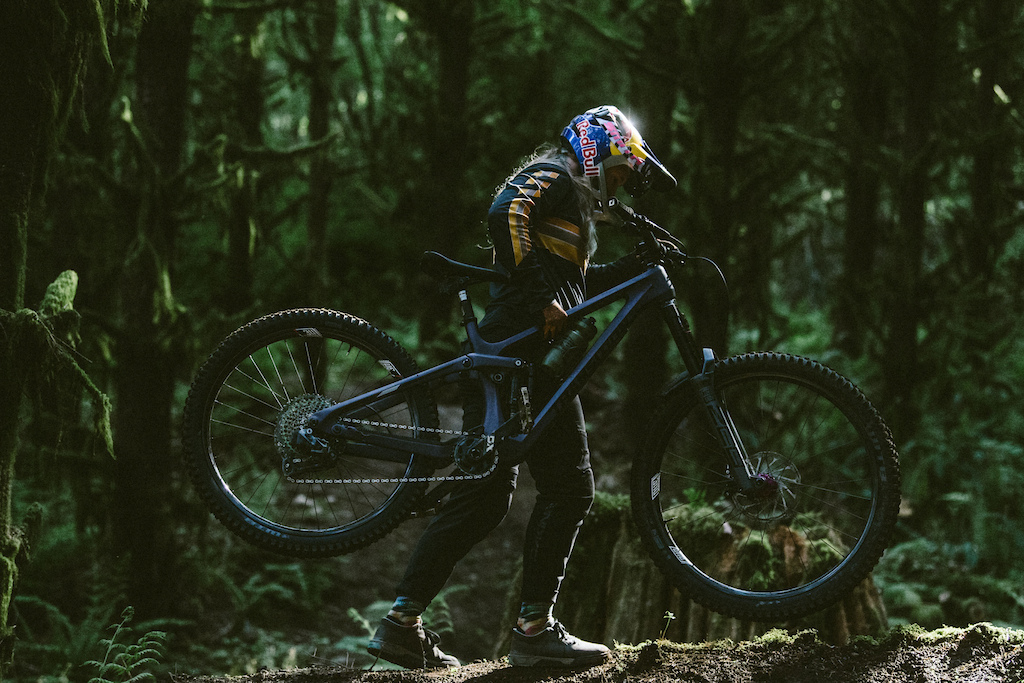 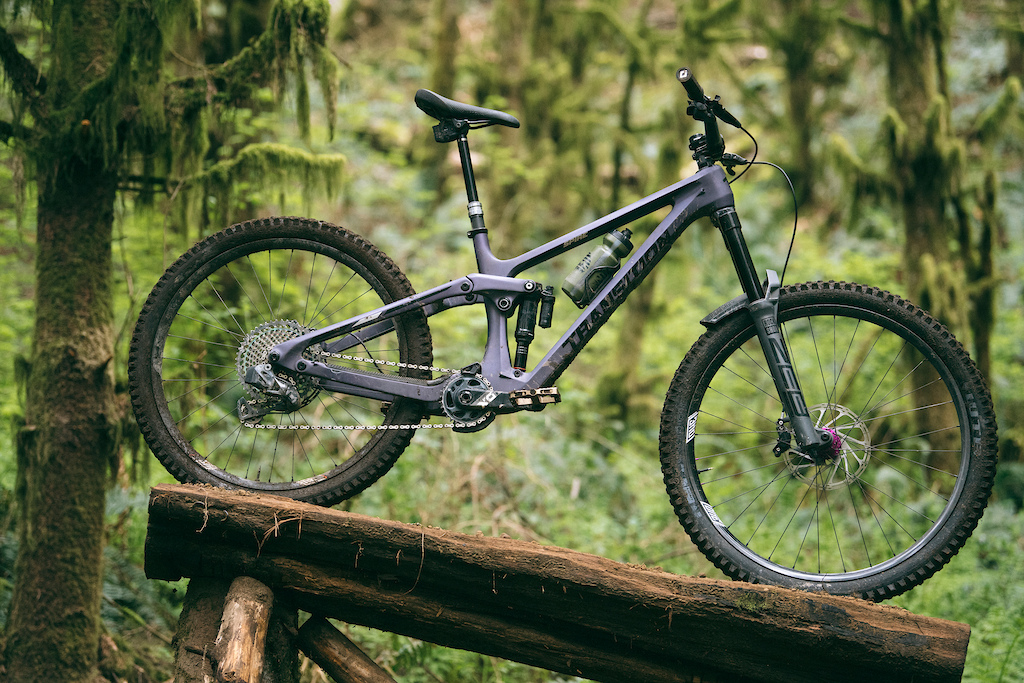 “I have a 27.5-inch wheel in the back and a 29-inch wheel up front. It maintains its snappy and playful cornering ability, but you still get that confidence and monster truck feel of the big wheel bike up front. You get the advantages of both without the negatives.

I really like ZEB – it suits my riding style well. It gives you that confidence that a dual crown fork gives you on a downhill bike. It feels solid and provides confidence with bigger stanchions and more travel. With the higher volume, I run my ZEB with a lot of volume spacers, so it has the progressivity to take big hits and compression when I’m riding big features. But I can still run low pressure, so it has a nice soft feel off the top and small bump sensitivity for trail riding.

I don’t know if my setup is advisable, but it works for me." 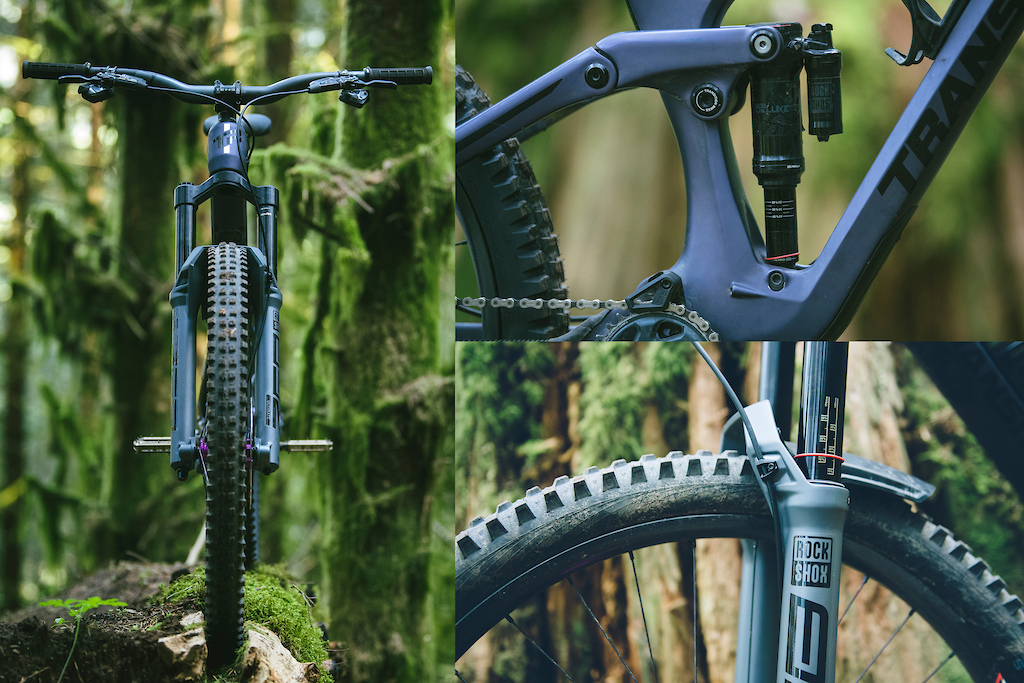 boomforeal (Aug 25, 2021 at 7:27)
straps on the redbull helmet and drives her bike to the trail on a scooter has transition build her a mullet bike and then throws a little wheel on a spire i like this bergman kid

zanda23 (Aug 25, 2021 at 8:20)
Cool article! Unfortunate that she has to go all the way down by Seattle to build because of the lack of an underground scene in Bellingham.

The Spire definitely does not take a 210x55 shock though.

55mm stroke would give about 150mm travel.

So she's made a shorter travel Patrol, kind of.

robbiekane (Aug 25, 2021 at 7:54)
Brad Walton is certainly a gnartist when it comes to trail building

PeterWojnar (Aug 25, 2021 at 12:24)
Freakin' awesome. Appreciate the hell out of these photo/written stories, they just feel nice to read & look at!

misteraustin (Aug 25, 2021 at 7:53)
Dude I freaked love the bike on the scooter setup. Who cares if it wears out the rear tire! So awesome.
I think she's got @brianpark and his TW beat for most sketchy bike mount

Heybud (Aug 25, 2021 at 8:25)
Wait... so she rides a mulleted Spire? Why not just ride a Patrol? It seems like she had a big hand in developing the Patrol considering she works for Transition and is the star of their Patrol launch video.

TransitionBikeCompany (Aug 25, 2021 at 9:24)
We didn't have any new Patrols available yet at the time Hannah was doing this project, and she was curious to try the mixed wheel set up on the new Spire!