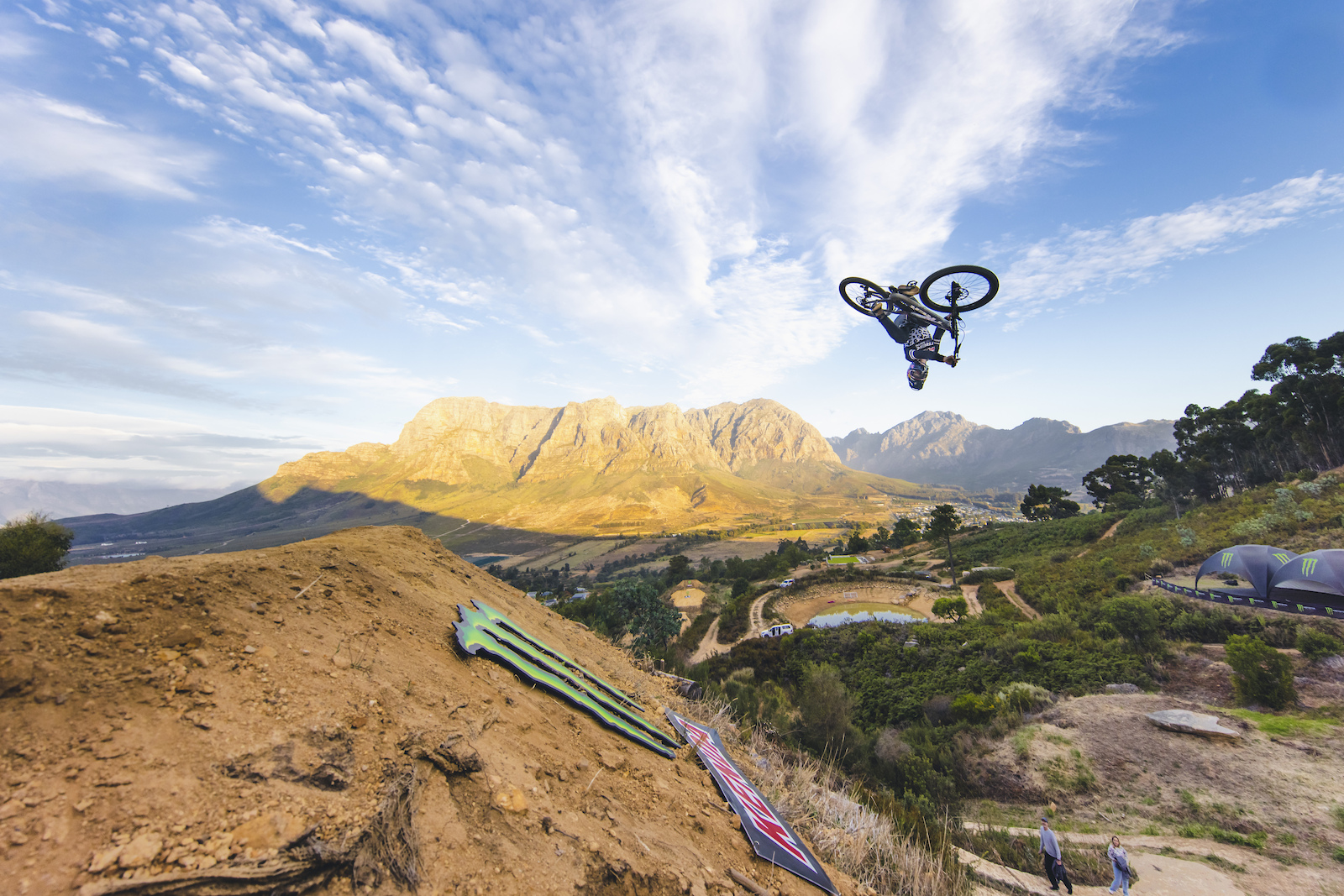 DARKFEST
PHOTO EPIC
Another year and another edition of Darkfest is in the books! The week consisted of big sends, first time hits, an insane amount of unbeatable whips, flips and spins, and of course some downtime hair styling. It's safe to say that freeride is enjoying somewhat of a resurgence within the MTB community, and rightly so, with the current abundance on talent on two wheels, but this time, the surge in freeride has brought with it not only rad new male riders, but the rise of women's freeride.

For the first time in the event's history, women were invited to hit the Darkfest course, with Veronique Sandler, Casey Brown, Hannah Bergemann, Chelsea Kimball and Robin Goomes being amongst the first women to hit the notorious course. But the newcomers didn't stop there, with the Ruso brothers Daniel and Elias, along with desert-loving Reed Boggs all hitting the course for the first time.

The riders enjoyed calmer weather at the beginning of the week, getting in as much session time early in the morning before the heat became too hot to handle before retreating to the nearby pool before heading back out late in the afternoon to throw down insane evening sessions. By the time the public event days rolled in, so did the weather, with the gusts picking up making only the step-up a safe option to ride, thankfully the riders had a large selection of tricks to throw down and practice on the most session-able jumps on the course.

The energy on course throughout the week was electric. The buzz from the girls hitting features such as the "Rocket Launchers" and the "90" for the first time hyped up the entire crew as the guys celebrated the women and vice versa. There's often a lot said about how amazing it must be for the women to have the guys on hand at such events for advice, and whilst that is of course true, with the women turning to the guys for advice on bike setup and speed for the Darkfest course given their years of experience riding it, the benefit is not one-sided. Watching the men and women ride together depicts a perfect balance of riding styles and experience that is shared freely through the group. Sometimes, (not always), the women may deliberate longer over a trick before dropping in, ensuring that they know the jump well enough before they drop in to style it up and this deliberation pays off. A perfect example of this was Nicholi Rogatkin's feedback after the women hit the Rocket Launchers jumps for the first time, as a stoked Nicholi watched from the bottom of the course, congratulating the girls on their push back up to the uplift saying "For the conditions today you could not have hit that any more perfect."

But that doesn't mean that the women hold back by any means, as Kiwi Robin Goomes eloquently summarised: "sometimes you've just got to hit "f*ck it mode" and go for it." The blending of such approaches between riders from all backgrounds with varying experiences helps improve everyone's riding and approach regardless of gender. Any hype and advice, whether it be from bike set-up, speed or mental tips that is given out between riders is always returned, proving once again that like everything in life, the MTB community is stronger when working together, and to top it all off, Darkfest provided equal prize money for respective male and female awards categories. 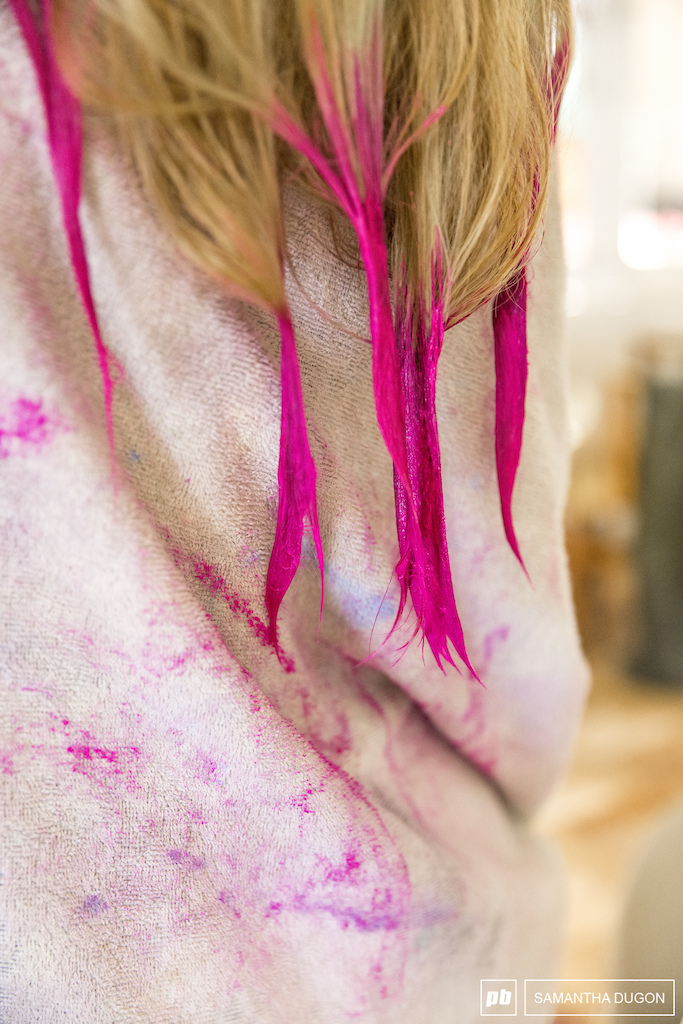 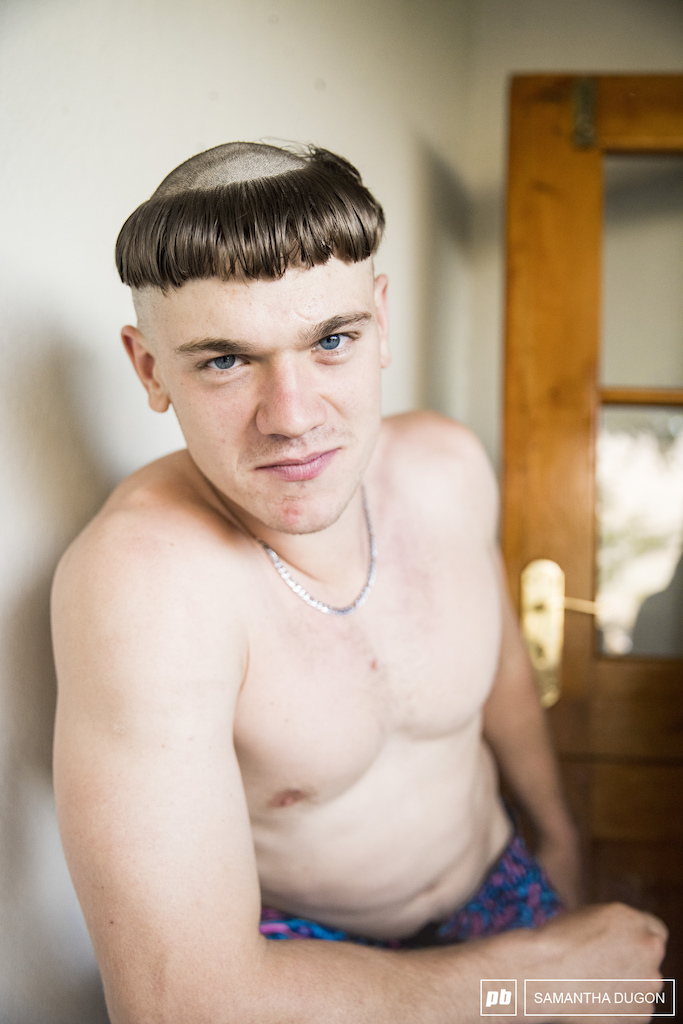 It wasn't just the riding that kicked up a notch this year, but the hairstyles 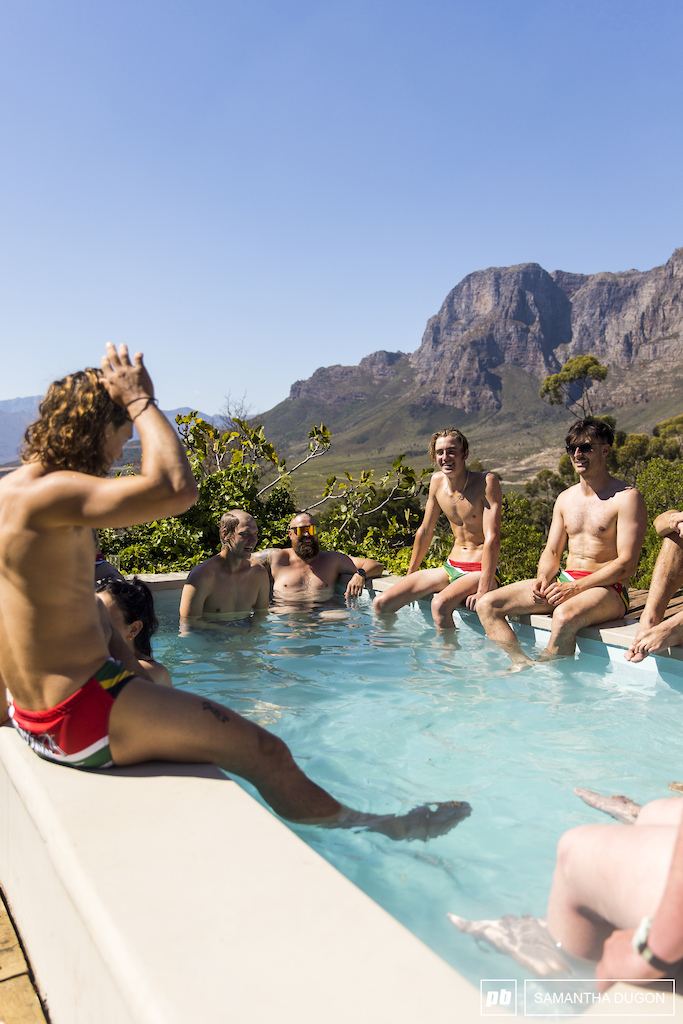 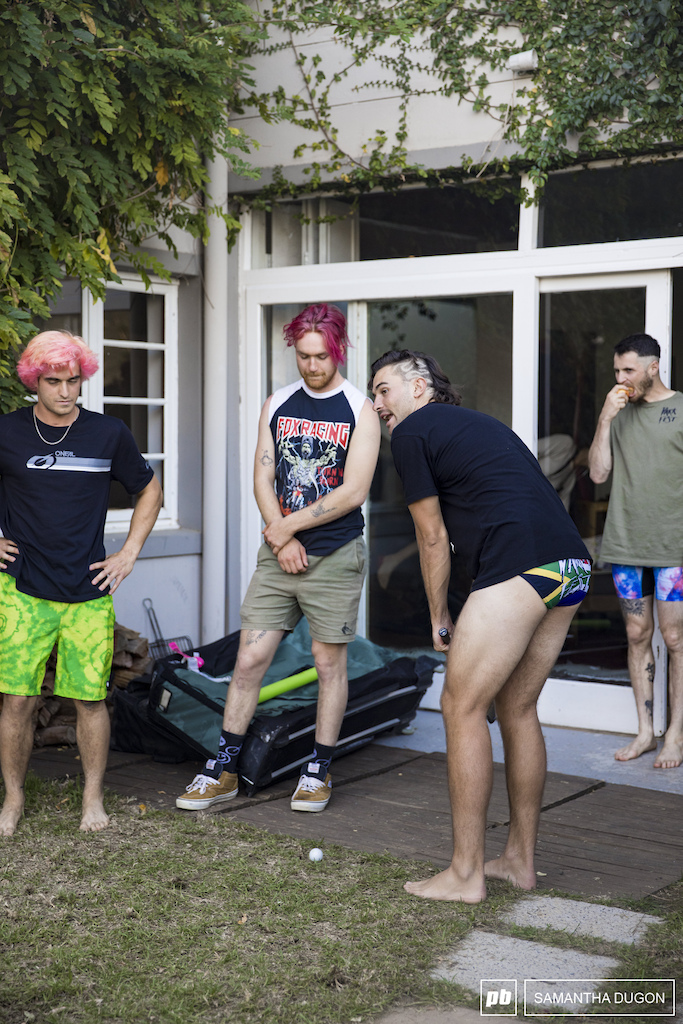 The only way to chill in the sun at Darkfest is in custom South African Darkfest speedos, as is a spot of golf 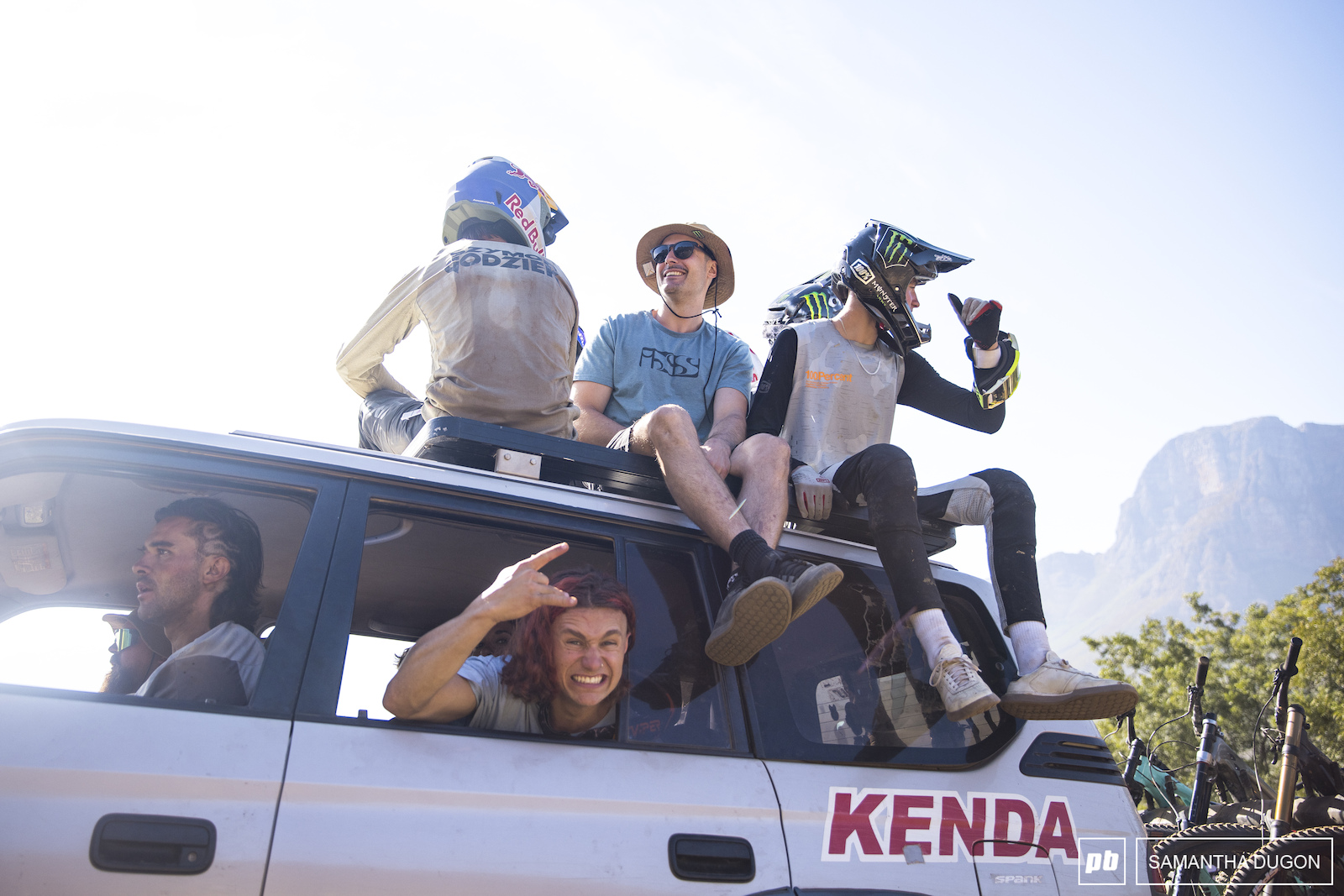 Darkfest has the best shuttles going 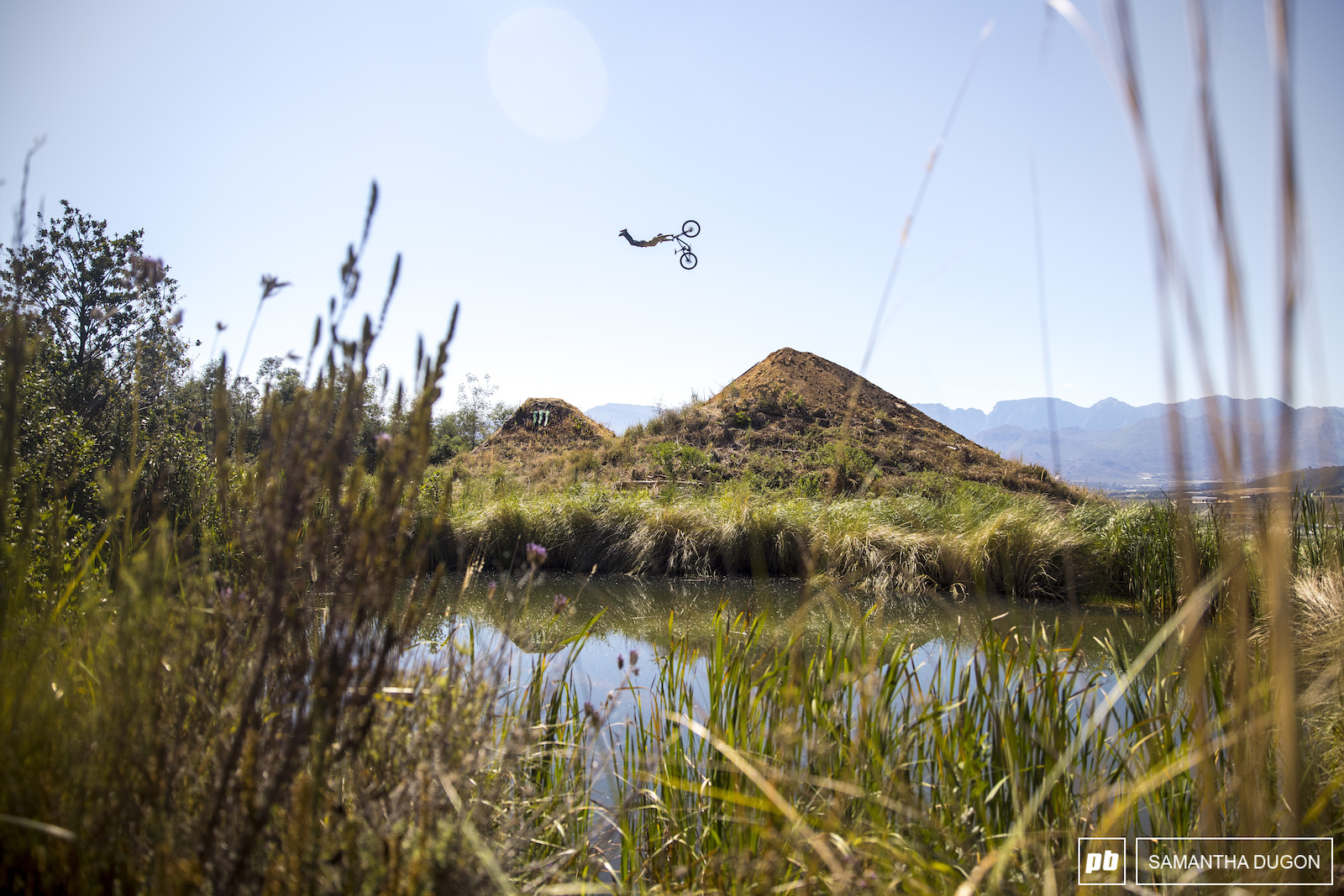 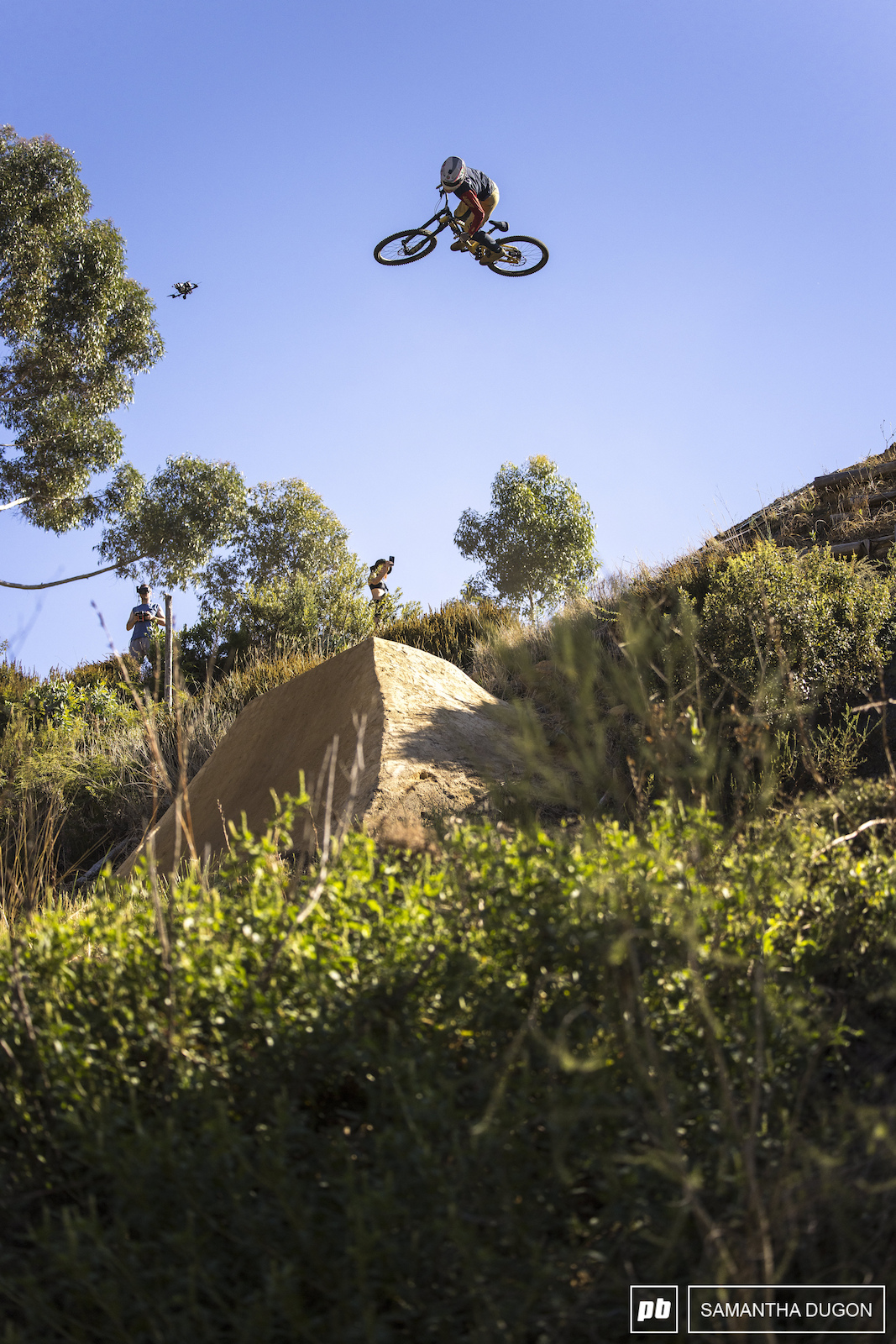 When Clemens Kaudela, AKA C-dog drops in, you know whatever is about to happen will be full of style. 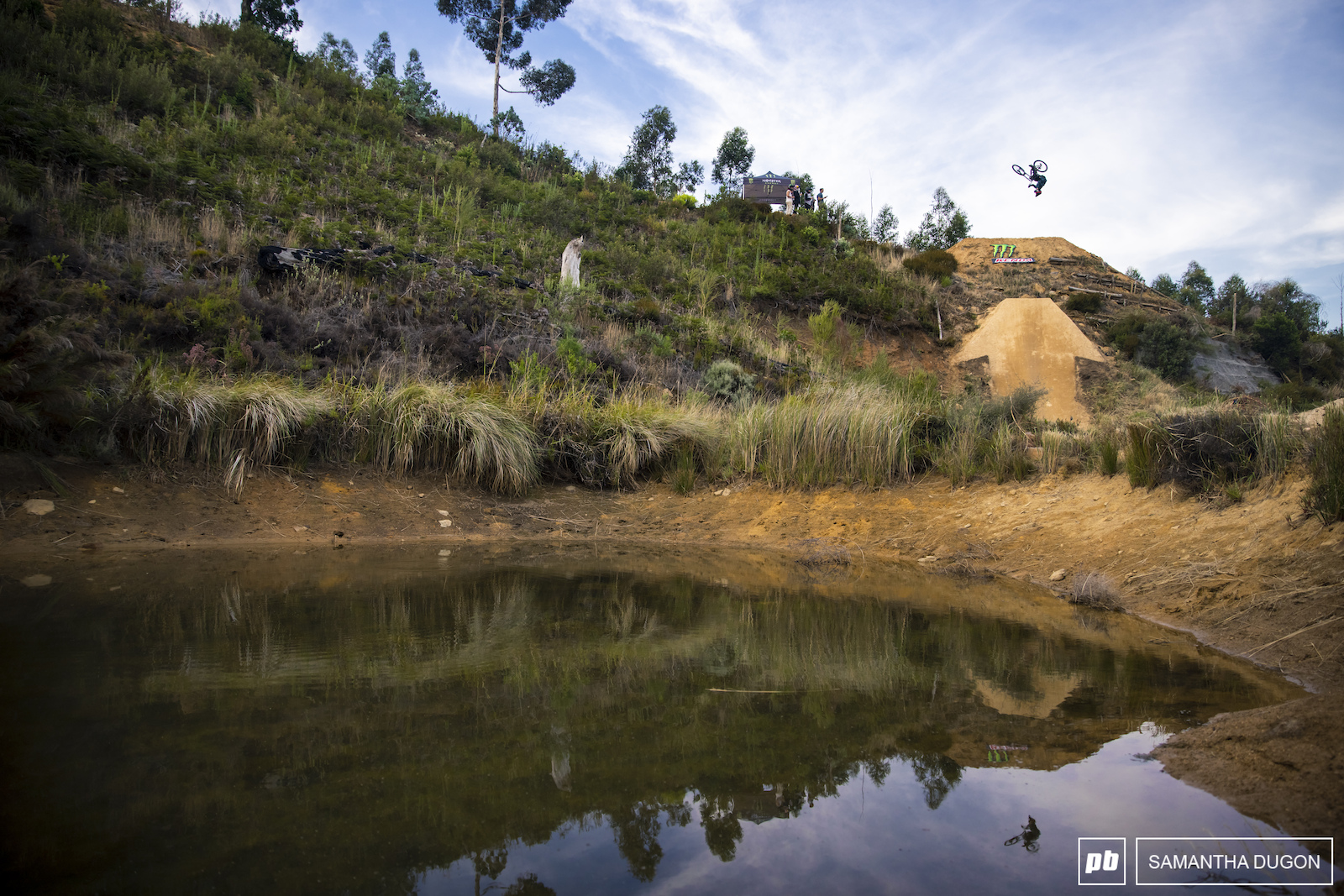 Cornish bred Tom Isted was going big on every single run and as a result took home the NS Bikes Stay True Award. However, towards the end of the week the the last Rocket Launchers got the better of his foot and now has his mind set on redemption next year. We wish you a speedy recovery! 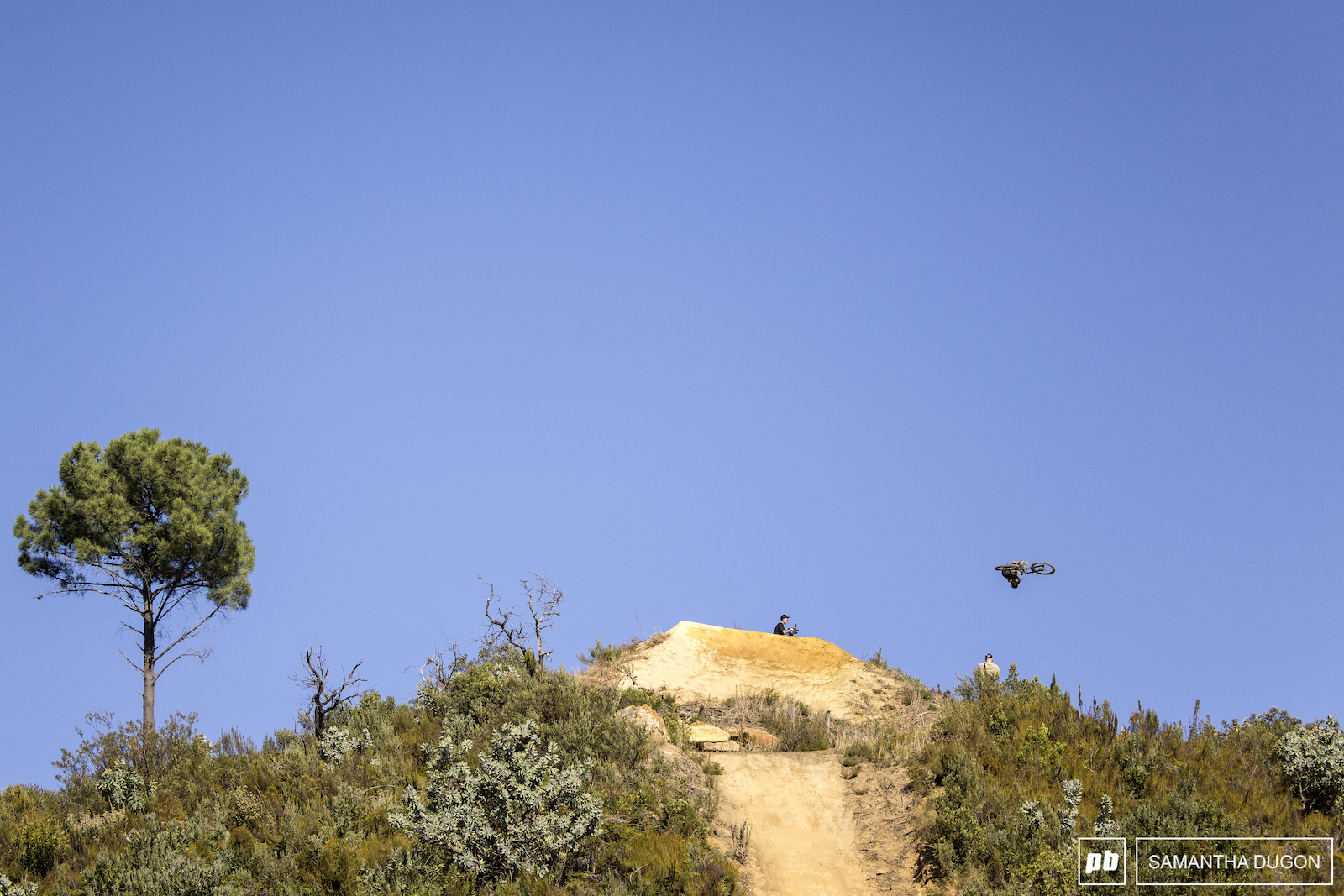 I don't think there's anyone more eager to not only get out and ride, but to help others get out and ride than Bienve Aguado, it's no surprise then that he came away from the event with the King of Darkfest award

Chelsea Kimball, aka "Chelsea Sends It" did exactly that this week. No matter the day, the weather, the hangover situation, Chelsea was at all times ready to hit the trails. Combined with her opening up the Rocket Launchers for all the women and her style, it's no surprise that Chelsea won the Queen of Darkfest award. 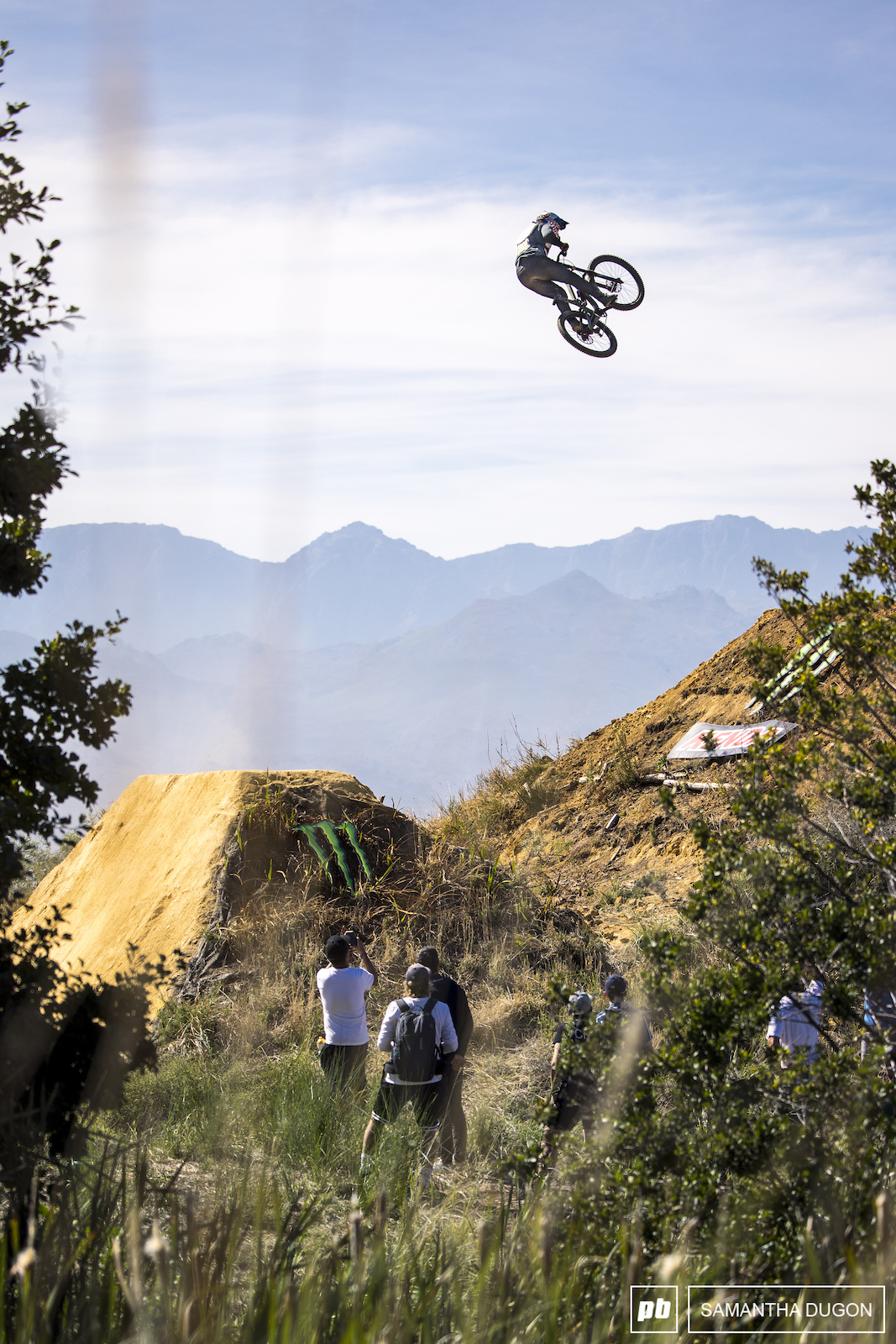 Hannah Bergemann hitting the Rocket Launchers for the first time 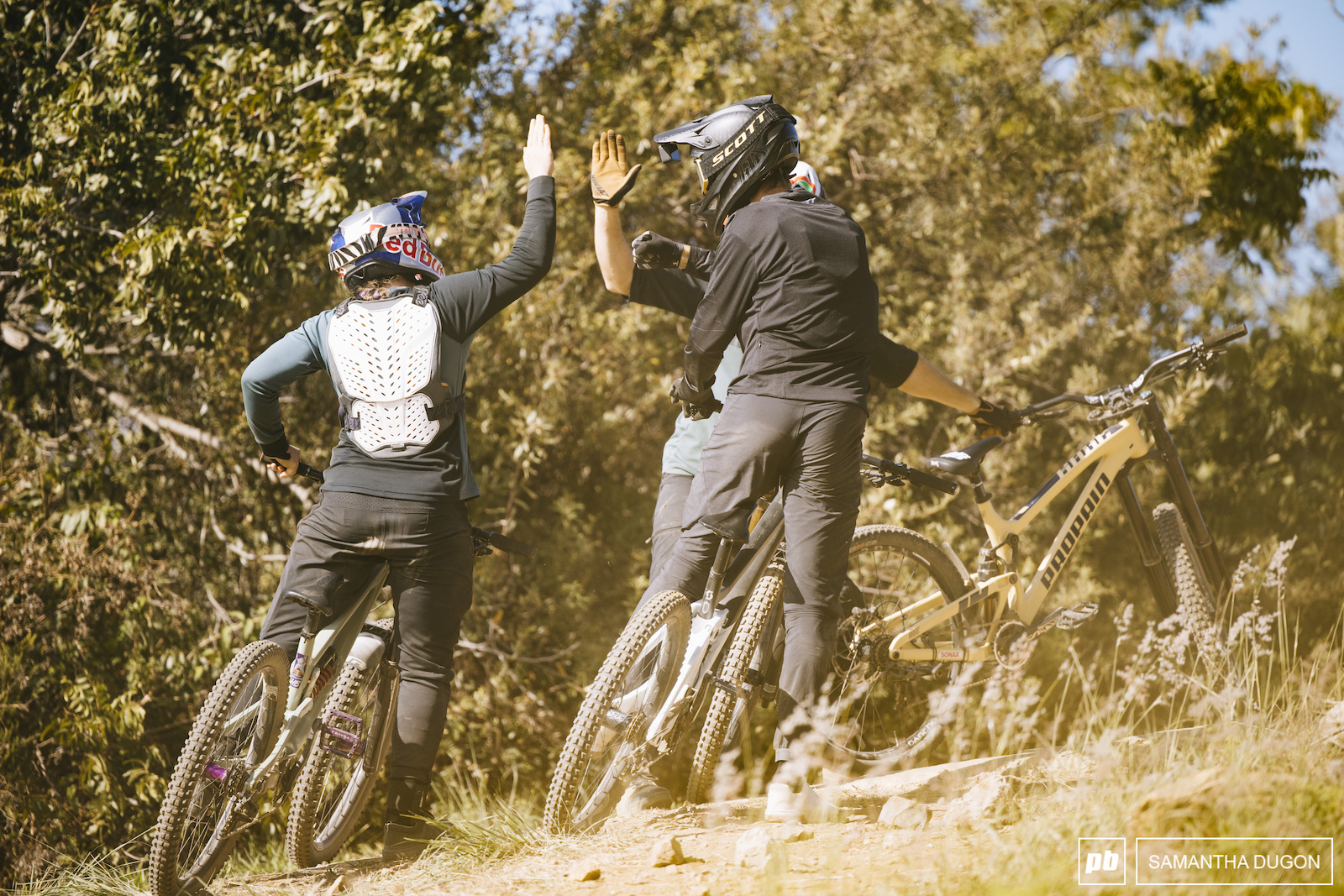 Post Rocket Launchers celebrations as history had been made 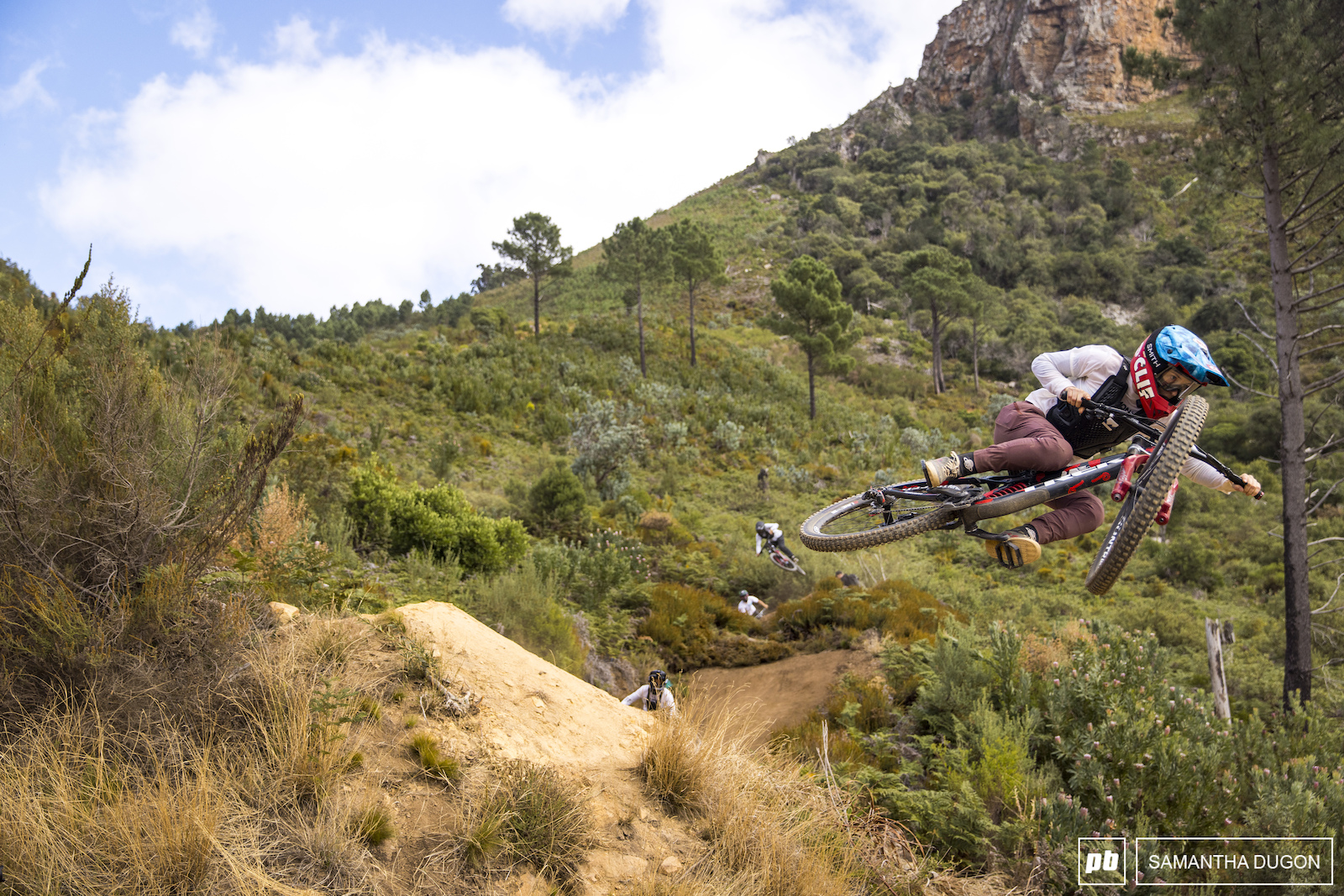 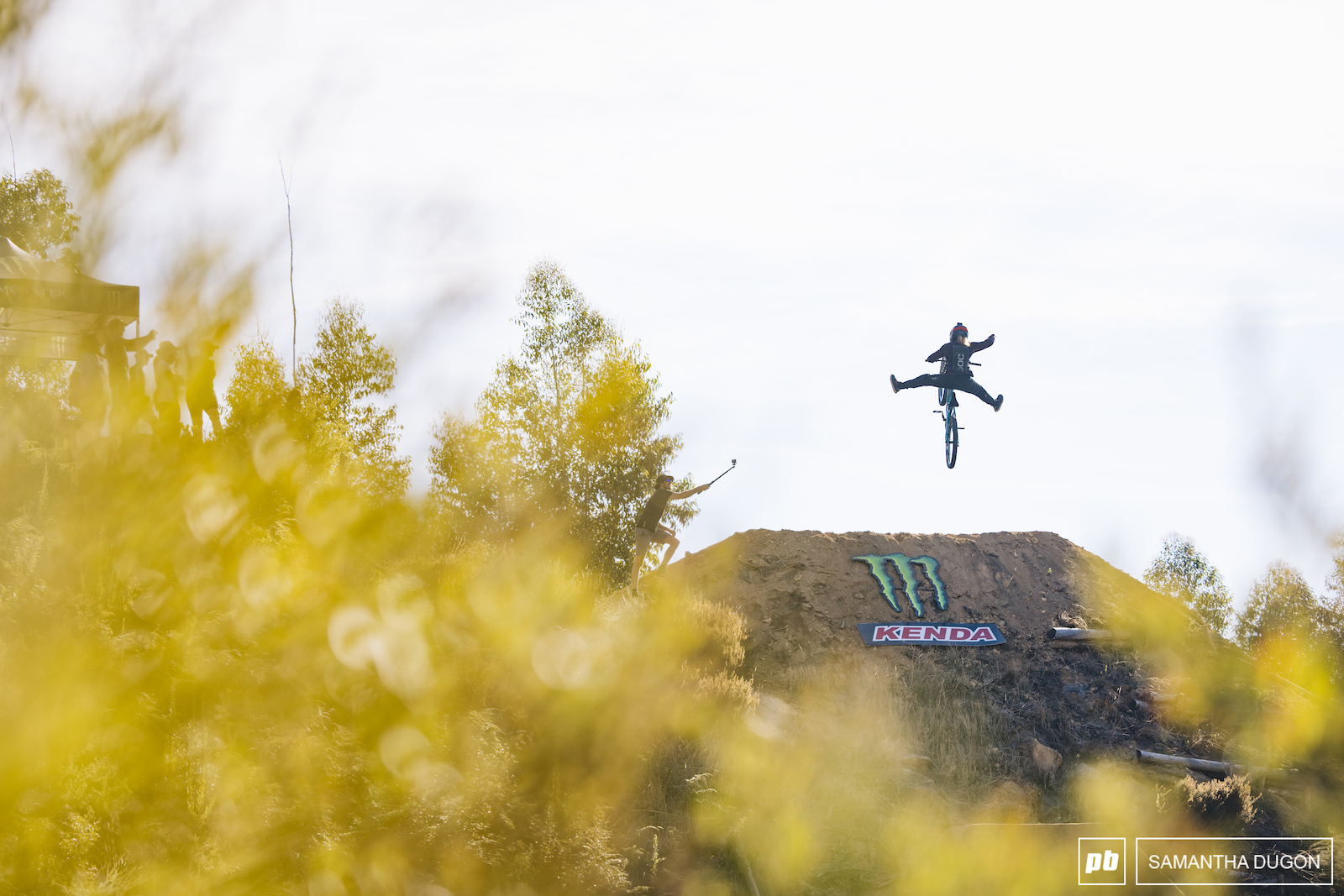 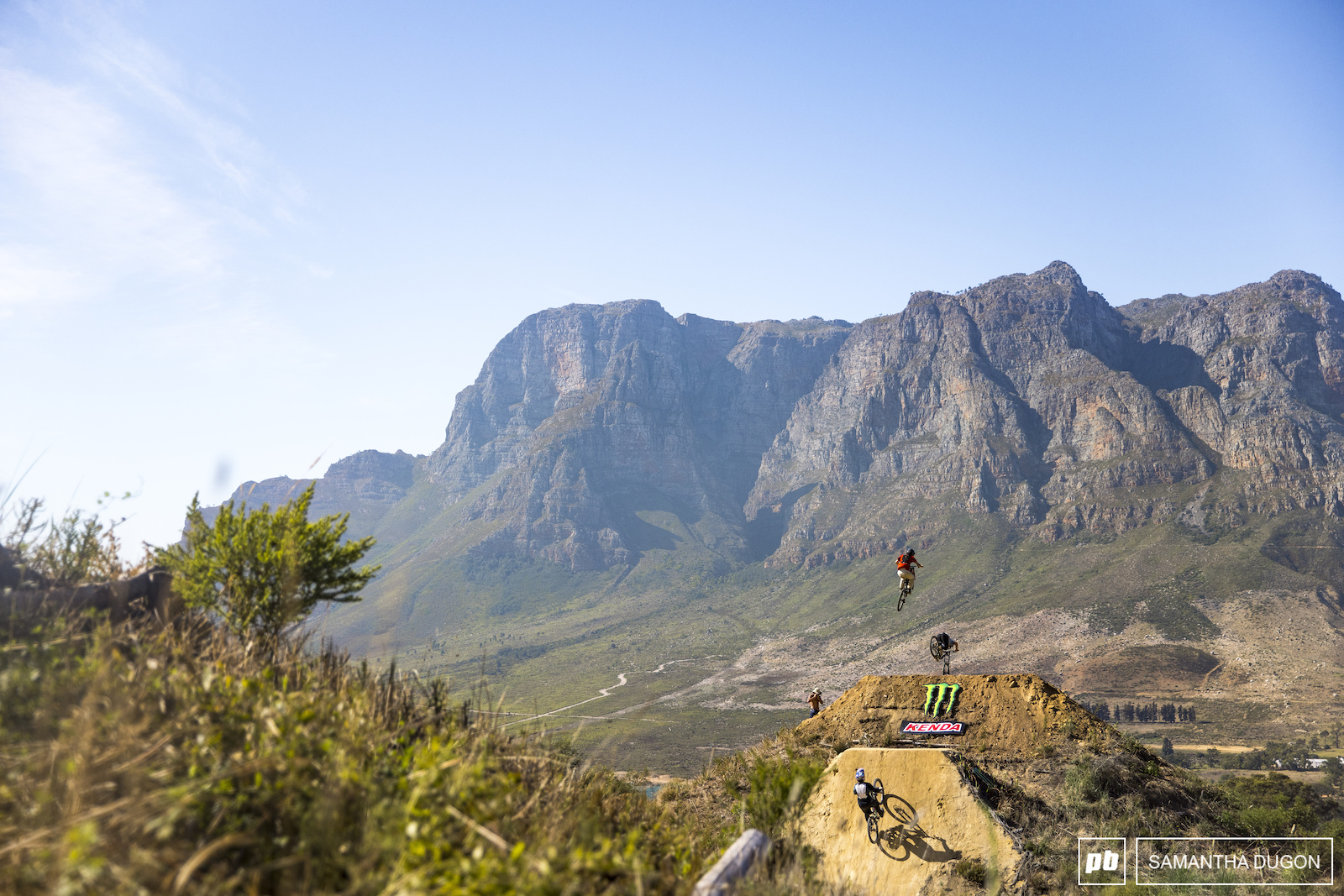 Girls train on the Rocket Launchers 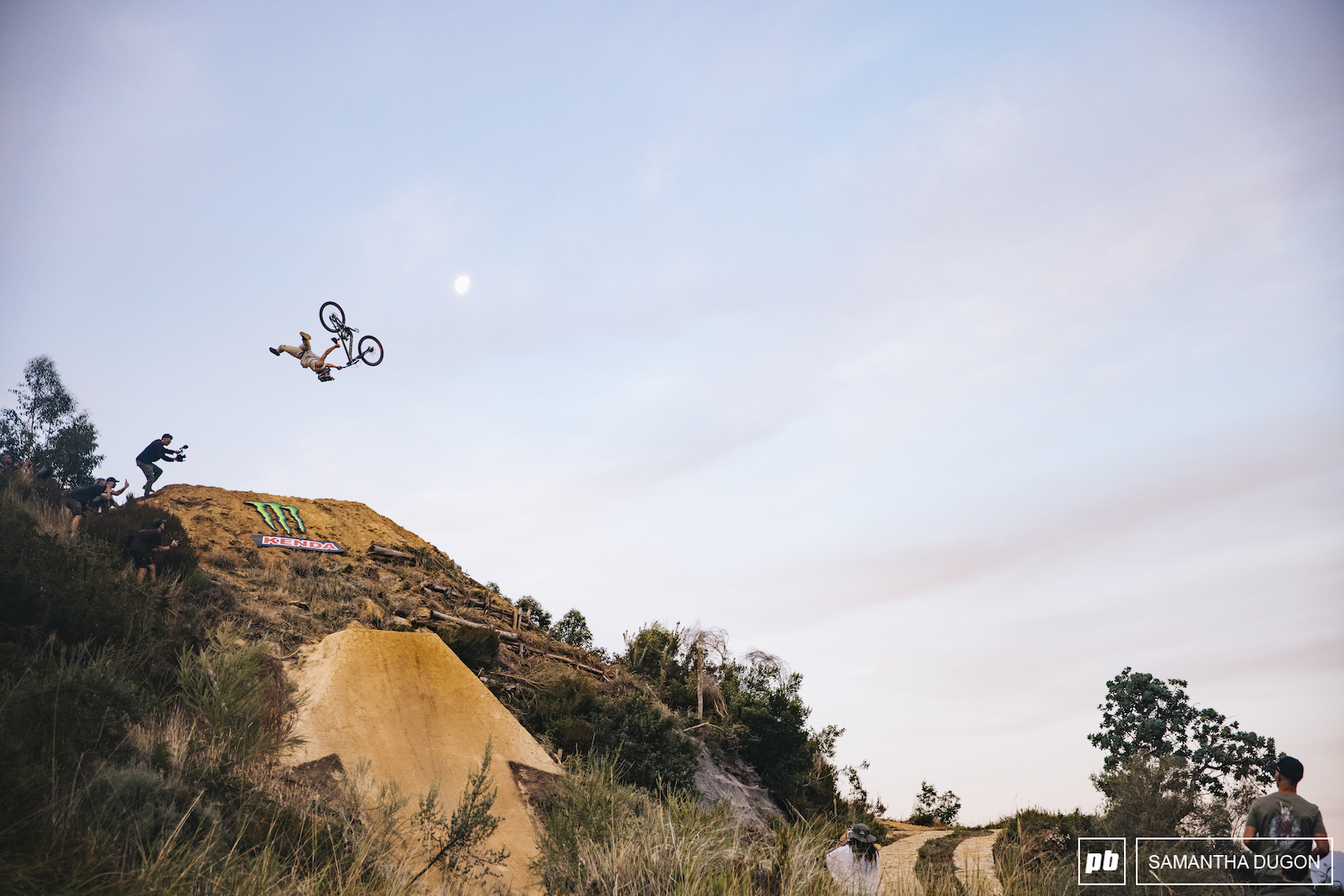 New Monster athlete Sam Hodgson turned up to Darkfest with two bikes this year, his DH rig and his dirt jump bike and couldn't resist to give the course a go on the latter. It's no surprise after smashing our one of the gnarliest freeride courses on a hardtail that he went and won the "Moment Award" 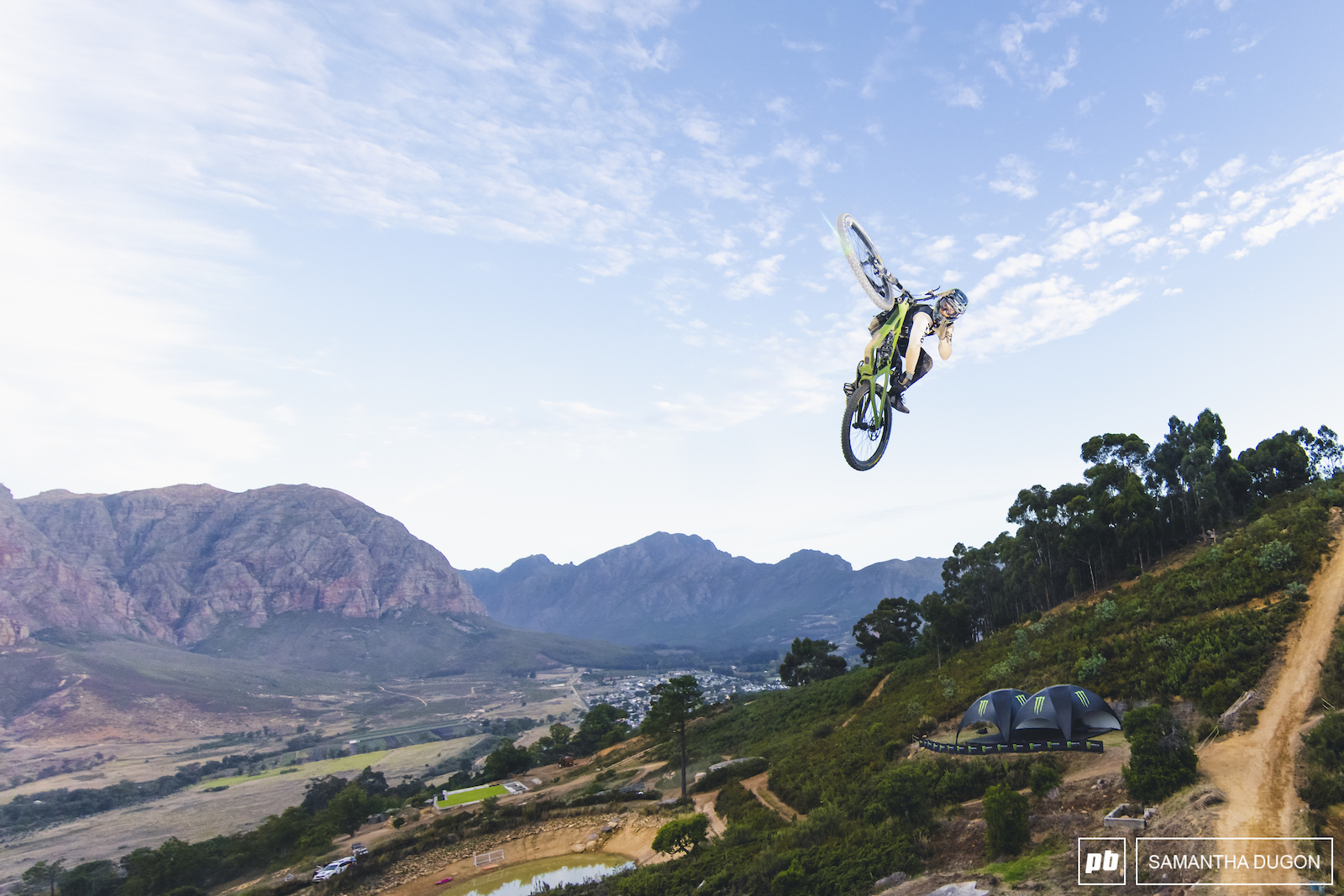 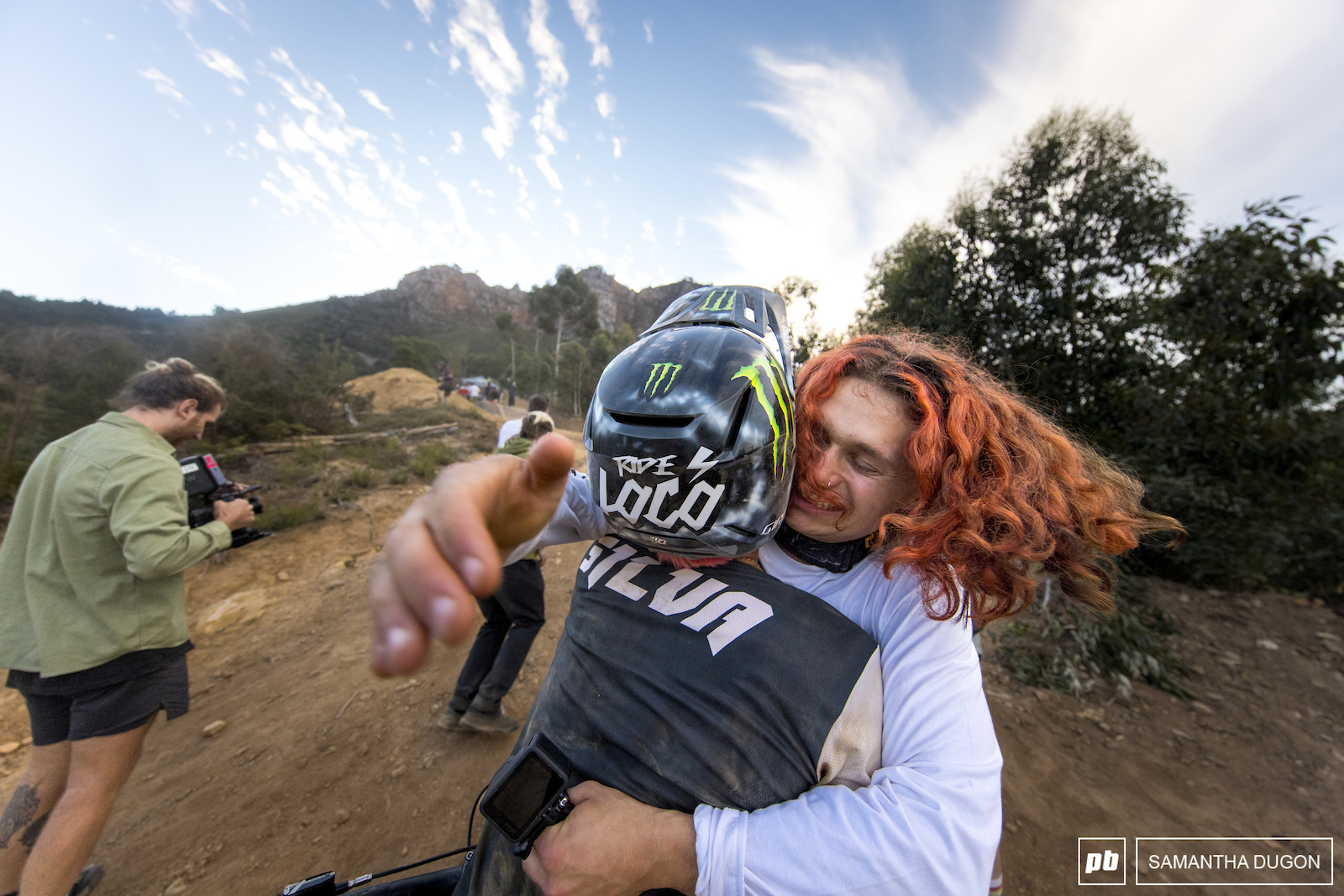 After sustaining multiple fractures on the Rocket Launchers in 2021, Adolf Silva returned to the Darkfest course with a vengeance, and boy did he conquer! Nailing not only a Cali Roll on the step-up, but also a double flip on the Rocket Launchers saw Adolf firmly place himself in the awards category, taking the men's Kenda Tires Best Trick award at the end of the week. 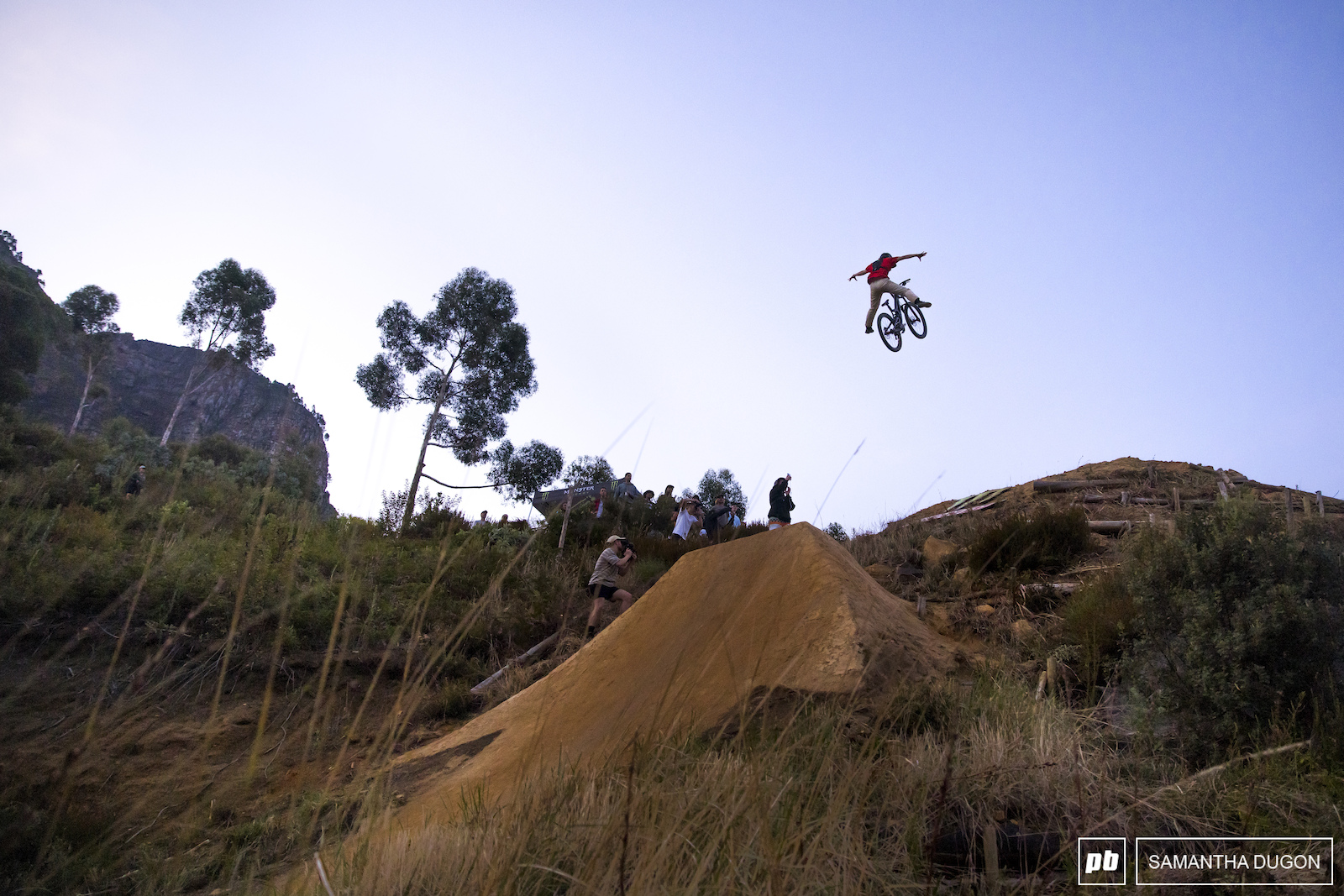 Veronique's "Nothing" on the stepup which saw her claim the women's "Best Trick" award at the end of the week where she won not one, but two awards with her step-up whip winning her the "Best Whip" title. 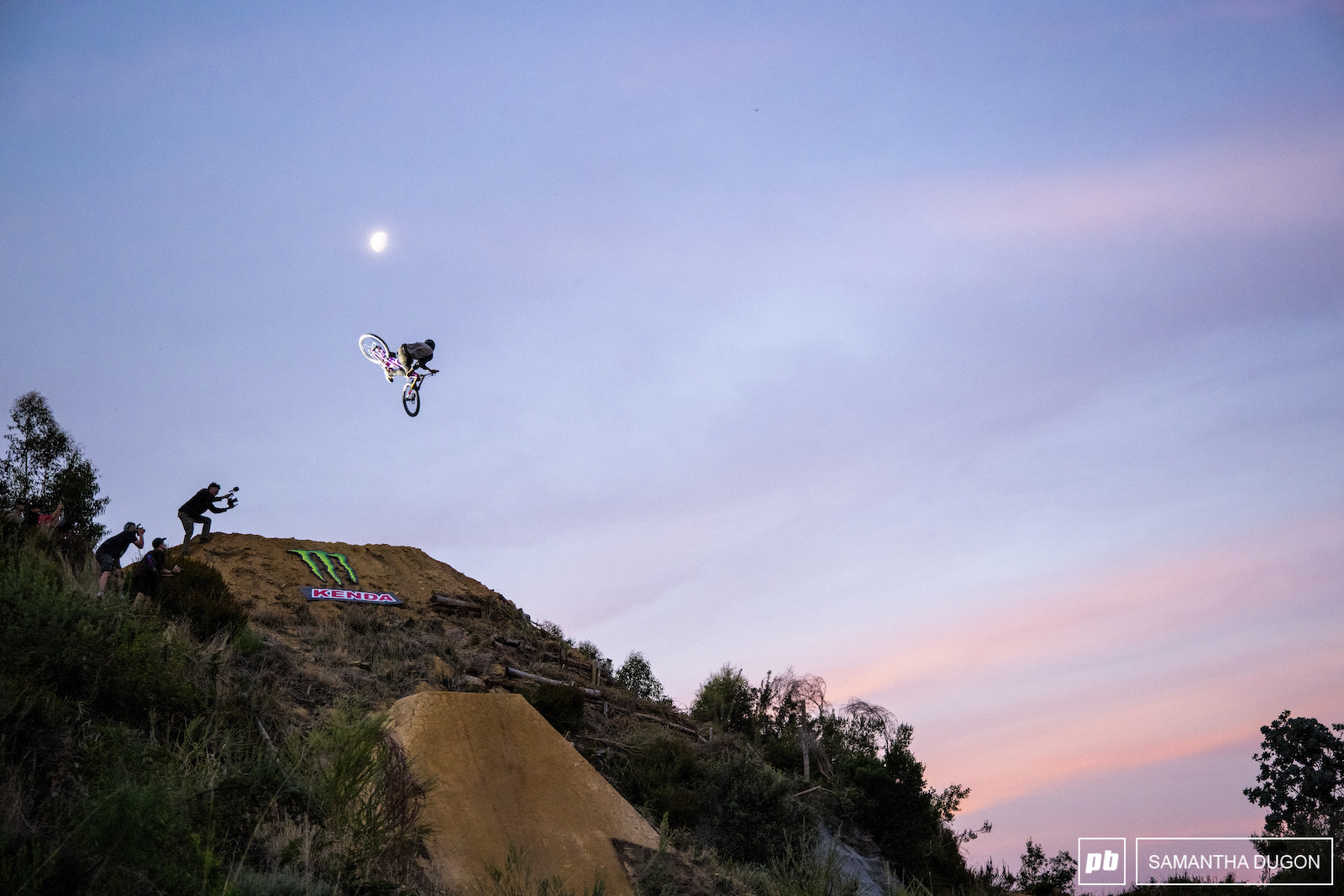 It's probably of no surprise to anyone that kind of whips, Kaos Seagrave, took the award for Best Whip at this year's Darkfest. Despite suffering from an injured shoulder which saw him spend more time on the sidelines than he'd have liked, he made sure he still got in some serious airtime to throw down. 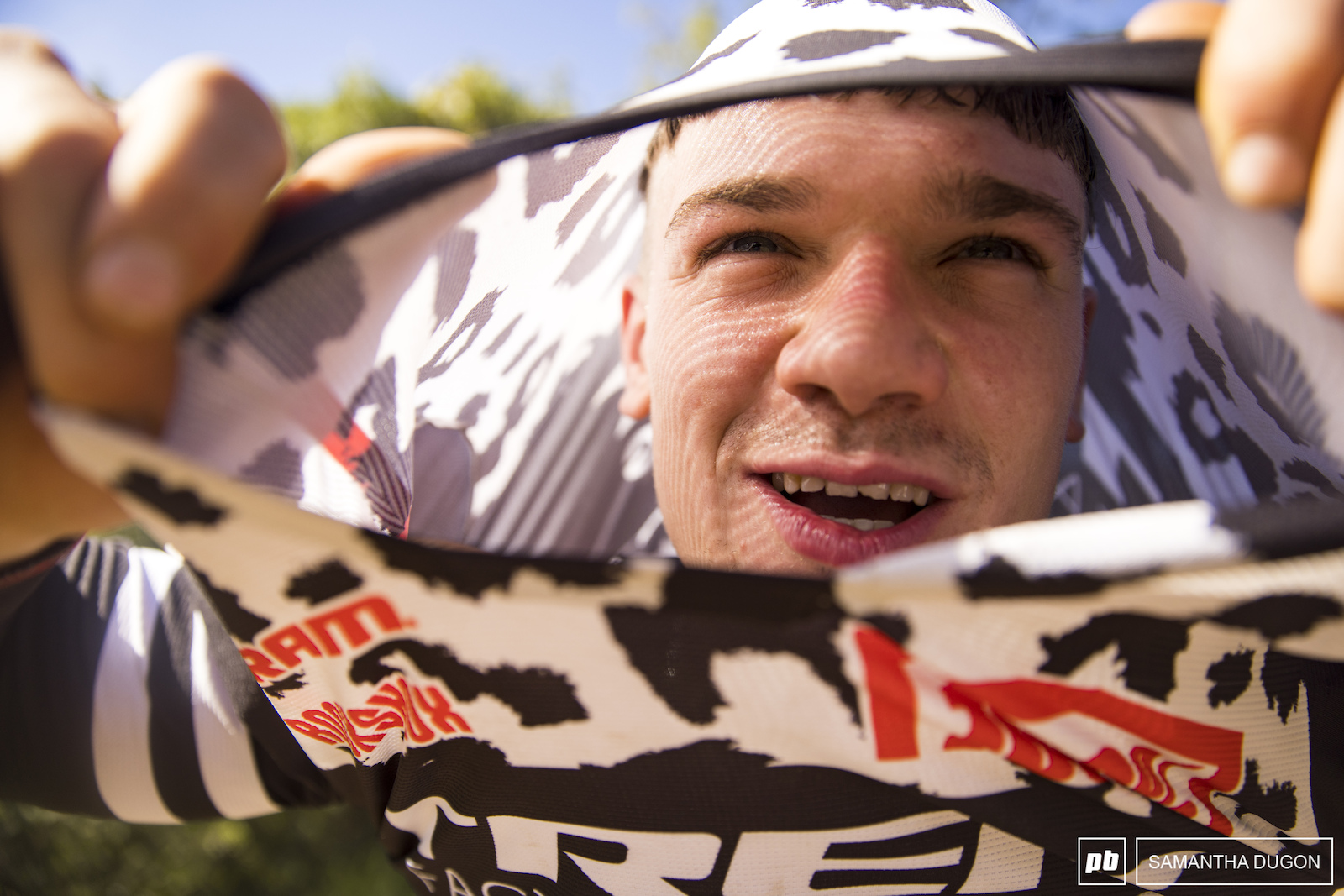 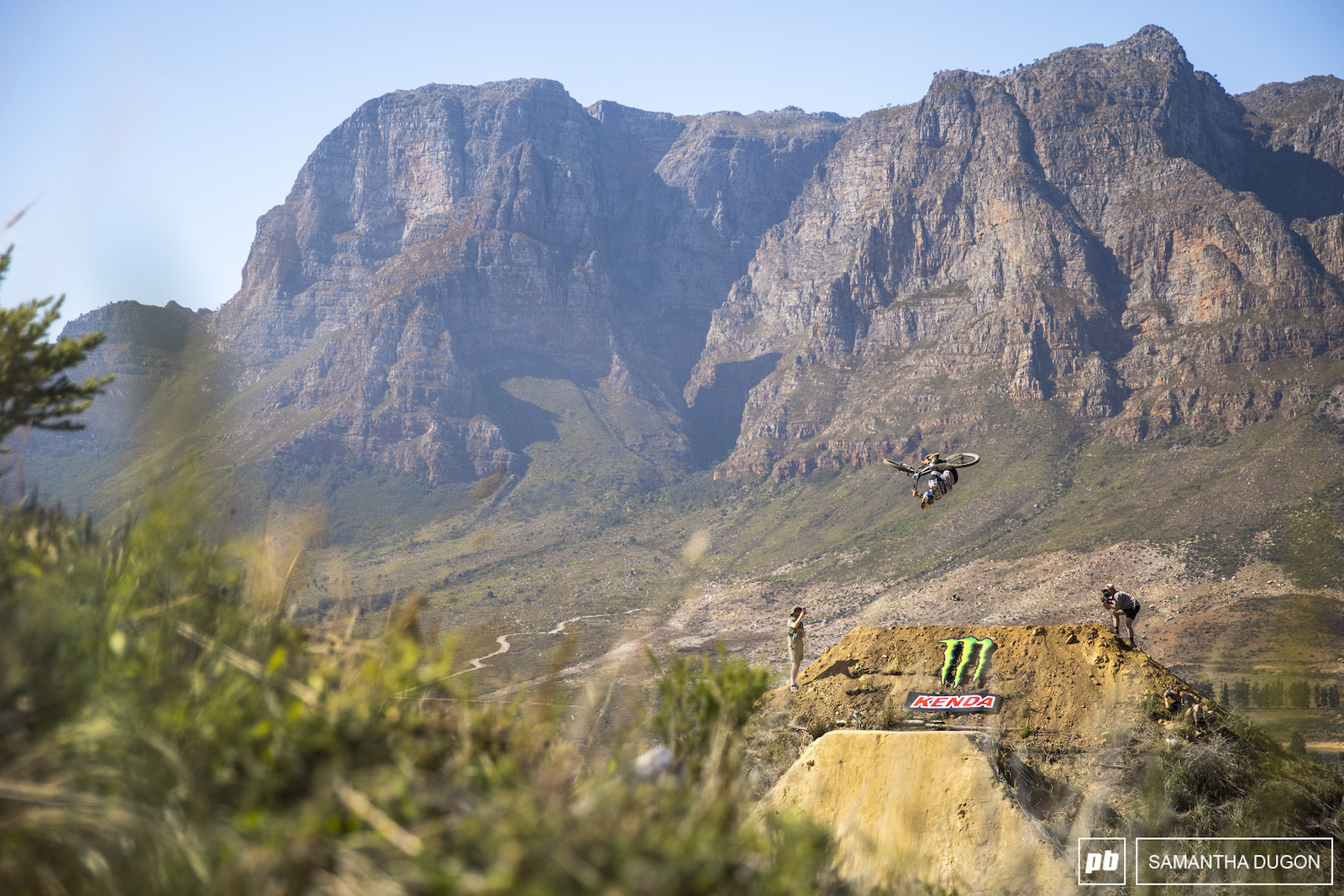 From downhill to freeride, there's not much Kade Edwards can't do 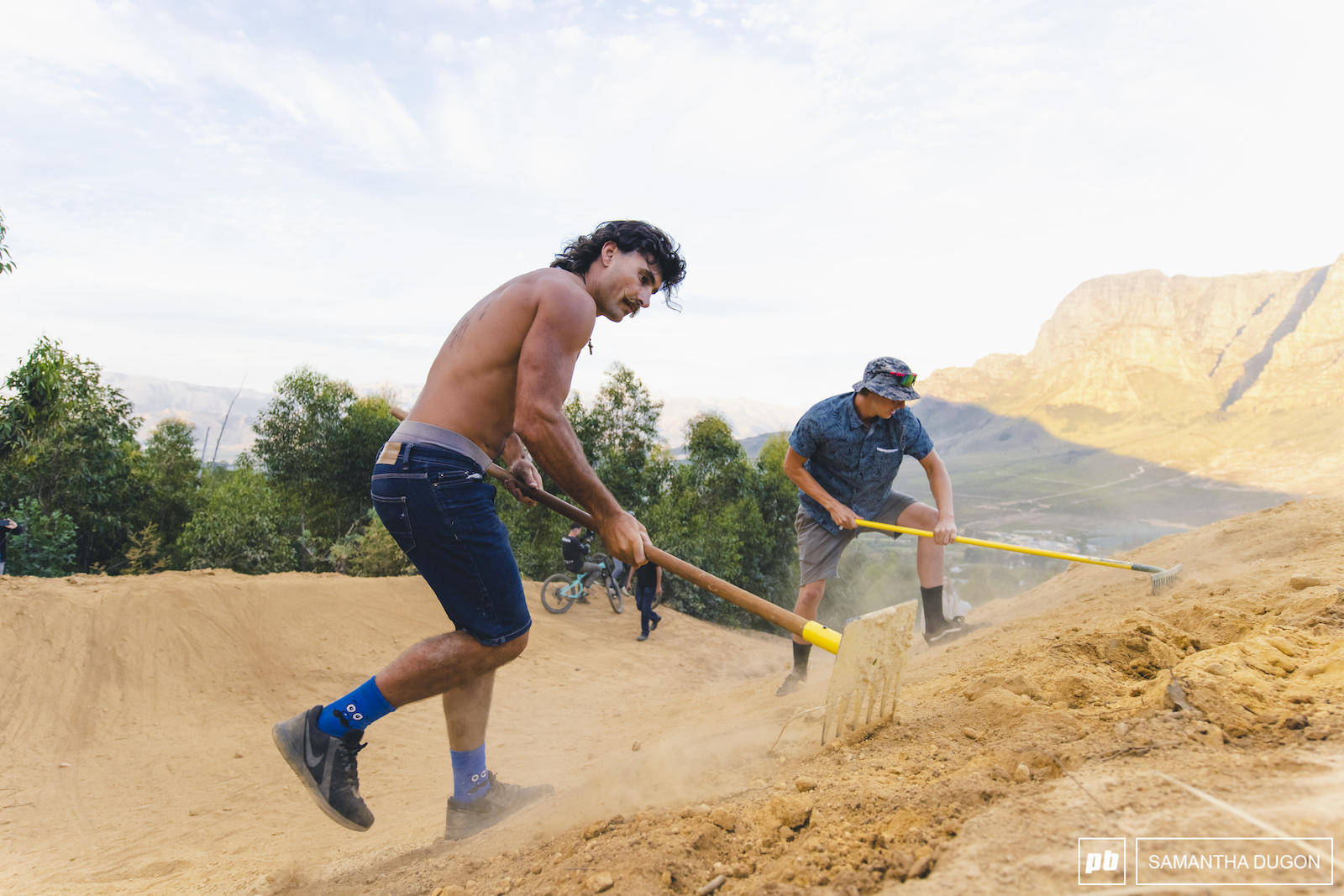 A massive shoutout has to go to everyone involved that helps make Darkfest what it is!

nevertoofast (Apr 20, 2022 at 5:54)
Take that industry standards.... Godziek on some clapped out whatever the f#ck bike, just set up stiff AF with tubes and garbage tires and ripping harder than anyone.

obasch (Apr 20, 2022 at 17:24)
@joshslewis1: Can we get this guy banned, he has been going around to different articles posting dumb stuff like this.

usfrenchie (Apr 20, 2022 at 13:46)
Amazing. Thanks for the coverage PB, and so grateful for the organizers to bring in a rad crew of lady shredders - and for all the guys who encouraged, showed, towed and high fived them.

netposer (Apr 20, 2022 at 6:13)
We need more of shots like this. Puts a new perspective on events like these compared to the video.

spudreau (Apr 20, 2022 at 9:07)
haircut - fun, state of mind... amazing. I will show up on my next zoom call with the bozo cut and see how the c-suite reacts, followed by joining the family at the dinner table. Should be good.

G-Sport (Apr 21, 2022 at 3:58)
Thanks for sneaking all the results into the captions before the video drops very considerate...