Back in February 2020, Singletrack Jamaica invited me to their Fat Tyre Festival. I brought along Miles Mallinson to help document the trip and SCOTT Free Ski athlete Scott Goedkoop who'd started mountain biking in a big way and is a rad content creator!

It differs to most bike festivals that I've been to in that it's limited to a group of about 20 and you spend 8 days travelling the island of Jamaica sampling what I'd say is some of the very best riding the island has to offer. The group had come from all over the world, some from mainland USA, the UK and parts of Europe, for some it was a new experience and for others they'd be joining the Fat Tyre Festival since day 1 which started sometime in the 90's. Singletrack Jamaica's emphasis was on having as much fun on and off the bike as possible, Reggae was bouncing in the bus between shuttle drops and the Red Stripe was flowing after each days riding.

The trip started in Ocho Rios and that was about as touristy as it got! From there we were taken off the beaten track to places I can't imagine many tourists would get the opportunity to visit, it was certainly a cultural trip. 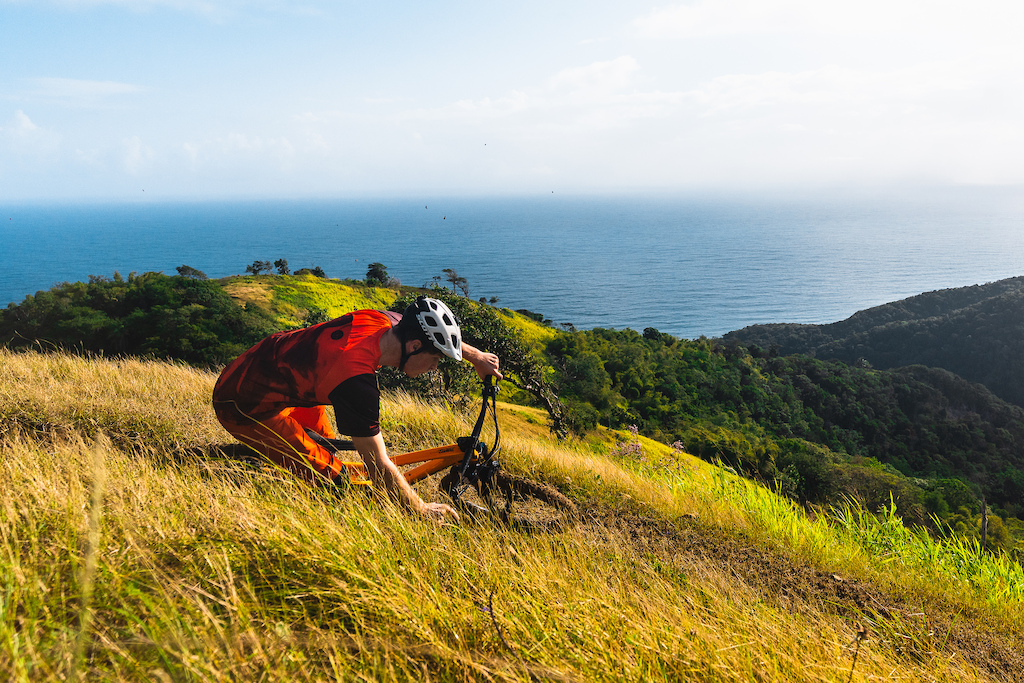 I feel this sums up what I'd imagined Jamaica riding to be like, golden morning light kissing the Caribbean waters, green rolling hills and blue skies. 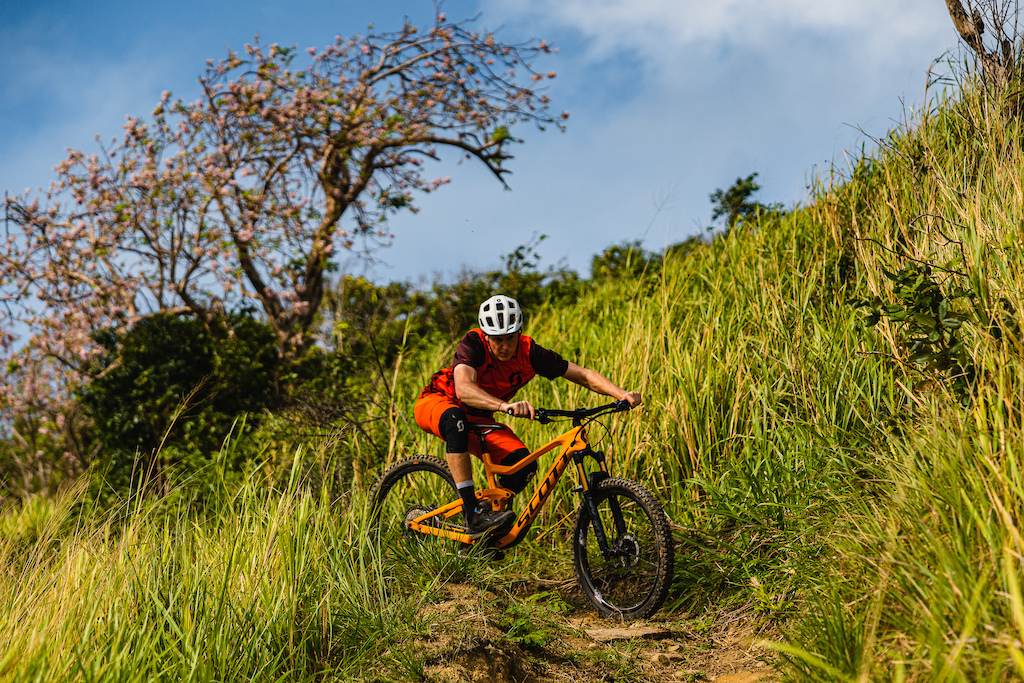 The upper section of Pressure Drop descended through working farmland. It was rutted, steep and banked. In some ways I felt like I was riding down a bobsleigh course. 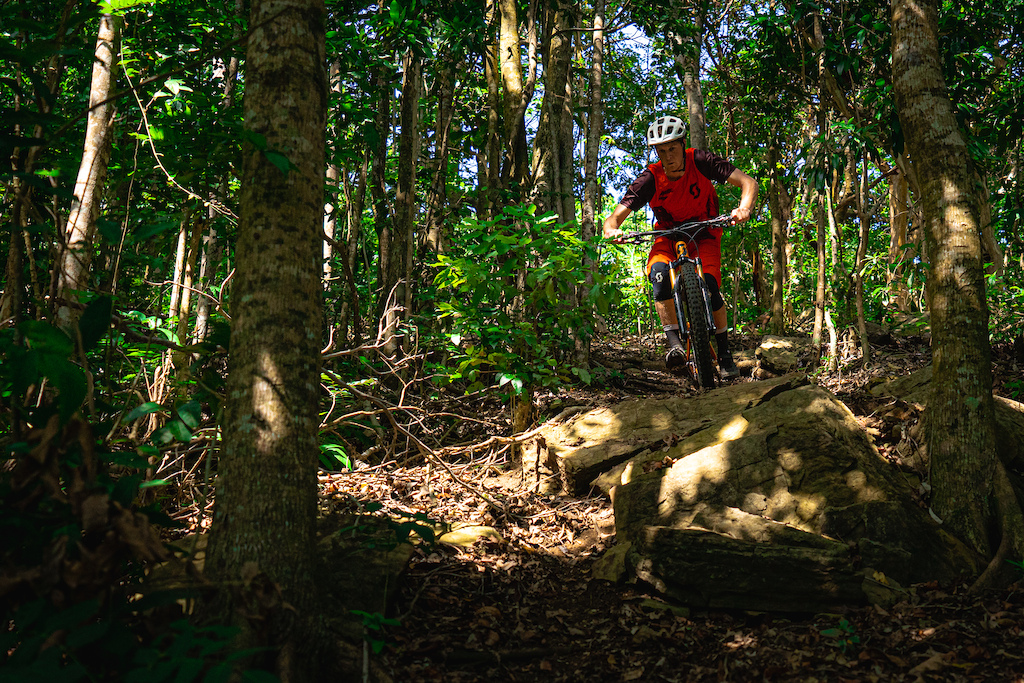 The jungle terrain was incredibly diverse, a mix of malchy sections littered with large rock features making some sections a little more challenging than others. 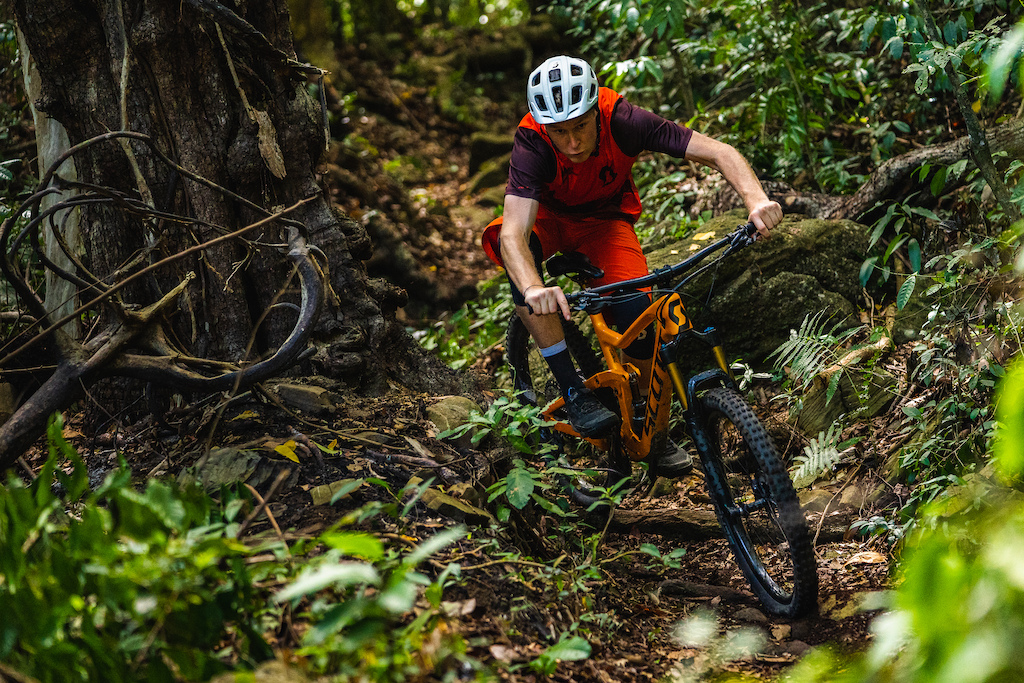 Flowing singletrack through the jungle. 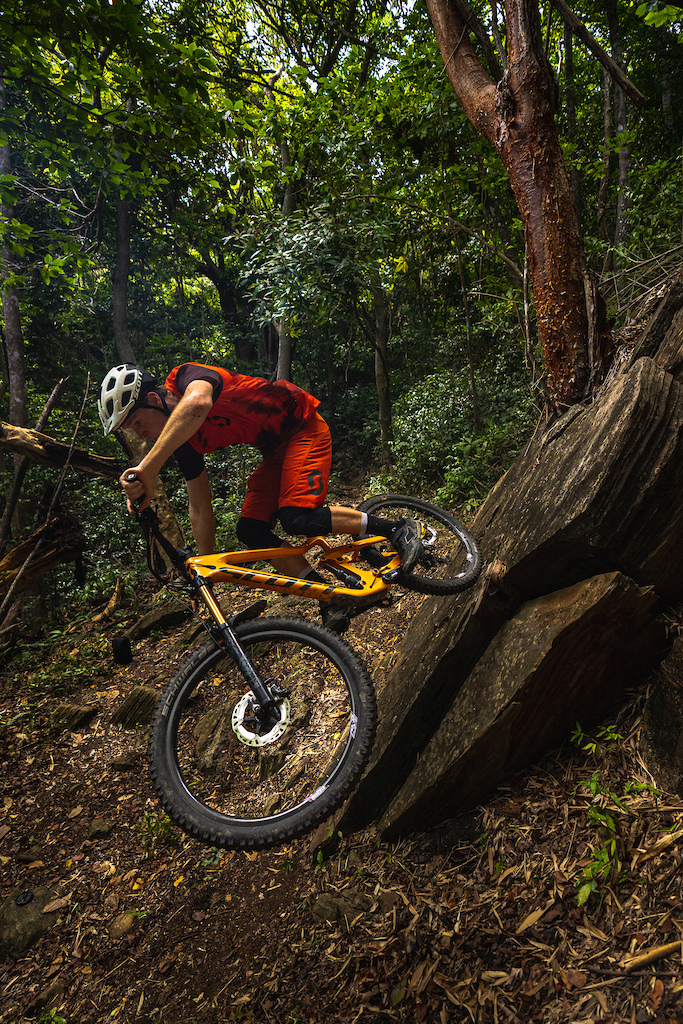 Natural wall ride just off the side of the trail. 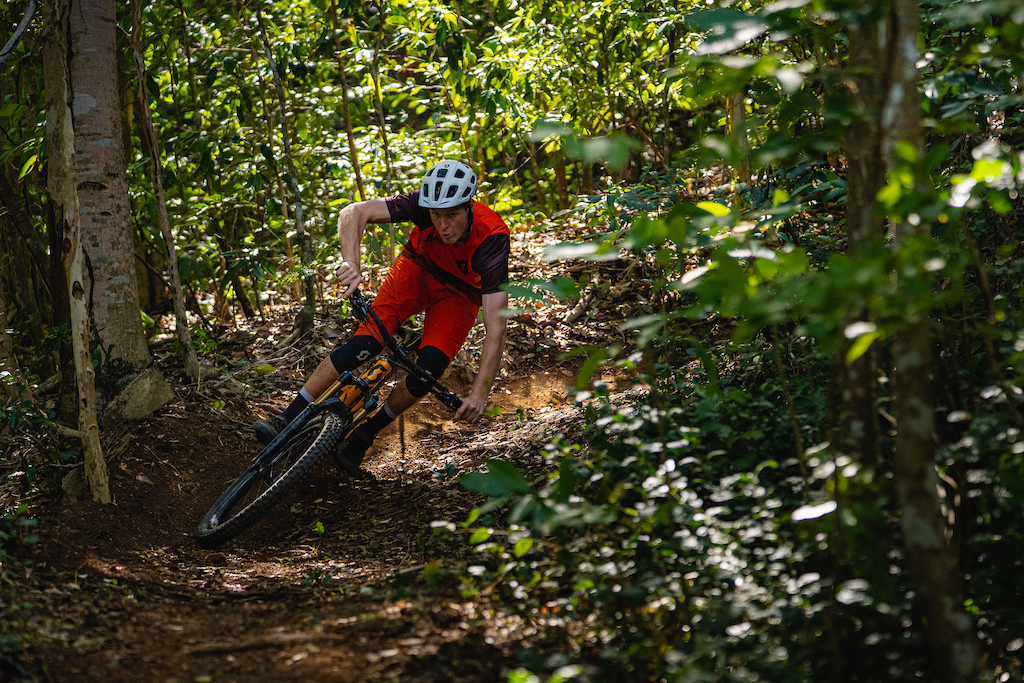 Lower section of Pressure Drop has been rebuilt for the festival with berms through the jungle and it rode awesome. 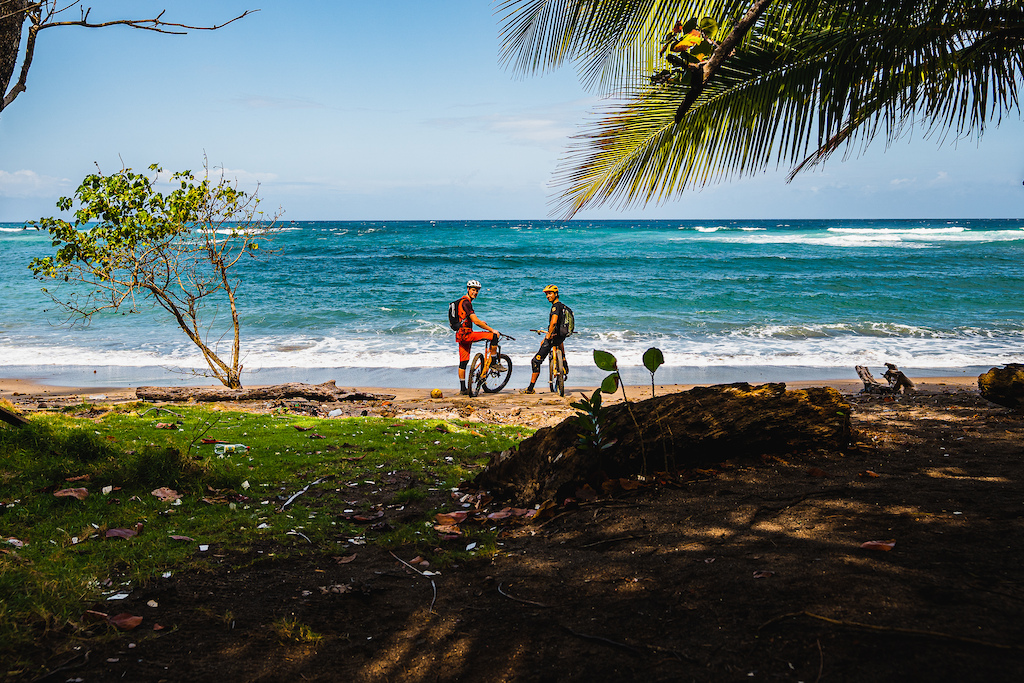 Finishing at the Black Sand Beach, drinking coconuts, eating Chicken Foot soup and chilling on the beach was the best way to kick back after a days riding fun trails. 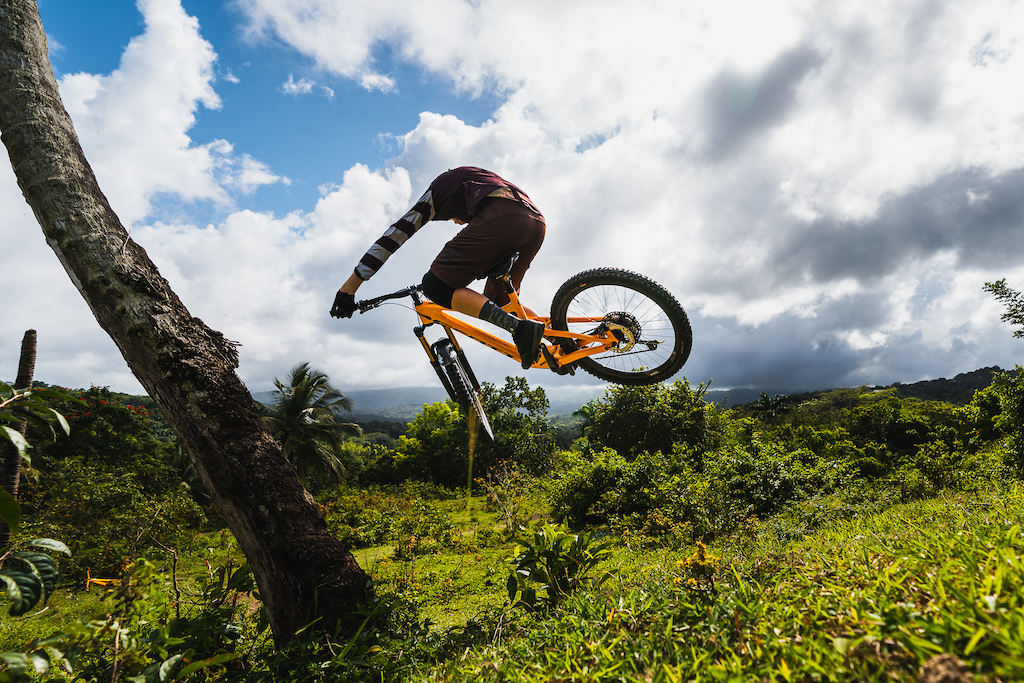 No idea why but this little trail was called Greasy Joes, it was a man made trail with a few little features and some fun step downs. 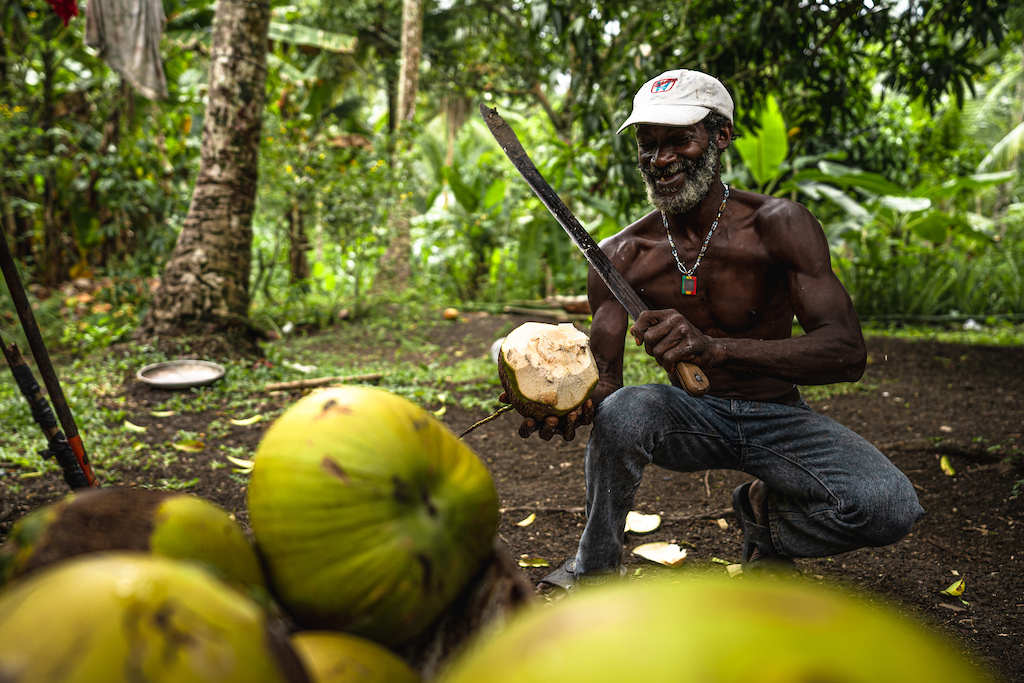 We shuttled and climbed through the jungle and it felt like we were in the middle of no where when all of a sudden we arrived at a hut and were greeted with fresh coconuts. 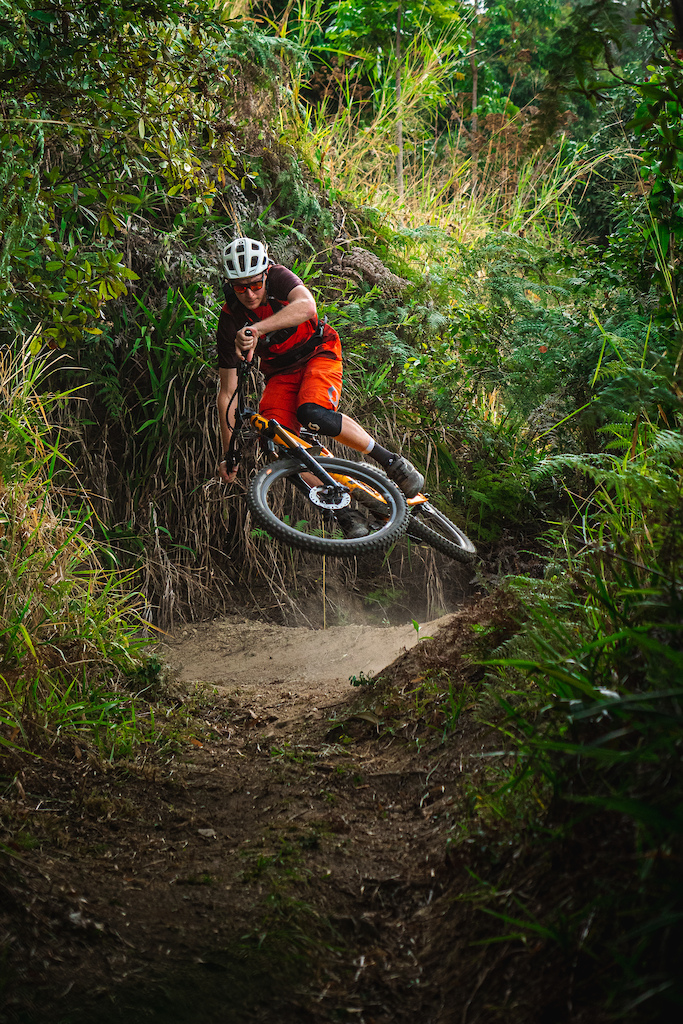 One of the newest additions to the tour was Jus' Kiddin, this was one of my favourite trails on the trip. Local legend, Anthony 'No Brakes' King had build it just before the festival, it was fast, flowy and had all the good stuff to keep you grinning the whole way down. 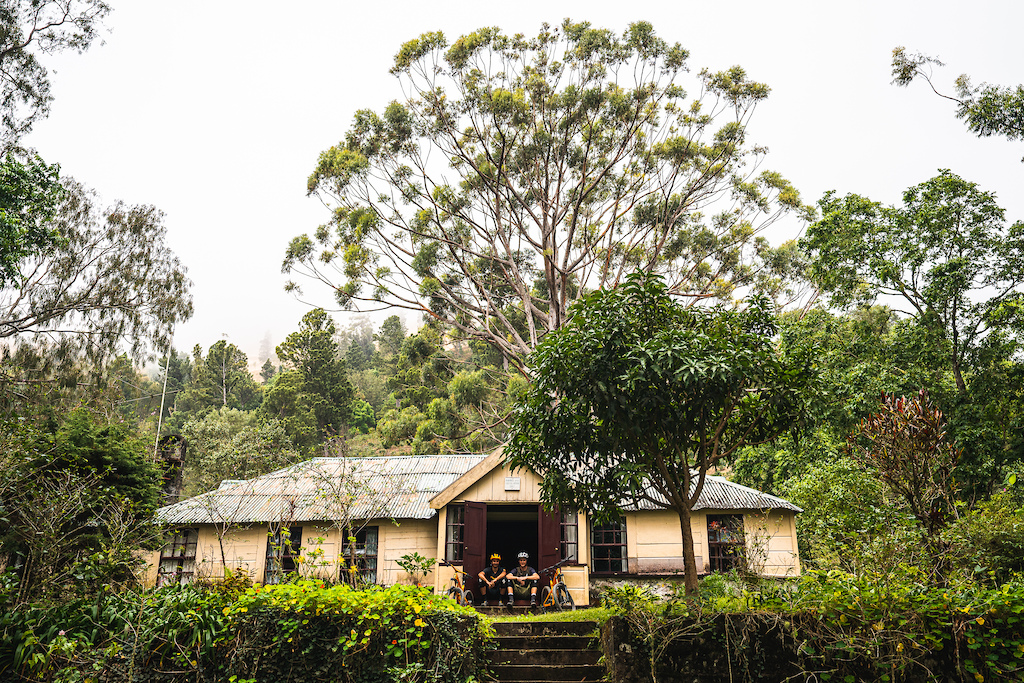 Our refuge for the night before ascending the Blue Mountain Peak was at Whitfield Hall dating back to the 18th century, arriving in the dark after a 1 hour 4 x 4 ride, we couldn't see much. We woke to the views in the morning to discover just how special this location was. 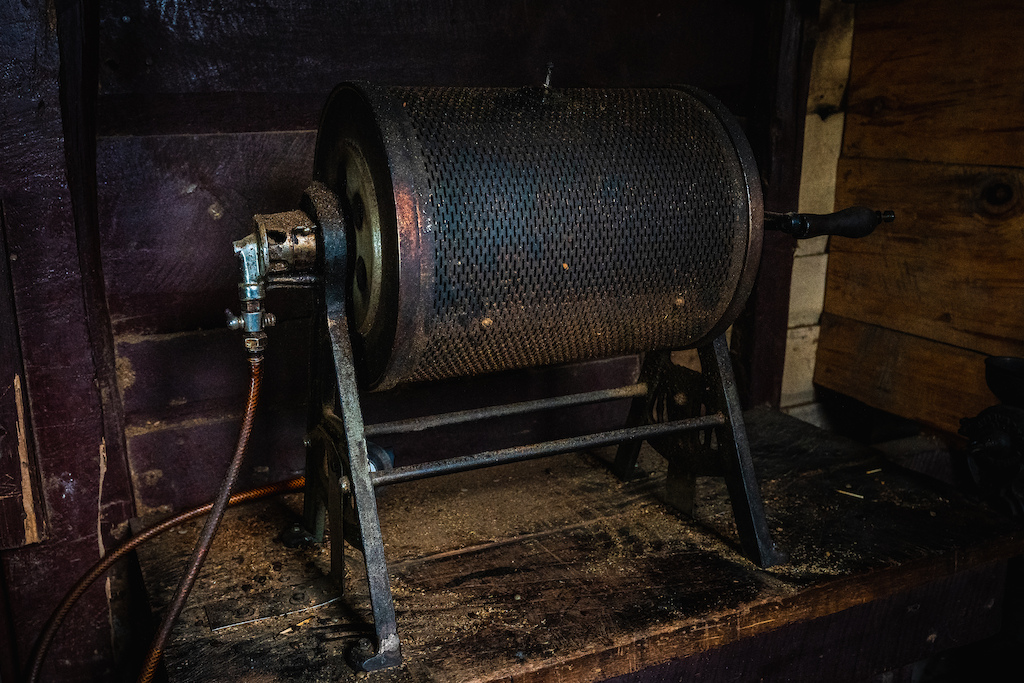 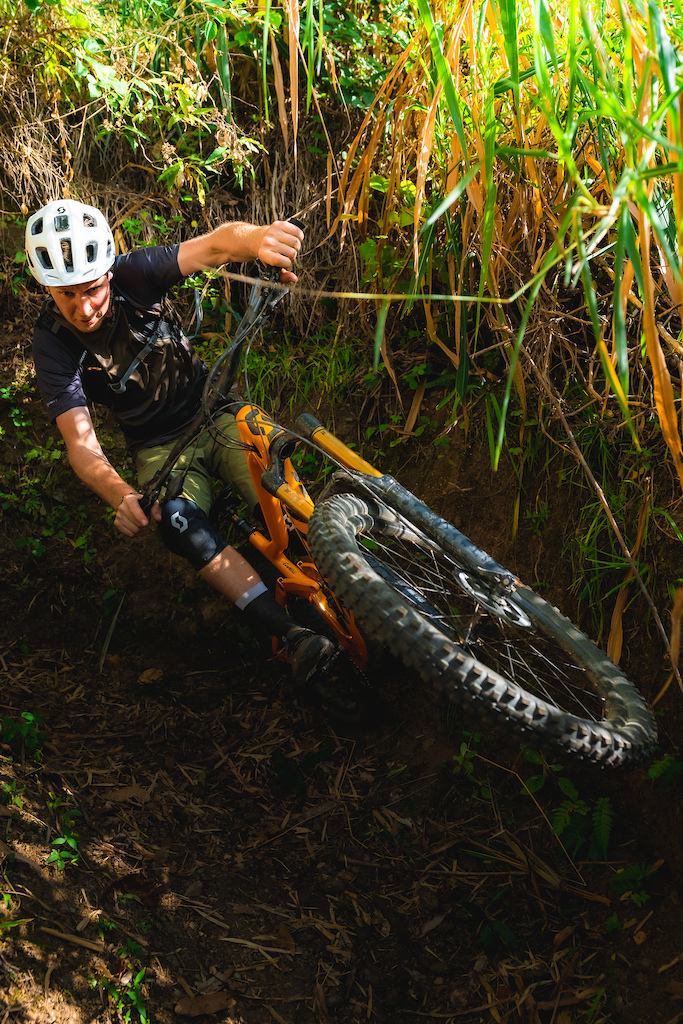 The trail down from the Blue Mountain Peak was a highlight of the trip for me, it was tight, tricky in places but so much fun was had bouncing through the banks. 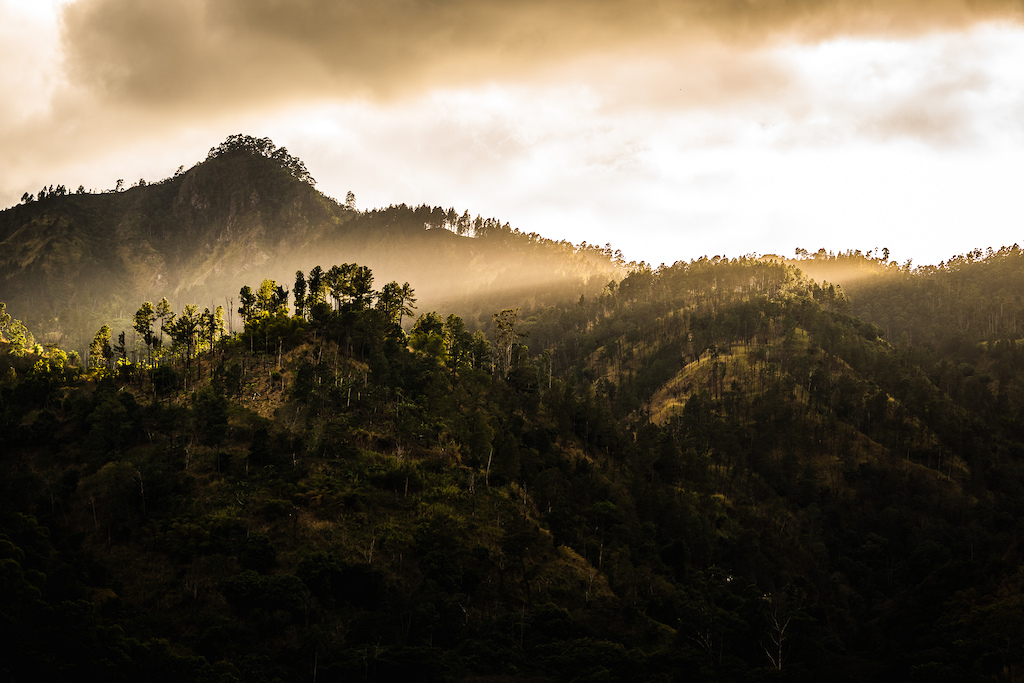 Jamaican sunsets were something to be in awe of, I love the light silhouetting the trees behind. 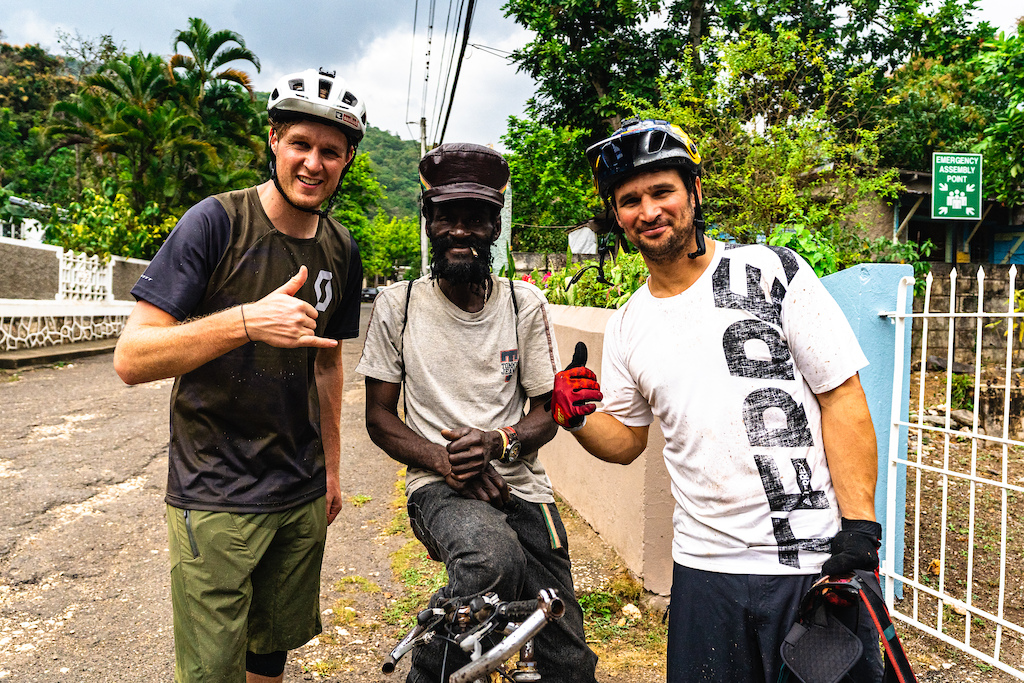 Freeride legend Darren Berrecloth also joined the Fat Tyre Festival in Jamaica, this was the first time I'd met Darren, growing up watching NWD Films, I was star-struck but like most pro's I've met he's a chilled dude who just likes to shred. 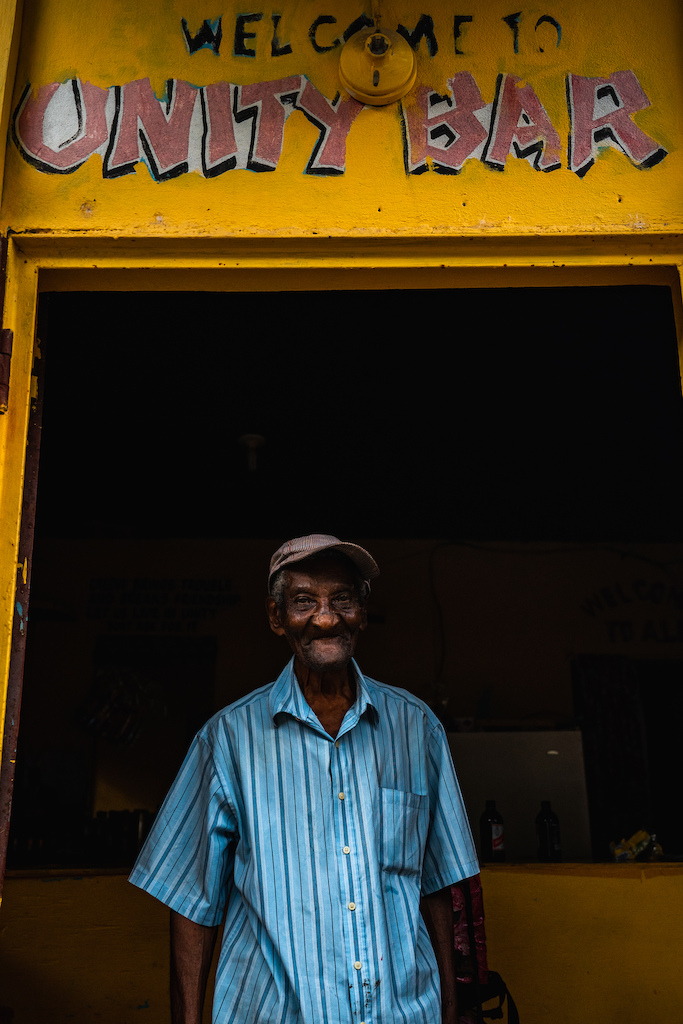 The Unity Bar in the Dallas Community was the final stopping point of the trip, a toast to the trails ridden was made. This fella was the bar man and handed out Red Stripes to the thirsty group who'd emerged from the riding through dense jungle forest. 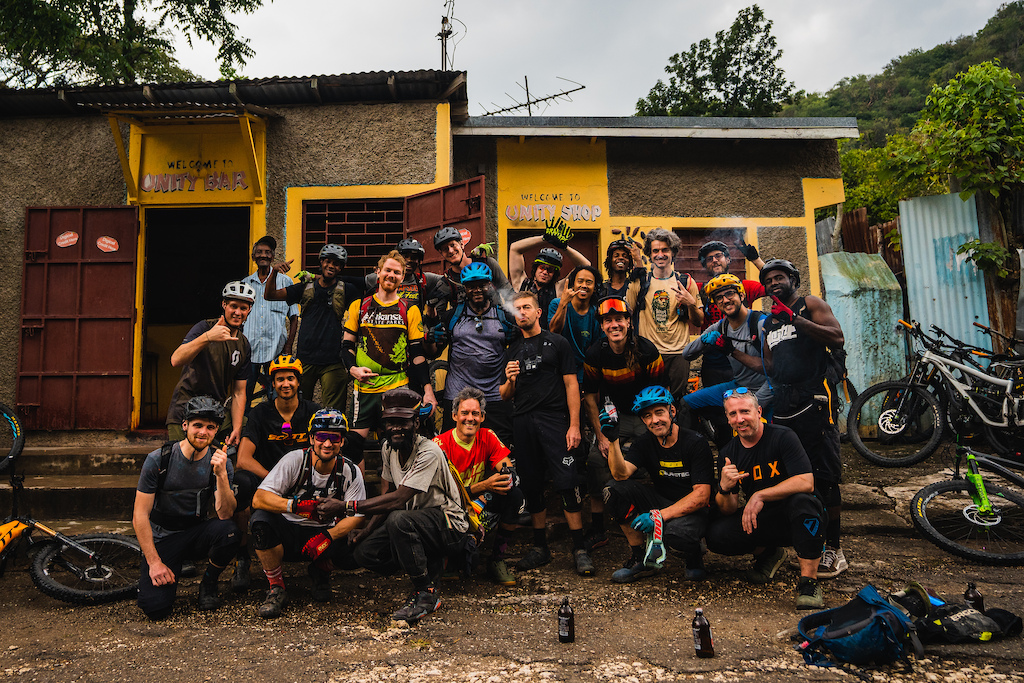 The group photo, cheers to everyone here, this was a trip to remember and the last before Covid-19 lockdowns and travel restrictions were enforced. 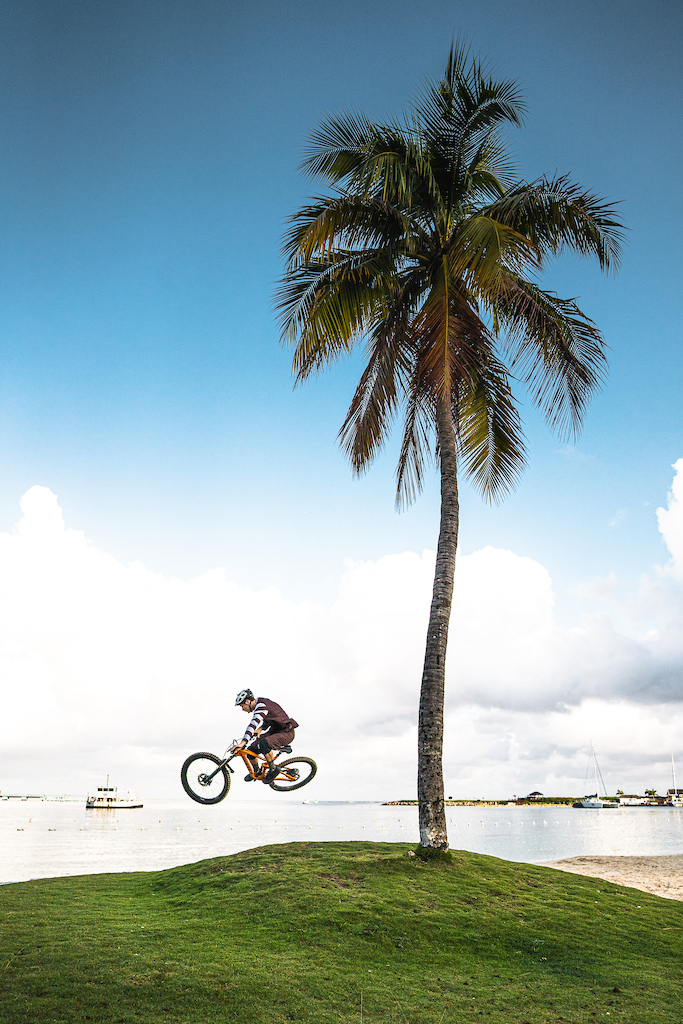 It's safe to say that Jamaica had some really diverse terrain, from the peak of the Blue Mountains to the hand cut trails through the jungle, there was a style of riding for everyone to love and Andy and his crew went out there way to make sure everyone was having a great time! Here's hoping we can travel again in 2021...

Thanks to Andy and Jonathan at Single Track Jamaica and Visit Jamaica for supporting this trip.

Adamrideshisbike (Jan 7, 2021 at 5:13)
I believe it was John Candy that dug that upper section to allow his Jamaican bobsled team to practice for the Calgary Olympics.

valleytroll (Jan 8, 2021 at 4:58)
Might come as a surprise but most mountainous locations are pretty good for mountain biking. Particularly when paired with a favourable climate. Fat Tyre Festival in Jamaica started way back in mid-90's!

singletrackjamaica (Jan 8, 2021 at 4:59)
Great edit and photos Scotty, Miles and Scott, nuff respect! For obvious reasons we’ve decided to postpone the 2022 Jamaica Fat Tyre Festival ( which usually takes place in February). Hopefully the travel situation will improve later in the year. We also do other tours year round so link us up if interested.

madmon (Jan 7, 2021 at 18:27)
it is the perfect name if you ride it. This trail is centuries old and made better with the big build that starts further up top by Singletrack Jamaica. Big boy pants only.
Here in Hyland's daily report from 2009 is Preassure Drop at 1:58
www.pinkbike.com/video/122902

JayTucc (Jan 8, 2021 at 5:54)
I had the chance to spend two days with the Single Track Jamaica guys and it was some of the coolest riding I've ever done.
This should a bucket list ride for everyone.