Jan 30, 2016 at 14:59
by Sebastian Sternemann
Tweet
Today was the third stop of the 2016 DownMall Series. Established 6 years ago with no more than three stops, the series is now growing with races scheduled in Hannover, Berlin, Frankfurt, Budapest, and Bratislava, with the final set to take place in Prague at the end of the European winter.

At the first stop, Johannes Fischbach took the win against Tomas Slavik. Then at the second stop in Berlin, Fischbach made a mistake and was not able to jump a drop, and Slavik was able to take the win. So in today in Frankfurt things were getting exciting with crowds wondering who would take the lead in the overall.


For the first time, DownMall took place in the My Zeil mall, one of the most modern shopping malls in Europe that features a unique view of Frankfurt's skyline. 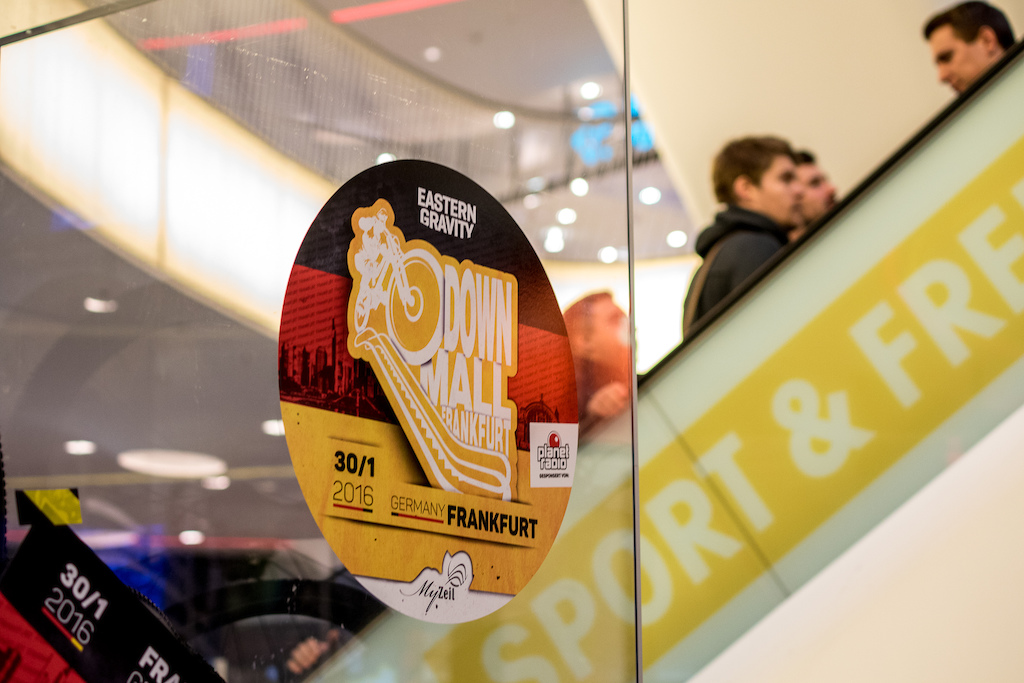 First time in Frankfurt in the My Zeil mall which has the longest free hanging escalator in Europe. 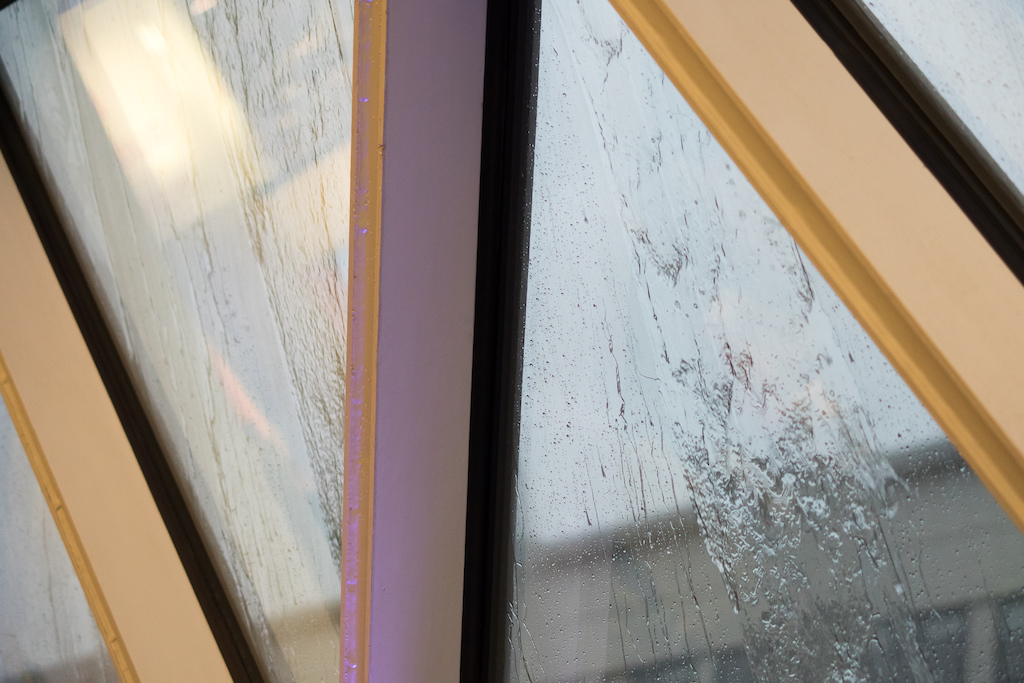 It was raining hard outside so it was at good day to stay inside.
The weather outside was rainy and windy, so it was a good day to have an exciting race in a mall, even if the roof had problems keeping the water out... Where regular customers were making normal purchases, 30 riders raced against each other on the slippery, tiled floor.

The bikes are very varied. Most use 4X hardtails, others ride small fully's. The tires are mostly street tires and to get more grip some riders use glue or wax.


This track was the longest one in the history of the DownMall. UK urban downhill rider Ben Moore shows us the track in his helmet Cam video.

The track goes straight out of a ramp into the biggest double of the track, then over some small obstacles followed by a long sprint section down to the finish area on the ground floor.

At the beginning of practice, many riders tried to find the right speed for the first jump. Some overshoot and some land at little bit too short.

The race starts with a qualification run which shows that it will be a tough fight between Tomas Slavik and Johannes Fischbach. After the qualification, the last ten riders are cut.


During the second qualification run another 10 riders were cut. It was still a hard fight between Slavik and Fischi, but Fischi took the victory by two-tenths of a second.

During the finale things get exciting but Fischbach wins with a time of 51.03 seconds. Slavik is 00.1.14 back.

iammarkstewart (Feb 2, 2016 at 7:35)
@BrightBulbPhoto...no...if you watch again (and I did, trying to like it), you'll see why I'd put a fiver down betting that Claudio wanted not much part of this. I suspect he'd sound like the Italian Gordon Ramsay after a bad meal.

kjl845 (Jan 31, 2016 at 5:51)
My thoughts exactly. It would never take place at a US mall, liability and lawsuits galore. Some jackass walking by on their cell phone would get run over.

WAKIdesigns (Jan 31, 2016 at 8:50)
Each human being off the face of the planet is good news for all of it's inhabitants, particularly the kind that hits the mall on Black Friday. They should give 70" Plasma free of charge if you sterilize yourself or kill your spouse

go to church... god is your friend... his friendship is free of charge... jesus died for us... now everythings fine again... as you can see... and the best about it: its super simple and its fkn real

SlodownU (Jan 31, 2016 at 10:14)
The reality is that there is zero interest for something like this in the US. You can get in your car, go to Rays and ride a real indoor track, or drive south for a 3-4 day weekend and actually ride outside. The last thing anyone wants to do is ride their bike in the fuckin mall.

fattyheadshok (Jan 31, 2016 at 6:10)
Looks like fun. Good publicity for our sport. Most average folks don't even know that it's possible to ride a bike down stairs. Not the most technically difficult course. But what the hell, its a shopping mall. Like I said great exposure of our sport to the average person. Guaranteed there's more than one kid watching it that's going to get hooked on biking.

Tnp128 (Jan 31, 2016 at 8:36)
When I was a kid my friends and I bombed our bmx bikes down the escalator and got chased by mall security. Was so fun but to actually have a race would be the coolest.

Mattin (Jan 31, 2016 at 8:04)
I would be afraid to clip my bars on those narrow sections, sending me over the rail down a couple of floors. Looks like a fun thing to ride though, just personally wouldn't wanna race there with 800mm bars

I really like these type of events because it reaches the public very well and many new people get introduced and stoked about our sport. So keep up the good work guys!

GlassGuy (Jan 31, 2016 at 9:01)
Not as narrow as fish eye lenses make things look...I have yet to understand why "fish eye' is the lense of choice on helmet cams--distorts everything

vinay (Feb 1, 2016 at 2:29)
Not sure whether they have different types of them, but the ones I've ridden aren't particularly difficult. They may look intimidating and that is what keeps you on your toes, but escalators are grippy, regular and with a nice transition at the top and bottom. They aren't particularly steep and you get this nice noise as the steps rock a bit when you roll over them. Have got to admit I was never really in that much of a hurry, rode against the escalator direction (so that it feels smoother) and my bars probably weren't much wider than 650mm or so. So yeah, if you're hauling down one of these on a modern bike at race pace it is sure going to be scary.

Joshtp (Jan 31, 2016 at 5:24)
Anyone remember ice 4x back in the day..? Sometimes stuff seems cooler than it actually is, at the time. Still.. Good publicity for the sport I guess.

sherbet Plus (Jan 31, 2016 at 9:38)
Did nobody consider putting berms on the course? Destroyed any chance of the riders having speed.

Parabellum (Feb 1, 2016 at 7:15)
And there we go bringing berms into it again. I am so sick and tired of everyone who keeps trying to dumb down our shopping malls by getting rid of the flat, shiny floors. What's next, smoothing out the escalators? If you aren't good enough to ride in a mall you should start someone else - like maybe a government building or a hospital - and practice until you build the proper skill sets. Keep the gnar where it belongs, in our shopping malls!!

x-rider (Jan 31, 2016 at 11:50)
the format of the event may be questionable but the pictures seem to be spot on.
Nice coverage from the event. good to see events which bring bike action closer to the mass, even if it does not beat Texaco ; )

WannabeMTBer (Feb 1, 2016 at 21:16)
I found that fun to watch. If I knew this was happening locally, I'd go watch it in person... ok maybe not, I hate malls. Most times bikers are showing skill and giving positive exposure to the sport, I consider that a good thing.

johnnyprank (Jan 31, 2016 at 5:17)
Tomas Slavik 2nd,Jakub Riha 3rd,perfect! Congratulations! I'm proud that I am from the Czech Republic

OliverSwinnock (Jan 31, 2016 at 15:25)
It'd be cool to see them ride down escalators moving upwards or downwards

SteveDekker (Jan 31, 2016 at 7:36)
Meh Its winter gotta ride somewhere. Was diggin on the Orange Crush in the demo ride!

they dont wanna cry while riding

not as boring as you think