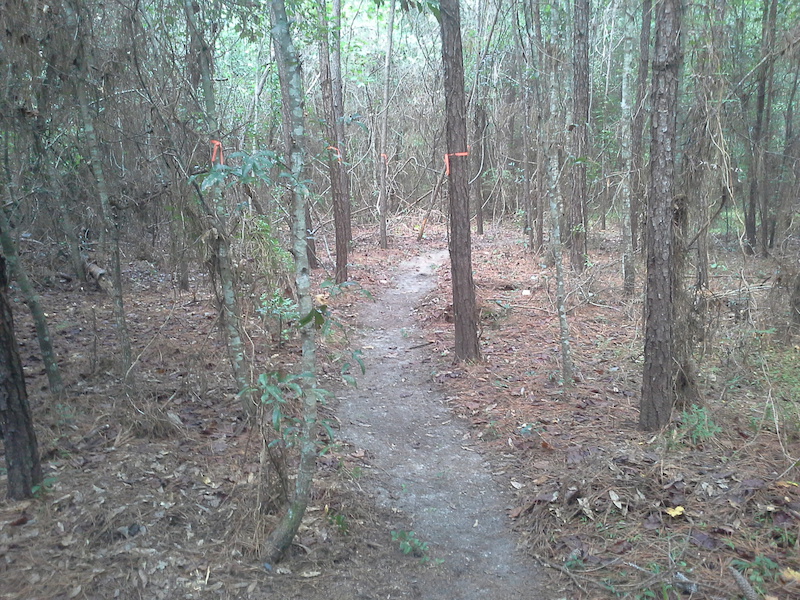 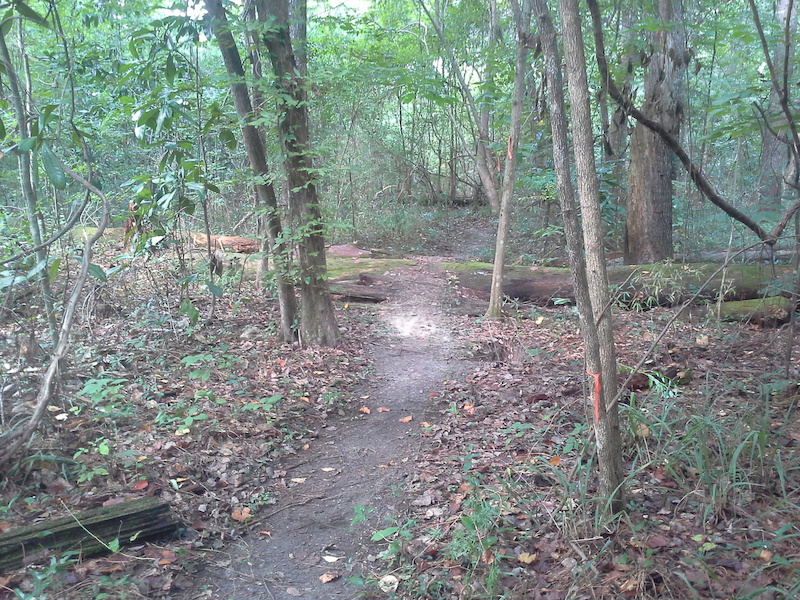 We have been eyeing up Northside Park as a potential location for some mountain bike trails for some time now. I talked with Mr Chastain of Chastains Bicycle Co. , and he informed me that the city had plans to put trails in there. He and his son had started to build a trail there some years ago, but never finished it and it eventually became overgrown. I asked him if the city would have any problem with me and my crew going in there to build trails. He said "NO" . He also told me that when the trails are completed, the city was going to have a ribbon cutting event to mark the official opening of the trails. So, it was at this point that we ( Black Diamond Biking ) became "official" trail builders !! Our first section of trail was basically a "trial" run, consisting of a few hundred yards that ran from the trailhead to the bottom of the hill. It was fairly easy to construct, we chose a path that was fairly open and only required about 10 hours of labor to rough in. This section of trail was actually built before we recieved the "official" go ahead, so we had no idea that we would be building an entire trail system. We decided to use this trail as the beginning of the first loop. 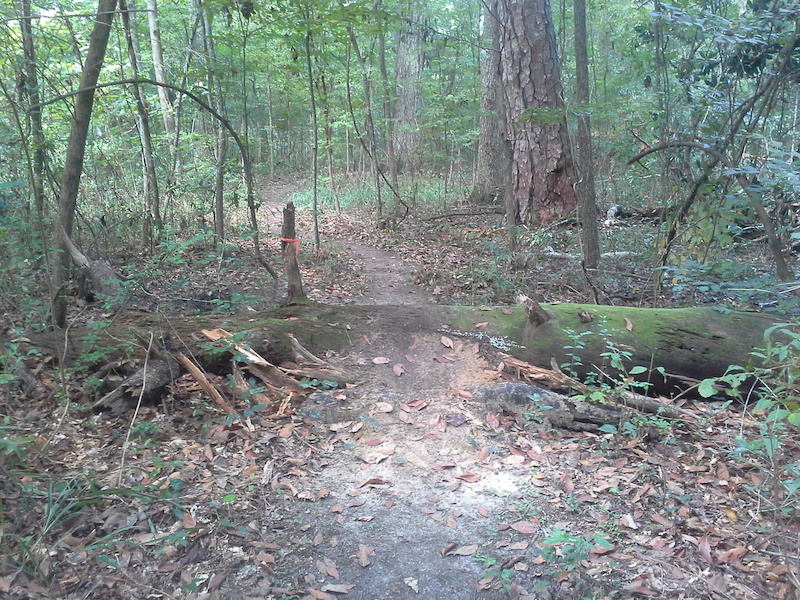 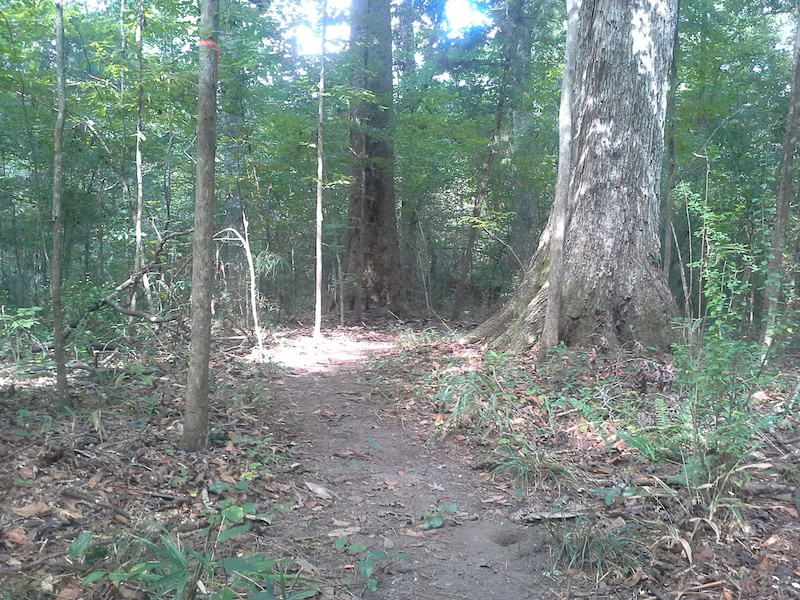 It took 4 days to mark out and rough cut the rest of trail #1. We have very limited property to work with , so, I tried to lay out the trail in such a way that it used as much of the woods as possible, included natural features ( fallen trees to be ridden over or to be used as a log ride skinny ), and interesting things to look at (old rotted stumps or massive standing trees ).As Alex and I began the work of clearing the rest of trail#1, we began to realize the enormity of our task. We also realized that, if we were to get this done in a timely fashion, we were going to need extra help. Ryan began telling fellow riders at his place of work, what we were doing. They were excited about the prospect of having trails to ride here in town, so , they readily volunteered to come and help whenever possible. At the same time , I decided to post an ad in the "bikes" section of the Tallahassee Craigslist. Four people responded to the ad, three from the Thomasville area, and one who was a member of the TMBA. With a small pool of volunteers to contact, we decided to schedule a group workday for October 12th. I figured that , if we had around 10 of us working, we could finish trail#1 to the point that we could start riding it. As it turned out, seven people showed up to work; Me , Alex , Cody and Ryan, and three from the Toyota garage , Ashley Bishop , KyleJune , and Bo Bryant. This was a nice turnout for our first group workday. We started working at 9:30 on the end of the trail, working back toward the midway point that was already cleared. 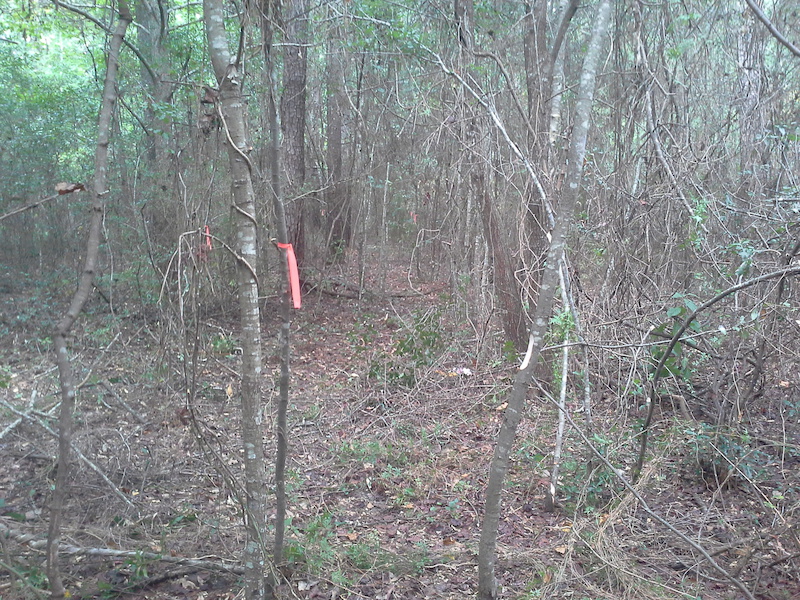 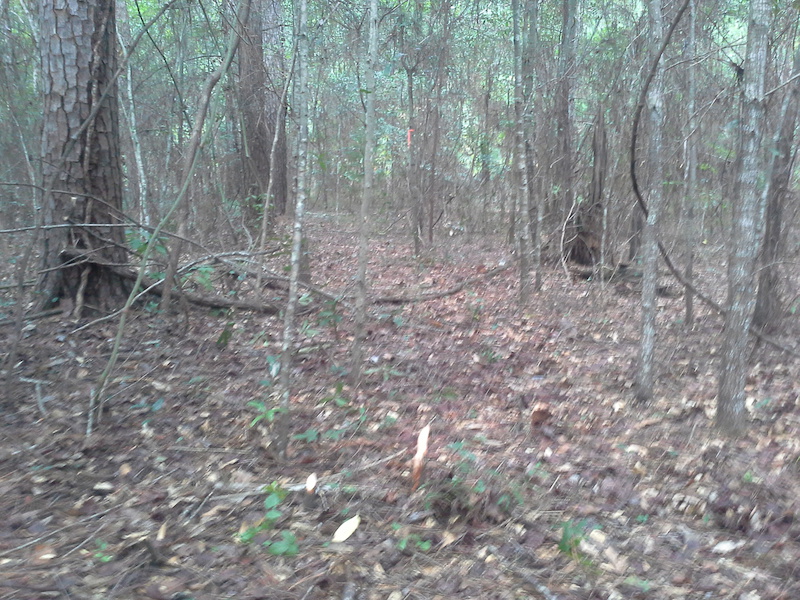 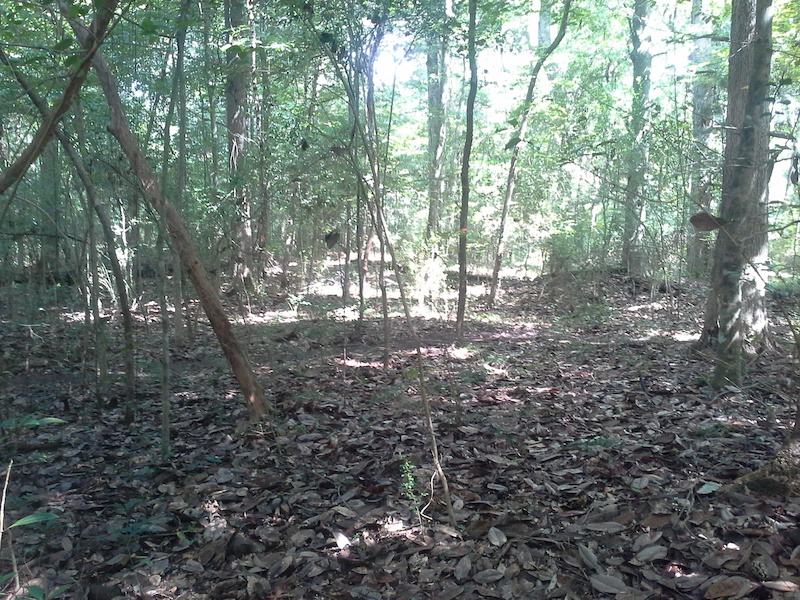 By 3:30 in the afternoon, this small group of hard working guys had done what I did not think was possible. We had completed the clearing of the first loop. Our first trail was now rideable!! 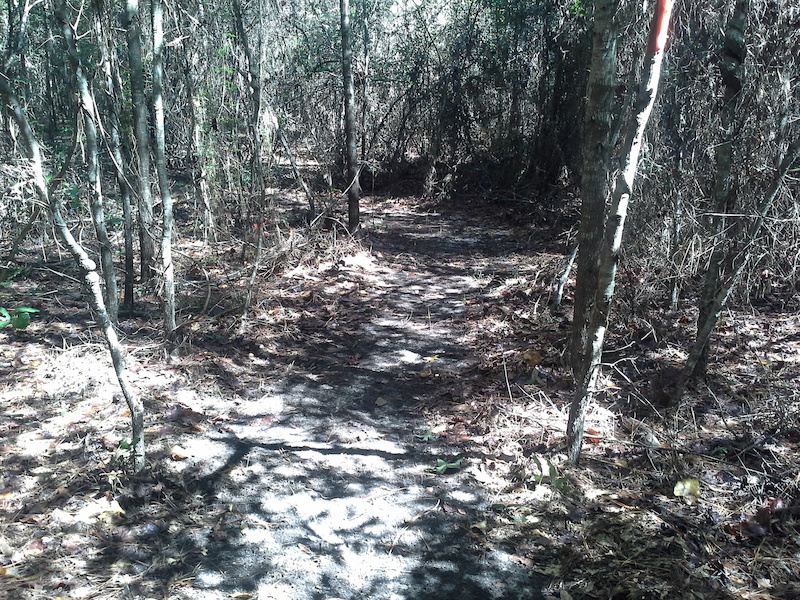 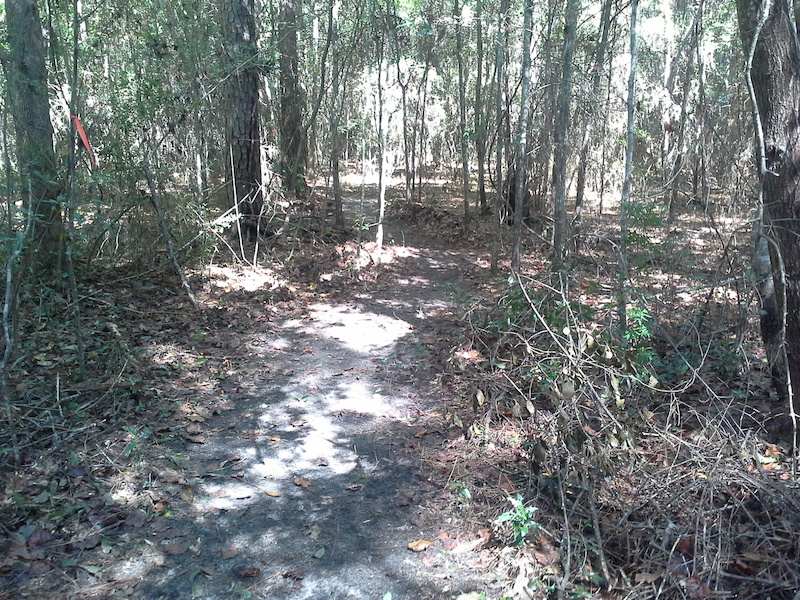 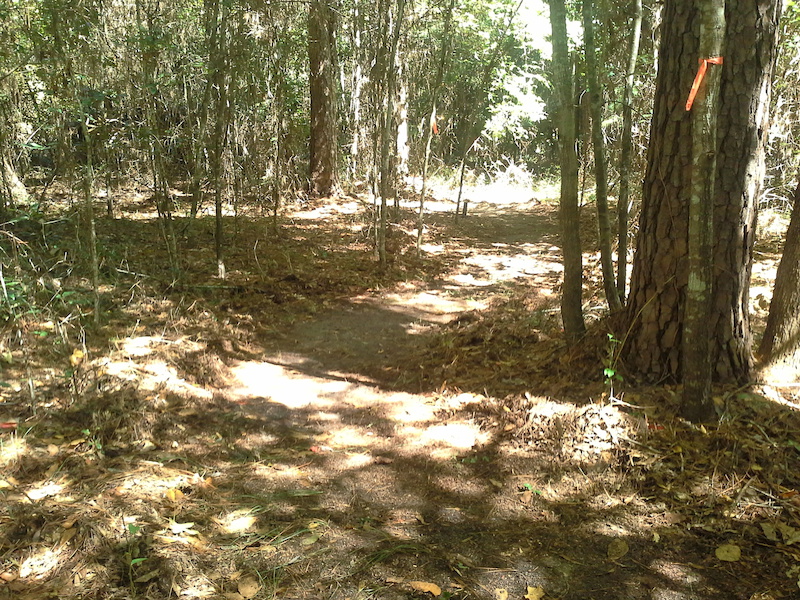 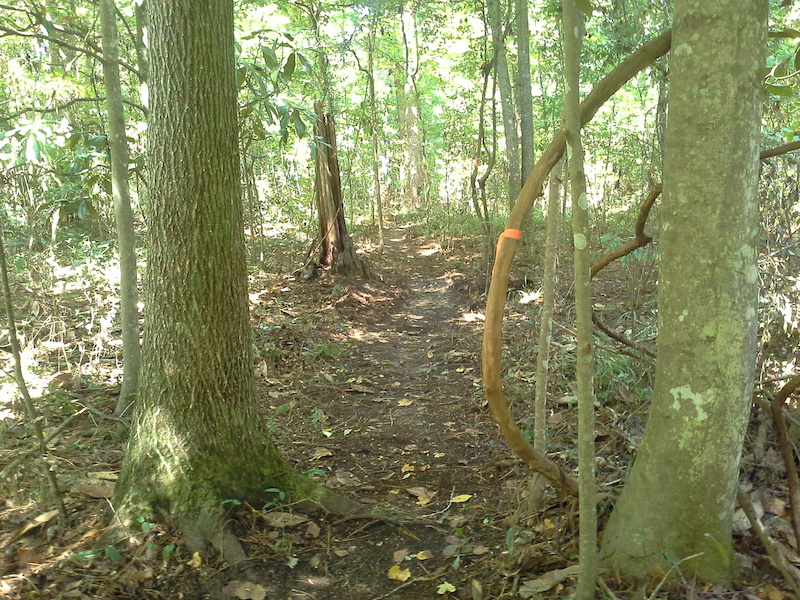 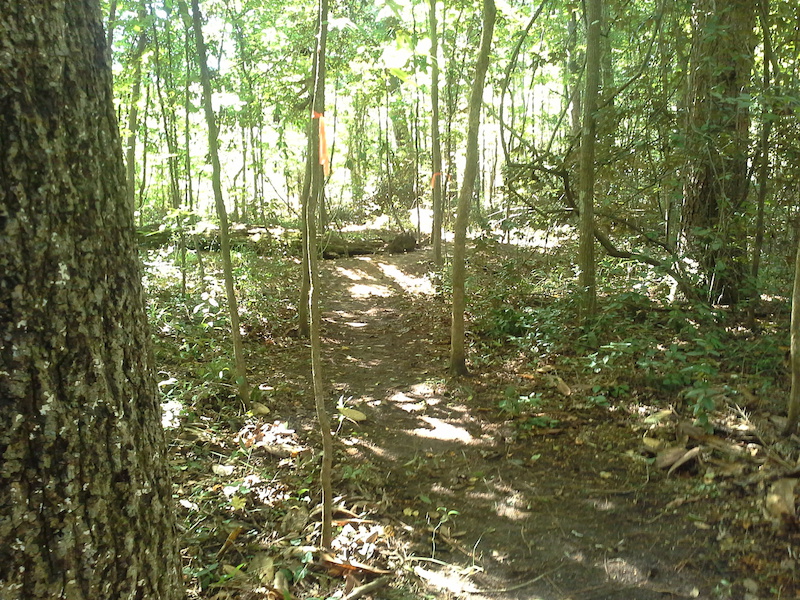 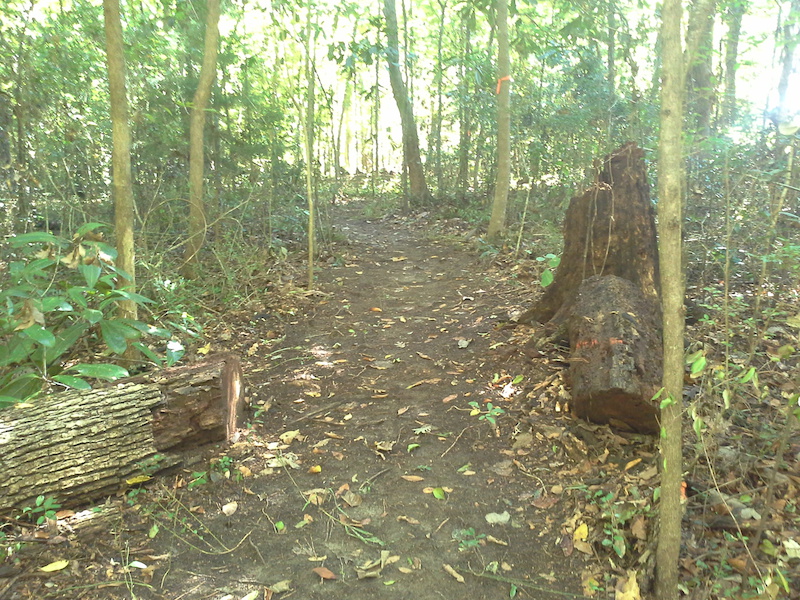 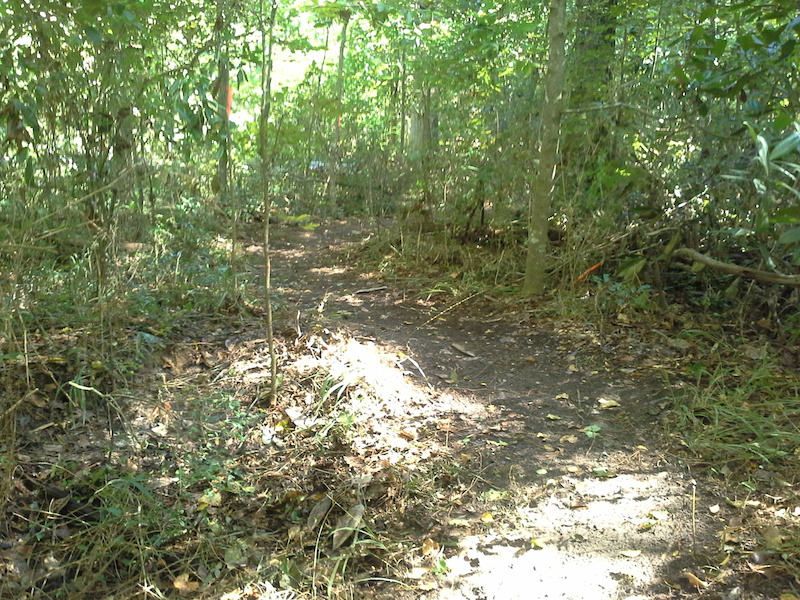 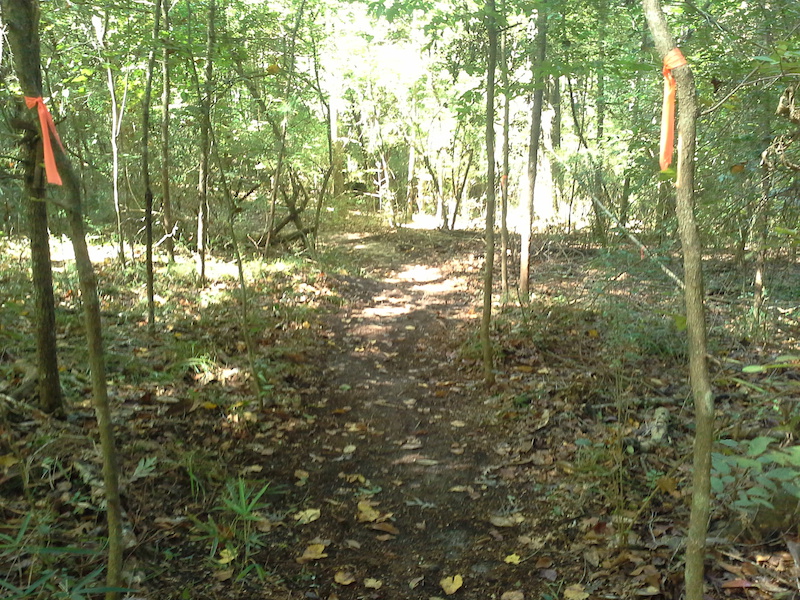 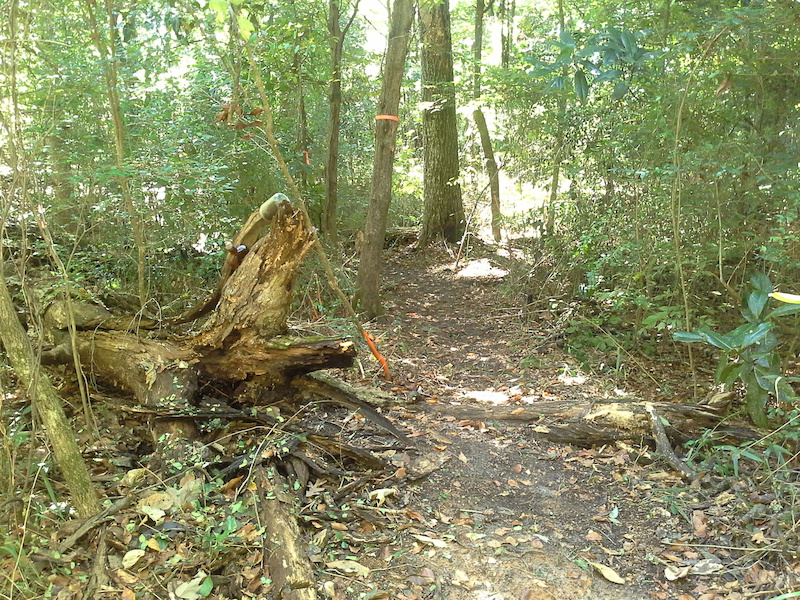 Just outside the crater. 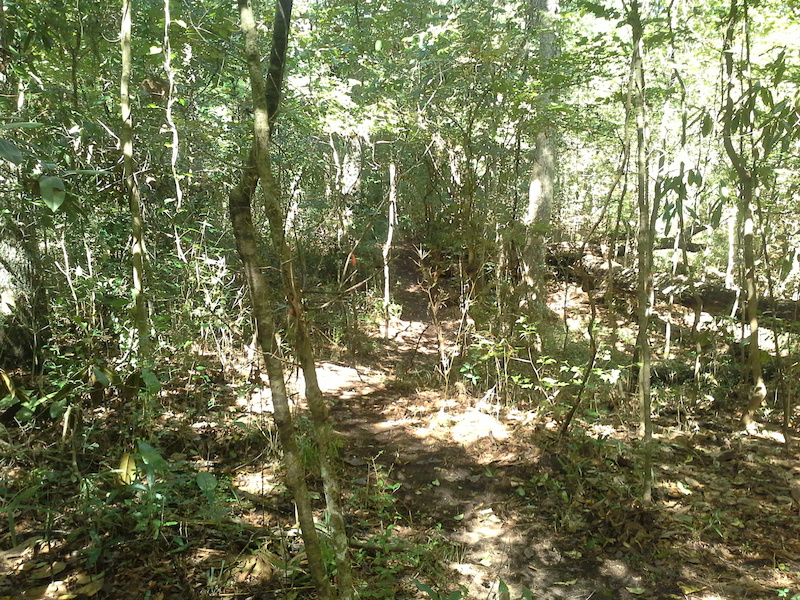 This is where the trail work ended for the day, just above the crater.At this location there will be 2 alternate lines, a small drop line just to the right of the main trail , and a log ride skinny to the far right.The following photo is a GPS rendering of Trail #1 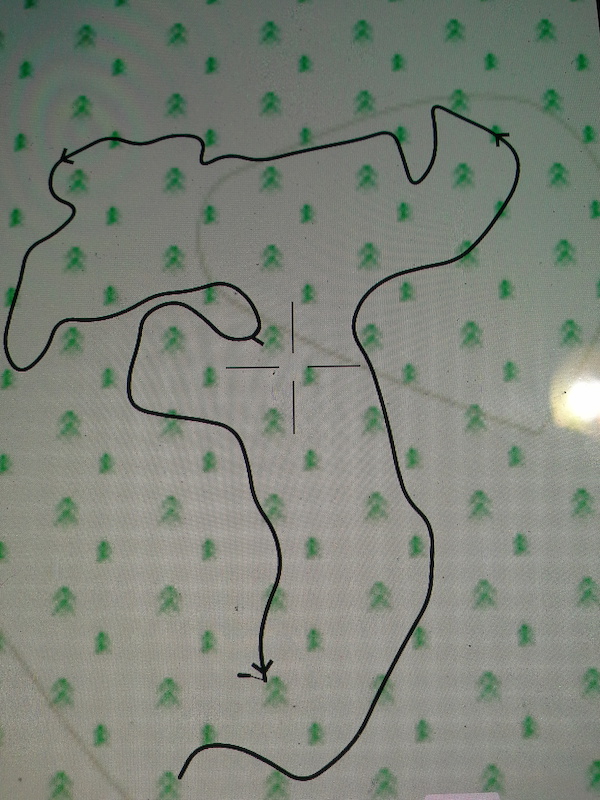 Here are some photos from the rest of Trail #1. Many of the alternate features and berms were completed in the days following the group workday , as we continued to tweak and refine our first trail. 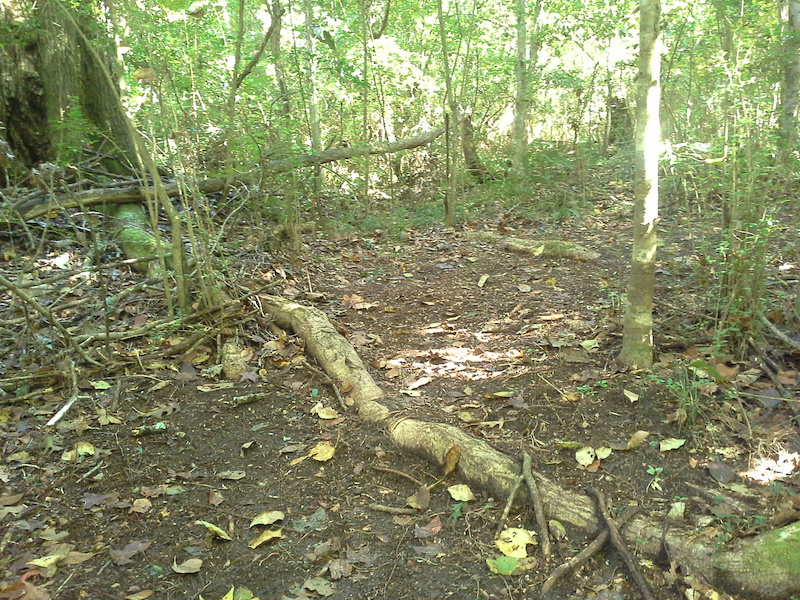 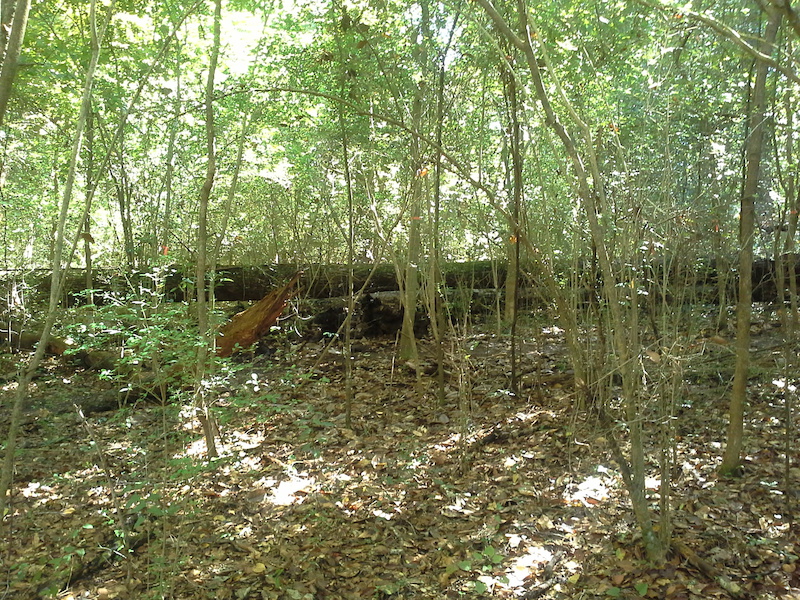 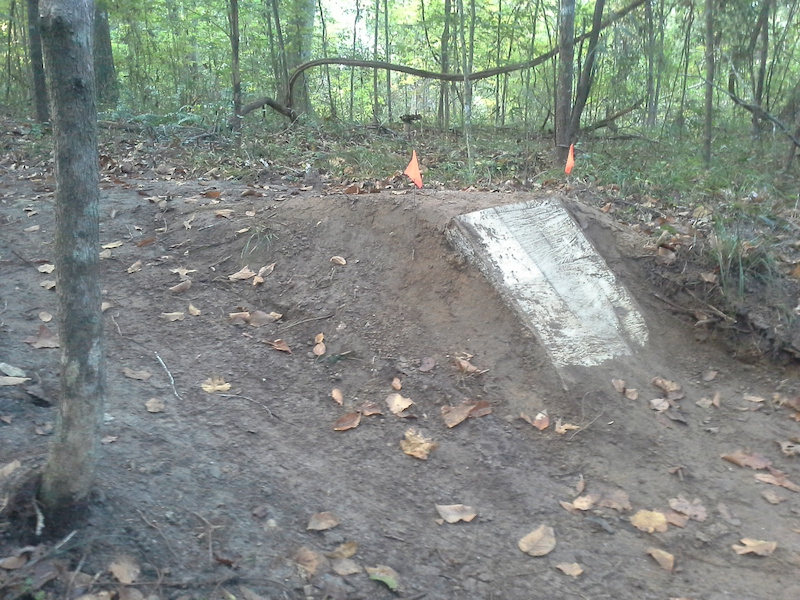 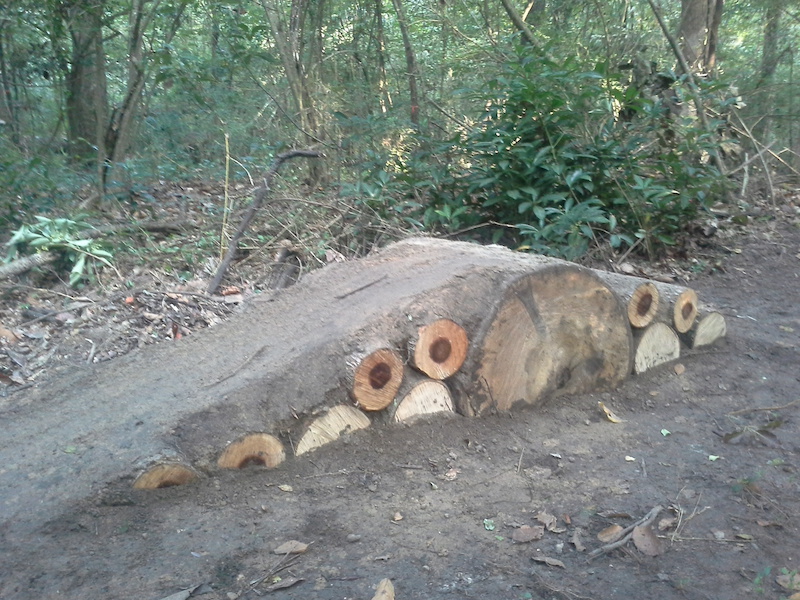 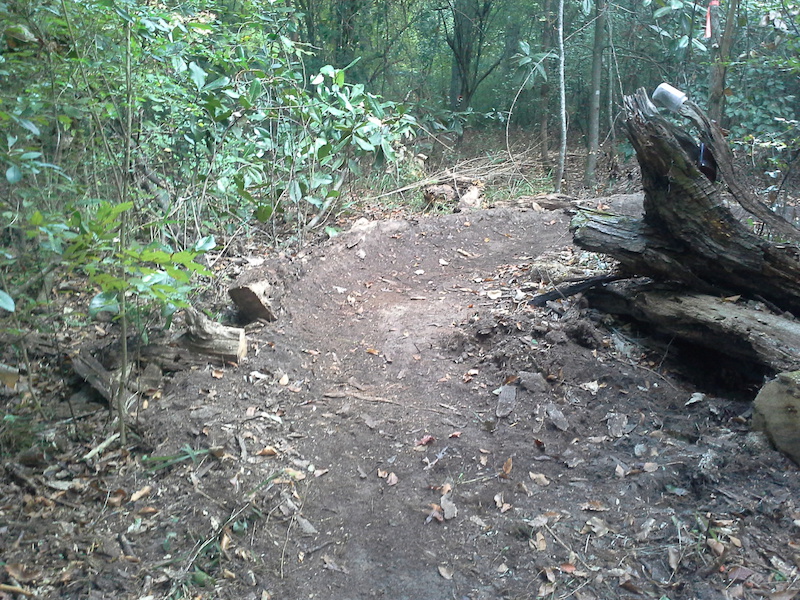 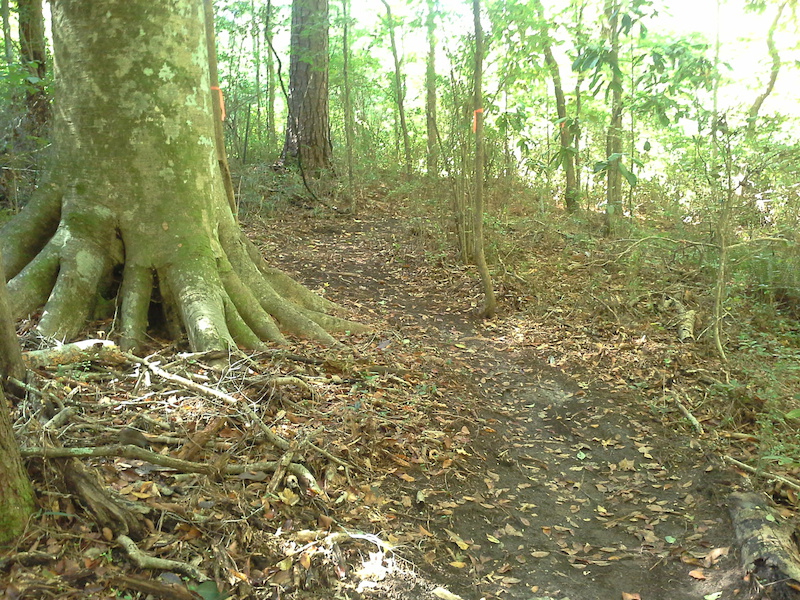 ShredMohr (Mar 10, 2016 at 15:17)
We now have 2 loops completed and the third loop is nearing completion . Several alternate lines have been created with advanced skill features on them. To find the location of the trails, go to the website Trailforks.com and search for Thomasville, GA . We are listed under " Magnolia Park " a.k.a. Northside Park . Come and enjoy the trails ! If you would like to let us know what you think of the trails , you can contact us through our Facebook page under Black Diamond Biking . Thanks , Mike