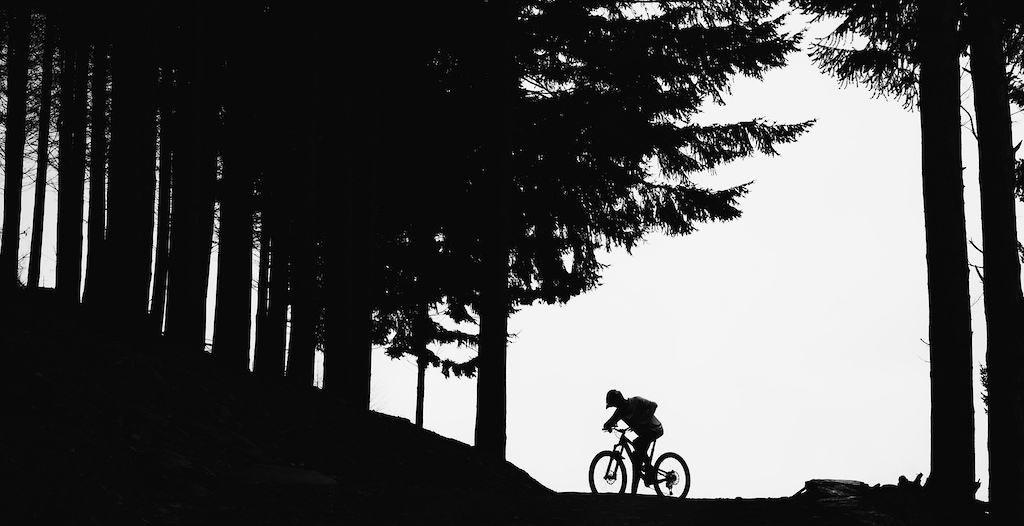 Everyone has their daily routines. Wake up, wash your face, check your phone, make a coffee, eat something, hop in your car, go to work etc. For most of us monotony is the framework by which we live our lives, and while Ben Hildred may be a special case, he is no exception. There are certain boundaries held by the framework that are universal. Everyone has 24 hours in one day, the sun will always come up and down, the seasons come and go every year and the only constant with the weather is change.

Ben is a descender who loves to climb. The climb is always sweetened by the fruit of the descent, no matter what and in that sense, the motivation for stacking vertical is quite simple. Piecing together rides in the winter months is a task that even the most hardcore dread. Navigating through the challenges each day brings, we as humans build little habits to maintain our day-to-day and ensure upkeep in our lives.

When setting out to conquer 1,000,000 feet (304,800m) of vertical, the only way to complete the challenge is by making your rides a mandatory piece of each day. For the average Millionaire, they would need to climb about 2,740 feet (835m) a day, every day in a 365-day year. There are many ways to visualize this: climb roughly twice the height of the Empire State Building every day, 2.5 times the height of the Eiffel Tower, 60 humpback whales stacked end to end… you get the idea. Ben decided to tackle the challenge in 200 days, averaging 5,000 feet (1524m) a day over the course of the challenge. 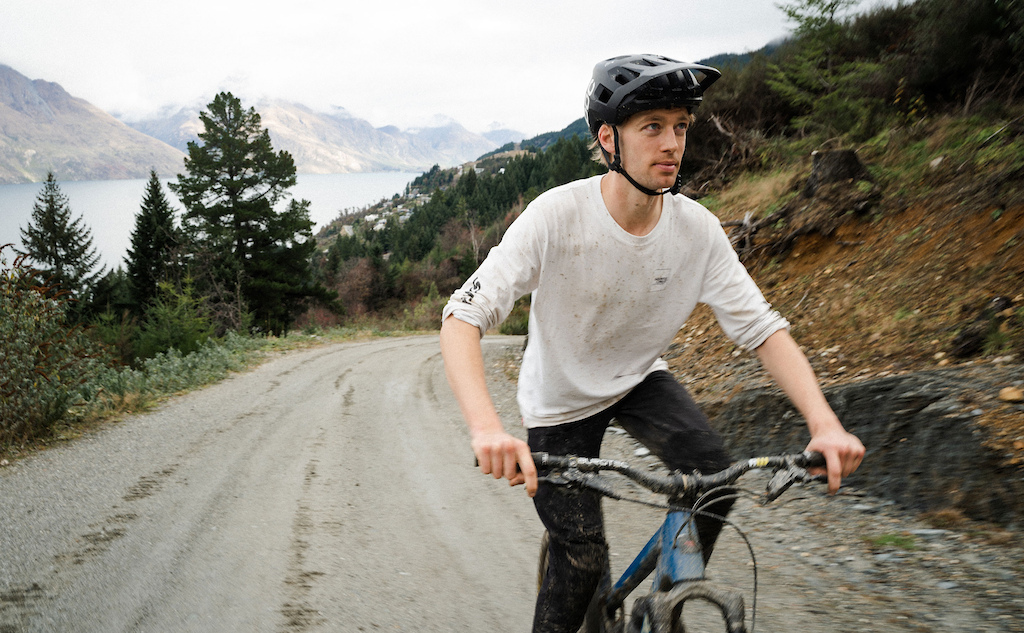 One doesn’t arrive at the foot of challenge like this by hopping off the couch. Ben got into these challenges through a true, honest love of pushing the pedals and rolling down the hill.

“The enjoyment of setting goals around my passion started with an Everest, then the Stratosphere, followed by the Olympus Mons, now the Million feet. It’d been on my radar and missing from the ‘daft climbing challenge’ résumé, something I’m aware a few people have done in the past and successfully completed in a year. The Million is different, it requires more, for longer, a massive amount of time, consistency in riding and good health, focus, planning and commitment.” 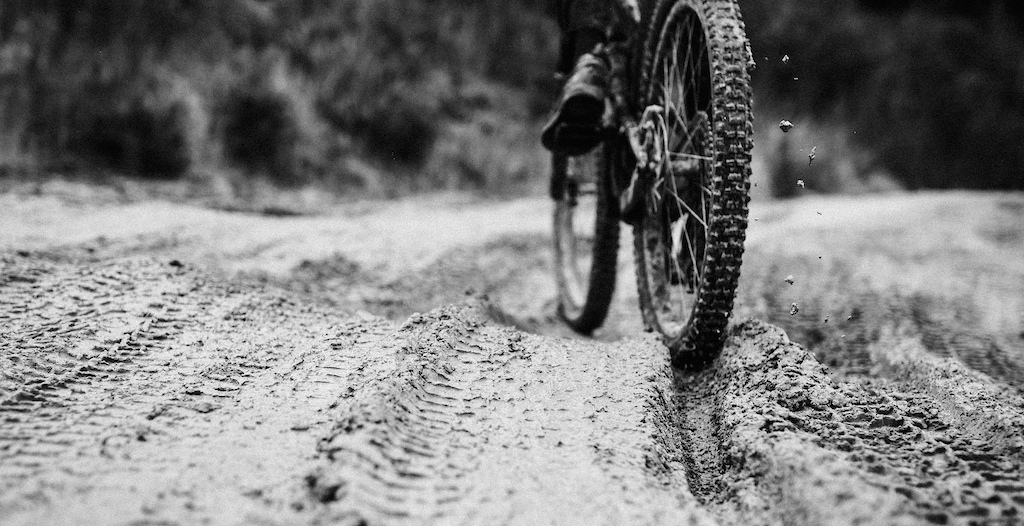 But why? Every person who burdens themselves with a challenge like this has different reasons.

“Wanting to know where limits are, how close can you get to them and what happens if they are exceeded, how deep down the rabbit hole can you squeeze. To understand the physical and mental capabilities and boundaries, to see how many balls could be juggled at once, for me - a full time job, a riding regime fit for a professional athlete or complete obsessive and a dash of regular life for the full flavor. “ 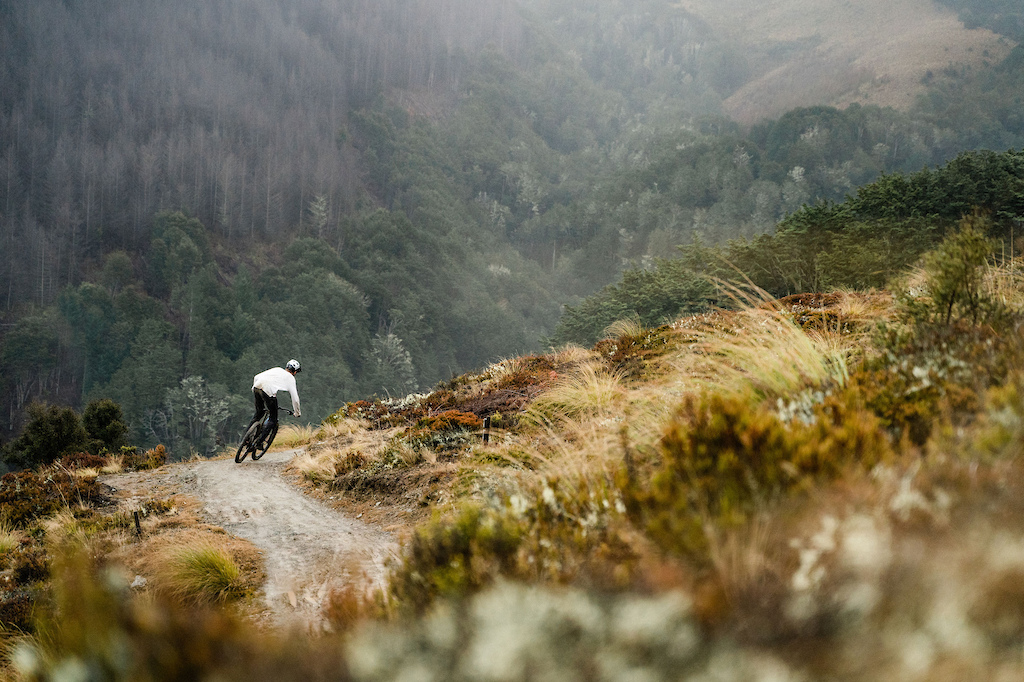 Like many of us, Ben has a full-time job. For the average rider, 5000 feet (1524m) in a single ride is a solid day in the saddle, but when you’re sandwiching it in-between working and sleeping you must be purposeful and direct. The road which Ben stacked the majority of his vertical on is the very same road that he did his other challenges on: the Queenstown Bike Park access road. Rising roughly 1500 feet (457m) from his place of work (Vertigo Bikes) to the top of the Queenstown Bike Park’s gondola, this was Ben’s stomping ground where he clocked his hours. For a healthy portion of this challenge, it was wintertime. Vertigo rent skis to tourists; Ben is one of the guys who prepares those skis. He would begin work early, getting the skis out the door in the dark hours, setting folks up for their day on the hill. In ski shops, it isn’t uncommon to work split shifts to accommodate the rushes of people at the beginning and end of the days. This is a huge factor in Ben’s success. From 10:30 AM until 3:30 PM his time would be his own to spend lapping the bike park. Returning to Vertigo as it got dark, he would clean and maintain his bike, a crucial part of his routine, and then assist the same folks he had helped that morning return their gear. This was his daily process.

The daylight in the winter is fleeting, and the conditions were often quite grim. Most of this part of the challenge was spent riding alone, and with the cold temperatures, snow and darkness it would be difficult to fault anyone for not wanting to go for a bike ride. But the only way to stay on target is by being rhythmic and purposeful, there is no fat to trim from this process. 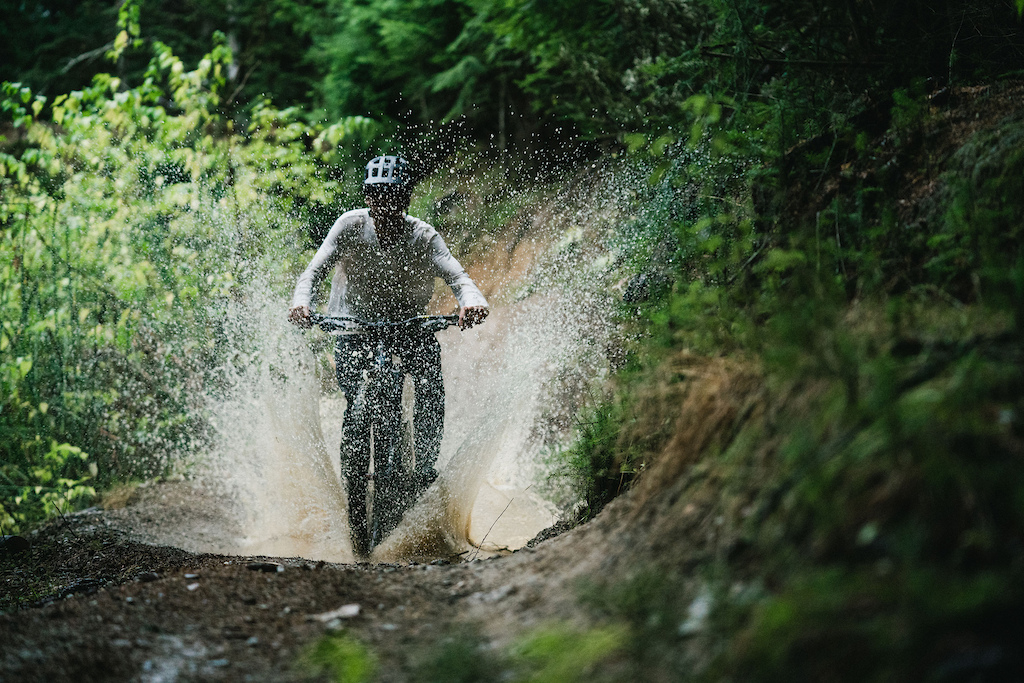 “During my biggest week in July, nothing else mattered apart from riding. Work was simply forced recovery time, sleep was gratefully welcomed although routinely interrupted by jolting leg cramp painful enough to wake me despite routine stretching, rolling and water. Every foot (70,190 ft / 21,394m) climbed that week was on my own, a solemn affair, the frozen conditions only interrupted by a day of heavy rainfall. Still, no days off, no excuse. My capacity to ignore negative existential factors and the fatigue I could feel deep within my bones sapped determination some days, in this empty mindset negatives are amplified to deafening degrees and the wall of resilience takes a pounding. Big back-to-back days of numb fingers and hollow thoughts really gripped and twisted my hold on reality and logical thinking. I was so exhausted one night that food became too much of a chore. After nine and a half hours at work split down the middle of the day with a 10,000 foot (3000m) bike ride, I took a can of beetroot to bed, that’ll do, sleep took priority, I needed to be up early to ride my bike after all.” 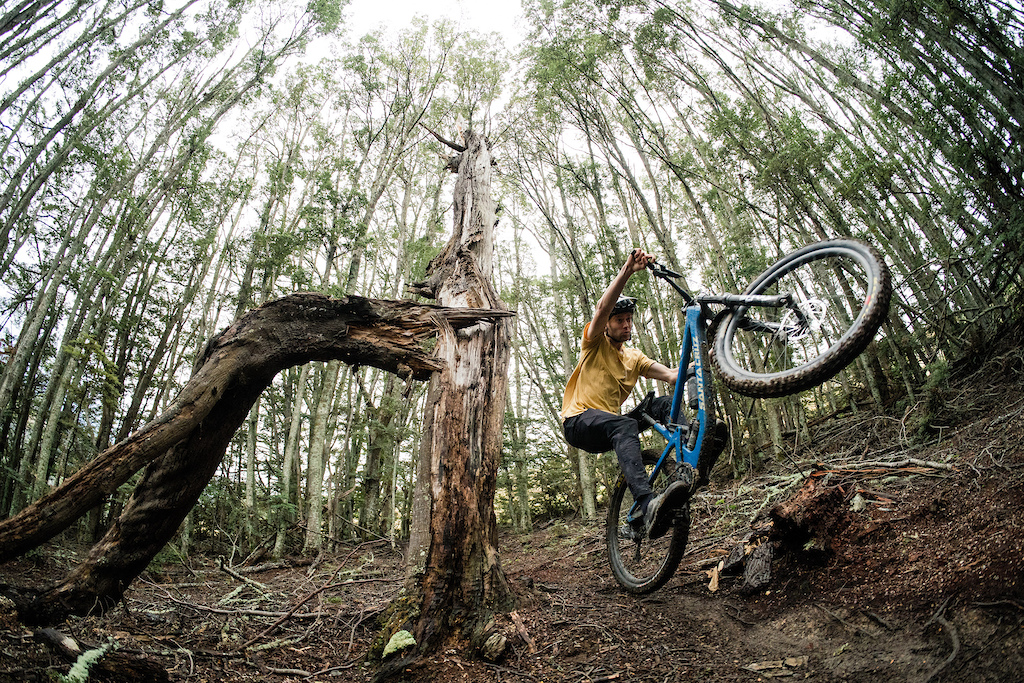 It wasn’t all ice and snow though. The early days of the challenge found Ben doing exciting new rides that he had never done before such as the Old Ghost Road. Just a quick 435 mile (700km) pedal up the west coast of New Zealand from Queenstown, the Old Ghost Road is an 53 mile (85km) mining path that has been resurrected for backpacking and cycling. Also included in his rides outside of the bike park were some days spent in the Beech forests of Craigieburn. 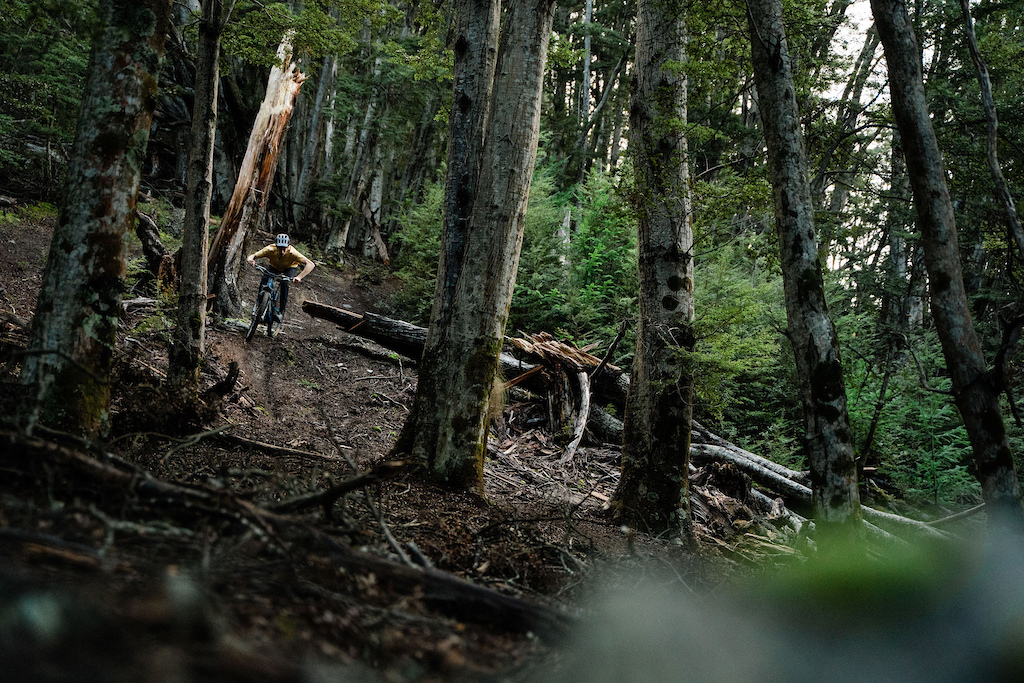 You may be wondering how the body responds to this sort of treatment, and the answer is complicated. The entire ride was mired with several health upsets, the worst of which was a hemorrhage in his right eye, rendering him with poor vision for a good chunk of January. Between then and July, he would end up having to go to the hospital in Dunedin to have injections in his eye, improving the healing process and allowing him to see. This proved to complicate things, as Dunedin is quite far from Queenstown. On those days ben would have to awaken around 4:30 AM to get his rides in, as after his injections he couldn’t risk raising his heartrate.

“Turns out it was a hemorrhage on the back of my eye caused by the early onset of molecular degeneration, all a bit full on. I rode my bike to the opticians as the return journey was uphill, I was told not to do anything that would raise blood pressure. I was thankful for the 52-tooth cassette those days. Every month since has included taking a day out to get eyeball injections which is exactly as grim as it sounds, to prevent any further damage. This meant riding first thing in the morning before the eye drops and numbing injections stopped me pedaling. Most vision has returned although still very distorted, there is a lot of reliance on my left eye, this has affected my depth perception and been a strong influence in the trails I ride, treading familiar ground helped confidence.” 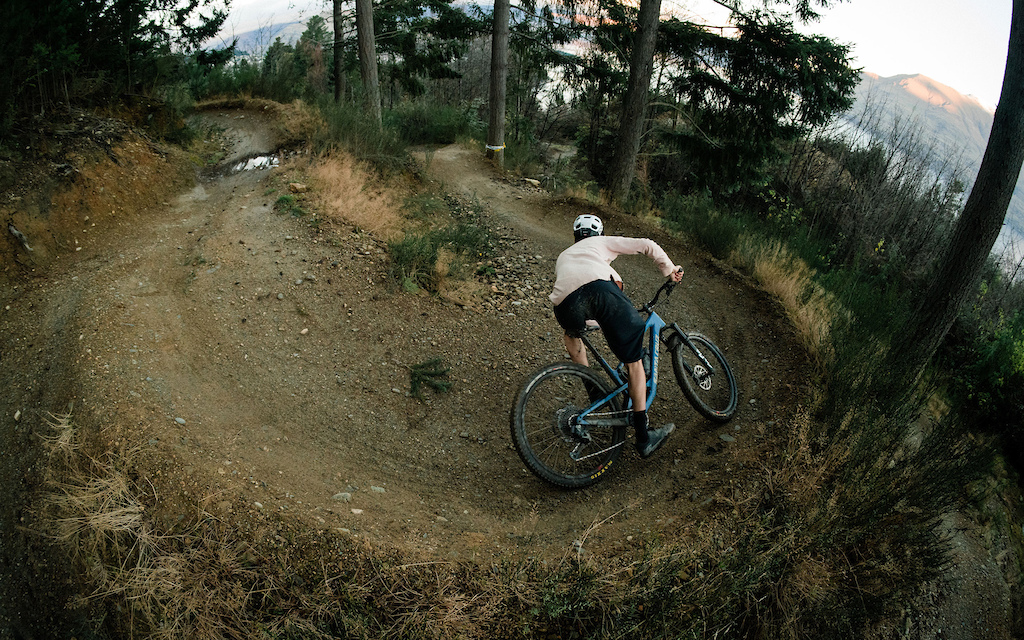 Aside from the odd slide-out or hang-up, Ben remained injury free, relying on a regimen of hydration, meticulous stretching and quality sleep to keep his body maintained and action-ready. The diet was comprised primarily of massive amounts of vegetables. And of course, if you’ve been to Queenstown, you would be familiar with Ferg Burger. He snuck a few of the tofu burgers in on the bigger days. 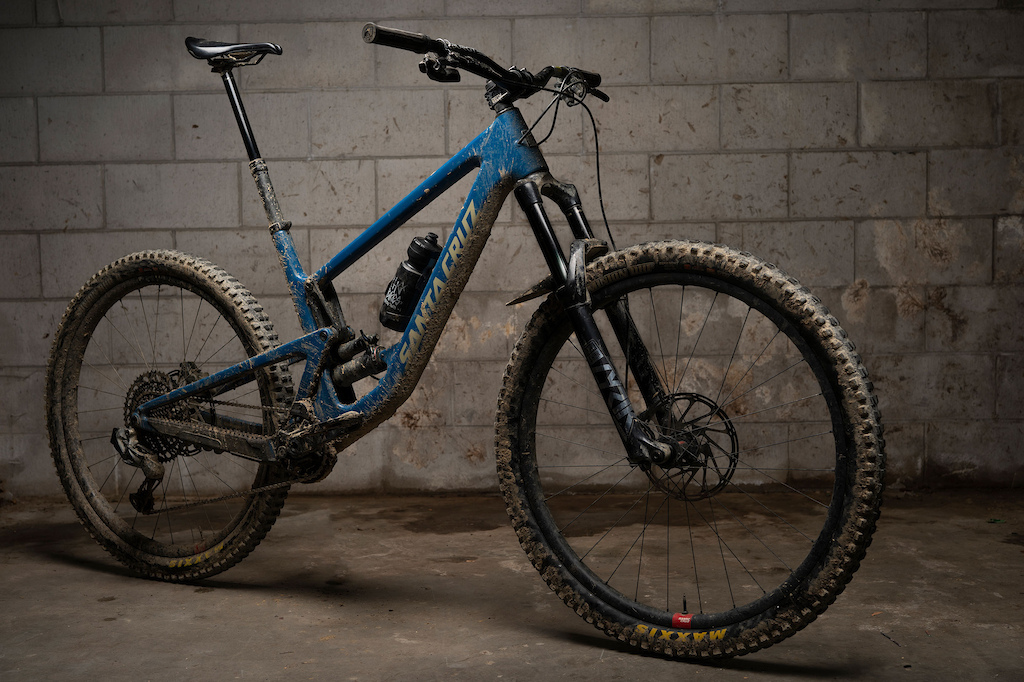 So, there you have it. A brief run-down of the 200 days devoted to riding to an elevation that would put him fairly close to the middle of the Van Allen Radiation belt surrounding our planet. Here are the quick numbers just for a recap:

With roughly 8000km, two winters, and two monster climbing challenges (the Olympus Mons and the Millionaire in 200 days) under their belt, Ben's XG-1295 Eagle cassette and X-Sync 2 chainring are ready for well-deserved retirement. 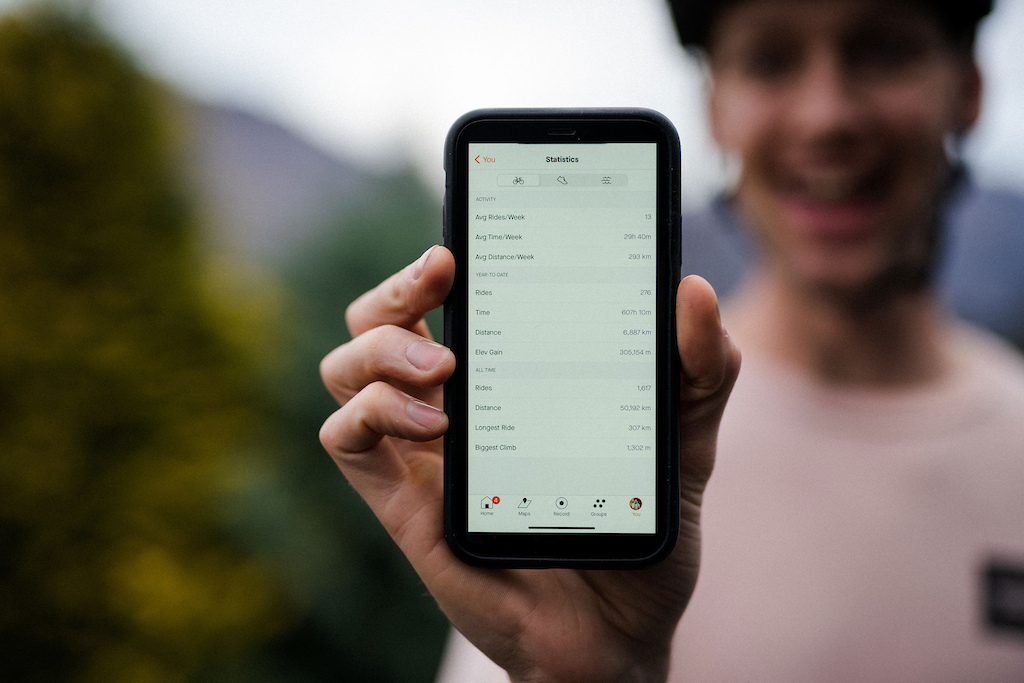 If you are bewildered by Ben’s effort, we can’t really fault you for it. There are very few who are capable of riding this much, and of those who are, even fewer actually do it. As far as he is aware Ben has set the new mountain bike time standard for 1,000,000 feet of climbing: 200 days. 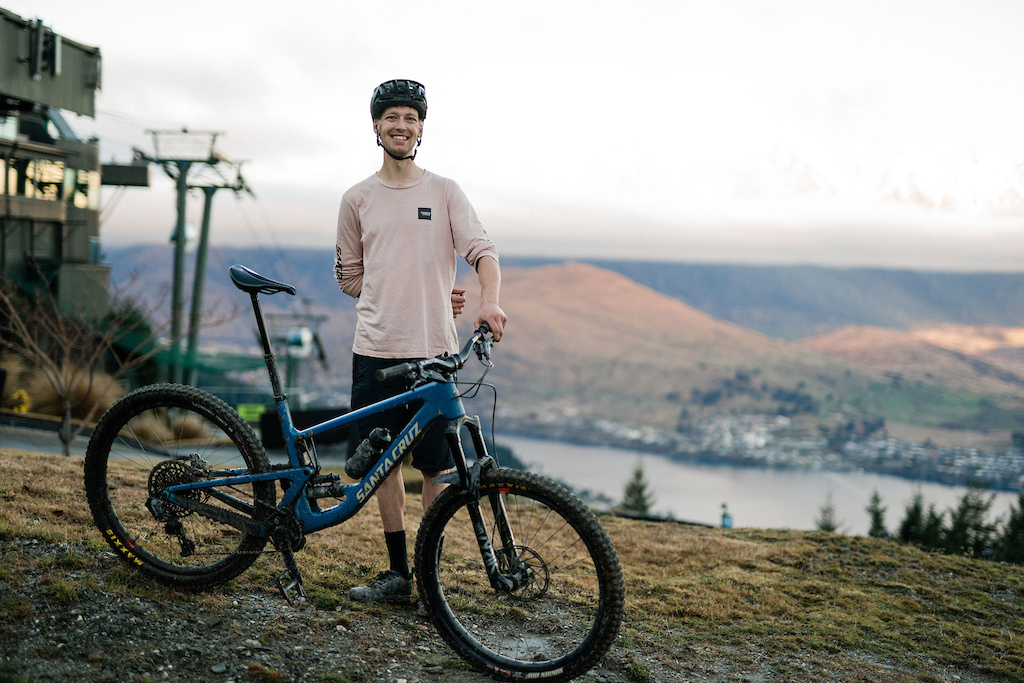 It’s likely that no one will be taking his Strava Local Legend status on the bike park road this year. And, if you’re wondering what a person does after completing a challenge like this, the answer is quite simple: keep going. Ben hasn’t taken a day off riding since he finished the challenge.

mackg (Jul 30, 2021 at 10:26)
It's hard to even comprehend doing a 1524m vert ride for 200 days straight. The mental strength to put on your gear and turn that first crank each day for that many days is unbelievable. The fact that he also hasn't stopped since completing this challenge is certified psychopath status. You're on a whole different level Ben, massive respect.

Konda (Aug 2, 2021 at 0:10)
@Jvhowube: definitely. There is a clear difference between the aluminium big cog on the cassette and the rest, which are steel.

MQTBMX (Jul 30, 2021 at 13:35)
I met Ben at BearBack Biking in Whistler. He is one of the kindest humans I have ever encountered and had the pleasure of riding with. Ben you are a true gem, way to go my friend!

JonCon (Jul 30, 2021 at 12:40)
Massive effort Ben, congratulations dude! Very impressive, but even more so when maintaining a FULL TIME JOB.

(Also rather impressive for someone from Lincolnshire!)

William001 (Jul 30, 2021 at 13:31)
Absolutely impressed with the athleticism conducted by such an individual who did not have the elevation to practice or ride such an achievement on as such back in England in his youthful days.

Jacquers (Jul 30, 2021 at 23:07)
Well done, that's a lot of climbing. Pity that that he can't just replace the worn cogs on the cassette instead of the entire thing. I hop it at least gets recycled.

streetkvnt-kvlt (Jul 31, 2021 at 16:15)
The fact that he's getting out on the bike on those Queenstown winter mornings says more than enough.

blackapturphoto (Aug 1, 2021 at 17:22)
I want to know just how many times he has climbed the access road in his lifetime

BenTheSwabian (Jul 30, 2021 at 12:36)
Hell yeah Ben! You're a legend! Just a shame that most people around here due to their downhill bias probably can't even comprehend what an absolutely massive achievement this is.