Video: Graham Agassiz Ticks Off a Massive Descent in 'Decade' 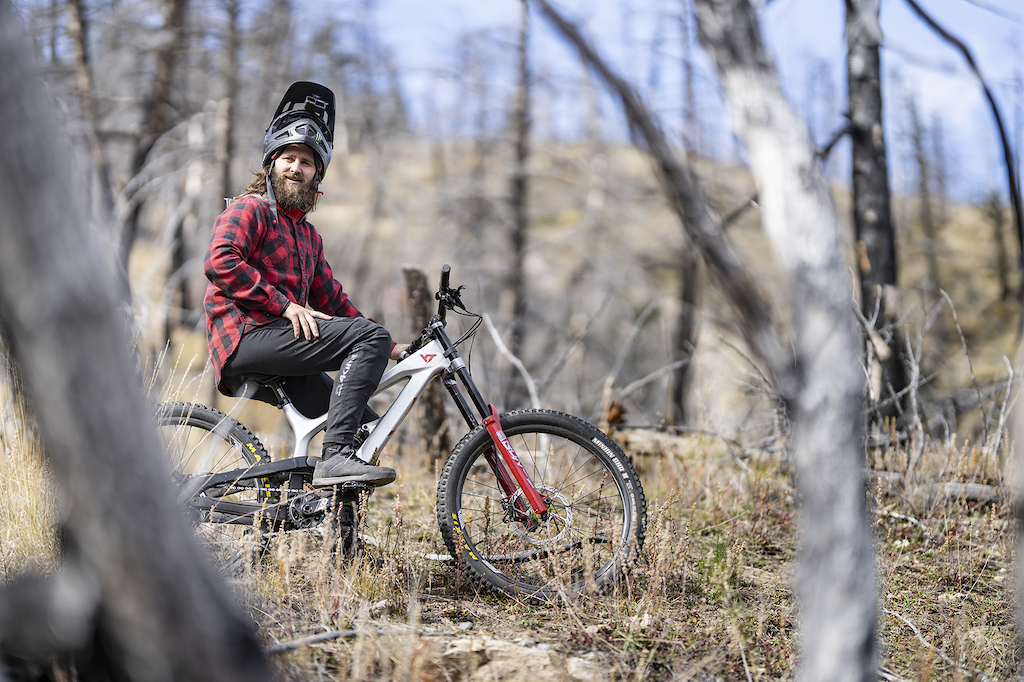 Decade
featuring
Graham Agassiz
Some people are better than others at spotting potential, and an even fewer number can bring those dreams to life. It takes a brilliant mind to gaze into the future and see what’s coming, and Graham Agassiz can see for miles. 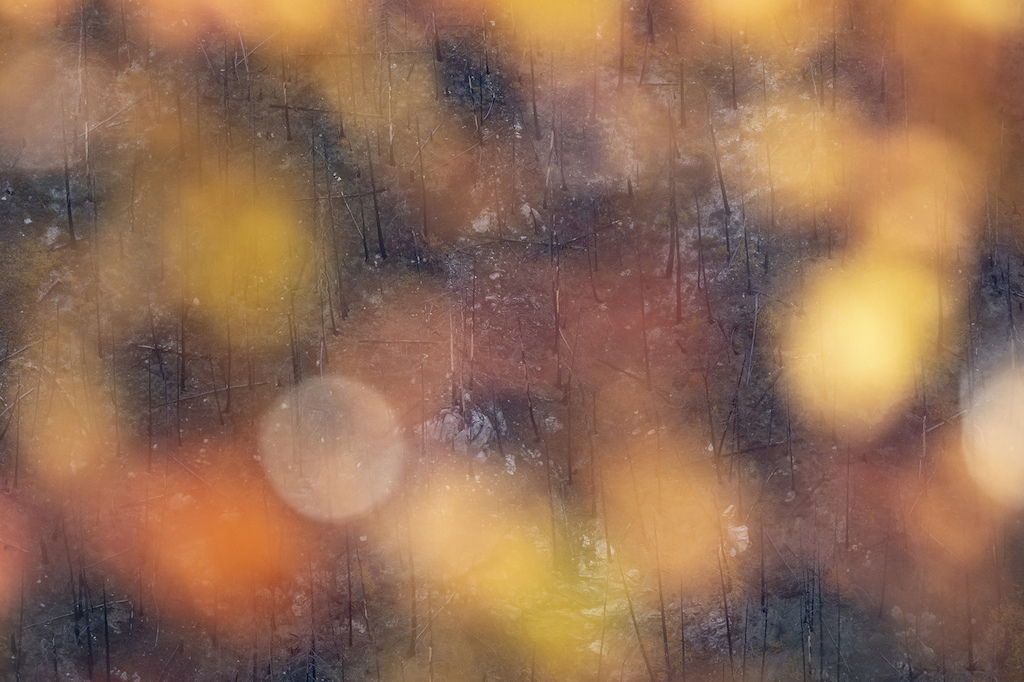 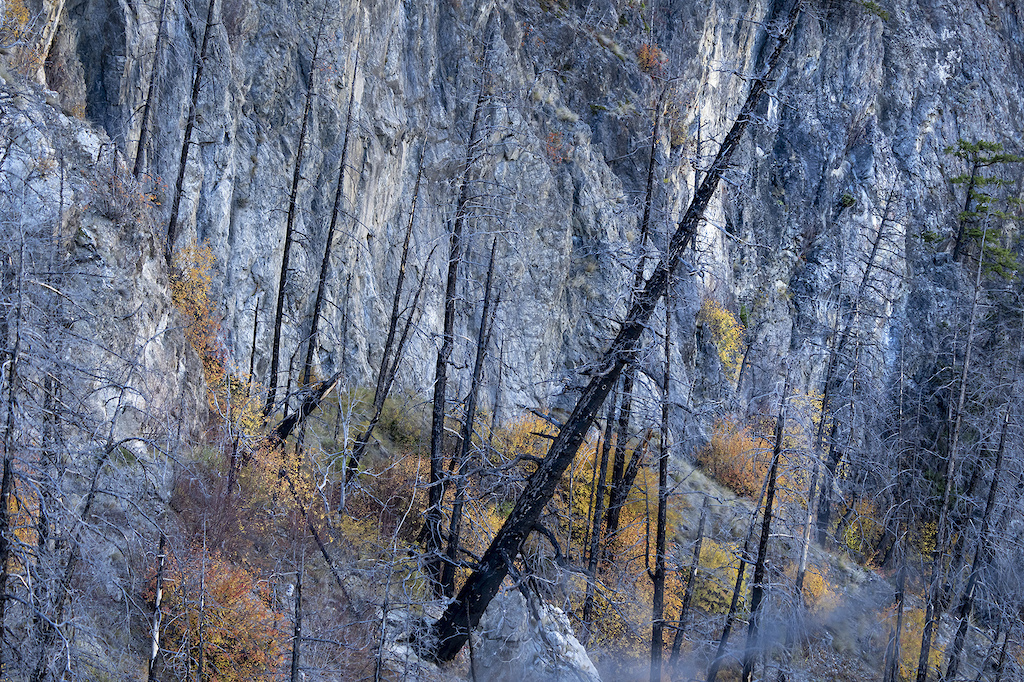 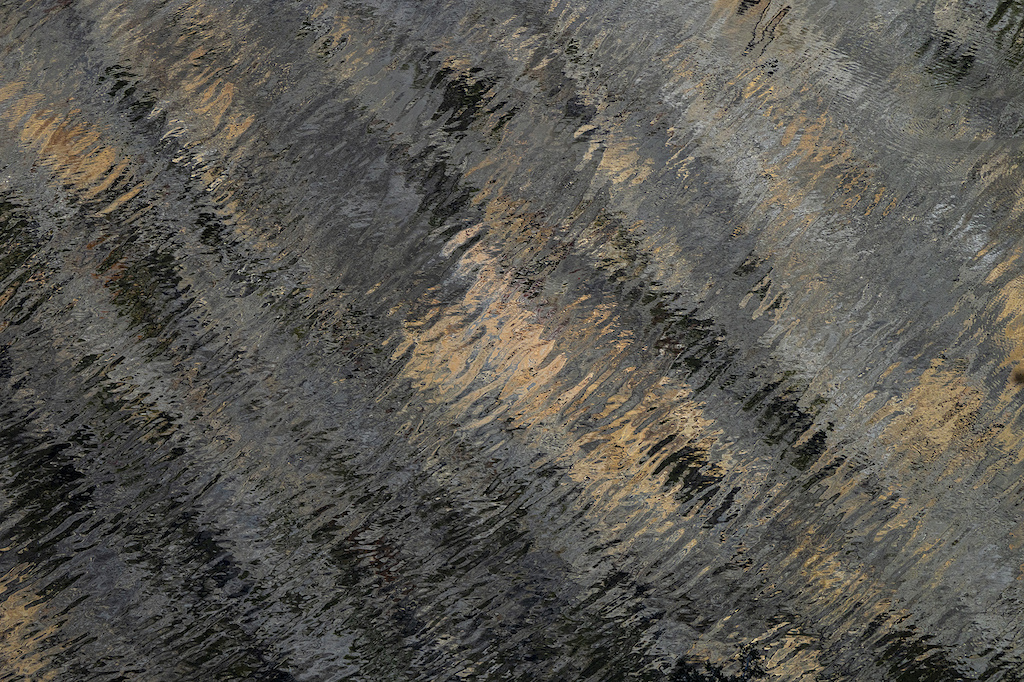 Graham grew up in Kamloops, British Columbia, a hub of freeride mountain biking. The surrounding landscapes have inspired riders’ minds for generations, manipulating their minds to recognize the potential in the natural terrain. 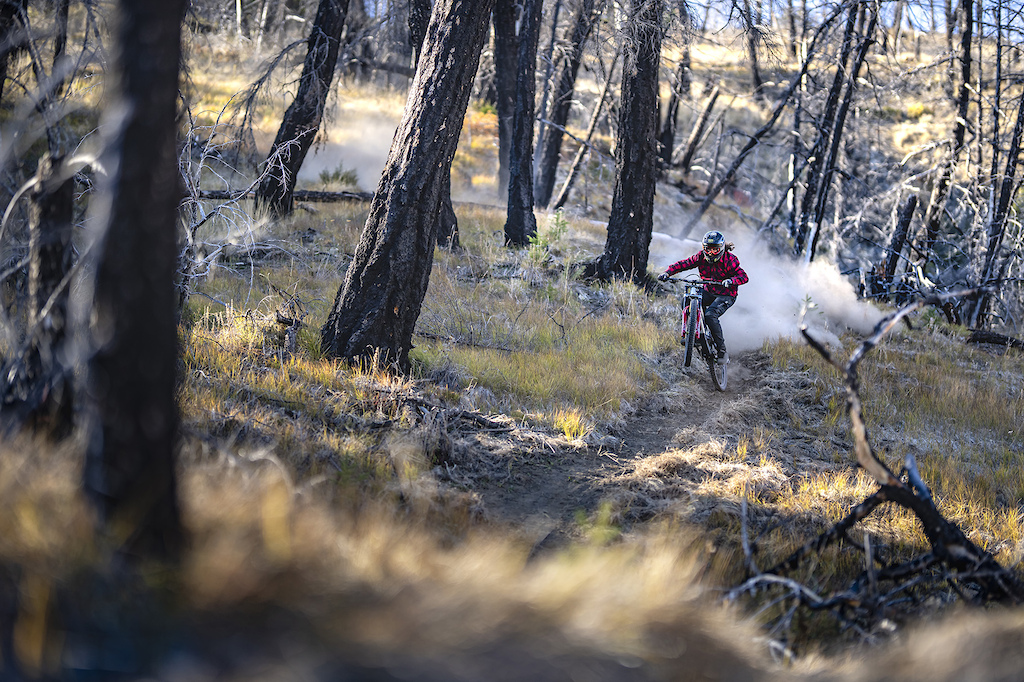 A decade ago, Graham first noticed the chute out of his truck window while on his way elsewhere. At this point, his skills on a bike had given him a professional athlete career and taken him around the globe travelling all over competing, filming, and exploring new terrain – all of which were well within the pocket of his comfort zone. He was at the forefront of a new guard of competition, equipped with both slopestyle and big mountain skillsets and although his job called him to the contests and exotic film shoots, the backcountry lines of B.C. called to his soul.

When trying to make sense of his own aspirations, Graham’s often found himself inspired by his friend and mentor, Mason Mashon. Mason’s a few years older than Graham, and over the years has helped him to realize and understand the idea challenging the impossible. So, when Graham spotted the chute from the highway that day 10 years ago, he brought the idea of riding it to Mason who he knew could help bring the idea to life. 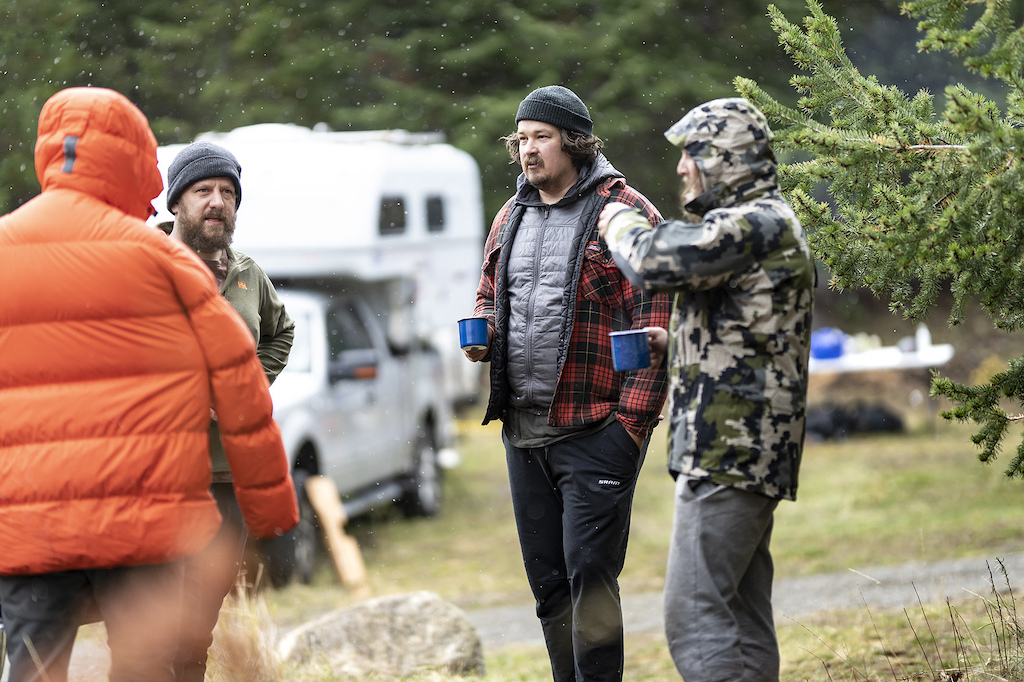 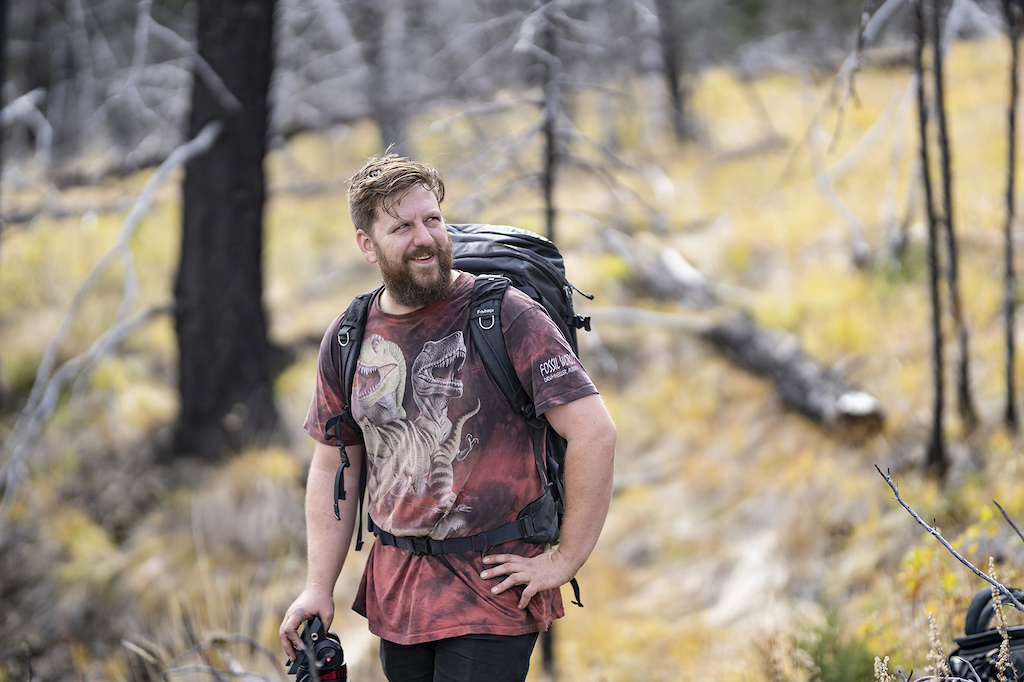 Good news travels fast, and with the excitement of a new mystery chute circulating throughout the B.C. mountain bike community, both assembling a crew and starting the build happened more easily than expected. However, after a few initial days of scouting and trail work, they had bitten off more than they could chew and had to pull out of the project leaving the line left unrideable. 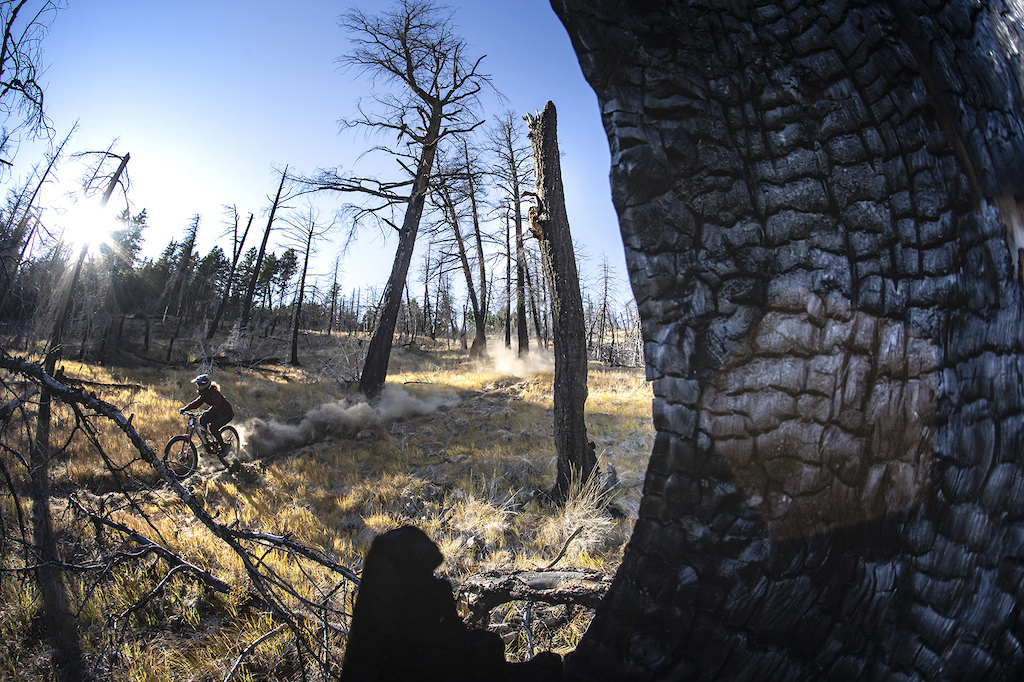 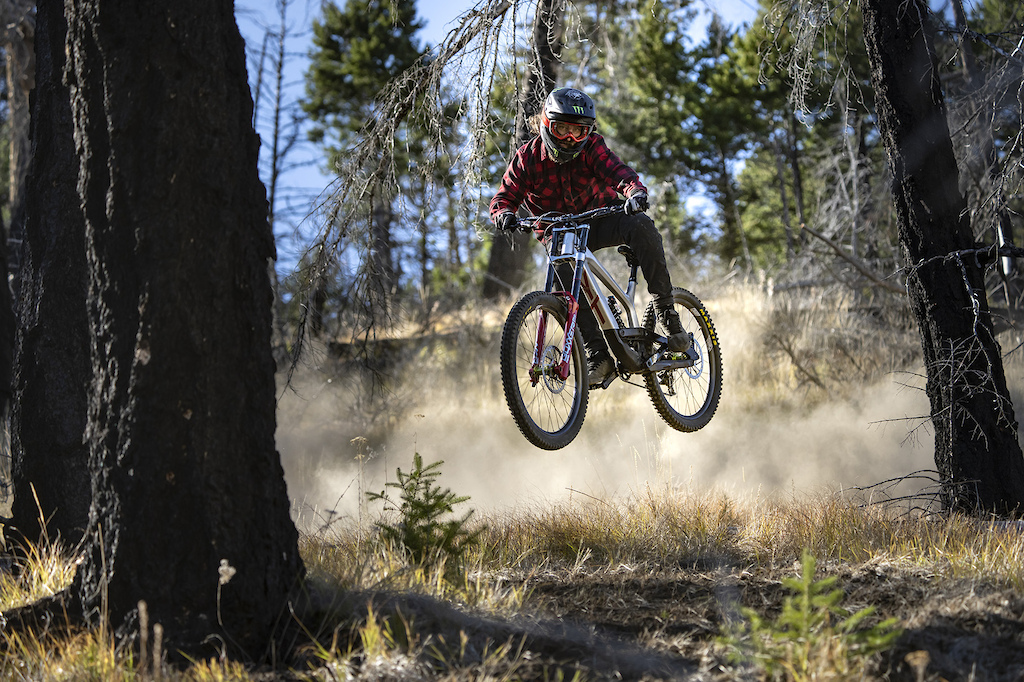 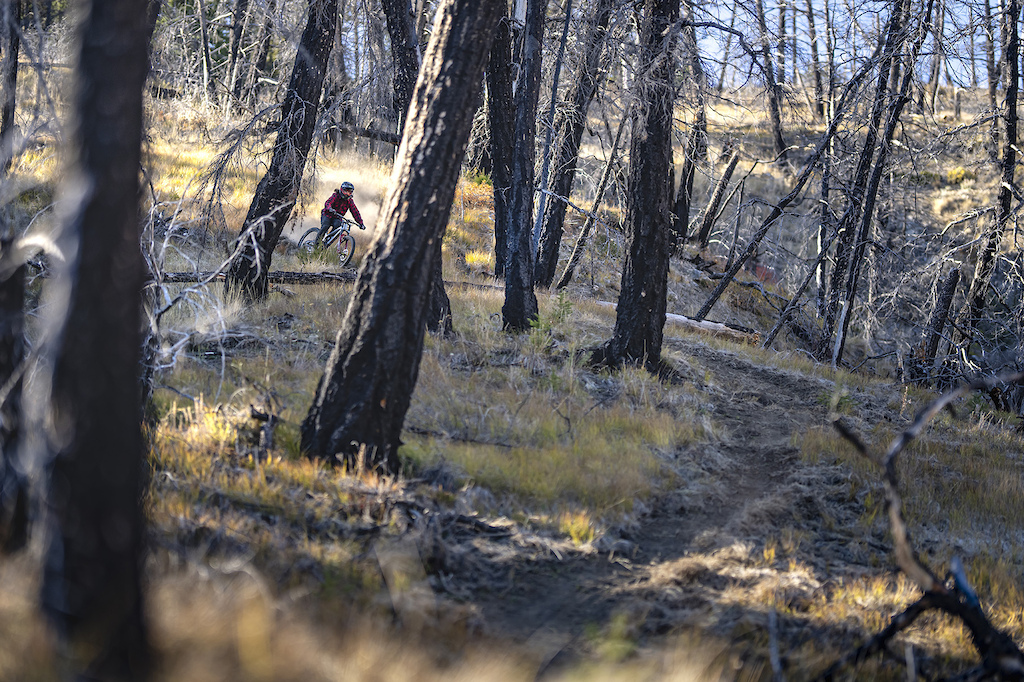 The initial dig went well but it also wasn’t meant to be - at least, not yet. Plagued with injuries, scheduling conflicts, and competitions, it would take several years to return to the chute. As the time went on, Graham’s draw to the project grew stronger. And it wasn’t just his desire to be there, but more so his desire to not be where he was. The demands of contests like Rampage are real, forcing rigidity and structure on the self-expressive nature of freeride. There’s of course room for creativity, but only so long as it fits into the week of building, and you have control over your line. The contest is baked with anxiety, compromise, and stress, which didn’t allow for the freedom Graham sought. 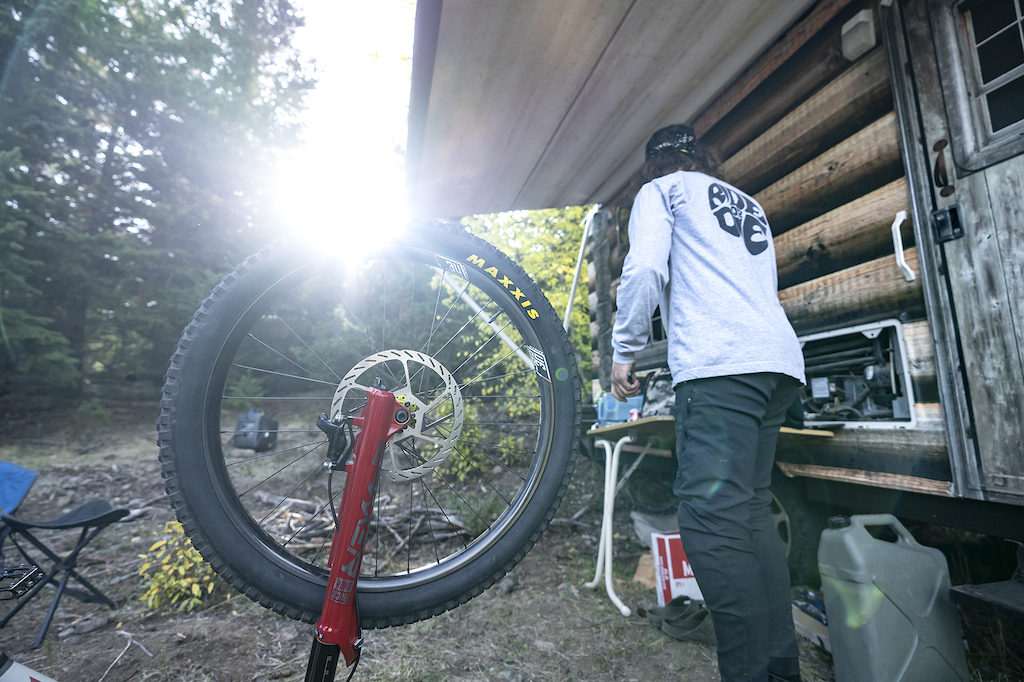 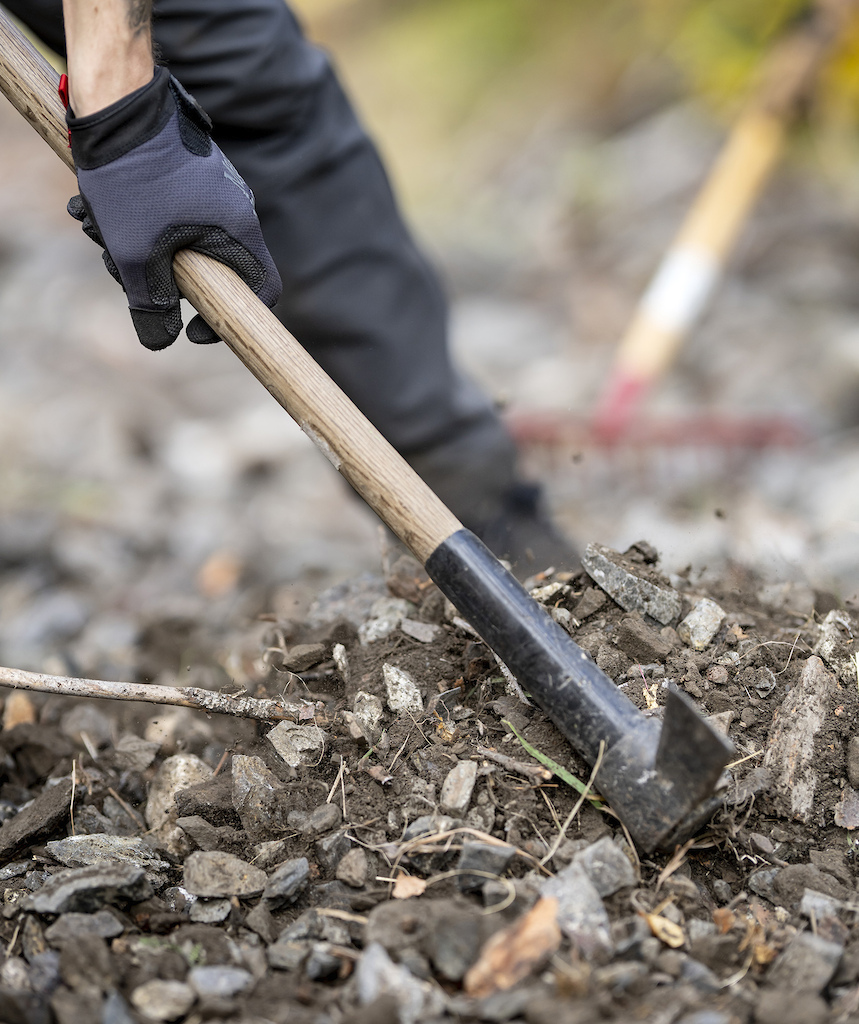 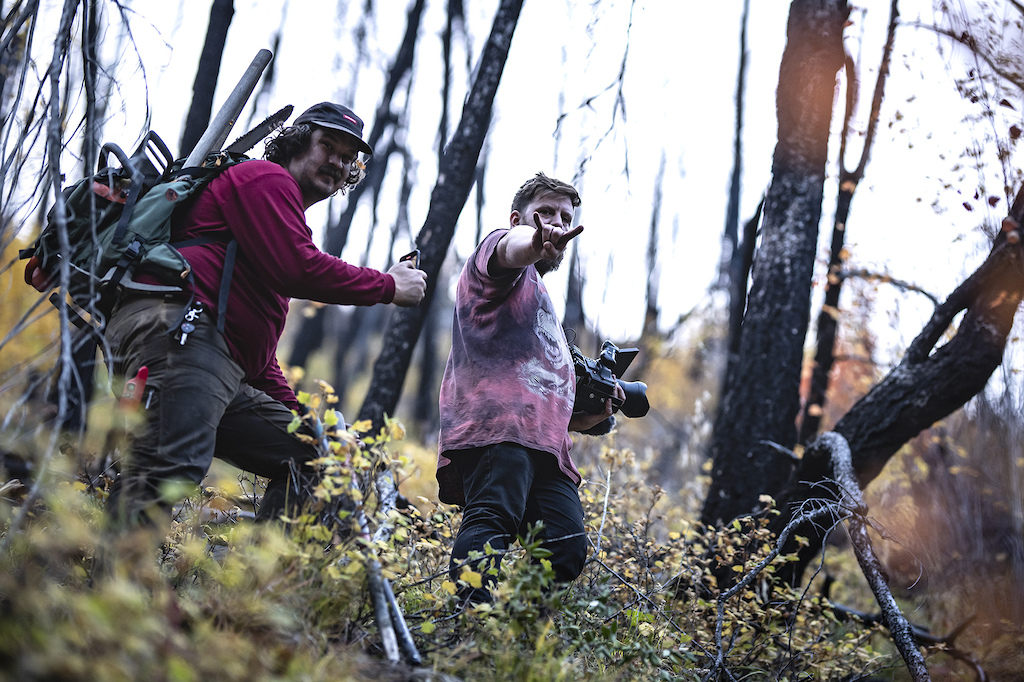 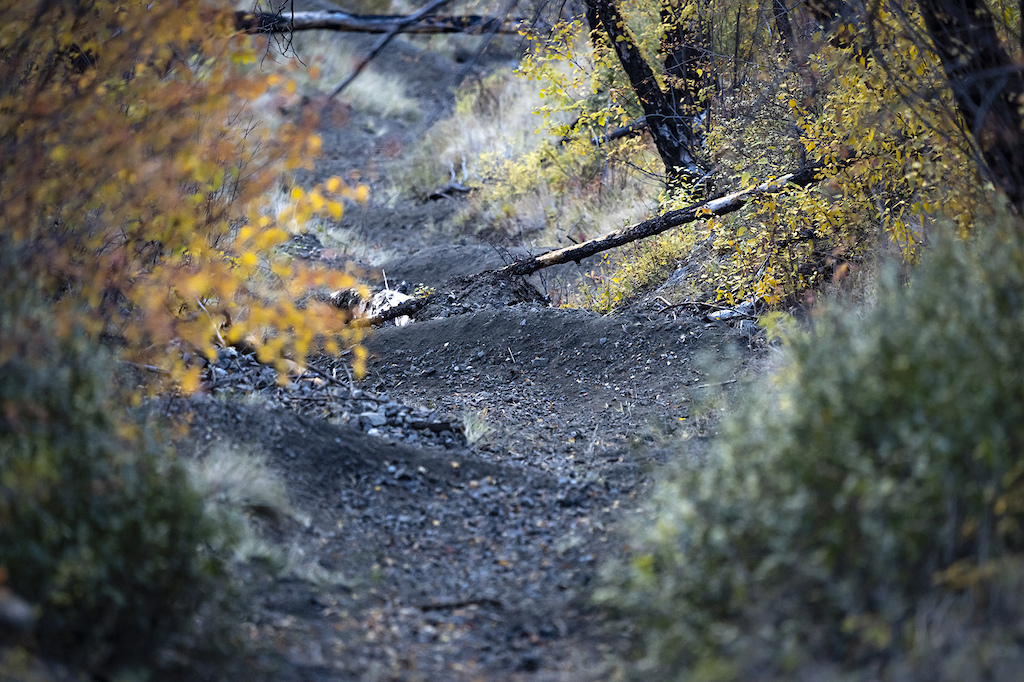 Four years after first putting tools to the line, the time was finally right to head back into the chute. With Rampage out of the picture, Graham was free to dedicate his mind and immerse himself in the project. With a basecamp established, the gang once again came together to move thousands of pounds of shale, logs, rocks, and dirt. Swapping old stories while simultaneously creating new ones, everyone knew they were in the right place despite the discomfort. 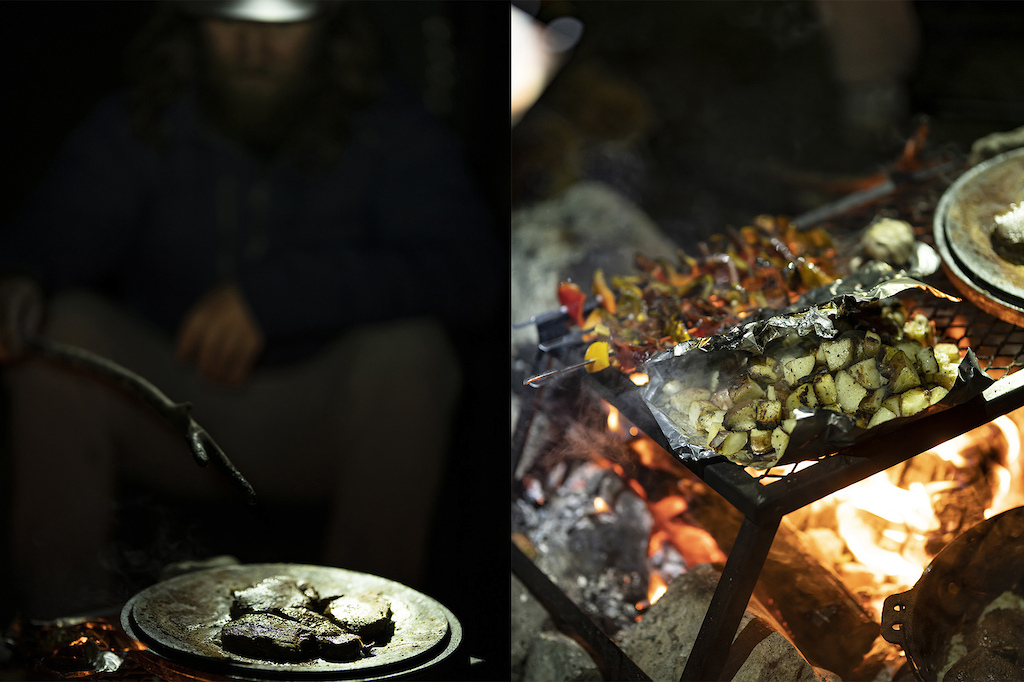 Going into this, the crew knew that some comforts would be left at home - but Graham made sure that didn’t mean meals. Over the years, he’d taken up hunting and fishing to further connect with and understand the outdoors, and he’d brought along Chinook salmon, mule deer, and the last bit of moose from the previous hunting season. Graham and Mason teamed up to make delicious meals each night, providing for the body as well as the mind with their knack for backcountry cooking. Roasting game meat over a fire of juniper on the grill (“Grizellda”) and utilizing a large Dutch oven (“the Dutchess”), game meat and fresh vegetables were prepared daily. Grizellda and the Dutchess were a duo that everyone was glad to see at the end of each day. 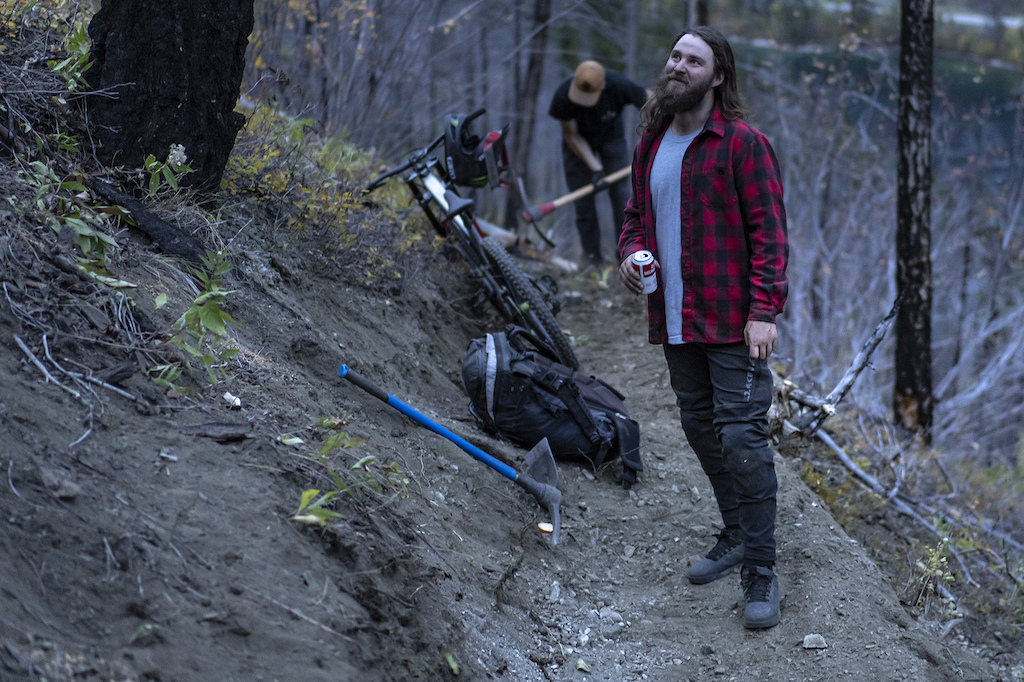 As the dig days dragged on, the added complexities of frost and snow were wearing everyone down. With only a few hours of direct sun and a fire in the evening to maintain each one’s life force, an exit was established out of the chute and in the most substantial digging effort yet. Finishing with a massive bench and catch berm to control exit speed meant one thing: the next morning, the chute would be ridden. 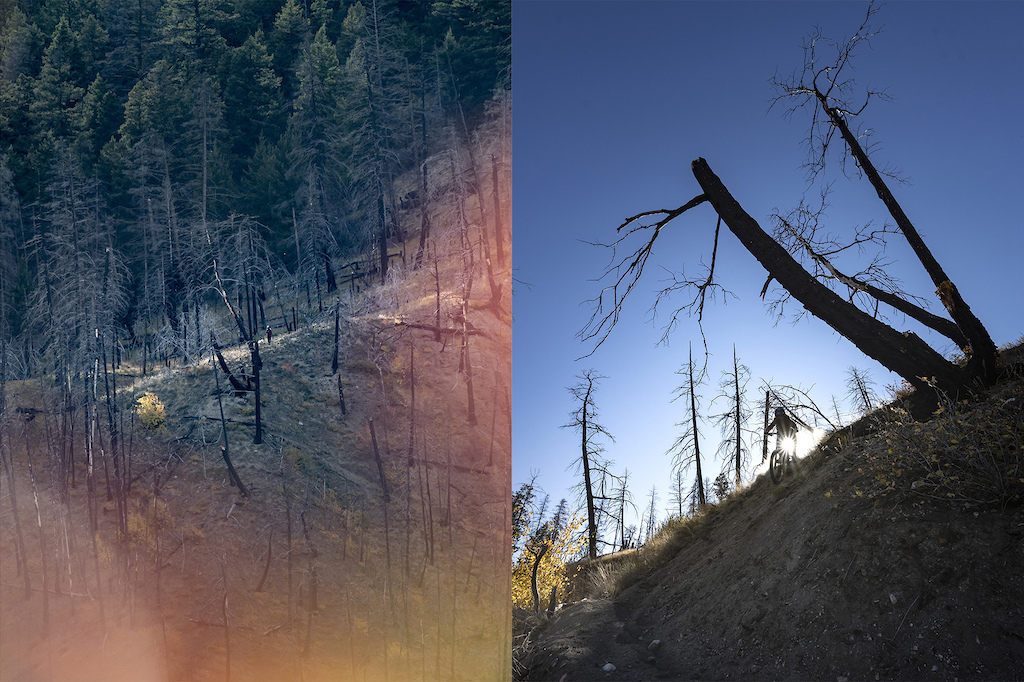 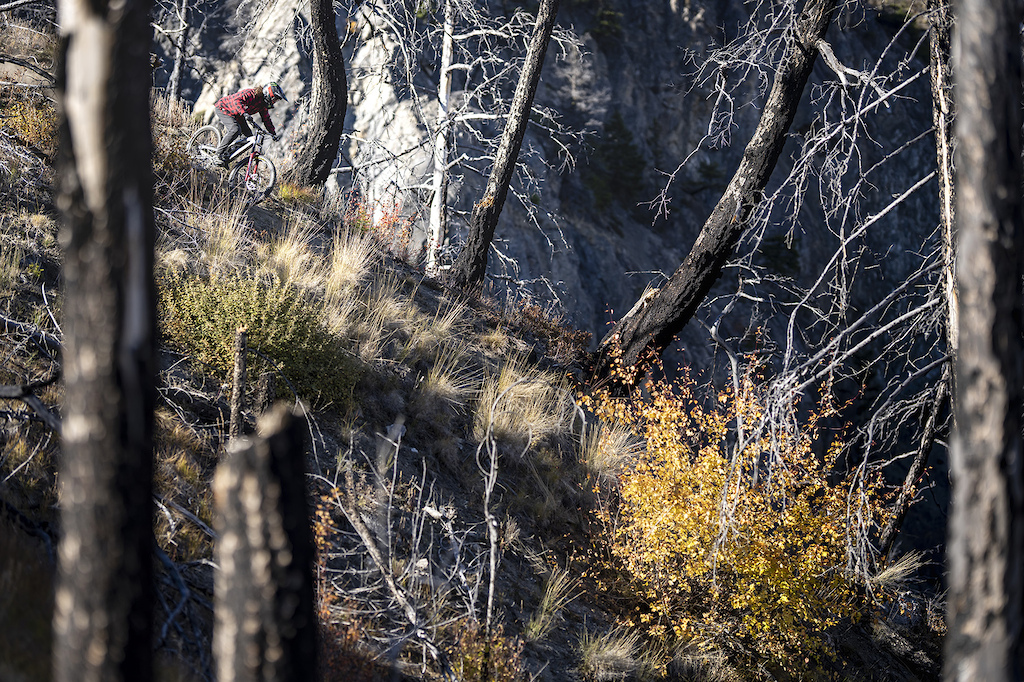 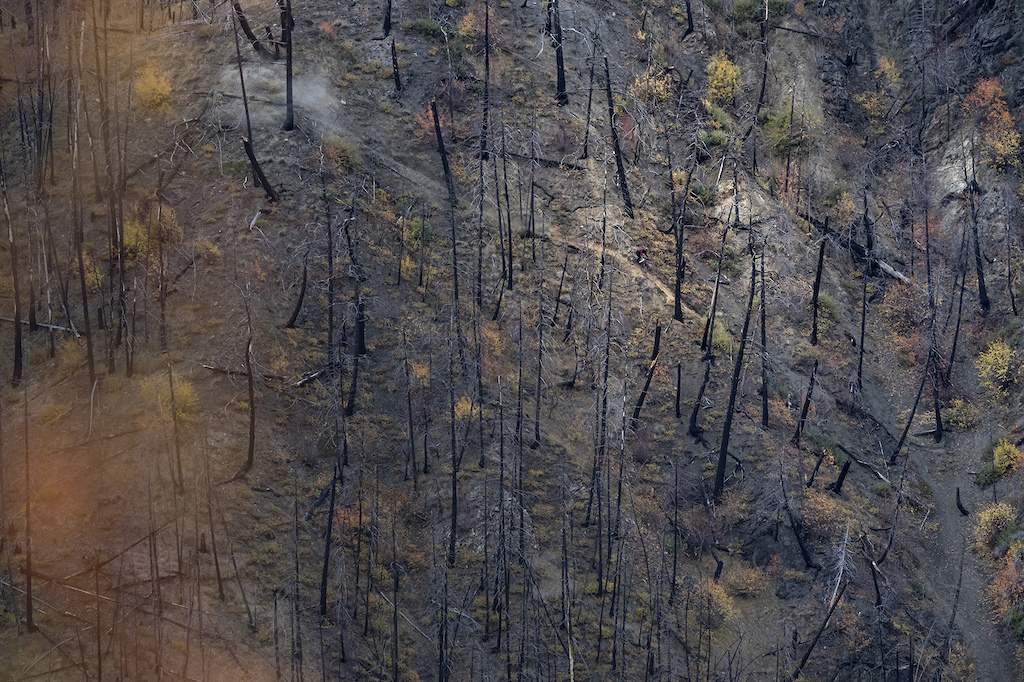 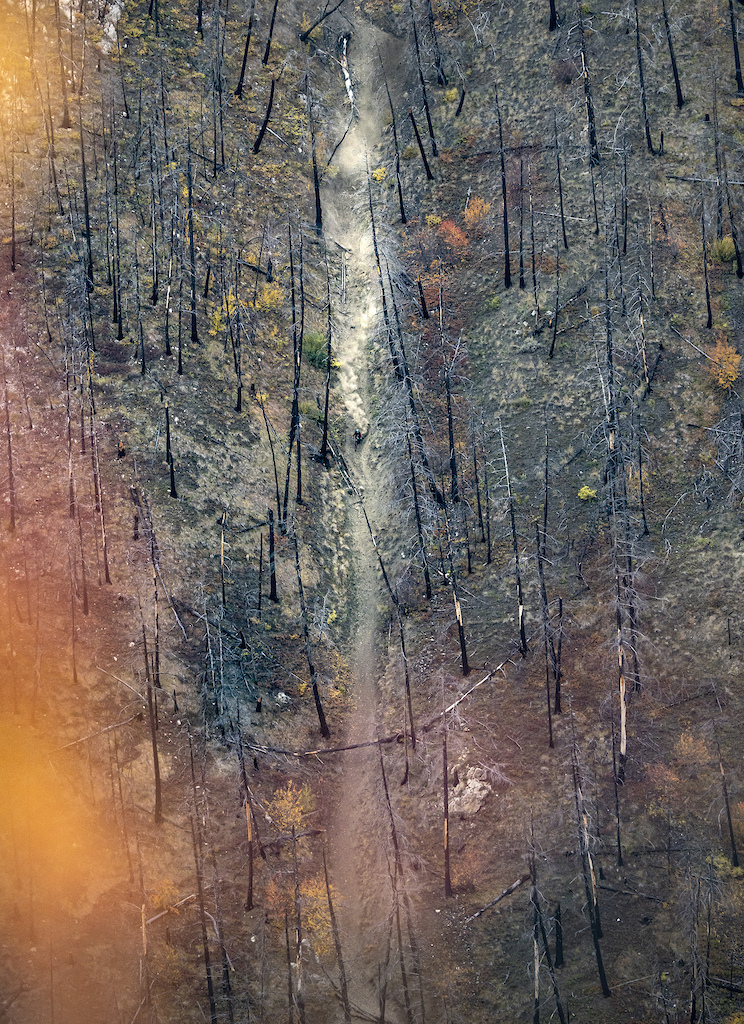 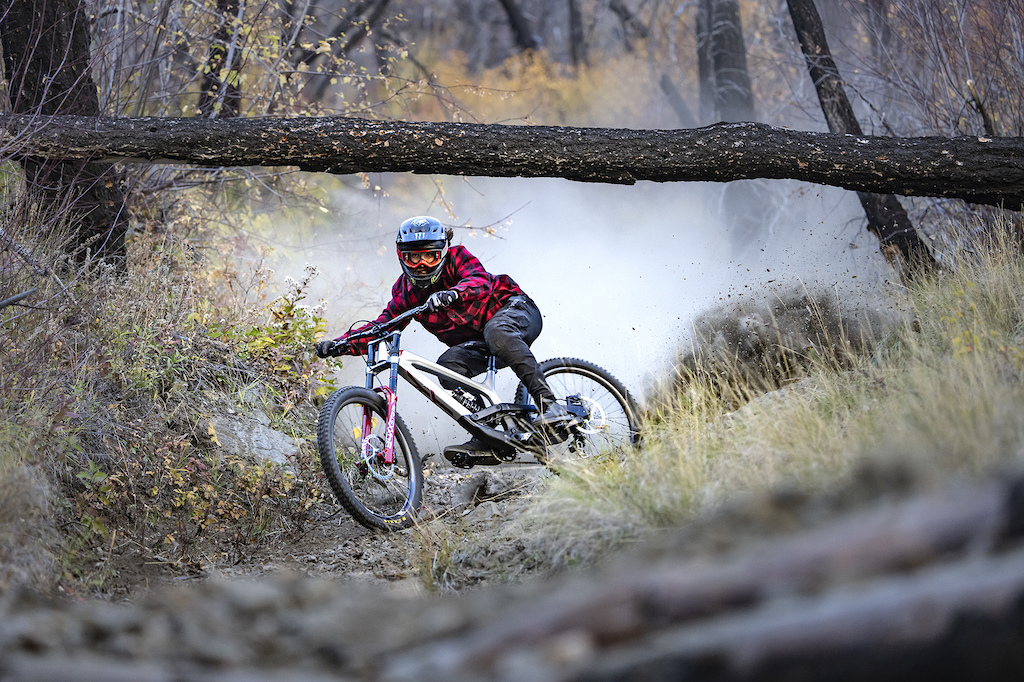 10 years raged by in one minute and nine seconds. Fear, anticipation, and satisfaction came together in one wild ride. Every win deserves a victory lap, so Graham opted for a second lap down the chute to add in the flair he’s become so well-known for. When he first spotted the line, he knew it was where he wanted to be, even if it didn’t make sense in the moment. That belief and self-confidence is what’s carried him through the years, through his career, and down this chute. 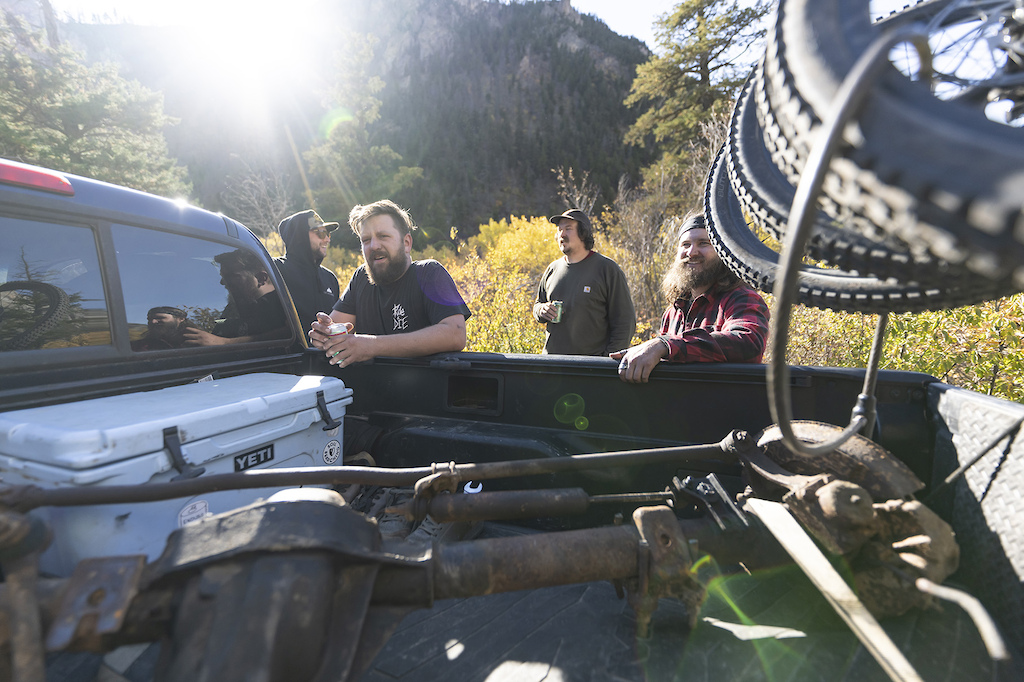 After Graham’s final lap, the crew met at the bottom to celebrate. Everyone had seen what he’d accomplished, and after working independently to capture the moment, the camaraderie was electric. By chance, two old friends happened to be driving the road to catch the action firsthand, and for something that had been kept secret so long, there were no two better pals to witness it. This further fueled the flames of victory and as the chapter of the chute came to a close, Graham’s mind was stirring with his next big adventure, becoming a father.

woofer2609 (Dec 1, 2022 at 7:19)
@Eatsdirt: oh, I'll crush anything darker than night first, but I'm done with most IPA's. Ill take a Sneaky Weasel, which is more like beer flavored soda pop anyday over a Hazy IPA. Hops are an irritant in large amounts. I wish brown and black beers were as prevalent as the yellow swill. I usually brew myself, and the odd thing is that dark beers are no more expensive to brew, but seem to command a premium in retail.

pmhobson (Dec 1, 2022 at 8:46)
@woofer2609: I'm very much over IPAs as well. I think that when you can't mask the mediocrity of your beer with too many hops, you have to actually put effort and time into making a good beer, hence the price.

RBalicious (Nov 30, 2022 at 8:49)
@Planet-26: or possibly picking up discarded rubbish that people have a tendency of loosing in the woods some how?

i-like-toytles (Nov 30, 2022 at 10:44)
Unfortunately this descent didn't officially count due to the presence of a film crew.

luckynugget (Nov 30, 2022 at 21:01)
I remember seeing that line back in 2017 when they first tuned it up. Knew it had to be Aggy. The scale and steepness of that line cannot be shown in video. proper big mtn shit!!

oneheckler (Nov 30, 2022 at 13:20)
Wonderful,beautiful,magnificent,mountain bike is getting fun again to watch ,congratulations. This is almost in the old days when using v-brakes on some steep trails ,brakes on and the bike still going :-)))) ,it saved some real bad crashes comparing it when disk brakes came ,brakes on and the front wheel off :-)))),thanks for the video ,made my day

andypav (Dec 1, 2022 at 8:00)
Aggy has always been one of the OGs with free riding and style. always one of my fav riders to watch

tonybah (Dec 1, 2022 at 8:47)
How did I miss this video?!?! Wow Aggy you are inspiring, such an amazing video and chill vibe. Thanks for getting me pumped this morning. Fantastic video and story. This is exactly the kind of riding, you on a much larger scale, that me and my friends love where I live. Our shoots are much shorter but I can only imagine how you feel at the bottom. You summed it up, “this is living”!!!

I don’t know you but I love you man!

masira (Dec 1, 2022 at 1:09)
Some serious old-school freeride vibes here - love it! Invite Brett Tippie and do a train run down there

kawkaw (Dec 1, 2022 at 9:31)
Man what a refreshing video!! guys like aggy are the real deal in big mountain freeride. reminds me of the new world disorder days

PeruvianMountainRides (Nov 30, 2022 at 15:51)
Should be upgraded to MUST WATCH! This is the REAL FreeRiding!

hdawg6 (Nov 30, 2022 at 17:28)
absolutely insane. extremely well produced this is what mountain biking should be

landen (Nov 30, 2022 at 22:42)
growing up around those parts, the topography doesn't match. marble canyon or near lilllooet maybe?

cpscotti (Nov 30, 2022 at 16:14)
Was I the only one expecting the little Trailforks ad/trail-name overlayed on the video when he dropped in?

WTF-IDK (Dec 1, 2022 at 6:21)
When did skidding the rear tire down the trail become acceptable? Now that trail is going to get washed out fast.

liammullany (Nov 30, 2022 at 10:40)
When a rider drops from the top to the bottom of a mountain in one giant run, it's probably a little bit hard for Mason to be in 150 different places at once.

danturczyn (Dec 2, 2022 at 9:39)
@liammullany: good point and taking multiple photos from the same location would be impossible.