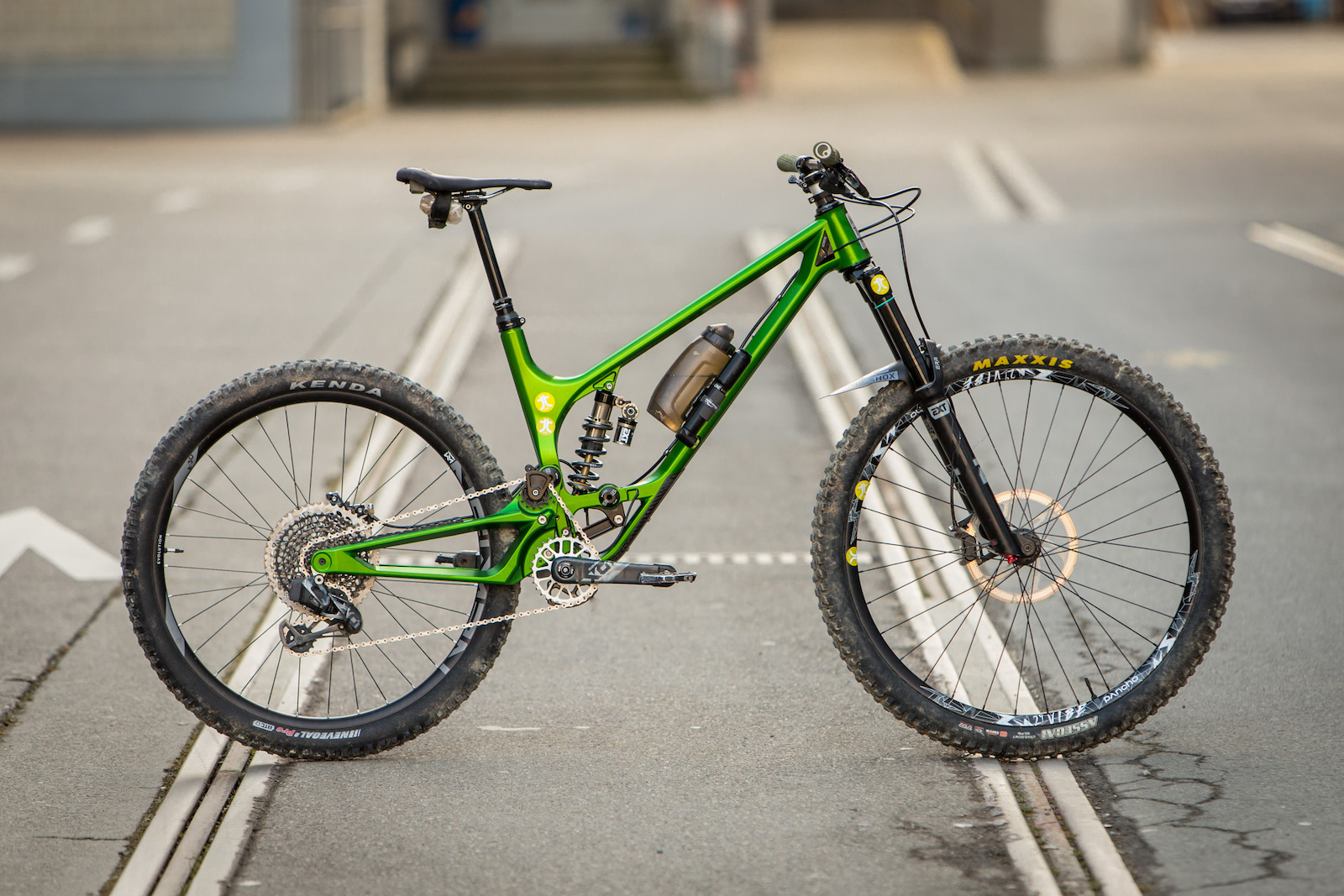 BIKE CHECK
Felix Lüttin's
Actofive P-Train CNC
Photography by The European Bike Project
Earlier this year I had the opportunity to meet Felix, the founder of 612-parts.com. During the day he's a design-engineer for a Swiss manufacturer of electronic actuation systems, and in the evenings he works on his own line of products, including brakes, rotors, chainrings and also a stem, which was more or less just an experiment that turned out very well.

Felix' Actofive P-Train CNC is a test lab on two wheels, as he's constantly working on new parts that he tests on his bike. He sent the first version of the brake caliper to EFBE Test lab for scientific testing, you can find some of the results in a post on his Instagram. The brakes started as a "just for fun" project, as Felix wanted to see whether he could get the parts to work, without having any specific experience in brake / hydraulic engineering. Over time, he learned more and more about brakes. The combination of constantly building knowledge and the experience from his daytime job allowed him to build a set of prototypes that actually worked.

As the name suggests, the Actofive frame is completely CNC machined, which gives it a unique look and allows Actofive to make small changes to the design between different versions. 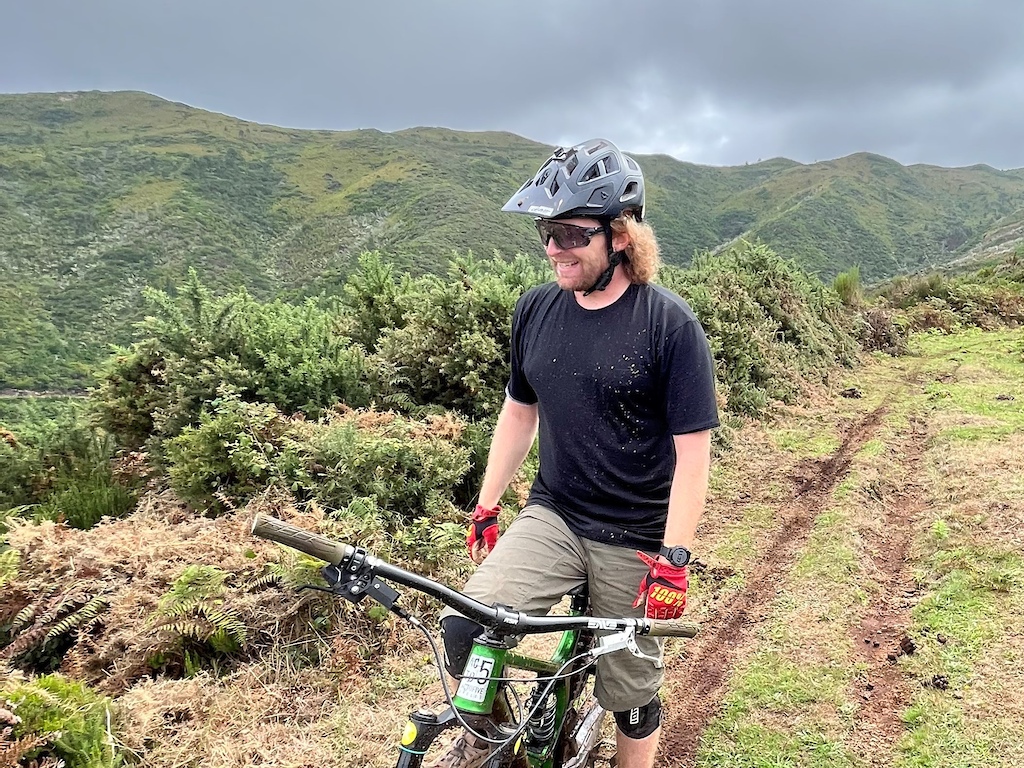 Rider Name: Felix Lüttin
Hometown: Luzern, Switzerland
Height: 178 cm
Weight: 75 kg
Instagram: @612_parts
Suspension duties are managed by an EXT Era fork and an EXT Storia shock. Felix runs 60 psi in the + chamber and 95 psi in the ++ chamber of the fork. In the rear he's currently using a 475 lbs spring.

Felix uses aluminum rims which are laced to Onyx Racing Vesper hubs. He says that the silent freewheeling and instant engagement are out of this world and he wouldn't want any other hubs. The combination of the hub and a 3D printed chainstay protector that the made himself results in a very silent bike. 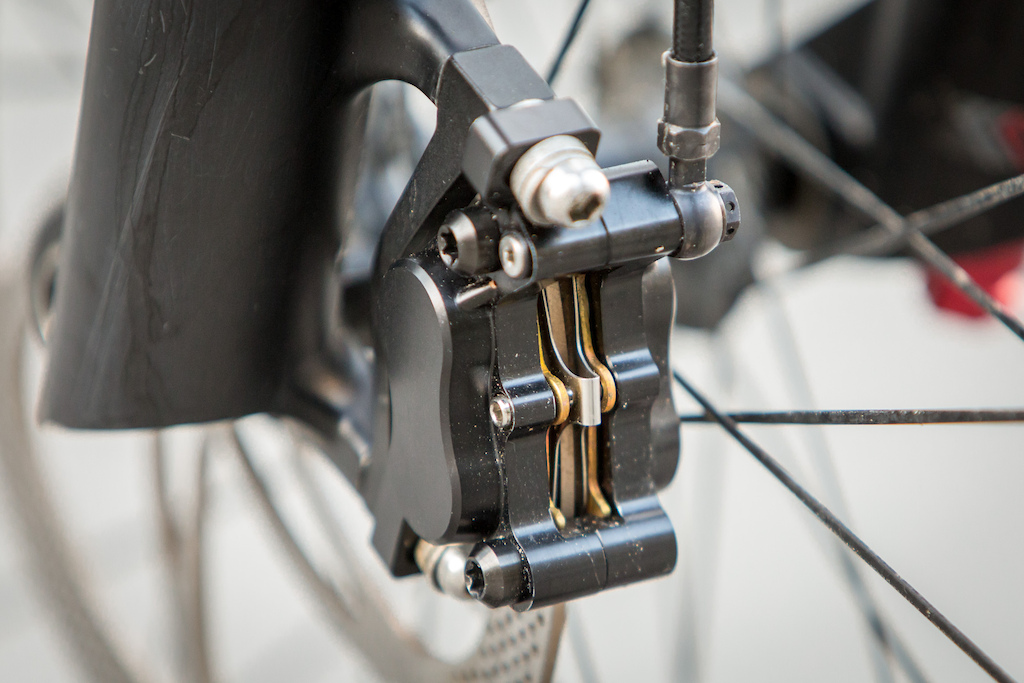 When we took the photos, Felix was testing this brake caliper. Today, the design looks totally different, while the internals are still the same.
When we met to take the photos, Felix was running one of his own brake calipers in the front, which was paired with a SRAM Code brake lever. However, in the meantime he's worked a lot on his own brakes and the newest version looks very different. He's also running his own rotors, which use the more and more common pattern with hundreds of small holes.

The drivetrain is basically a SRAM 12-speed Eagle setup, however Felix runs his own chainring. He also designed the stem and made the carbon downtube protector himself.

A Bikeyoke dropper post and an SQlab saddle are Felix's choice when it comes to comfort and reliability.

The cockpit is held together by an Enve riser bar that Felix has used on several bikes over a period of four years. The bar took a lot of beating and has several battlemarks, but Felix says he's not planning to change it anytime soon. 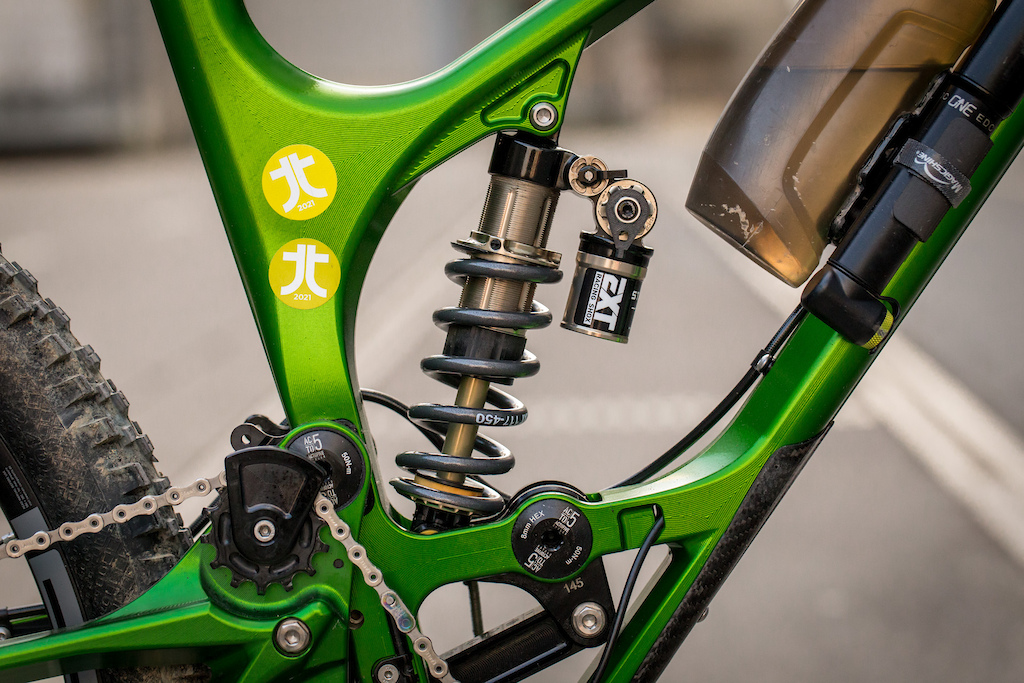 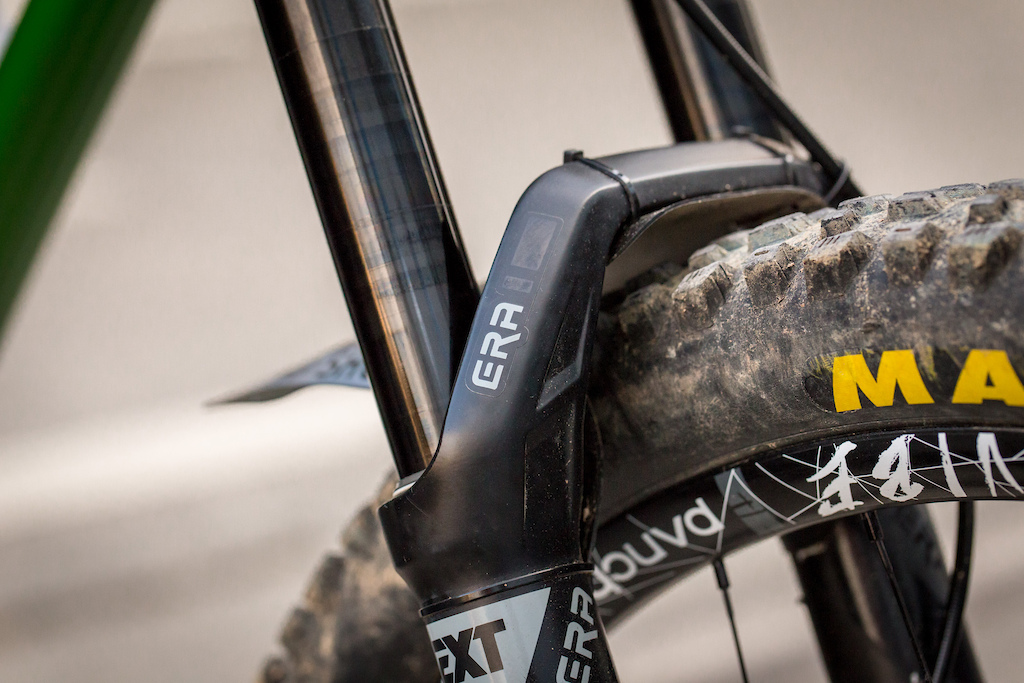 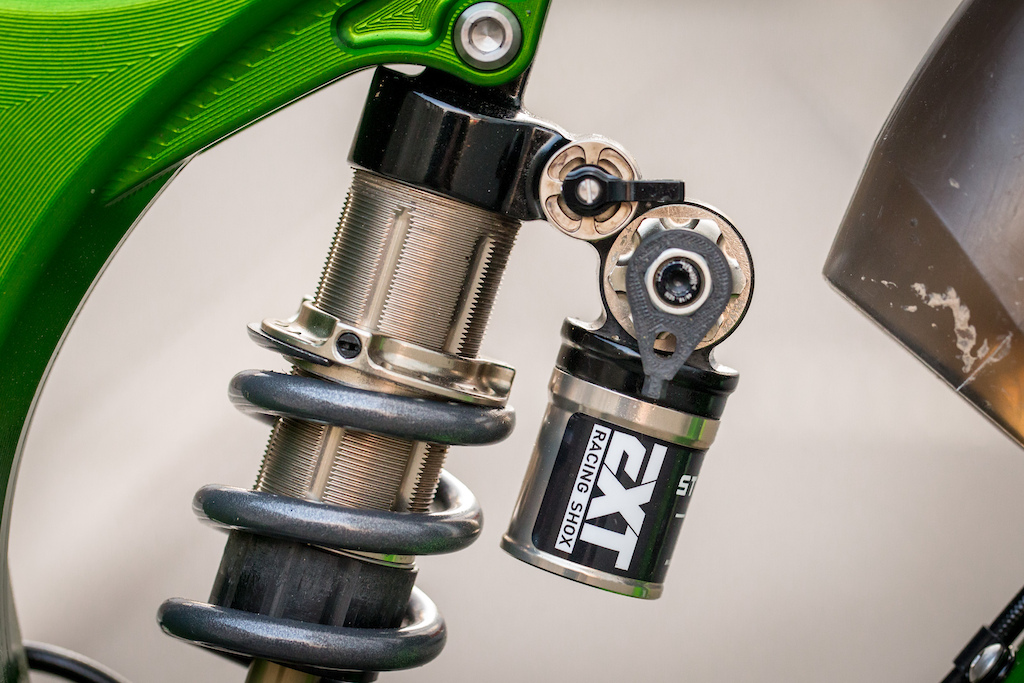 Felix runs a EXT Era fork and Storia shock. He uses a 3D printed adjuster tool for the shock, as you usually need a 12 mm spanner and 4 mm allen key to adjust the Storia. 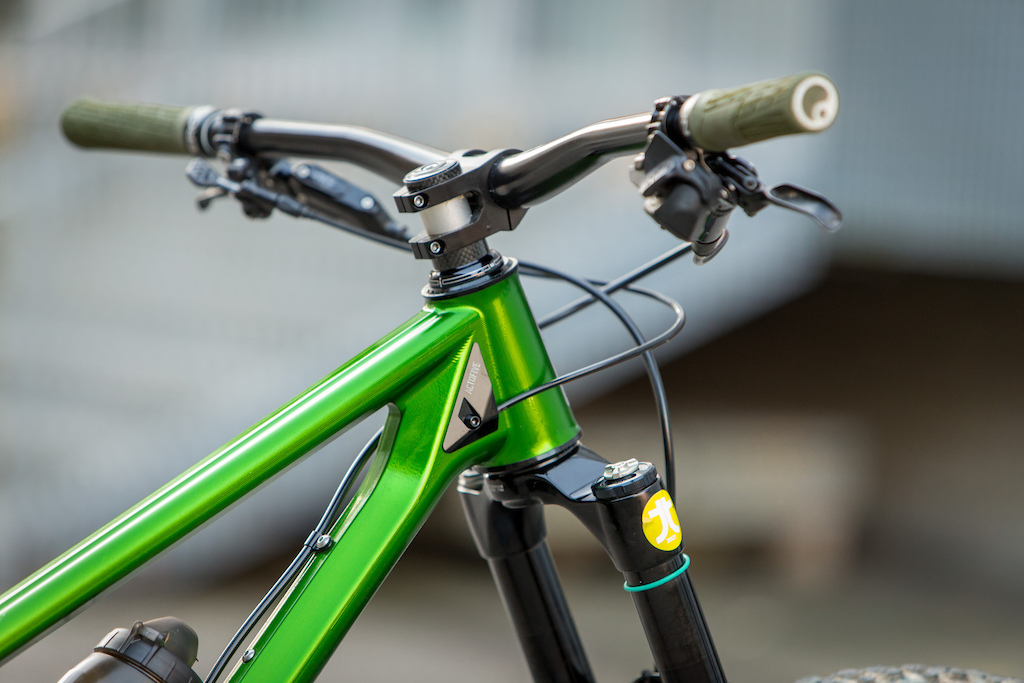 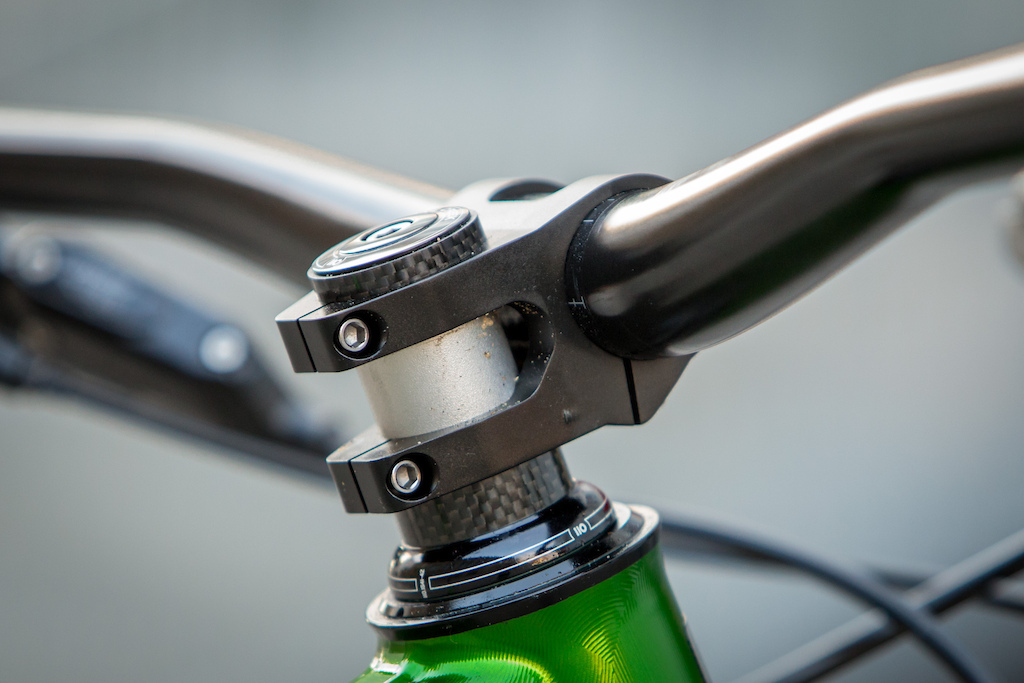 Felix is currently working on a stem that uses two bolts to clamp the handlebar. 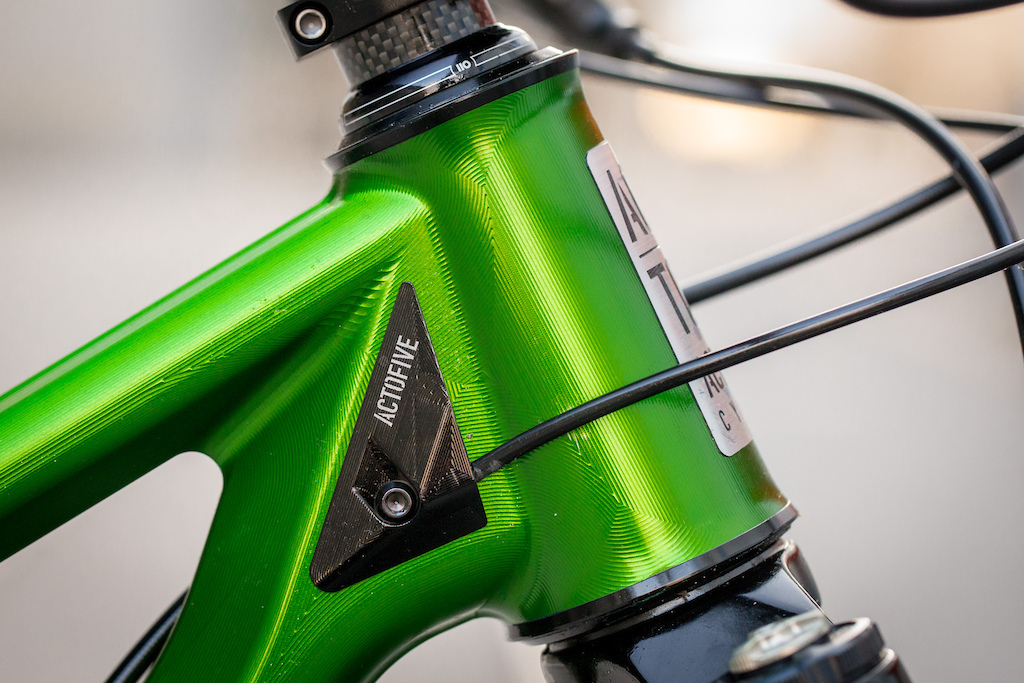 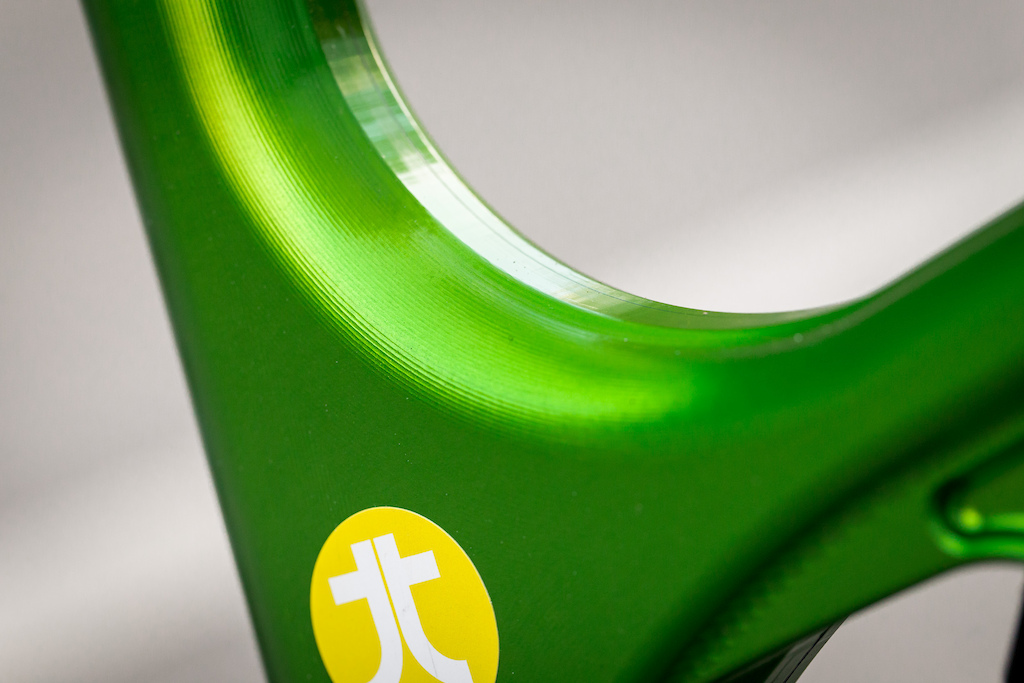 Unique shapes on the CNC machined and green anodized frame. 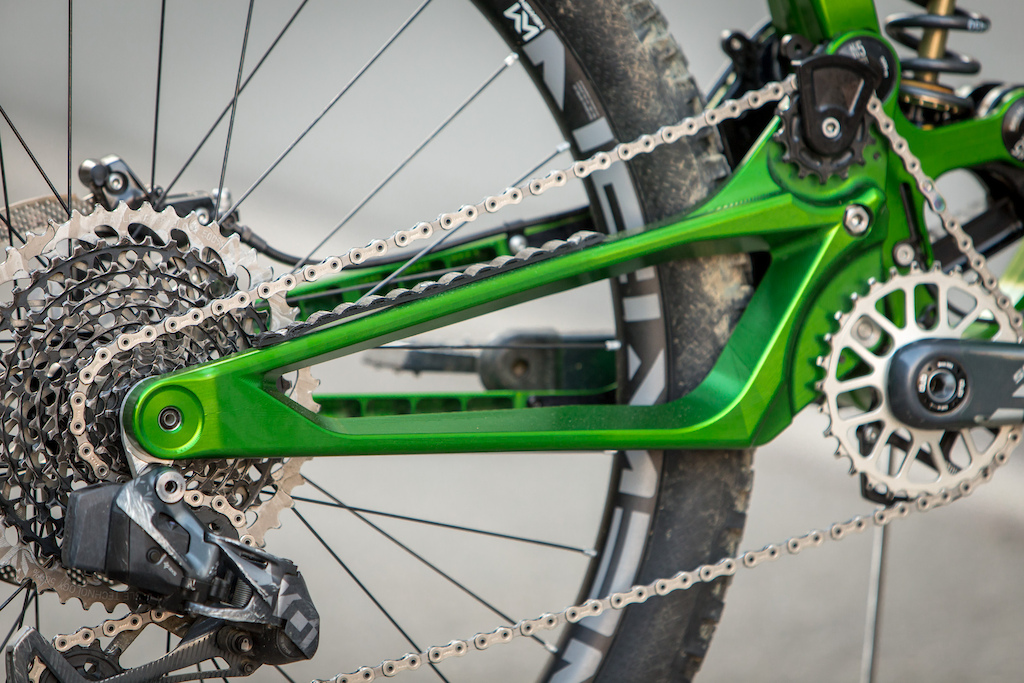 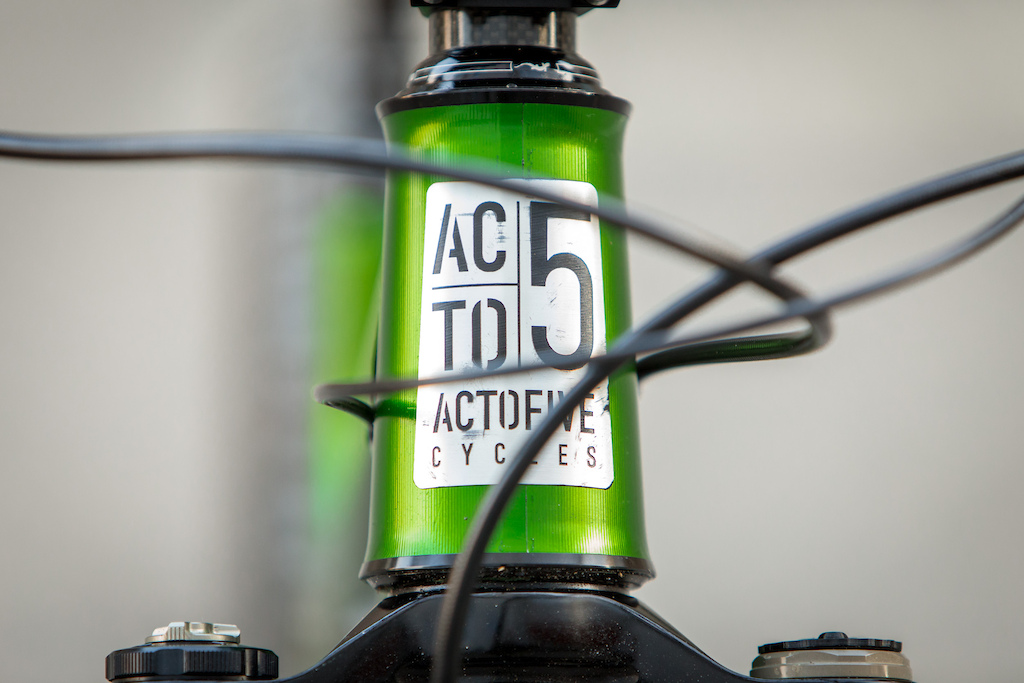 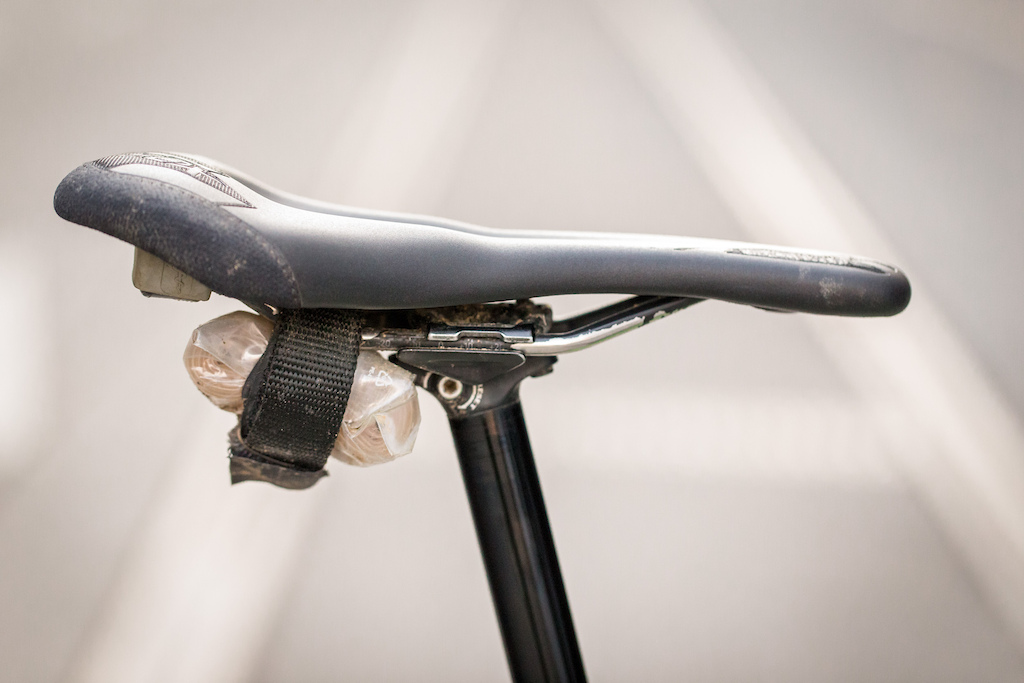 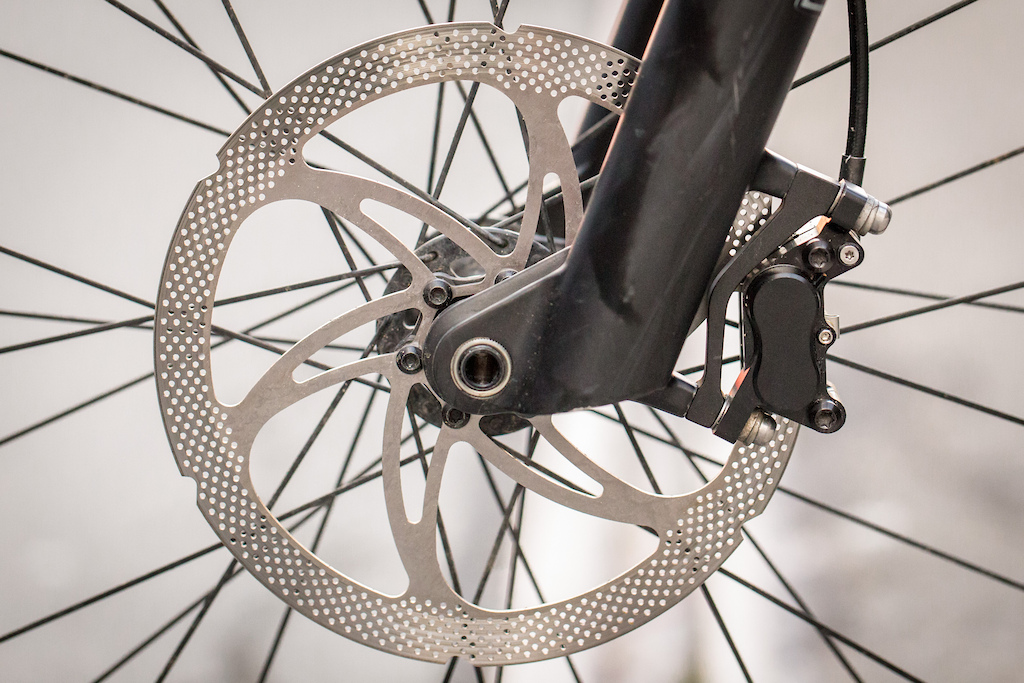 Race ready: Felix does several enduro races each year and got his bike dialled in. 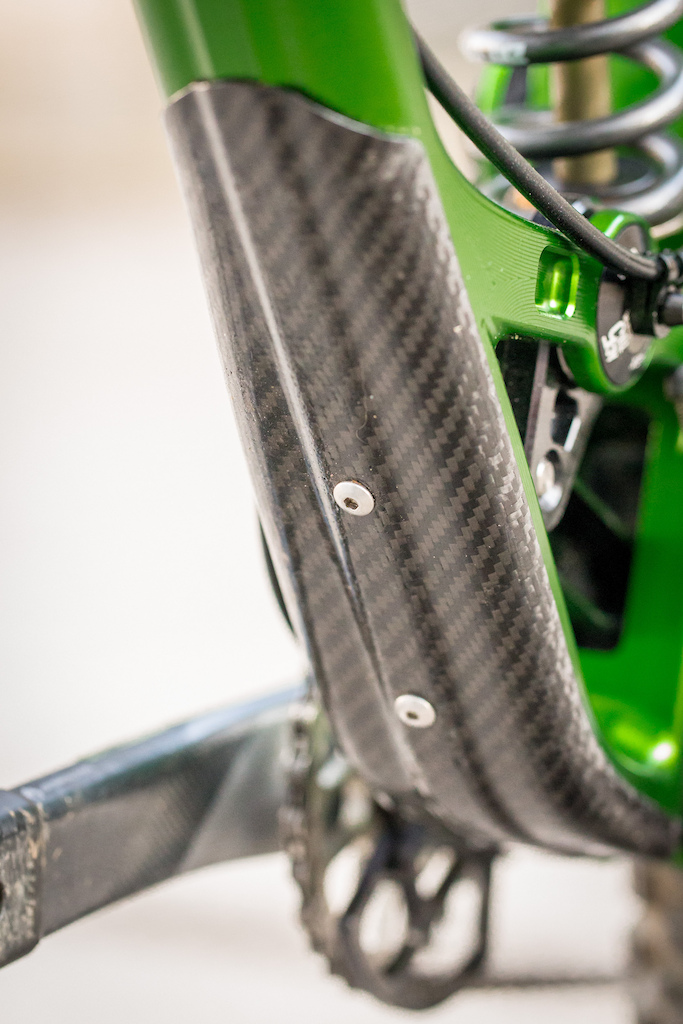 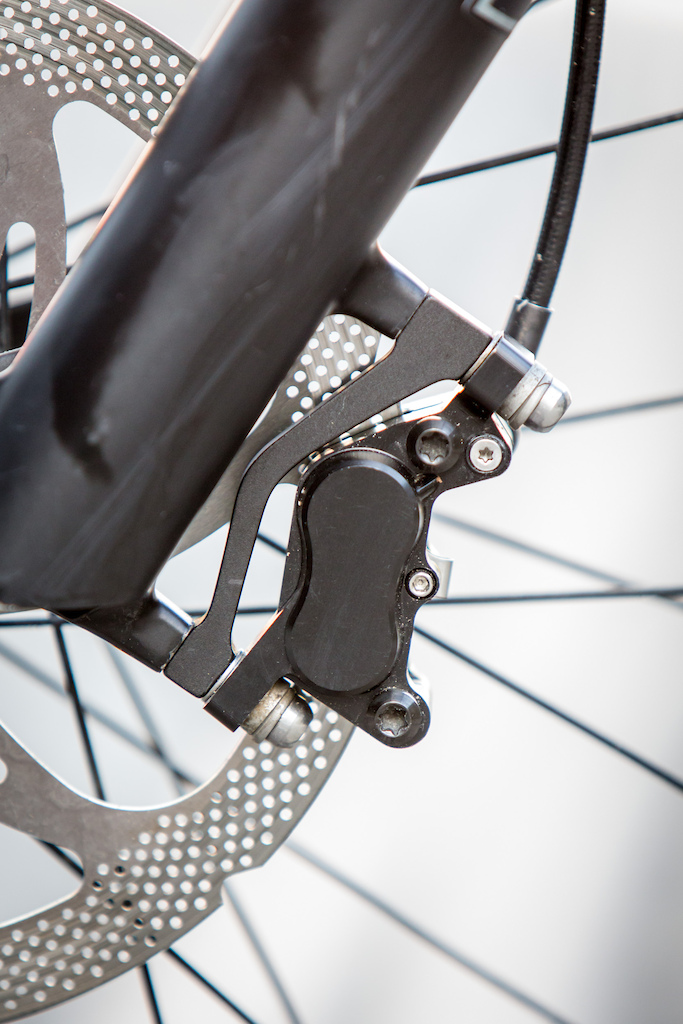 A custom made carbon downtube protector and an early stage brake prototype. 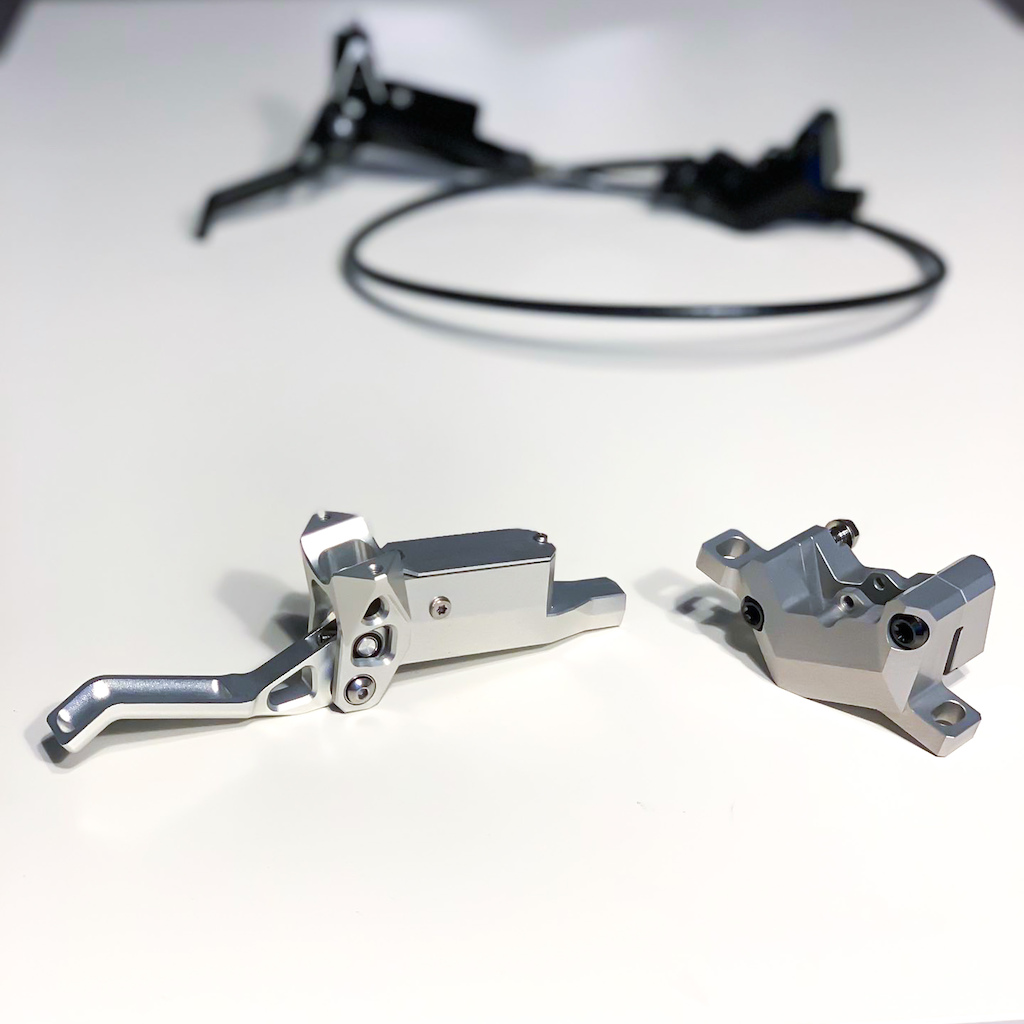 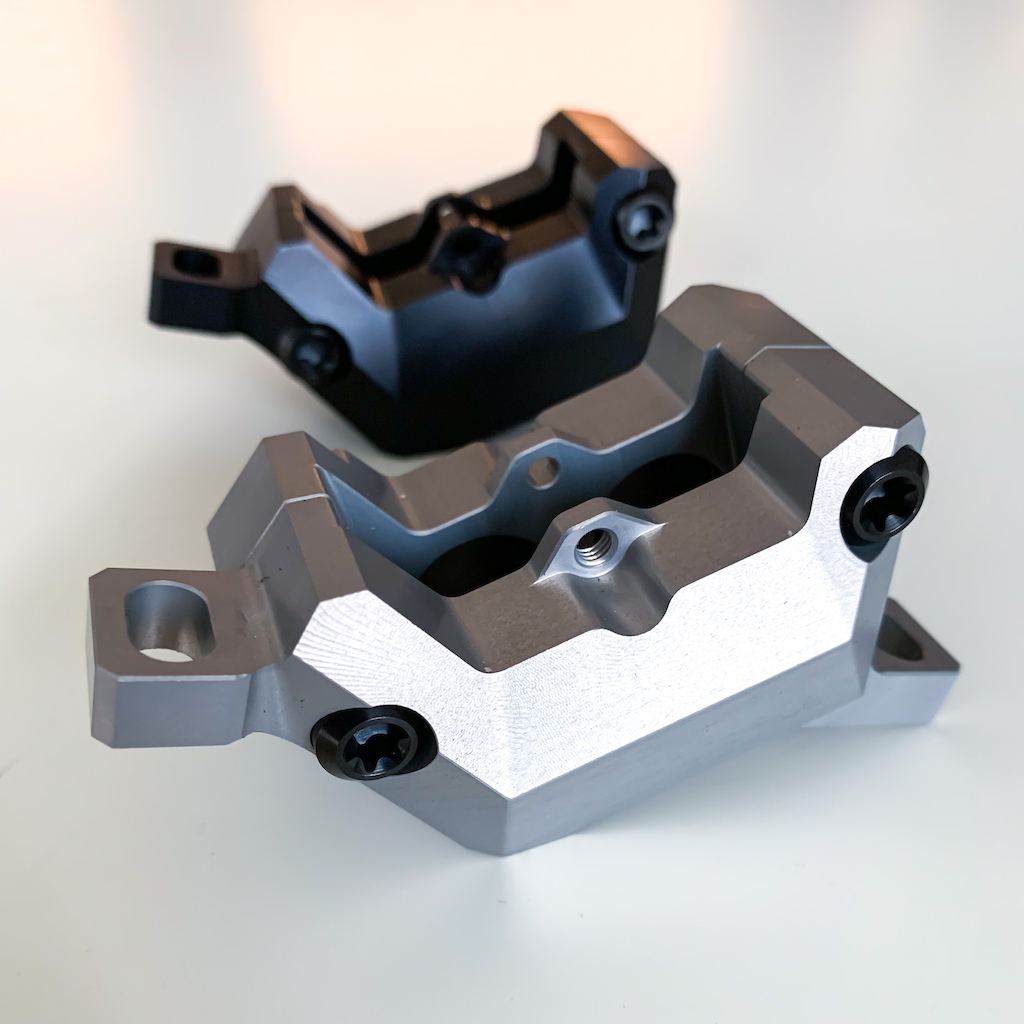 The newest version of the brakes that Felix designed looks very different compared to the first version.

Tech Week 2023 is a chance to get up to speed on the latest mountain bike components, apparel, and accessories. Click here to view all of the related content.

i-like-toytles (Oct 17, 2022 at 11:33)
@nickfranko: Honestly I just couldn't come to grips with the fact he was faster than me. It was leaving my spirits deflated almost every ride we went on. And to make things worse, I wanted to try the same tire combo but inflation has me on a spending freeze.

DavidGuerra (Oct 17, 2022 at 14:50)
@vinay: Identical front and rear can work fine if you don't need a faster rolling tire at the back. Common examples would be Assegai, DHR, Magic Mary. Regarding brands, it depends. Aesthetics aside, one might want similar side knobs for a more consistent feel. But even the extremely popular DHR/Assegai combo doesn't have the exact same side knobs.

i-like-toytles (Oct 17, 2022 at 15:26)
@vinay: tire brands are incompatible with one-another. There have been multiple lab tests done showing drastic changes in rolling and cornering performance when a tire was mixed with a competing brand. The effects are primarily psychosomatic and only occur for people who ride better when their bike looks good.

vinay (Oct 17, 2022 at 14:51)
@Tambo: Yeah I recall they were unique when casting frames but I wasn't aware that the machined ones were welded too. I thought they were just machined on the outside, so all the ribbing/stiffening was there (and there was no internal cavity).

I still think welding/brazing frames from tubes is pretty clever from a structural/weight point of view.

wrc21 (Oct 17, 2022 at 18:38)
@vinay: I was literally working on my Empire AP1 which I haven't ridden since I'm still restoring it. It is seriously impressively (over) engineered, the rear swingarm is a scaled down dirt bike swingarm. 6.1kg too :/

stiingya (Oct 17, 2022 at 19:09)
Agree, that is one NICE looking bike!! But 37lbs for a Medium is kinda ouchy for the level of parts/cost and travel going on there... not that weight matters anymore because I'm hip to trendz...

Pinemtn (Oct 17, 2022 at 22:36)
Damn what a sweet looking bike. I feel like it’d probably have a rough resale in the future if that’s a do consideration. I like to update my bikes often.

sewer-rat (Oct 18, 2022 at 0:00)
@Tambo: partially correct, the original MX6 had a one piece machined swing arm, however the cost and time to produce this turned a lot of potential buyers off so Chris released the MX6 Evo with cast swing arm and seat sections

Bunabe (Oct 19, 2022 at 5:29)
Pole is going for actual performance which they've been delivering close to a decade now.

OnTheRivet (Oct 17, 2022 at 21:48)
Something weird going on as he is using old school SRAM spherical washers on the outside and the bolt heads don't appear perpendicular to the face of the brake mounting surface.

DavidGuerra (Oct 17, 2022 at 11:08)
That's a pretty quirky headtube, resembling a conical head tube soldered to a monocoque frame or hydroformed tubes, when the manufacturing process allowed a seamless carbon fiber-like headtube-frame transition. It does look cool, even if it doesn't offer the most optimal weight/strenght ratio.

eshew (Oct 17, 2022 at 12:35)
Always use plastic bolts on the downtube... Rock impacts can hammer in them bolts. It's better to have a plastic bolt deform than a steel bolt get hammered into the frame causing a dent.

tbmaddux (Oct 17, 2022 at 16:18)
Did nobody else notice how the front and rear hubs (and almost the cranks) line up with the street markings, especially in the thumbnail on the main page? It was enough to make me wonder if it was some kind of dynamic wheelbase-tracking stringpot.

FeLuetti (Oct 17, 2022 at 22:02)
When you use the correct PM-Adaptor, you can skip the washer. The ones I used back then are 20mm PMs for 200mm Rotors on 203mm Rotors.
But if this already bothers you, better not take a look at the BB and Spindle dimensions/configuration on the crankset.

Bikelo (Oct 17, 2022 at 18:48)
Hey felix. Awesome design on the new brakes. I think the disc will stop turning in fear of being crushed by these calipers. Hope to be riding with my old neighbour / coworker soon again. Cheers!

homerjm (Oct 18, 2022 at 15:49)
I like the brake caliper,it looks great. Not much info in the web site about it and it is little expensive. But I would love to try one with and XT lever just to compare to other brake combo (Saint lever+Hope rx4+) I have in my bike. I have done some research and SRAM levers are not very compatible between them,just the opposite to Shimano,just take any lever and any caliper it would work just fine,just curious about same caliper being SRAM/Shimano compatible. I would like to know more details.

FeLuetti (Oct 18, 2022 at 22:14)
Hey, send me an E-Mail and I can give you all the information you want to know. Maybe I can make a more precise description on the website then.

homerjm (Oct 19, 2022 at 4:27)
@FeLuetti: I think it is "mandatory" to have a good technical description of the product,even the manuals. What about the complete brake system? The bike looks awesome too!

HardtailHerold (Oct 17, 2022 at 12:17)
The original calipers looked like every cheap caliper on AliExpress. After changing the design they looked a lot better

Neil6 (Oct 18, 2022 at 1:20)
Anodised frames need to make a comeback, beautiful and weight saving finish, not that the latter seems to be a priority, but painting it would be a sin.

Very intrigued by EXT forks - worth the upgrade from factory 36?

stormracing (Oct 17, 2022 at 11:11)
Definitely a Yes compared to stock 36 But 36 with Avy Hybrid set up would be hard to beat and still come out lower in cost than the ERA. I have both and torn between the two

slimboyjim (Oct 17, 2022 at 14:00)
I have an era v1. Its an awesome fork. However it was complex to set up - I ended up asking for help from mojo after struggling (the distributors here in the UK). There's a lot of variables that you can change.
Mojo were awesome and I'm very happy with the results though - the forks are sensitive whilst supportive through the midstroke. I'm a big fan.
Other stuff might be just as good (Avy, Runt, Formula, Vorsprung, etc) but I've got Mojo close to me and I liked the Era when I tried it...

mechatronicjf (Oct 17, 2022 at 11:37)
Those levers are going to look real slick if they keep that reservoir design

KalkhoffKiller (Oct 17, 2022 at 13:49)
Don't really get the comment about the freeride bike and the travel when this weighs almost as much as a light dh bike.

FeLuetti (Oct 17, 2022 at 22:29)
These stickers are from the Trail Trophy race series I competed in, to track whether the frame/wheels/forks were exchanged during the race.

zoobab2 (Oct 18, 2022 at 8:49)
Publish the CADdesign of the brakes under an open source license, so that we can have open components!

A cheap CNC milling machine in the basement?

spinzillathespacelizard (Oct 18, 2022 at 12:05)
Suspension syndicate has them

gtollette (Oct 17, 2022 at 12:50)
highly suspect lever angle. but the products look interesting.
Are the mis-match tires part of the experiment?

The tires were an experiment with not the best outcome…

The brake levers are rotated downwards In my opinion, which will advance the riders body position forward. For me, this can add instability at high speeds, that being said brake lever position is completely subjective and therefore I should really hold me tongue.

The design of the levers themselves are beautiful and minimal, would love to see a cross-section.

FeLuetti (Oct 17, 2022 at 13:27)
@gtollette: I see.
Well, the angles change from crash to crash, looks like I had a big crash, judging by the photos.
I don’t really go fast on my bike: ‚look pro go slow‘
Would be a shame if the brakes were there for nothing.

FeLuetti (Oct 17, 2022 at 13:20)
I accept your offer to send me some WeAreOne rims! Finally my Parts-Bin build gets some fancy wheels!