For today’s comic, I decided to treat y’all by making the pictures move.

Over the years I have been blessed to ride with a number of the world’s most amazing bike riders. They tend to have very different takes on riding and what they are trying to accomplish, but one thing they seem to have in common is a drive to test their resolve. Their skills have reached such a high level that I think the real challenge for them is being able to follow through with what their mind knows they are capable of.

They have an ability to clear their minds of fear and self-doubt, which allows them to consistently perform at a level the rest of us might only touch once in a blue moon.

It isn’t just some gift they are born with, they work for it, and they work hard. When there’s something they want to do and the voice inside tells them that they can (probably) do it, they focus everything on making it happen. The legendary Jay Miron stands above the rest at this skill, so this silly cartoon is intended to be a tribute to his determination and something we can all hopefully find inspiration in. 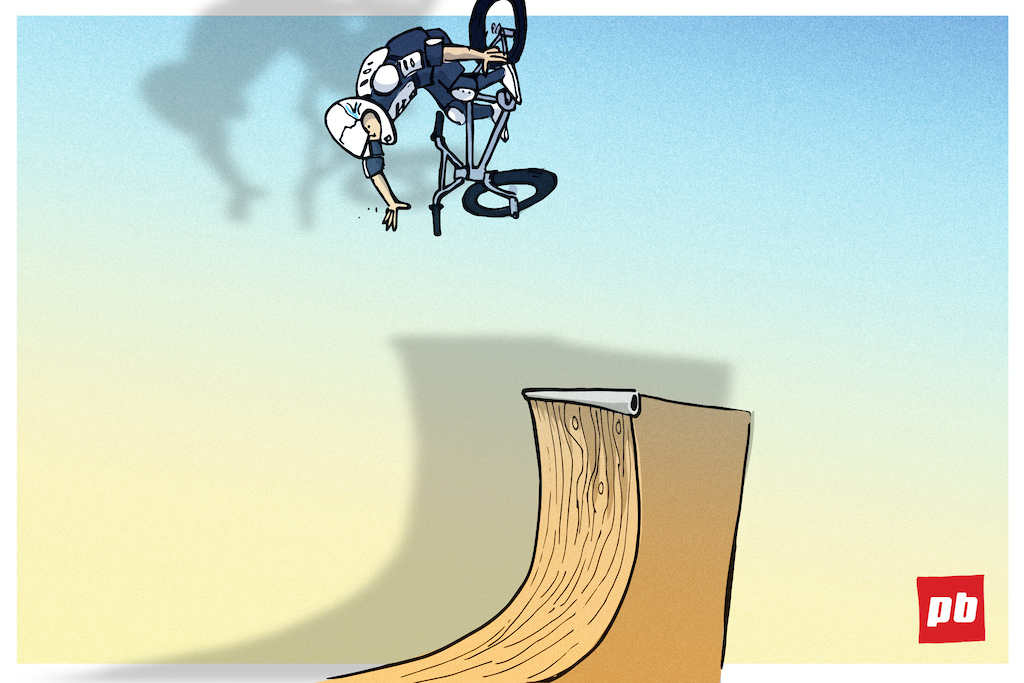 If you don’t know about Jay, there's simply not enough time in the day for me to tell you about all the groundbreaking things he did on a bike. First double flips in '97, first flip over a spine while we were doing shows for GT in like ‘92 (inside Twelve Oaks mall in Novi, Michigan). He did some 360 tailwhips in Chicago during that tour and they were certainly the first I’d ever seen. Oh yeah, curved wall rides on that trip too!

Well, I don’t trust my abilities as a historian too much, but Jay never stopped progressing during his long career (540 tail whips were bonkers!). Suffice to say that many of the limits of what is possible on a bike were pushed by Jay. His influence and impact have trickled down through the years to all of bike riding.

More than firsts though, what always struck me about Jay was his determination. It was more clear to see in his riding than anyone I’ve ever seen touch a bike. When he put his mind to something you could see and feel the intensity.

grampa (Dec 22, 2019 at 6:20)
Thanks, Taj. The world of cycling really should know the basics of BMX history and the influential riders. None of them more deserving of recognition than Jay. The worlds of BMX and Slopestyle would not be the same without the immense push to progress from a couple handfuls of bmxers in the early '90s.

LittleDominic (Dec 22, 2019 at 19:38)
The amazing thing about this influential group of BMX riders around that time period is that there was almost no money in it. This was post 80’s and pre X Games and I don’t think even the top riders were making much. So all that progression was done mainly for the love of it.

grampa (Dec 24, 2019 at 8:31)
@LittleDominic: Totally agree. To the outside world, BMX was dead. Within BMX, the community was never stronger, contests never more insane and all that while nobody made any money. I rode in one of the BS contests during this, "BMX is dead" period, and with Jay a couple other times. It truly was proof that what motivated these riders wasn't fame, wasn't money, it was just to push their own limits and to one-up the next guy in a friendly but fierce competition.

rideonjon (Dec 22, 2019 at 5:17)
I remember meeting Jay at Lucky trails in Burnaby,he encouraged me to hit the large set at Lucky. I front wheel cased it and landed on my head. Got up and immediately knew could do it. Thanks Jay.

tripleultrasuperboostplusplus (Dec 22, 2019 at 8:21)
Somehow, these stories are NOT inspiring me as much as they are probably intended to.

WAKIdesigns (Dec 22, 2019 at 10:43)
@tripleultrasuperboostplusplus: Fear fuels doubt and doubt is like a heavy software running in the background, stealing your computing power making you tense and inefficient... and often making you crash. There is lots of goo to be said about fear and doubt, they have an extremely important function, but when you show up with a plan to hit something, then you better leave them at home.

englertracing (Dec 22, 2019 at 11:59)
@tripleultrasuperboostplusplus: you probably ride xc in spandex

kermode (Dec 22, 2019 at 8:57)
I remember seeing Jay drop in at a skatepark and nose wheelie around the box jump to get to his gear bag. Unreal bike control. He was one of, if not the best all around riders of all time. Vert, street, park, flat. At the 1990 2hip King of Vert Jay was still relatively unknown and woke up after sleeping in his car and hits a double peg grind on a hand rail that was on top of the box jump first try.

englertracing (Jan 7, 2020 at 20:18)
@kermode: well park and street scotty would slaughter jay, also re flat, scotty could 360 tailwhip bunnyhop. who does that?
the only negative with scotty was he was super robotic and not smooth, pretty much polar opposites of chase hawlk who does minimal tricks and goes HUGE HUGE with such style and grace.

englertracing (Jan 7, 2020 at 20:23)
@kermode: another all round monster is danny mckaskill he can do what the others can do, but they cant do what he does.

kermode (Jan 8, 2020 at 12:41)
@englertracing: you’re comparing different eras in bmx. Jay was a beast, actually the Canadian Beast. Scotty was a beast as well. Of course Scotty is going to appear to be better because he came after guys like Jay. Jay did the first double back flip, 360 tailwhip, 540 tailwhip, the list could go on. He’s won vert, Park, and dirt contests. He’s competed in pro flat and was an awesome street rider. Scotty’s a great rider, one of the best at street and park, but never competed in vert or flat. I don’t even know why you’re arguing this. I said Jay was one of the best ALL AROUND riders of all time.

englertracing (Jan 8, 2020 at 23:18)
@kermode: we agree to disagree. The reason is... You and I are from different eras, your probably closer to jays age, im closer to scotty. Vert died in the late 2000s, flatland the 90s... So i guess my calculations omit them while yours include them.

greatstrutt (Dec 22, 2019 at 14:59)
I love how Taj says, ‘Jerry Galley was there’ and leaves it hanging for a second. That guy was like a mythical creature , many people claim to have seen him ride but few ever actually did. I saw him at ride at KOC ‘99 along with Rooftop and Nate Wessel. Unless it was a dream??

nojzilla (Dec 23, 2019 at 0:01)
Dude was a GOD.
We used to ride Liegh on Sea skate park in the mid 90's, a rickety wood with metal surface park. Thre was a scary, huge,12ft bacon slicer of a vert ramp (where the metal surface panels didn't line up and flexed so if you crashed you could get sliced like bacon) When riders aired,you could feel the whole ramp flex even when on the other deck. Something insane like 2ft of vert! I dropped in once... that was it never again!!!
One day. Gerry Galley (Jelly Garry) shows up with King bikes/bicycle union crew an rides up to the vert.
Drops in.. within a few pumps He's built up to 6ft out, 8 ft out 10ft out!!!
SMOOTH AS SILK. Landing in the vert on re'entry Every pump, silent ,effortless. Only the slightest d'dum on the coping
One of the most Beautifull things I've ever witnessed in real life.
Straight outta the van, no warm up
He stops, rides off the ramp an says
"Suppose I better put some pads on"

Also, really nice guy. Came and took me for breakfast a hangout while I was in rehab for a broken back, relearning how to walk.

BMcP (Dec 22, 2019 at 13:23)
Love Jay and all the pioneers! Jay sponsored me through his distribution co. so I’ll be forever grateful to him for that!
But, I always put Taj in the same camp. I remember watching him (on video) pull the first 1 handed tail whip!! That seemed to take the same kind over strength of will as this video of Jay describes!
Looking forward to more from Taj!

Fatboy666 (Dec 23, 2019 at 6:22)
Jay did a demo at the bike shop I worked at many years ago. The boss asked my band to play while the Schwinn Team did their stuff. At one point I grabbed Jay and concocted a show stopper - while soloing during Jerry Was A Race Car Driver, Jay did a back flip over me. Somewhere there is a VHS tape........probably stuck in someone's VCR in a basement. It was colossally badass!!

used-couch-salesman (Dec 23, 2019 at 14:03)
Jay makes amazing furniture now. He's a very talented woodworker. It makes you wonder about the CTE issue and if it's partly random. Surely he took just as many hits as Mirra but he survived and is thriving.

brianpark Mod Plus (Dec 23, 2019 at 15:07)
Whelp, I guess I know what I need to start saving for. Childhood me requires a Jay Miron original chair.

bermdweller (Dec 22, 2019 at 18:30)
This was so cool to watch, thanks for this - I made sure my 12 year old son and 9 year daughter were beside me when watching to ensure the passage of knowledge on stuff like this - life lessons / stoke and awesomeness all rolled into one.....

NinetySixBikes (Dec 23, 2019 at 4:56)
One of the last true ATV's of BMX. Just like DMC, he was a very accomplished flatland rider and competed in dirt, street and vert. Watched his parts in Madd Matt and Schwinn American Muscle religiously. 20+ years later, his riding still resonates through. Some of his vert runs in the Xgames, would still hold up in today's finals.

Royston (Dec 22, 2019 at 7:10)
Jay Miron was far and away my most favourite BMX rider growing up. His style and amplitude was awesome....BEAST

jjwillTOmaui (Dec 22, 2019 at 13:01)
Honestly, I think stuff like this should be band forever showing up on pb. There's not one part of what Jay miron represents to BMX that will ever be captured in the lameness this website continues to push out.