Feb 21, 2020 at 16:22
by Taj Mihelich
Tweet
Well, it has been a year of Sunday Comics! Since this is the last one of my weekly series I thought I would revisit some of my favorites and add some new frames to them. This won't be the last you hear of me on Pinkbike, but the weekly comic was just something we wanted to see if I could pull off for a year. You all have put up with enough and I greatly appreciate it!

I'll keep working with Pinkbike on other projects and comics. They just had me illustrate an upcoming article on anti-squat (which isn't like I thought, one of those things that women use to pee standing up at music festivals). I'm also secretly working on more animation projects.

For now, and for your entertainment, here are some comics.

The first one was back in August here, and the other one was just a few weeks ago here. Some new ones below. 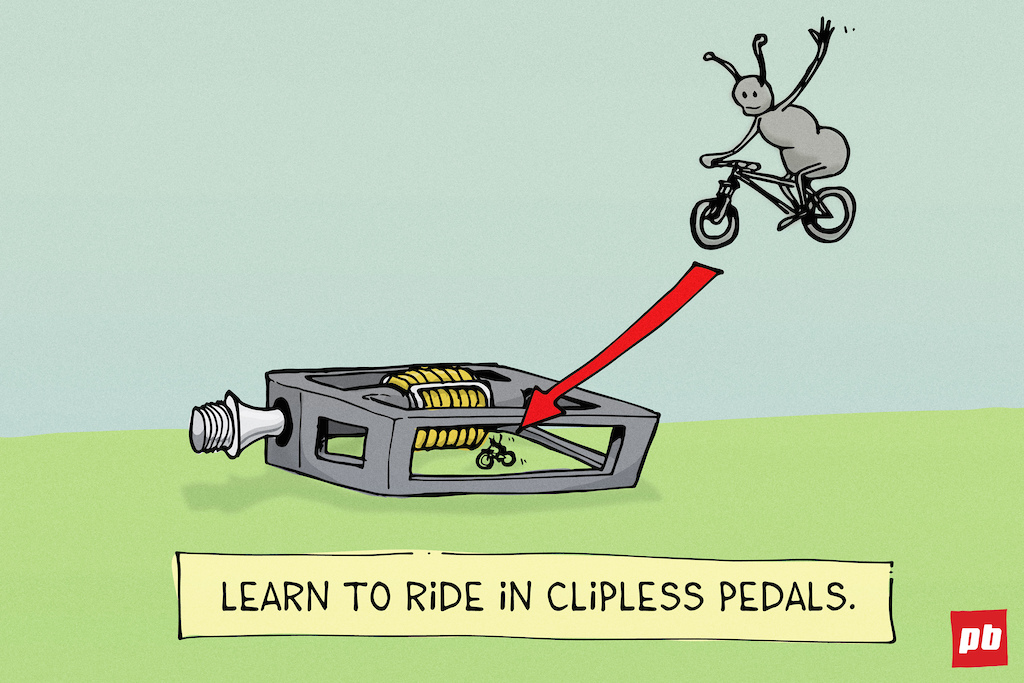 Personally this advice never worked for me, but a lot riders better than me suggest it. 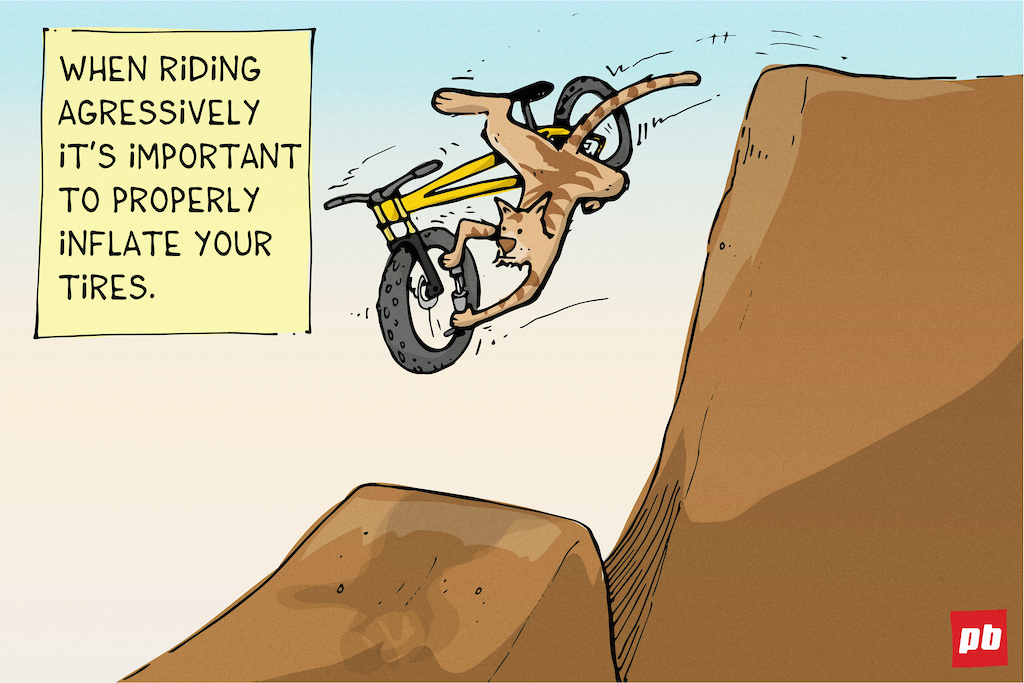 Another bit of bicycle wisdom. Air up to air up!

The "PinkBike Riders" was one of my absolute favorites but it was also kind of embarrassing. I felt like I had the best idea ever. I worked manically at rushing out the drawings in time for a comic, and only at the time of posting realized I was referencing a trading card series that was popular 35 years ago! Nice and timely. Here's a few new ones anyway. 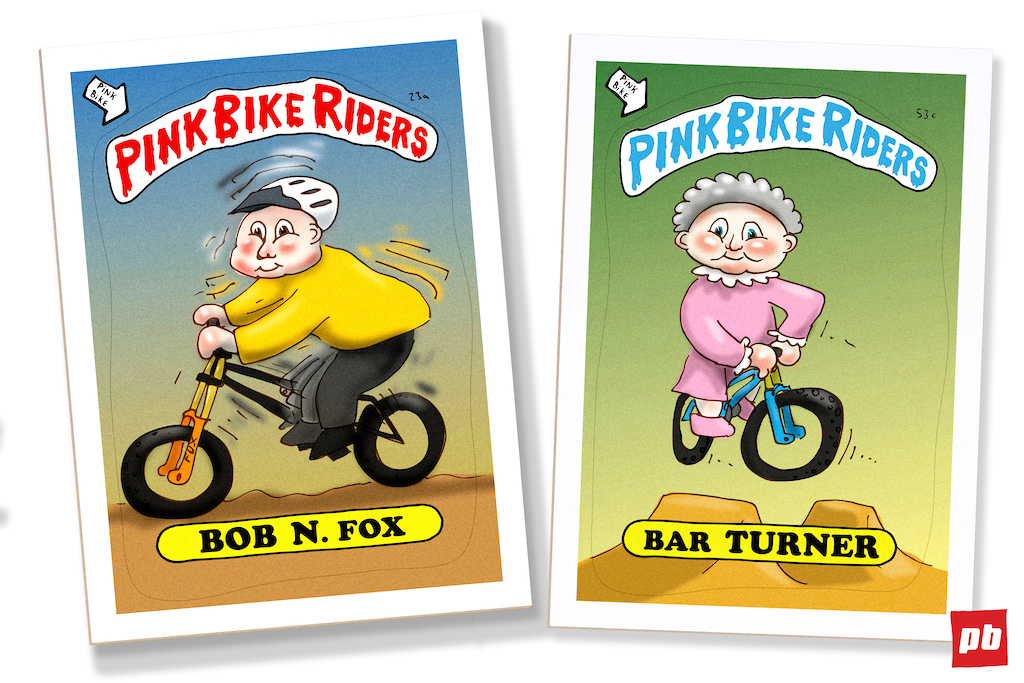 Not so Clever Multi-Tools had me laughing while I was drawing it. If you were curious how truly bad my sense of humor actually is I giggled to myself for days at "Torx Sword" and I really couldn't tell you why. 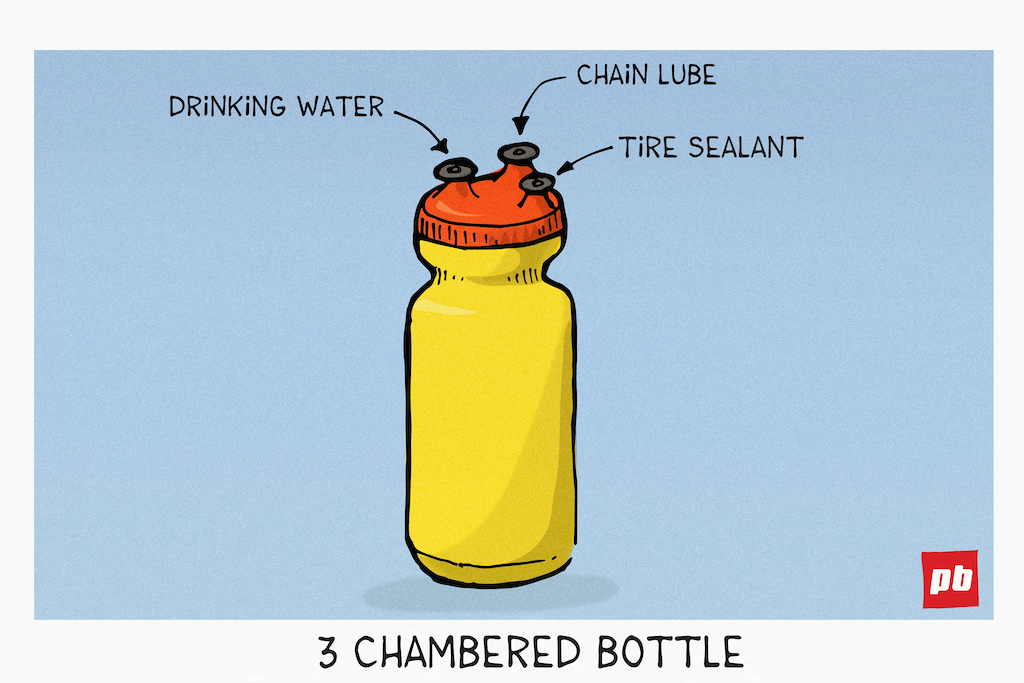 This isn't actually a multi-tool, I know, but I like the idea of someone wanting to carry not only water, but other important mountain bike fluids with them (and somehow being in a situation where they could mix them up.

I collect old cycling books. They are an interesting way to see history and an often funny little window into a world I've always loved (the bikes part that is). Some of them offer what seems now comical advice so I did a comic last year in May illustrating quotes from the books called Advice From Old Cycling Books. Here's a new illustrated quote below. 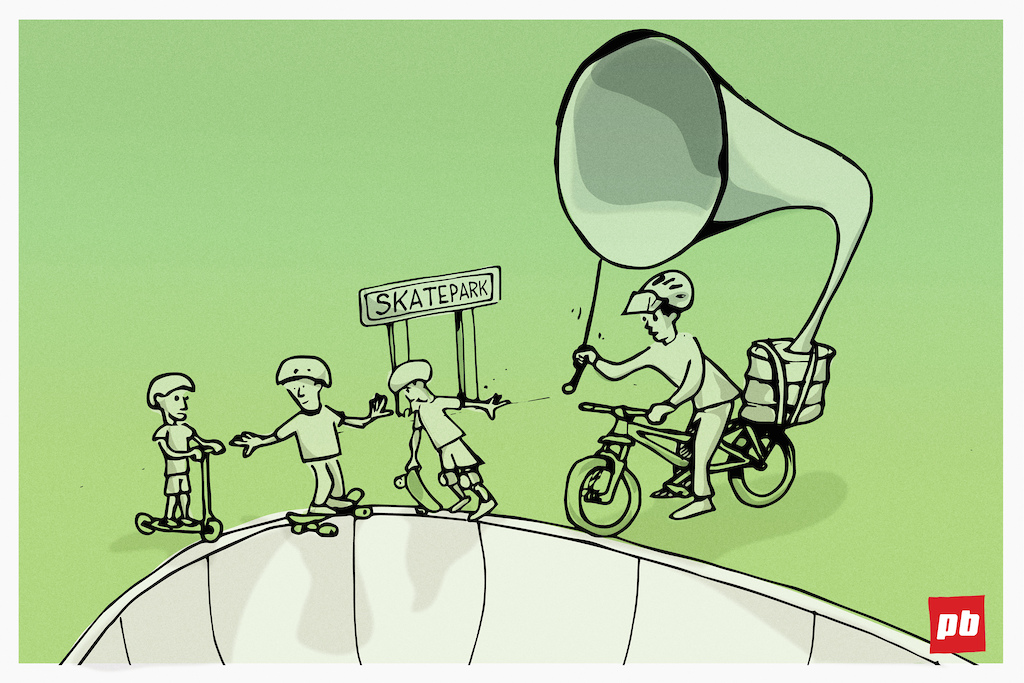 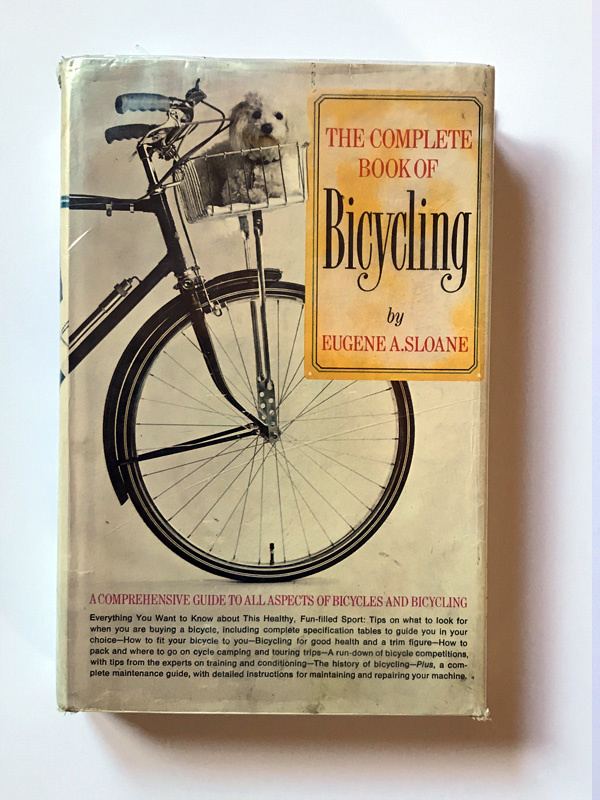 On the subject of safety: Cycling in parks.

"…I was confronted by a gang of young hoodlums. Fortunately I had my Freon-powered boat horn with me."

-The Complete Book of Bicycling by Eugene A. Sloane

I'll go out the way I came in with a couple more of them. Take care everyone! 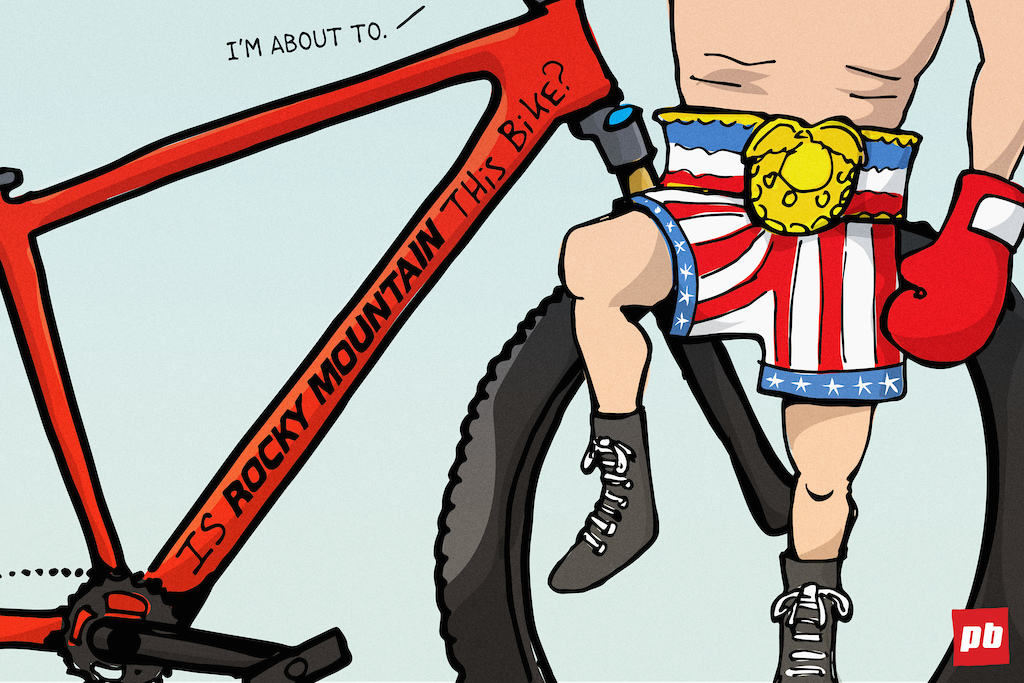 I could never think of one for Rocky Mountain until today! Rocky Balboa mountin' his steed. 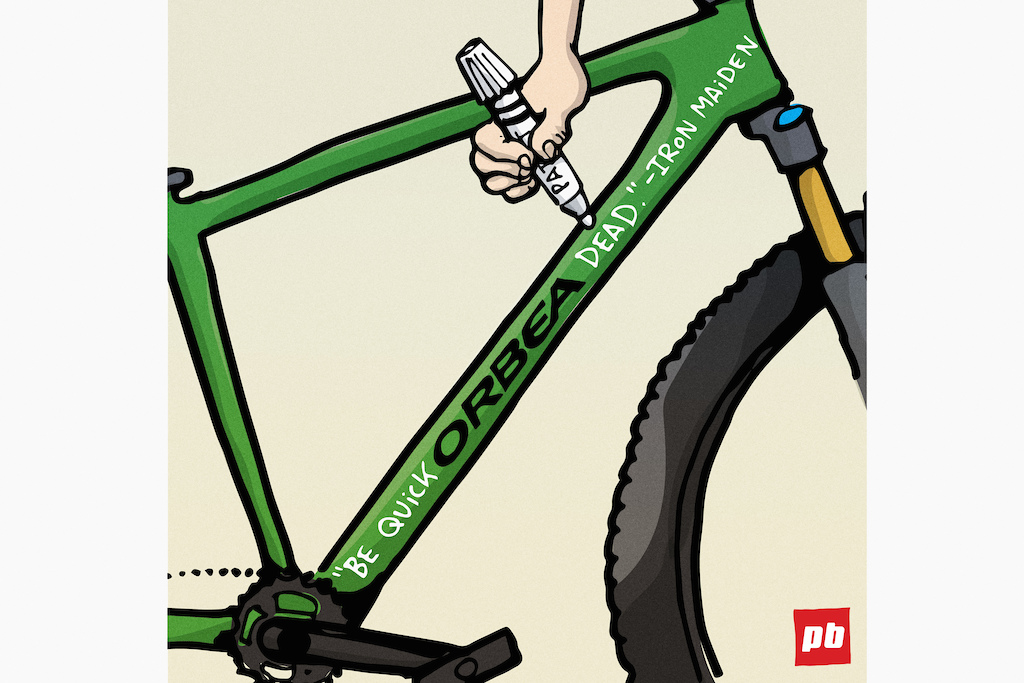 To explain this one I'll let 'Maiden play me out.

Coolwinner05 (Feb 23, 2020 at 5:25)
Sad to see these go. It was something to look forward to in sunday mornings! Thanks for the multiples laugh over a coffee, Taj!

49thbiker (Feb 23, 2020 at 5:29)
I guess I’ll just stare at the wall while I enjoy my morning cup of coffee next Sunday. Thanks Taj. You made me laugh a lot and scratch my head in confusion some.

WAKIdesigns (Feb 23, 2020 at 12:02)
These were great Taj! It’s not easy to stay fresh with ideas for so long! You were killing it for quite some time. Bike world is not visually commenting on politics, the bottomless well of inspiration that unfortunately still gets people in the end. Thank you for good laughs

Dropthedebt (Feb 23, 2020 at 5:07)
Who on earth could possibly mix up their drinking bottle fluids...? I loved seeing your work on a Sunday morning Taj. Thanks for the chuckles.

Geochemistry (Feb 23, 2020 at 6:49)
Please make guest postings of your comics. Your sick sense of humor is the same as mine, and these will be missed. Pinkbike just got a little duller. At least we can still TGFW (Thank God for Waki).

weappa (Feb 23, 2020 at 6:44)
Going to miss Sunday comics! How about putting the past years together in a book? Perhaps sell via PB with results going to a good charity or yourself!

Wheeliesquad (Feb 23, 2020 at 10:05)
I’m gonna really miss these. Always a highlight of my Sunday. This was one of my favorite ones you’ve done. Loved the water bottle! Your climbing I hill and reach down for a drink and get a mouthful of tire sealant ????

scotttherider (Feb 23, 2020 at 6:51)
I know why you were laughing about torque swords. Same reason I got a kick out of titling an anchor pull test procedure. The CU3 pull-out test procedure....

jacobyw (Feb 23, 2020 at 6:54)
Levity on Sunday is a good thing, thanks for the funny-fifty-two. Maybe next Sunday someone will post the most violent and devastating of the Friday Fails, all with the Divider-in-Chief's helmet-less head super-imposed over the unfortunate riders. I think I'd enjoy that..

domdomdomdom (Feb 23, 2020 at 7:57)
Super enjoyed the Sunday comic fun! Reminded me of looking forward to ogri the motorbike comic strip in the Sunday papers when I was young.

Peskycoots (Feb 23, 2020 at 11:12)
Hey Taj with all the new found free time you have can you do an interview with that Matt from the looking sideways podcast pleeeeeeease

TrevZ (Feb 23, 2020 at 19:06)
Taj just make a patreon, it sounds like a lot of people here like your drawings and it'd be a place for everything to be all together.

gcrider (Feb 23, 2020 at 5:19)
Love your work. Thanks for the laughs. Looking forward to seeing more in the hopefully near future.

kootenayjoe (Feb 23, 2020 at 6:53)
Um im a little bit upset, this is the only thing i go to pinkbike for on sundays. Nooooooooooooooo

Side note to PB why has the Cerro Abajo gone completely unnoticed this week?