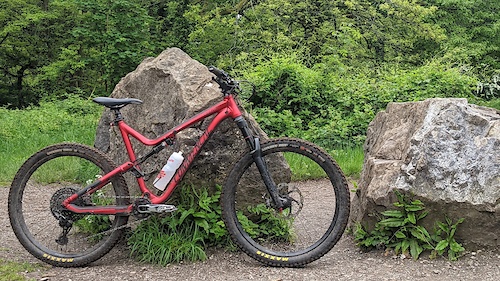 $1200 GBP
Selling my awesome 2017 Commencal Meta V4.2. I've had it from new for 4 years and it has been ridden hard. There is some cosmetic damage to the paintwork, on the top tube and chain stays. It has had Hope Fortus 30 on Pro 4 Boost hubs put on, the Yari has been upgraded with the Charger 2.0 damper and Debonair spring so is basically a Lyrik Ultimate now. It was serviced very recently, when the damper upgrade was put in. The shock is an Upgraded Fox shock. I upgraded the brakes. It came with Levels and they were terrible. It now has SRAM Code Rs on there that have been ridden once, that were taken from my new bike. The drive train is a bit of a hybrid of SRAM GX Eagle and Shimano Deore, thanks to the current supply issues with parts. It has an Eagle Cassette and chain and Deore mech and shifter. Works perfectly, but has some wear. 170mm Reverb dropper, brand new Fabric Radius saddle. I had no real intention of selling this bike as it has been superb. I'm only selling as I found a Hightower in stock and fancied a change on impulse.

$200 GBP
Set of Hope Tech Enduro's for sale. Some cosmetic marks and scratches to the rims, as they have been ridden for three years. Solid set of wheels, Hope Pro 4 hubs in black, front and rear, runs fine. No rim dings, both rims have been setup tubeless for their entire life and run tubeless happily. Running true. 27.5 boost front and rear. 23 mm internal. Selling as I had to have new shiny and could afford Fortus...

$125 GBP
Fox 32 CTD Evolution CTD 120mm Travel, 15mm Thru Axle. Slight mark on the crown as shown in pictures. Stanchions are immaculate and fork is in great working condition. Only selling due to new bike. Prefer cash on collection from Bristol but can post 48 hour Parcel Force, UK only. Hedgehog not included.