Moos Trails - You Reap What You Sow.

Dec 31, 2009 at 10:35
by Daniel Jones
Tweet
Winter's here again, it's time to get the shovels out for more cold and wet days in the woods stacking, shaping and barrowing endless amounts of clay. There's always work to do, more and bigger jumps to build, lips to tweak and repair, it never ends. It may seem like a lot of effort, but it'll be worth it when Spring arrives and we get to test everything out. There's nothing better than having your own spot to ride and chill at all summer. We started our new spot nearly two years ago, here is the story of Moos so far.

See more inside...The trails were started in the summer of 2008, I had snapped my frame and couldn't ride, so I decided to build up some abandoned jumps. This is how they looked at the start of the summer. 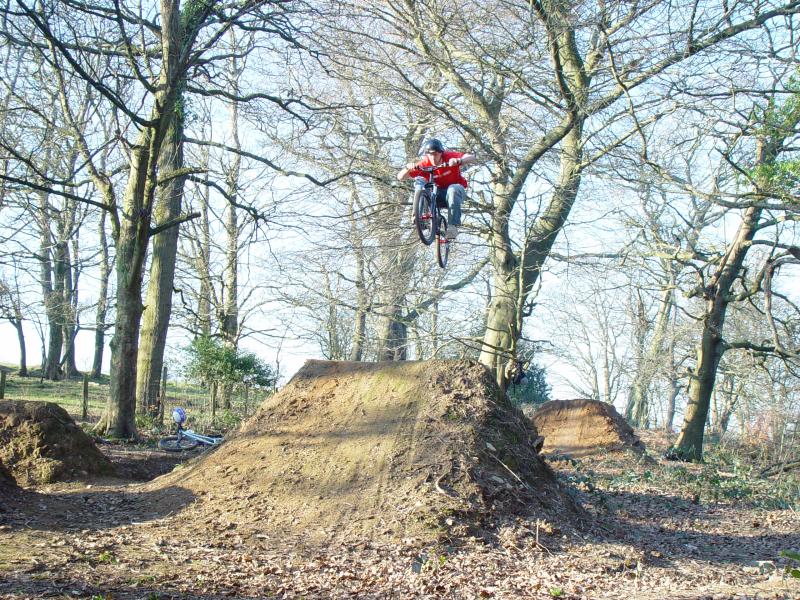 These would go on to become the 2nd and 3rd jumps in the line.
By the end of summer 2008 they looked like this. 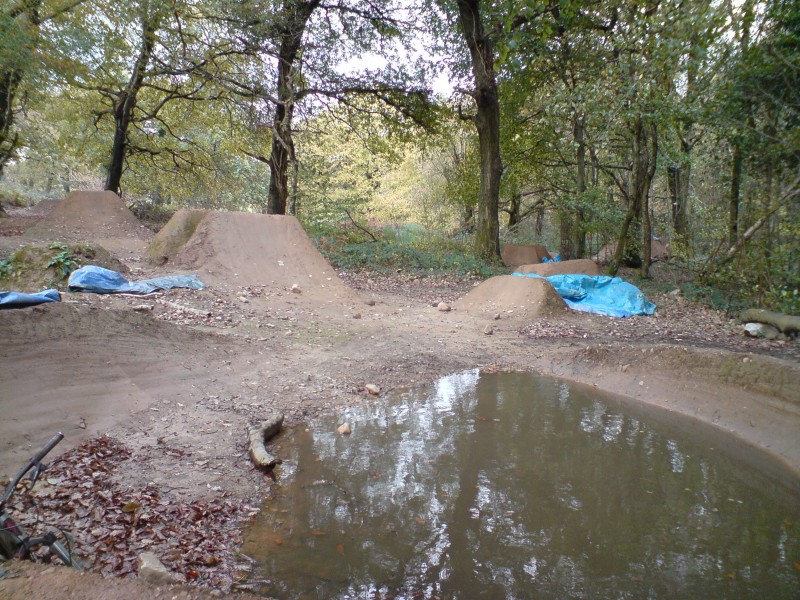 Long n low, 2nd, 3rd, 270 berm, 4th, 5th and 6th
And then it was winter and the serious digging began, well not for everyone, as usual everyone disappears when the spades come out. Things didn't go well, it got really cold and stuff kept collapsing so progress was slow, never the less this is what we got done... 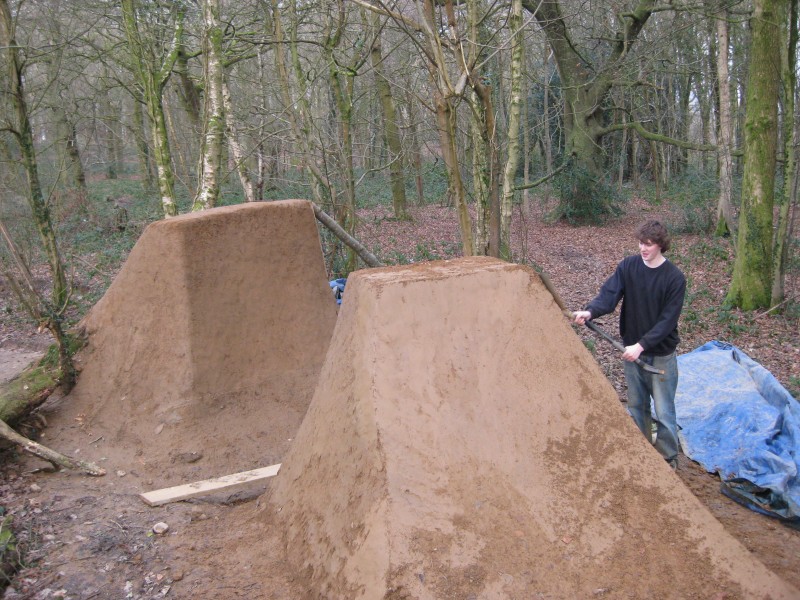 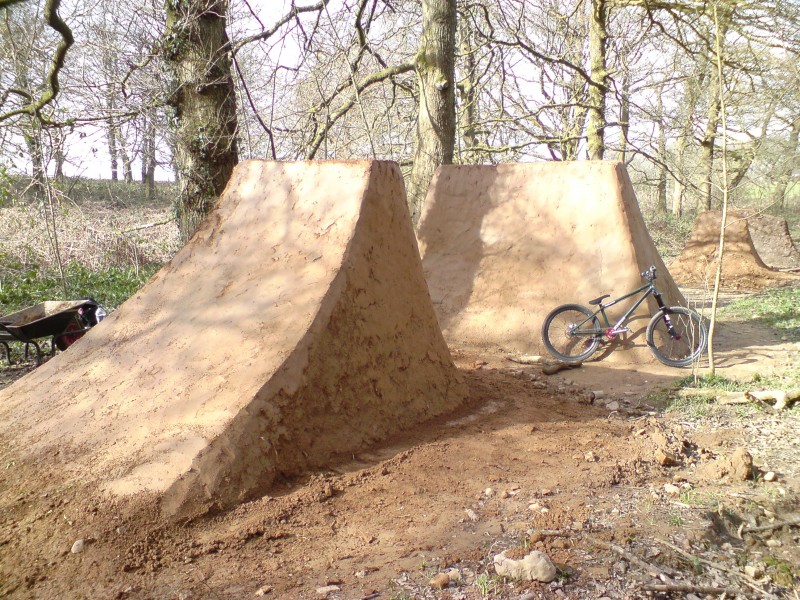 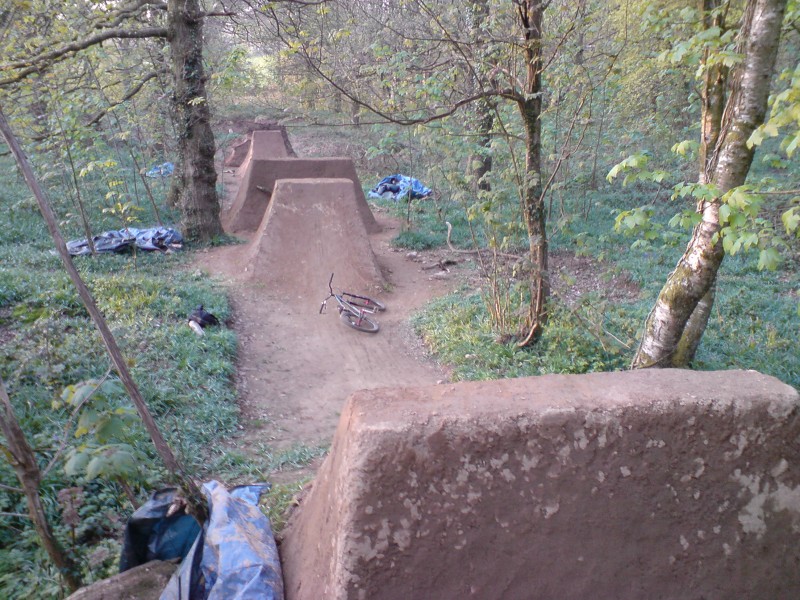 8th and 9th
Spring came early this year, it was dry enough to ride by mid March, time to test the new jumps... 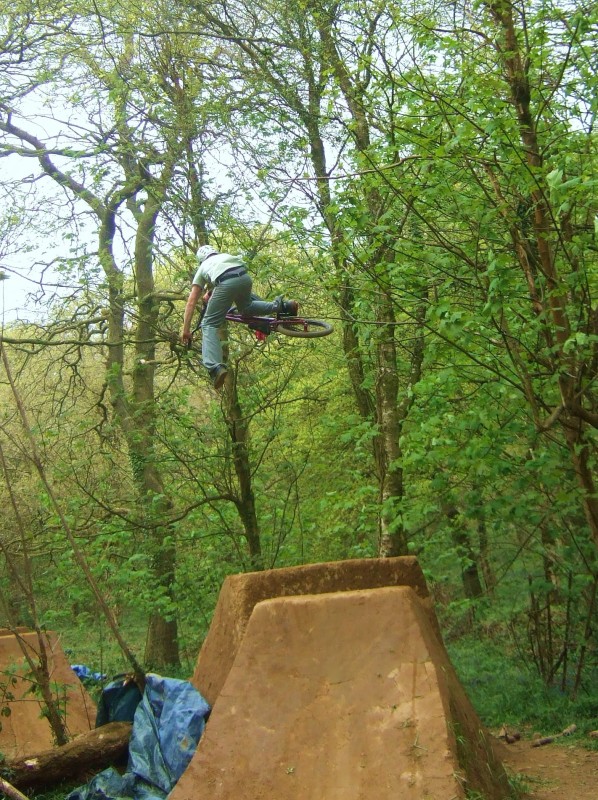 Edd one foot table on the hip, April 2009
The hip worked well, it was hard to clear at first but it soon dried out and was riding good. The 8th didn't go quite so well, it was impossible to make and we spent ages deciding whether it would get faster and be ok. But it didn't so we made major changes, knocking a foot of height off the lip and landing, and then tweaking the lip and steepening the landing. 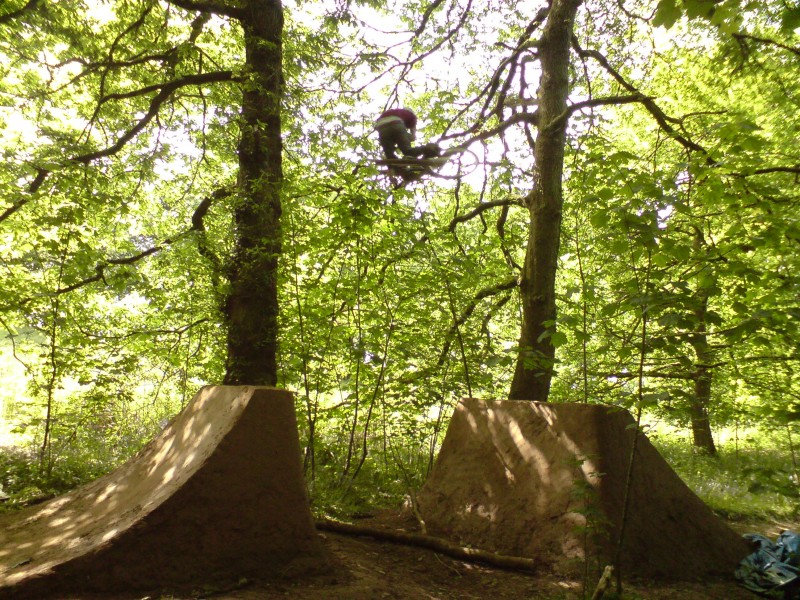 Edd table on the 8th
It was the end of May by the time we got it working, the day after this pic was taken Edd over rotated a 360 and snapped his leg, that was the end of his summer, he's back riding now though.

The weather had been pretty good so far and June was no exception, but July was the wettest since 1939, it rained almost everyday and we did barely got any riding at all. August was a bit better, and so onto the 9th... 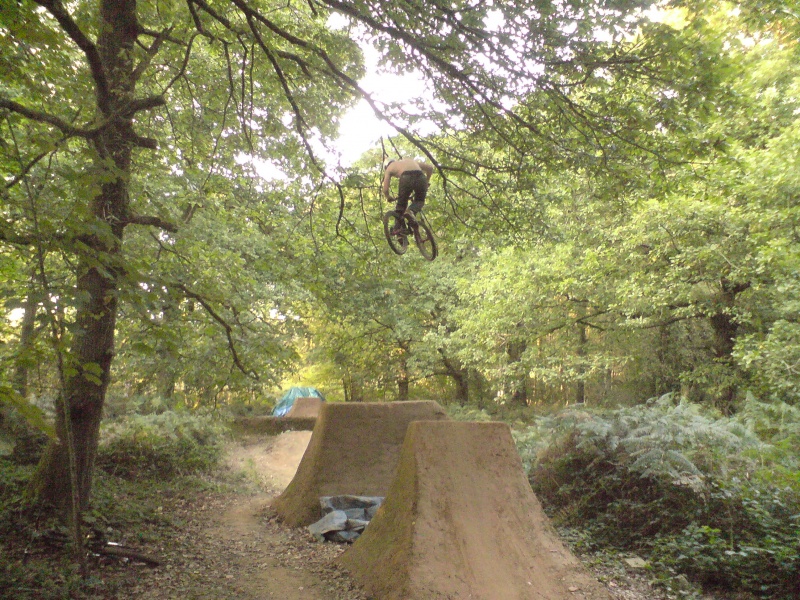 Geoff first day riding the 9th
It was a bit long, so we made a small adjustment to the lip, scraping off an inch to make it slightly mellower and also a few inches off the landing as it was ridiculously steep.

Here's a few more pics from the summer, mostly riding but we did some building as well... 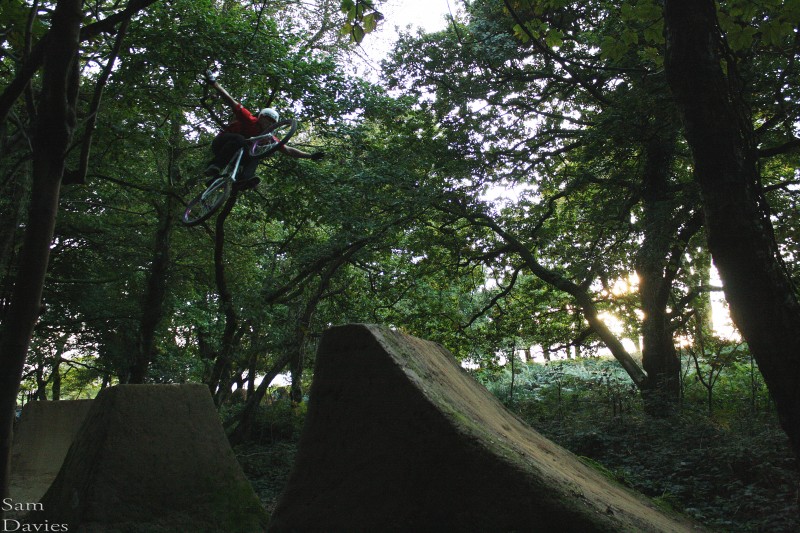 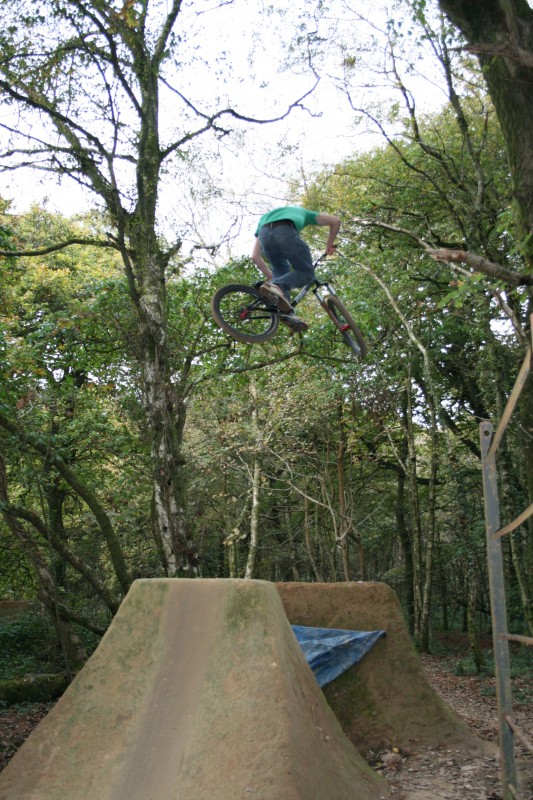 Geoff on the 6th 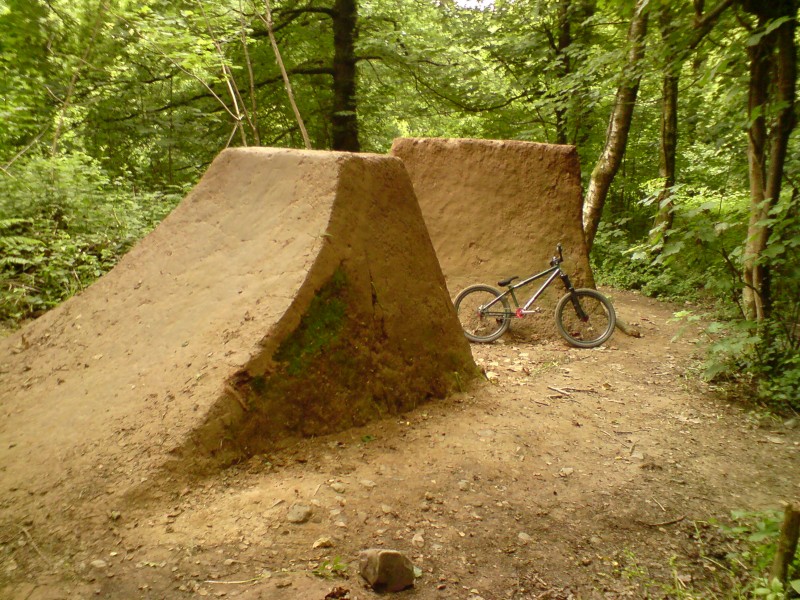 The hip in summer 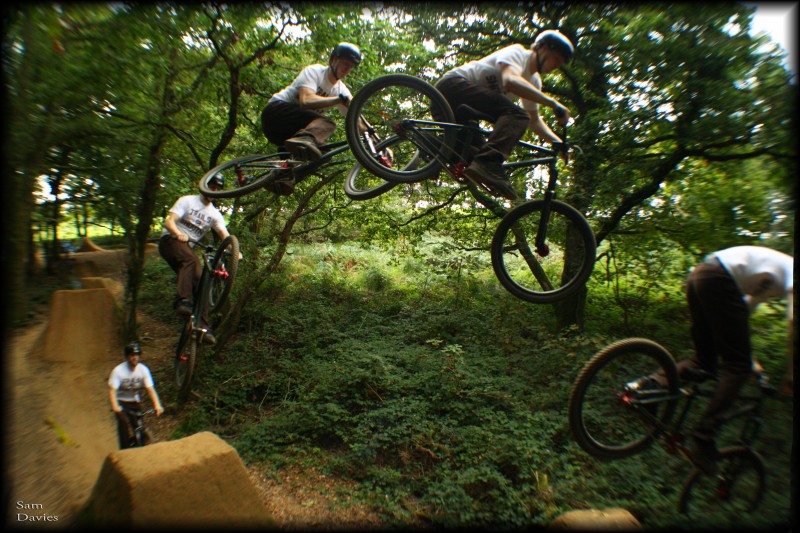 Me on the hip 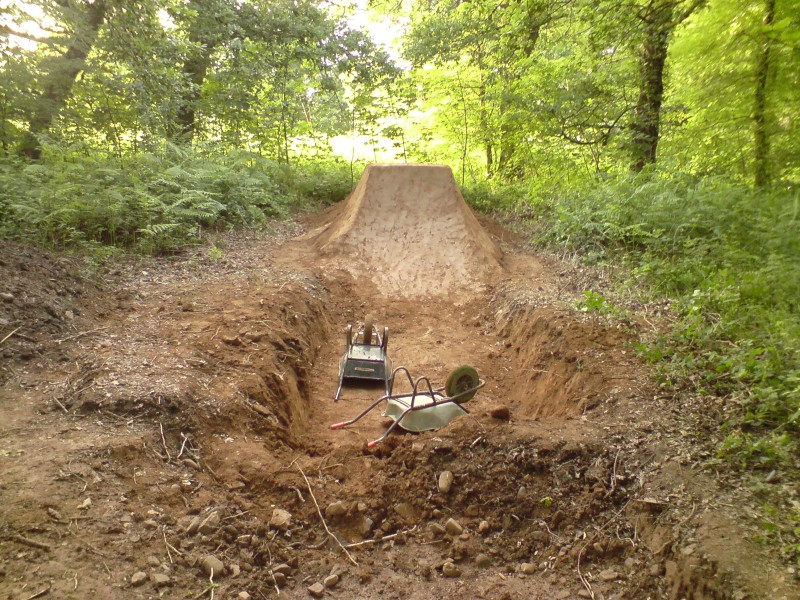 Building the step up lip 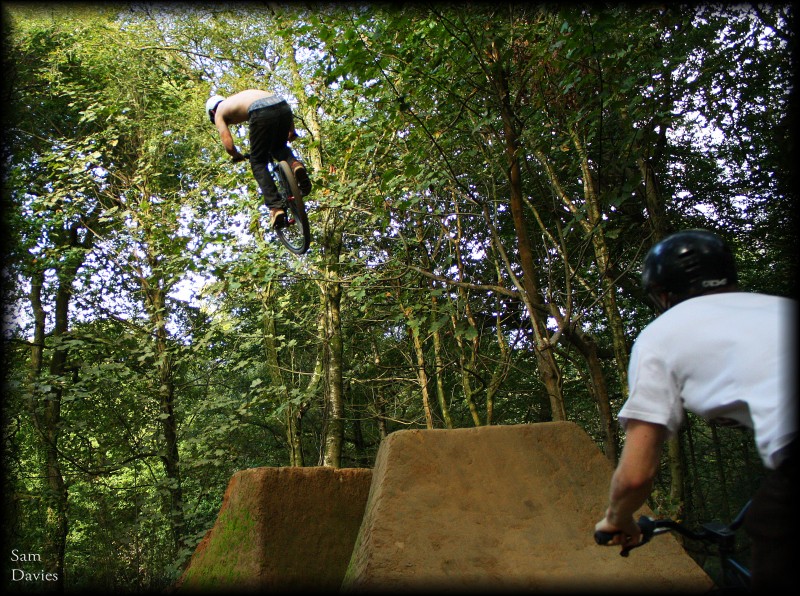 Train, me and Geoff 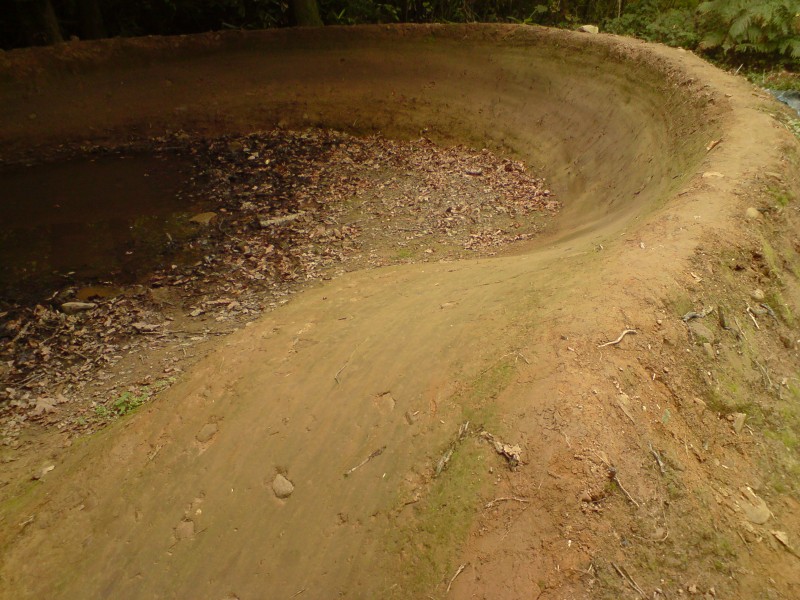 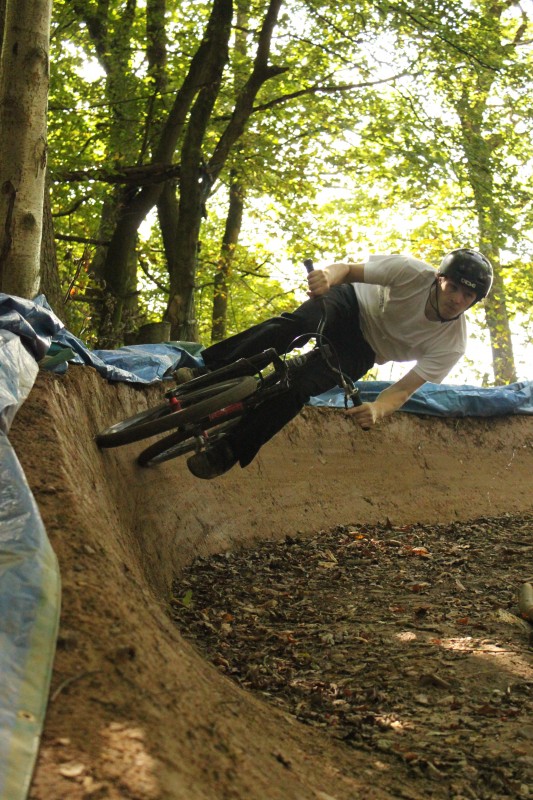 Me berm on new line 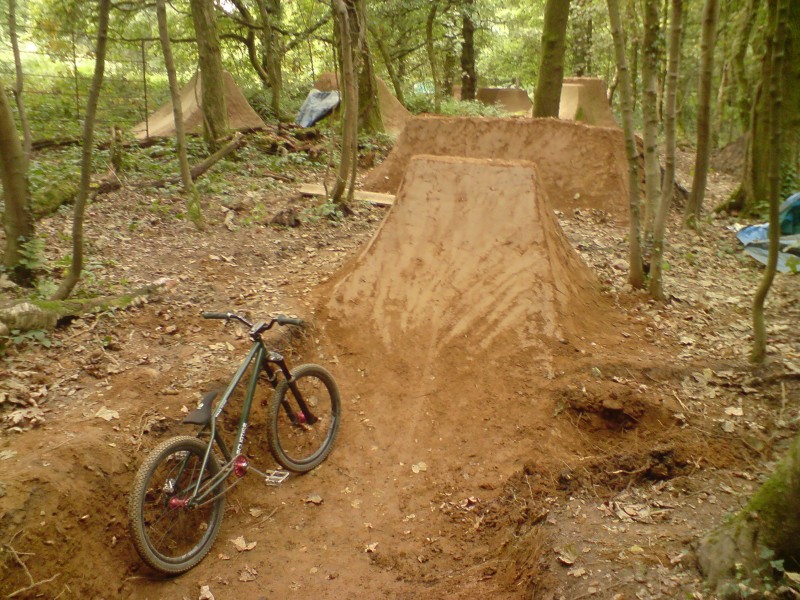 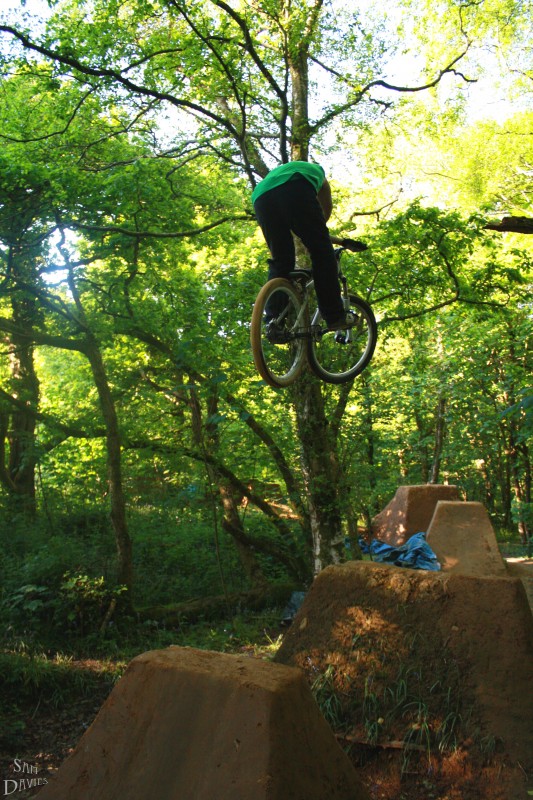 Rob, x up on the 6th
I don't have much video footage unfortunately, there's a couple of clips in this video featuring Danny Pace, one of the locals. The video was made by Jack.

Keep up to date with the latest at the trails on my full blog here.

ridingqc (Jan 12, 2010 at 5:29)
Why neg prop him? Thoses are so smooth a BMX could do them, looks like some jealous kids neg props everytime he see BMX written.

suicidedownhiller (Jan 12, 2010 at 7:48)
I would kill to have that kind of dirt here. We have to make our jumps 4 times wider than the lip so they're strong enough...Too dry and too sandy.

taylor-j (Jan 12, 2010 at 9:26)
i would love to have jumps like that but every time we biuld big trails either dog walkers or the council rip them down, but props to u guys for building some awsome trails and i hope to see a video of the jam if u get one, oh and does anyone know the name of that song plz

samspec (Jan 12, 2010 at 11:42)
i have exactly the same problem, takes the piss how you can be doing something productive instead of getting pissed and pissing on the poppys at the memorial (some sick bastard did that in our town) but they see it as vandalism

doug13 (Jan 12, 2010 at 23:38)
Speak to landowners, send letters to the council and keep on top of it. They can't ignore you forever. If you are building trails without permission someone will get pissed off.

dsazonic (Jan 12, 2010 at 2:23)
nice work guys i dont ride jumps but ive built them before and its back breaking labour to build one "double" thats half the size of yours. well done guys happy riding

urbanassault73 (Jan 12, 2010 at 6:47)
Those are some sick flow sections you made Dan. That berm is nasty! Hopefully you'll get that jam session or two this summer. Great work, I'm inspired to find a place and start digging away.

purplemonkey73 (Jan 12, 2010 at 19:20)
they are absolutely perfect looking trails and what a picturesque place. if i lived there with use id help use dig them every day. such a nice place but compared to here. thats like a dream land for me. your lucky. theres like moss and shit on the dirt aswell wat a nice place i cant get over it. anyways props dude on the trails and the work you've done! keep up the good work!

DirtbagMatt (Jan 12, 2010 at 9:18)
One of the cleanest lines I've ever seen. Man, if we had a legit spot around SanFran to build that the progression would be memorable...

Trailboss-Dan (Jan 12, 2010 at 5:48)
Finally found a decent video of the trails with all the locals, rhyssutton made it

brandonf (Jan 12, 2010 at 21:47)
I'm totally jealous of your trail but it's also an inspiration for the jumps im building. You're a fucking artist!

thisisezo (Jan 13, 2010 at 0:05)
Looking ultra sick now even better when we came up last year...Hope we can get some filming done there this year!

has any one got any tips on how to build good jumps?

Trailboss-Dan (Jan 12, 2010 at 5:21)
yeh hopefully we can get some of the king of dirt riders to come down, we already got Danny Pace, Adam Williams and Ashley Stares as locals so they will organise something i'm sure. We had the dmr riders down last year for a jam but it got rained off.