Trans BC Day 5 Nelson: A Test of Character and Rain Gear

Jul 8, 2016 at 23:56
by Megan Rose
Share
Tweet
11 Comments
Day 5 of the Trans BC Enduro powered by Stages Cycling fused the toughest terrain to date found in the heart of the Selkirk Mountains, and most pressing conditions, into a 40km day on the bike that started and ended on trails built by dedicated locals who have an obsession for slippery roots, long vertical descents, wood features, and steep chutes. 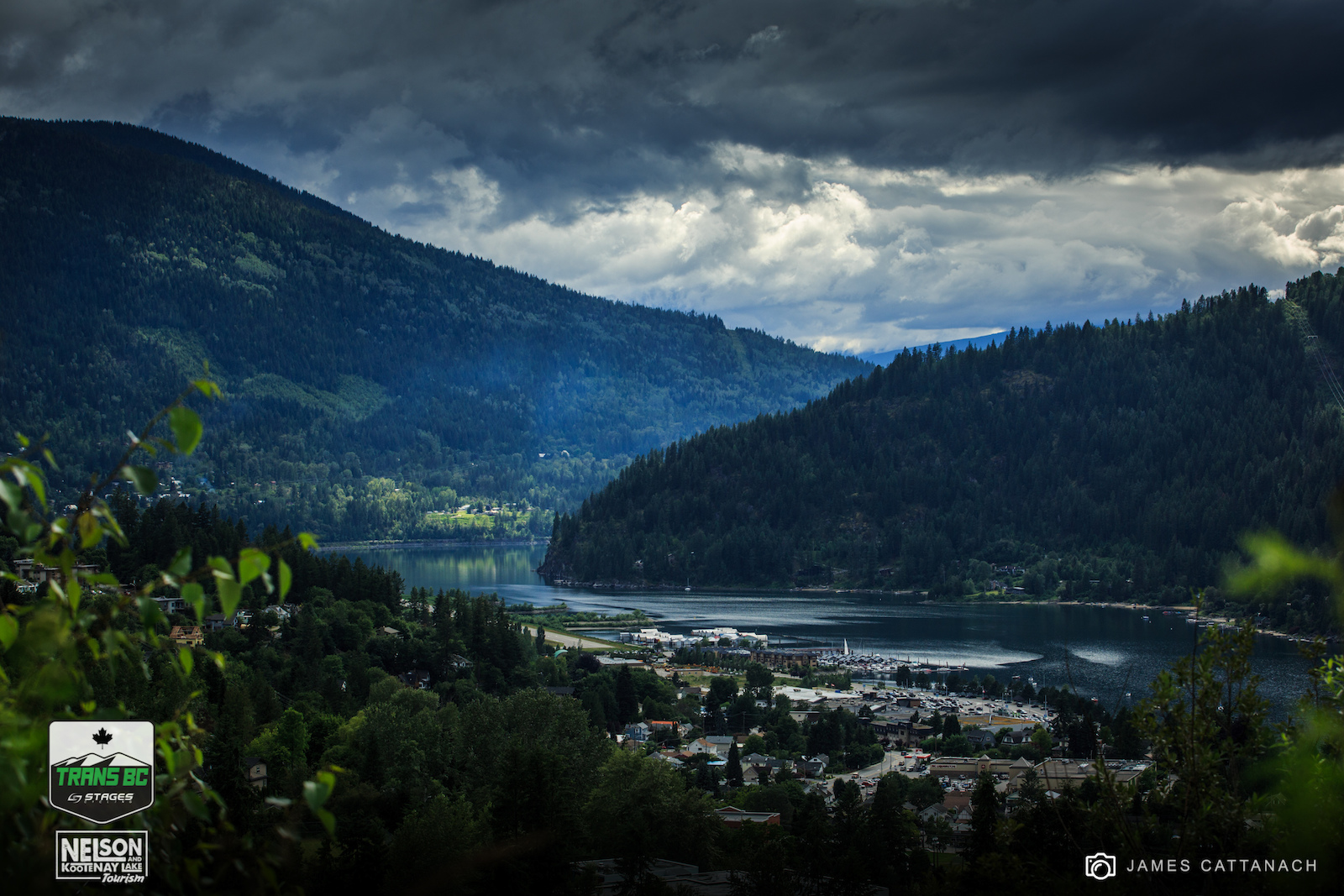 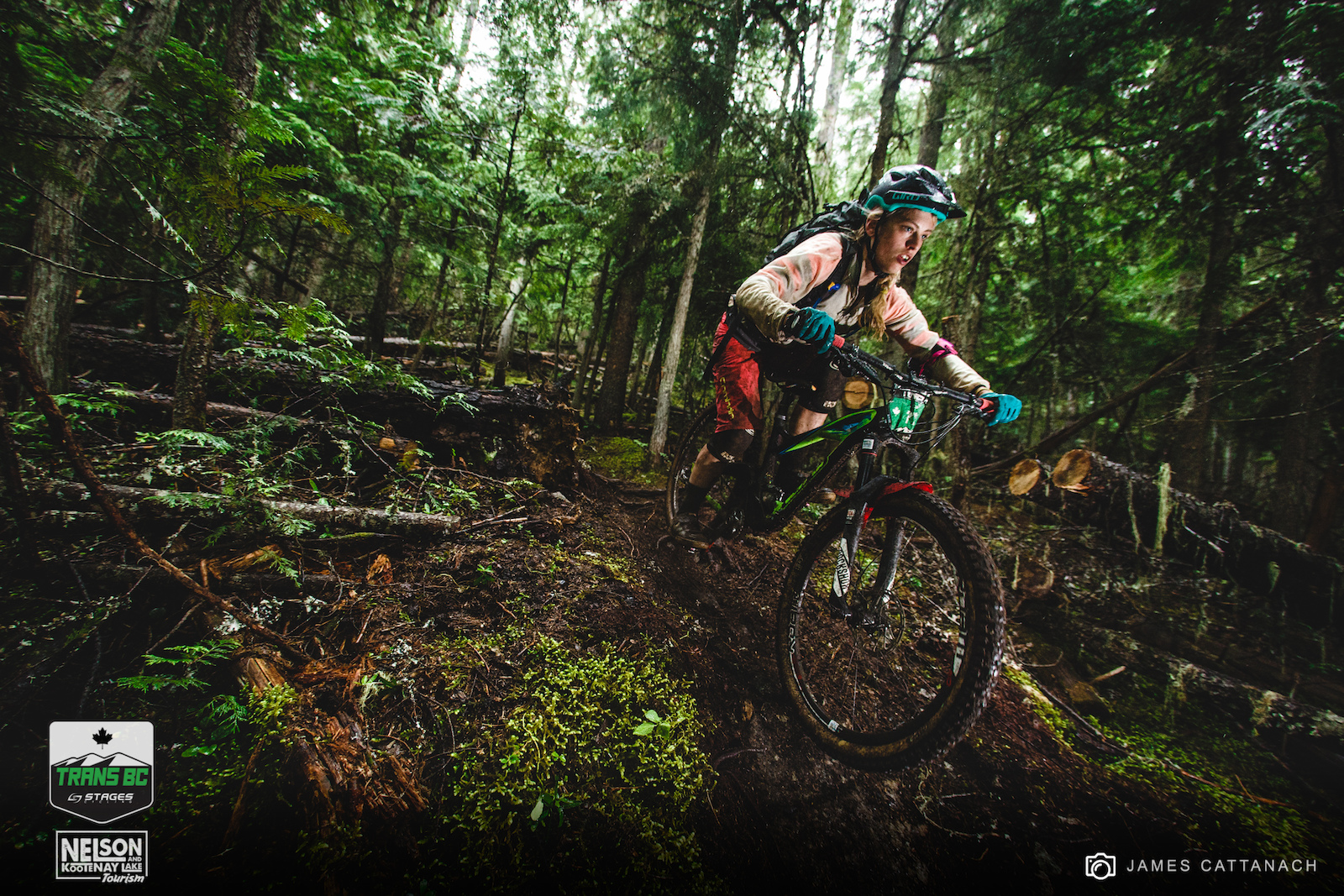 “The first and last stages were the most challenging. We started in the rain, and it was a huge slip and slide with hootin’ and hollerin’ on off-camber turns,” said Cait Dooley, Open Women (Easton, Conn.) “The last stage had a whole slew of challenges. It started off being alpine and rocky, then it got really steep, loamy, rooty, and then very steep again. You were taxed trying to keep it together from the start to the finish.” 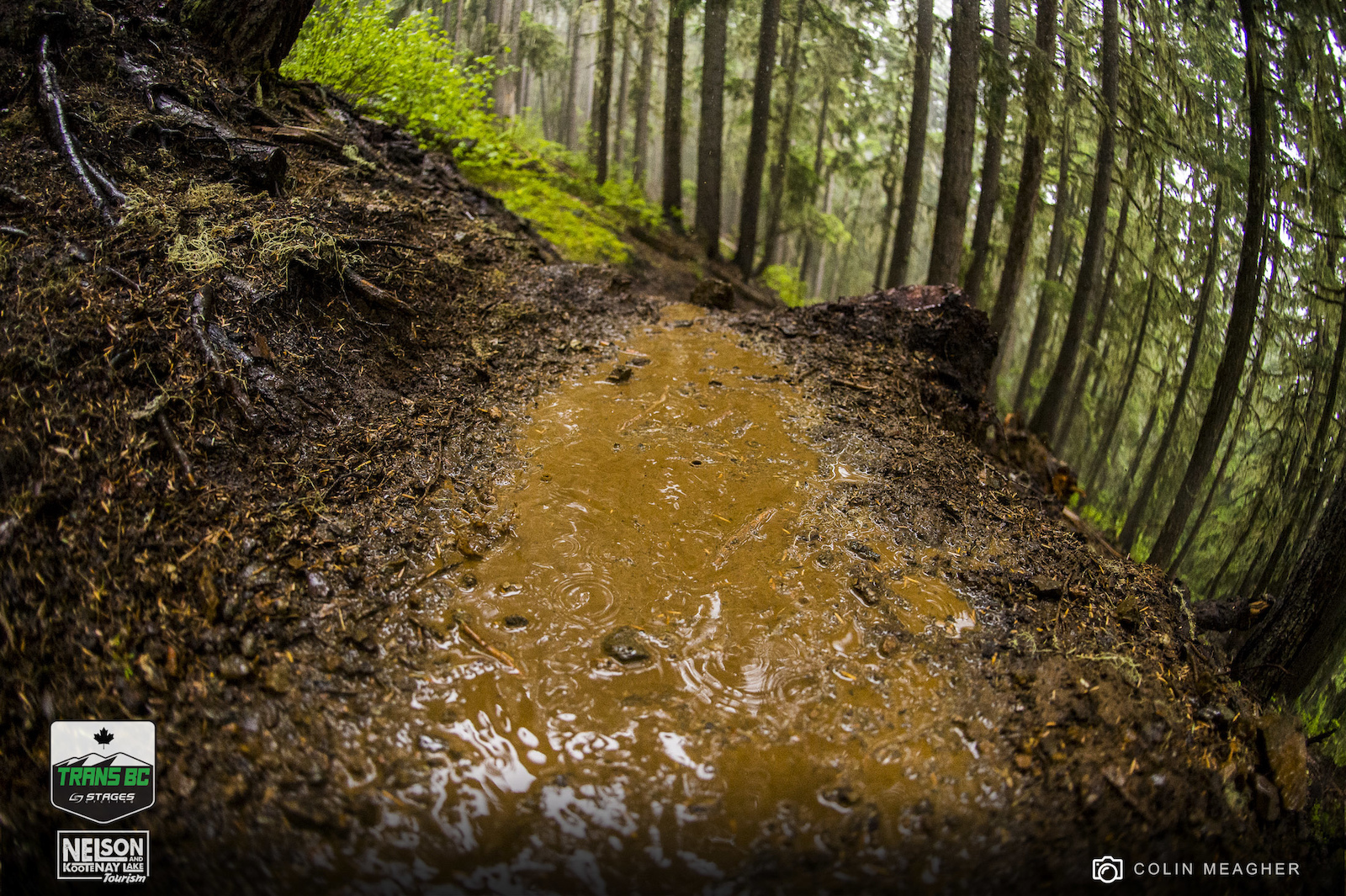 Cry me a river. The forecast was for 1mm of rain; the upper track easily received 20 times that. It NUKED. 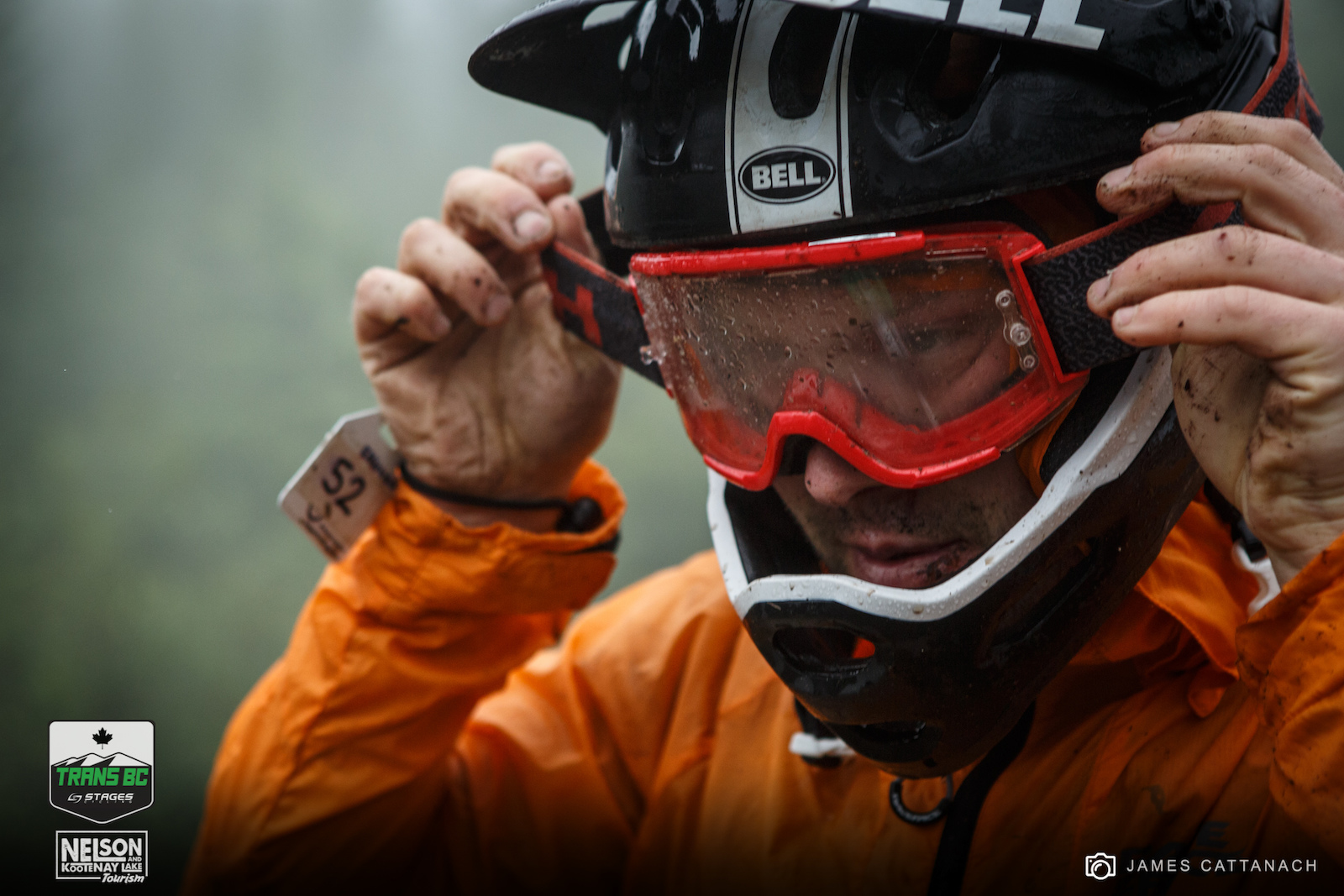 The original length of stage one was truncated due to the early morning downpour. Racers were relieved to skip an additional 45 minutes of climbing and enter Power Slave at the two-thirds mark. Some racers described it as a river down the trail, and others had run-ins with wood features, trees, and the rut of death. 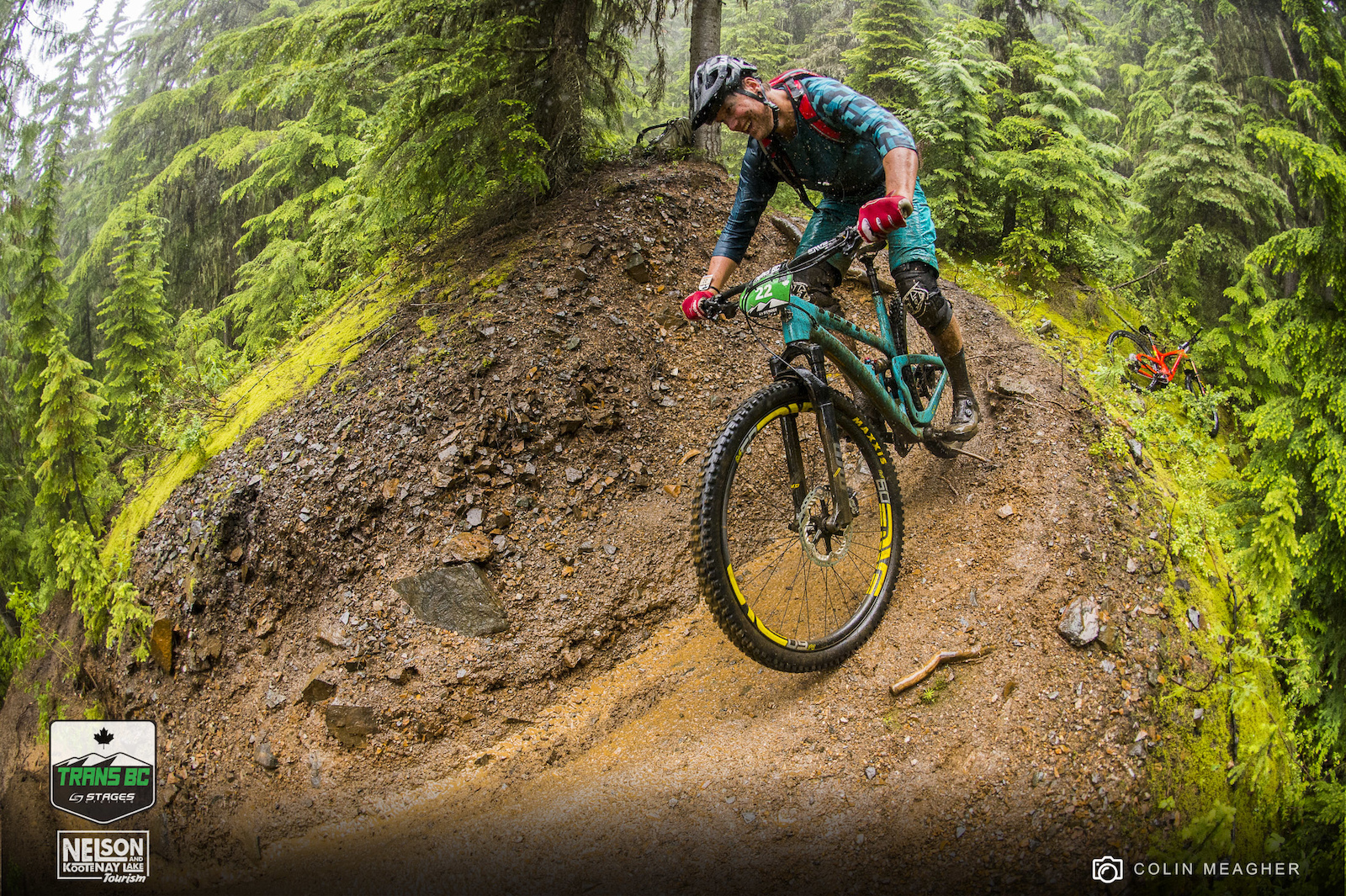 Dylan Stucki grinning like a fool on the amazingly greasy stage one: Powerslave. 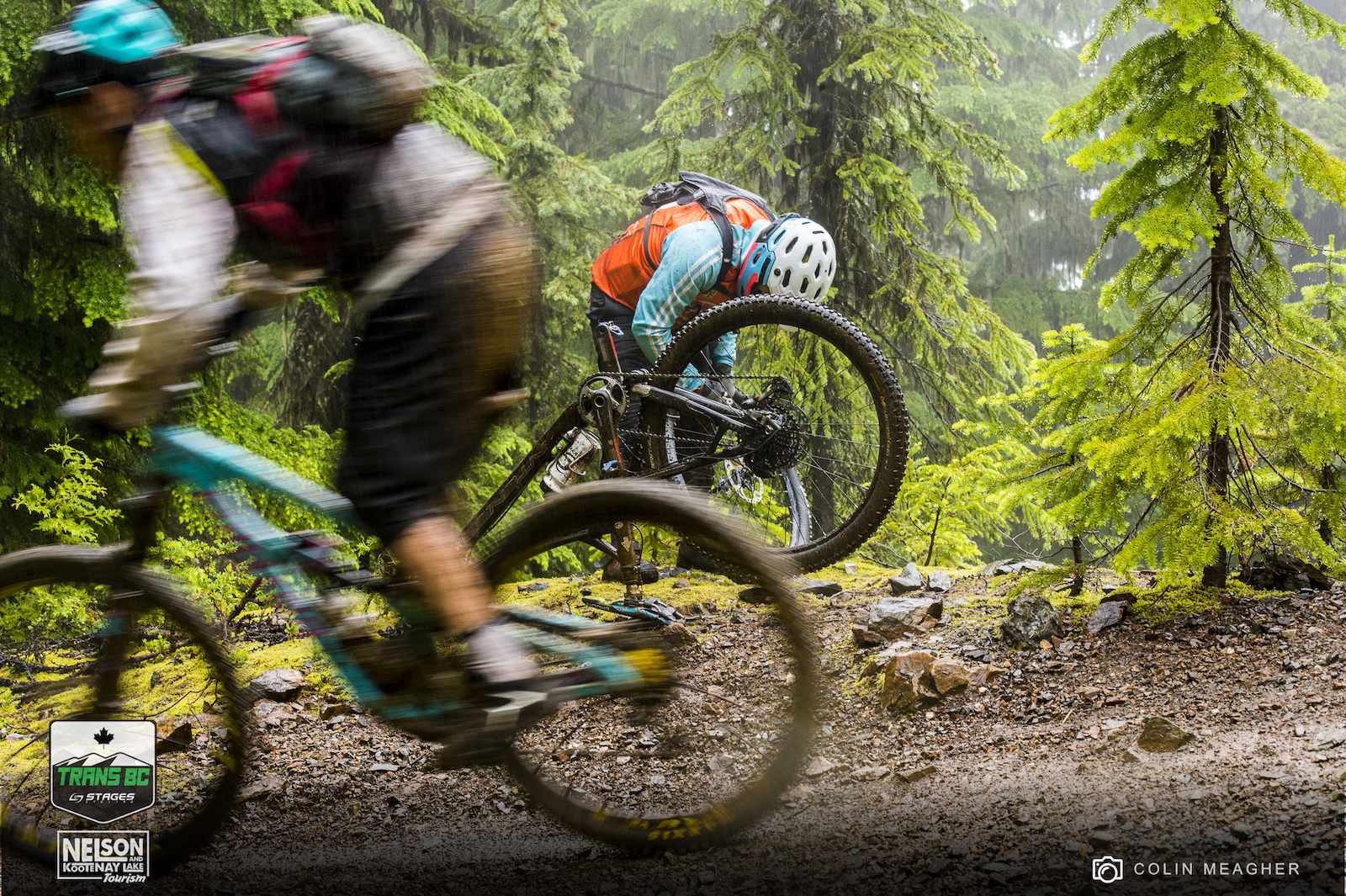 It SUCKS to get a flat mid-stage; It sucks even more to get one on a timed run down Powerslave. And it really sucks when you flat on Powerslave in the middle of a timed run and it's NUKING rain.
“I was the very last racer to drop in, and the whole trail was a rutted pit. I cried a little bit during the stage,” said Emily Sabelhaus, Open Women (Seattle, Wash.) “But on the upside, stage two was a recovery stage— fun and much drier. It was a totally different eco-system. Then three, four, and five were totally my jam. I could ride those all day.” 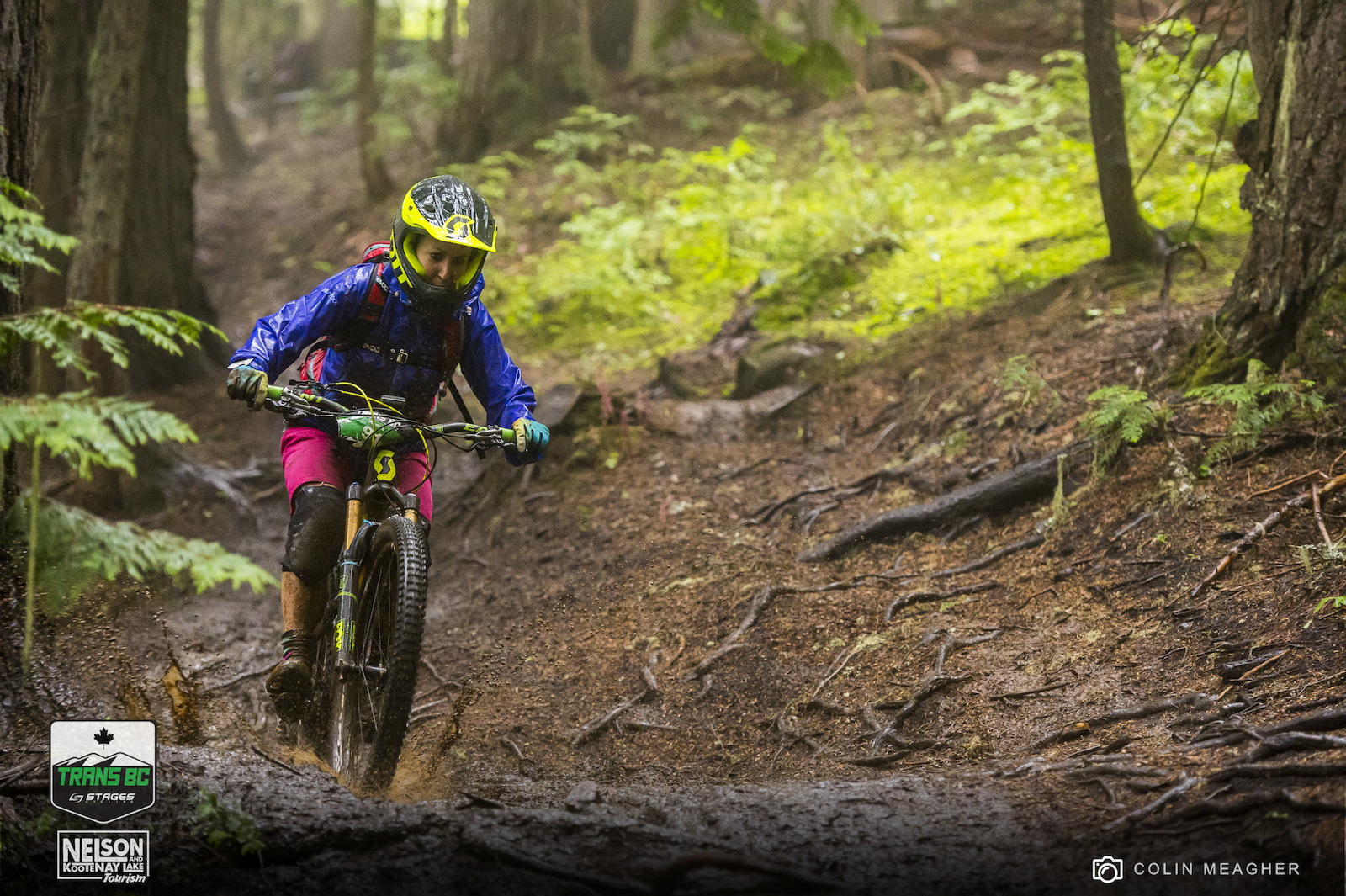 Sonya Looney cracking herself up in the mud. 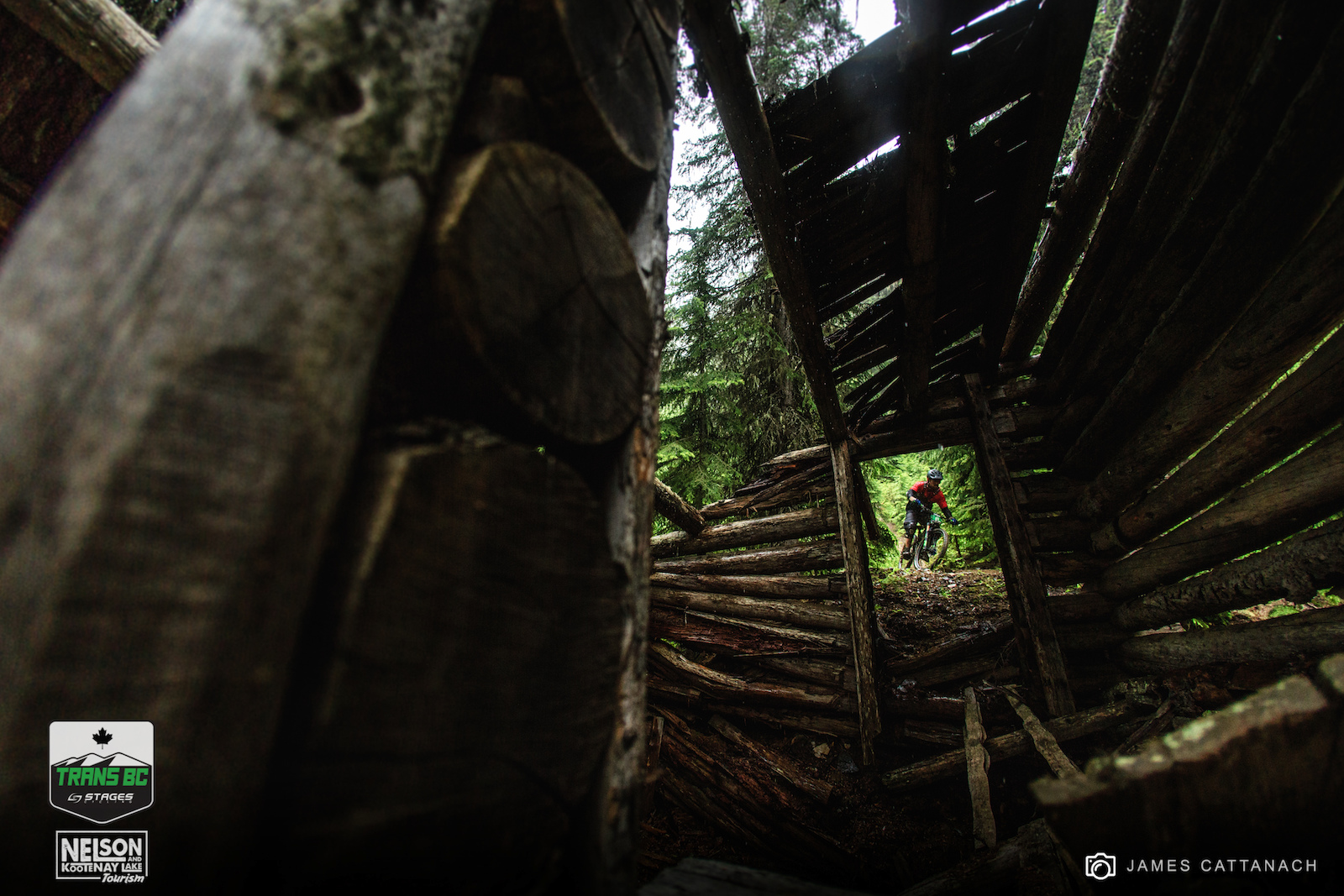 Racers climbed out of Placenta Descenta to load on a shuttle to access the other side of Giveout and Gold Creek trails to continue their day on some of the most popular descents in the area. Intermittent showers became the new norm, and as they dropped into yet another run of rootballs and rocks, racers were thrilled with more loam, and less mud, for their tires to bite into on every turn. 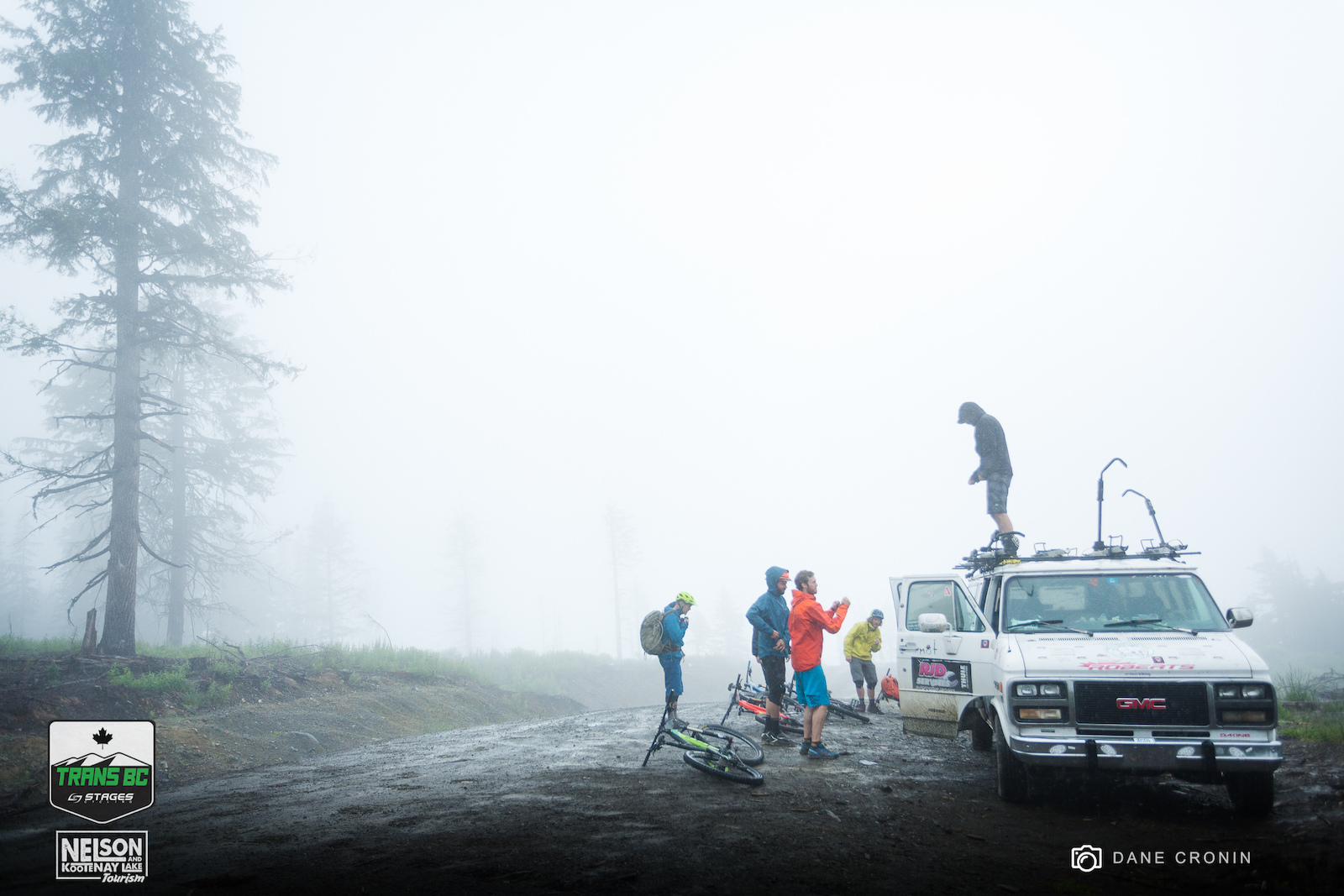 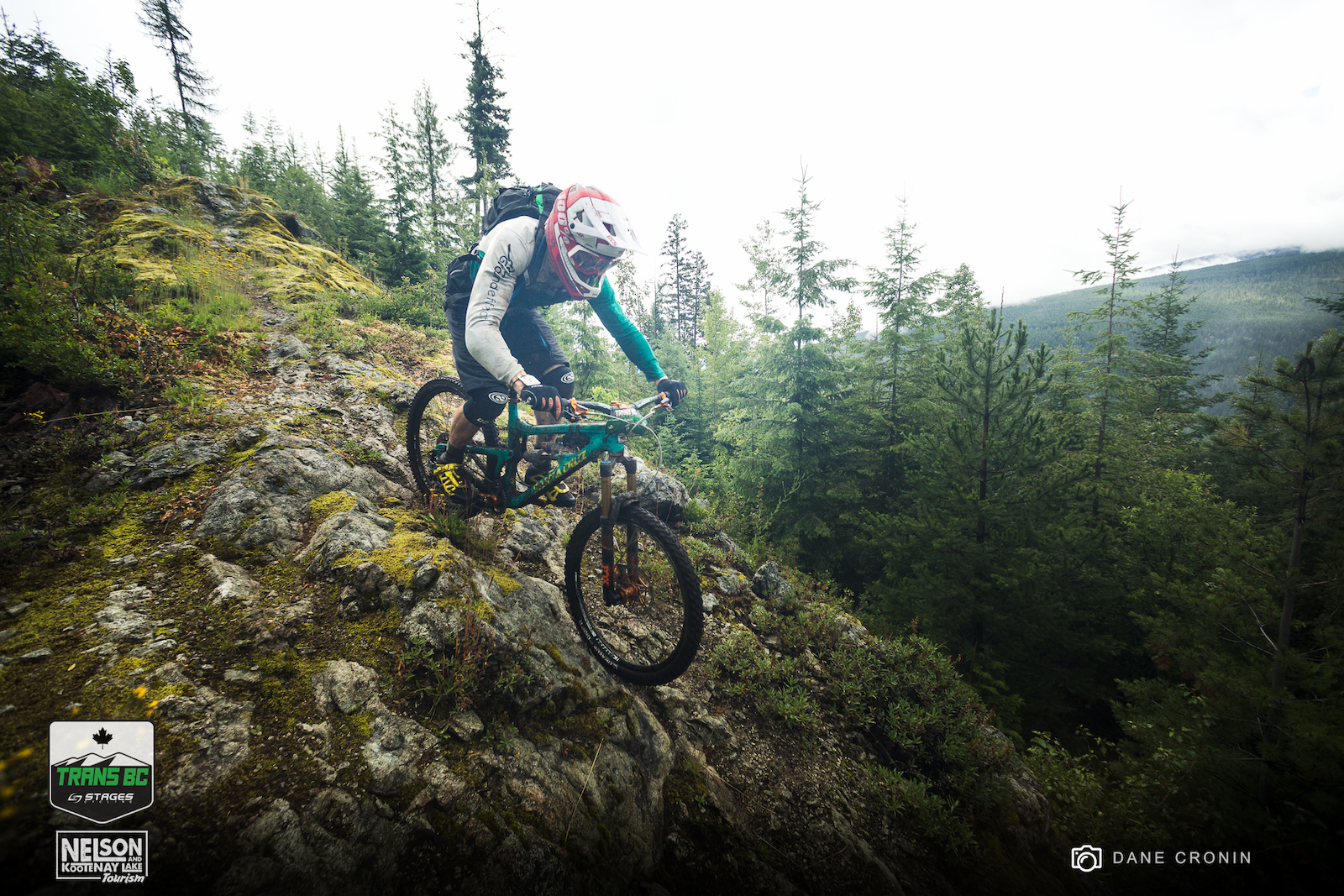 “It was a beautiful, spectacular day of riding,” said Gina Jané, Open Women (Sedona, Ariz.) “The river at the top of stage one reminded me to keep it consistent and slow down a little. After I found my rhythm on stage two, I went with that feeling and by the time I got to stage five, I just tried to rock it. I made a couple mistakes on the final stage, but it was good enough for my best day overall finish of the week— second!” 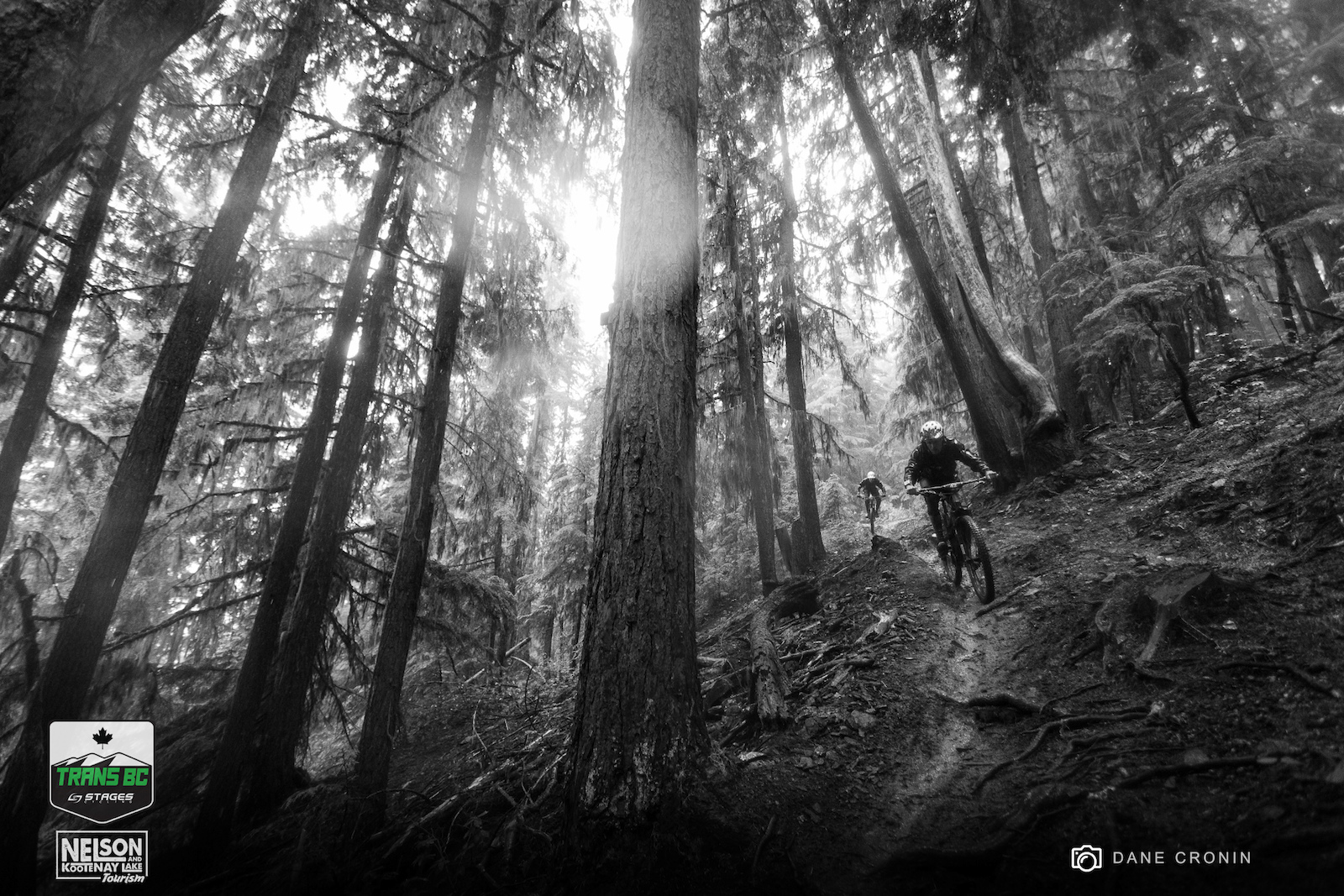 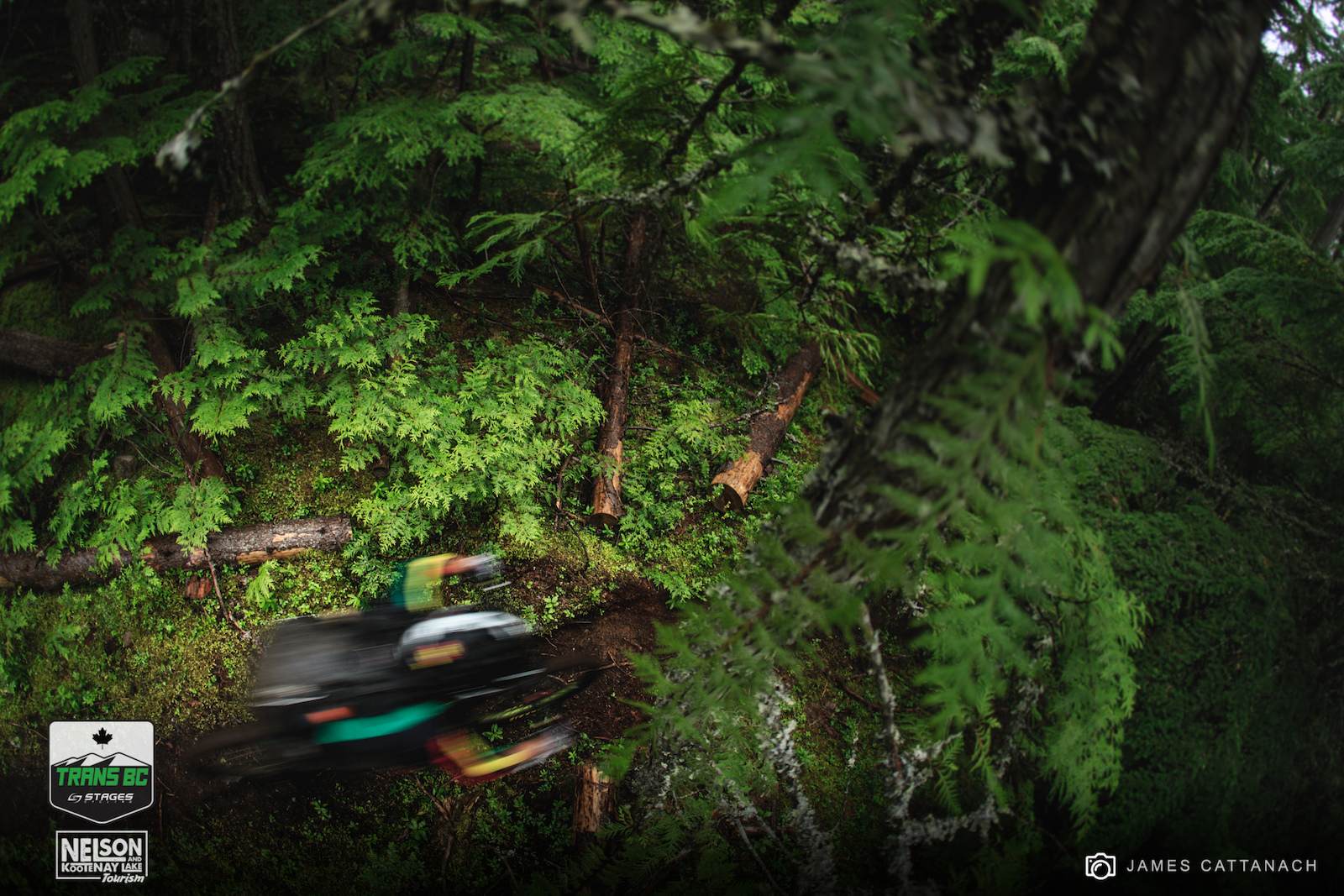 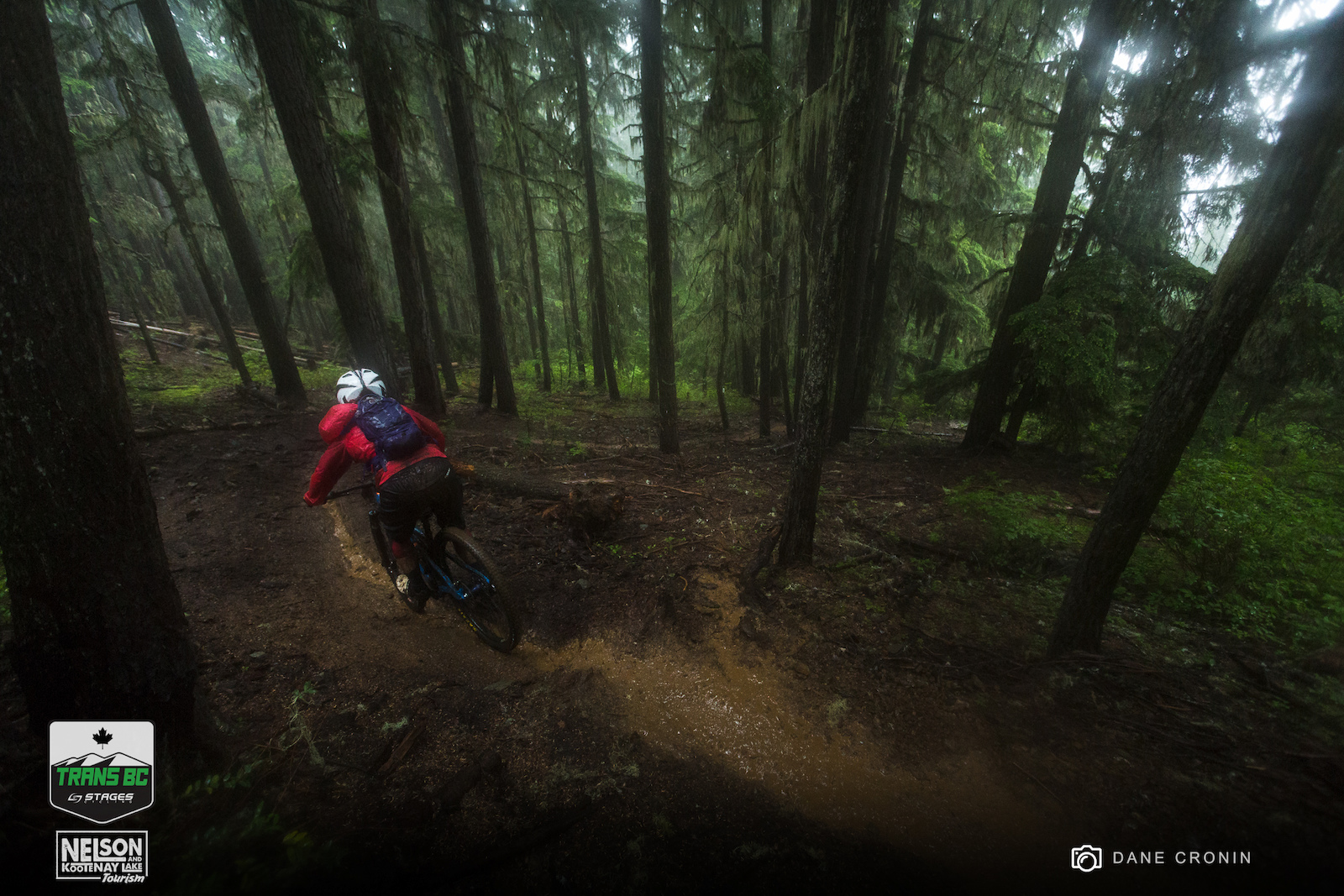 Although the pucker factor was high all day, the physicality of each stage demanded everyone’s full attention. “I thought it was going to be about keeping your momentum and not messing up on the slippery stuff, but it was half physical too. Stage five was like three downhill runs combined,” said Chris Patton, Open Men (Easton, Conn.) 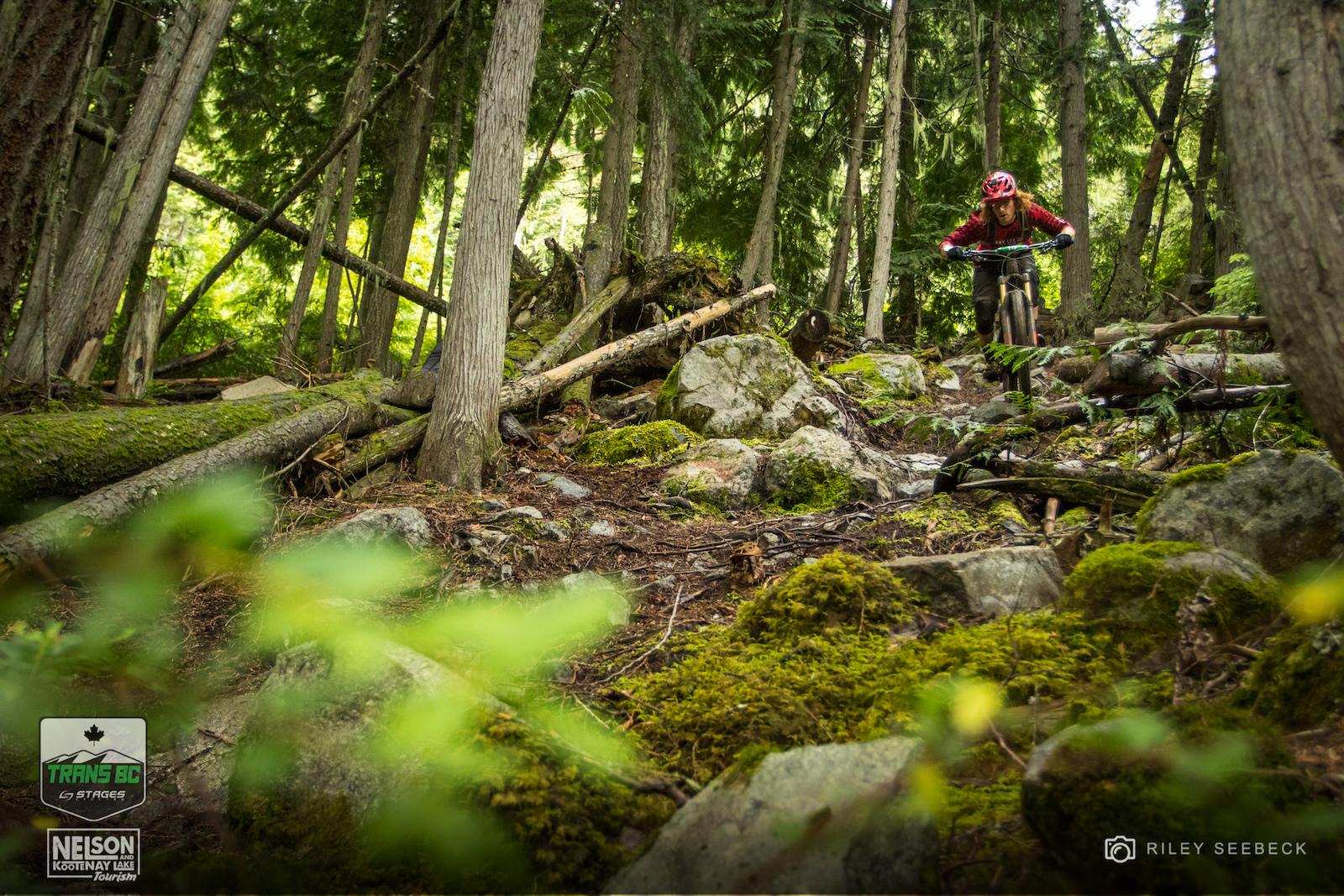 As riders pushed up the final hike-a-bike to the top of stage five, they knew they had the longest stage of the day, 10-15 minutes, still ahead of them. Little did they know it would take them on an odyssey down all the finest points of Nelson’s gnar. 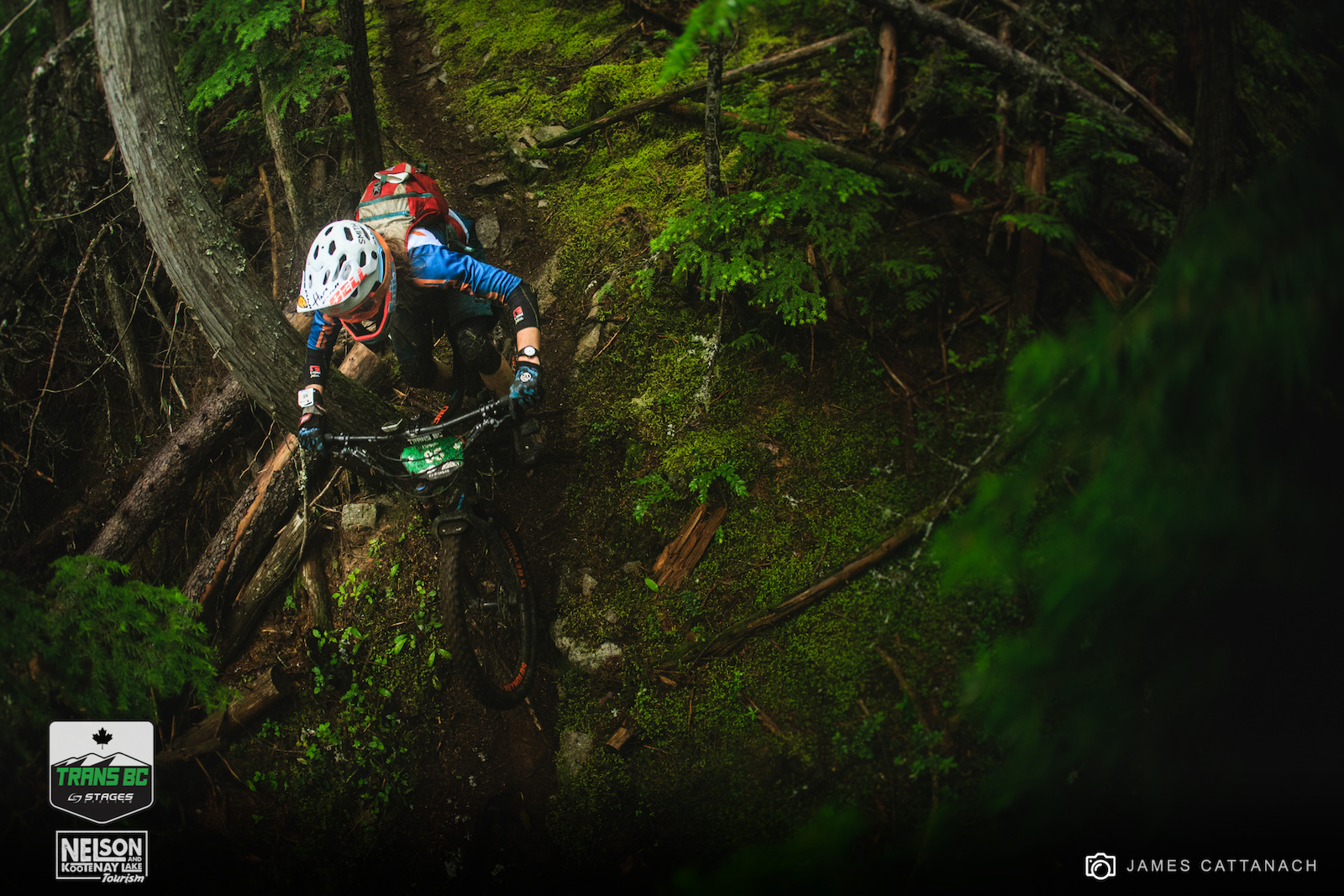 “My favorite stage was that last stage. Ten minutes of full on descending, roots and perfect dirt. It was amazing,” said Matt Patterson (NZ). “My goal here is to be the top kiwi in the Master 40+ category. That way New Zealand will wrap it up across all categories.” 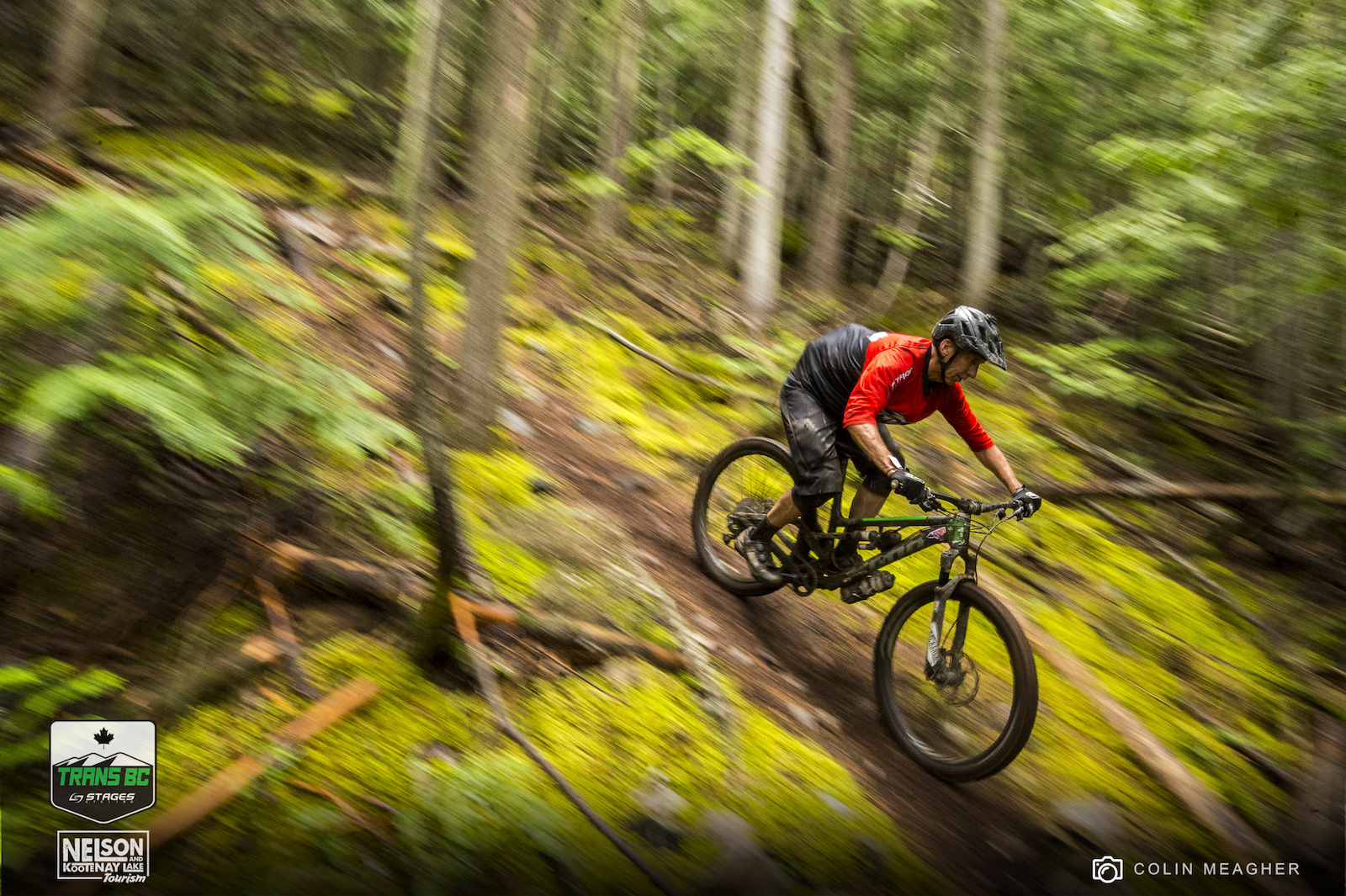 The trails blurred by the end of the day for nearly all the rider. Only the top shelf pros were able to maintain focus but even then, they were not riding 100% clean.
Others found the grand finale past their limits for the week. “We were all very exhausted, and stage five was probably the most technical stage I have ever ridden,” said Nikki Hollatz, Open Women (Hood River, Ore.) “It was above my capability at this point in the week. I was just trying to keep rubber side down and it took all my effort to maintain.” 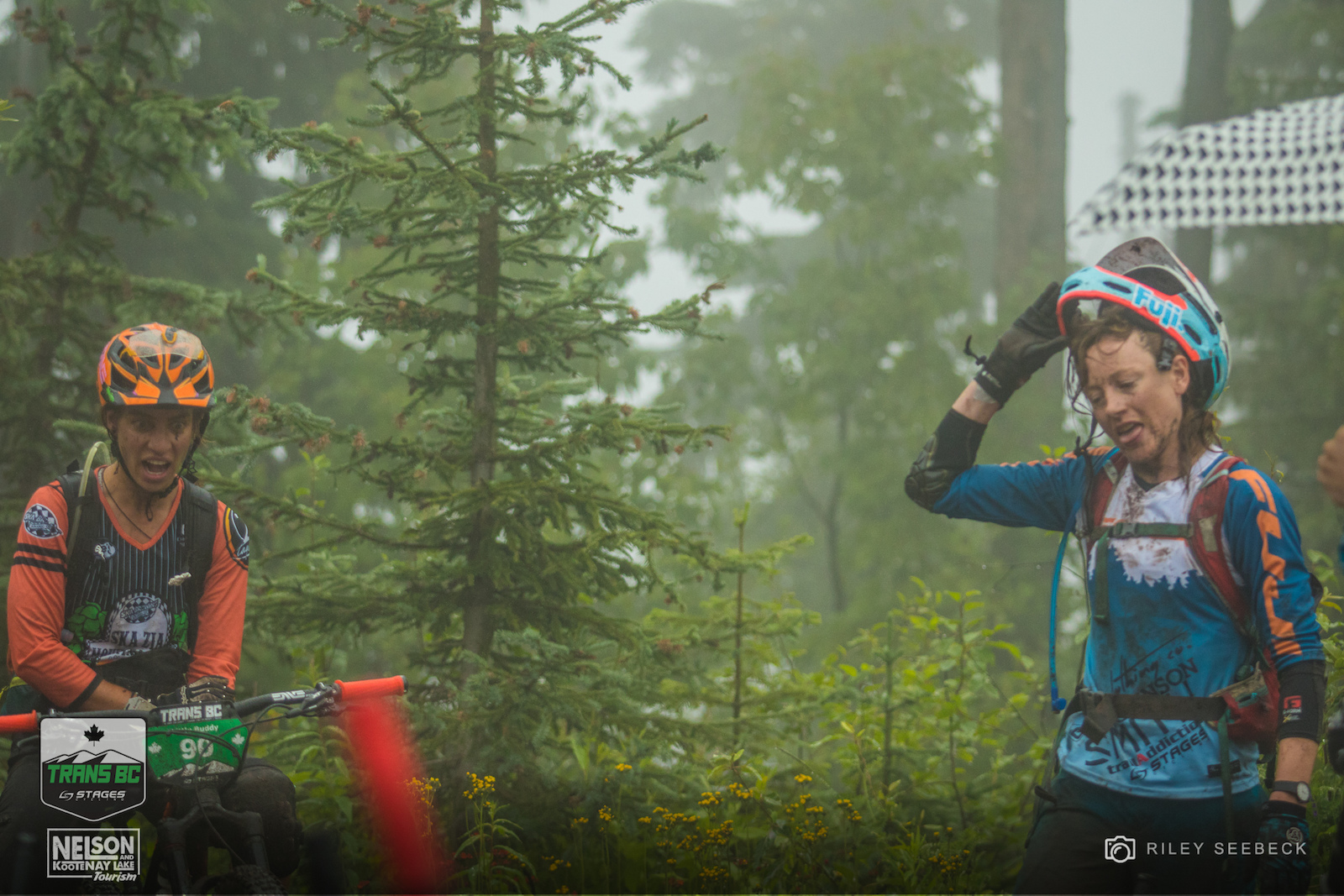 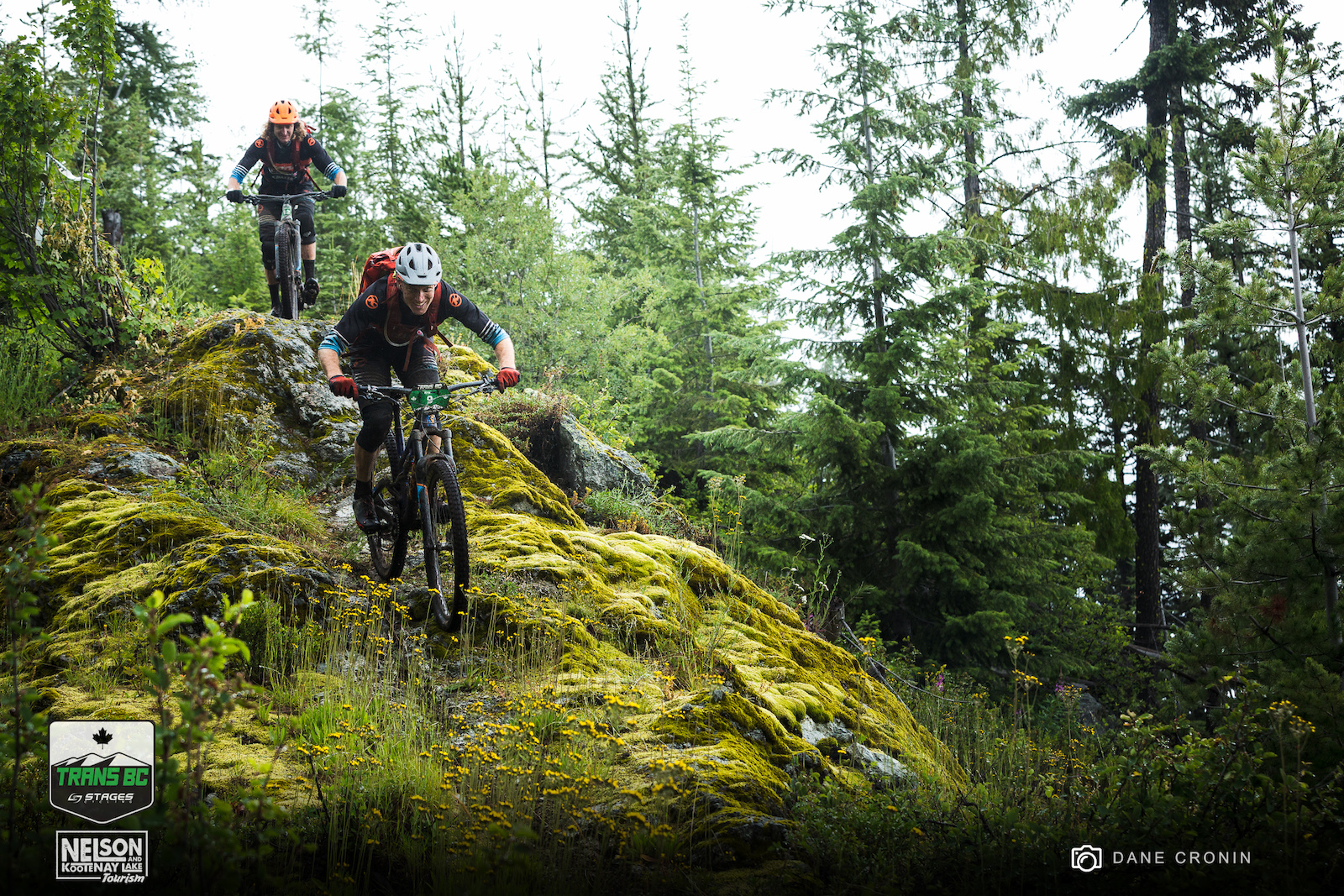 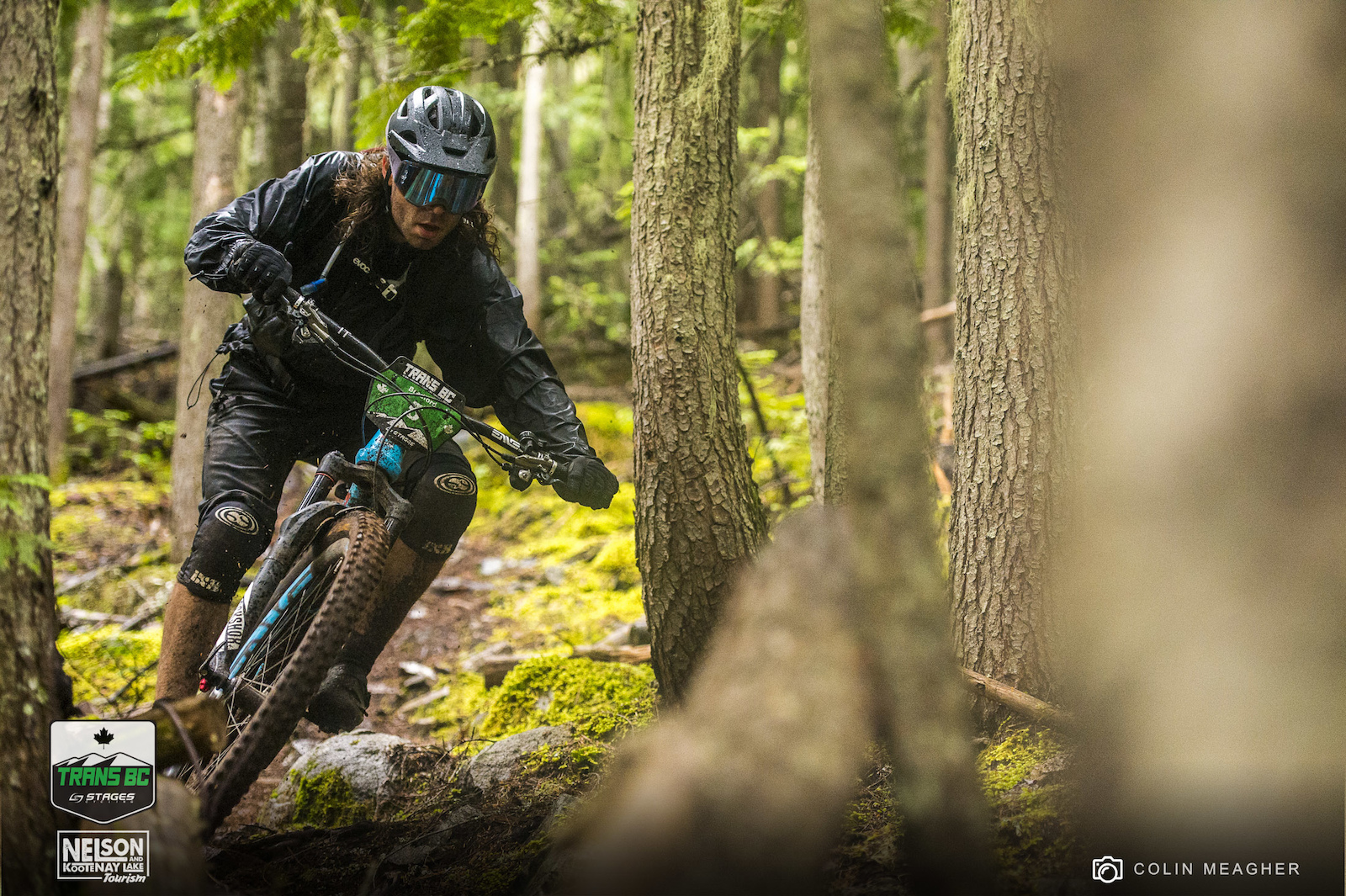 The Baron pinning it down the Waldorfian Trail.
For the final day, racers will double shuttle their way up via buses and vans as far as the access road will allow. Then they will ride and push their bike for 2 1/2 hours before they drop in from the peak above Baldface Lodge for a steep alpine track, and then through many layers of forest, before ending at Kootenay Lake with beers and widespread celebration to be had.

“This whole trip has been Megan’s big adventure,” said Ted Morton, assistant event manager. “Some souls have certainly been crushed, but we are saving the best for last. You will experience something that only a handful of riders in B.C. have ever experienced.” 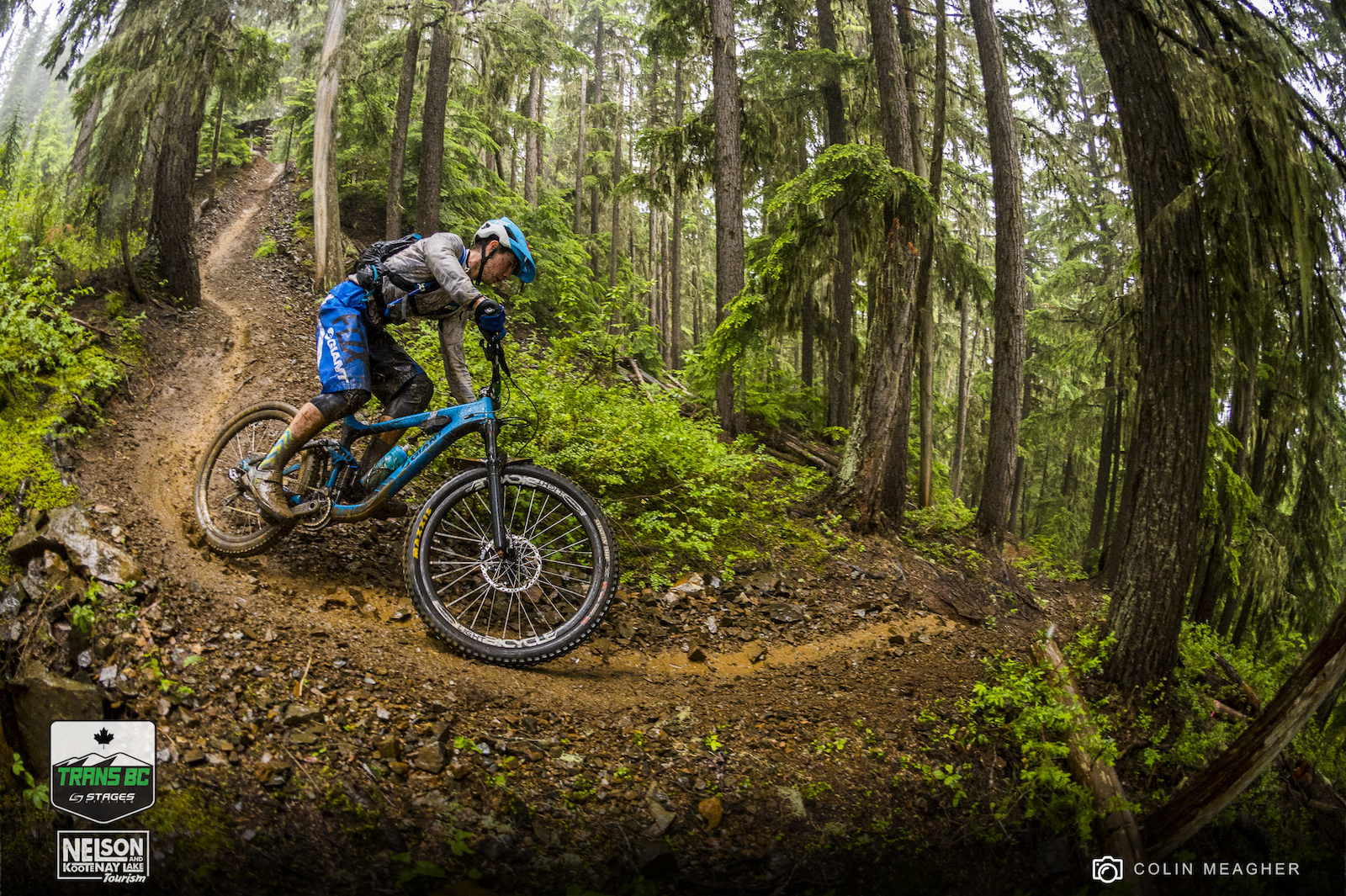 Ben Friel feeling at home with the wet- the UK has pretty much been underwater all summer long. 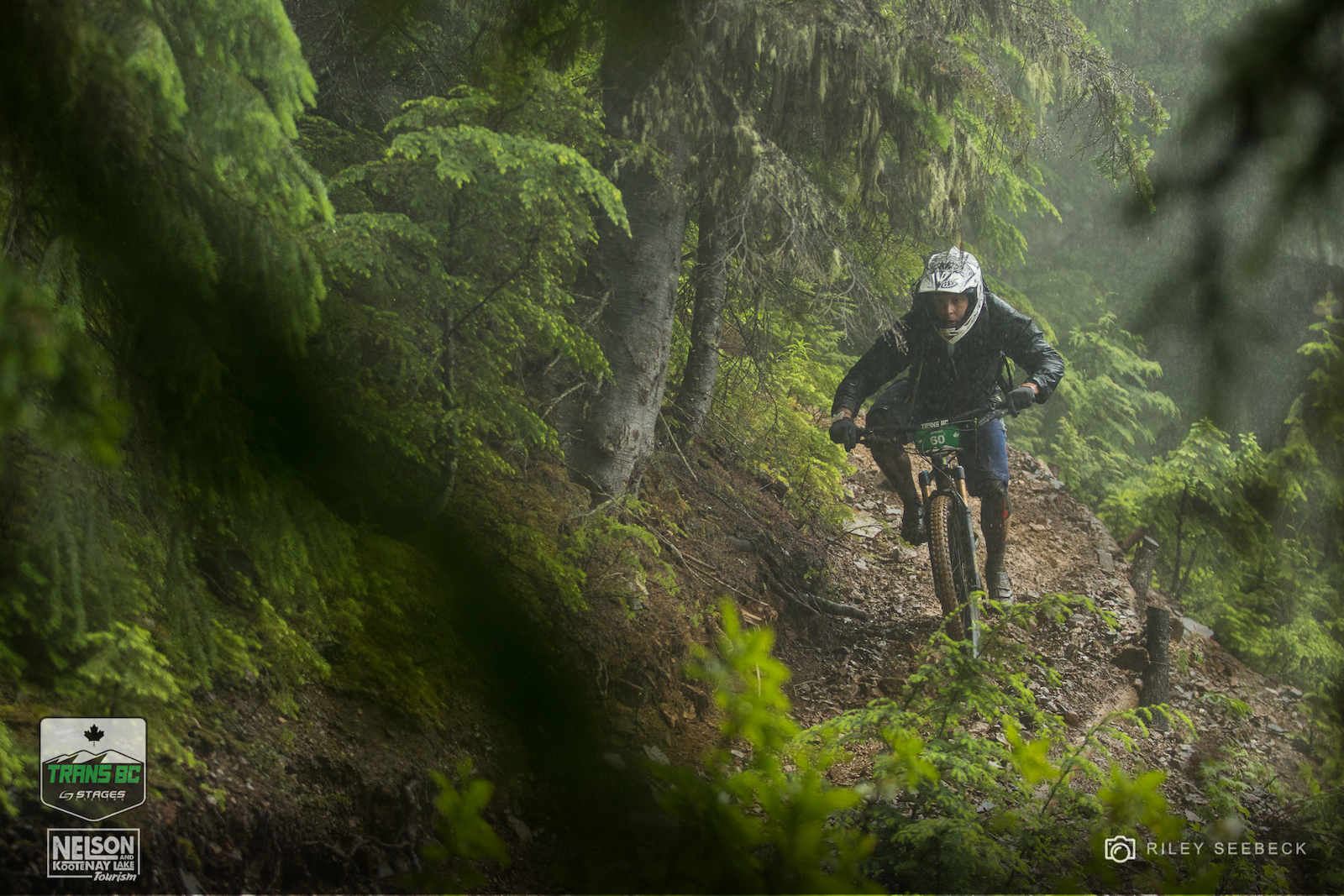 A special thanks to Nelson Kootenay Lake Tourism and Kootenay Columbia Trails Society (KCTS) supporting the Trans BC Enduro in Nelson, B.C. Stay tuned to regular updates on Facebook and Instagram and core online media outlets throughout the week. Hashtag your photos #transbcenduro to make their way onto the live stream of the Trans BC’s Media HQ. For more information email megan@ridingbc.com or visit www.transbcenduro.com. 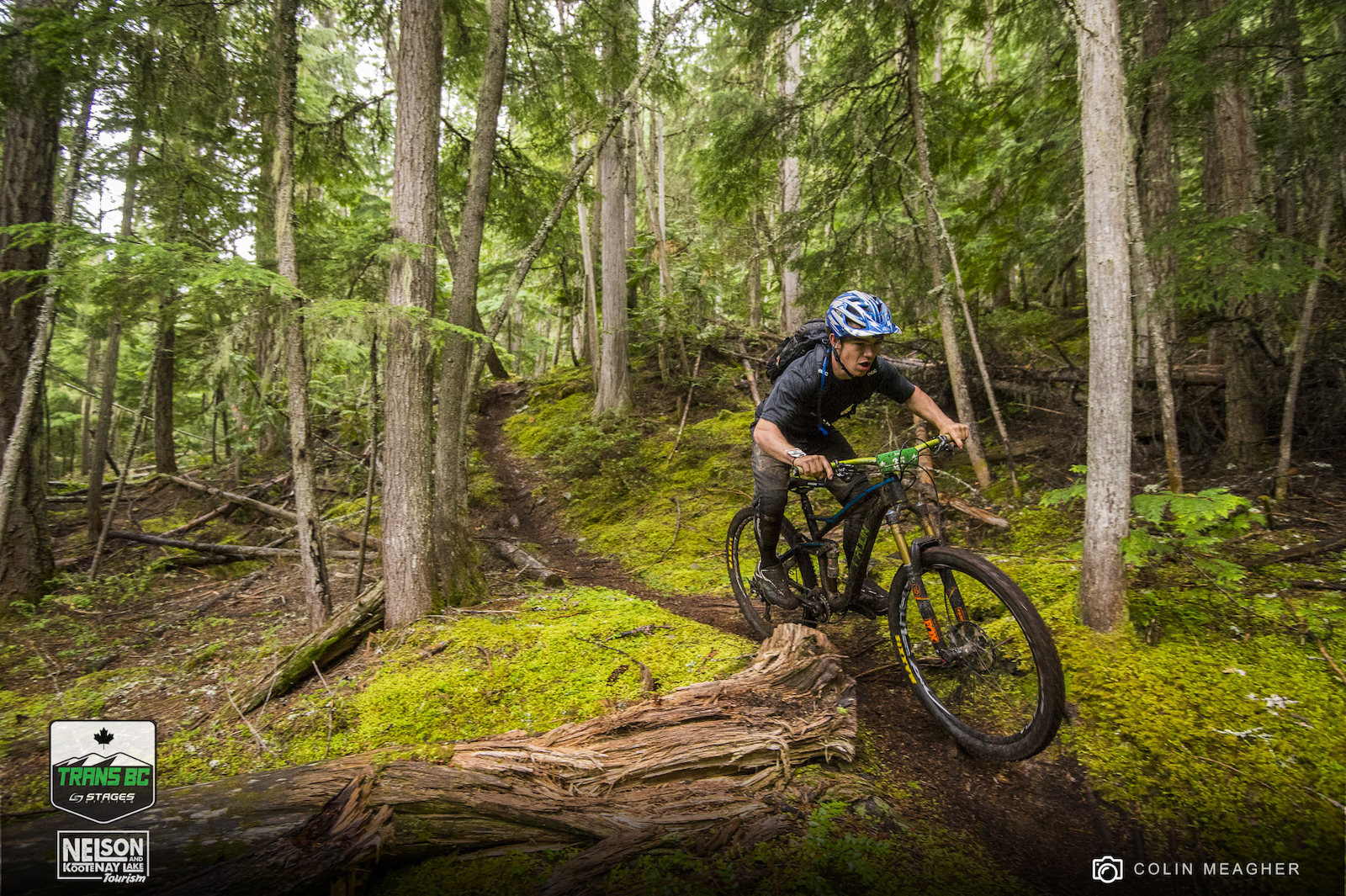 Joe Buck again considering that move to BC.
DAY 5 RESULTS

About Megan Rose— Megan has been riding and racing bikes all over the world for 13 years and organizing bike events for the past six years. She splits her time between British Columbia, Canada and New Zealand, running the BC Enduro Series and the new Trans BC for 2016, and running the Trans NZ race. Over the past two years, Megan has personally races in over 24 enduro races, timed over 58 days worth of enduro races, and personally organized 22 enduro races. Megan and her team look forward to bringing you the best of the best from all of these perspectives.

About Stages Cycling— Stages Cycling LLC, based in Boulder, CO, launched the Stages Power meter at Interbike in September 2012. The new Stages Power meter immediately made waves for the power measurement category in all disciplines of cycling, including enduro, where the sport's top pros collect and trust its data for training and racing. Since the brand has expanded into the commercial and home fitness category with the SC3 commercial indoor cycling bike, with groundbreaking features including; CarbonGlyde featuring Gates CarbonDrive, SprintShift, FitLoc, RoadBar and, of course, the Stages Power meter. More information at stagescycling.com. 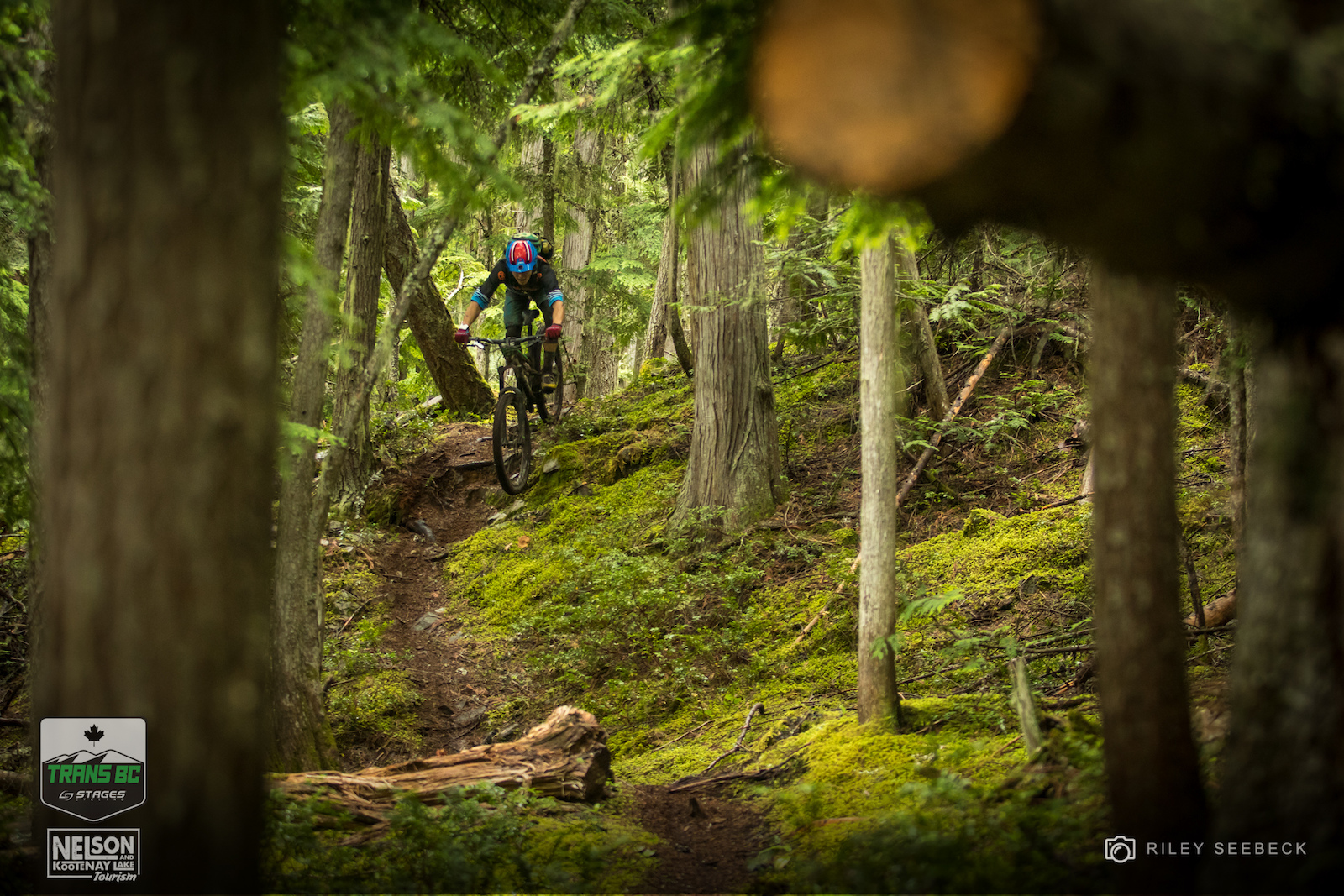 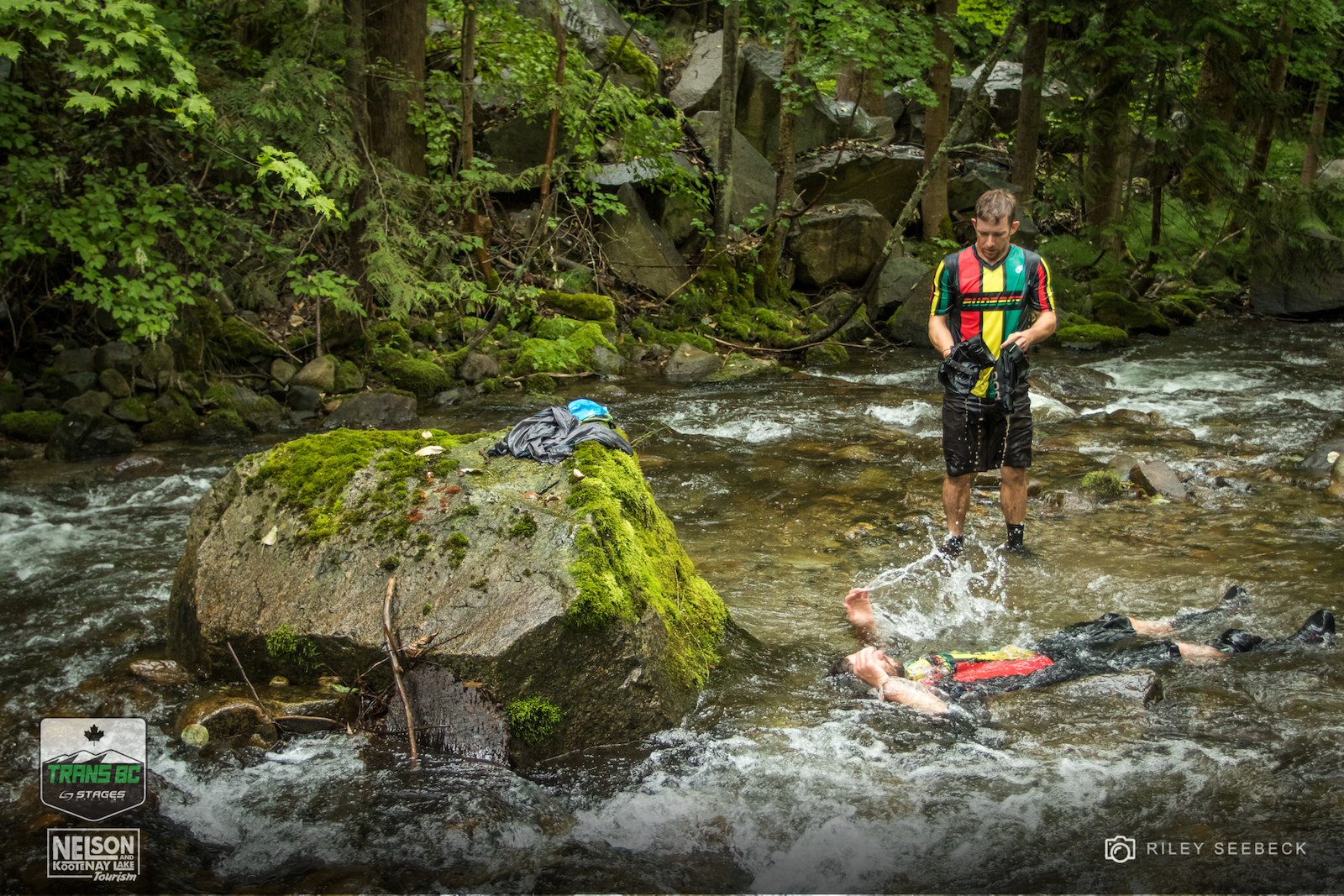 Sshredder (Jul 10, 2016 at 8:47)
I love the way the forest looks when its saturated. Shots are amazing. Thank god for modern SLR s than can shoot in very high ISO s.

gonecoastal (Jul 9, 2016 at 23:12)
@sonyalooney Are you running six or seven cables on your bars? Being a PB commentator means I can't count past five!