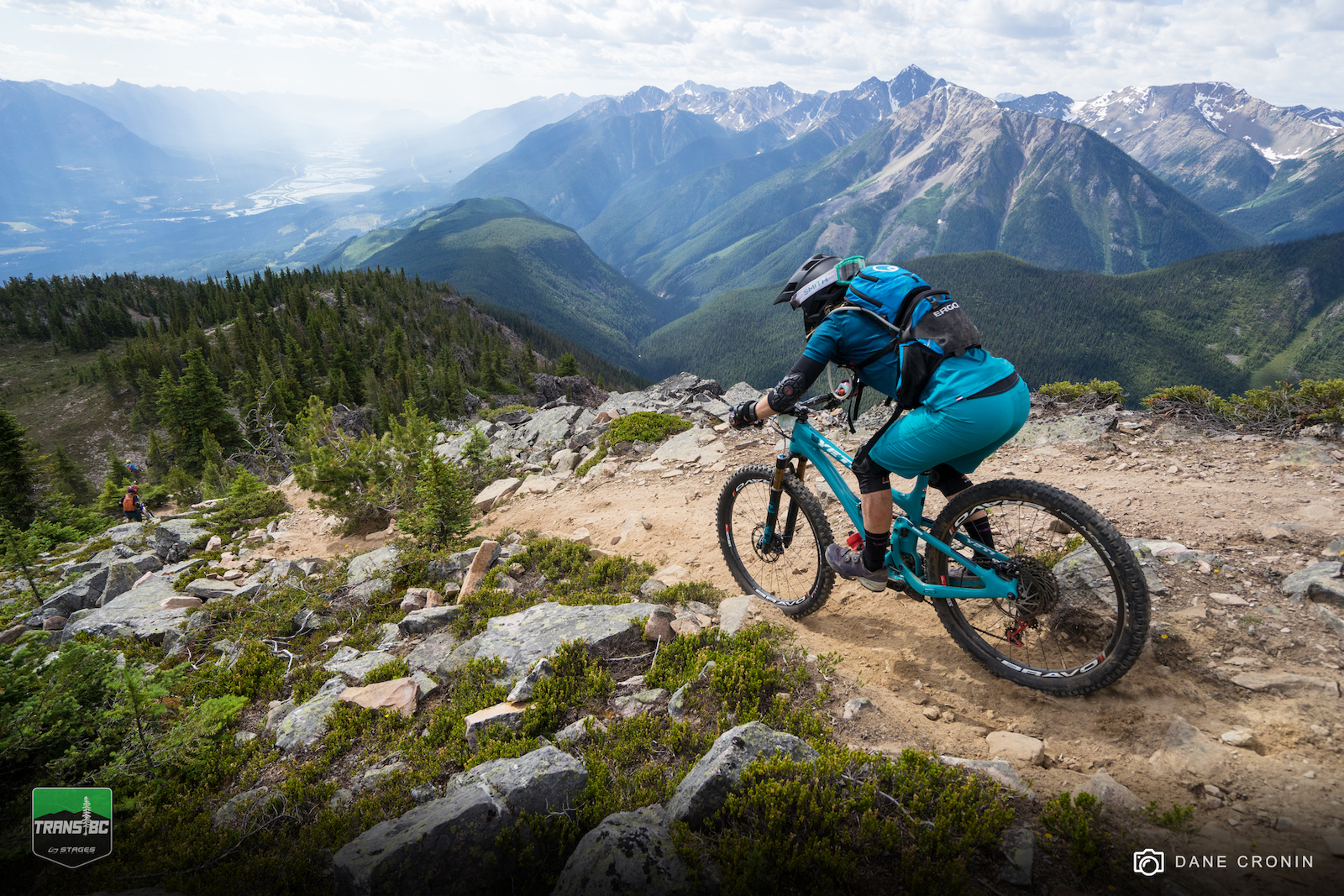 Trans BC Enduro
Day Four Golden
Day Four of the Trans BC Enduro presented by Stages Cycling brought a little reprieve to the troops— in duration on the bike, meters climbed, and endless vistas from the ridgeline along the Purcell’s Dogtooth Range. Fatigue from the first half of the race melted away, and riders’ souls were rejuvenated before the final push in Revelstoke. 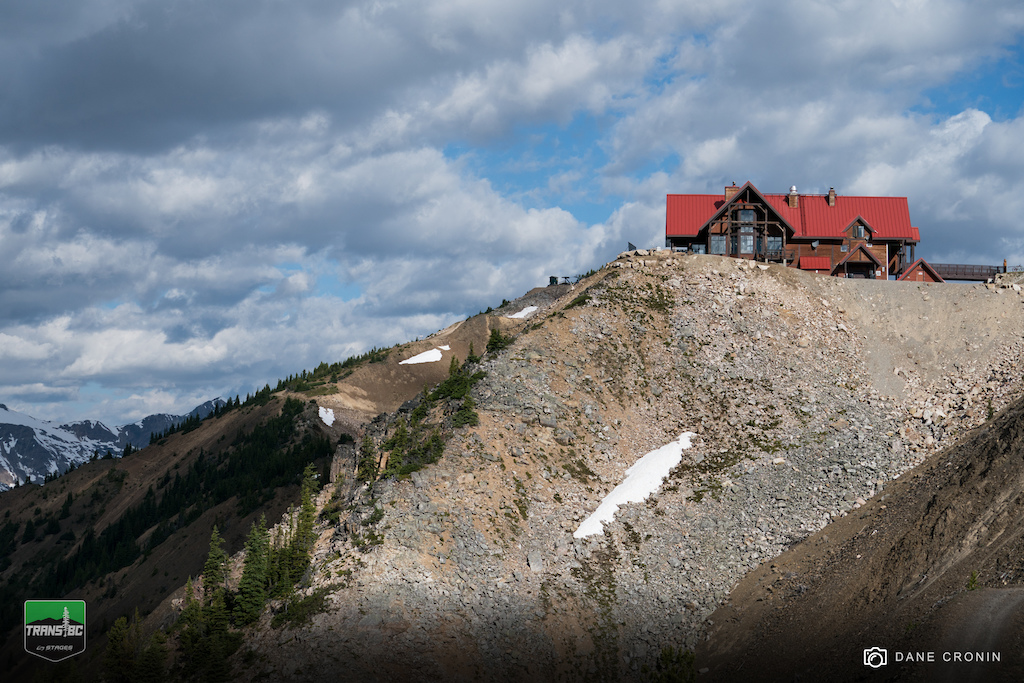 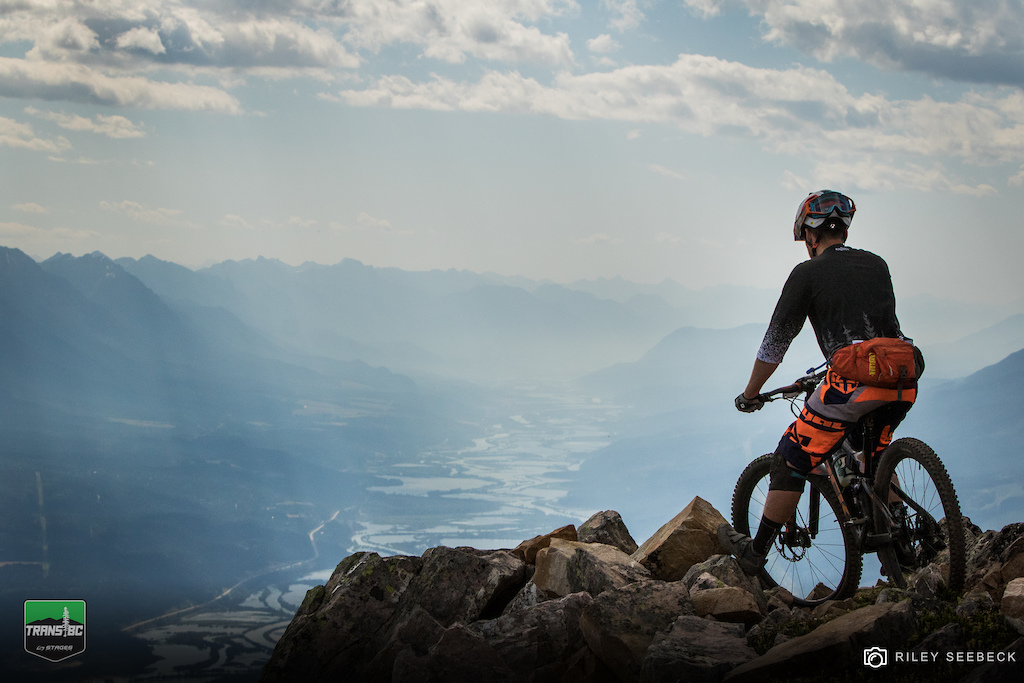 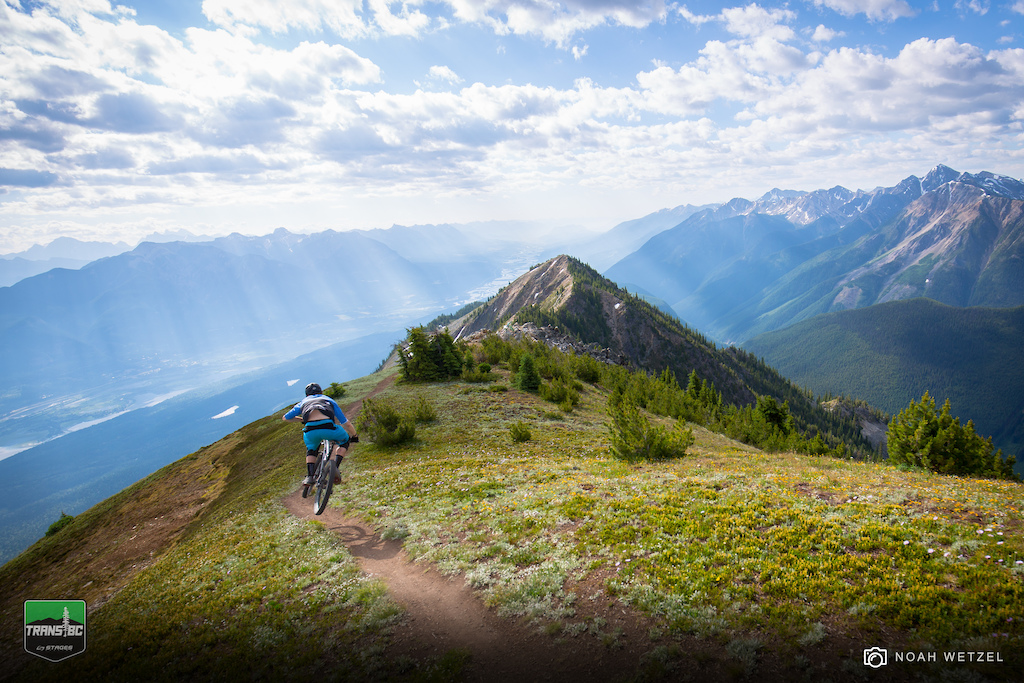 Day 4 of the Trans BC Enduro in Golden B.C. 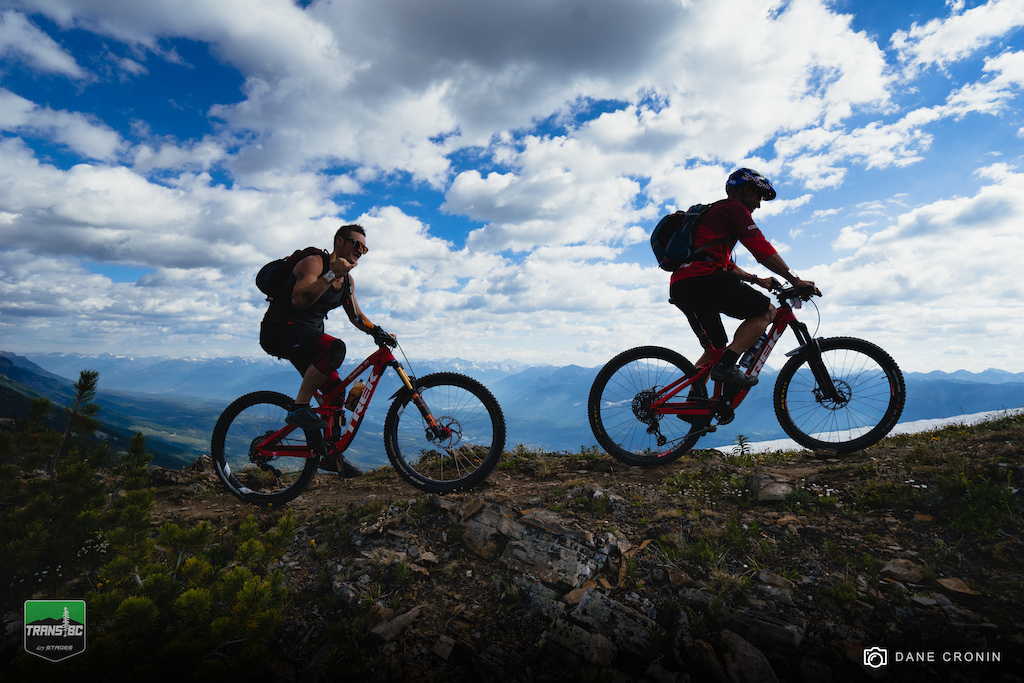 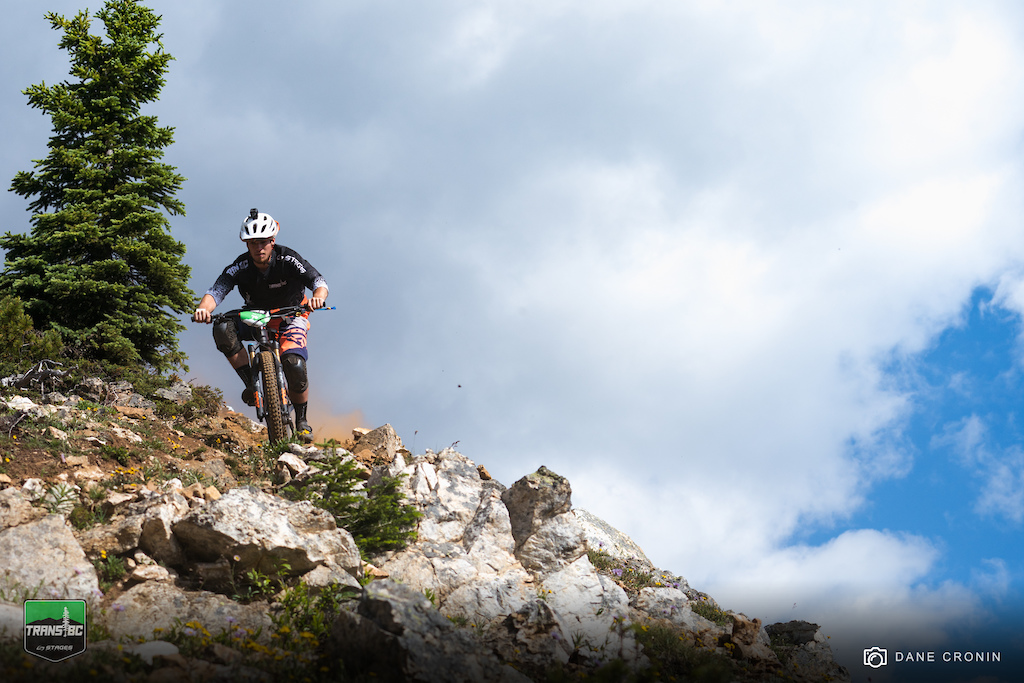 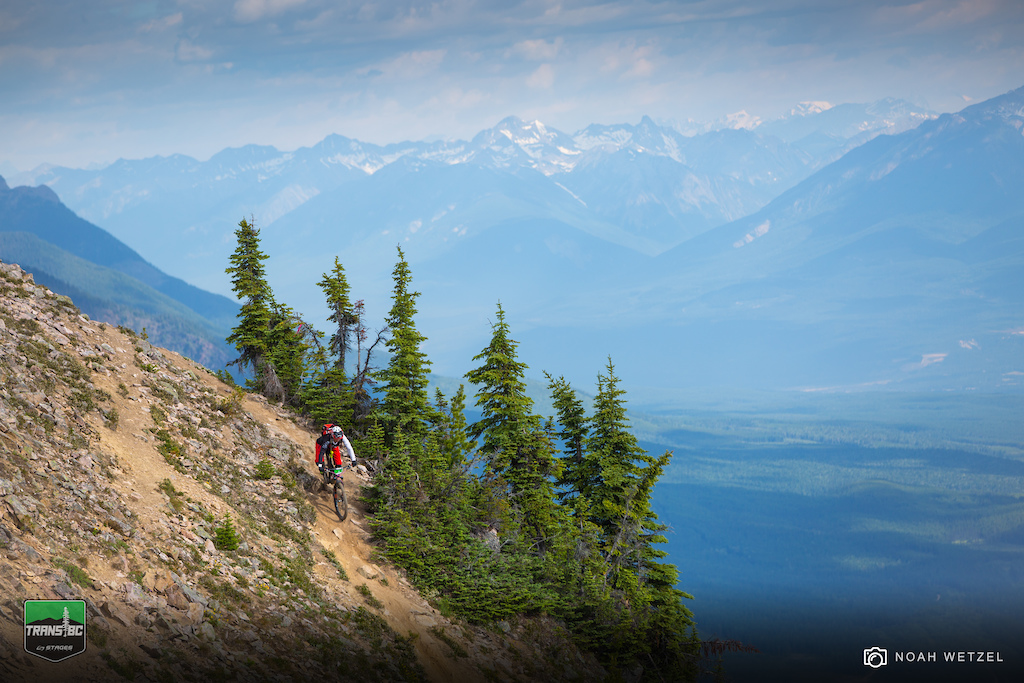 Day 4 of the Trans BC Enduro in Golden B.C.
After Whistler’s 5,020’ vertical drop, Kicking Horse Resort provides the second longest descent in Canada for mountain biking at 4,133 feet. After waving to Boo the grizzly bear from the Golden Eagle Gondola, racers picked their way across T2 along Terminator Ridge with bikes hoisted onto backs, and slow steady steps up armored rock cut into the mountainside. 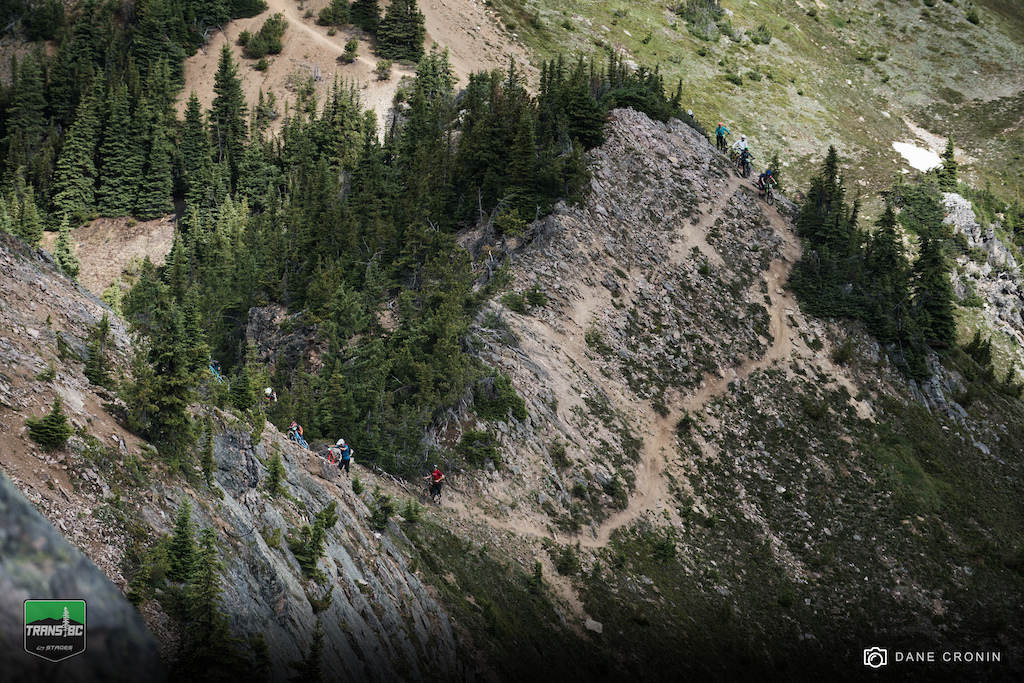 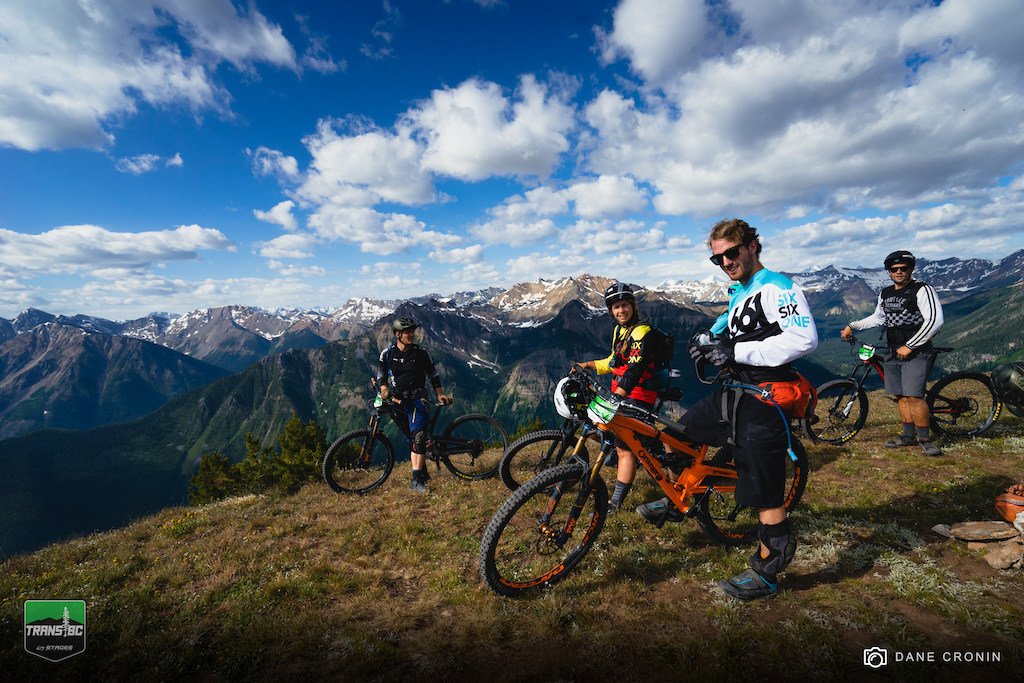 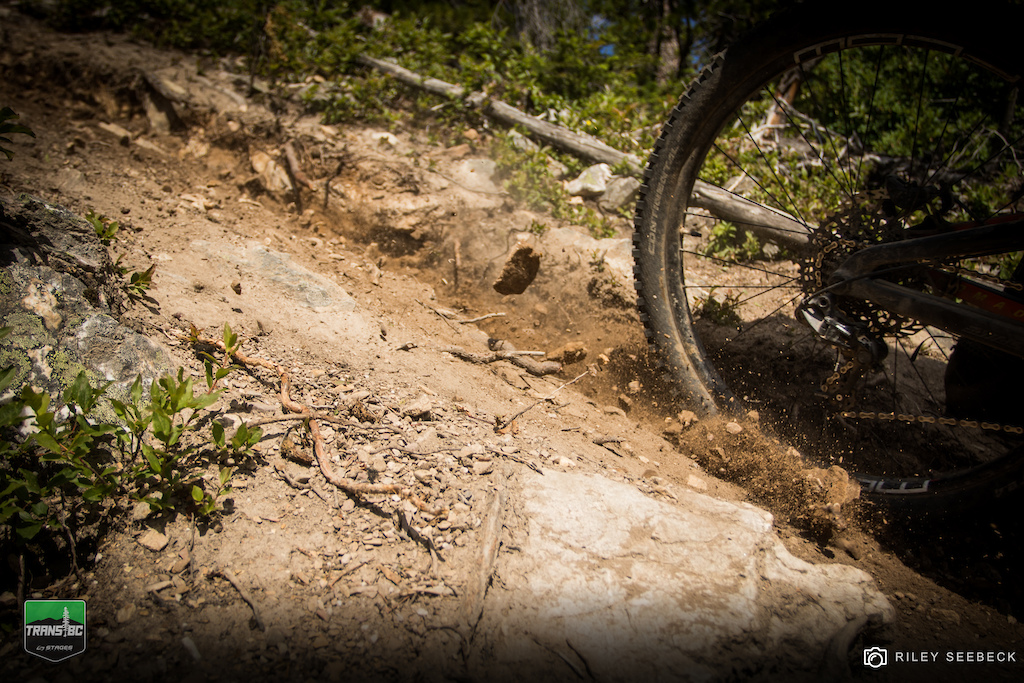 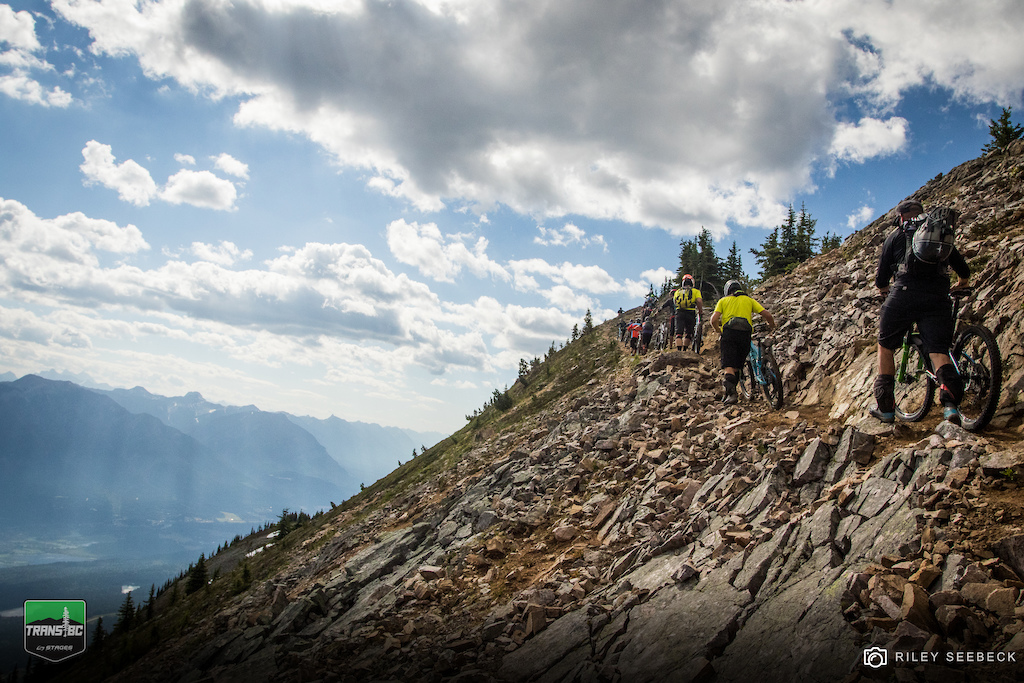 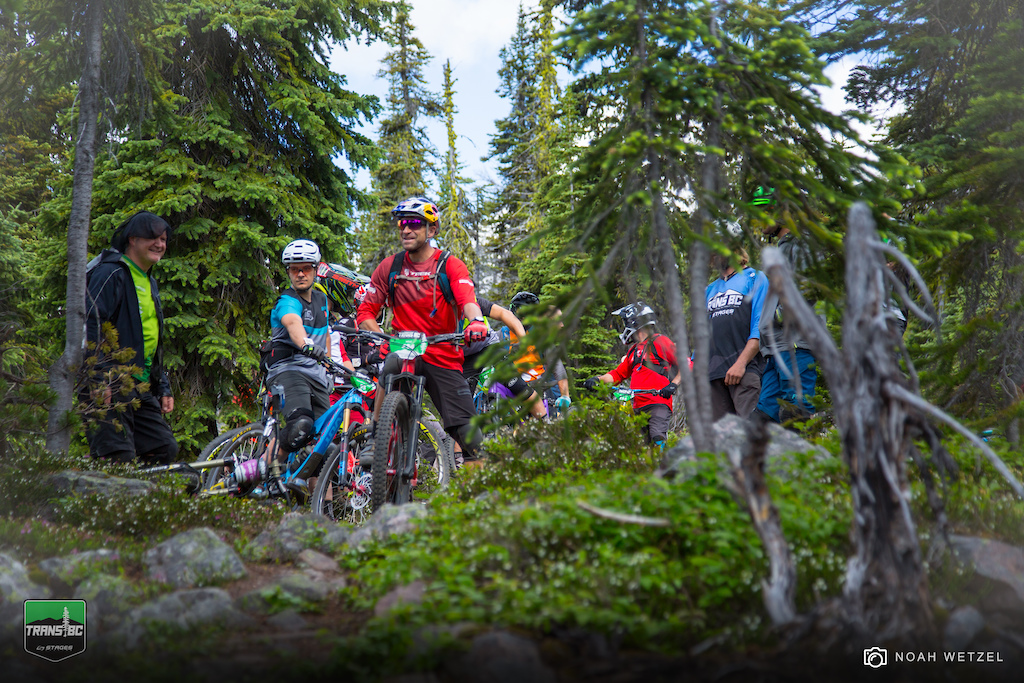 Friendly vibes at the Stage 1 start on Day 4 of the Trans BC Enduro in Golden B.C.
Stage one presented a jigsaw puzzle of sharp shelf rocks to small g-outs down T4, a trail that doesn’t see much traffic throughout the year. Megan Rose, founder and race director of the Trans BC Enduro found the trail about four years ago in a much different state. 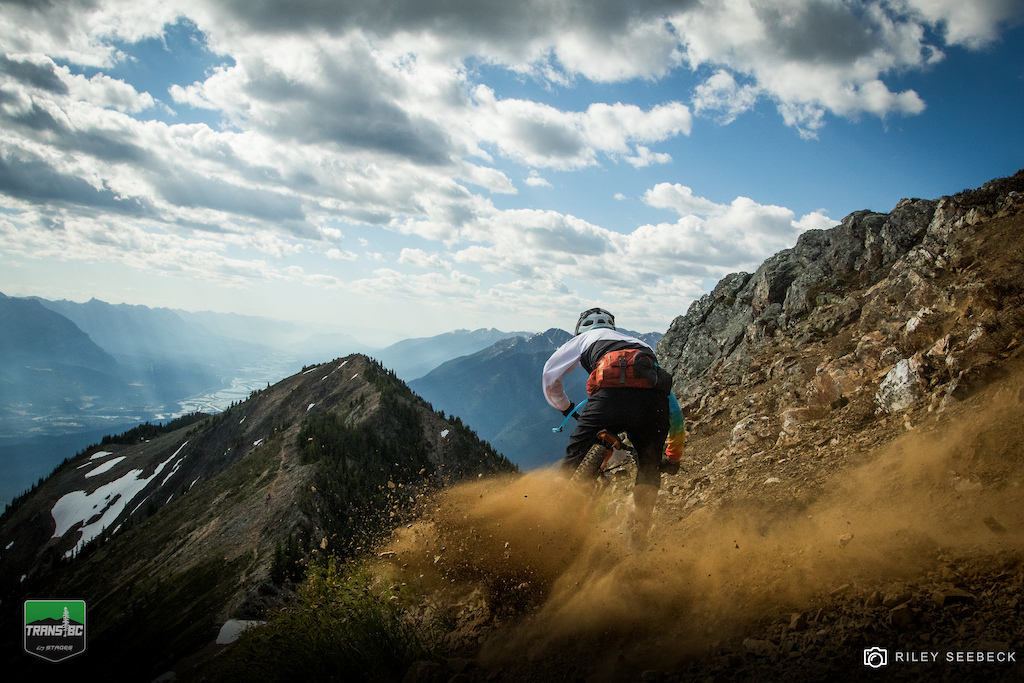 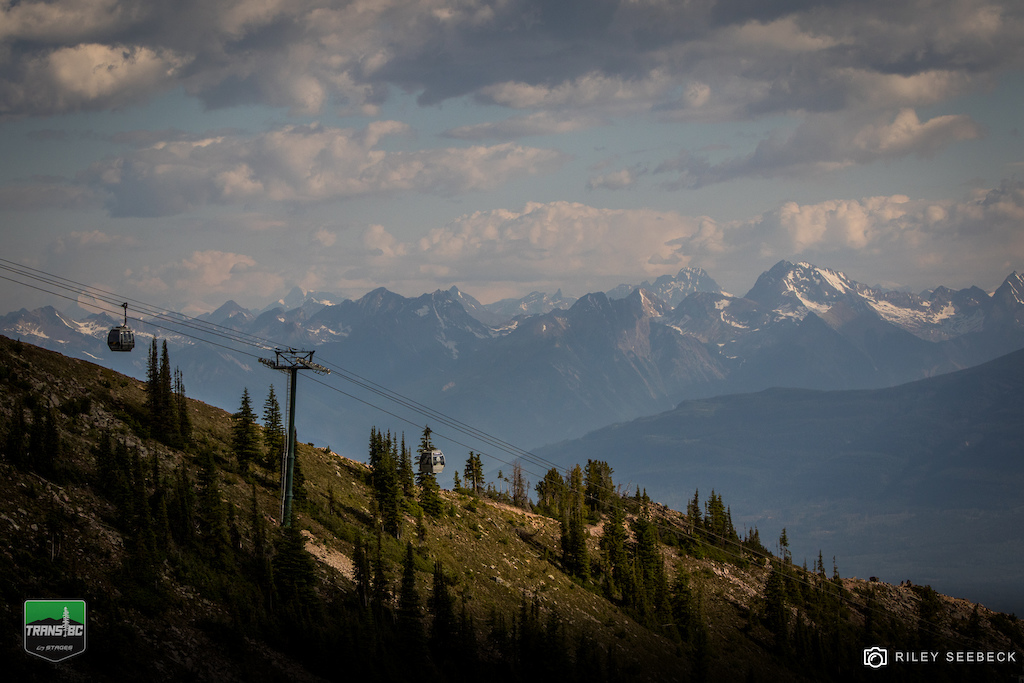 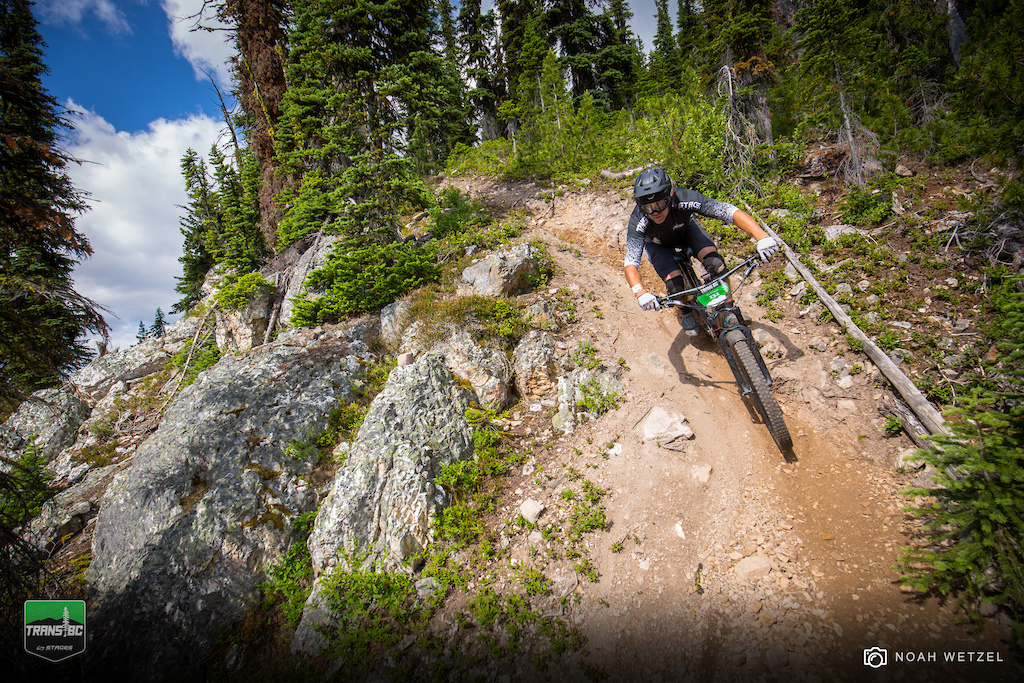 Stage one on day four of the Trans BC Enduro in Golden B.C.
Stage one was anticipated to be a four to six minute stage at 1.3 kilometers and 460m of descending, but Jerome Clementz (FRA) Open Men took the fastest time of the day with a 7:55. 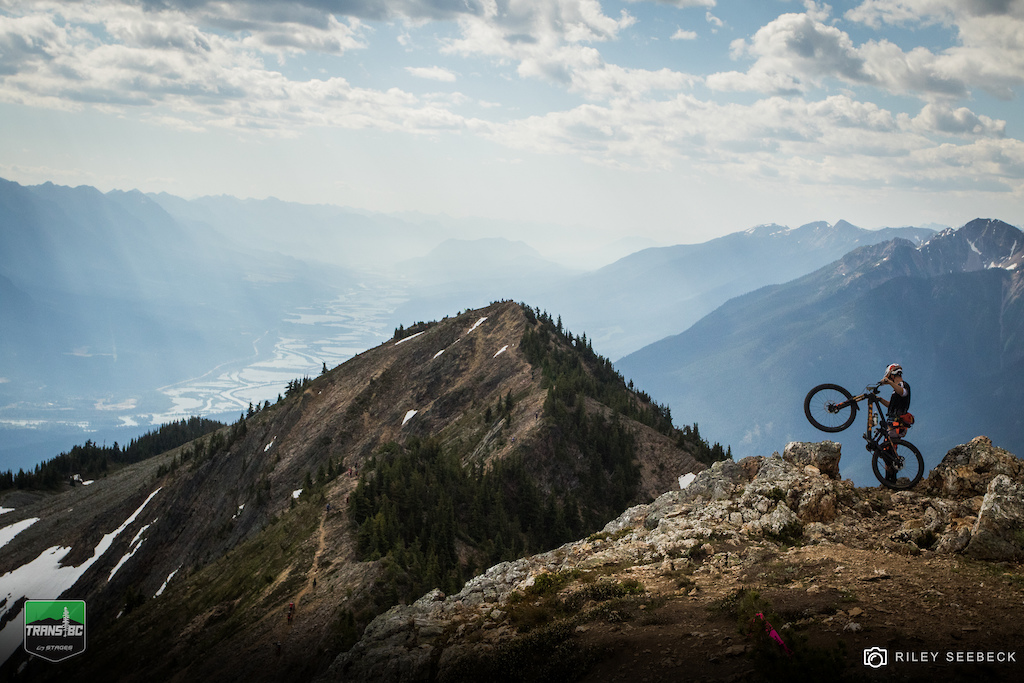 The transfer to stage two continued along the canopied ridgeline for a second drop on T4— a quick 3-minute stage through the trees and an open meadow, to connect back into civilization and sustenance at the aid station. After refueling, the local’s gem awaited riders just around the corner on LSD and Canyon Creek. Named after the peak across the valley— Little Sir Donald— LSD winds through a native cedar forest with wooden features, lots of loam and a few drops to keep everyone on their toes. 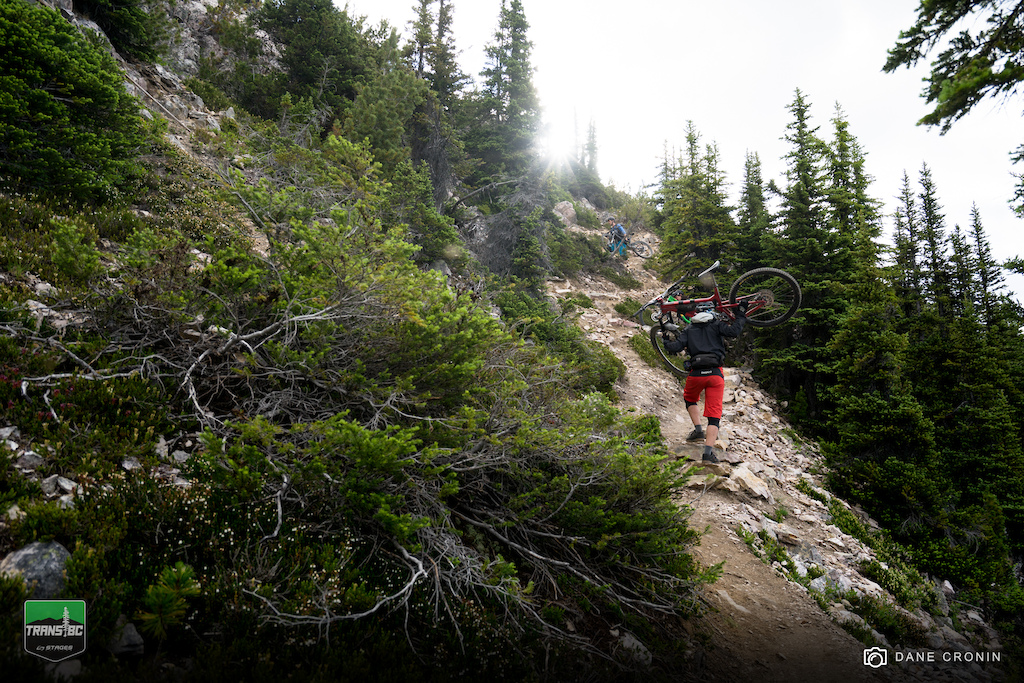 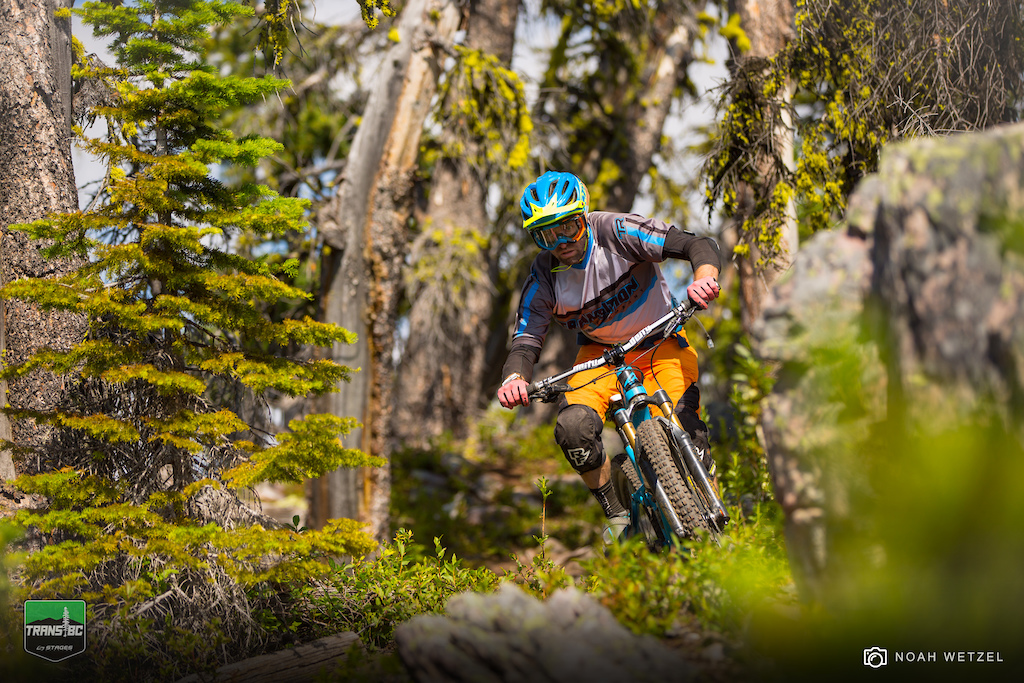 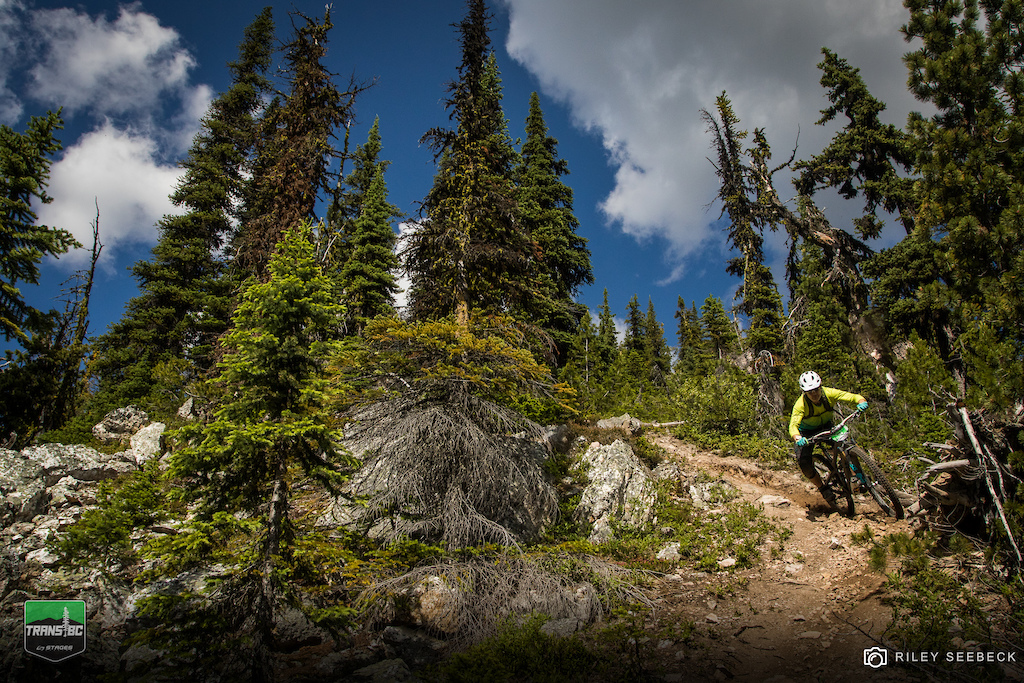 Dipping straight into Canyon Creek, a signature trail that runs along the edge of the canyon with a raging creek 200m below, double track gave riders plenty of room to check out the views before gaining speed down the wide-open trail.

Blow the turn and you discover what a 300 meter sender feels like. #stagescycling #transbcenduro2017 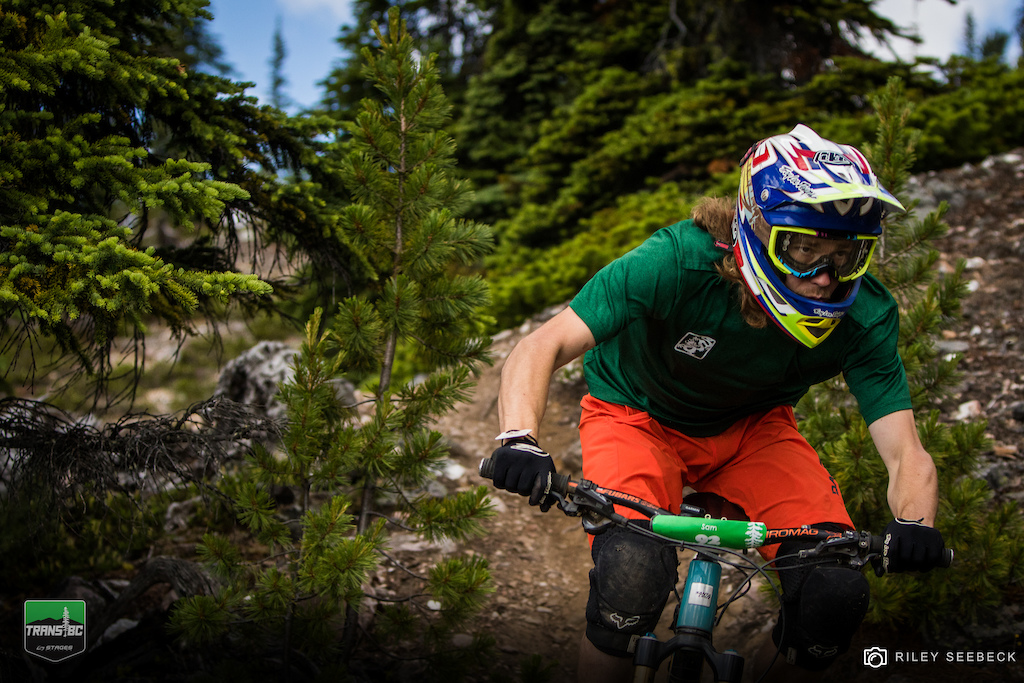 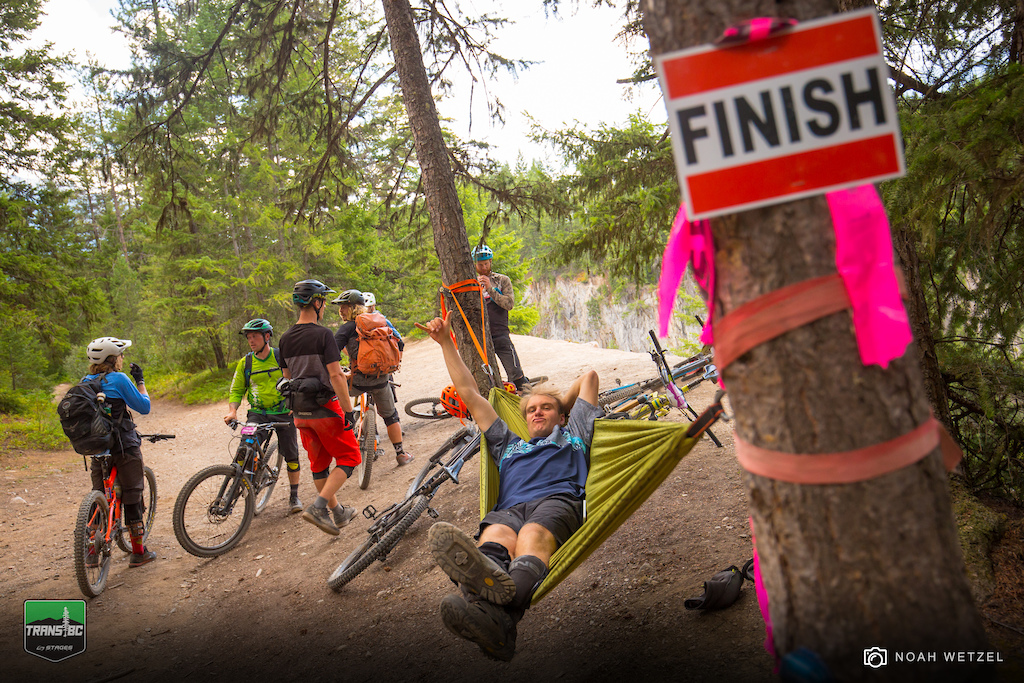 Let's take things down a notch. Stage 3 finish on Day 4 of the Trans BC Enduro in Golden B.C.
The transition through Moonrackers meandered through the roots of cross country mountain biking in Golden, B.C. from the late 1990’s when old Nordic ski trails were resurrected into mountain bike trails. Smooth, flowy singletrack passed by Cedar Lake with a Canadian-built rope swing that enticed some of the volunteers to abandon their jobs and play in the water. True to form, the last stage was a ripping run down Gold Rush Descent and a short pedal back to town where cold kegs were tapped in preparation for the rush of racers who were ready to party at 2 p.m. after the shortest day of the week— 30 kilometers, 727m of climbing and 2,036m of descending. 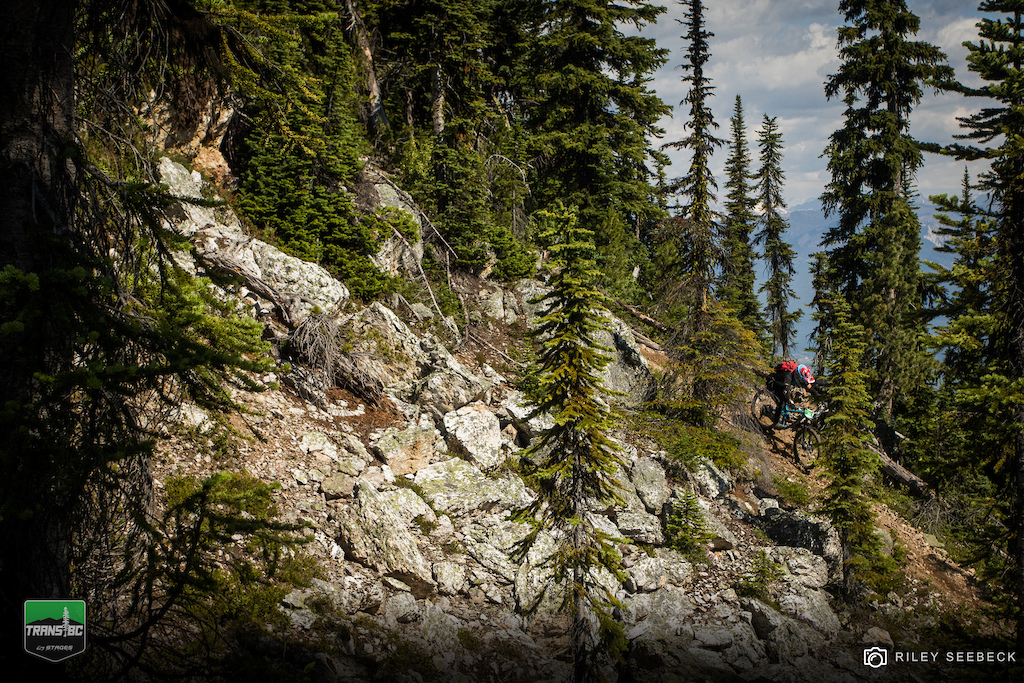 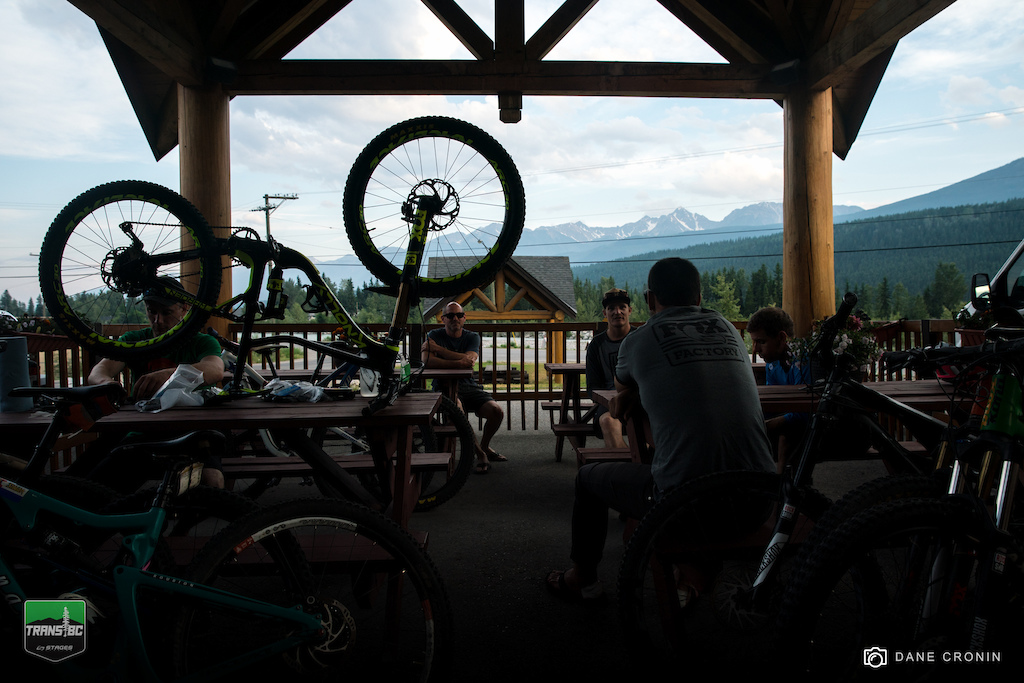 Jerome Clementz extended his lead to 50 seconds ahead of Remi Gauvin (CAN) after day four in Open Men. Pete Ostroski (USA) tied with Gauvin for the day and solidified his third place overall by 1:18. Casey Brown (CAN) continues her consistent streak, winning three out of four stages. Brown keeps a strong lead over ALN (CAN) and Emily Slaco (CAN), before heading onto home turf for the final two days. And let’s not forget the Masters Men 40+ category. According to Patterson, it has been an EWS caliber field out there. Rene Wildhaber (SUI) has been leading the charge ahead of Cesar Gairin (ESP) and Rich Marshal (Golden, B.C.) throughout the week.

Full results can be found HERE. Check out video action from Day 3 — Golden.

The Trans BC Enduro jumps over to Revelstoke for the Rose’s selected “soul crusher day”. Bike, bodies, and spirits have been bandaged together all week. Stay tuned to Pinkbike to see what happens on Day 5 of the Trans BC Enduro. Hashtag your photos #transbcenduro to make their way onto the live stream of the Trans BC’s Media HQ. A special thanks to Kazoom, Dissent, Tourism Revelstoke, Revelstoke Mountain Resort, Fernie Alpine Resort, Panorama Ski Resort, Whitetooth Brewing and Monashee Distillery for additional support. The Trans BC operates under BC Singletrack Society, a non-profit society donating over $8000 to the trails and clubs from the 2017 Trans BC Enduro. For more information email megan@ridingbc.com or visit www.transbcenduro.com. 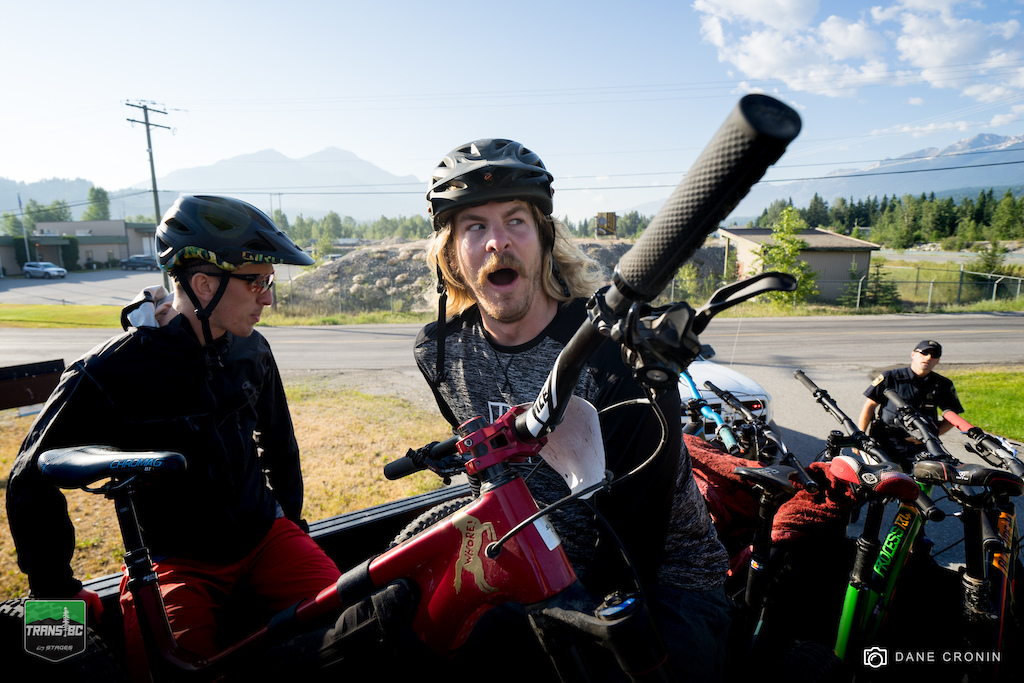 About Megan Rose — Megan has been riding and racing bikes all over the world for 13 years and organizing bike events for the past six years. She splits her time between British Columbia, Canada, and New Zealand, running the BC Enduro Series and the new Trans BC for 2016, and running the Trans NZ race. Over the past two years, Megan has personally raced in over 24 enduro races, timed over 58 days worth of enduro races, and personally organized 22 enduro races. Megan and her team look forward to bringing you the best of the best from all of these perspectives. 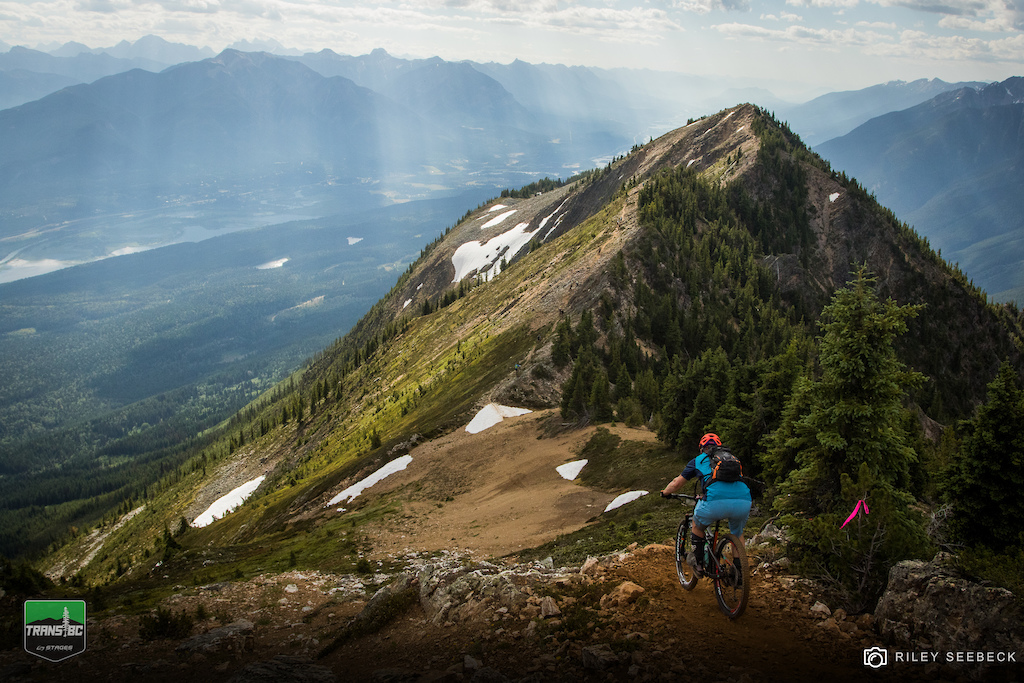 kkse (Jul 14, 2017 at 11:52)
Congratulations Megan Rose and all your team. You have really showcased to the world, that mountain biking in BC is truly epic. It's also a great reminder to some of us who live in this beautiful province to not take what we have for granted. Love living in BC and all it has to offer.

stinkball (Jul 14, 2017 at 9:17)
Welcome to my backyard. Awesome to watch racer come down Gold Rush yesterday with my six year old. Racer got most of the best rides Golden has to offer, but not all. Ya bikes!

(but the music doesn't really do it for me & why is the guy singing "sea otter" .... surely subliminal advertising for a whole different event?)