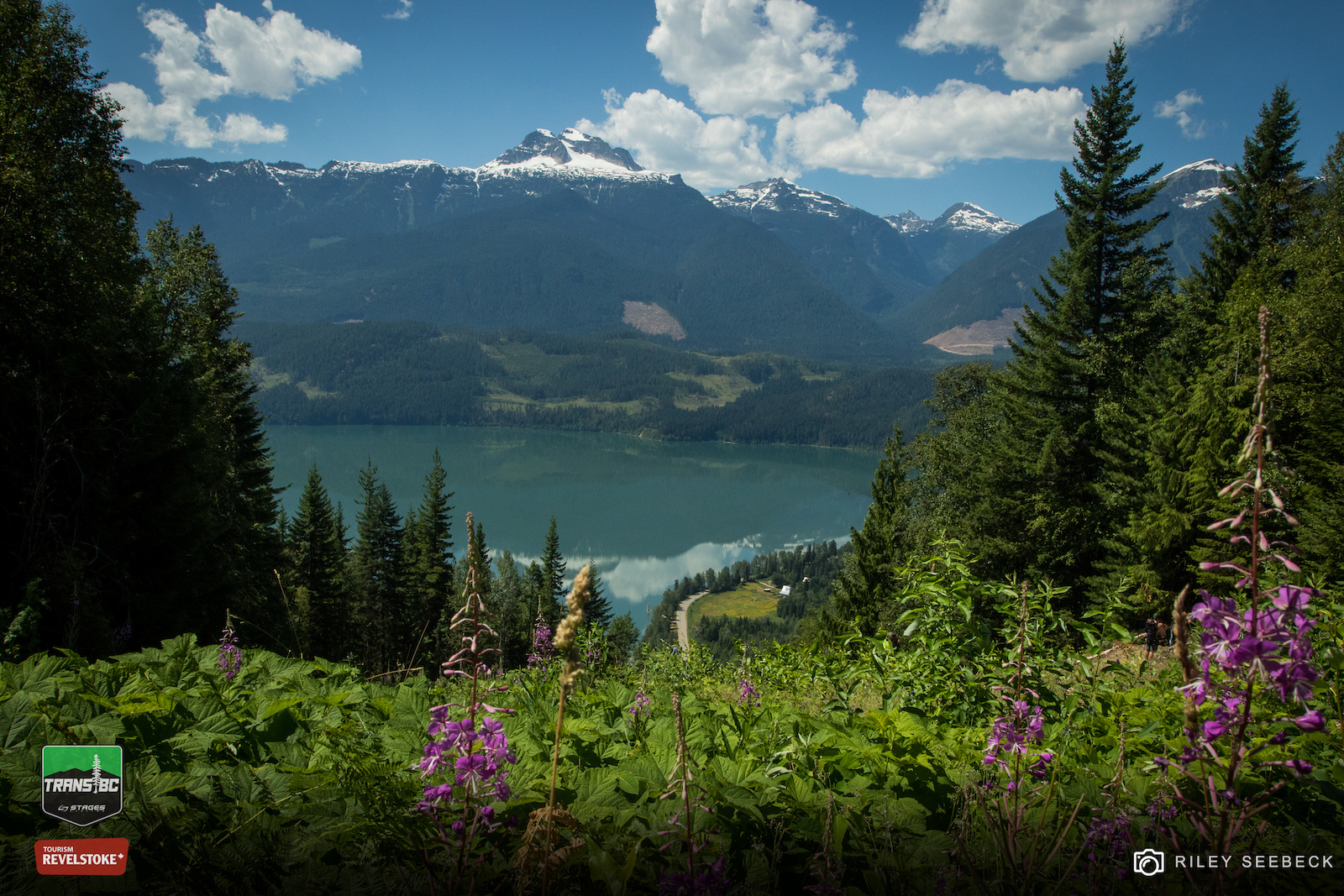 Trans BC Enduro
Day Six Revelstoke
The sixth and final day of the Trans BC Enduro presented by Stages Cycling ended with one of the favoured and most challenging days on-course with three demanding stages in and around Revelstoke Mountain Resort, seamlessly fit together to give riders a fresh perspective of where they’ve come throughout the week. 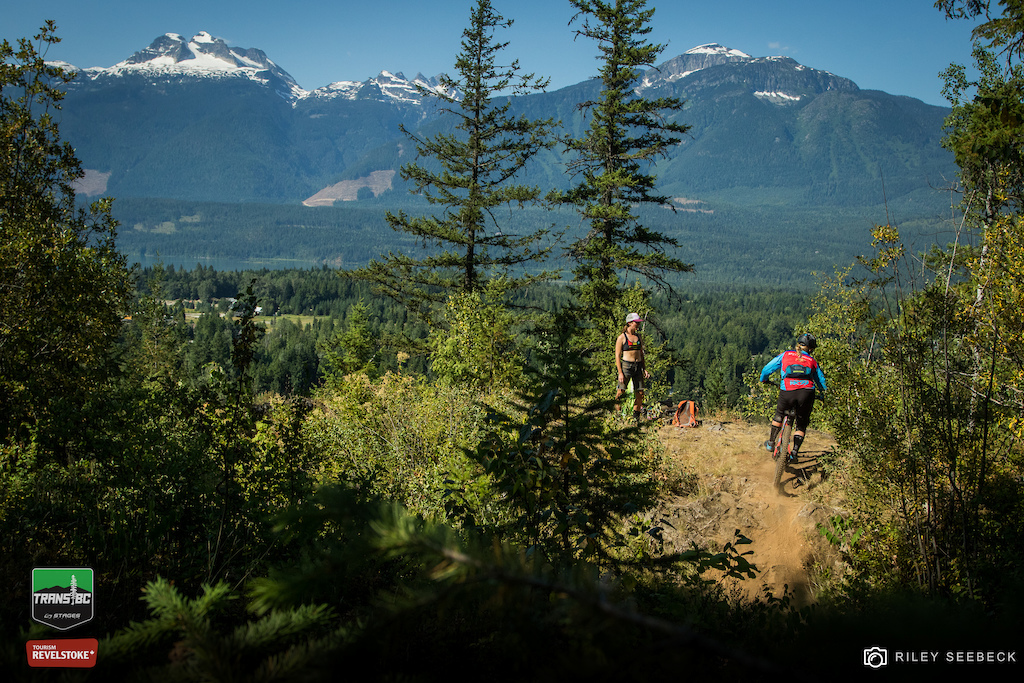 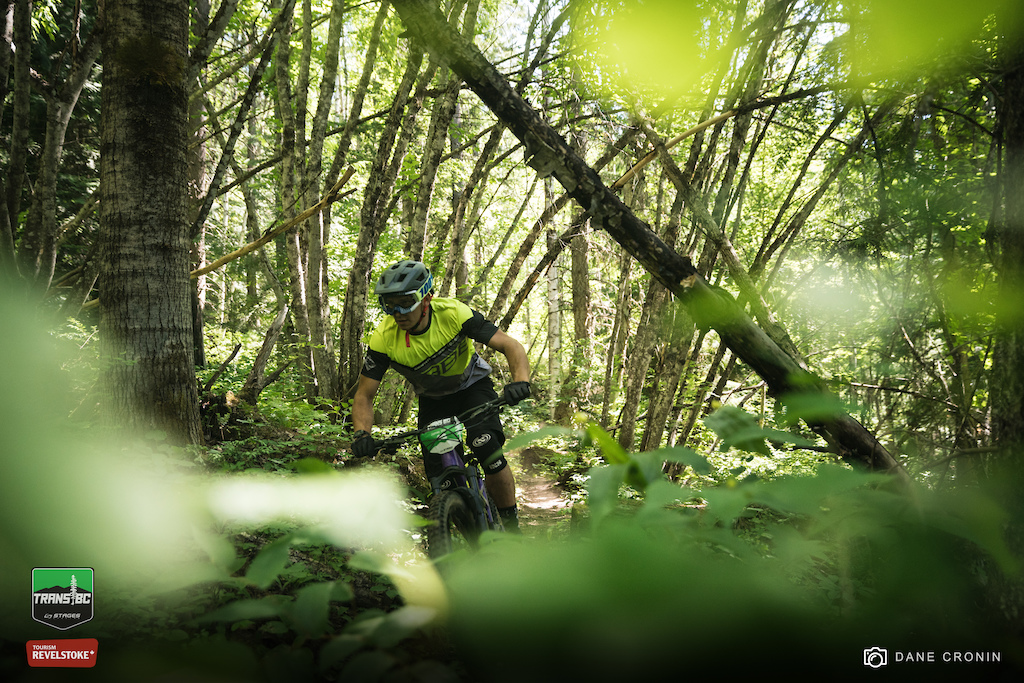 “That was probably the roughest, gnarliest tracks put together in one week than I could ever imagine,” said Flynn George (Golden, Colo.) course marshal and medic. “But the majority were smiling at the end. Every track I was so stoked to ride; they were all my style— rough, steep and weird.” 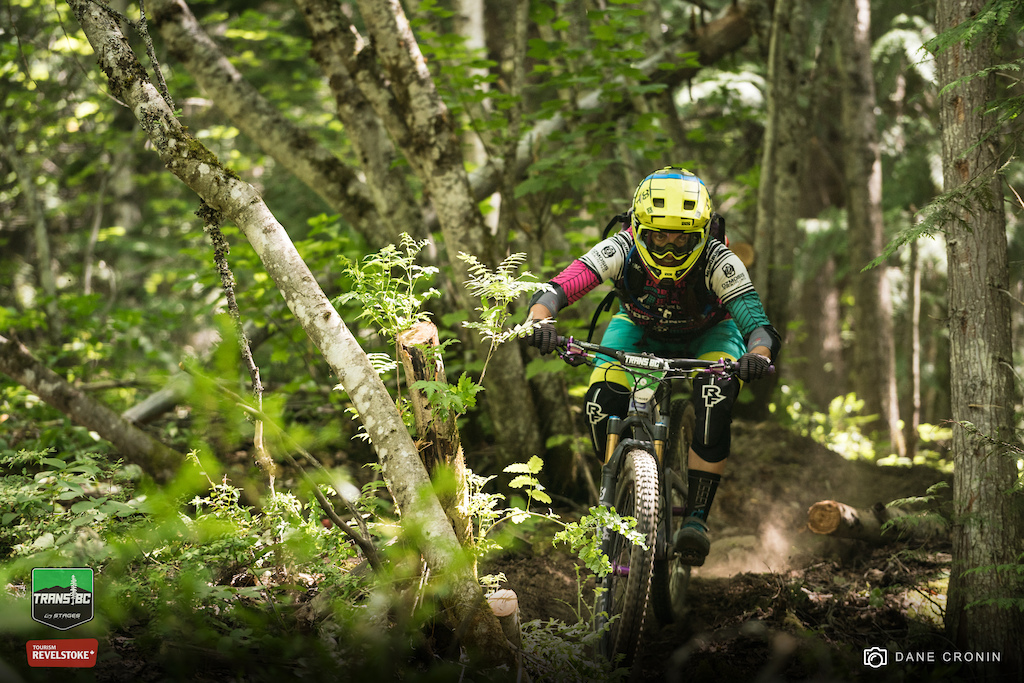 Everyone was treated to an early morning ride up the gondola to Revelation Lodge, for a gourmet breakfast on the deck looking out towards the Monashee Mountains and tracks from the previous day. A waffle station, omelets to order, bacon and sausage, fresh fruit and pastries, filled racers’ plates to the brink. After five consecutive days of riding hard, appetites were endless. 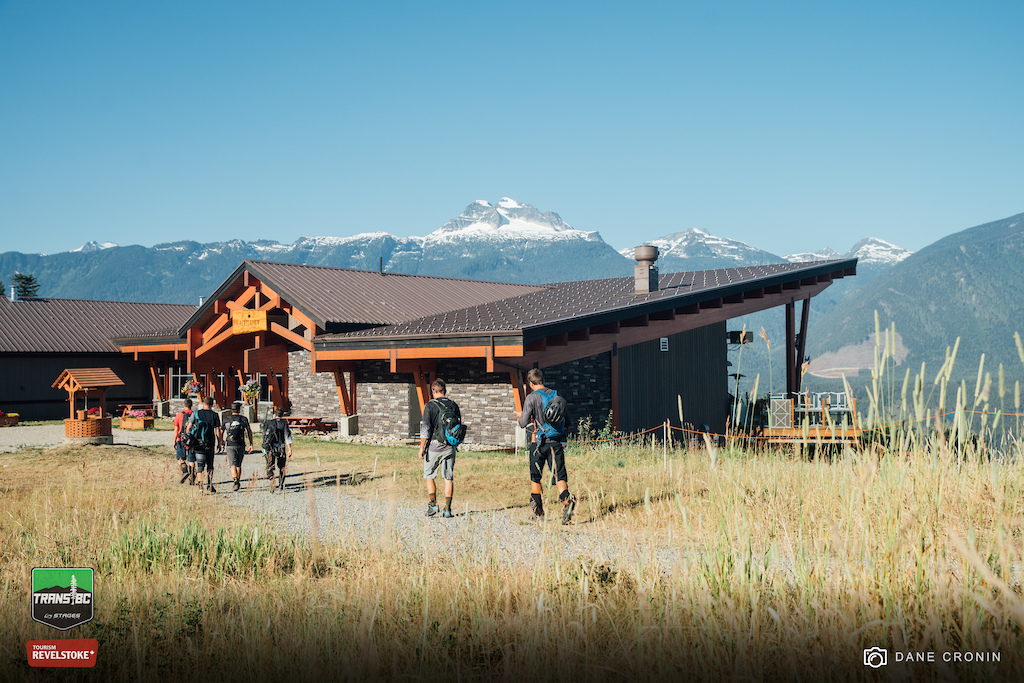 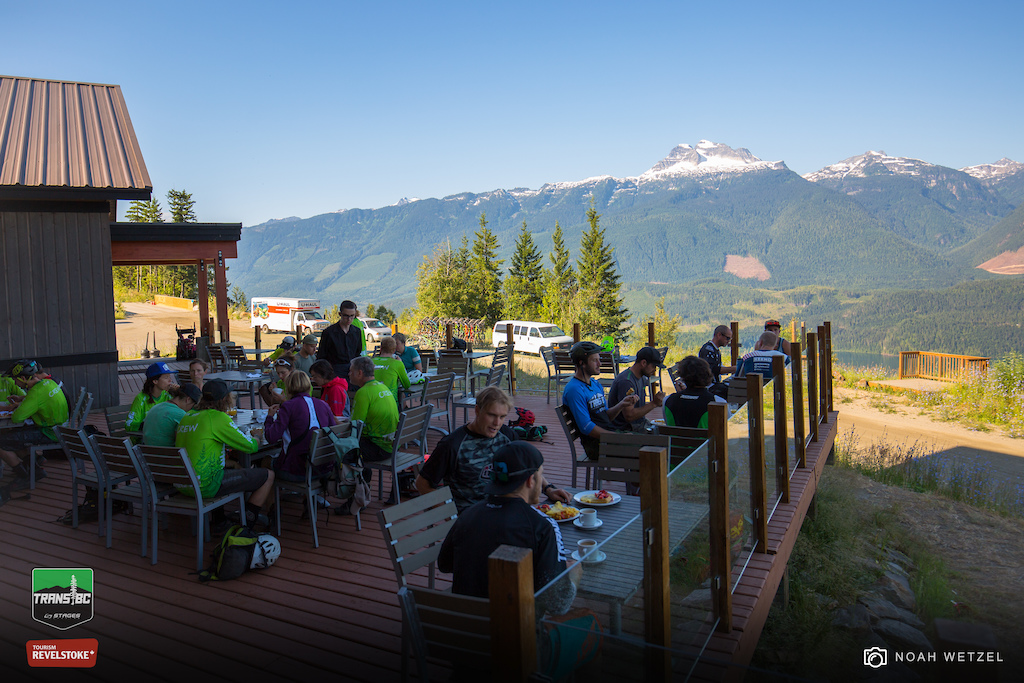 Day 6 of the Trans BC Enduro in Revelstoke B.C.
“The has been the most fun mountain bike event I have ever done— amazing trails and the stoke level kept rising every day. It was well-organized, and all you had to do was ride your bike and have fun,” said Pete Ostroski (Girdwood, AK) Open Men second overall. “This was a great training block coming into the next two Enduro World Series events.” 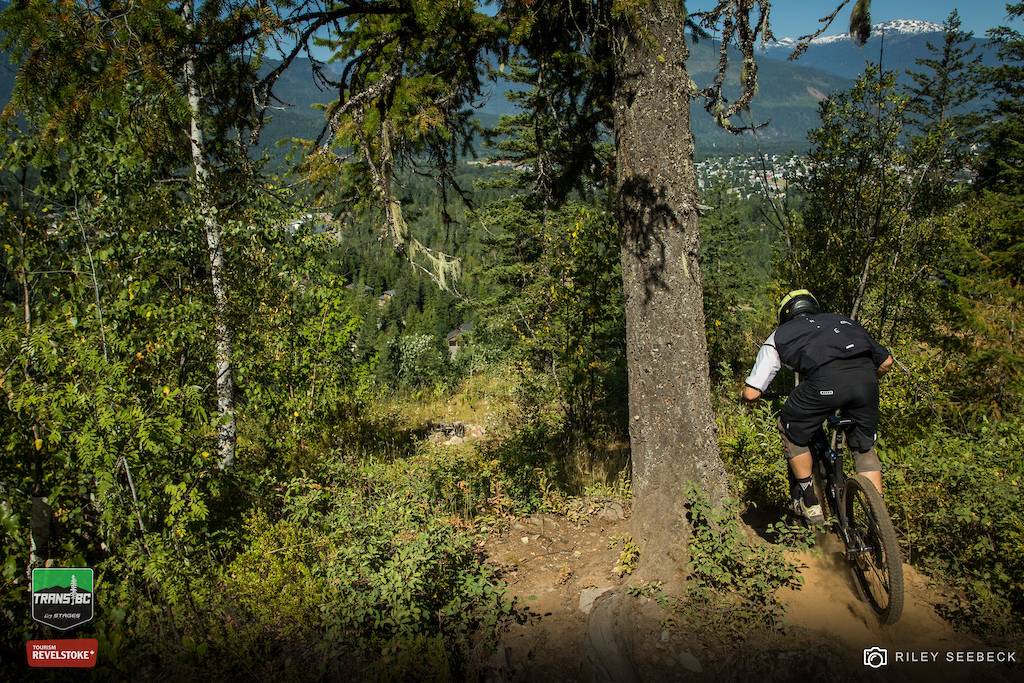 Dropping into town with the view
If you asked around how much climbing it took to get to the next stage, or what dropping in would entail, not many people had a clue. Throughout the week everyone became desensitized to the concept of racing blind. The best source of information was at the start of every stage— an orange half-sheet of paper with distance, estimated time, and meters to descend and climb. When the latter read “0” you knew you were in for a good and/or interesting time. 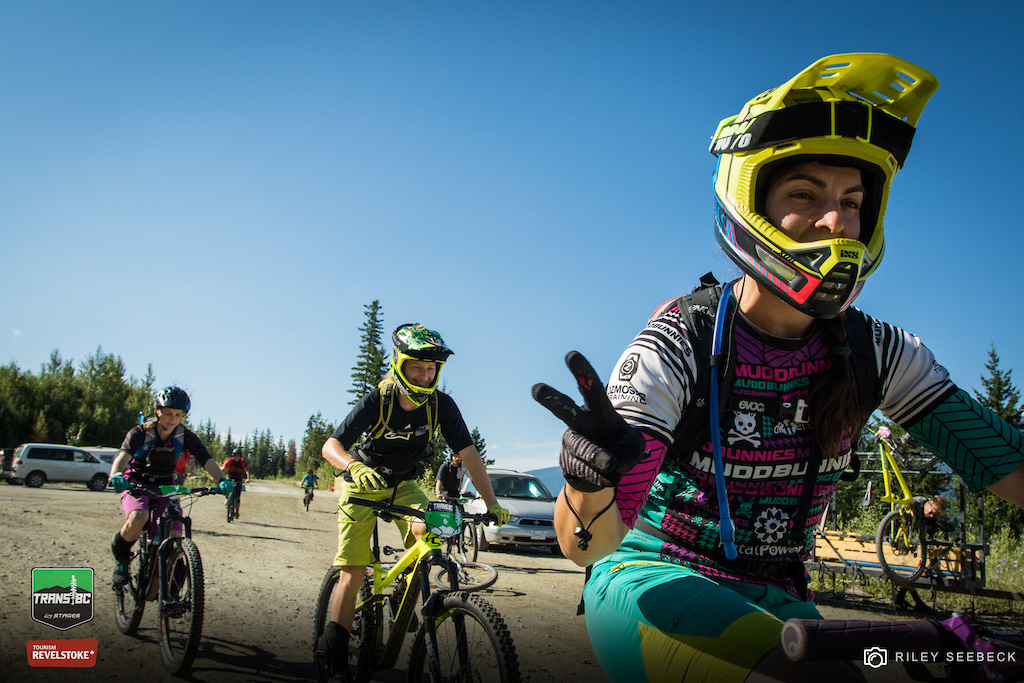 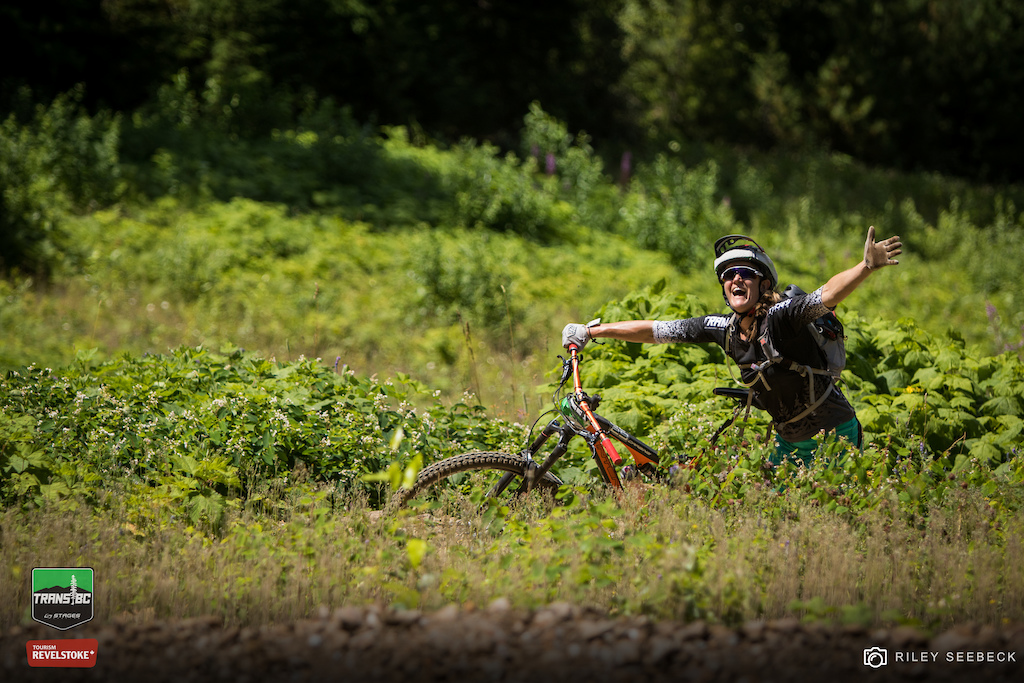 “I liked all of the stages today; they all had a different flavour,” said Mike West (Boulder, Colo.) Open Men. “This year’s event is right at the top of all of the enduro racing that I have done. We got to ride the steepest trails in super dry conditions. For us Colorado folks, it was perfect.” 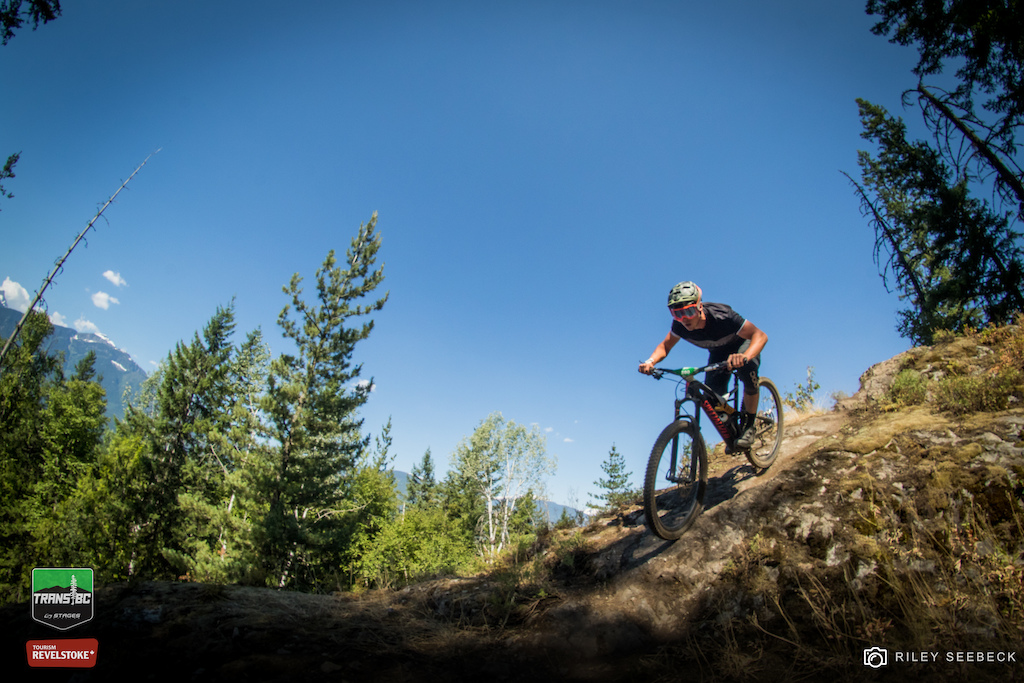 The transition to Stage 1 began to take on characteristics of timed stages with short-lived steep, rooty sections, but enough climbing to know the real descent had yet to come.

Diving straight into Stage 1— Crowbar— made you question your bike handling skills momentarily while maneuvering up and over jigsaw rocks, down a few small rocks slabs, and up sneaker climbs that succeeded awkward corners. “The first stage was actually my favorite— it was janky with good sight lines, so it was pretty fun to ride down,” Ostroski said. 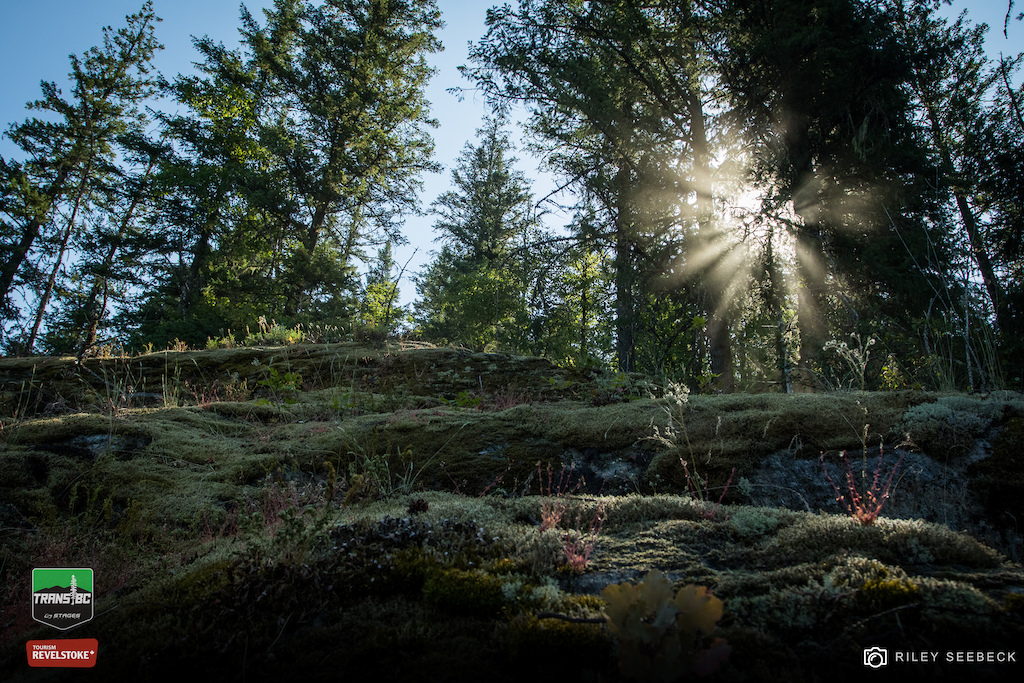 The temperatures were not quite as sultry as the previous day but were nonetheless pressing on the long access road climb back to Revelation Lodge where a lively aid station greeted riders with local baked goods and the carrot of returning to the Monashee Spirits cocktail station prior to Stage 3. 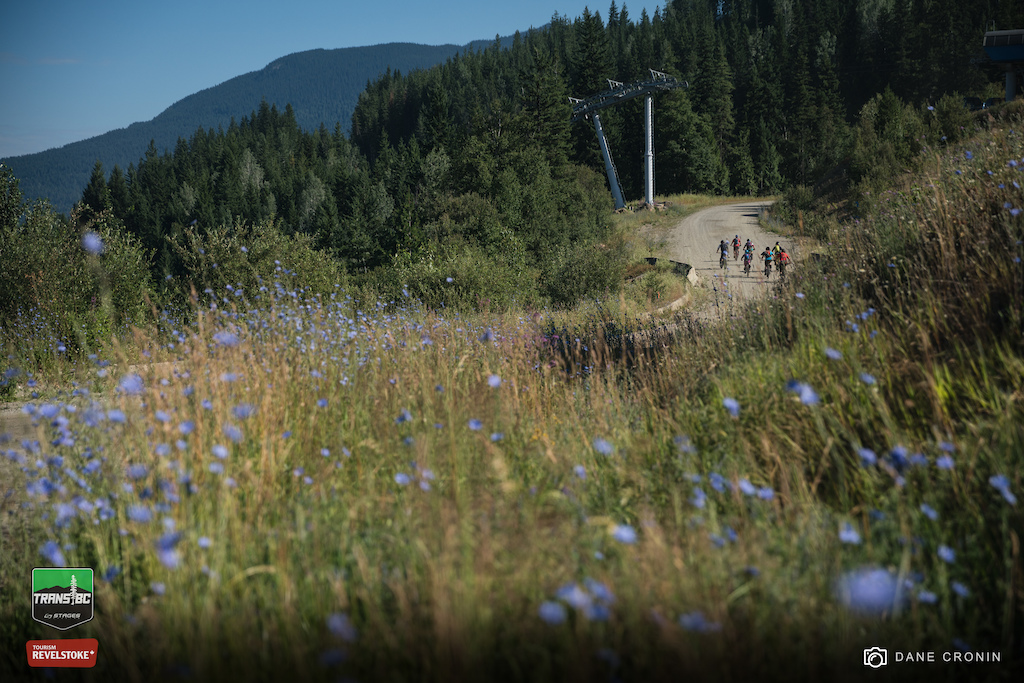 Stage 2 down Southern Comfort, just outside the boundaries of the Resort, was by definition, one of the most challenging runs of the week. But by the sixth day, it was just another run in the life of the Trans BC Enduro. 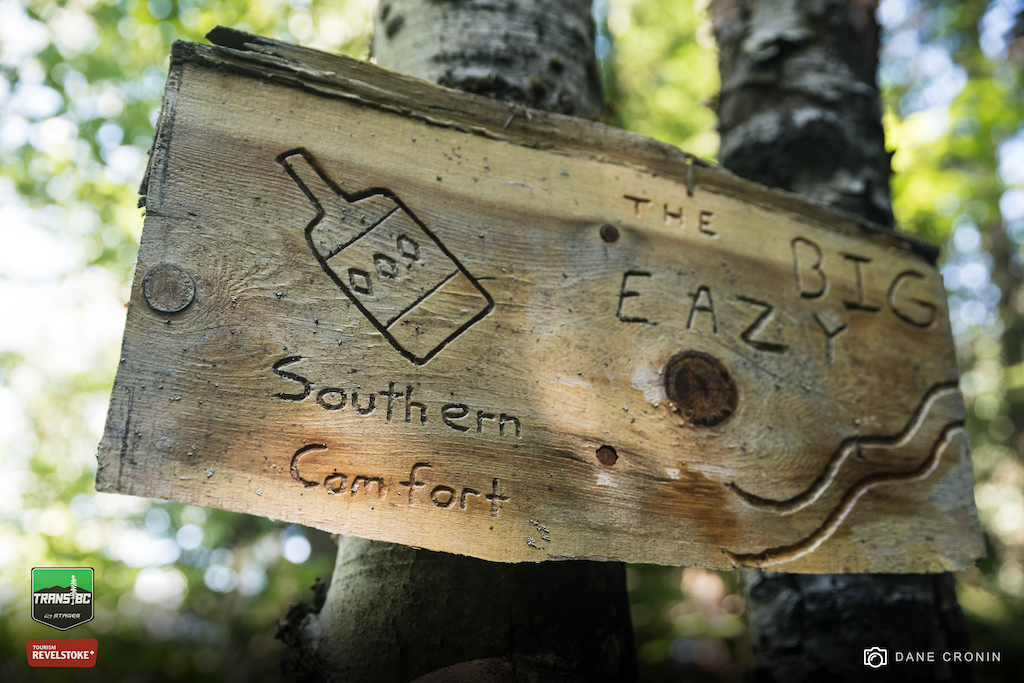 “It was my favorite stage of the day— scary, steep and loose. This was a challenging week of racing day-in and day-out,” said Jennifer McHugh (Fernie, B.C.) Open Women 8th overall. “This was my first big enduro stage race, and I would like to try more. I look forward to racing more of the BC Enduro Series and EWS Whistler this season.” 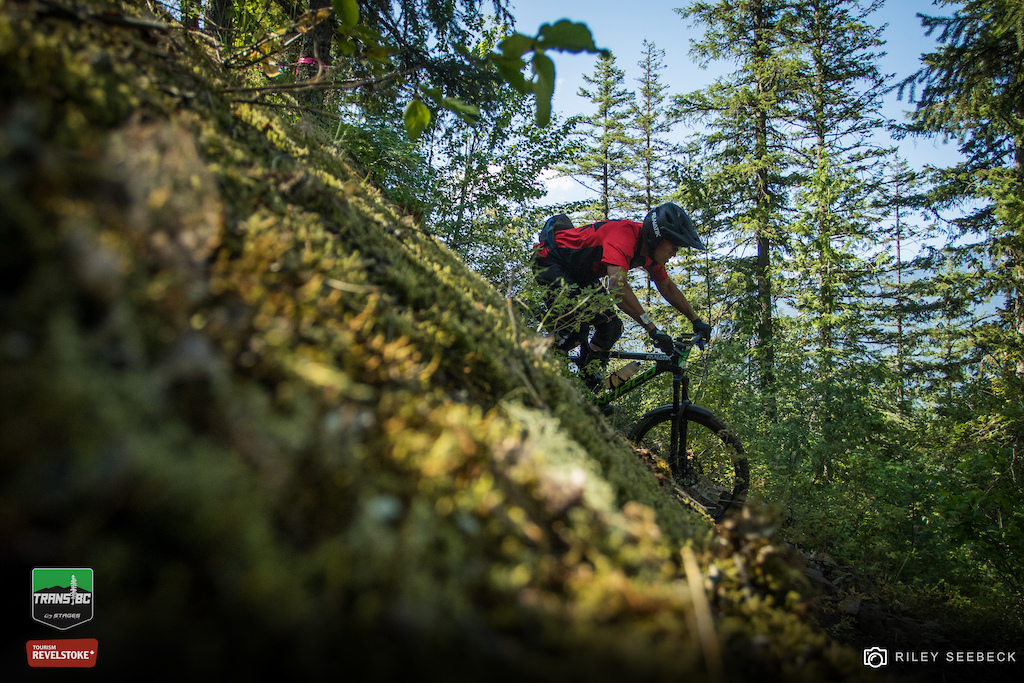 The orange card at the start line warned riders to stay off the gas, be mindful of the gap jump (but just get off the brakes and flow), and trust your surfing skills down the big chute as intimidating as it may seem.

“My main goal was to not break my bike or myself, and finish,” said Joe Larsen (Bend, Ore.) Masters Men 40+. “I would not have ridden [Stage 2] a week ago. You had to pick a line, find a way through rocks, check your body off trees, and surf to make it down. All week progressed up to me riding that stage. I’ve improved more in this one week than I have in the last four to five years of riding.”

With one more grind to the Monashee Spirits cocktail station, riders put their heads down and pushed back up to the top, where their spirits were rejuvenated with a shot of Vulcan’s fire, and raspberry lemon mojitos. 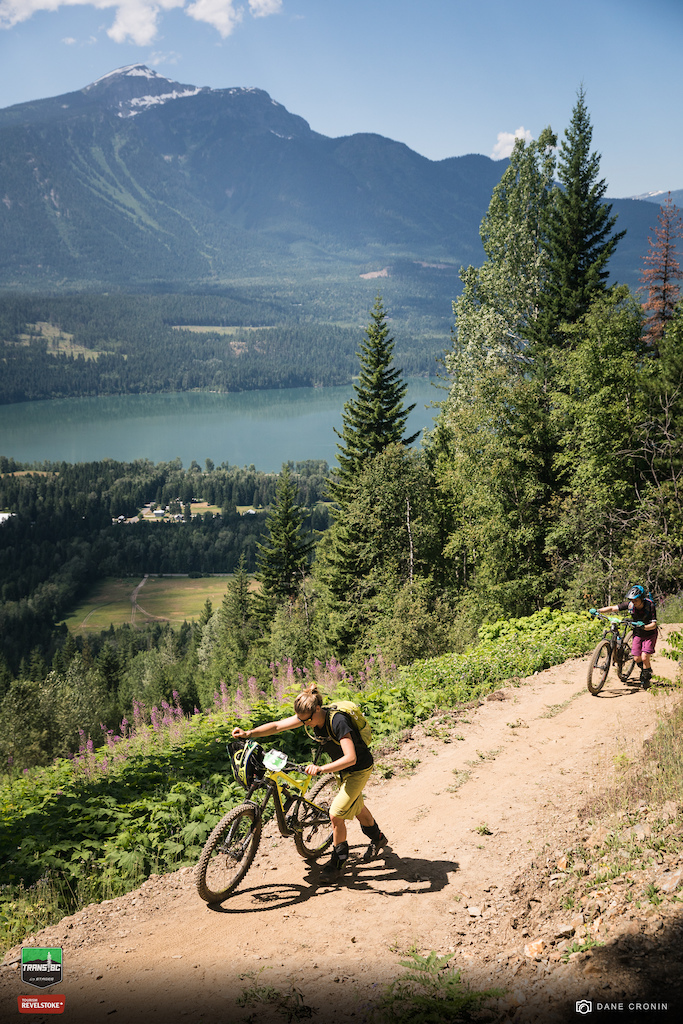 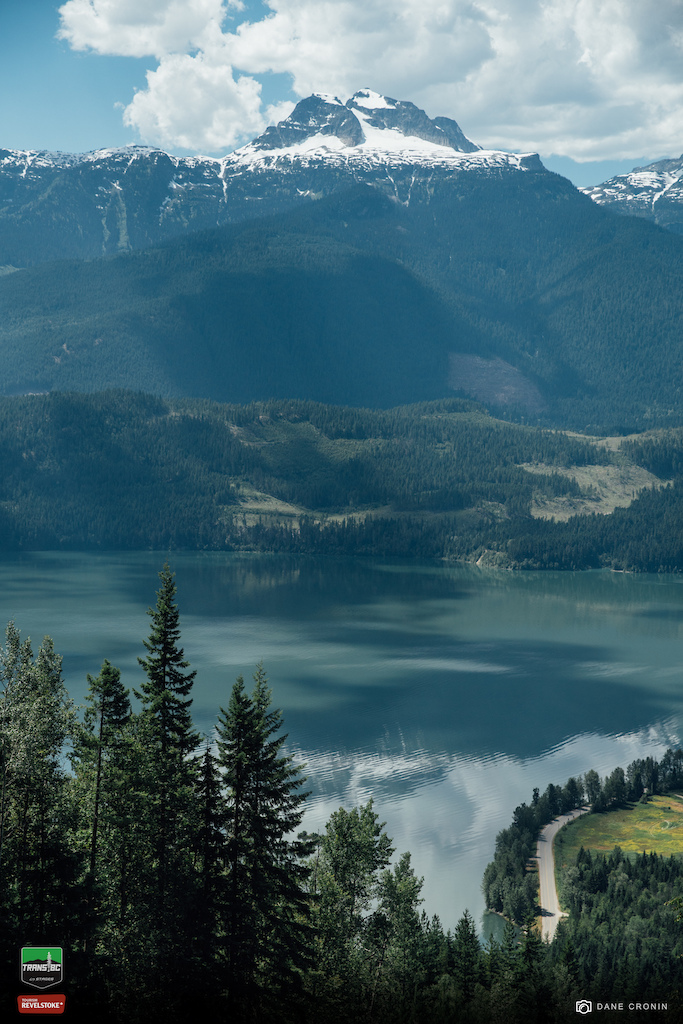 “It was refreshing to calm the nerves before the last stage of a very long week,” said Aaron Grutzmacher (Jackson, WY) Open Men. “If I had known I would be riding looser and more relaxed, I would have considered carrying a flask all week.” 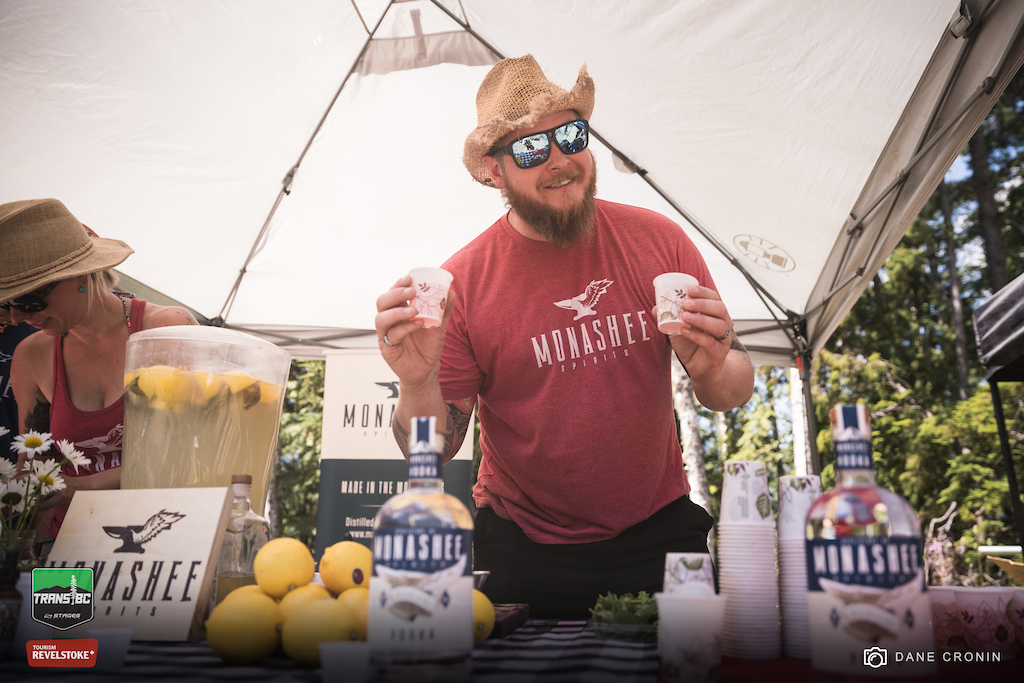 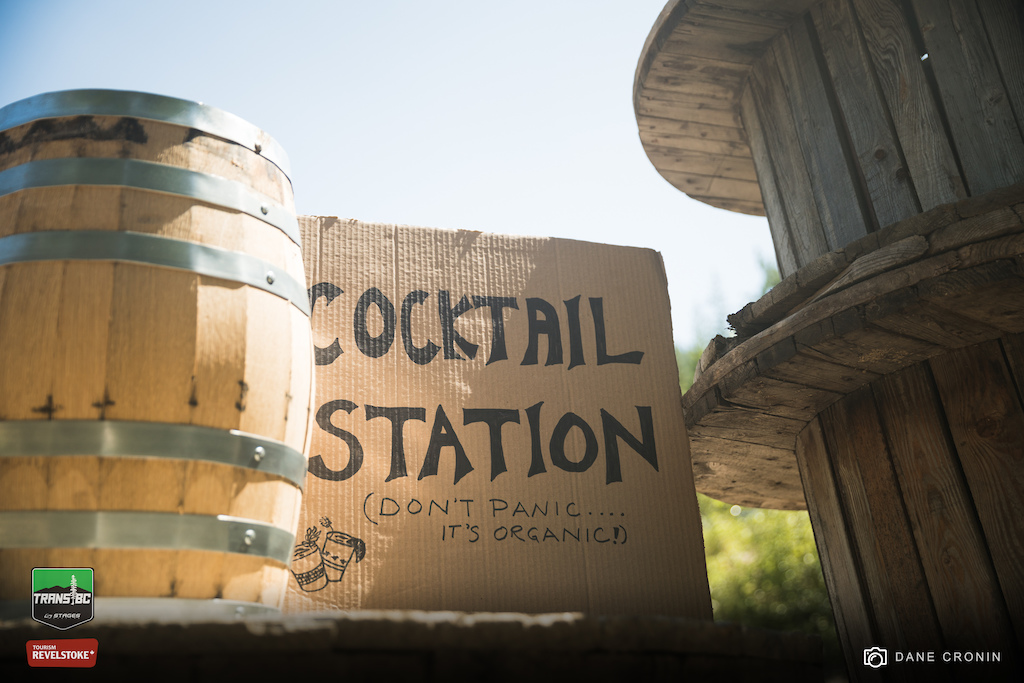 Monashee Distilling supplied the cocktail station before the start of the last stage.
The final stage down Revelstoke Mountain Resort was freshly cut for the event; no name to claim, but full of loamy goodness, off-camber connectors, a large step-down to berm slap, and a high-speed sprint to the final finish line. Beeping in for the final time signified an accomplishment for all. 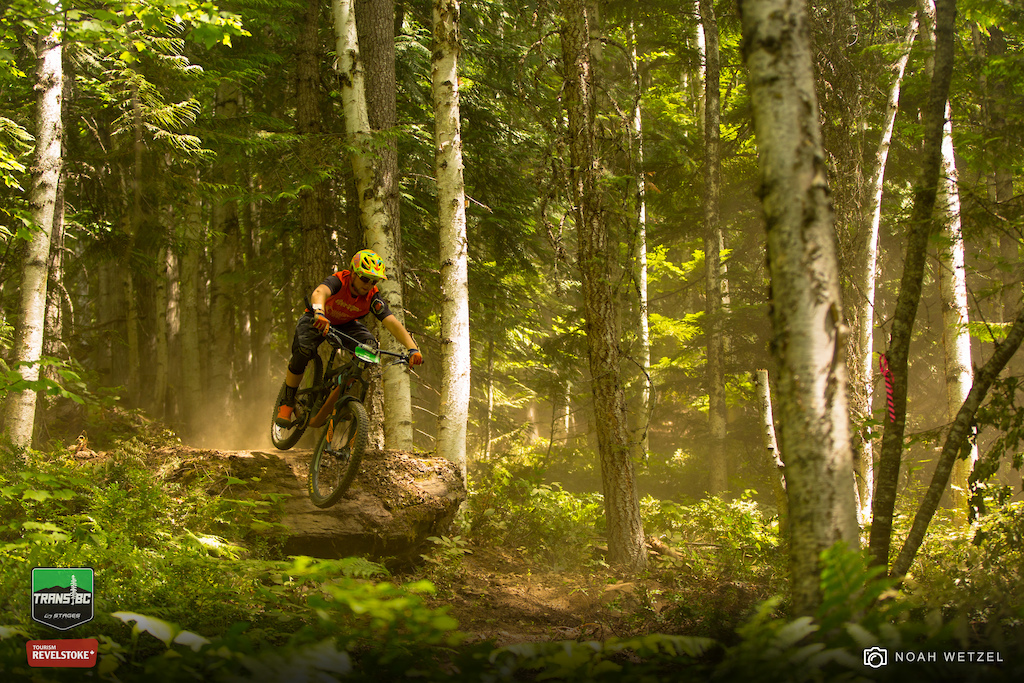 Stage 3 on Day 6 of the Trans BC Enduro in Revelstoke B.C. 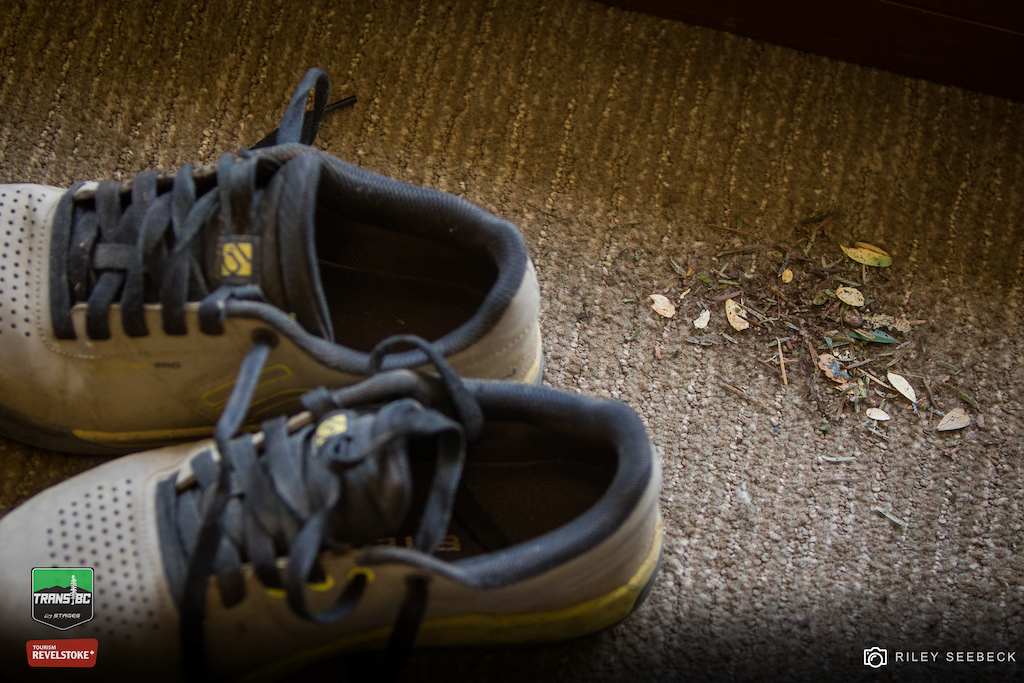 Emptying the shoes after the freshly cut trail ride
“We did the Yeti Trans NZ last year and we decided to level up. We heard that the Trans BC was full on, so we wanted to give it a try,” said Xavier Delahaye (NC). “We all finished in one piece and had a great time. We’ll definitely be back for another one of Megan’s races.” 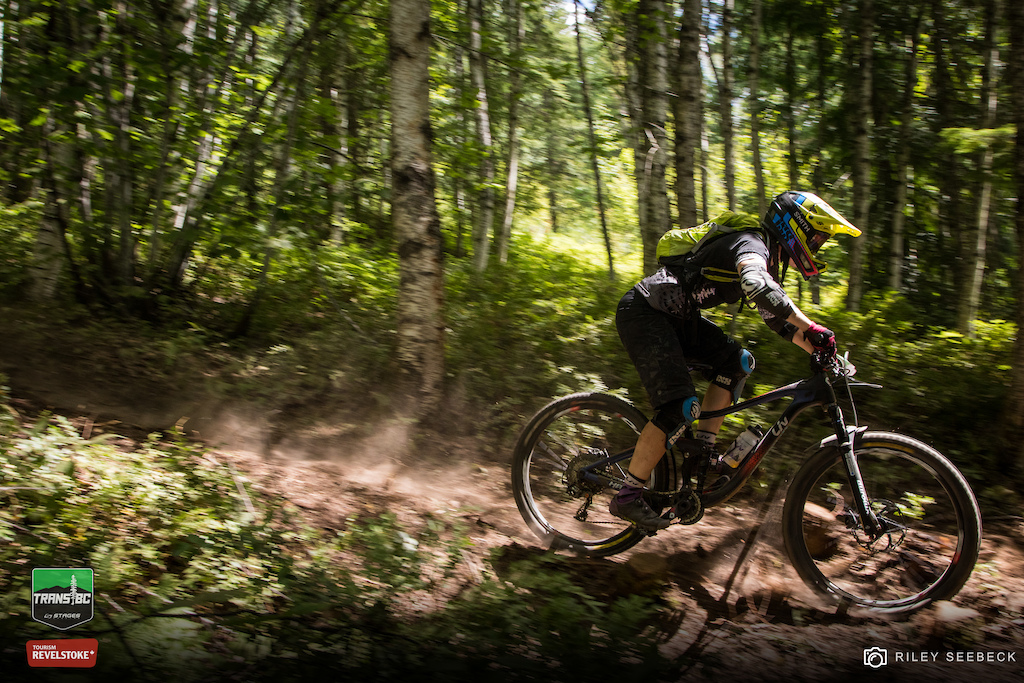 Although these kinds of races favor the experience over the results, let’s not forget that there are still winners. Our strong contenders all week sealed the deal in their respective categories: Casey Brown (CAN) Open, Jerome Clementz (FRA) Open Men, and Rene Wildhaber (SUI) Masters Men 40+. 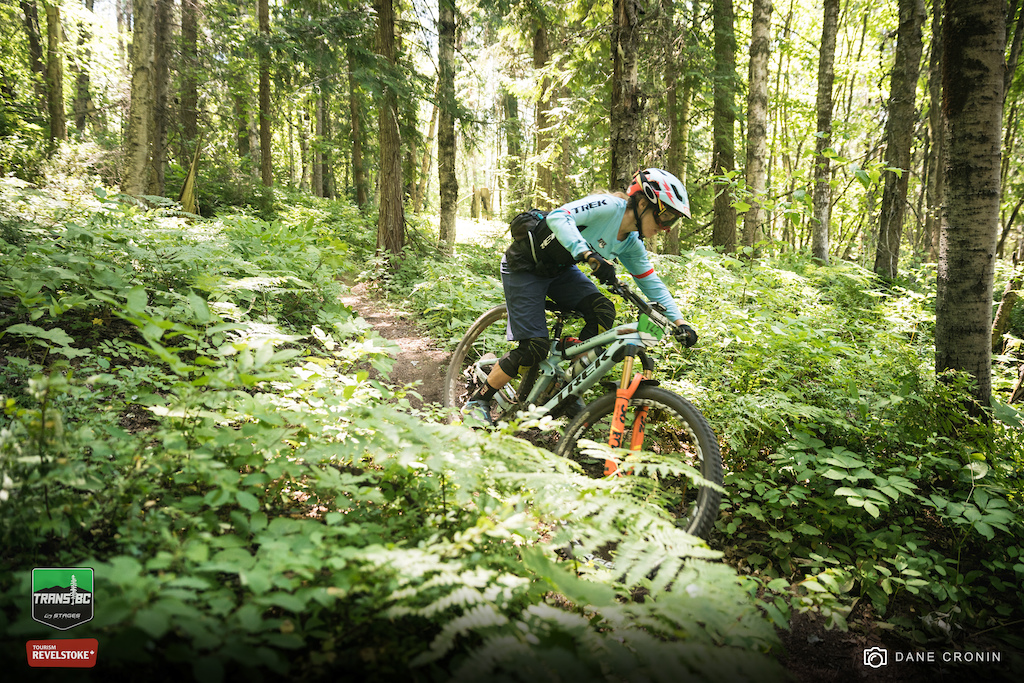 Full results can be found Here. Check out video action from Day 5—Revelstoke.

Despite riders feeling like they received more than they bargained for, Megan Rose, founder and race director of the Trans BC Enduro, always has more up her sleeve. “Last year, we had several pro riders who couldn’t believe what we were sending them down back-to-back. Going into this year, I knew we weren’t going to get the rain like we did last year, so I had a feeling that it was going to feel easier. In the end, everyone who returned from last year said the second year was much more demanding.”

After years of scoping out the best mountain bike locations in the world, Rose recently settled down in Revelstoke. “We touched on a lot of points in the major trail networks, but really it was small in proportion to all of the riding here. You could come back to Revelstoke and continue to be wowed by many other trails that we didn’t race on.”

Racers finished their day back up at Revelation Lodge for a BBQ on the deck and rounds of beer all evening long as they swapped stories, bunny hopped a mini bike and reminisced about their week at adult summer camp— the extreme edition. 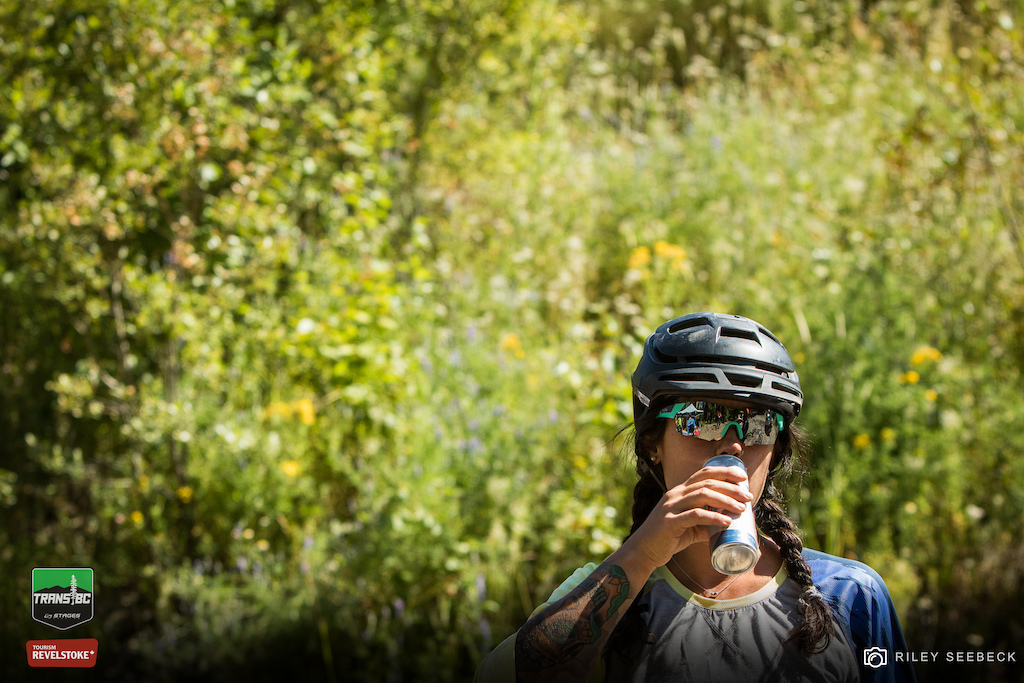 Teamwork makes the dreamwork. Introducing the 2017 TransBC volunteer crew. These guys did their job ls and then some to keep it all seamless for every racer. You guys kick ass.

The Trans BC Enduro concludes the epic week and it’s time Revelstoke and Rose is already looking forward to the third annual Trans BC Enduro to mix things up even more. Look for registration announcements October 2017. 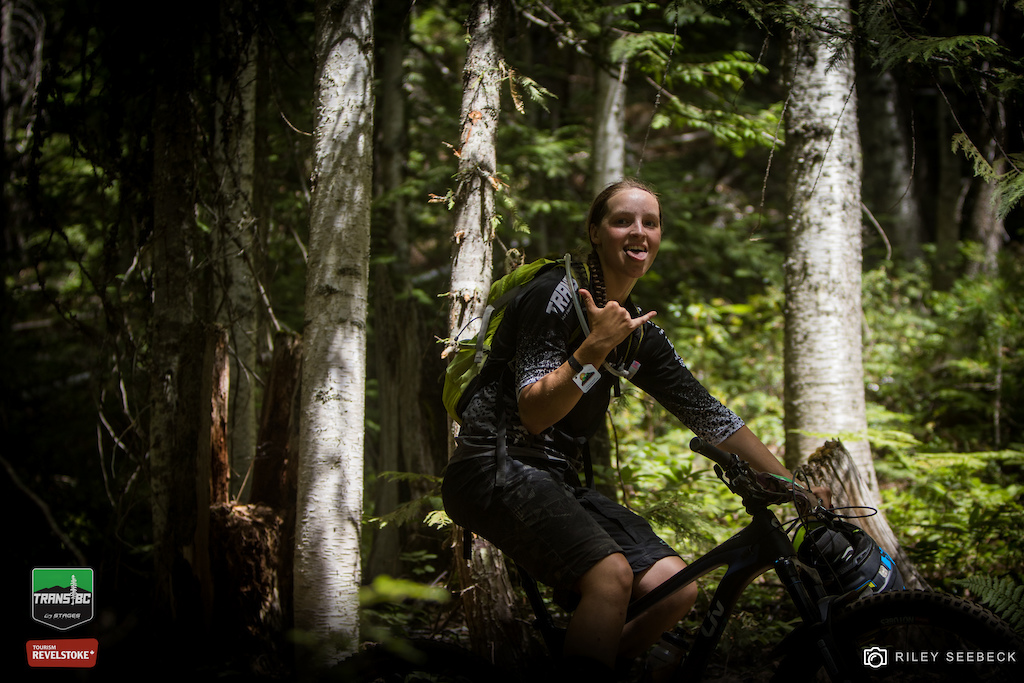 “For next year, I already have a very solid plan in place— possibly touching on some terrain from last year, but creating more of a home base to let people soak in their surroundings. I’m excited to give it a go and have new and returning faces join us for yet another adventure,” Rose said.

Stay tuned to Pinkbike for the final video from the Trans BC Enduro. Hashtag your photos #transbcenduro to make their way onto the live stream of the Trans BC’s Media HQ. 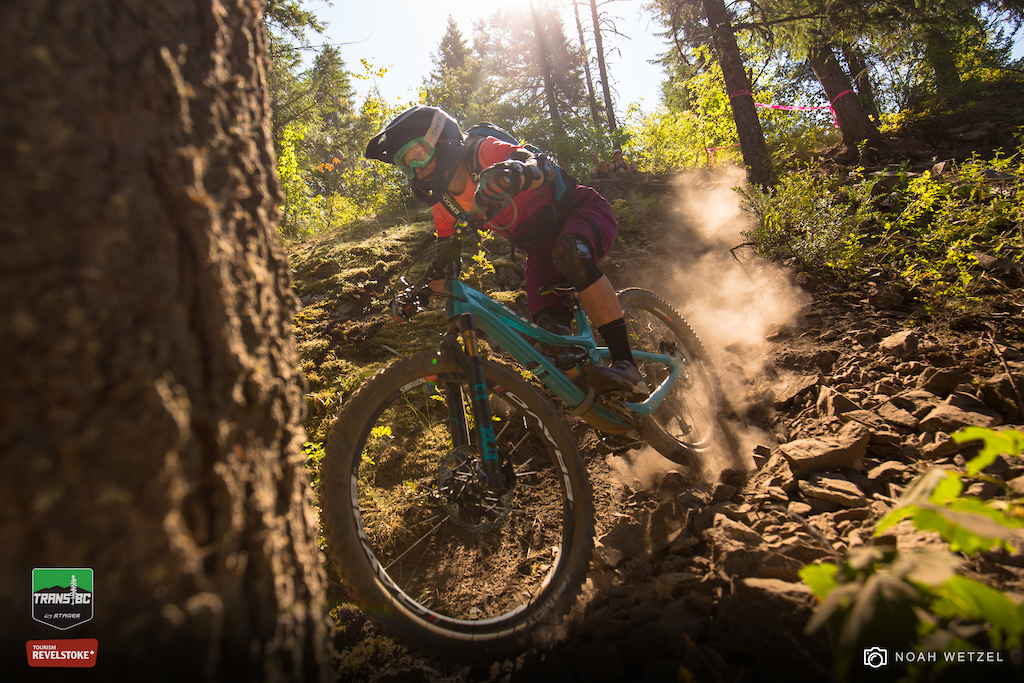 Sarah Rawley on Stage 1 on Day 6 of the Trans BC Enduro in Revelstoke B.C.
Writers Note: These recaps were brought to you from the trenches of the Trans BC Enduro day in and day out. It is always a pleasure pedaling alongside the field to authentically convey what happens on the trail and uncensored feedback from riders. Although a massive mechanical resulted in not finishing Day 1, the rest of the week was spent cruising through each day’s course, high fiving course marshals on the way down, and creatively collaborating with the media crew each night to bring you fresh content each and every day. Until next time…
— Sarah Rawley (Golden, USA)

About Megan Rose: Megan has been riding and racing bikes all over the world for 13 years and organizing bike events for the past six years. She splits her time between British Columbia, Canada, and New Zealand, running the BC Enduro Series and the new Trans BC for 2016, and running the Trans NZ race. Over the past two years, Megan has personally raced in over 24 enduro races, timed over 58 days worth of enduro races, and personally organized 22 enduro races. Megan and her team look forward to bringing you the best of the best from all of these perspectives.

About Stages Cycling: Stages Cycling LLC, based in Boulder, CO, launched the Stages Power meter at Interbike in September 2012. The new Stages Power meter immediately made waves for the power measurement category in all disciplines of cycling, including enduro, where the sport's top pros collect and trust its data for training and racing. Since the brand has expanded into the commercial and home fitness category with the SC3 commercial indoor cycling bike, with groundbreaking features including CarbonGlyde featuring Gates CarbonDrive, SprintShift, FitLoc, RoadBar and, of course, the Stages Power meter. More information at stagescycling.com. 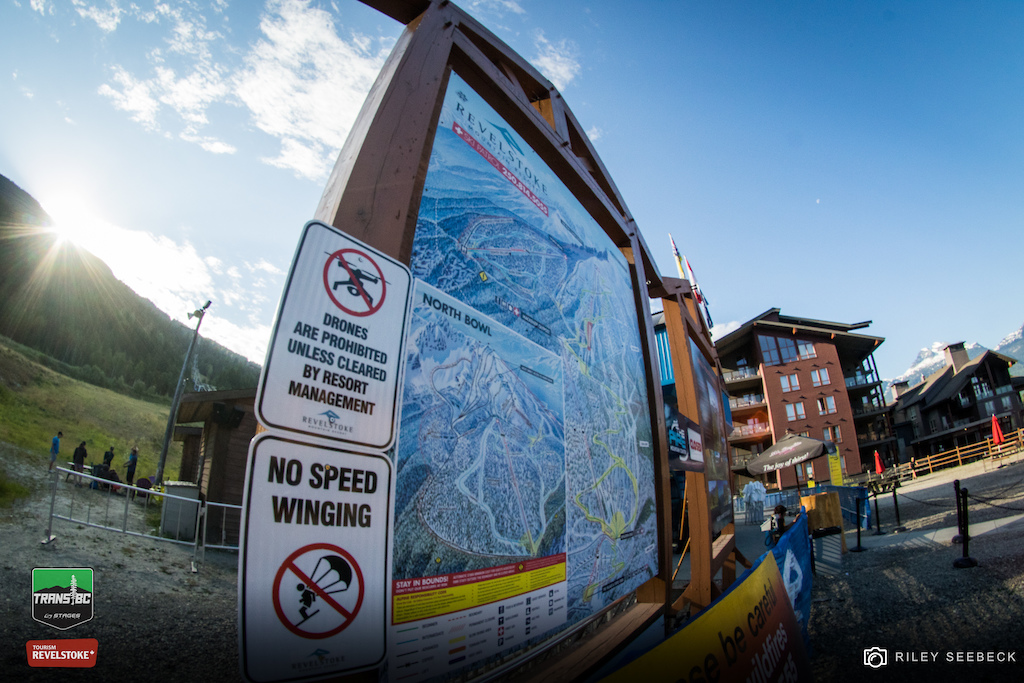 BryceBorlick Plus (Jul 16, 2017 at 14:28)
Such a great week! Congrats to everyone involved, especially Megan for pulling it off and Revy local Casey Brown for taking the win on home turf.

egshane (Jul 16, 2017 at 20:36)
Best week ever of riding and racing. Thanks to all the volunteers making this event run super smooth. I have been lucky enough to ride and race all over BC but this event still had me grinning ear to ear. I think most racers at this event would agree when would you ever push yourself this much 6 days in a row with no rest and riding some of the craziest trails blind. Hats off to the racers who struggled on those days.

Never in my whole life have never ridden such steep sustained trails! The smell of burning brake pads still tingles my nose hairs...

Back to work Monday

kamahawk (Jul 17, 2017 at 12:33)
To the crew filming and editing these short videos on such a quick timeline with such amazing quality. Your work has not gone unnoticed. Very very well edited-quality clips in such a short amount of time.

Doowaroda (Jul 17, 2017 at 23:26)
Following this race makes me want to enter so badly, although the race descriptions seem to confirm that I will definitely get myself killed on Day 1