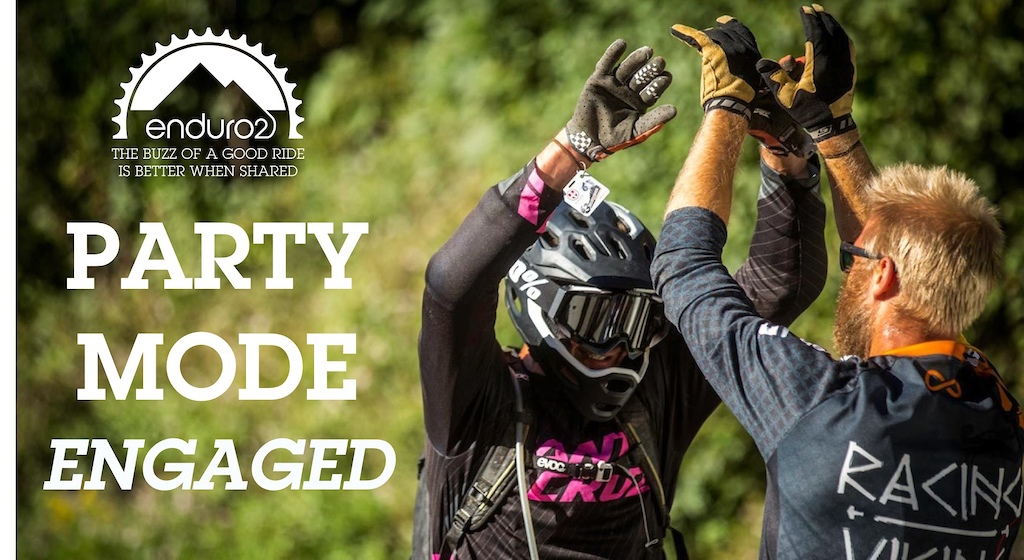 Europe's original pairs-only Enduro racing format arrives in the southern hemisphere with one event already in-the-bag and round-two on the way, in April. A day of high-fives and team-hugs went down at the Wairoa Gorge, Nelson, in typical Kiwi fashion: No fuss, little ceremony, but with lots of good times, high spirits, and plenty of shredding.

Strictly speaking, Enduro2's first NZ event was a slimmed-down 1-day preview of their 2-day weekender on 25 & 26 April and judging by the early feedback, it's going to be a classic event. We reckon the late-April date - over Anzac public holiday weekend - could be a top way to close your riding/racing season.

Off the back of a few years of hugely popular festival-style events (500+ riders) in France Switzerland, Enduro2 finally brought its unique pairs-format event to Nelson after a few years of scouting all over New Zealand. The crew took over the Wairoa Gorge Bike Park for a day, with support from the regular Gorge team and Nelson MTB Club. If you aren't a Kiwi, there's a fair chance you may never have even heard of Nelson...but we'd bet that's all about to change very soon. A lot of work by The Local Club has been going on behind the scenes to put in a bid to host an EWS in Nelson for 2021, and it certainly got our vote. Time and again, riders visit here for a holiday and get sucked in for a few extra days...or in many cases, they never leave at all, it really is that good. The Enduro2 events of Europe have typically avoided go-to resorts that are big on bike-park-groomers, in favour of introducing riders to lesser-known locations with a bias of long descents and natural-style single-track...and this philosophy was mirrored again in its NZ events. You be hard pushed to find a single digger-built table or berm at the Wairoa Gorge anyway, and that sits just fine with us.

As part of an expanding Enduro2 Global Series, the first Nelson event diverged from Enduro2's standard long-weekend format, with a pilot 1-day-only special. It set out to dispel the myth that the riding in Nelson, and especially at The Wairoa Gorge, is for biking heroes and nut-jobs only. You've all heard the tales, right? Arrrrghhh, me hearties, The Gorge be not a place for mere mortals! For those who dare to tackle the beast will surely perish. There ye shall find roots that writhe like giant serpents, boulders so sharp they'll cut to bone with a mere graze, slippery rocks that no man or rubber can find even the slightest grip upon, and if ye should fall from the precipice at the side of the trail, ye shall face a mile-high fall into a deep and raging torrent of frigid water, filled with crocodiles and sandflies the size of humming-birds.

Whilst those who forgot their repellant might argue that the sandflies did a good job of living up to their reputation, it was agreed unanimously by all who raced - the Gorge has a whole stack of amazingly fun and flowy trails that are just as fun to ride in the wet. A lot of time was put in to develop a course that would hit the sweet-spot and offer blind-racing that was - most crucially - fully accessible to competent riders of all abilities, rather than tailored towards the semi-pros among us. 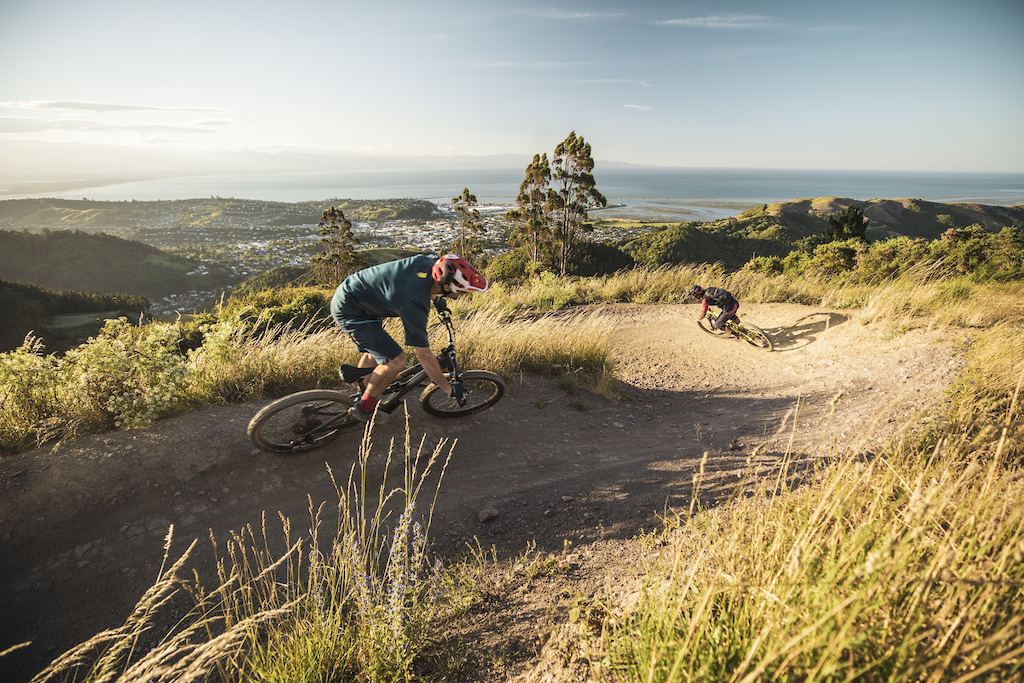 This is how it usually looks in Nelson in the summertime, (99 times out of 100)
The resulting course was a selection of 8 intermediate-level stages, shuttle-accessed, and with a handful of climbing single track liaisons - a total of 2200m descent and with a typical on-stage time of 50-60 minutes for each team...all in a setting of The Gorge's wonderous natural beech forest and on its finest 100% hand-cut single track. 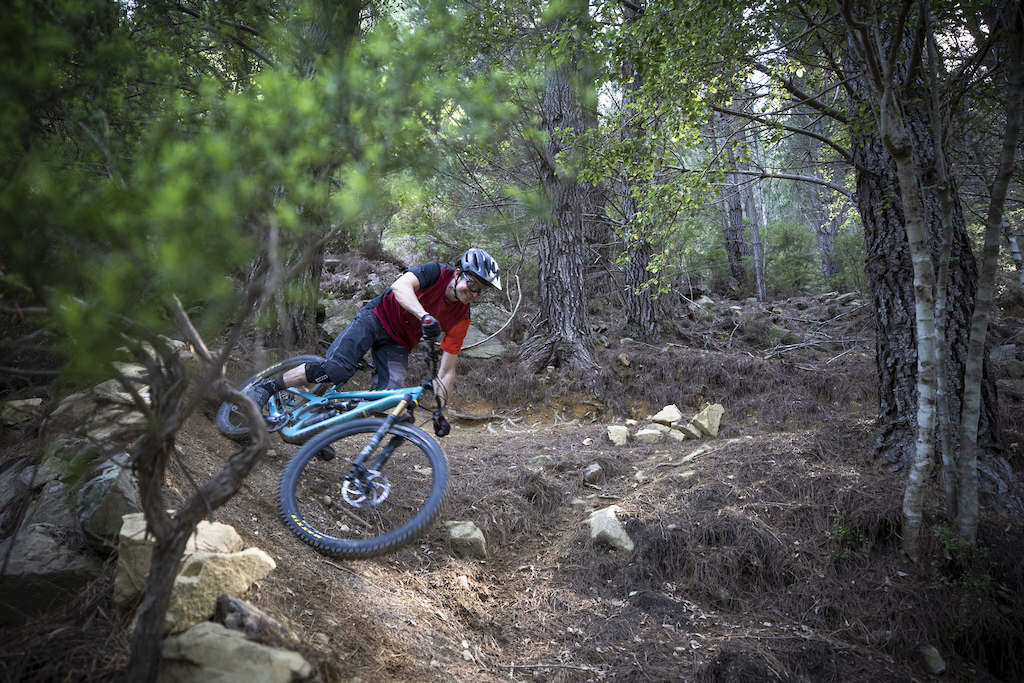 Railing a hand-made berm at The Gorge...before the heavens opened
Nelson is well-known for being New Zealand's sunniest city, so riders were well-prepared for a day of sun cream and dusty trails. Except, as is often the case when it comes to events, the weather didn't quite play ball and riders and volunteers alike were subjected to a day of relentless heavy rain and low-lying clouds. The trails became rivers, and it all got pretty wild out there. But fortunately, the organiser's had it covered. A well-prepared course and a superbly committed and enthusiastic team of volunteers meant that all stages were ready to go as soon as the first riders turned up. Enduro2 has an open-start-order system without time cut-offs, so riders were able to drop right into each stage without any waiting around in the rain. (In fact, those taking a less-than-serious approach even dropped in together as party-trains of 4 and 6 riders). A waved-departure-time format was used, to minimise any waiting around for the uplift shuttles or queuing to drop into the first stage. Hot food and coffees were on hand all day at Irvine's Hut at the very top of the bike park, as well as a welcome chance to warm up around the log-fire before heading out on to the next stage. 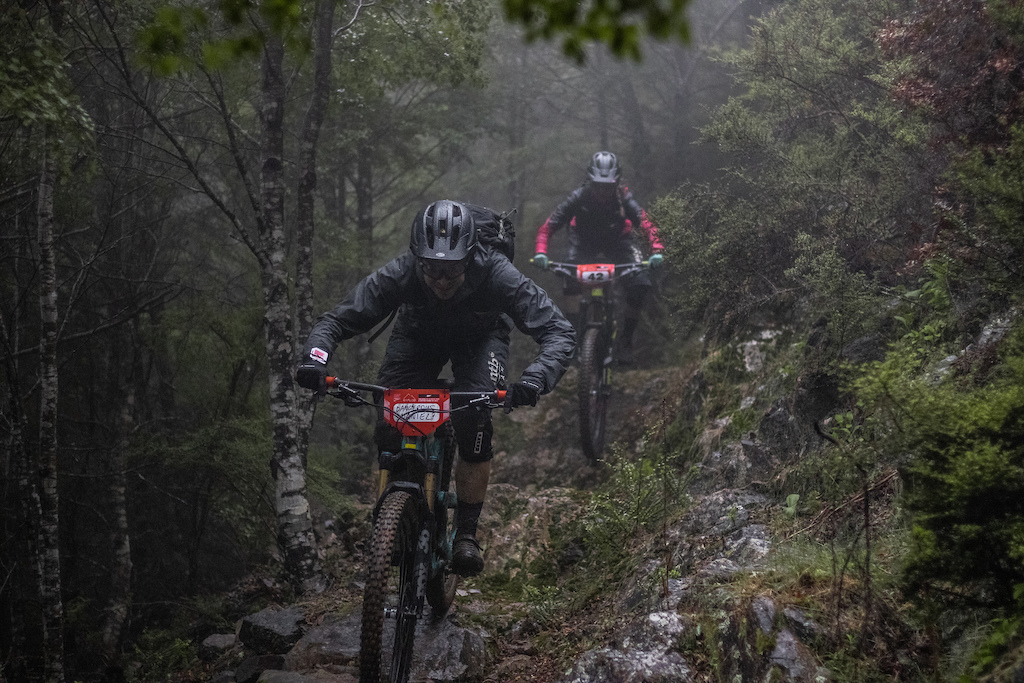 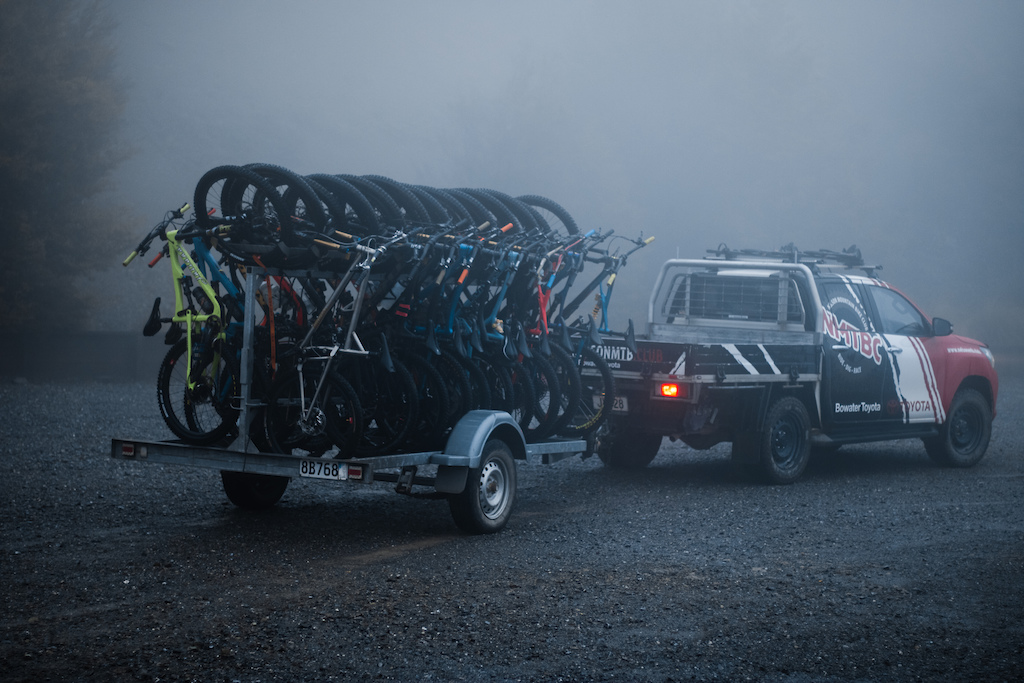 Super-Efficient Uplifts and 800m+ of vertical meant riders weren't waiting around between shuttles
The excellent terrain at the Gorge holds up superbly well in the wet, and some even claimed that the hundreds of beach roots actually get grippier when it rains enough to wash off the thin layer of mud that gets dragged over them. We'd suggest these Jedi-like mind tricks should probably be reserved for the likes of local riders Raewyn Morrison ( EWS world-ranked No. 8 ) and Loui Harvey who turned up to keep everyone else honest.

Then again, no-one was really watching the results, because Enduro2 is more about good times and sharing that experience with your riding buddy, than about win or lose. The Grade 3 and 4 trails were an absolute dream to ride, especially in these challenging conditions, and all in all, it was high-fives and big smiles all round. This was especially apparent when there was a lot more fuss made over the free beers and obligatory high fives at the finish line than there was about the podium! The relaxed format and trail-choice of Enduro2 attracted a broad spectrum of riders into the mix - >30% of entries were female, 20% had never raced before at all, and ages from 12 to 57 were out there shredding like hell - or simply chilling out and enjoying the trails and the vibe. The father and son category was a big winner, even if it meant many-an-enduro-dad had to finally admit that their teenage son was already a way better rider than they ever were.

And that, in our books, is just the way it should be: Good times had by all, everyone welcome, and all kinds of riders going home feeling like they got what they came for. A job well done. 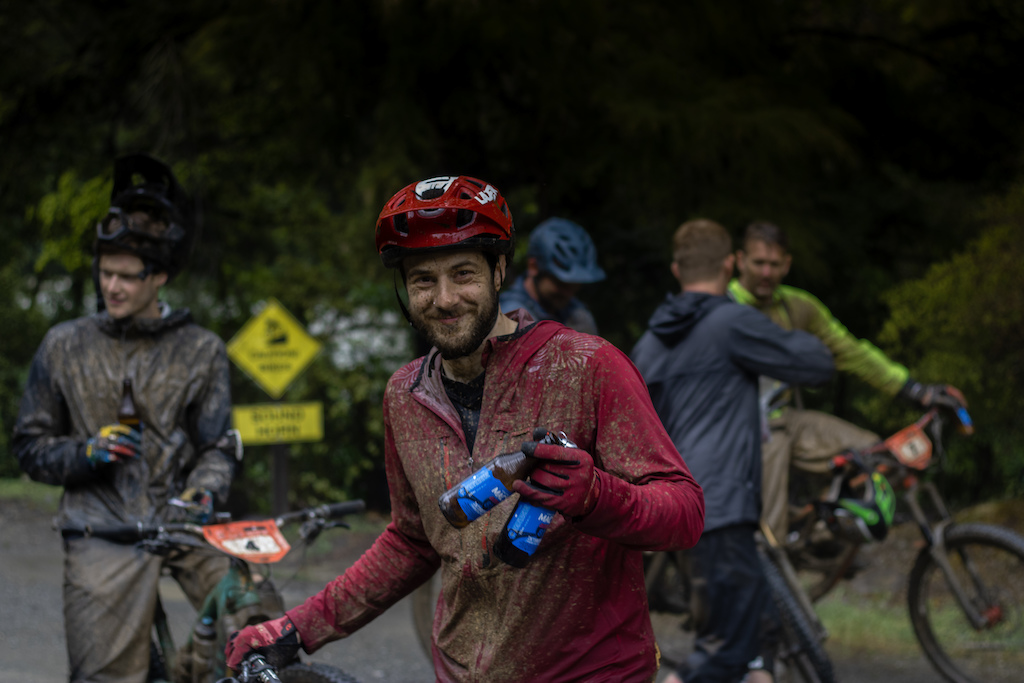 About the only advantage of 'dropping' your teammate in Enduro2, is stealing their beer 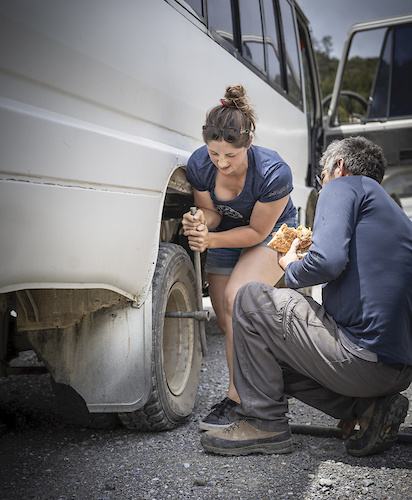 Alice & Dave, two of The Gorge's dedicated Shuttle Crew, not letting a flat tyre get in the way of their faultless service...or lunch!
Speaking of results, it is worth noting the unique timing format adopted by Enduro2. Whilst many newcomers to the team-enduro party have adopted an "average-team-time" approach, most notably the Enduro des Nations, Enduro2 has stuck firmly to its slowest-time-counts approach. A team cannot finish a stage and record a time until both riders are at the finish line. This encourages true teamwork rather than an every-man-for-himself attitude, and various tactics on this theme were apparent at the event. Noting that all racing is blind (no practise allowed), the lead-rider in a pair has a distinct disadvantage over his or her teammate as they try to read the trail and spot the lines on-sight. More often than not this leads to a bit of colourful discussion over line choice and plenty to laugh about by the time the stage is complete!

Good vibes and plenty of positive feedback from the 100 riders in this sell-out event was pretty clear: Pairs-format racing works down here just as well as it does up in Europe! 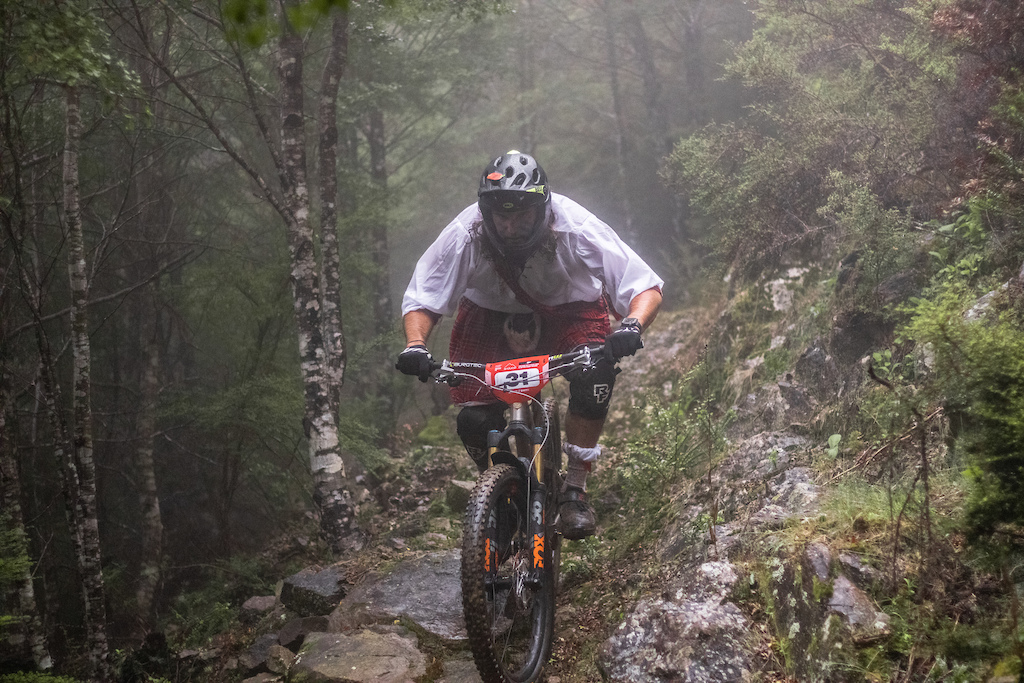 "Yeah but, why wouldn't you wear a kilt to a bike race in a rainstorm, Bro?" 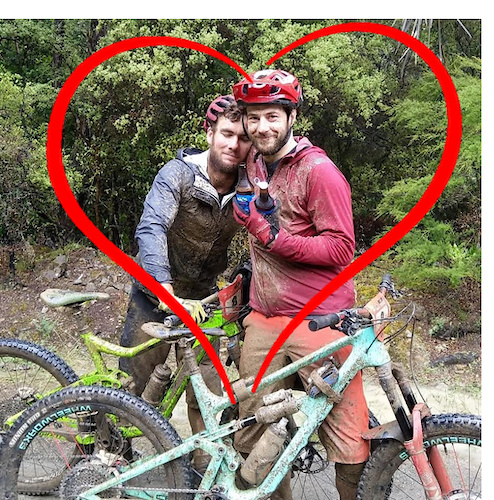 The range of emotions shown in this finish-line photo eventually led to its nomination for the Pulitzer prize
Full results available here.

Enduro2 is back over Anzac Weekend (25 & 26 April) with a 2-day riding adventure. Bunk-house and campsite accommodation will be available to book with your entry, as well as extra activities on the public holiday Monday such as a backcountry Heli-Drop and shuttled backcountry group-ride adventure.

Day 1 will be a range of Grade 3 to 4 trails
Day 2 steps up to Grade 4 and Grade 4+ level.
Hero-level trails will definitely be left off the menu.

A range of entry options will be available, allowing riders to jump-in for 1-Day only, although we'd have to recommend the full-fat 2-day experience especially if you are coming in from out of town.

We'd say it's going to be one hell of a party to end the season with - and we'll see you there!

Thanks go to Yeti Cycles New Zealand and Ground Effect Clothing for stepping up and getting behind the concept at an early stage.

Riders in the Northern hemisphere can look forward to the return of Enduro2 Les Arcs, 3-5 July 2020, with 300 riders taking in 10,000m+ of singletrack descending over 3 days. The dates have shifted one day early this year, to line up with a brand new Les Arcs season launch party, including live music and a free-invite to all riders in the valley who want to get involved in the pairs-action. A special one-off mega-stage finishing directly at the bar will help kick off proceedings. (Yes, this invite is even open to those riders not taking part in the main event). Entries are already 80% sold out, so get in quick if this sounds like your thing. 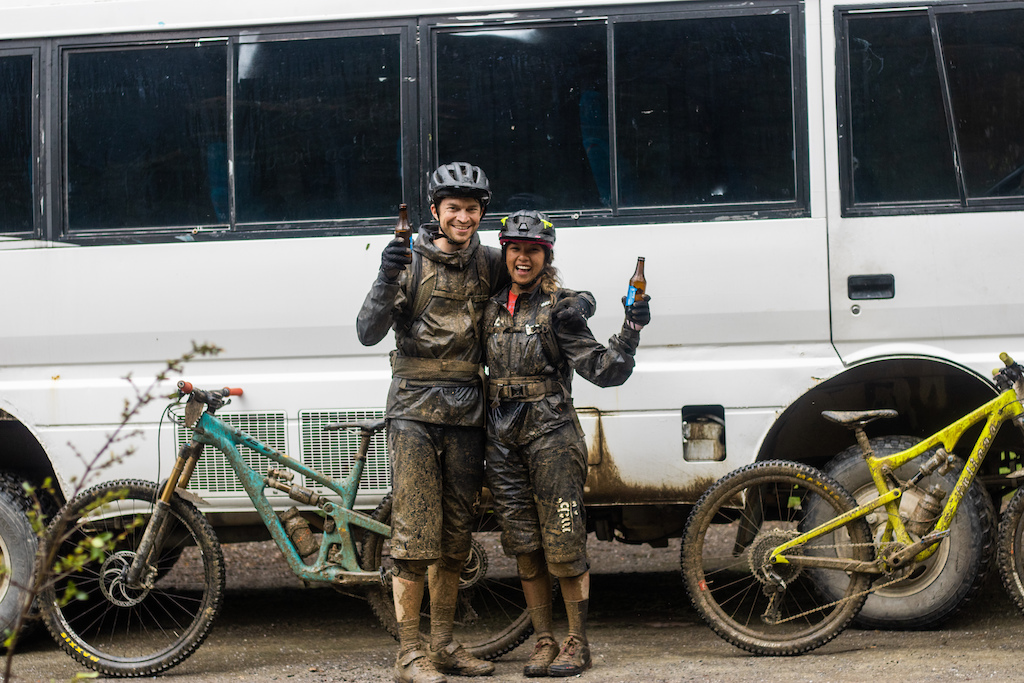 Couples-teams made a strong showing at Enduro2. Daniel and Kim made the trip from Switzerland and were still smiling even after 8 very wet stages 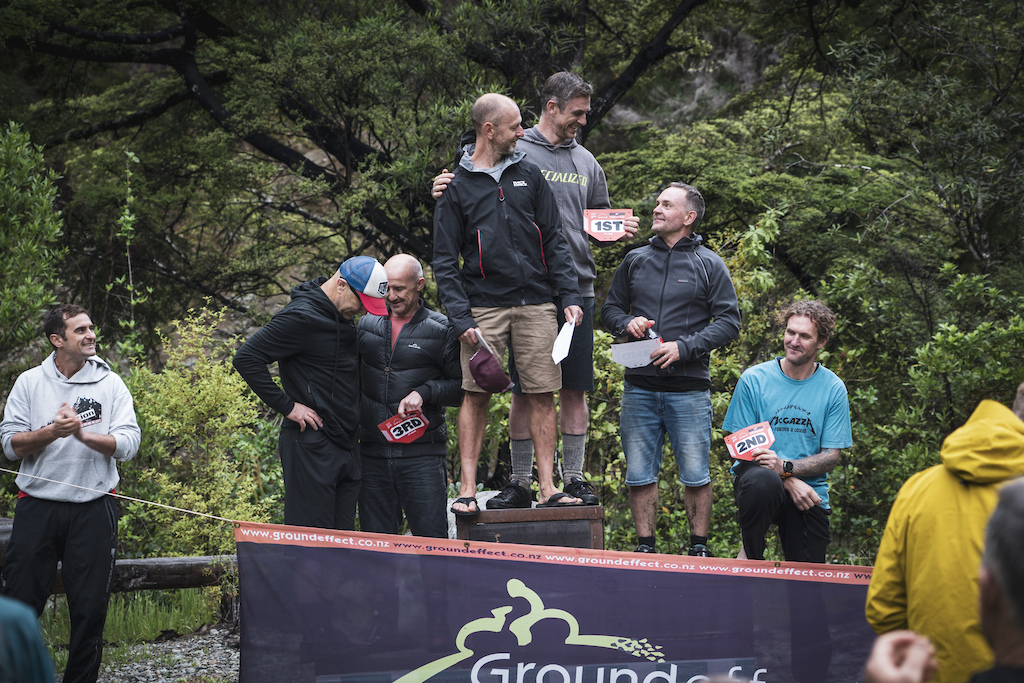 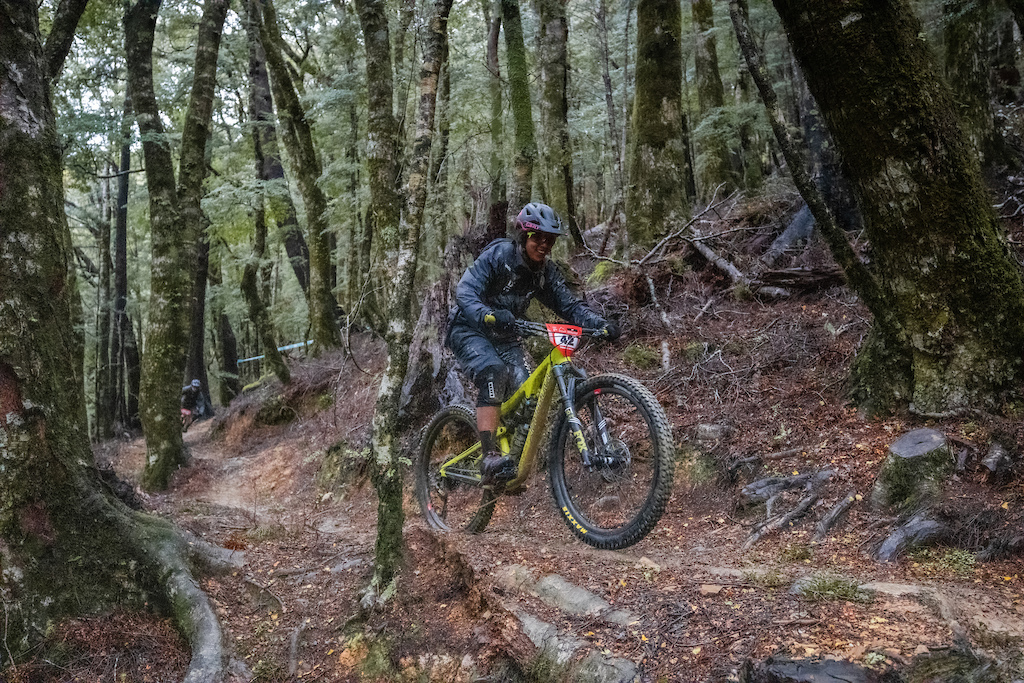 Girl Power was very much on display at Enduro2, with more than 30% female entries 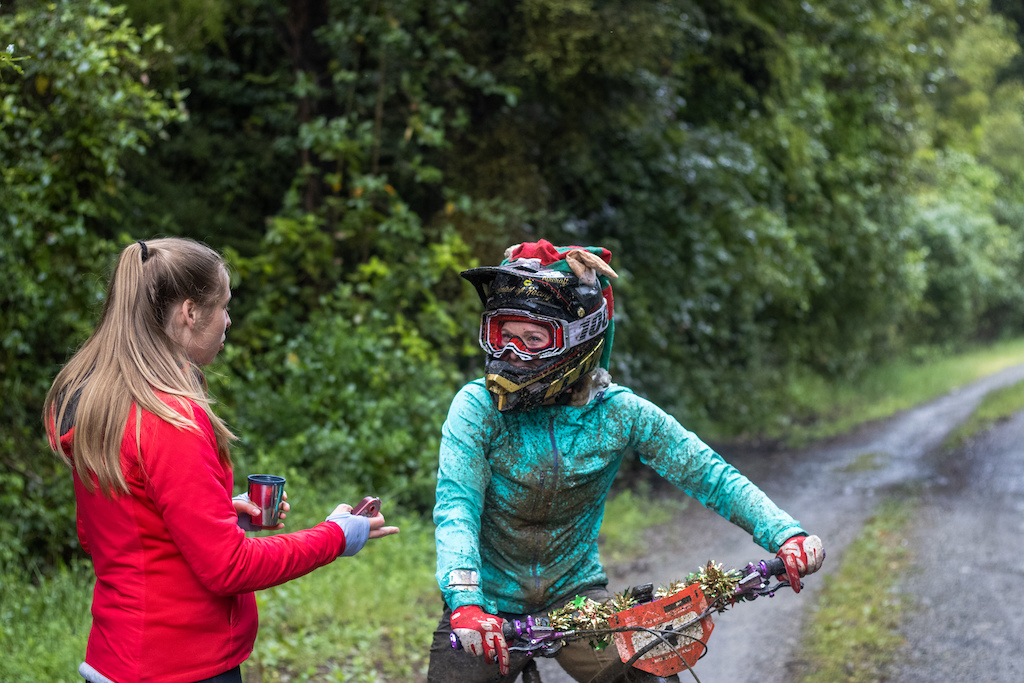 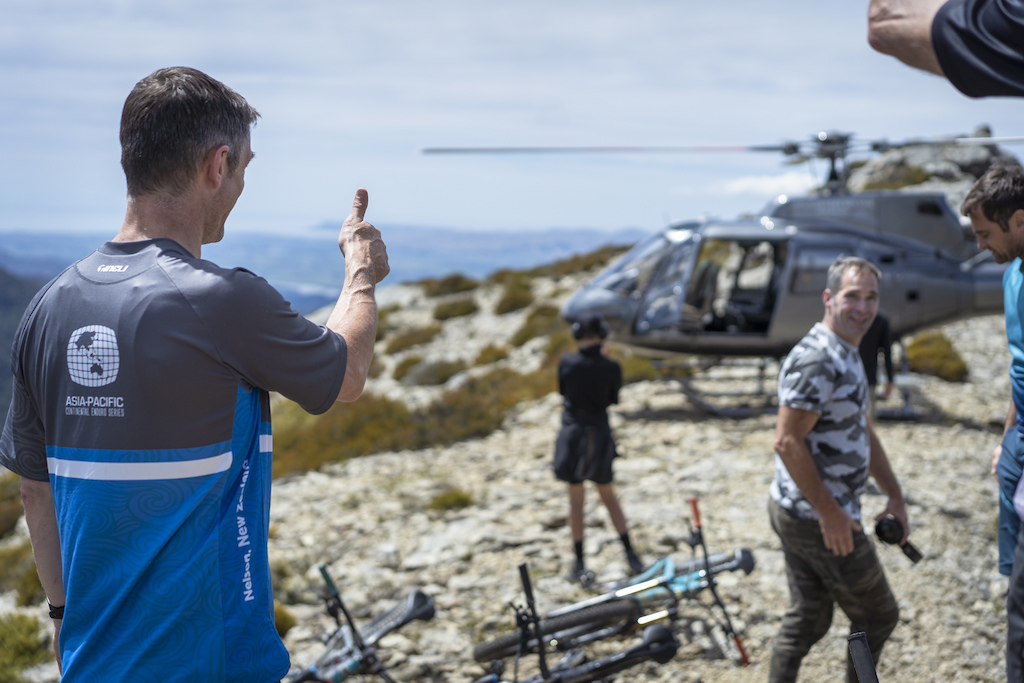 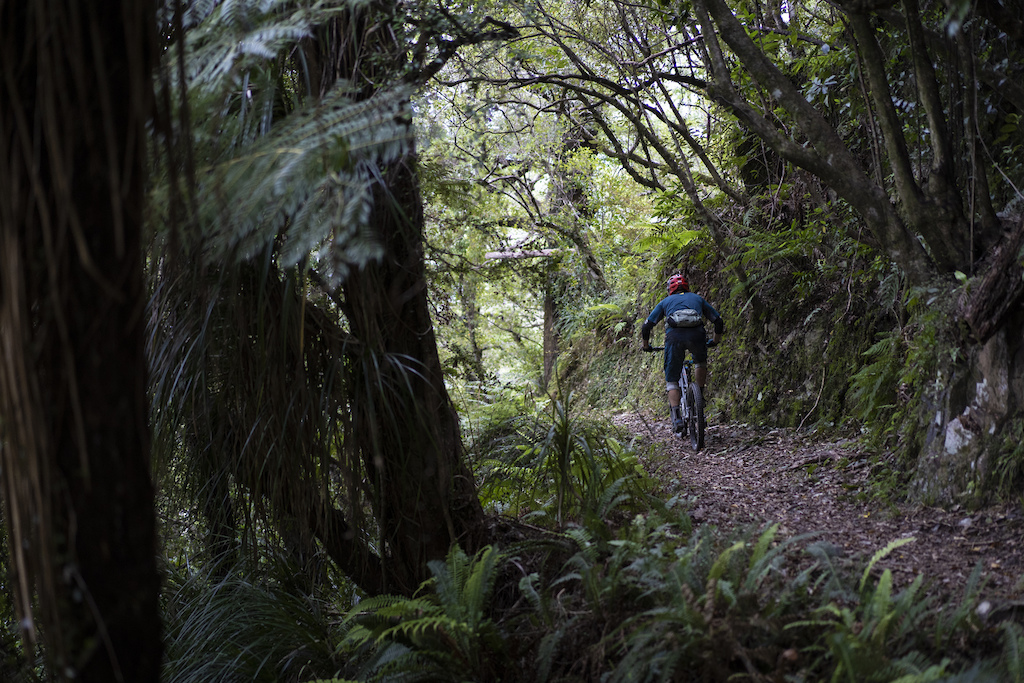 Natural Beech forest goodness is certainly not in short supply, in backcountry Nelson

metaam (Feb 17, 2020 at 15:02)
Did a day at Wairoa Gorge a few weeks ago (just before it closed because of fire risk). It should be on the bucket list of anyone visiting/living in NZ. The work that has gone into the trails is phenominal (always helps when you have a billionaire funding things). Some of the best riding I've done anywhere in the world, right up there with Whistler/Squamish and Finale.
Fingers crossed they'll get some much needed rain soon.

gbeaks33 (Feb 17, 2020 at 16:10)
I'm visiting Nelson right now and all trails in the area are closed so had to cancel our Gorge plans. Guess I'll just have to settle with all these breweries in town....

metaam (Feb 18, 2020 at 1:23)
@gbeaks33: It may be worth giving Gravity Nelson a call, they were still doing uplift days at Cable Bay when everything else was shut.

tealdub (Feb 16, 2020 at 16:25)
You had me all excited that they finally got some rain down there to dampen the fire risk, turns out this was 2 months ago

TransSavoie (Feb 16, 2020 at 20:22)
Fair comment - Its pretty dusty out there at the moment and all the trails are now closed all over the region...but we've had a bit of rain today for the first time in weeks, and its supposed to come in stronger over the next day or two. We sure need it! Fingers crossed! (Alternative plan: organise an impromptu event and the heavens are bound to open, right?)