Video: YT Celebrates the 10th Anniversary of the Tues

2020 was a challenging year for downhill mountain biking. However, despite the small sample size of pro racing this year, the YT Tues proved yet again that it is one of the greediest bikes out there, enabling Oisin O’Callaghan and David Trummer to ride to Gold and Silver during the World Champs. World-class athletes have secured several World Championships, World Cup Overalls, and Rampage titles on this bike in years passed – a success story that started back in 2008 and truly kicked off in 2010. Celebrating its tenth anniversary since the conception of the V4L suspension linkage, YT test rider Erik Irmisch sends it on the big rig through Germany. The 32-year-old has played an essential role in the evolution to develop the Tues into the beast it is today.

Erik ‘Irm’ Irmisch has been with YT since 2010 and is closely linked to the evolution of the Tues – YT’s ruthless and uncompromising downhill rig. The downhill racer is part of the product development team and gives valuable feedback from an athlete’s perspective to the engineers and developers. In the early days, the Tues' development was spearheaded by Stefan Willared, former CTO and today CIO of the company. Both Stefan and Erik have played a vital part when it comes to the evolution of YT’s downhill bike. 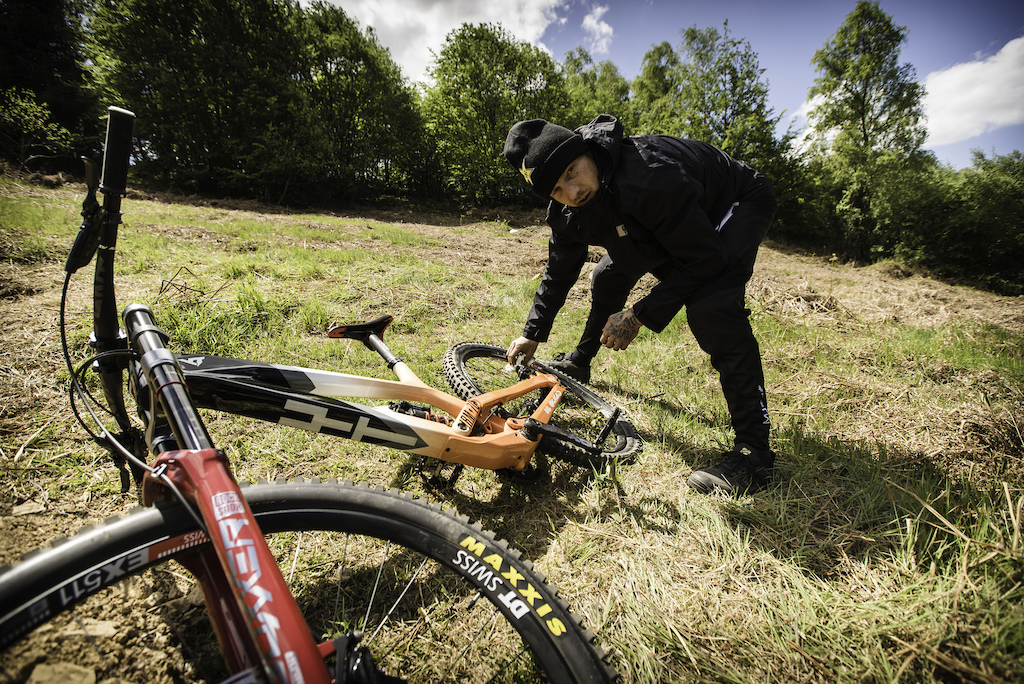 This year marks the 10th anniversary of the Tues with the V4L technology – a milestone in the history of the radical downhill bike that has carried many riders to podiums, medals, and titles. The bike has come a long way since 2008. Initial development took 12 months until the first aluminum Tues was ready to be brought to market in 2009. With 180mm travel and a Marzocchi 66, it was more a freeride bike than a downhill rig. 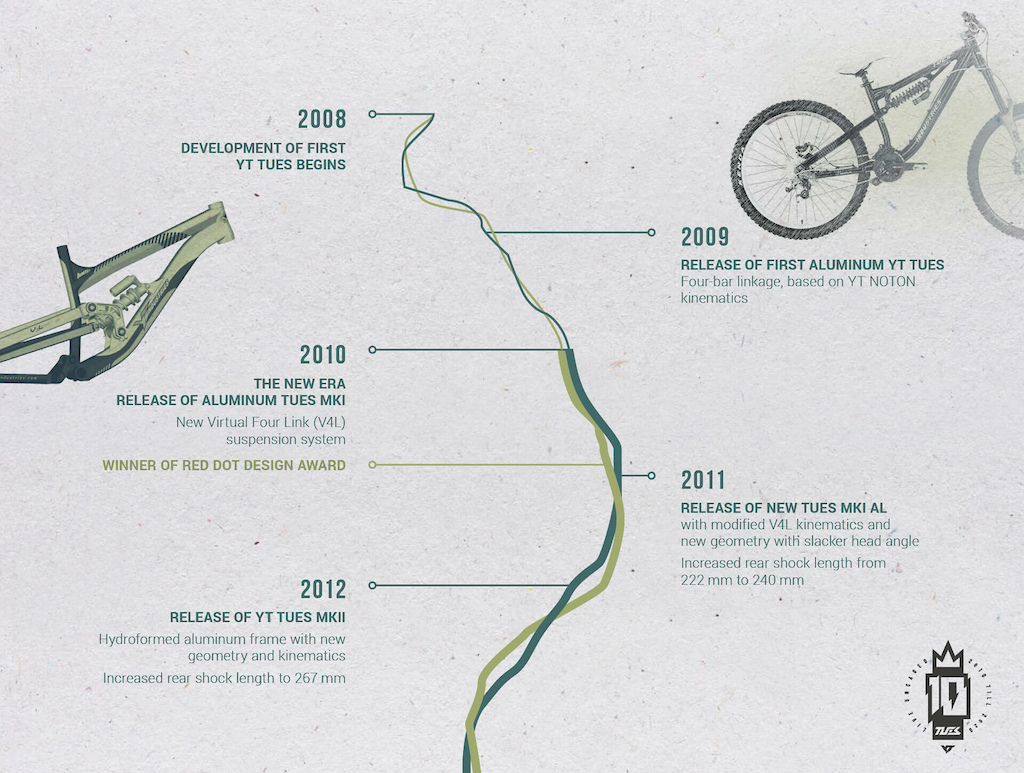 However, the former CTO Stefan Willared was not entirely satisfied, which resulted in a seamless transition and development of the Tues MKI.


This resulted in the evolution of the Tues from a freeride bike to a true downhill bike.


But innovation did not stop here. 2011 witnessed the release of the Tues MKI with improved V4L kinematics and an increased rear shock length from 222mm to 241mm, which unlocked even more potential and speed. Boundaries were tested yet again a year later with the release of the Tues MKII, the first hydroformed aluminum frame and even longer rear shock length (267mm). 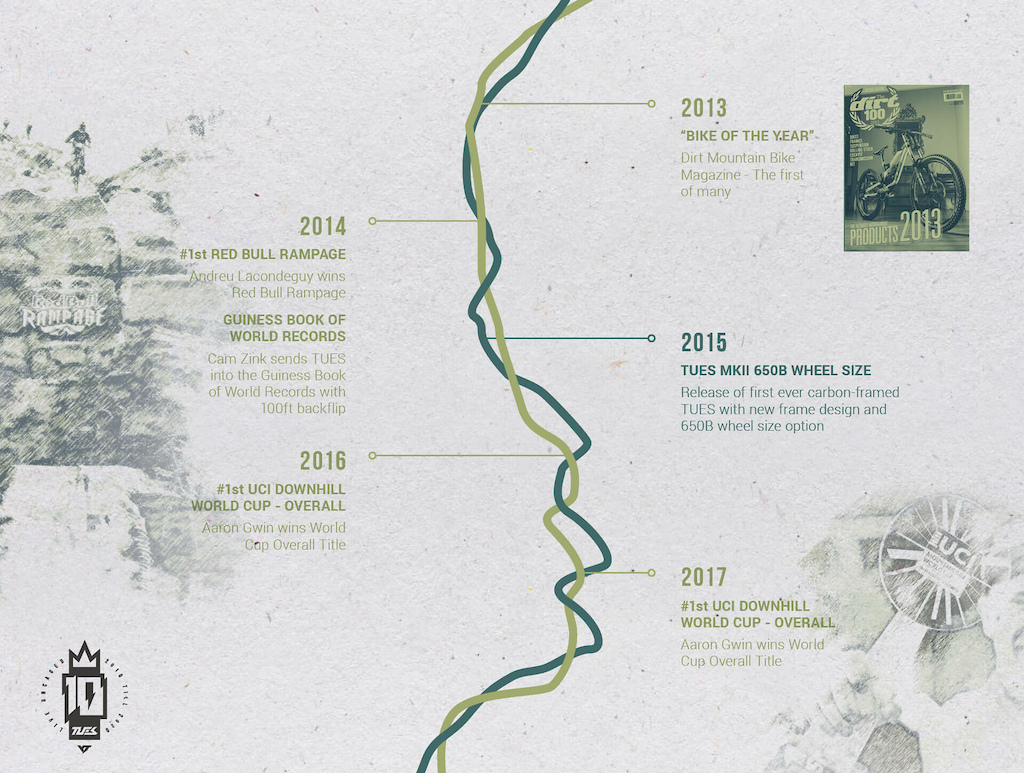 After major developments four years running, time was spent the next three years working on the next major milestone for YT’s Tues. Stepping into a new world of mountain bike manufacturing the first carbon Tues frame (MKIII) was released in 2015 along with the ‘new’ big 650B wheel size. 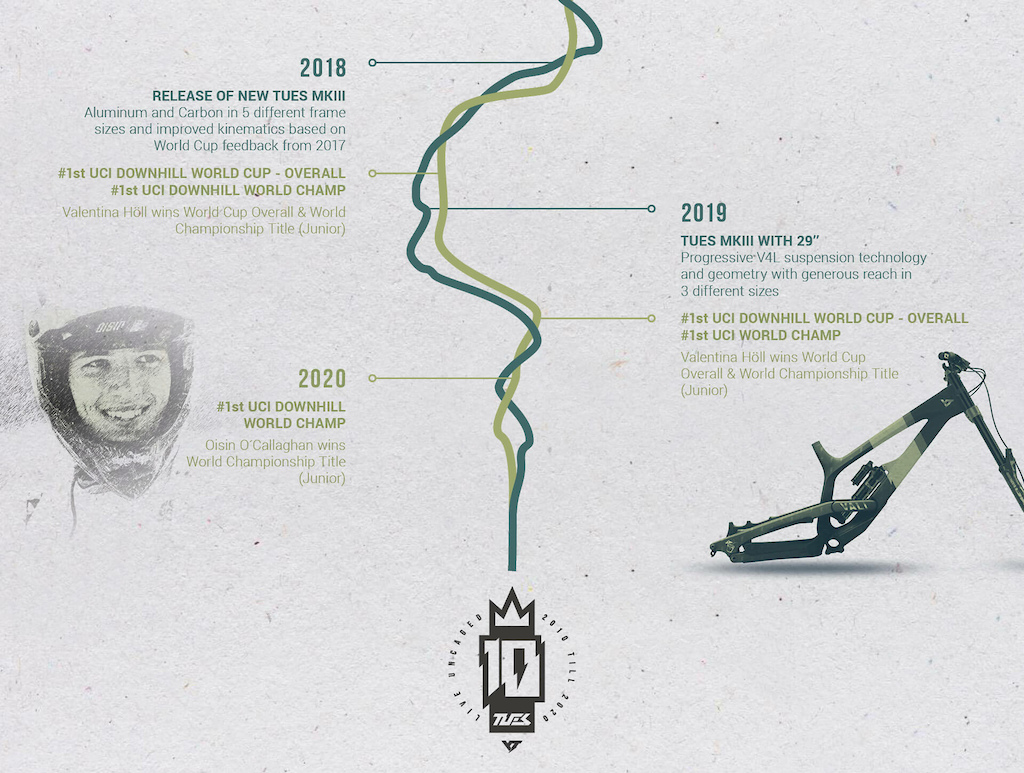 The latest steps in its evolution followed in 2018 and 2019. The Tues MKIII received a redefined aluminum and carbon geometry and for the first time, YT was able to offer five different frame sizes 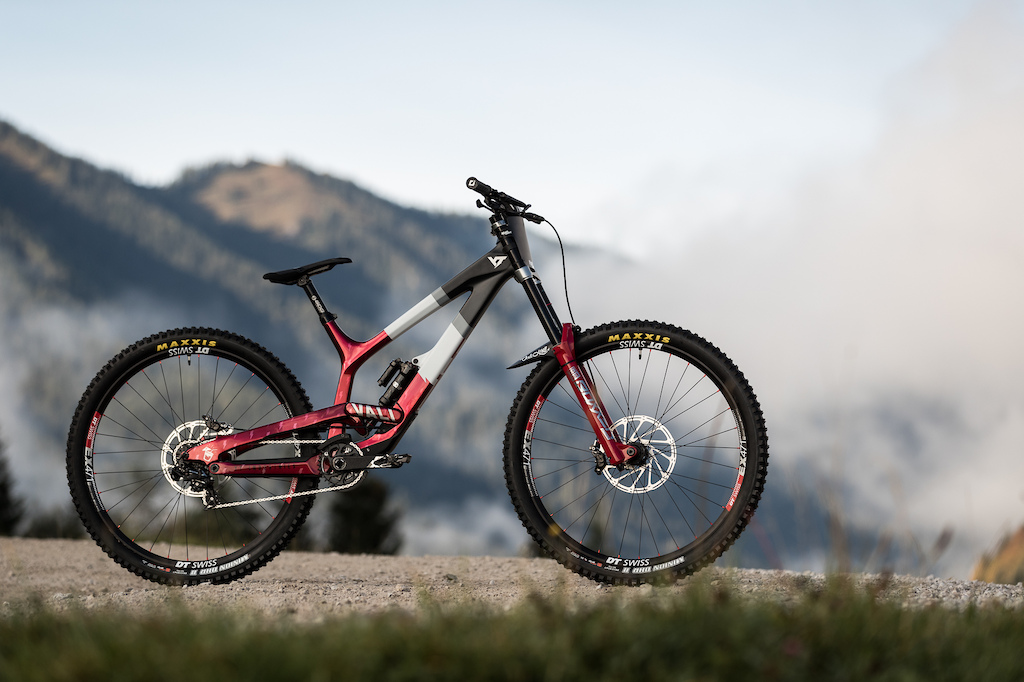 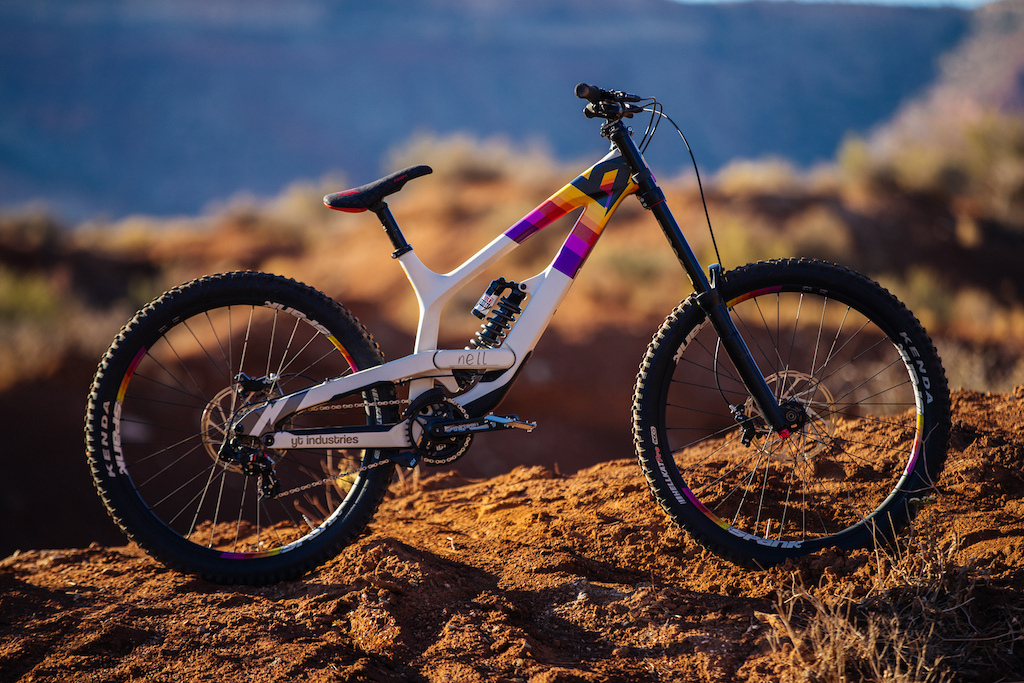 The inception of the 29’’ wheel size for the platform in 2019 was the latest major development for the time being. The Tues has changed considerably over the past decade and a team effort of passionate designers, engineers, and racers has created a downhill mountain bike capable of carrying the world’s best athletes to World Championship and World Cup title and Rampage glory. 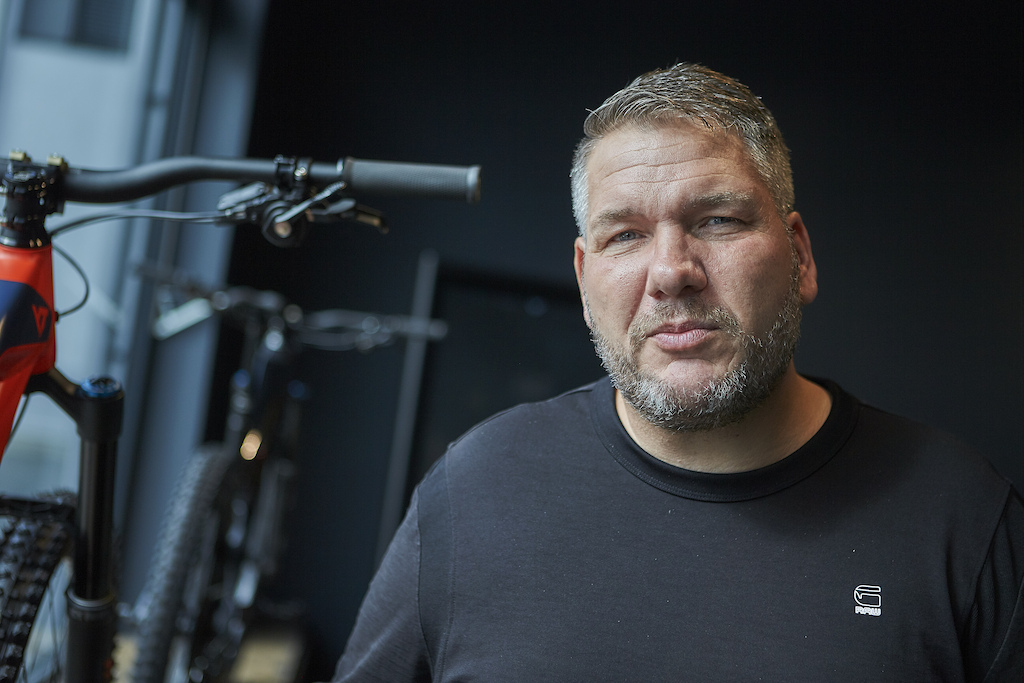 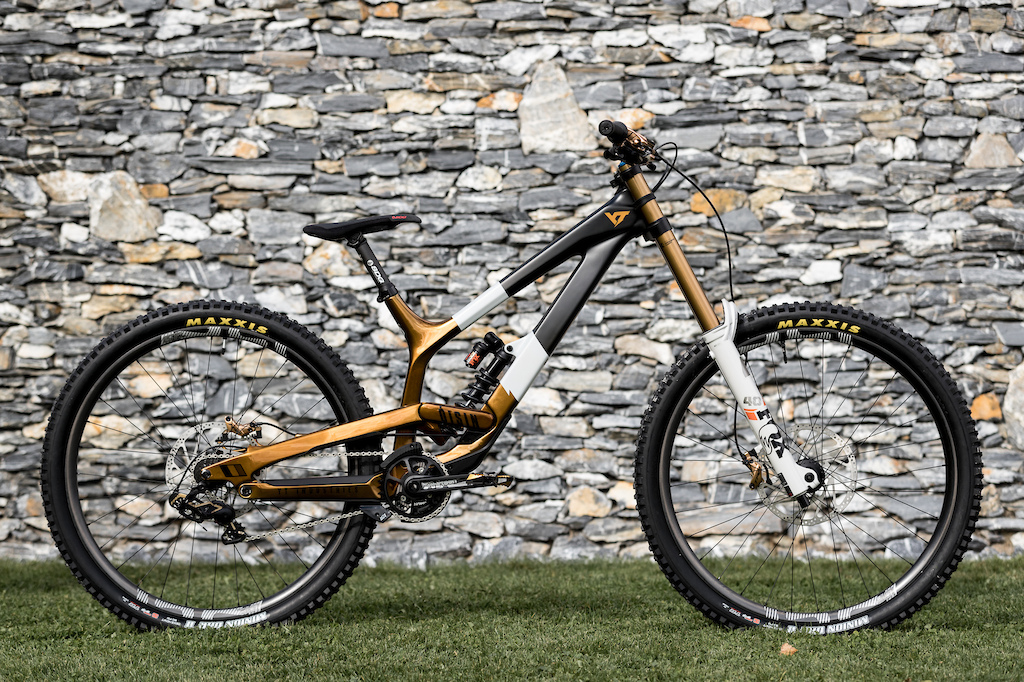 TechTrailRider (Dec 18, 2020 at 7:18)
It would be sick if YT made that 26" Tues link they make for their pro freeriders available to buy, it would make it an even more awesome park bike

BikeRipperVT (Dec 18, 2020 at 13:51)
@nvranka: Kinda think it makes the same sense as them not selling framesets either. It's to keep the relative cost to the consumer as low as possible (ie: not tooling up production for small runs or having to over produce to meet a more niche demographic). Look how much lower they keep their prices on complete builds Vs the "industry leading" offerings at $10k+ these days

jaame (Dec 19, 2020 at 9:46)
@nvranka: Yeah because they do sell nuts and bolts, gear hangers etc. They are priced accordingly. It's not like you get a spare mech hanger for 2 Euro or something.

Altron5000 (Dec 19, 2020 at 15:26)
@BikeRipperVT: You're right in a commercial/economic sense, but this is a brand that at one point had no trail bike and still had a DH bike (tues), a enduro bike (wicked/capra) and a dirtjump bike (dirtlove). They came up supplying dirtjump frames. If they can't afford to make a dirt jump specific tues, no one can.

bombdabass (Dec 20, 2020 at 8:14)
My Tues was the best DH bike Ive owned. Never understand the YT hate 'Im so angry that they disrupted the bike industry and brought value into the game, I want to pay twice as much and its not fair wah wah wah'. Newsflash, once you have owned one you realise you are paying double the price for nothing extra. And before you start again, you aint getting 4 grands worth of customer service for double the price...

drjohn (Dec 18, 2020 at 7:37)
I wonder how big of a role Aaron Gwin played in the development of the bike in its later versions/changes. But let’s not give credit to him or mention him much... come in YT!

stefkrger (Dec 18, 2020 at 9:36)
How would you know how much of a role he really played? If it was a lot they’d probably mention it. From what I recall he came in and said the bike was exactly how he liked it. The last upgrade since then was more of a cosmetic makeover plus adding a 29 inch version.

chriskneeland (Dec 18, 2020 at 9:38)
He won his first race on the MKII without any input. Sounds like they had things pretty figured out before he got there.

fracasnoxteam (Dec 18, 2020 at 9:58)
They made the bike for him considering what he did on his demo, read in an interview if my memory not too tired

suspended-flesh (Dec 18, 2020 at 10:32)
He mentioned in interviews that he felt right at home on the frame when he joined YT. He was a rider who's input was probably quite valuable but the winning platform was already there.

Altron5000 (Dec 19, 2020 at 15:35)
@fracasnoxteam: That tues and that demo were pretty different, if YT were trying to copy the demo they did a terrible job (the tues seems much better tbh):

endoplasmicreticulum (Dec 21, 2020 at 7:36)
Figuring out a bikes geo and leverage curve is no rocket science. 10 people that know what they talk about will come up with 10 different bikes, and all of them are going to be good for some type of rider.

DoubleCrownAddict (Dec 18, 2020 at 10:54) (Below Threshold)
@suspended-flesh: Yeah, and Cam attempted to downplay it. Not a good moment for the mail order brand, I think every rider riding a YT crashed that year at Rampage. See this discussion on reddit...

TypicalCanadian (Dec 18, 2020 at 11:13)
@DoubleCrownAddict: so basically just like when Minnaar broke his Santa Cruz in half a couple years ago during practice and they threw a blanket over it and rushed it away, was that “not a good moment for the brick and mortar bike shop brand”?

stefkrger (Dec 18, 2020 at 11:13)
@DoubleCrownAddict: did you even read what you just linked? Apparently it was a guy sponsored by Trek who removed the bike from camera angles.. Also any bike can take just so much abuse. Many bikes break at rampage every year. From this year I recall at least one Scott Gambler that broke during practice. It’s physics. If you put that kind of force on your fork it will snap the head tube. Not matter if alloy or carbon and no matter the brand.

suspended-flesh (Dec 18, 2020 at 15:16)
@DoubleCrownAddict: If I remember correctly, homie cashed super hard on his first run and broke the same frame on run 2. You only get 2 runs, so yeah he was out. I was drinking then so I could be wrong.

Actually here is a snip from PB article about that year:

This year though we saw several high profile failures. Brendan Fairclough's custom painted alloy Scott Gambler appeared to succumb to a vicious case of his canyon gap in practice, and he had to ride his carbon World Cup bike instead. Even more high profile, Bienvenido Alba's carbon YT Tues experienced a catastrophic failure during the live broadcast as he cased a front flip in his second run. I'm still not sure why the broadcast team didn't want to discuss it; the broken bike was clear for all to see, and sports marketing is always a high risk, high reward game. And finally, Carson's tire failed after an almost perfectly stomped 360. I'm not sure if it was already compromised, but it seemed cruel that he wasn't able to finish an absolutely incredible run.

kroozctrl (Dec 19, 2020 at 3:27)
Wrong the steerer tube snapped in half NOT the tues frame. There’s an article on this on pinkbike you know. You can even fish out that guys pics on IG.

TypicalCanadian (Dec 19, 2020 at 11:20)
@DoubleCrownAddict: ahh ok, totally explains the rage-posting you do on every single article that mentions YT, very rational.

DoubleCrownAddict (Dec 19, 2020 at 13:32)
@TypicalCanadian: Thanks for understanding that they are such a shit company in every way except marketing.

TypicalCanadian (Dec 19, 2020 at 15:11)
@DoubleCrownAddict: you could maybe try just not buying their bikes, but if you would like to continue bawling in every article about them, do what you gotta do.

monkeybizz (Dec 19, 2020 at 20:07)
@TypicalCanadian: Did you not read the trustpilot reviews? I mean they've just proven themselves again and again that they're a scumbag company who shouldn't exist, but hey what do I know ¯\_(ツ)_/¯

suspended-flesh (Dec 19, 2020 at 20:35)
@monkeybizz: What you seem to know is what you hear from a vocal minority of online complainers. I would be one of them if I felt I got a raw deal from YT. Customer Service. I haven't had to in 5 years. Satisfied customers generally don't go out of their way to praise, but the upset ones head online to vent. Pick a new battle skante warrior...

TypicalCanadian (Dec 19, 2020 at 21:03)
@monkeybizz: ok apparently I missed the part that article where it articulated that those reviews were from every single person who ever owned a YT.... oh wait.

9th pic down. Head tube clearly attached to the fork steerer, stem and bars still present. Nothing left on the top and down tubes.

That being said, and as others have pointed out, no shame in a bike breaking at Rampage, especially after 2 under rotated flips with terrible landings. It happens to any bike in this moment.

Last, I love my Jeffsy, which rides fantastic and has help up beautifully for 2 years now. I don’t see much diffs between YTs reliability and other brands I ride or have ridden. Terrific bikes as far as I can tell, especially considering the price point.

suspended-flesh (Dec 18, 2020 at 10:33)
Stoked I picked up a MKIII on a Black Thursday sale a couple years back. Don't see ever needing to replace it.