Photo Synth35is; a film-photography, mountain bike zine. All photos featured have been shot on 35mm or medium format film. Printing a mountain biking zine is something we've been talking about doing for a while now. Stoked to say that it's become a reality. With the help of good friends, who are also keen film-shooters, we've managed to put a little something together.

For the first volume of Synth35is we had four contributing photographers; Simon McLaine, Corbin Selfe, Hannah Goto and Tom Wilson.The variety achieved by featuring multiple photographers was a big motivator for this project. Each photographer brings a unique perspective to how they approach shooting bikes on film. We also know there are plenty of people out there shooting mountain biking on film cameras, and we hope we can share more people's work in the future.

Shooting film is something not everyone gets...and we totally understand their perspective. It often goes something like this...

"Why would you shoot with out-dated technology that will produce an end product with guaranteed defects”.

They're completely right, the images are far from perfect but the character that these imperfections bring can also be the most valuable asset. Also, when you’re expecting imperfections, a photo is rarely (or never) ruined. If you under expose or slightly miss focus the value of the photo isn’t lost. There is so much going on in film photos- like grain, light leaks and weird flares. All of which could be seen as “issues” with the photo. When you’re expecting imperfections you stop looking for them and start to see the actual story being told in the image.

The mountain bike media world is filled with pristine images of the highest visual and technical quality. For good reason too; a large majority of these images are tools for brands to help sell their products as part of marketing campaigns. You might be hard pressed to win a marketing team over when you tell them you'll be shooting their content on cameras from the 70's that may or may not work. 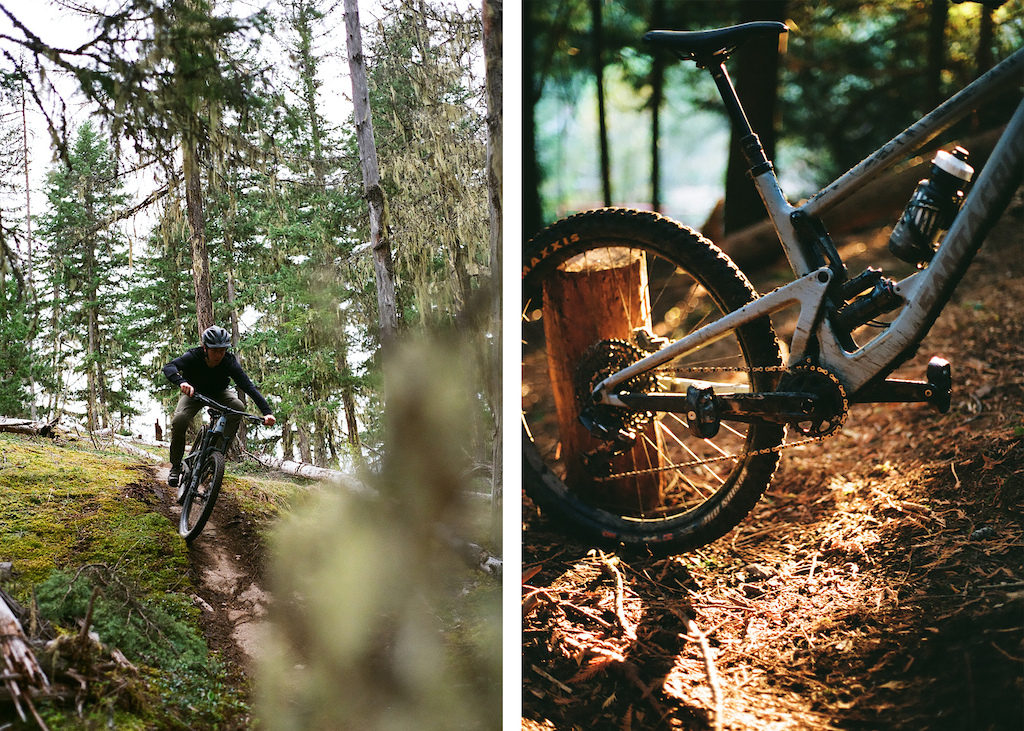 But if you're solely shooting for your own personal enjoyment and there is no client in mind, get the film cams out. The first big pro is that they're cheap (most of them at least). You can pick something awesome up for $100 or less. If you crash and break it, the wallet won't take too much of a hit replacing it. These cameras are often small too, a lot of analogue point and shoot cameras literally fit in your pocket. But the biggest plus for shooting film, for us, is that it changes the way you shoot. With film cameras it's often hard to shoot action shots, as the film ISO speeds don't always allow for fast shutter speeds (needed to get a clean crisp image). On a digital camera you can easily change this, where as with film, it’s not an option once the film is loaded.

With this is in mind you start to take photos of the environment and those around you. Photos that are more friendly to slower shutter speeds, often things not moving fast. For example, your friends engaging in pointless trail side banter. Or the environment we're super lucky to be able to ride our bikes in. You start capturing moments from your rides rather than searching for banger action pics.

Getting photos whilst out riding, usually entails hitting a berm or jump 15 times to get the "sickest" shot possible. This 'stopping and starting' repetition can take away from the experience of going for a ride with friends. Like in the above example, sometimes you get stuck taking photos and it interrupts the flow of the ride. On a digital camera you take a photo, stop, look at it, pick out something you don't like and decide to re-take the exact same photo 10 more times. With a film camera you're limited to the amount of frames on the roll of film. You're not going to waste time taking multiple photos of the same thing, you just don't have the frames available. Each photo costs physical money too- so you can't be taking multiples of the same thing! Also there's no digital screen- you can't look back and see if it was good or bad anyway. Take a photo and carry on. A huge plus for the enjoyment of the ride as well as a nice surprise when you do finally develop the roll.

Putting this zine together was truly an enjoyable experience and has only emphasized that this form of photography is something that is difficult, but well suited to mountain biking and the lifestyle that follows it. We're looking forward to doing another one of these in the not too distant future. If you shoot bikes on film, please don't hesitate to contact us. We need more film nerds to join the fun.

Cool to see mtb culture growing into its skin. Not quite at the level of Skateboarding/ surfing/ snowboarding but it’s getting there. Always cool to see different styles of riding and media out there.

bennorz (Nov 21, 2021 at 23:28)
This whole "that will produce an end product with guaranteed defects" is such a cheap cop-out imo.
Photographers have been creating "flawless" images on film for literally decades. Is it more difficult than digital? Yes, but once you know the craft analogue photos can be just as good if not even better* than digital.

* I'm not totally up to date, but last I've known the dynamic range of film is still unmatched and to get the resolution of a good mf scan, you'll have to dabble in 5-digit digital camera-backs

browner (Nov 22, 2021 at 1:21)
Agreed, really pisses me off that people think film and immediately think of cameras from the 80's. Do they realise Digital lagged behind film for the whole 00's in terms of tech. What the last film Canons and Nikons can do is still literally incredible like landing on the moon with a calculator.

waldo-jpg (Nov 22, 2021 at 7:55)
100% agreed. I think it is mostly because people accept film as an old technology and something they do on the side for fun to embrace the imperfections and surprises of shooting film with a average, consunmer level equipment without the huge investments needed for perfect results.
you can get insanely high detail from medium format slides if you invest in a professional workflow with a drum scanner, professional color grading etc. 12 shots at a time, but that is very inefficient to get the 'clinical' look & since very high quality digital cameras are available widely and cheaply nowadays people opt for digital to get that (except from many professionals who still swear by film for professional work).

Most people who shoot film like the surprise and nostalgic feel and look of photos processed by a minilab and digitized on a noritsu, frontier or even homescanned which will inevitably lead to some imperfections & color casts, but has you involved to some degree into the creation of the photos. + Every film has some inherent characteristics that are just fun to explore and learn about.

I choose film because i hate the clinical look of digital photos and i love the tactile experience of mechanical cameras, film winding, hand developing and bringing the images to life. I have exclusively used film on my last few vacations and have been in love with the results, i even decided against bringing film to Japan for example, i think i would've hated most of my photos had they been shot digitally and looked 'true to life'.