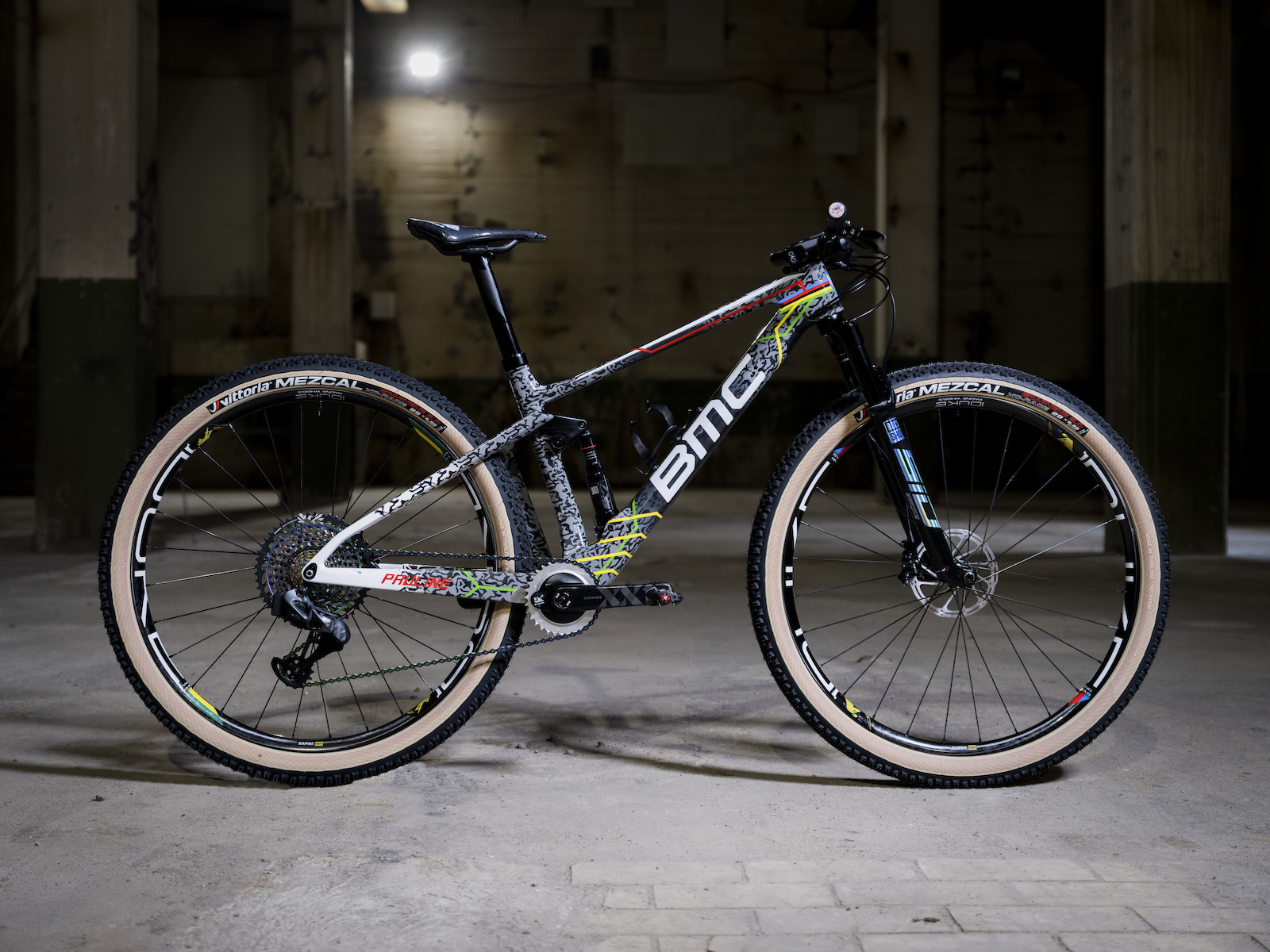 To design a bike that celebrated Pauline beyond just recognizing her mountain of riding achievements, BMC teamed up with an artist whose medium is tape and who is known by his pseudonym, No Curves.

The design process started with a series of rapid-fire questions to Pauline who had to respond to No Curves using pictures. The artist honed in on Pauline’s calm confidence and strength, adorning the headtube with a panther to represent how she interacts with the world around her.

Naturally, as she's no stranger to the rainbow jersey and in 2015 was the first person in cycling history to simultaneously hold the XCO, cyclocross, and road World Championship titles, the design needed to include some rainbow stripes to punctuate the bike's bold patterns. 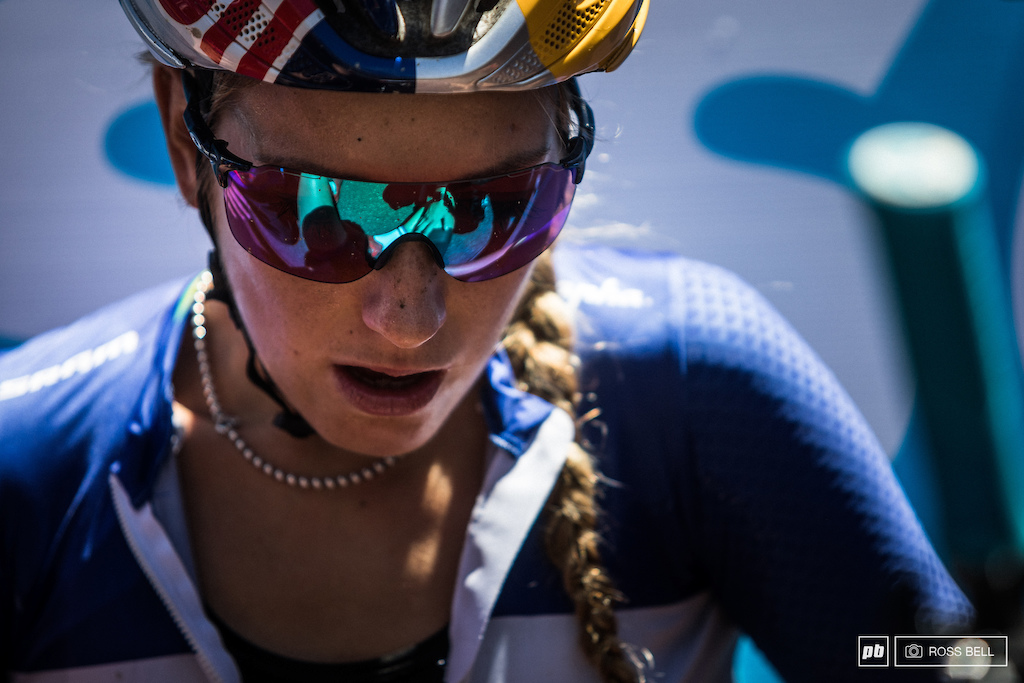 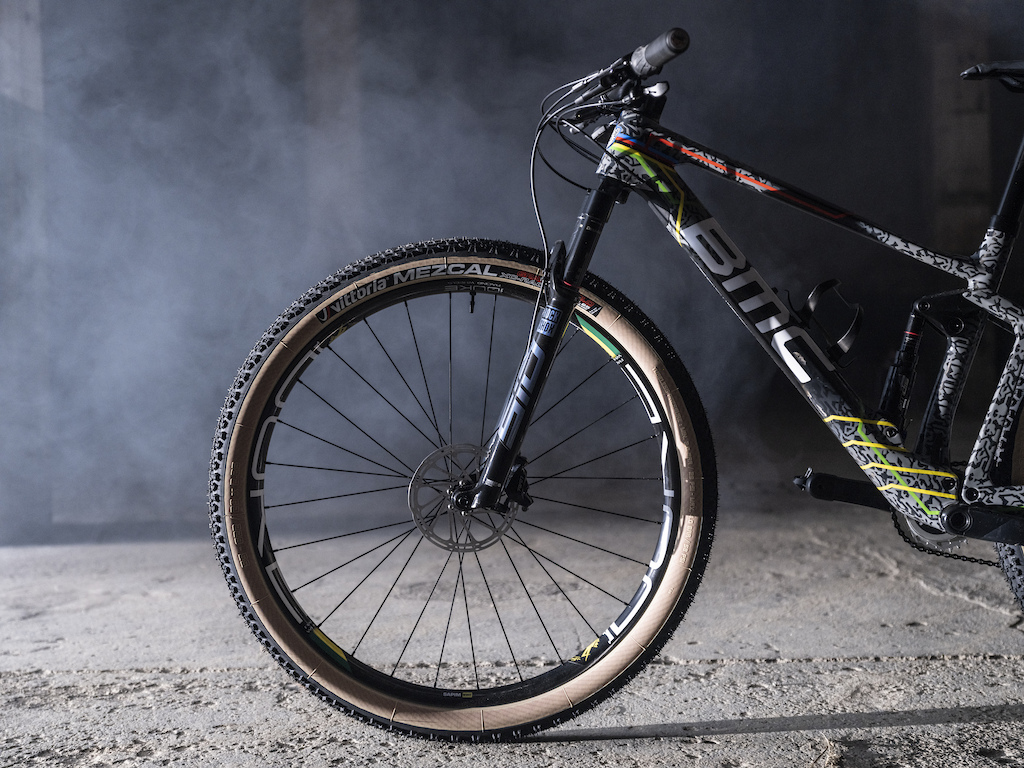 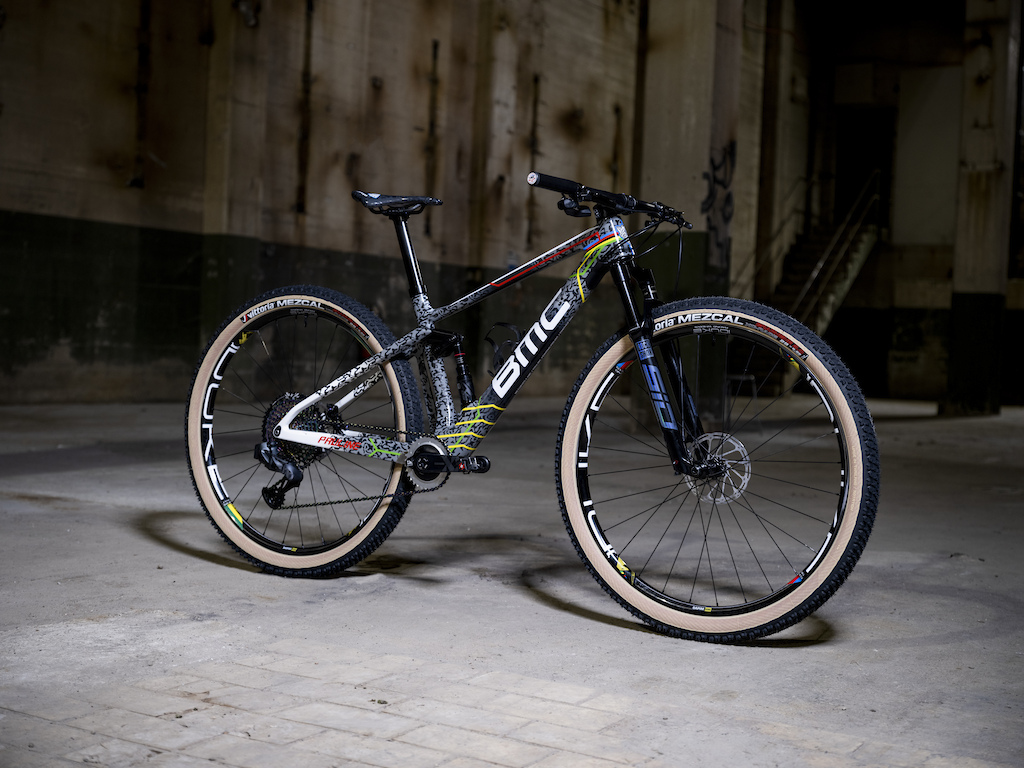 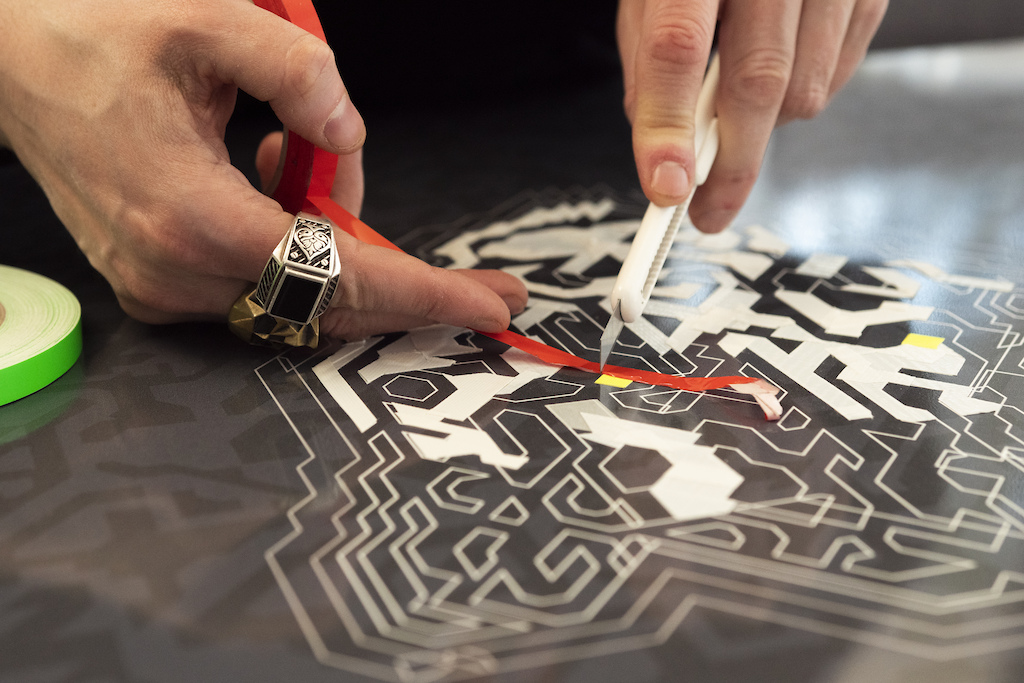 The Italian artist No Curves meticulously cut the design from tape. 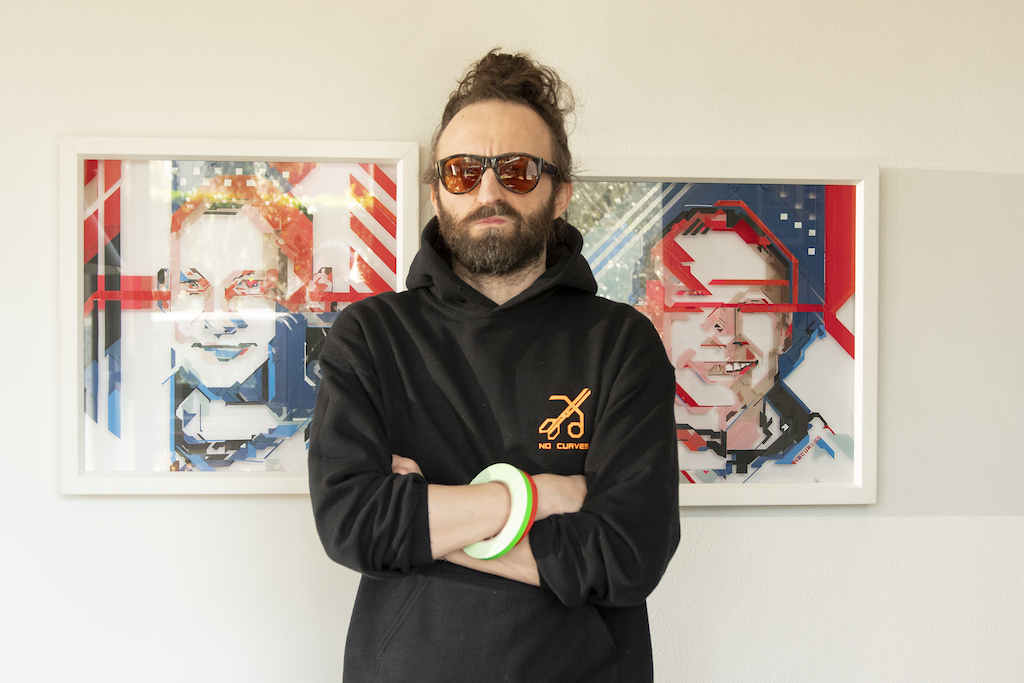 No Curves describes himself as a geometric tape artist and is known only by his pseudonym.

From BMC: 5 Things You Should Know

1.The vibrant colour palette makes use of her rainbow stripes, representing all of the continents, and Pauline’s fiery character.

2. Not only a nod to the bikes’ natural terrain, the deconstructed mountains at the junction of the downtube and the seat tube represent the new challenge with BMC, the highs and lows of the sport and how easy it is to go from one to another.

3. The panther on the head tube represents Pauline: super calm on the exterior but with an internal rage ready to be unleashed on race day.

4. The BMC logo stays true to its DNA on the downtube but is joined by Pauline on the chainstay and a discreet signature by No Curves.

5. Ensuring full compliance with the UCI World Champion stripes was worth breaking a sweat over and well suited to No Curves’ tape art approach. 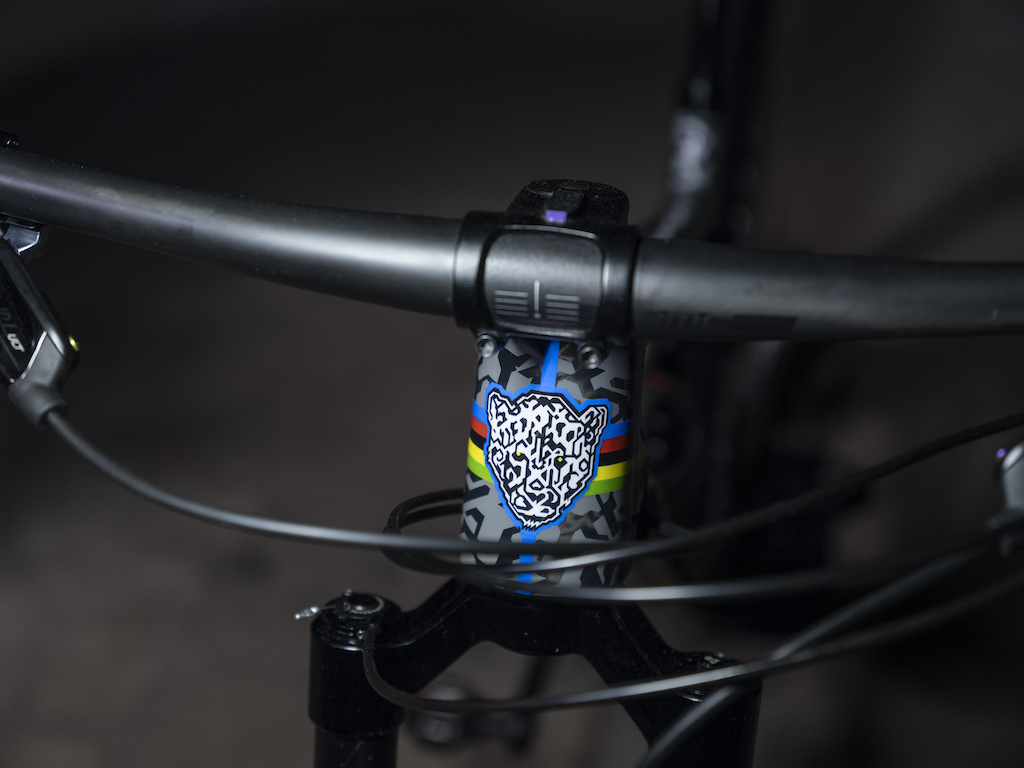 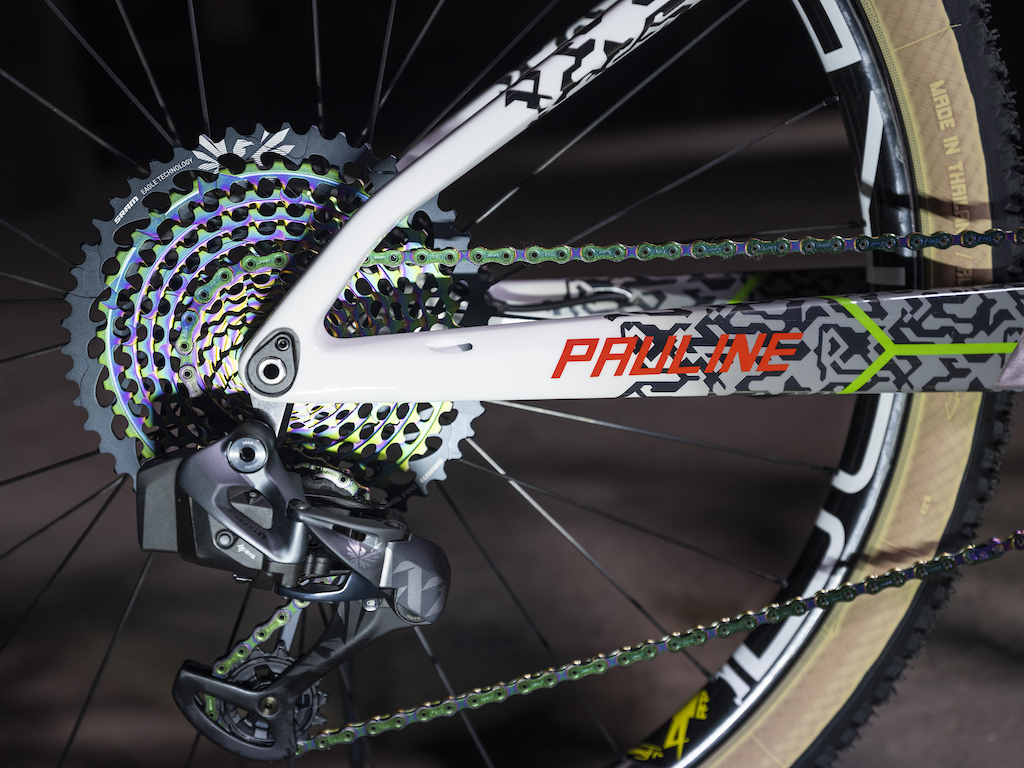 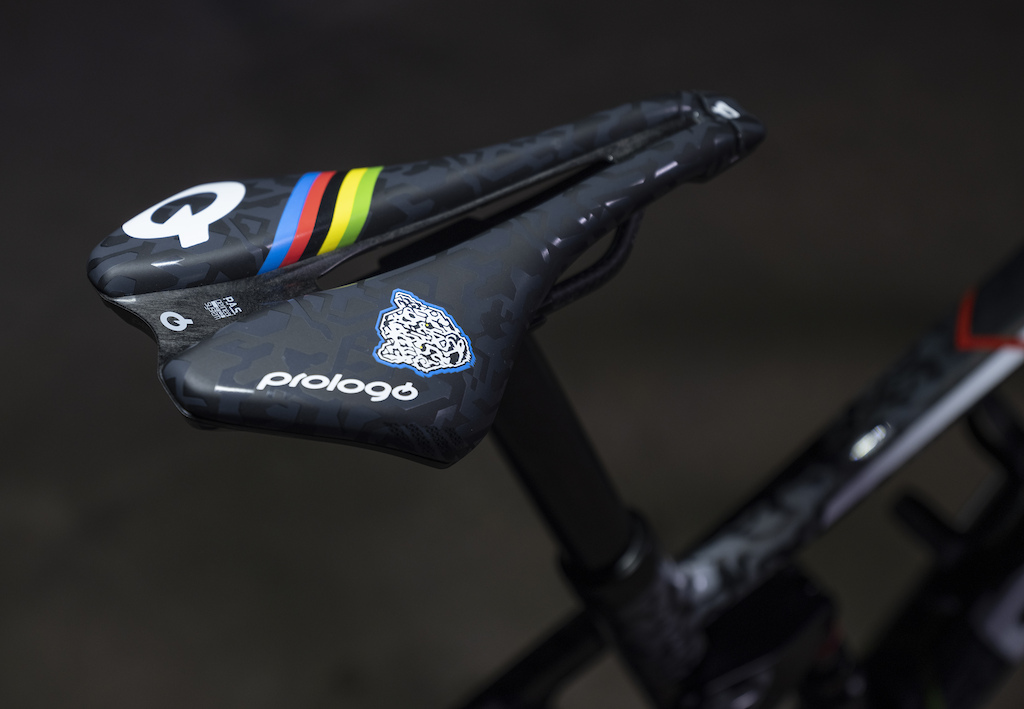 No Curves aimed to create a bike that perfectly captured Pauline's personality and her stellar racing career. 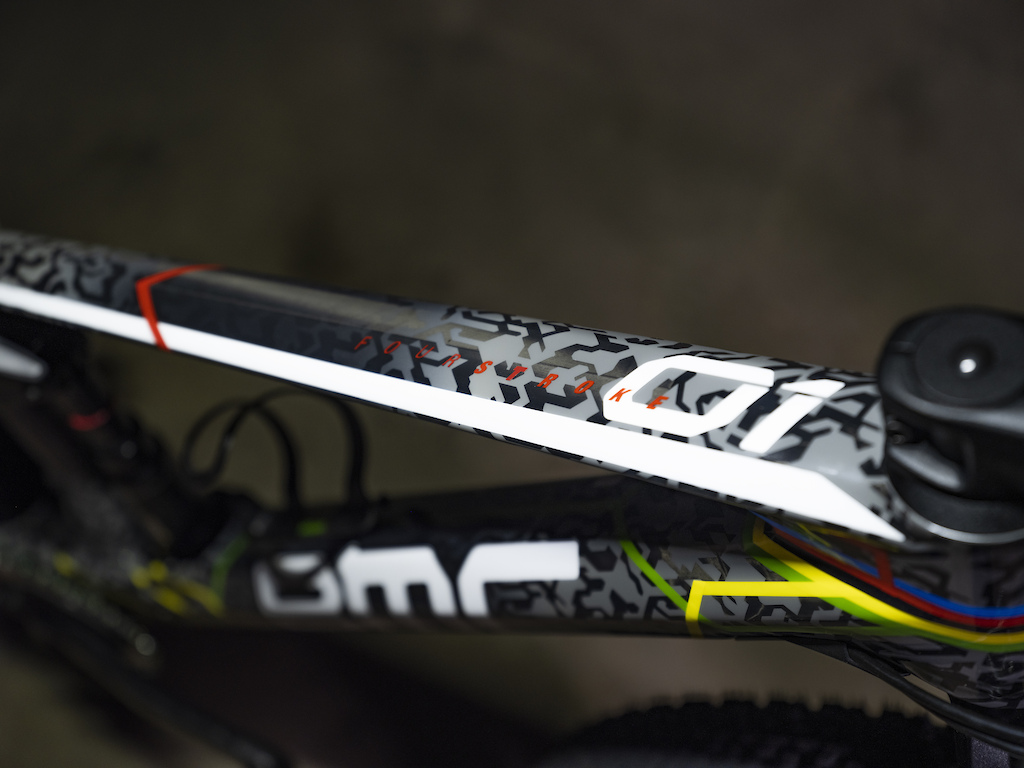 Geometric tape artist. Like EvH on his guitars. Spider webs. Fenceposts. No Curves!

PFP’s muscle thing hit the wrong member of this collabo for sure. No Curves.

Imagine being less fun than BMC!

billreilly (Apr 24, 2021 at 16:27)
@mtallman2: Are you for real?... She's the greatest female bike racer in history, 6-time world champ, the defending XCO world champ and she had to get off her bike twice in one race uphill on a few roots (where everybody else had to dismount as well) and you're giving her shit?

mtallman2 (Apr 24, 2021 at 19:38) (Below Threshold)
@billreilly: yes, I’m for real. She showed throughout last year in WC and Euro Championships she can’t ride tech. Other riders behind her dismounting because she’s clogging up the trails isn’t their fault. She’s got power for days, no question, but bike handling is not strong. You won’t convince me otherwise.

ReformedRoadie (Apr 25, 2021 at 10:49)
@arcyeti: I honestly could not give any less of a shit what some anonymous guy from the France thought of me via the internet...adieu

Pedal-Bin (Apr 25, 2021 at 2:09)
Aw heck... I was so drunk when I posted last night I didn't even remember. Just saw DASHBOARD lit up this morning. Sorry for the negative post, People should be free to express themselves however they want without crap from idiots like me. Let this be a warning to all the youngsters out there... don't drink and comment.

billreilly (Apr 24, 2021 at 16:32)
Vinyl stickers weigh about the same as paint, so the difference is almost nothing.

I don't think that word means what you think it means.

hardtailparty (Apr 24, 2021 at 12:44)
I think it looks fantastic and I appreciate hearing the thought that went into it.

I find it hilarious that majority of "modern" artists think they are original. "Art is theft." Picasso

danstonQ (Apr 24, 2021 at 13:52)
Comment section is a festival of dumbness and hatred for this one.
For once that a custom bike looks arty and classy...
I guess some people prefer wasp or trout painting "artworks".

JesperA (Apr 24, 2021 at 15:02)
I'm always curious how narcissistic someone has to be to get upset that other people have a different taste than oneself, even to the point of calling other people "dumb" for not having the same visual preferences

Some people did not like the look of this bike & that's okay...nothing to get upset about

BTW: i don't think classy means what you think it means

I didnt like the wasp, but you can't deny that paintjob took time, talent and skill...and taping skills on top of it. Im not going to bother hating on a 100 hour paint job that I dislike, but low effort "art" like this is genuinely insulting to the senses.

This bike looks more like someone paid to get his name out there. I strongly doubt Pauline was on a waiting list.

zede (Apr 26, 2021 at 2:13)
@JesperA: you should have tried reading his comment a tad better. What he called dumb is the way people are hating so strongly on the bike, the artist and Pauline.
You have to be pretty narcissistic to think it's ok to hate on people for not having the same visual preferences.
Btw: I don't think "classy" is used anymore for what is means, and I don't think you should feel so good for making fun of a non native speaker. Not very classy

RonSauce (Apr 26, 2021 at 5:49)
@zede: im a studied, skilled professional artist. Nothing armchair about it, been paying my bills with art for about 20 years.

What are you, the armchair comment critic? How is that career working out?