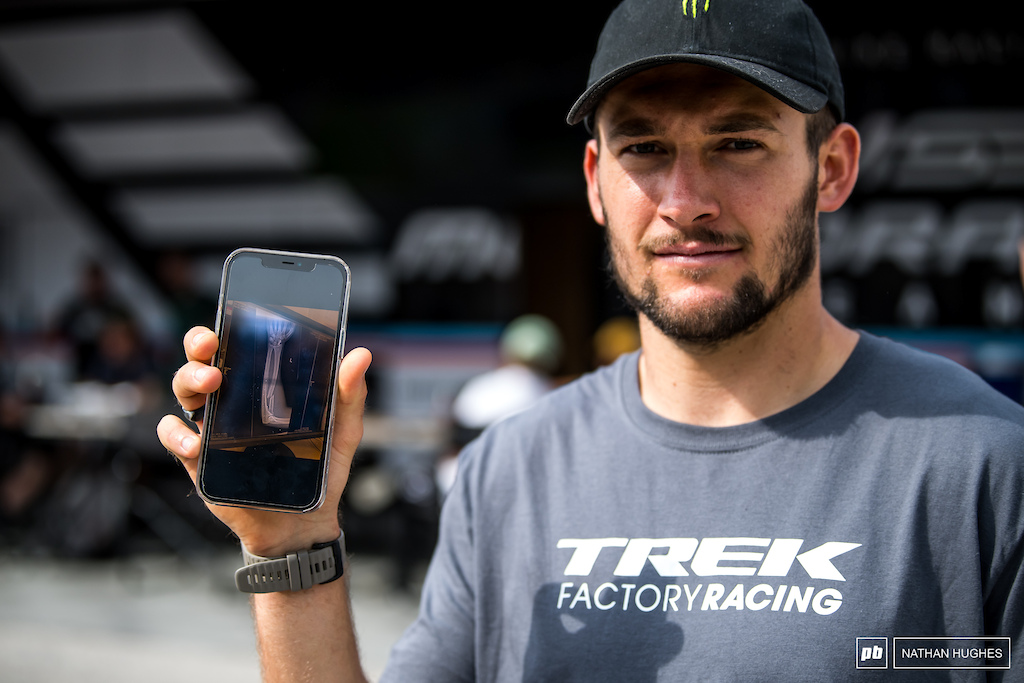 Charlie Harrison broke his arm in practice for the Leogang World Cup and is headed in for surgery today.

Earlier this season, he took the win at the Tennessee National race to kick off the US DH season, edging out Dakotah Norton, Steve Walton, and Aaron Gwin. He also won the first Northwest Cup race this year in Port Angeles, Washington. It is especially sad to see him out of the running right now, since he looked like he had an amazing season ahead of him.

It's also not his first time injuring his wrist in Leogang. In 2019, he crashed in his last practice run before finals and raced despite the pain, and learned he'd broken his scaphoid when it swelled and became so painful over the next few days that he had to get it checked out. It's very unfortunate that he has to be in this situation again, but the silver lining is that he does know how to recover from a setback like this and come back stronger than ever, as he showed us with his strong results in 2020 and thus far in 2021.

We reached out to Charlie for more information and he said he will update us after the surgery. We wish him all the best in his recovery and hope to see him back on the race tracks soon.

TheMrSteve (Jun 14, 2021 at 11:58)
Aww that sucks, he was looking good for a great season. Hope the recovery goes well and we can see him tearing it up soon.

Wrist brace, I wear a mobius x8 on every ride now after I fractured my scaffold last year.

src248 (Jun 14, 2021 at 11:23)
There's been a crazy number of injuries this year, though I suspect it's more to do with how crazy/empty the competition schedule has been rather than their body armor.

HB208 (Jun 14, 2021 at 11:24)
@stokedrightnow: Fair enough, maybe it makes sense for downhill guys to wear those. I am always sketched out that the impact of a fall would just transfer to my radius or ulna.

vp27 (Jun 14, 2021 at 11:29)
@HB208: Looks like he broke his radius in this case. Tbh, not sure what protection you could use. I broke my ulna wearing elbow and forearm guards. Unfortunately it's the nature of the sport. I think the best is to "learn" how to fall. Sports such as judo and gymnastics are excellent at teaching this. I started biking too late and just don't fall very well. My brother who rides horses, falls way more but just knows how to adjust for the impact and not get hurt. I'm sticking my kid in some judo classes the moment he's old enough.

c-radicallis (Jun 14, 2021 at 11:30)
No protection can prevent a fracture of the radius. The only protection for such fractures is being strong.

sino428 (Jun 14, 2021 at 11:32)
Hard to know if padding would have helped without seeing his crash and how it happened but based on that x ray it looks like only maybe a full forearm guard might have helped. These guys could certainly wear a little more protection but when you get to the level of full arm guards and armor suits the stuff does get pretty bulky. I can fully understand why a pro racer would not wear all that stuff as it would no doubt make s difference in their riding.

Kmccann137 (Jun 14, 2021 at 11:34)
@vp27: Yes I took martial arts as a kid and the first thing you learn is how to fall. Interestingly the body will also subconsciously adjust to "sacrifice" another body part to protect another one. In this case, wearing elbow pads AND having falling skills will help prevent this type of injury because a trained person will learn how to transfer force to the padded area.

friendlyfoe (Jun 14, 2021 at 11:41)
@Kmccann137: I never quite understand this argument. When you get spit off anything two wheeled you have no control.

Also speed is the mechanism of injury here. More people are getting hurt because everything bike keeps getting better and they can go faster every single year. Elbow pads are a good idea though. The metal plate in my elbow also agrees.

Kmccann137 (Jun 14, 2021 at 11:44)
@friendlyfoe: Is there any video of it? I bet he had more control than you think. Now does he know how to fall? Probably but I mean the guy is only 23 I'm sure there are things he doesn't know. What I don't understand is the surprising lack of armor these guys wear considering how fast they go.

friendlyfoe (Jun 14, 2021 at 12:01)
@Kmccann137: not sure with this specific crash, but just generally speaking. If you lose the front it happens fast and you usually hit the ground before you even have time to react. When you get spit over the bars you usually are like a rag doll. Maybe something to learn about not putting your hands out to prevent hand/wrist injuries, but at modern day speeds that probably means broken collarbones and shoulders instead. Would never be bad to learn how to fall but in my opinion the sudden loss of any contact point to pivot off of makes it very difficult to control a fall in any way.

And yeah for dh chest and elbow protection should probably be mandatory. Nothing stopping guys from wearing it though! I'm sure it would throw guys off at first but you get used to it. I wear mine on every ride after completely separating the tip of my elbow on a rock.

Not for this hombre.

c-radicallis (Jun 14, 2021 at 13:30)
@KK11: I don't think so. It's just that you no longer see the protection that riders are wearing because now it's all soft pads worn under the clothes(even torso armor) instead of plastic shell stuff worn without any other clothes covering it.

ryetoast (Jun 14, 2021 at 14:08)
@tacklingdummy: I was going to suggest an implanted adamantium skeleton with retractable claws, but your idea seems less invasive.
Post a Comment