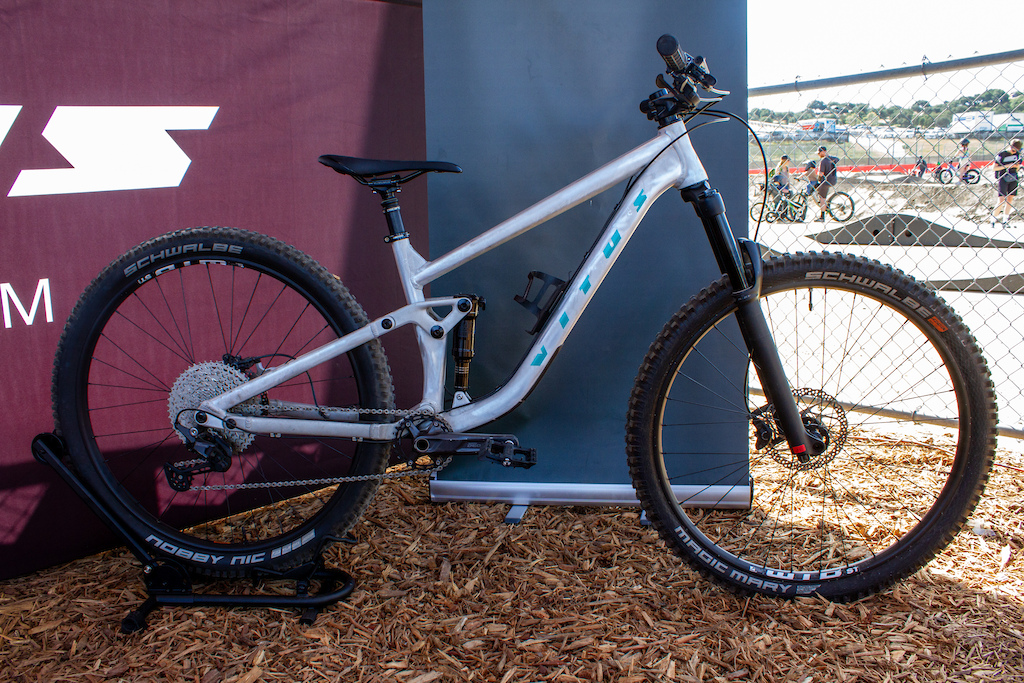 Sea Otter is one of the best places for spotting unreleased bikes, and this year is no exception. This one from Vitus isn't exactly sneaky - note the 'prototype' on the top tube - but it is something new from the British consumer-direct brand, so we stopped by to learn a bit more. 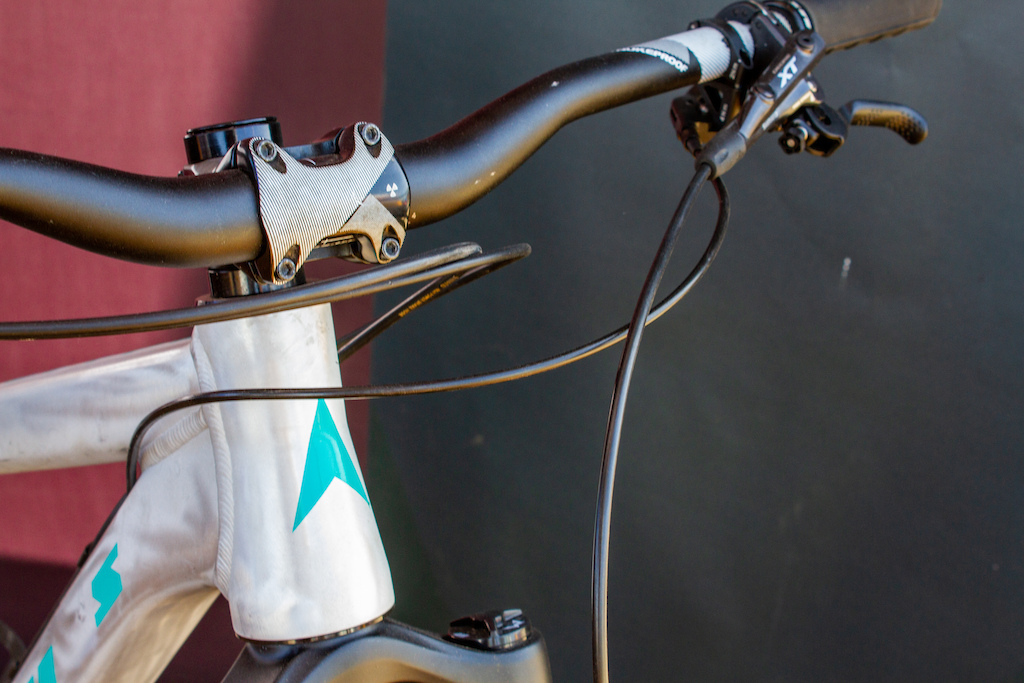 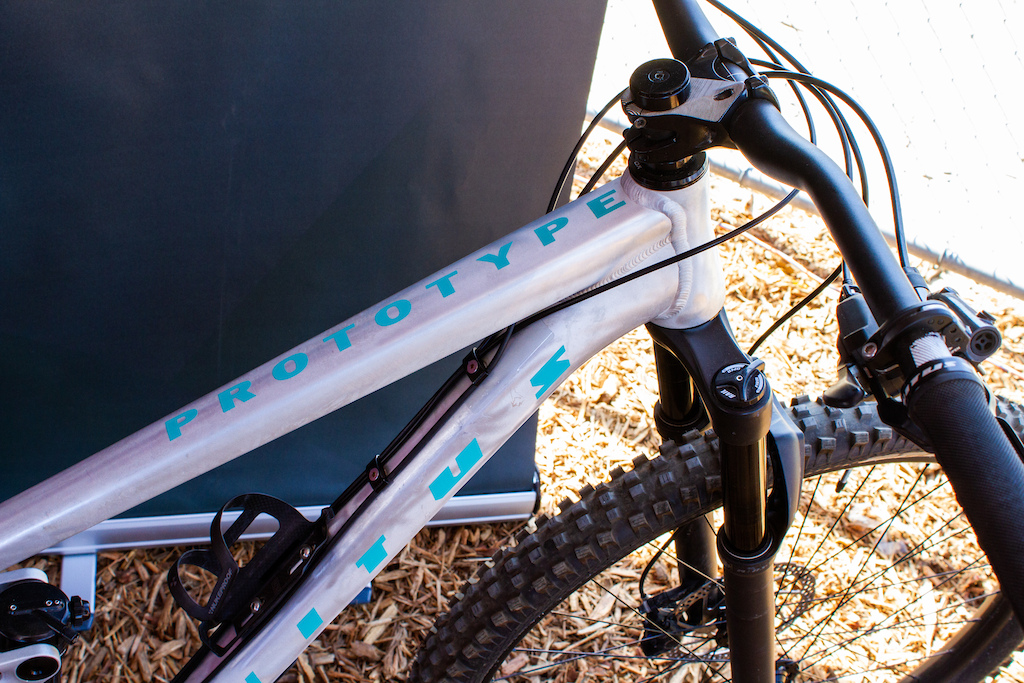 This raw aluminum bike is in its final stages of development and will be a 140mm trail bike that rolls on either 29" or 27.5" wheels - customer's choice. It looks noticeably different from Vitus's current 140mm bike, the Mythique, thanks to the now-straight top tube, but there are a few other key differences, too. For one thing, Vitus opted to use a metric trunnion shock and spec a UDH on this latest bike. It's also slacker than any trail bike Vitus has made in the past with a 65.5° head tube angle and a steeper (but unspecified) effective seat tube angle.

This prototype uses the same Horst Link suspension layout as the rest of the Vitus full suspension lineup. 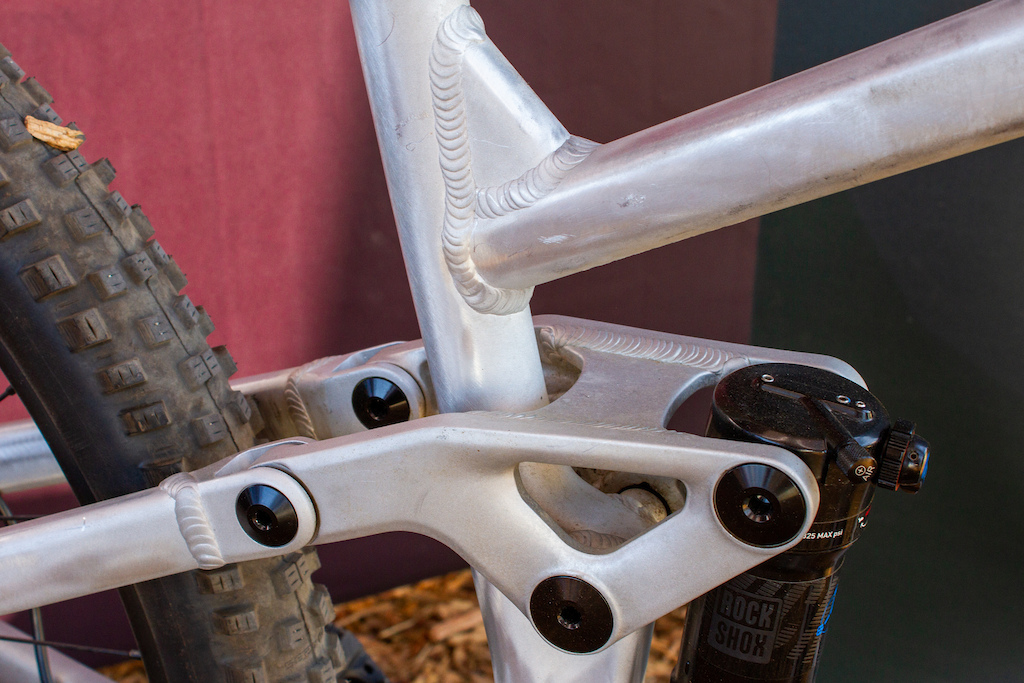 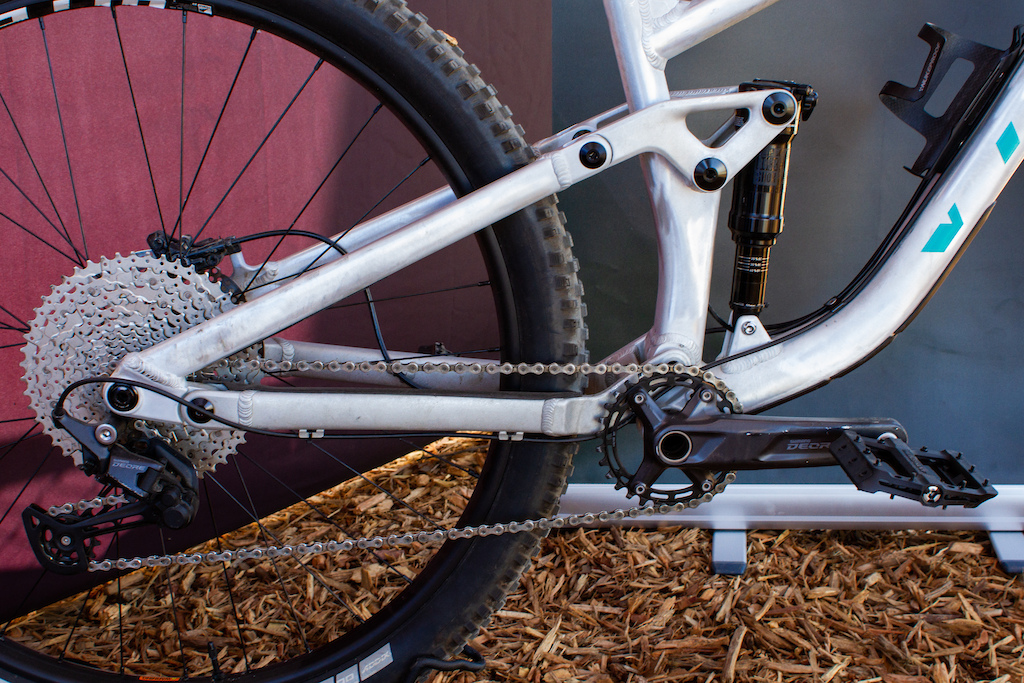 Details are still scarce, but despite supply chain disruption, Vitus expects to release the new bike this fall. Stay tuned for more information.

naptime (Apr 9, 2022 at 21:19)
@likeittacky: apart from the price range. Vitus make bikes that yeah, look like a lot of other bikes out there but, cost a LOT lot less. One of the best entry level companies out there IMO

NWintheUSA (Apr 9, 2022 at 22:17)
Vitus has true history in our bike culture (that said as a Titus owner).
Sean “King” Kelly rode them through the 80’s. No rider more bad ass than him road or mountain. @likeittacky:

adnauseam (Apr 10, 2022 at 14:46)
@DG370: As a bike technician I find this design very refreshing (and aesthetically pleasing!). This really allows anybody to change cables and housing and not just the seasoned pros.

danstonQ (Apr 13, 2022 at 5:44)
@diamondback1x9: Me too I thought it was a good fork (PB's reviews and more give it 5 stars) until I bought (a brand new) one and found out the hidden issues it has: this horrible back and forwards play, as if the bushings were dead.
Check out the forums: you'll see this default everywhere, and it's a huge disappointment for me and for hundreds of "trustful" purchasers.
Actually, this is a common default, and there's no use changing the bushing 'cos you can't change them: they are cast in the lower legs!!! So this is a shitty disposable fork, and the only solution Fox proposes is to replace the lower legs for Fox 34's, nothing less, and they ask 200€ for that.
So yeah: Marzoshit

Thirty3 (Apr 9, 2022 at 16:02)
Not terribly interesting or unique but it's a nice looking bike and I hope it stays raw all the way. What would make it even better is if it will priced very reasonably. That would make it some nice tits.

...but also options for color anno. That thing in forest green anno would be spectacular.

melonhead1145 (Apr 9, 2022 at 23:29)
Vitus hage really good pricing, this looks like it will replace the Mythique which is their cheapest FS bike

melonhead1145 (Apr 11, 2022 at 2:03)
@benpinnick: I'm not expert but you used to be able to buy V10s anodised, sure plenty of other bikes have been available anodised as well. supposedly you saved a bit of weight of not having the frame painted, and it looked pretty cool.

lepigpen (Apr 9, 2022 at 19:10)
Weird article, this is going to be the ultimate successor to the Mythique clearly. Full aluminum and priced just under the Escarpe. But they needed to get rid of the dumb ass seat tube that couldn't fit a dropper. Surprised they're not sorting out internal cables as well but that's fine with me, I think their solution isn't very elegant but at those prices I'm not really complaining. The 2022 price bumps have been brutal from the CRC warehouse, but Vitus deserves all the credit in the world for keeping a full range of 27.5 and 29 bikes, regardless of prices and design nitpicks. Now if only I could somehow influence them to ditch X-Fusion and just use basic Rockshox on the low end bikes.

heatedcheese (Apr 10, 2022 at 10:39)
Honestly put a Fox 36 performance on this, some DT Swiss wheels, and full Deore group and 99% of the people on this site will have all the bike they’d ever need. It’s good to have fancy options but when it comes time to spend my hard earned money I keep coming back to bikes like this.

justwan-naride (Apr 9, 2022 at 16:26)
Is this ever going to be in stock? Have they actually produced and sold any bikes from their current range? Other than that bike looks sweet, tried and true design. For the right price it should be a hit.

The Mythique came and went just a few days ago.

DylanH93 (Apr 12, 2022 at 16:01)
Looks awesome! I've got a vitus mythique in green and it's been such a sick bike. Climbs very well too. Been slowly upgrading it and I plan on sticking with it for a long time. Also have a friend who got the nucleus and they love theirs as well. Vitus really has some great deals for solid bikes.

samthirks (Apr 10, 2022 at 13:56)
Being salty because you missed the stock is different to the stock not existing

Curious to see how it’s reviewed, and the price point it actually hits.

hitarpotar (Apr 10, 2022 at 0:56)
It looks like an alu cheaper Escarpe with a lil less travel. Would make sense to keep the Escarpe carbon amd more race-friendly and then move the Sommet and Dominer to a highish-pivot design.

hamncheez (Apr 9, 2022 at 16:02)
That kinked top tube mold needs to die. They got so much freaking mileage from it, KHS had been using it since at least 2011. This bike looks miles better

wyorider (Apr 9, 2022 at 18:15)
Decent geometry, decent suspension design. If they get the details (and price) right this looks like a winner.

pink505 (Apr 9, 2022 at 19:12)
Prototype would imply innovation and tinkering not a free sample frame your taipey bike show manufacturer of choice provided to you. Nothing wrong with that and I am all for cheap trickle down copies of last years bikes of the year.

Brodybro29 (Apr 10, 2022 at 10:37)
@pakleni:
Vitus prices went up even in Switzerland after the brexit. I was close to get one Escarpe but the price bump was not negligible…

incognito29 (May 9, 2022 at 8:40)
Finally, an updated Mythique. That Escarpe is amazing on paper but the spec of money on the Mythique is unreal.

tatankawings (Apr 9, 2022 at 15:58)
Absolutely incredible, I've never seen a bike design like this in my life. I wonder if other companies will soon follow suit.

bansaiman (Apr 9, 2022 at 22:55)
A cheaper and more aggressive Version of the escarpe?yeah,thanks