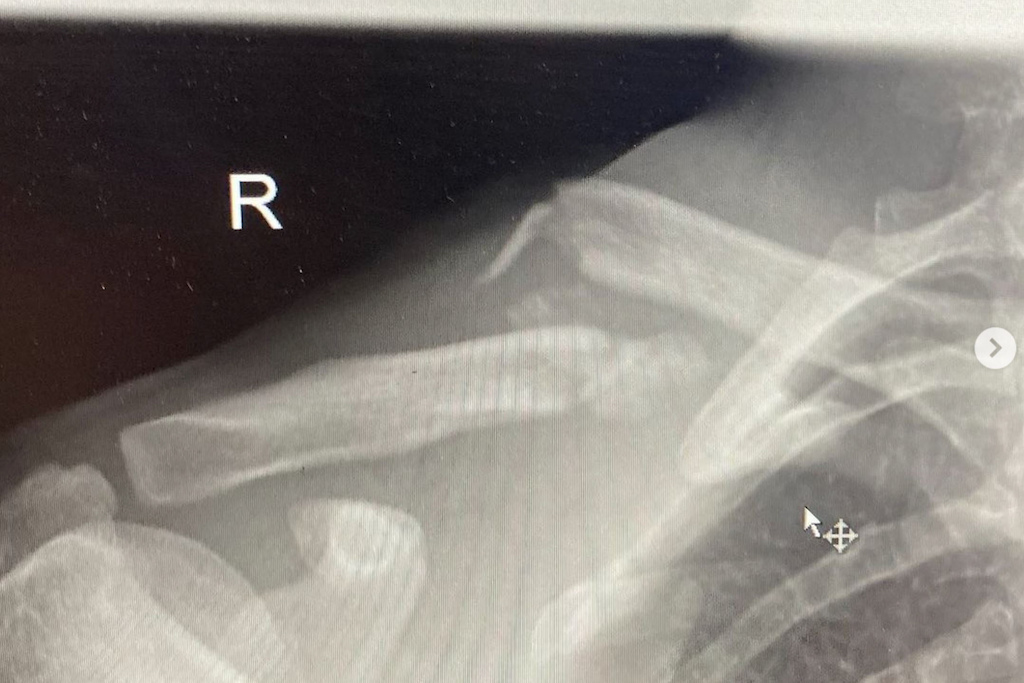 Joe Breeden announced on Instagram today that he will miss the third DH World Cup in Maribor this weekend because of a broken collarbone he sustained at the British National DH Championships just over three weeks ago.

His post included x-ray photos showing a displaced break and a repair with a plate and six screws. 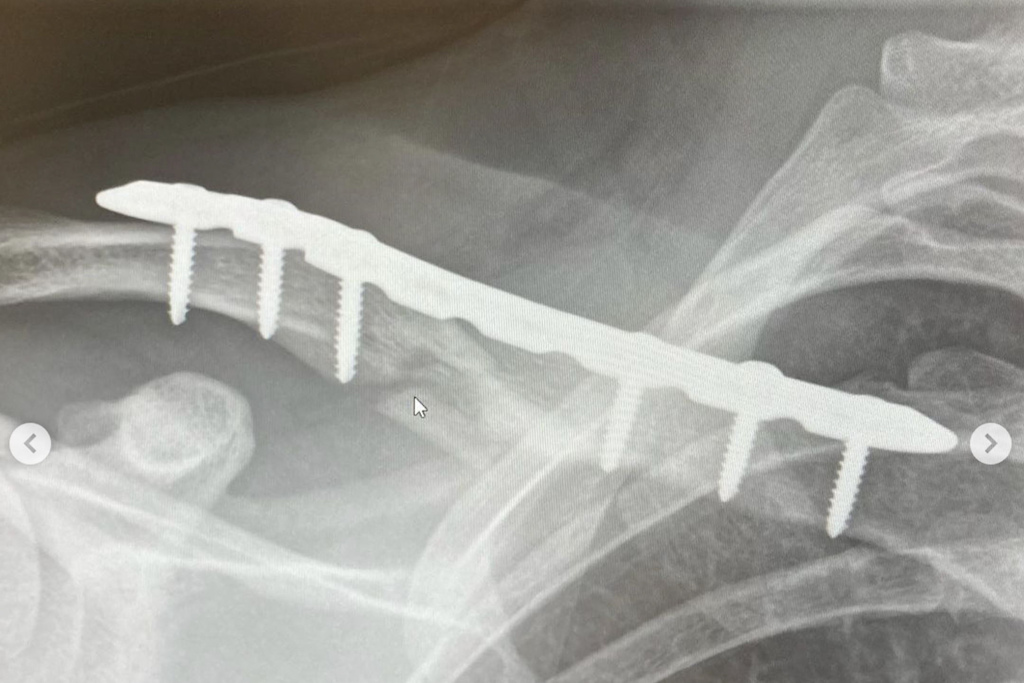 Joe seemed to be on a tear before he crashed. He seeded second in British Nationals and was just a tenth of a second back at the split, but pushed it too far, crashed, and couldn't finish the race. He went into surgery four days later on July 23. 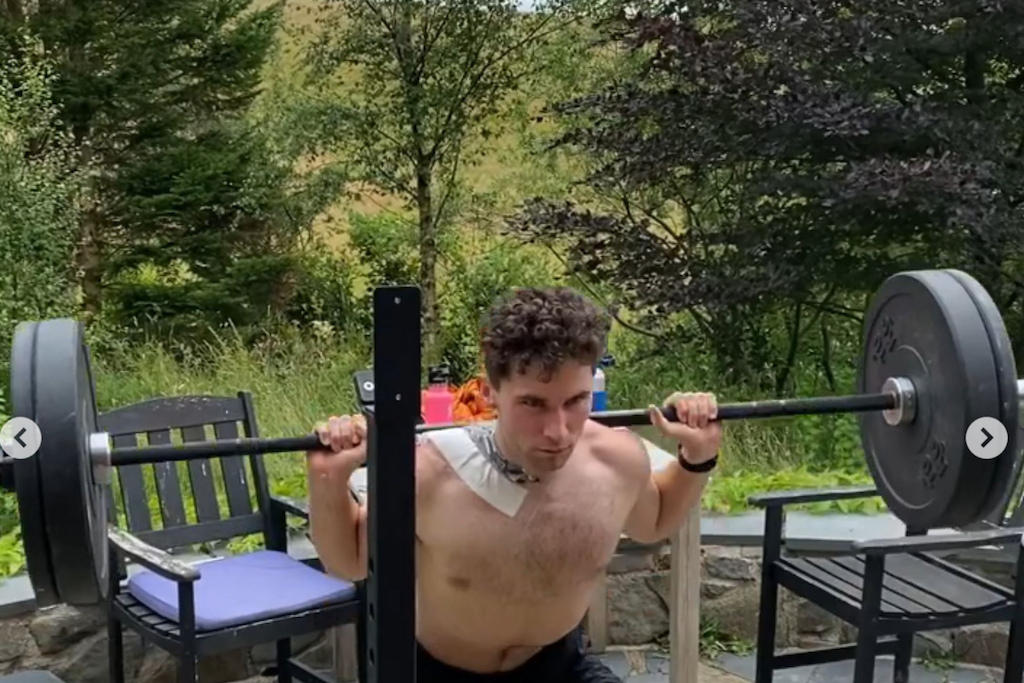 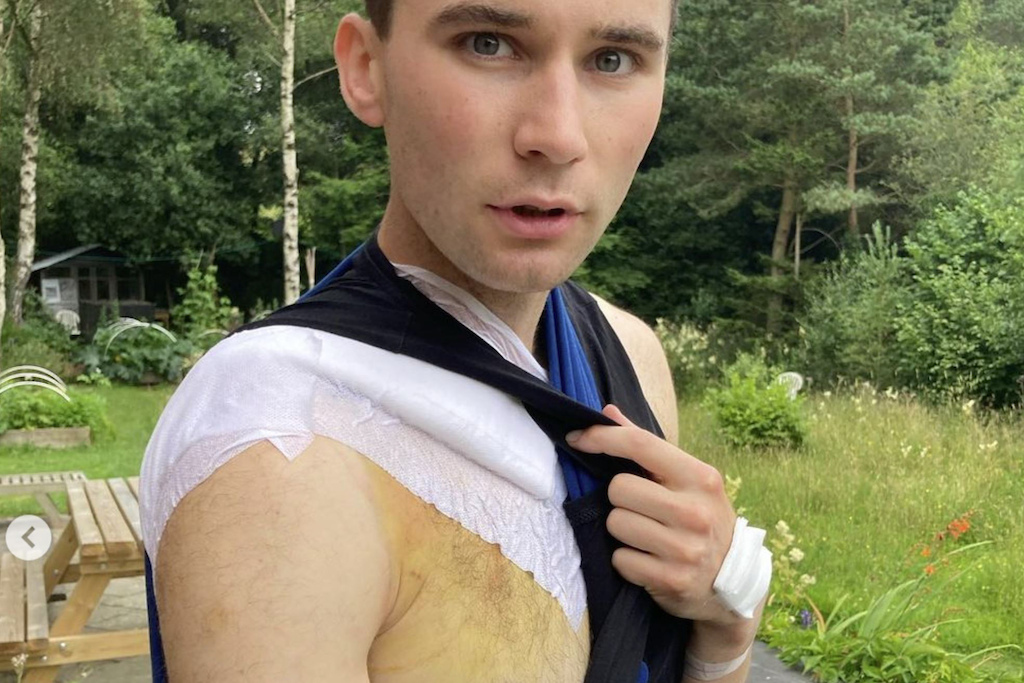 Recovery seems to be going well, but he'll be missed this weekend on the race track at Maribor.
He appears to be healing quite well and is already back to training, so we expect to see a full recovery before too long.

We wish Joe all the best and hope to see him back on his bike soon.

jayacheess (Aug 11, 2021 at 12:25)
Having had two broken collar bones repaired with surgery, I know it feels damn near normal after only a short time. But the doctor was really clear that upper body stuff shouldn't be started for a while as it puts stress on the bone and can delay full healing.

AlexArtz1 (Aug 11, 2021 at 12:47)
Im literally one week out from surgery on a broken collarbone, and the fact that he is already lifting weights practically sitting on that bone seems like a very bad idea.

AccidentalDishing (Aug 11, 2021 at 12:52)
@AlexArtz1:
Front loaded squats seem like a better idea, but it's still supported through your shoulders I guess. Leg press? It's just riding bikes lad!

Bstat918 (Aug 11, 2021 at 15:49) (Below Threshold)
I’ve broken both of mine and got them plated. Was on the bike at 4 weeks both times and they both healed properly. The mtb community is just soft and needs to take notes from Moto guys.

So yeah, you can probably get away with it, but it's not a good idea for longevity. And if anything goes wrong, you're in deep shit.

Bstat918 (Aug 11, 2021 at 16:17)
@jayacheess: Well yeah not crashing is top priority, but other than that you can get away with riding on it early and it won’t mess it up. It’s all about riding smooth and smart after an injury.

RonniePivot (Aug 11, 2021 at 14:12)
6 weeks out from a distal break in my clavicle, 4 pieces and a couple broken ribs just for kicks. Doc put in a J-hook which will have to come out in another 6 weeks or so. The J-hook limits my range of motion so it really hurts to put my arm over my head. Been biking since 1985 with only 5 years off (when son was born) and this is my first clavicle break, no fun sleeping on only one side! Hope he gets well, and I do too!

pisgahgnar (Aug 11, 2021 at 18:53)
The distal break is a tough one. I had the same in March with a grade 3 shoulder separation. It was 6 weeks minimum before I could even get my arm above my shoulder but now I'm back up to speed on the bike. No crashed yet though. The doc is also a biker and has warned me the distal break takes a while for the bone to heal due to low blood flow out at then end there, a hard crash could mean reinjury.

PubeySalad (Aug 12, 2021 at 8:34)
I displaced my right clavicle almost 12 weeks ago. Did a light ride last week and it's still iffy! Can barely string a few press-ups together. Still only sleeping on my left side. First bone I've actually damaged in all sport I've participated it and it's a real annoying one!

TOflat (Aug 11, 2021 at 19:14)
Pretty sure if his team had any sort of competent medical staff they'd tell him to hold off the weights. Problem is we saw Pidcock riding 6 days after surgery and now some athletes with a plate and screws are going to think they're good to go after just that long at least. The whole sport needs some sort of unified medical standard to follow like MLB or NBA. It's amateur hour in the world of MTB's.

notphaedrus (Aug 11, 2021 at 14:31)
Such a talented rider and it is truly difficult to make these kind of calls in an early career racing. It’s a hard sport, and it’s even harder on the body. Get strong for the next one Joe!

betsie (Aug 11, 2021 at 14:54)
2.5 weeks post surgery .. that's around when my plate screws pulled out slightly. Wouldn't risk pushing it too far. It healed fine though, even if with a wee bump and the plate looking a little funky.

Bkbroila (Aug 11, 2021 at 13:46)
@jayacheess: so says everybody who's gone under the knife but I've never even been given the option ...and my last break was savage! Oh well. 6 weeks later and I'm back to full speed

RadBartTaylor (Aug 11, 2021 at 14:04)
@Bkbroila: with big breaks like this, surgery is the most reasonable option....mine looked sim, I was technically given option, but highly suggested that I get surgery vs a shoulder with very limited range of motion and crooked the rest of my life. No way your are up and running after 6 weeks with a break like this....

mab411 (Aug 11, 2021 at 14:35)
After the experience of breaking mine, my mind is blown that it's so common to just let it heal by itself. I guess they aren't usually as crushed up as mine was (I learned the word "tenting" used in this context), but the thought of just letting the broken ends wiggle around in there makes me a little nauseous. Literally, I have to stop typing now.

Edit, after a few breaths: that coloring sure brings back memories.

boozed (Aug 11, 2021 at 16:27)
After I did mine I was advised there was a 20% chance it would never heal. I figured that meant that even if it did heal, it wouldn't do so properly. The decision to have surgery was put entirely on me, but it was the easiest decision I've ever made. I ended up having more complications from the removal of the plate than its installation...

iamamodel (Aug 12, 2021 at 0:06)
@Bkbroila: Lee from leelikesbikes didnt get surgery. Thought it was fine. Years later found his bone was in two pieces the entire time.

The comedian Hannah Gatsby had a single digit golf handicap until she was hit by a car and broke her clavicle. It never healed.

Bkbroila (Aug 12, 2021 at 11:20)
@RadBartTaylor: I seem to have had good luck with the recovery considering the circumstances... I slowly
and cautiously started riding moto and mtb after 6 weeks.

Bkbroila (Aug 12, 2021 at 11:24)
@mab411: Yeah, my last break was a gooder. Broke the clavicle in two spots mid shaft. The piece that broke now lies slightly diagonal to the bone and the skin has tenting on either side of the broken piece. All and all it was a bad break that should have been plated.

Bkbroila (Aug 12, 2021 at 11:27)
@iamamodel: Yeah, I pushed to have mine pinned to no avail. The ER doctor, my family doctor and the orthopedic surgeon all said it will heal fine... And I mean, they're kind of correct as I am back at it but there's definite "tenting." Not aesthetically nice to look at it that's for sure.

AlexArtz1 (Aug 12, 2021 at 7:39)
Its a very common mountain biking injury, combine forward momentum and landing on your shoulder its usually the give point. Its also probably the preferred injury out of separated shoulder, rotator cuff, ac joint, etc.