Pinkbike Primer: Everything You Need to Know Before EWS Crans-Montana 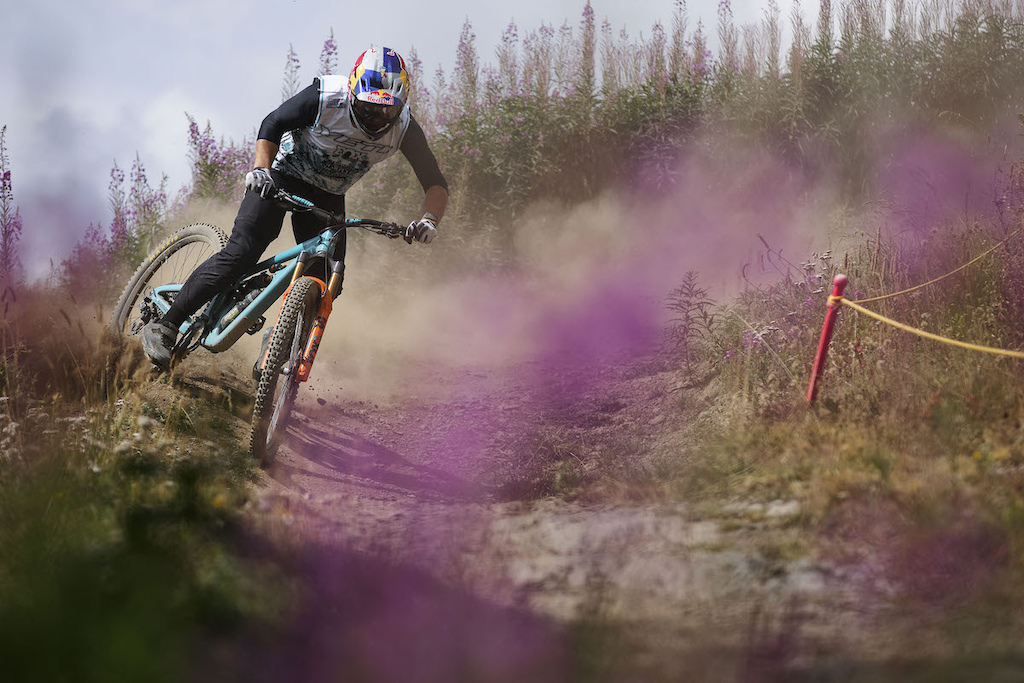 The EWS is now at yet another brand new venue, less than one week after racing finished up at the Loudenvielle double-header. Now, riders have crossed the border to Crans-Montana, where they'll race on high alpine slopes of Switzerland's Valais region.

Also this week, we saw the beginning of the EWS-E series, which took riders on three long loops totaling nine stages and more than 60 km of racing. In the men's race, Nico Vouilloz dominated over his teammates Kevin Marry and Antoine Rogge for a Lapierre Overvolt Team sweep of a very French podium. In the women's field, Laura Charles and Tracy Moseley swapped leads all day until the French up-and-comer eventually came out on top.

This week's EWS race will be the first EWS stop that's not a double-header after six rounds in three different Italian and French locations. At all the previous rounds, we've seen an intense battle between Richie Rude and Jack Moir, both riders taking turns leading and even giving us the closest race in EWS history. Moir currently sits just 140 points ahead of Rude in the overall. We've also seen some exciting racing in the women's field, with Hattie Harnden taking her first two EWS wins, Melanie Pugin once again having an incredibly strong season and leading the overall, Morgane Charre and Noga Korem nipping at their heels as two riders who could take the win at any race, and Isabeau Courdurier taking two wins despite having a tough season.

Let's take a look at what to expect from the racing this weekend.

The Venue
Crans-Montana was the setting for Emilie Siegenthaler's and Morgane Charre's video 'Devotion' that came out earlier this year.
The Crans-Montana trails start up at about 2,254m / 7,395 ft, then drop down through the Crans-Montana bike park and surrounding trails. The race is laid out around a few small villages in the Crans-Montana municipality, and four out of five stages take place within the bike park.

While the EWS has never visited Crans-Montana before, several big races have taken place at the bike park, including an iXS Swiss Downhill Cup race back in 2005. The region is also slated to host the 2025 UCI Mountain Bike World Championships, with the cross country races taking place at Crans-Montana and the other races happening at seven other venues in the area.

The Format
Unlike all the other EWS races so far this season, the Crans-Montana EWS race is a standalone event, though of course the EWS-E, EWS100, and EWS80 will also take place this week. Like the other stops, the race will have a single pro stage the first day before a full-day event the second day that will include a repeat of the pro stage.

Salade Vert appears to be a fresh-cut, unmapped trail that overlaps with the end of Stage 4. The stage starts at the bottom of one of the bike park's most heavily trafficked trails, Mt. Lachaux (or simply Red Track) and drops off to the left into the trees, below the bottom of the bike park.

Kaltstart takes riders from the top of the lift through the upper section of Chetseron, the bike park's so-called Black Track, a two-kilometer less ridden section of trail, before turning onto an unnamed, raw section that skirts around the edges of the woods. The stage ends at a two-track road that parallels Stage 2, which riders will climb to access Stage 2.

Stage 2 begins on Chetseron where Stage 1 left off, down a track that was used for an iXS Swiss Downhill Cup race back in 2005 but has seen some trail updates since then. After the downhill track, the stage finishes on a short series of easy trails and roads down to town.

After a rolling, fairly short transfer, riders will arrive at Stage 3, the Queen Stage, which will earn the winners extra points (and bragging rights). The upper section of Shapers Secret seems to have been illegally built but is apparently fair game now, which probably means it's a great trail. The lower section also looks rowdy and may be another fresh-cut section for this race.

After Stage 3, riders will pedal their longest transfer of the race from the bottom of Stage 3 back up to the bike park. As a final reprieve, they'll take the lift up to the longest stage of the race, Mt. Lachaux / Red Track. The bottom of Mt. Lachaux will drop them into a repeat of the Pro Stage, finishing down in town. 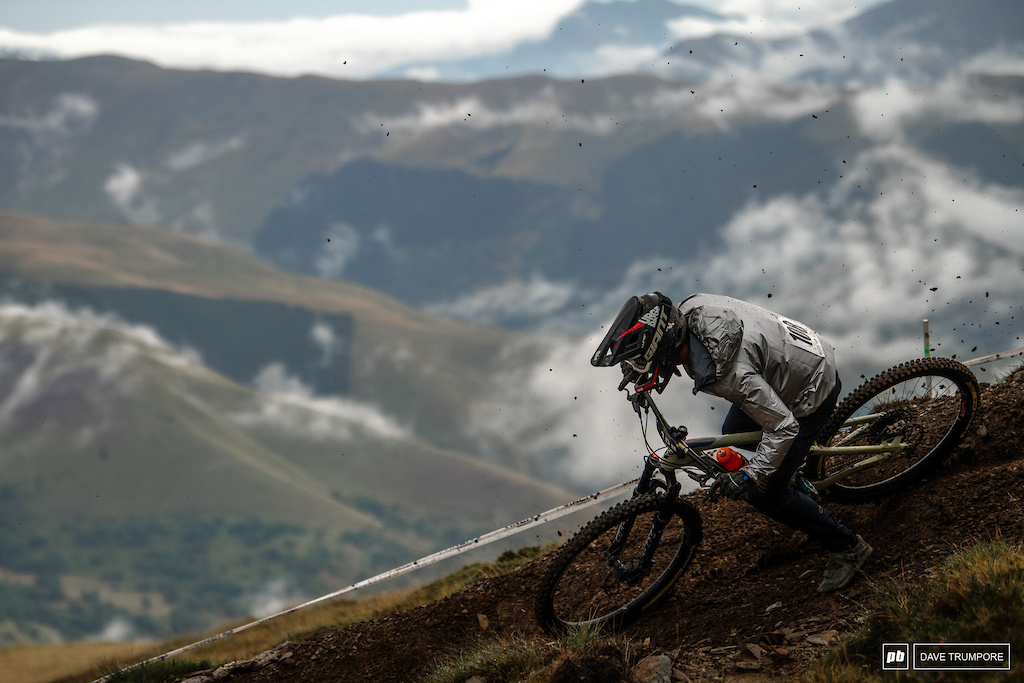 Wet weather made for tough racing last week.
Once again, there's a chance of rain in the forecast, but it looks less torrential than last week's weather at Loudenvielle, which caused course changes and some brutal crashes. As of right now, it looks like the afternoons will bring some thundershowers, so here's to hoping the lift can run.

Friday, September 10 - Practice
Mostly cloudy with a couple of showers and a thunderstorm // 13°C // 62% probability of precipitation // wind 7km/h

Weather forecast as of Thursday, September 9 from Accuweather.

What Happened Last Round?
The last two rounds were more back and forth battles between Richie Rude and Jack Moir, with Moir coming out ahead at the end of each race. On the women's side, Hattie Harnden took her second consecutive EWS victory, backing up her first win in La Thuile at the previous round. The next race, Isabeau Courdurier came up from fourth place to take the win in an extremely tight race, with the top six women within 30 seconds. 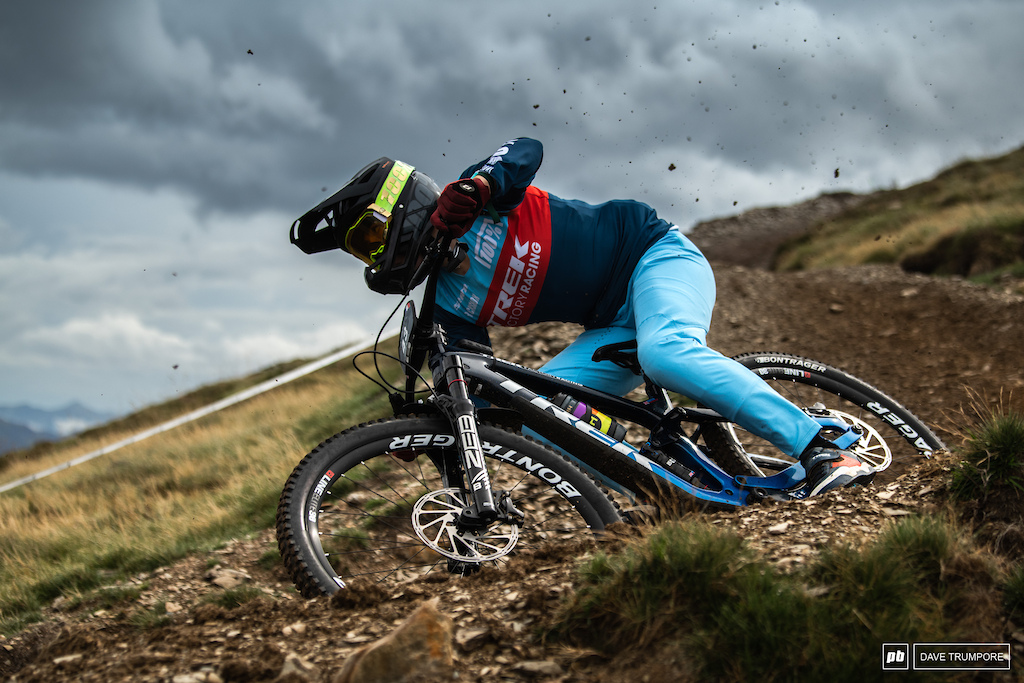 Hattie Harnden is on a tear. Can she take another win?
It's splitting hairs to try to guess whether Richie Rude or Jack Moir will be faster, though Moir has come out on top more times than Rude has this season. I'm picking Moir for the win again, but fully expect Rude to put up a fight and take his fair share of stage wins, too. Third on the podium, Jesse Melamed has been having a fantastic season. Loudenvielle wasn't a great stop for Melamed, as he had a mechnical in the second race, but he'll likely come back swinging.

Hattie Harnden has been on fire lately, and with two wins at the last three races, it would be hard to bet against her. She seems to learn something and progress even more each race. Next up, it would be great to see Isabeau Courdurier stay at the top. She's having a tough season and has said she doesn't feel quite in her groove, but has more than shown us that she's not to be ruled out. Rounding out the podium, I'll pick Melanie Pugin. Pugin has not been outside of the top three once this season, which is incredible. She's clearly the most consistently fast rider in the women's field right now. 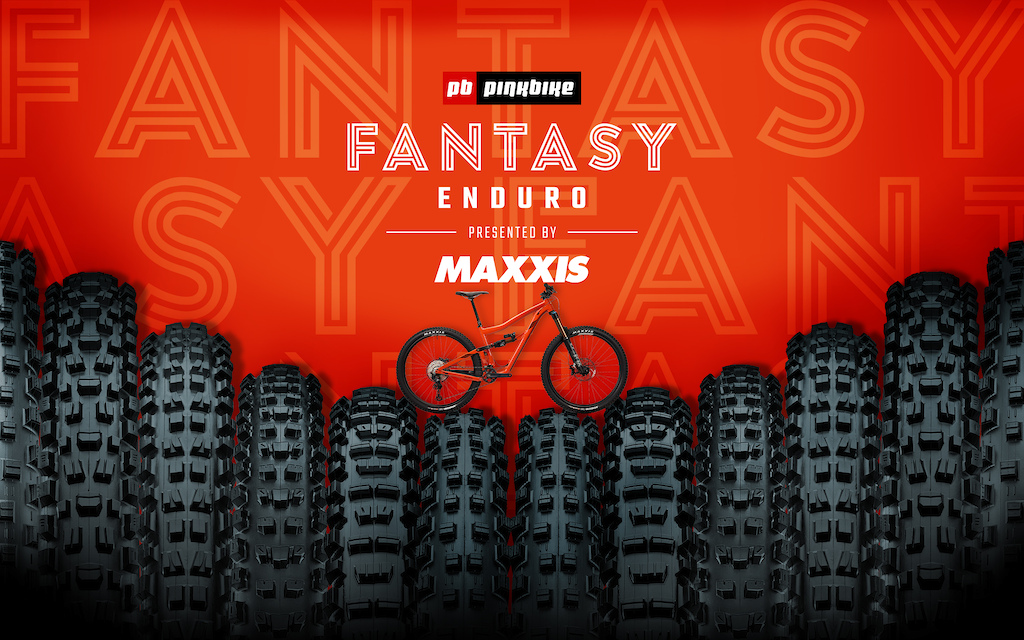 notsofastoverfifty (Sep 9, 2021 at 23:19)
I thought 'Crans-Montana' was a play of names of events like Trans-Savoie or Trans-BC, etc. But no, Crans-Montana is the name of the place where the event is. And it's in Switzerland, not the state of Montana in the USA! How very confusing!! ;-)

lowgear (Sep 10, 2021 at 1:53)
Crans-Montana is a common venue on the FIS Alpine skiing world cup too, but I guess not every cyclist follows that. Have ridden there once and it is stunning. Entire region of Valais is full of beautiful mountains with world class trails.

sjma (Sep 10, 2021 at 5:42)
I’m from New England I thought Crans-Montana was an enormous cross-country race from Montana to the south shore of Massachusetts (land of many cranberry bogs) the first time I saw it. Switzerland is slightly different.

NoahColorado (Sep 10, 2021 at 8:28)
Next time I go to a bar I'm gonna order a "Cranberry Montana" and see what comes out. Maybe Ocean Spray and moonshine?

toad321 (Sep 10, 2021 at 9:36)
I've been and it's amazing, there is a brilliant campsite you can easily walk/ride into town from. Lovely little town and they seemed to be investing into more summer sports. Get a big credit card if you are visiting though XD

SCALI69 (Sep 10, 2021 at 5:02)
Hi everyone. Seems like World Enduro Series would like to transform Enduro in Downhill. Looking at the biggest gaps they add on the last Enduro race, shortest tracks and shortest travels to climb to the tracks or with uplfits, our favorite MTB discipline seems to radicalize. Do you agree?

Jaib06 (Sep 10, 2021 at 5:31)
Yep, it sucks. It's cool to have a mix of both. Long transfers and physically demanding stages, as well as short, techy stages with uplifts or short climbs. Might be nice to also include a climbing stage every now and then.

CustardCountry (Sep 10, 2021 at 5:00)
I’d still love for EWS races to have either really short/tight times on the transfer stages between each stage of the race and/or some kind of scored hill climb in the middle as one of the stages. So that the emphasis over the weekend is mainly DH but they still need to pedal bikes that are capable of going up effectively as well as smashing out the downs.

nrpuk (Sep 10, 2021 at 6:39)
@CustardCountry I wouldn’t like that. The current format gives us the best gravity riders on top. I think what you’re proposing would introduce too much fitness, changing the results completely. Super DH stages like what they had in Chile was cool, but no overkill on the XC elements please. Just time an entire loop, and call it Enduro XC if you want to, I am sure people would love that too!

stevemokan (Sep 10, 2021 at 6:59)
Take out the lift-assisted liasons, or limit them so there's more pedaling on the transitions. Having to climb 5000' or more while pushing yourself to the limit on the downhills is damn impressive already.

salespunk (Sep 10, 2021 at 8:00)
All of these riders are incredibly fit. Adding a climbing stage would put too much emphasis on that particular stage, plus there are usually some nasty climbs in the middle of the race stages that test everyone's legs and lungs. BTW what you are describing is the old SuperD format.

salespunk (Sep 11, 2021 at 15:29)
Search for the raw video of today's Pro Stage. There is another painful climb in the middle. This is way worse than a dedicated climbing stage because the riders have to maintain the physical and mental acuity to ride the rest of the stage which is the most technically demanding portion from what it looks like.

jclnv (Sep 9, 2021 at 20:08)
Moir is on a different level. Check his YT on-boards. He’s riding so clean and precise. Everyone is flatting etc trying to keep up.

traildad69 (Sep 10, 2021 at 8:07)
Definitely steep enough to be although if the metric system was implemented in Montana the entire region would fall into total chaos.

Hayek (Sep 10, 2021 at 16:09)
@daugherd: truly wild to me that there is so little racing in the states. Especially with the first 3 rounds of 2022 being cancelled already, how about bringing those three rounds to the states? Between the NE and NW, Utah, Wyoming, Colorado, Montana, or Idaho you could have some really great rounds here.

qualms23 (Sep 10, 2021 at 8:59)
I recently went riding in crans montana and i honestly couldnt find any decent enduro trails, the closest i got was riding hiking paths, which were absolutly bustling with hikers