Round Up: 30+ Fabrication Tutorials from Frame Building Legend Paul Brodie 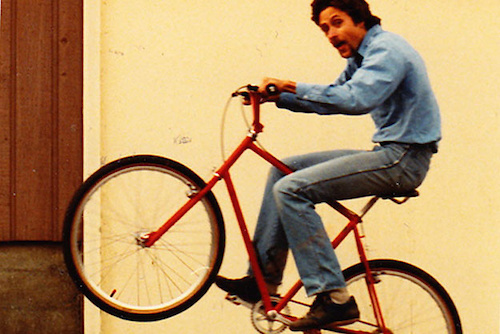 Paul Brodie has forgotten more than many of us will ever learn about bicycles.

The MTB Hall of Famer made his first bike when he was 12, a mini bike that he designed and built with some help from his father. Many years later, he fell in love with a Ritchey Team Comp and decided to create his own version using tubes from a frame he found in a dumpster.

That early frame helped him become Rocky Mountain's first mountain bike frame builder, and after two years with Rocky, he split off on his own to start Brodie Bicycles. He is credited with creating the sloping top tube design that is now standard on mountain bikes, and he has won two NAHBS awards for a 1988 Whippet replica in 2012 and a city bike in 2015.

Brodie now teaches Framebuilding 101 at the University of the Fraser Valley in British Columbia, Canada. When COVID shut down his in-person classes, he needed a pandemic project. While many people in quarantine started baking bread, raising puppies, or — according to my social media feeds — having children, Paul Brodie started a YouTube channel where he posts video tutorials on frame building and other fabrication projects.


It's not all bikes, either. Here's an extra.

whydomylegshurt (Apr 24, 2021 at 21:07)
Your "Milling Time" shirt is my new favorite piece of clothing! Thanks for sharing this much knowledge.

suravida (Apr 25, 2021 at 6:09)
Thank you for your sharing. After filing my fillets by hand so far I just bought a bunch of spiral rolls and a die grinder. I might even have some time left to ride my bikes again!

forrestinthetrees (Apr 26, 2021 at 20:04)
gotta be the coolest thing to grace Pinkbike in years. So grateful to know about this! Thank you for sharing your skills and passion, Paul. Keep that rubber side down!

MB3 (Apr 24, 2021 at 10:05)
Living in Victoria BC back in the nineties, Brodies were THE bikes we all wanted. Beautiful steel frames, decked out in Syncros components... seeing one now is like looking at a nice ‘60s Mustang or other collector’s car. Vintage excellence.

warmerdamj (Apr 24, 2021 at 10:37)
Brodie Holeshot was my dream bike. I used to go drool over it in Life Cycles in Abbotsford. Never was able to afford one though

yale986 (Apr 24, 2021 at 11:03)
Totally agree! Brodie and Dekerf were the most drool worthy frames back then. Also loved the Cove Hummer and Kona Hei Hei but those were Ti legends.

MB3 (Apr 24, 2021 at 12:20)
@yale986: Dekerf was also a great bike. They had these beautiful green paintjobs at the time that just shimmered in the sun. I believe Andreas Hestler used to ride for them back then.

Off Road Toad was another BC steel boutique bike brand that I admired.

All those bikes were strong, light, and gorgeous. There was a certain amount of prestige that owning and riding one had. I mean, it was cool to have a high end Kona, Norco, or Rocky Mountain back then too, but Brodies, Dekerfs and Toads were pretty special.

mookmeister (Apr 24, 2021 at 12:37)
@yale986: I still have Brodie Sovereign, Dekerf Team SL and Hummer frames. I had Chris Dekerf braze on a disc brake mount on the Hummer. Sovereign has been turned into a commuter bike. I get attached to bikes. Yes, it's a problem.

MB3 (Apr 25, 2021 at 20:56)
@PNdubRider: I bought a ti RekTek bottom bracket back when I was still a starving student, and installed it on my steel Bridgestone MB3 (my first “real” mountain bike). As it was my first titanium component ever, I was really stoked about it... even if was in a place no one ever saw. It was kind of like having Gucci silk boxer briefs... hidden luxury.

yale986 (Apr 25, 2021 at 22:56)
@MB3: Wow forgot about those! Absolute stunners. While not a Canadian brand, Slingshot bikes for some reason always come to mind when I think of those halcyon days. I remember walking into Bikes on Broadway every week or so to ogle the Dekerf frames which were waaay out of my budget back then.

BMDN (Apr 24, 2021 at 13:40)
Currently looking at two Brodies sitting in my basement from 20 years ago: A Bruzza and a Thumper. The Bruzza is still being ridden regularly!

bikesalot (Apr 24, 2021 at 23:35)
This is amazeballs!!! Thanks for this! It’s always been a dream of mine to take Paul Brodie’s 2 week framebuilders course at Fraser Valley University but this seems like the next best thing. Will definitely be watching all of these over the coming weeks. The man is an absolute legend.

bluepen (Apr 25, 2021 at 13:52)
I took his course 5 years ago and it was absolutely amazing. Paul is a master and a legend. Going in to it you think it will be a lot of instructional and course work but 2 hours later you have a torch and some tubes in your hand. I had never welded in my life but I am very mechanical and do a lot of wood working so the tools were all familiar. I built a gravel frame and it now has thousands of miles on it. Every time I ride it I marvel at the fact that I built it.
One of the best moments is when I was ready to add my rear disc mount so I ask Paul "what do we do for disc brake mounts" and he hands me a 5" square of steel, a hack saw and a file.
Honestly it was so rewarding - anyone interested should absolutely take his course.

galliwasp (Apr 24, 2021 at 11:10)
Back in the 20th century, I had a Brodie Expresso, and I believe it was one of the last years Brodie himself fabricated them. There is a certain something about a steel hardtail that's nice.

zoobab2 (Apr 24, 2021 at 11:14)
Bought the tubes and torch, I am missing the gas to do weld my own frame. I am afraid of storing gas bottles in the basement, as it could potentially blew up the whole building. Maybe TIG is safer, and not that difficult after some training? What should I buy as a TIG welder?

enki (Apr 24, 2021 at 11:34)
I followed the same path, and thinking, but now I have bottles in the garage, _AND_ a TIG machine.
You can't go wrong with a decent Miller (although the ultra low end diversion lacks AC balance and pulse, so might be a bit limited if you ever want to try aluminum, even though it has AC).

I ended up buying an Everlast, which is a rebadged chinese machine, but it's been great, and reliability is probably fine for the amount that I use it. No problems so far.

Now, all that said, you're still gonna want acetylene+oxygen bottles if you want to do braze-ons. You might be able to get away with MAPP though, or even oxy-propane, which don't have the same risks as acetylene. I keep my bottles chained to an upright in my garage so that they won't fall over, even if we have an earthquake.

Lee-Gee (Apr 24, 2021 at 12:18)
Be careful welding in your basement, Argon can build up and you may accidentally asphixiate yourself. You will need a means of venting the argon.

Thanks Paul fantastic to watch your builds, still have an 853 Norco I added a rear disc to its now a pump track/city bike, and its going to out last me.

entrecerros (Apr 25, 2021 at 6:33)
@landscapeben: His motorcycles are way more interesting than a Porsche. He even builds his own Excelsiors -each piece made by hand-, simply amazing

PB-J (Apr 25, 2021 at 4:15)
These are absolute gold, no question. I could have got that dent out a little easier though with a single sided spot weld wire and slide hammer we use on cars, would have only required one heat cycle and a lot less brazing.

WILDWOODCYCLES (Apr 25, 2021 at 8:41)
You forgot to mention Paul is one of the nicest and most humble humans around

davechopoptions (Apr 25, 2021 at 2:10)
Those brakes are lovely. Having watched the video, and scrolled down through the others, I wasn’t surprised to see the pipe video!