Growing up in the North of England, I had a plentiful supply of rocky outcrops to hone my trials skills in preparation for competitive trials. People would travel from all over the country to come and ride our lovely weather-worn millstone grit, even if that weather did bring truth to the statement ‘grim up north’.

As much as I enjoyed riding my local hillsides, I was always enticed by the towns and cities further South; Wales was made appealing to me by my idols Martyn Ashton and Martin Hawyes. And across the Severn Bridge and towards Bristol was the home of Rowen Jones, still, one of the smoothest riders ever to grace a trials bike to this day. While many riders have made their own marks (quite literally in some cases) in both Cardiff and Bristol, I still have the same level of excitement and intrigue when I make the journey down; a journey which is considerably longer now I’ve made my home in Scotland.

This Summer I picked up a brand new T68 motorhome from my sponsors Sunlight and made plans with my long-time friend, riding buddy and photographer Mark Westlake, to visit him and his wife in Cardiff and make a long-overdue edit. 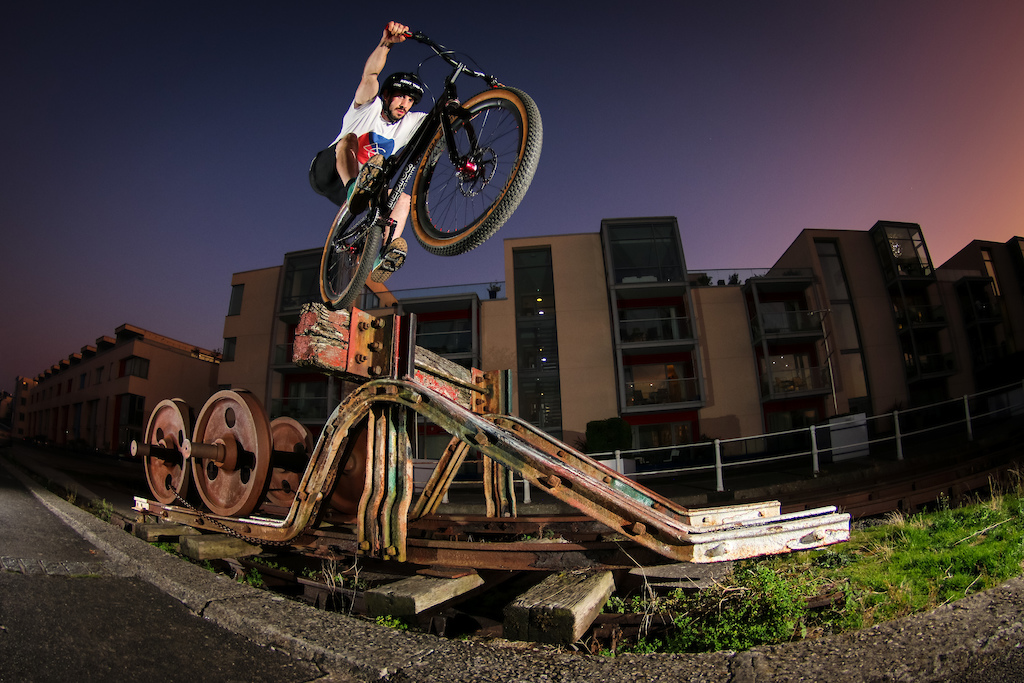 I could spend hours riding this!

I’d planned to meet Mark at Red Bull Hardline in North Wales and spend the next few days exploring Cardiff and Bristol. I’ve been to both cities before (my last full edit was made in Cardiff with Mark a few years ago), so I knew what was available to ride. I had a couple of ideas in my head of lines I had wanted to try, but with more riders producing videos here it was hard to find new ways to ride pre-ridden locations.

Due to my history of riding weird-shaped rocks, I am very much a location/object style Trials rider; an old school rider, if you will. Despite living with Danny MacAskill, perhaps the best-known Trials rider on the planet with a trick list as long as his arm, I’ve never gotten the hang of being able to do a million different combos on a single wall. My skill is being able to get my bike into cool places with minimal exertion. In a world of triple foot jam whips and hop whips, I always feel that the smoother old school style stands out as being unique. 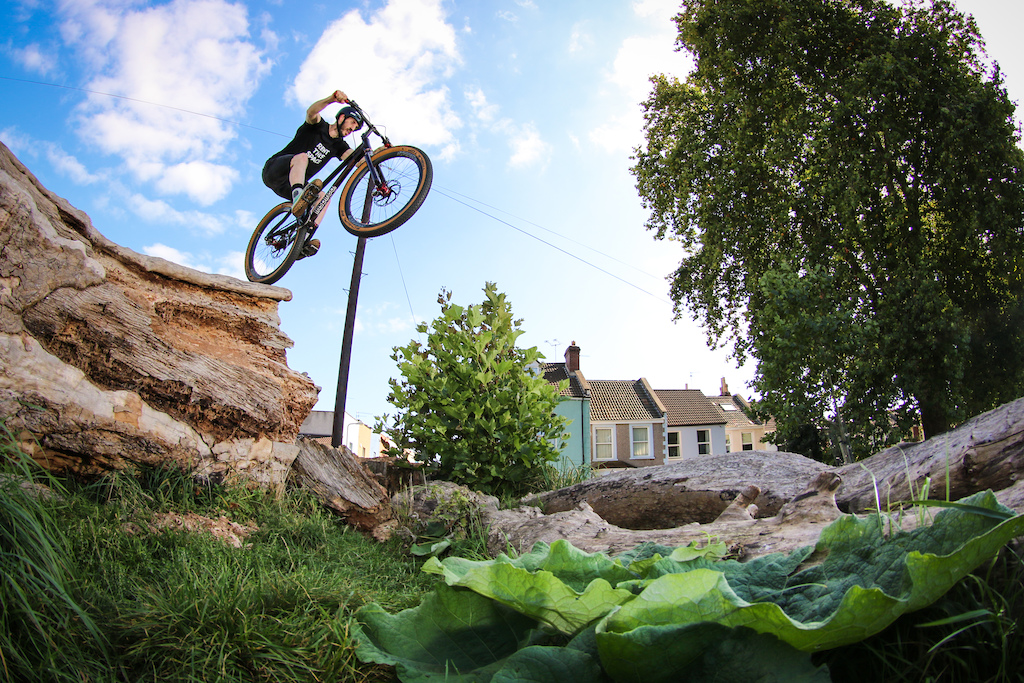 It's not always about walls and rails, fallen trees make ideal playthings too!

I’ve been filming and uploading weekly videos to my YouTube channel for over three and a half years now. Maintaining the weekly filming and editing workload means that sometimes I have to sacrifice my riding and accept extra hops or a wobble here and there. Filming an edit allows me to be picky: I can take the extra time to polish the riding up and add in little things that really make a difference, despite often testing the patience of myself and the filmer. The downside to this perfectionist approach is that sometimes seemingly simple lines can end up taking hundreds of attempts, hence the testing of patience.

Filming with Mark is always a pleasure as he is incredibly patient. We’ve known each other for years and he knows my riding better than I do a lot of the time. When filming at the final clip location, I hadn’t seen anything of interest. But a unique rail and wall set-up caught Mark’s eye; hopping to front-wheel over both the rail and the wall was something I’ve never seen done before. After many attempts, the ender was in the bag and Bristol had a new line found and pulled. Every city is one big puzzle waiting to be solved and is one of the many reasons why I love trials. 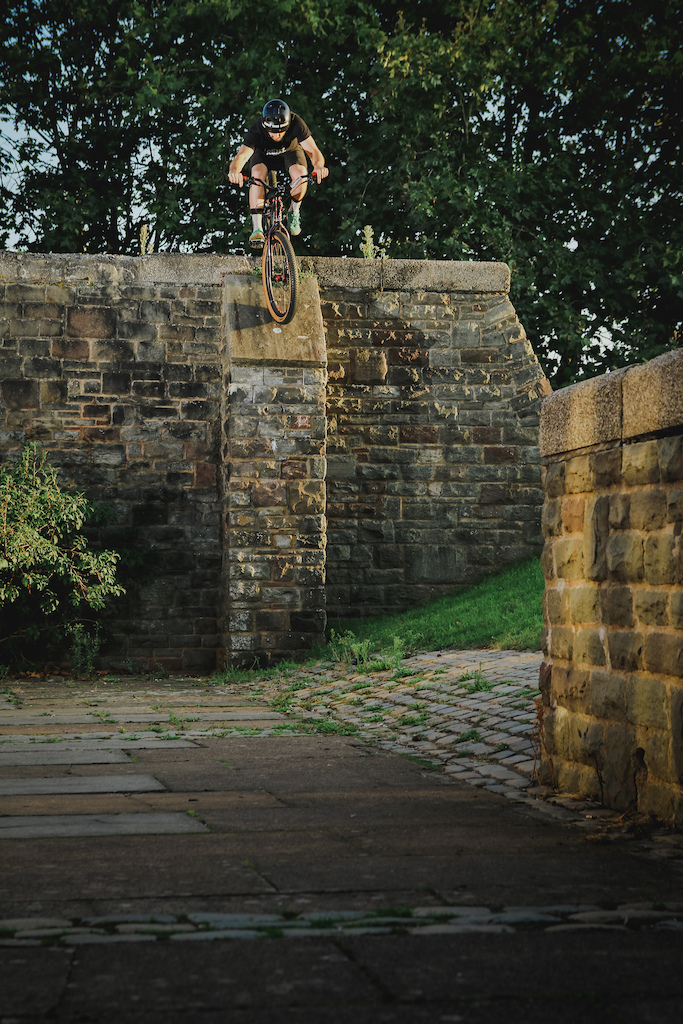 Past the point of no return!

As filming continued, Mark and I realised that an extension to the initial timeline was in order; the weather was good for the rest of the week and with a little more time we could turn a short two-minute clip into a full-sized edit. Additionally with my correction hop ‘rules’ set in place, getting each clip was taking up precious minutes. I stayed on for a couple of extra days and it was definitely worth it. I’m happy with the video and what it lacks in big moves I think it makes up for in flow and smoothness.

The UK might not be the biggest country but it does offer a lot of good riding, I wonder where we’ll go next? 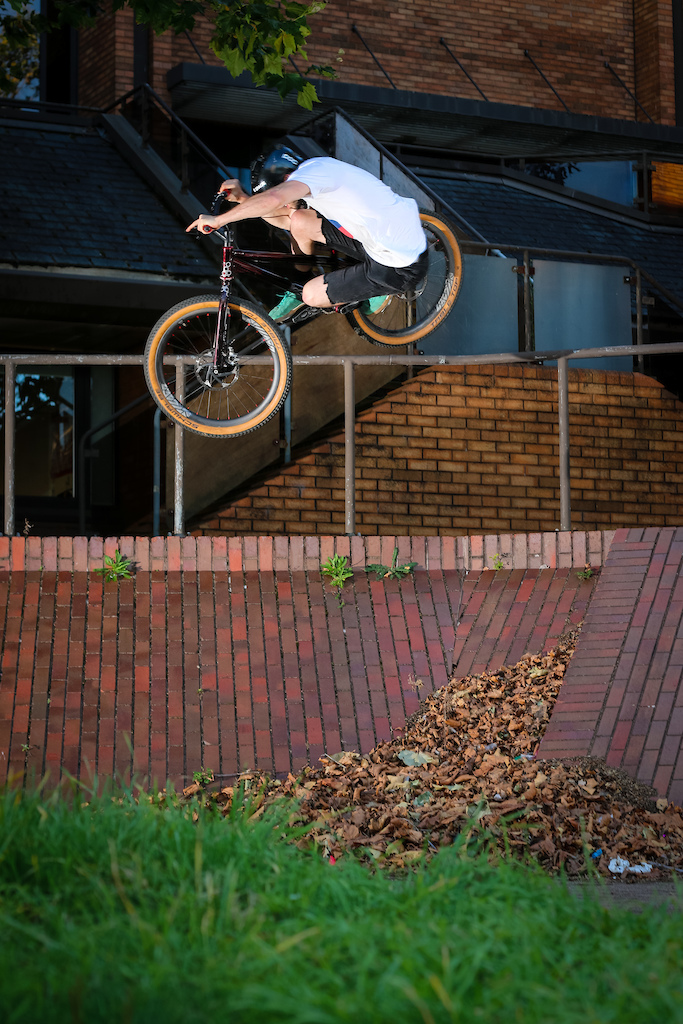 More information and merchandise are available at: https//www.aliclarkson.com

Huge thanks once again to Mark Westlake for making this video happen and to his wife, Nick, for the hospitality.

Thanks also to my sponsors: Inspired Bicycles for making the best street trials bikes (the model I am riding is the Hex with 26” wheels), Light Bicycle carbon rims for coping with my abuse, Chris King for the reliable hubs and bearing parts and to Sunlight for the amazing T68 motorhome.

Pablobarcelona (Nov 8, 2019 at 7:30)
No backflips or crazy tricks needed to be cool, this is awesome and clean pure street trials riding!!!! Congrats!!!!

dubiouslogik (Nov 8, 2019 at 9:05)
This is the best kind of trials riding - seeing lines where others don't, and just riding things as they are. one of my favorite riders

aljoburr (Nov 8, 2019 at 9:33)
As much as I would be inspired to go out & try to do similar trials moves, I have this mental block, that means do not have enough skill, getting far too old & do not like spending time in hospitals, but that is enough excuses
Amazing riding will such flow & as little bitch cranks as possible to keep flowing!

RadBartTaylor (Nov 8, 2019 at 11:47)
Ali kinda reminds me of Rodney Mullins, super technical and a maybe a bit difficult for most people to appreciate, but his stuff is ever bit as tech if not more so than the likes of Danny and Fabio. Love it....hope to see more.

But PB should probably correct the subtitle, considering a chunk of this is filmed in Cardiff:

> Ali Clarkson brings his trials skills to the south-west of England.

boss-matsumoto (Nov 9, 2019 at 1:56)
Good to see some good trial riding , it was long time since I seen good edit on here. You been lucky to have a weather like that in Cardiff , when I look outside my window its pissing.

foxinsocks (Nov 13, 2019 at 1:18)
Ali, Amazing stuff as always! I've been following your stuff since what seems like forever now, and never get tired! still remember watching your vids over a decade ago with my friends, getting stoked and taking our Zebdis/Echo controls for a spin an failing miserably at anything remotely as impressive

I think you've Inspired (some pun intended) more than you can guess.

I still remember how Leech's "Manifesto" style seemed unique and revolutionary - but in hindsight he was truly onto something. The sport has evolved into something so much more fluid and original. Its truly incredible!

vancouver-bound (Nov 8, 2019 at 9:45)
That was cool. Do trials riders who run tubeless experience less flat tires?

freemanbr (Nov 10, 2019 at 10:56)
Absolute surgical precision OMG, Ali you got your balance and twists so dialed its impressive what you can do in a couple cm of patch. Huge congrats!

dontrideontheroads (Nov 8, 2019 at 15:17)
Nice seeing my home town spots ridden so smooth! Makes me want to dust off the trials bike

sparkytrials (Nov 9, 2019 at 22:03)
Great riding and edit guys, some familiar spots in there. Rowen Jones, I guess that's a typo? I'm thinking Rowan Johns, and agreed the guy had big style and moves.