Up close and Personal with Bourdo

As I was sitting in the 90 degree Utah desert earlier this spring watching Robbie Bourdon pour Redbull over the lip of a 35ft hip that he intends to 270, my mind wanders back to the huge flatspin he pulled off in the last installment of New World Disorder. What would posses someone to try that? Why would he go back after it has beaten him so many times. What else does he have up his sleeve?“That will get 'er hard! ” Shouts Bourdo in the background. 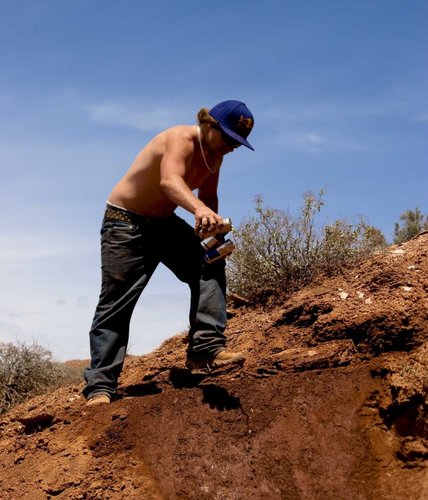 Quickly it brings my mind back to the task at hand. I am tagging along on an early film trip for NWD 10, getting behind the scenes footage for a bunch of Oakley vignettes that will be coming out the next few months. My focus on this trip is Bourdo. Robbie has been wandering the desert around Virgin, UT for almost a week looking for his next big thing. He is not quite sure what it is but he'll know it when he finds it.

“I haven’t even ridden my bike yet this year. There has been too much snow at home plus my hand has been hurt and it’s hard to hold on to the bars. This is my first real ride of the year.”

First real ride of the year, 270 a 35ft hip? Most would be content with a shuttle and some beers. In fact I offer to drop him at the top of Flying Monkey.

“Naw, don’t think my hand would hold up to that, I’ll just giver a go.”

This is the mind set of a rider who has been pushing himself and the sport for over ten years. Bourdo is known for manning up and going big. Not every time things go well. What separates him from the rest is that he picks himself up, dusts himself off and does it again, and again, and again, until things do go well. He is famous around the Freeride office for going back and completing stunts he tried the year before only to come up short. If you watch most of his segments there is usually one thing that gets the better of him every year, and then when the next year's segment rolls out he goes back and stomps it. With that determination it's no wonder he is the only rider to have been in all 10 NWD, has became a part of the Oakley family, and earned a spot as a Redbull athlete. Over those years he has traveled the world and has ridden his bike on more continents than most people have visited.

Drawing on that knowledge and experiences is what can allow him to get away without riding his bike for 6 months and then go on a film trip and throw down for the camera. When I hear ”DROPPING IN” I am not the least bit concerned for his safety. With Axel and Brad manning Freeride’s new cable cam, and me pushing the Red Camera on a dolly, Bourdo goes for it, spins huge, and eats it. On this day the jump gets the better of him. His hand is giving him trouble. He is having a hard time holding onto the bars and after a few close attempts he calls it a day. Sitting in the truck drinking a beer he doesn’t seem the least bit bothered by the day's events. He has been in this position many times before and knows that if it doesn’t go well today it will work out the next time. In my experience that is what separates the men from the boys, knowing when to say when, and from what I have learned about Robbie I know he will be back to have the last laugh.

Robbie Bourdon over the years:

If you liked the music, check out Character Traits, and Acres Of Lions.

And to check out my site vist me at www.ambroseweingart.com.

Also look for more clips and check out the happenings over at Oakley.

Waldon83 (Jul 18, 2009 at 0:51)
I almost had a punch on with his homosexual brother in Nelson. The guy was so drunk he had nothing better to do than try pick a fight. I've got respect for Robbie, but man, your brother is a chode

Bourdon is the coolest rider, allways making your jaw drop to the ground year after year. Go Bourdon!

JamesOliver (Jul 18, 2009 at 14:50)
My point was that he's smaller so doesnt need the extra travel or stiffness of a triple clamp fork. He is also a sponsored rider so probably has access to all the forks he wants yet he still rode a single crown at last years rampage when everyone else rode triple clamps which shows that the single crown has nothing to do with the shore riding.

funkedafro (Jul 20, 2009 at 7:06)
kona are just interested in the bike park side of things, thats why all their riders are slopestyle/dirtjumpers, and have pulled away from the likes of watson, carlon dunne, and bourden. they'll be sorry, with the rampage back who have they got riding it? i can't think of anyone, and as a lot of riders say:- to win the rampage is the most prestigous crown. Dr. Dew can eat my ass.

Chrisluvsbiking (Jul 18, 2009 at 10:50)
i wonder why bourdon keeps throwing his bike away from him. i'd never do that to my bikes, let alone to an intense slopestyle!!!

teammaryjaneracing (Jul 18, 2009 at 16:40)
My friend and I went to Interbike one year and saw Robbie in the Oakley booth. He went up and asked Robbie for his autograph and he stopped and thought about it for a while, then said," well...yeah...ok". Like asking for his autograph was putting him out or something. At freakin Interbike! We all have our bad days but that left a bad impression. Yeah, Robbie can ride, but what a dick. I asked Wade Simmons to sign my hat and he was the coolest dude. I'll always remember that. You're a professional athlete bro. Be a professional.

OlSkoolJake (Jul 19, 2009 at 14:35)
You try sitting in a booth all day. Being "nice" to people cause every little Tom, Dick & Harry want your autograph. Then some little shit gets his panties in a wad cause you took to long to give an answer about an autograph. He not paid to be nice to you he's paid to ride his bike. So suck it up Princess!! Think about it, would you wnat to sit around in a convention and sign autograph's. Or be out rippin trails? I'm betting Bourdo was thinking the latter!

dazem (Jul 19, 2009 at 15:32)
I would say its people like you and him would fit the name pincess than me or the person I responded to, he's not only paid to ride but to represent his sponsors, he's got the life, he's paid to be at interbike to endorse product, not be a dickhead, and I'f I were able to sustain a living by riding I'd have no problem being at interbike giving my signiture to potential customers for a few days once a year....with a big f'in smile on my face, I think he needs to suck it up and give his damn signiture like he's paid to and you need to suck it up and get over yourself cause I said somthing you dont happen to agree with

jervis (Jul 18, 2009 at 6:32)
heaps of people give him shit bout how is just a hack and has no style. but listening to his comments in NWD9 and this here makes me give him a respect for what he can do well, sending it!

DARKSTAR63 (Jul 18, 2009 at 12:59)
Guys like Bourdo are Legends and it is a shame that new kids come along and get all the exposure. This guy is hardcore, a true warrior of the sport. Much Respect.

ov3r1d3 (Jul 18, 2009 at 10:51)
as legendary as any other freerider 'cept hes still at it pushin as hard as ever, kudos to companies and filmers who stick by riders like him.