Where Glasses are Made - Oakley Factory Tour

Jan 22, 2010 at 14:50
by Ambrose Weingart
Tweet
I think the first real pair of sunglasses I wanted when I was a kid was a pair of Oakley Frogskins.

It was sometime in the late 80’s and my old $10 knockoffs weren’t getting me any points with the ladies and I was at that awkward age when I needed all the help I could get. They were sitting behind the counter at the local sports shop taunting me and I begged and pleaded for my mom to buy me a pair. It was as if my whole future hinged on that purchase, I was so mad when she flat out refused. In her sensible wisdom she stated in a tone I had heard before ”if you really want them, buy them with your own money”. I knew it wasn’t up for discussion. My mom was always like that when we were growing up. She would get us the basics we needed to look presentable but anything that was deemed “fashionable” we had to step up and get on our own. It would make us appreciate things more was her reasoning and we would thank her later on. So I spent the next couple of months mowing lawns and chopping firewood and I finally saved enough for my new shades. Then hockey season came and I desperately needed new goalie skates.


by ambrose
Views: 20,147    Faves: 103    Comments: 24
This was a story I was relating to some friends while I was down at Interbike this past year. We were all milling around reminiscing about our first pair of real sunglasses. I had just been talking with Steve Blick, Oakley's man on the scene. Blick is Oakley's sports marketing guy and as he describes his job title- “I deal with everything on two wheels…without a motor…and speed skating.” He had just invited me to swing by the World Headquarters the next week. It couldn’t have been better timing, I had a week to kill before meeting my girl for a surf/ride trip in Oregon so I jumped at the chance to check out the scene in SoCal.

The first thing I noticed when rolling into that place was the sheer size of it. It must have taken up a couple of city blocks. The second was the Tank. Sitting out front they have a fully functional (the barrel is plugged) military tank sitting there. I guess the US Government wants to be sure they get their glasses when they need them. 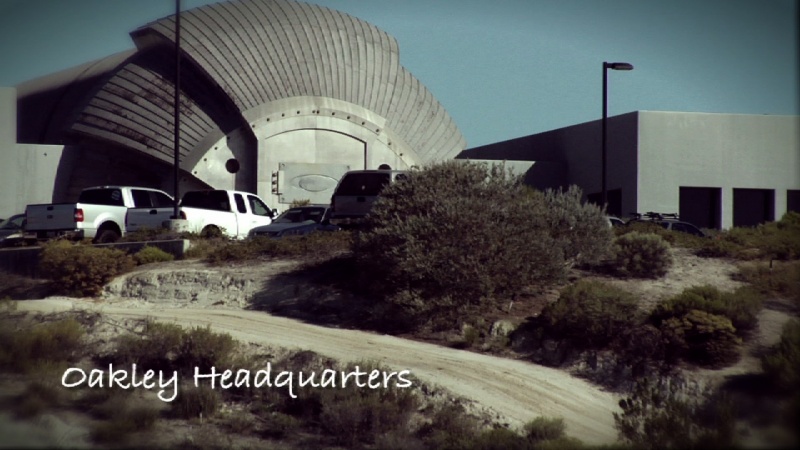 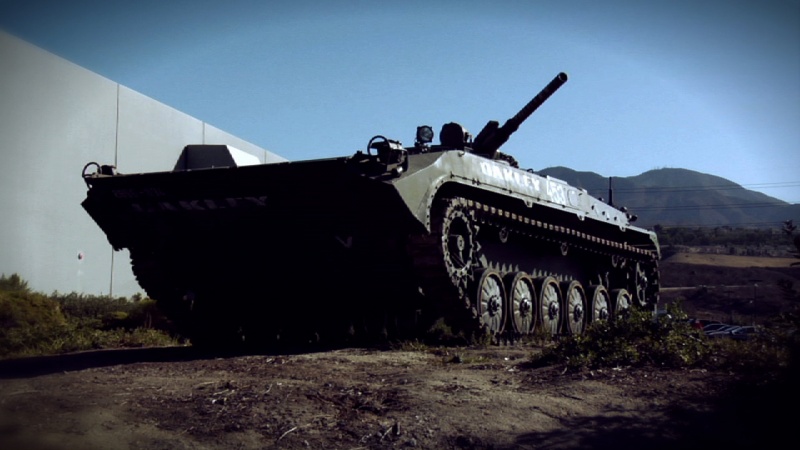 Blick met me at the front gates, we signed in and over the course of the next few days he proceeded to show me the inner workings of this massive machine. The 675 000sqft building houses every facet of the company. From design, R&D, sales forces to an eyeglass factory. They even have an enforcement agency on site that deals with those shady people who sell knock offs out of their trench coats. One thing most people don’t know is that they make their own lenses and glasses on site. Most of what I saw in those two days , I needed an escort and a retina scan to get too, but for the man walking off the street wanting the Oakley experience there is a retail section in the main hall complete with an Oakley museum. It chronicles the first grips to the latest eyewear and a walk through brought past memories flooding back. Ahhh remember the ”Over the Tops”…haha. 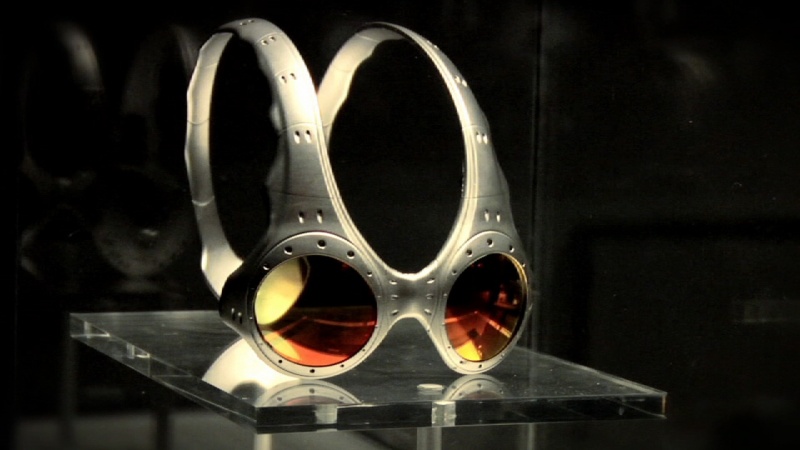 I can be a bit clumsy sometimes. Well actually, I like to call it focused. Spending your life with a camera in hand you tend to focus on only what you see through the lens and as a result I tend to scratch a lot of lenses. They fall off my head in the desert or get put in pockets with sharp camera gear in a rush to capture the action. So it was somewhat of a revelation to me when I found out they had a lens replacement station in the lobby. Could it be? If I brought my scratched lenses in I could get them replaced for a fee. If only I would of known this sooner. The beauty is any one can walk off the street and get this done.

As we wandered around looking for the tank driver, he turned out to be off that week, I very quickly realized that Oakley is a company that likes to take care of the people that support them. From athletes to employees, the company strives to enrich those around it. On site they have access to bike lockers and a weight room, a games area and a gourmet cafeteria, as well as the pump track out back and the full moto track out the front. Not to mention hundreds of acres of trails out the back door. 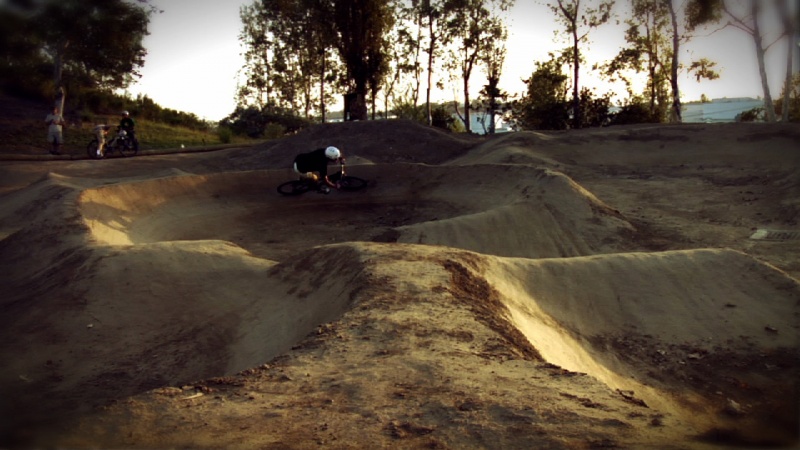 It’s pretty sweet when you can hit up a pump track on your lunch break. In all there are over 1800 employees working there around the clock to bring Oakley products to the shelves. I know towns smaller than that!

After a few days of touring and some filming it was time to move north. As I was crawling through the infamous LA traffic on my way to Santa Cruz for a surf session with McCaul, I had a thought about the distant past. I never did get those Frogskins when I was a kid. “That’s ok” I thought, “at that age I wouldn’t have known what to do with a girl if I had a caught one.”

Lopes goes SO pro in this edit

tiggerwantstobike (Jan 26, 2010 at 6:27)
haha yea it is ..at 1:45 if u watch the manikin in the window its actually lopes trying to stand still but you can see the snowboard next to him moving as he wobbles :L haha

smike (Jan 25, 2010 at 7:08)
I've never been as loyal to a brand as I have with Oakley. Saved up for my first pair when I was 12. Went through countless pairs after that, but the good thing is, if you keep them in good shape, they keep their resale value. I'm nostalgic about some of the models I had... Razor Blades, Mumbos, Sub Zeroes, Eye Jackets, Pro Frames, Juliets, Square Wire 2.0, Scar, Plate, Crosshairs, Magnesium M-Frames, Crowbar MX, and Twitch. Crazy. I could have bought a DH bike with all that! Now I just have one pair of glasses and one pair of goggles. Kind of wish I started a little museum.

radek Mod Plus (Jan 25, 2010 at 0:50)
That's a really cool piece. Especially seeing how big the whole place is and that all the manufacturing is done in house, which is something I did not think they did. Awesome to see!

badgermeister (Jan 25, 2010 at 6:26)
who bought a set of over the top glasses really? my mate from ghana showed me a ghanian dance video with this guy pretending to be the 'mad stuntman' (for all you guys who remember 'i like to move it!') and he had a pair on. i've never p*ssed myself laughing so much!

jaycubb (Jan 25, 2010 at 11:18)
realy sick feed man! im lucky enough to work for one of the 5 oakley stores in the uk, and even more lucky to be part of one of the best companys i could ever want to work for!
my first pair of oakleys were Gascan S's in white

trendy,
i now own the majority of the jupiter colourways and some of the xmetal ranges.
its a great company and the products are the BEST, anyone wondering what brand to go to for any eyewear should go to oakley... if you need persuading come for a chat with me in the oakley store in bristol

its a good job isnt it!!

jaycubb (Jan 26, 2010 at 10:10)
it most certainly is! good to see theres more employees out there that are into there bikes! morless all the bristol store are ski'ers

FreerideStian (Jan 25, 2010 at 2:40)
Oakley is my favorite brand all over! Use their products for mtb, skiing and casual clothing. Never been dissatisfied! Huge props to one of the greatest companies!

Unfortunately, my pair of Oakely carbon fiber shelled gloves only lasted two days during moderate use before two huge holes appeared between the index finger and thumb on both gloves. So, begin that I am domesticated, I stitched up the holes and cursed Oakely. One month later a pull tab on one of them which is used to slip the gloves on, tore off of the glove. I was displeased. A few weeks later the palms of both gloves had about three inch holes from riding ramps and doing some trials too. I did not fall once and damage these gloves. I became more than displeased. Is this not disgusting?

phunkt Plus (Jan 25, 2010 at 0:58)
best customer service ever - i had a set of m frame's with heater lens snapped in two places.they replaced it within ten days (free of charge) -two years out of warrenty.....now i have 3 pairs of oakleys..epic

Padskins93 (Jan 25, 2010 at 5:35)
i work for Oakley, and love doin it!! just wish i could visit there one day, hopefully get promotions and shit so i can eventually work there

i work in an oakley vault store tho, so its the outlet one, but still.. its AMAZIN!

and i been told by my manager and area manager that im making amazing progress, im winning sales and stuff, and ive only been there just over 3 months!

igotthis (Jan 25, 2010 at 20:54)
Yeah dude all the time. people are pretty good about maintaining the stuff and every once in a while Oakly guys will come out and build something new, last summer we got a pump track

lenmerderdenfer (Jan 26, 2010 at 14:36)
expertucker, Wrong. Read my earlier comment if you like. I once though the same as you in regards to Oakley.

Ok buddy, just relax, no one is judging you.