On September 22, 2013, Stevie realized a seemingly impossible dream and took the UCI Downhill World Cup Overall title in Leogang, Austria. Today, 8 years since that historic day, Anthill Films is excited to announce a new feature-length documentary film in partnership with the Stevie Smith Legacy Foundation and Red Bull Media House that follows Stevie’s contribution to the sport after his passing in 2016.

All proceeds of the film will go to the Foundation to continue Stevie's legacy of inspiring the next generation of Canadian riders. The World Premiere will screen November 5 in Stevie's hometown of Nanaimo, British Columbia. 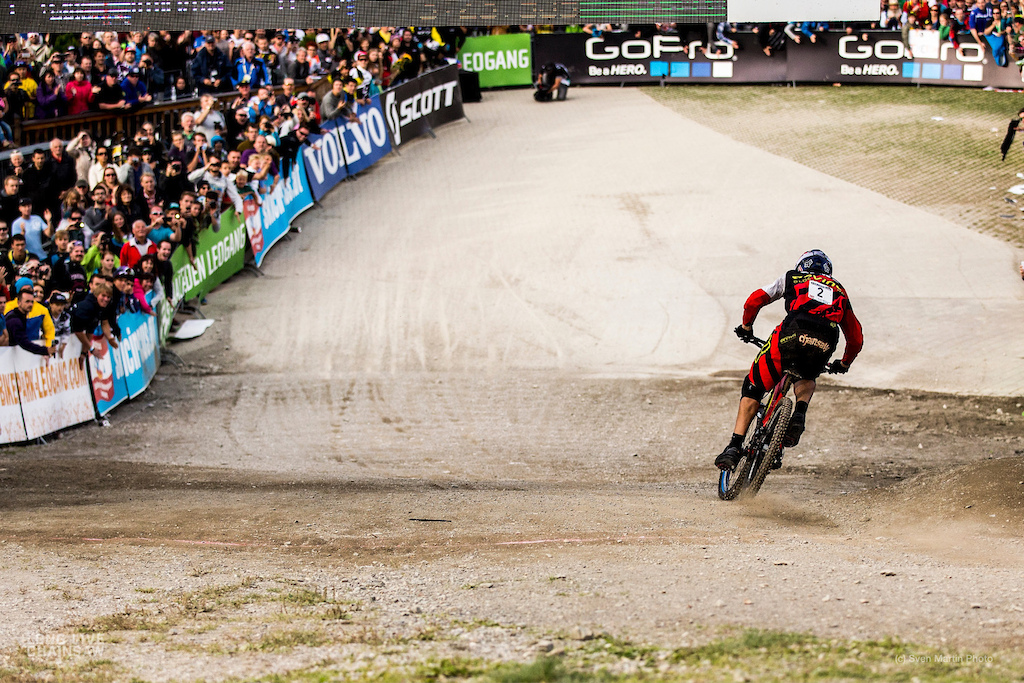 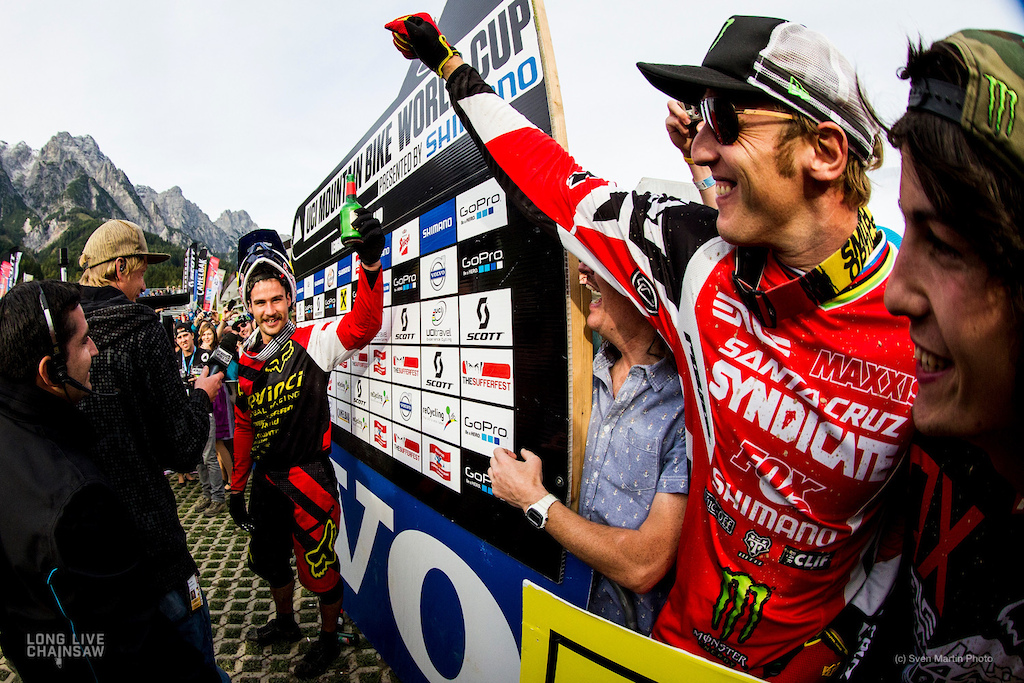 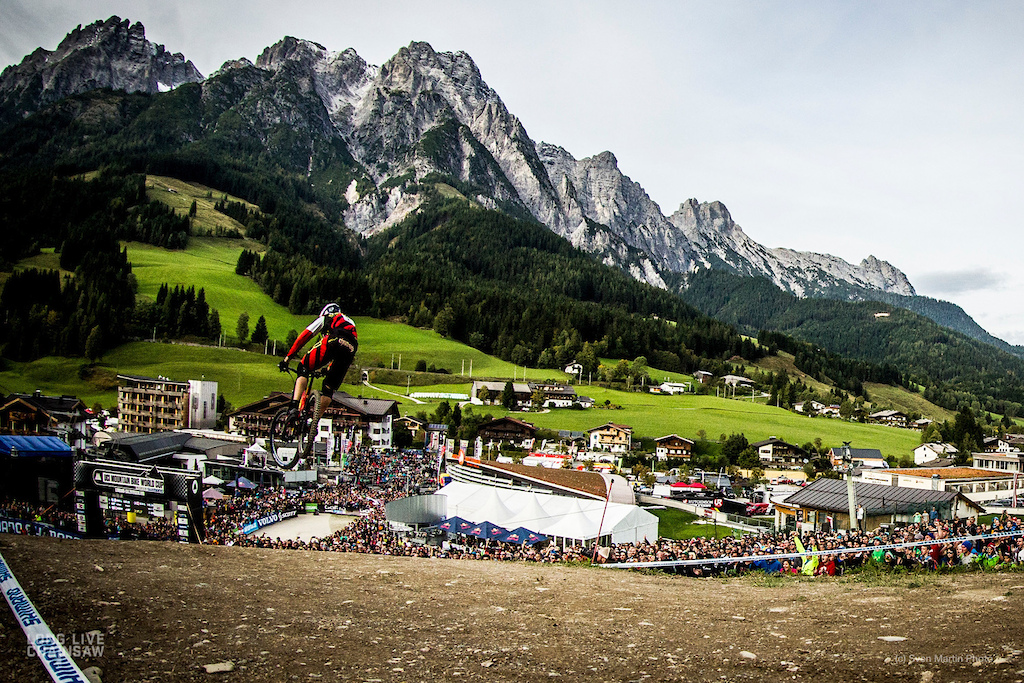 Interested in hosting a premiere for Long Live Chainsaw in your city or town this Winter? Follow THIS LINK to apply for a premiere event.

dsoller33 (Sep 22, 2021 at 19:12)
Paralyzed just under 3 years ago in a freak mtb impact at 32 years old.
Use a wheelchair everyday. Ride an adaptive trike. Have ridden mtn bikes for over 25 years.
My main motivation in not only getting out of bed everyday but getting back on the dirt are people like Stevie and McGazza...

Had the privilege to meet Kelly, never met Stevie but I know those 2 would do anything to ride again and wouldn't let any circumstance get in their way. So I shred for those that can't!

crys-vb (Sep 22, 2021 at 8:22)
totally. i remember the one time i met him, i was full on fan girling, i went around telling the whole office like, "THAT'S stevie smith" "he's the BEST biker in the world" they all knew already (he knew the family/friends of the business) and he was the most humble guy. he was stoked i was stoked on bikes and it was just so nice. always made time for his fans. a true hero, a real "great canadian kid'

mammal (Sep 22, 2021 at 14:47)
@FilipStarcevic: 2016 was such a huge year for me, I had just got my first career job after so many years of college/uni, when I heard about Stevie's accident. I was on my way over from Victoria to start my job in Vancouver, and stopped in Duncan for a solo pedal up Prevost and a "memorial ride" down the old track shown in Seasons. It was a tough climb but an even tougher reflection at the top.

VPS13 (Sep 22, 2021 at 8:30)
I was so happy when I heard his mom mention this on the Tippie podcast. Apparently once the film is done they are giving Tianie all the footage they have compiled for her to have. Really looking forward to this, hopefully more people learn who he is and the incredible legacy he left. LONGLIVECHAINSAW

anthill (Sep 22, 2021 at 9:23)
It has been such an amazing community effort from everyone who has helped with the film. There is a massive archive of footage and photos that will be a legacy for the Foundation for years to come. And all the profits from the film will be donated to Foundation so they can continue and grow their great work.

robmarini-jet (Sep 22, 2021 at 8:23)
Before you guys downvote me, let me tell you that I really miss Stevie as well. Not just the races with him were great, but also the movie segments were great. Including one with Gee Atherton. But (this is the part where you downvote me) I was supporting Gee at the time. After that championship, I am under the impression that Gee kind of decreased his racing performance severely. Never was the same again. Anyway, Long Live Chainsaw.

lymeathlete (Sep 22, 2021 at 9:51)
Anybody else have the hairs on their arms standup, get goose bumps and shed a tear or all at the same time?

I am going to be a mess when the trailer drops and who the hell knows how my emotions are going to be when the doc drops.

Thank you @anthill! Continue to be the best in the business, by far.

Looking forward to seeing it this winter.

dirtjump132 (Sep 22, 2021 at 8:04)
was having a somewhat bad day until now. A great reminder of his upbeat and relentless attitude. cant wait

hardyk (Sep 22, 2021 at 19:07)
Oh my god the feels. I will always remember that MSA win and the roar of the crowd when Stevie passed the finish line and the green appeared, i still feel it in my bones when i think about it. I can't wait to see this.

It would be pretty cool to show this premier at the Cowichan Performing Arts Center in Duncan BC. With Mt. Prevost watching in the background. I ran into Stevie on Mt Prevost one time. We didn't say much other than a quick but cheerful "how's your ride" or something to that effect, but ill never forget that, just goes to show what a lasting impression that man could leave on somebody. Legend.

mfoga (Sep 22, 2021 at 9:23)
His son talking about how they could have a deeper relationship now and his breakdown on podium both just about got me.

Flunt (Sep 22, 2021 at 11:43)
LONG LIVE CHAINSAW. He still is my favourite rider of all time. Not just his riding but his presence were just so amazing to witness. I am happy that I could see it with my own eyes!

anthill (Sep 23, 2021 at 14:47)
Such an awesome shot! They were so stoked for him they were spraying him with beer during his post race interview. Classic!

MendelMu (Sep 22, 2021 at 23:17)
Cant wait, he came up at a time when I followed DH racing much more closely and the rivalry with Gee made for great racing. Stevie did what he set out to do, absolute legend.

FM67 (Sep 22, 2021 at 15:26)
Shutting the kids yesterday afternoon and while driving Orca by WinterSleep came on and instantly thought about Stevie.

TotalAmateur (Sep 22, 2021 at 8:28)
anyone feel like this guys name is just becoming marketing material? no disrespect to Stevie, but with so many other legends dying it feels weird to focus so heavily on one person......

TET1 (Sep 22, 2021 at 8:44)
I don't think this has anything to do with marketing. I think it has everything to do with Stevie Smith being somebody we all aspire to be like; someone we can look up to and admire as an absolute wonderful human. Yes, so many other legends have passed, but Stevie feels different. Something about Stevie just speaks to our human nature and our souls. He was the salt of the earth and that's why people love him and admire him.

TotalAmateur (Sep 22, 2021 at 9:15)
@TET1: huh, I guess I'm just out of the loop on that one. something about idolizing one rider out of so many because they were 'a really good person' just seems to invite comparison to others. Would love to just see a group tribute for the likes of McGarry, Smith, and Lund.

wilsonians (Sep 22, 2021 at 9:21)
Im not really sure why celebrating someone's life and legacy in a positive manner is ever a bad thing, even if you do consider it marketing material? Who cares if Anthill and Redbull are the producers on this. I think its great that they are highlighting what he did and how he did it. Do you also think its bad that they did tribute pieces and videos for Mcgazza?

TotalAmateur (Sep 22, 2021 at 9:28) (Below Threshold)
@wilsonians: find me where I said this is a bad thing......never said it was a bad thing, just that it seems the whole industry is hyper aware of one rider

Bomadics (Sep 22, 2021 at 9:28)
@TotalAmateur: Thanks for wishing death upon me you happie chappie, go ride your bike, but I seriously wish nothing but happiness for you though, I don't play the I wish you were dead game.

wilsonians (Sep 22, 2021 at 9:38)
@TotalAmateur: The statement of 'its only for marketing' indicates you think its not positive. They have done tribute videos for mcgazza and lund. Lund has a memorial bike park like Stevie. They still do Mcgazza fest every year in tribute to Kelly. They aren't forgotten at all. This just happens to be the latest tribute. And yeah, Stevie was likely the biggest name given his prominence in DH so you will see more on him.

TotalAmateur (Sep 22, 2021 at 10:04) (Below Threshold)
@wilsonians: I love how you put quotes then misquoted lol. I never said it's only for marketing, I'm saying it's becoming marketing material. in the day and age where nearly ever corporation panders to values and sentimentality, I don't think it's absurd to point out.

Bomadics (Sep 22, 2021 at 10:43)
@TotalAmateur: The people here think you are acting like an idiot, but I don't know what a knee jerk is, is that anything like a normal jerk?

giantwhip (Sep 22, 2021 at 10:48)
He gave it his all every race and was well liked. How is that not inspiring enough to remind new riders about his legacy?

giantwhip (Sep 22, 2021 at 10:49)
@TotalAmateur: maybe take a walk before responding. Think it over before posting a stupid response

rockyflowtbay (Sep 22, 2021 at 11:29)
@TotalAmateur: They all have had parks or contests named after them, and they all deserve it.

weebleswobbles (Sep 22, 2021 at 11:53)
So on your profile you say that you are transgender and trans-racial and for everyone else not to be a bigot. You should probably reread what you write before you post it. Just because you say no disrespect before you say some disrespectful shit doesnt make it not disrepectful.

weebleswobbles (Sep 22, 2021 at 12:02)
@TotalAmateur: I think he was being matter of fact when he said user name checks out. Yup total amateur.

mammal (Sep 22, 2021 at 12:22)
@TotalAmateur The name is actually being used to support the riding community here in BC, and Anthill has a LONG history of working very closely with Stevie. Is that enough to justify to you a full-length doc about his life? They even mentioned all proceeds go to his foundation, so wouldn't that be pretty much the best kind of marketing possible in the mtb community?

The fact that other well-known riders have passed has nothing to do with Stevie's legacy. And it's LUNN. Jordie Lunn was also a legend, and if he were here today, he'd be the one handing out hankies at the premiere, they were good friends.

mammal (Sep 22, 2021 at 13:36)
@Bomadics: Indeed, they both were. I knew them through racing and riding on the Island, and throughout BC. Both were amazing dudes, true inspirations for everyone around them, and they created huge holes in the community when they went.