Behind the Build: Brett Rheeder's 'Moments of Clarity' Section from Return to Earth 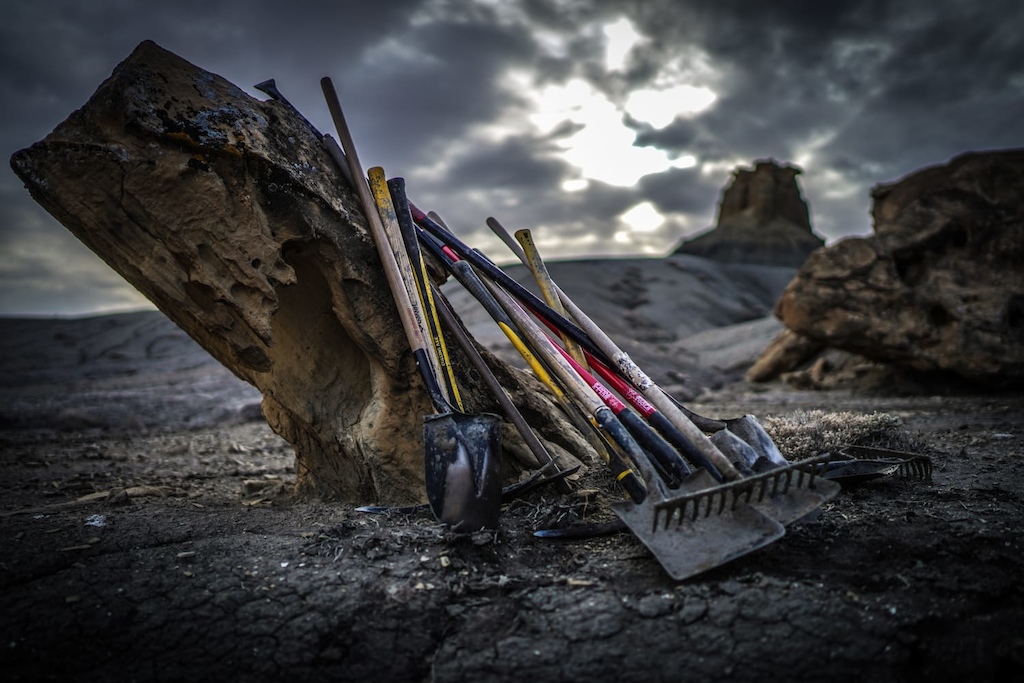 The Moments of Clarity segment from Return to Earth showcased some of the gnarliest big mountain and slopestyle riding of the film, a demonstration of Brett Rheeder’s mastery during his first time filming in Utah. Yet behind all those impressive aerial feats, butter-smooth slopestyle tricks and roosting corners were hundreds of man and machine hours of digging, shaping, raking, watering, rock placing, sandbag filling and many more physical tasks. In the Utah desert, you only ride and film what you’re willing to build yourself. The following is an account of how this mountain bike film segment came together from the Anthill crew, the digging team and Rheeder himself. Listen to the audio bites, enjoy the photos and then hop into the cockpit for a ride down Rheeder's big mountain line with the 360 VR-compatible video.

Note: All trail building in Return to Earth was done on private land with express permission from the land manager. In the case of the Moments of Clarity segment, the land had been heavily used for motorsports and large scale film productions in the past. Always get permission before breaking ground on your build! 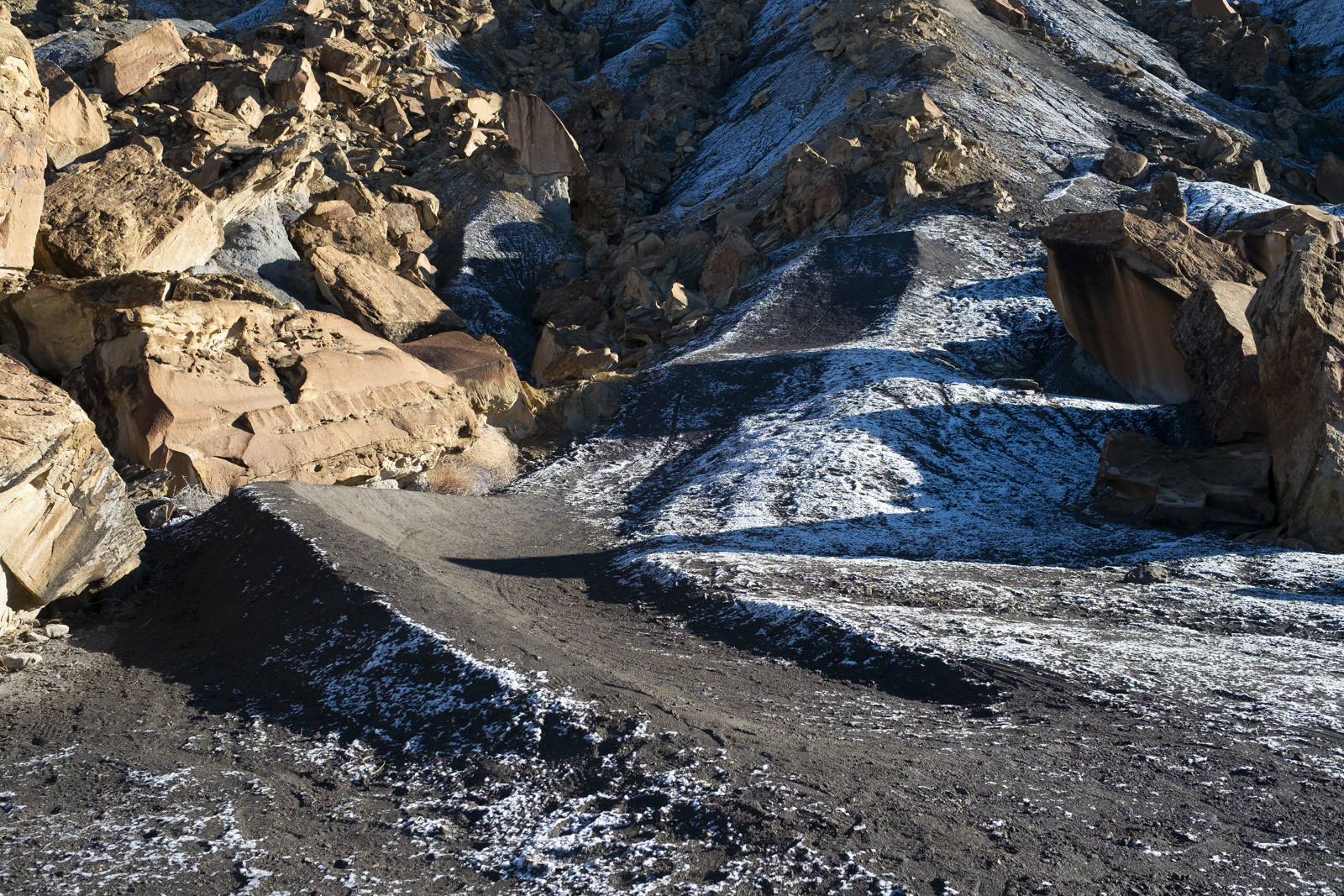 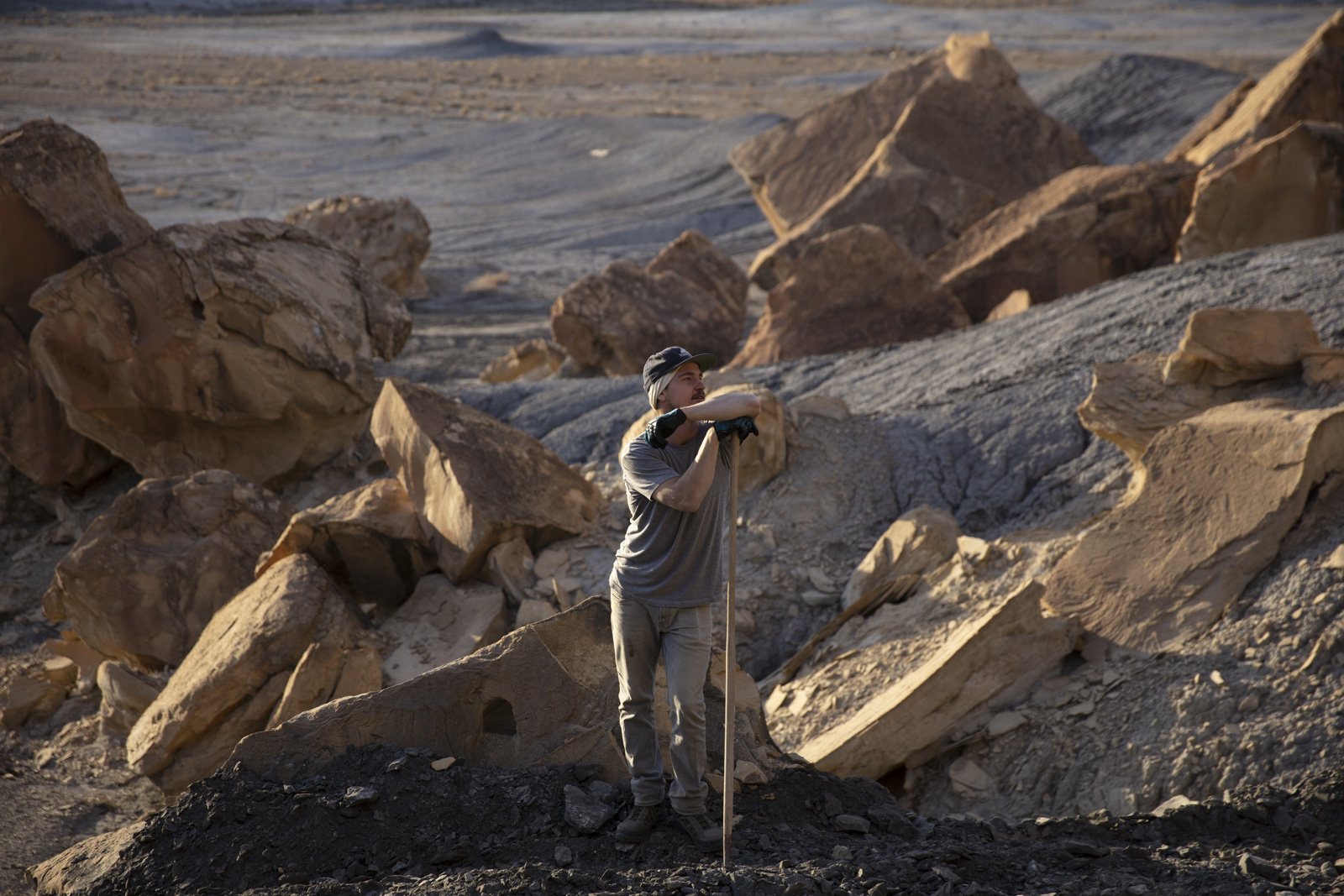 Give me Land. Lots of Land.
We should first start with the site at which this segment was filmed. Known as “The Moon,” this rather large parcel of land sits near the town of Big Water in southern Utah near the border with Arizona. The land belongs to the State of Utah School and Institutional Lands Trust Administration, which is basically a management authority for state-owned parcels of land. You can recreate there, though given the large distances you need to cover it’s mostly frequented by motorized vehicles like dirt bikes and ATVs. The Trust Administration does lease parcels of land to commercial interests (everything from cattle grazing to oil and gas extraction to telecommunication towers) and the profits of those leases help fund public schools, universities and hospitals. In the scenario of filming Return to Earth, Anthill applied for an official Right of Entry (and paid a requisite permitting fee) which included being allowed to shape the landscape by hand and excavator machine. 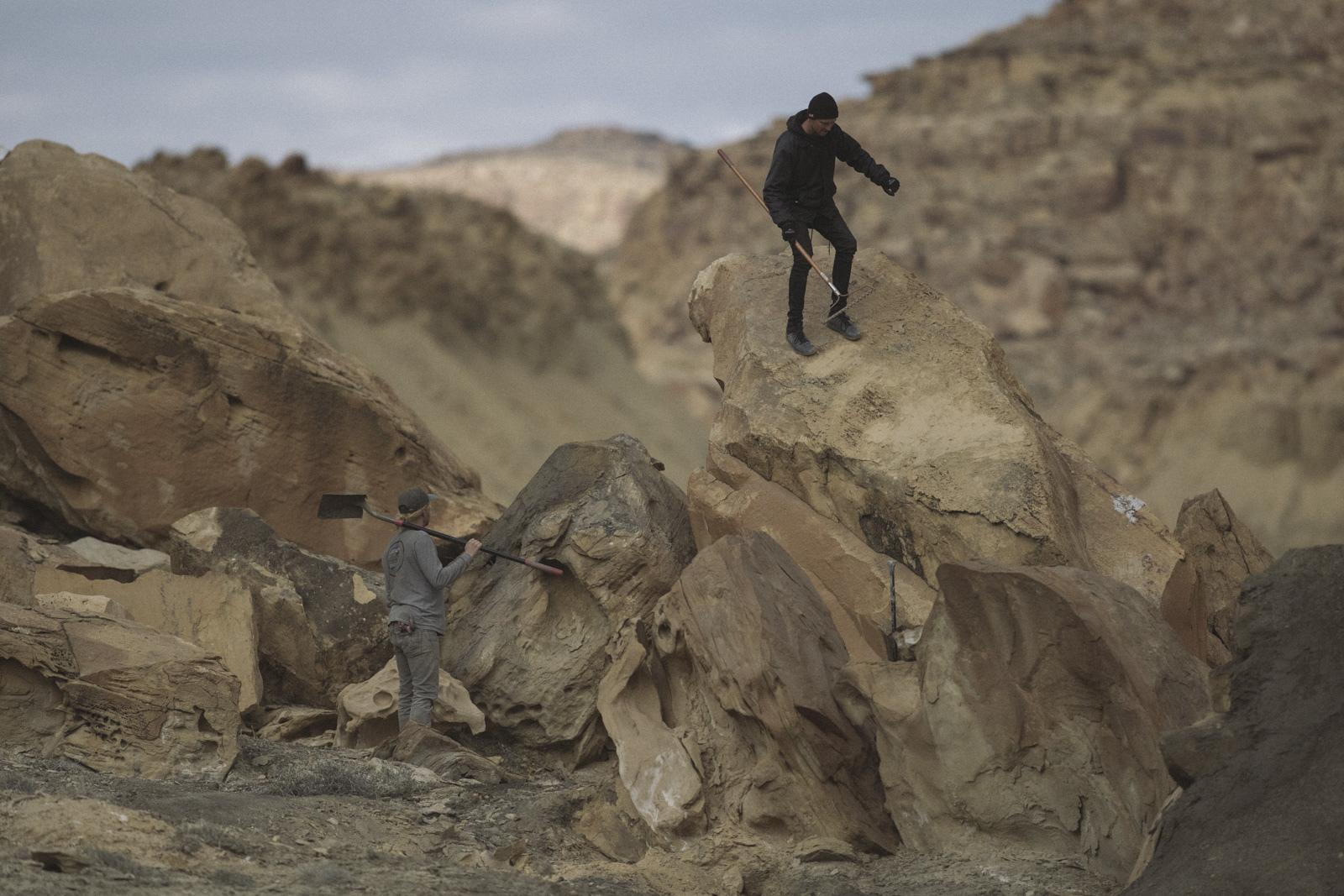 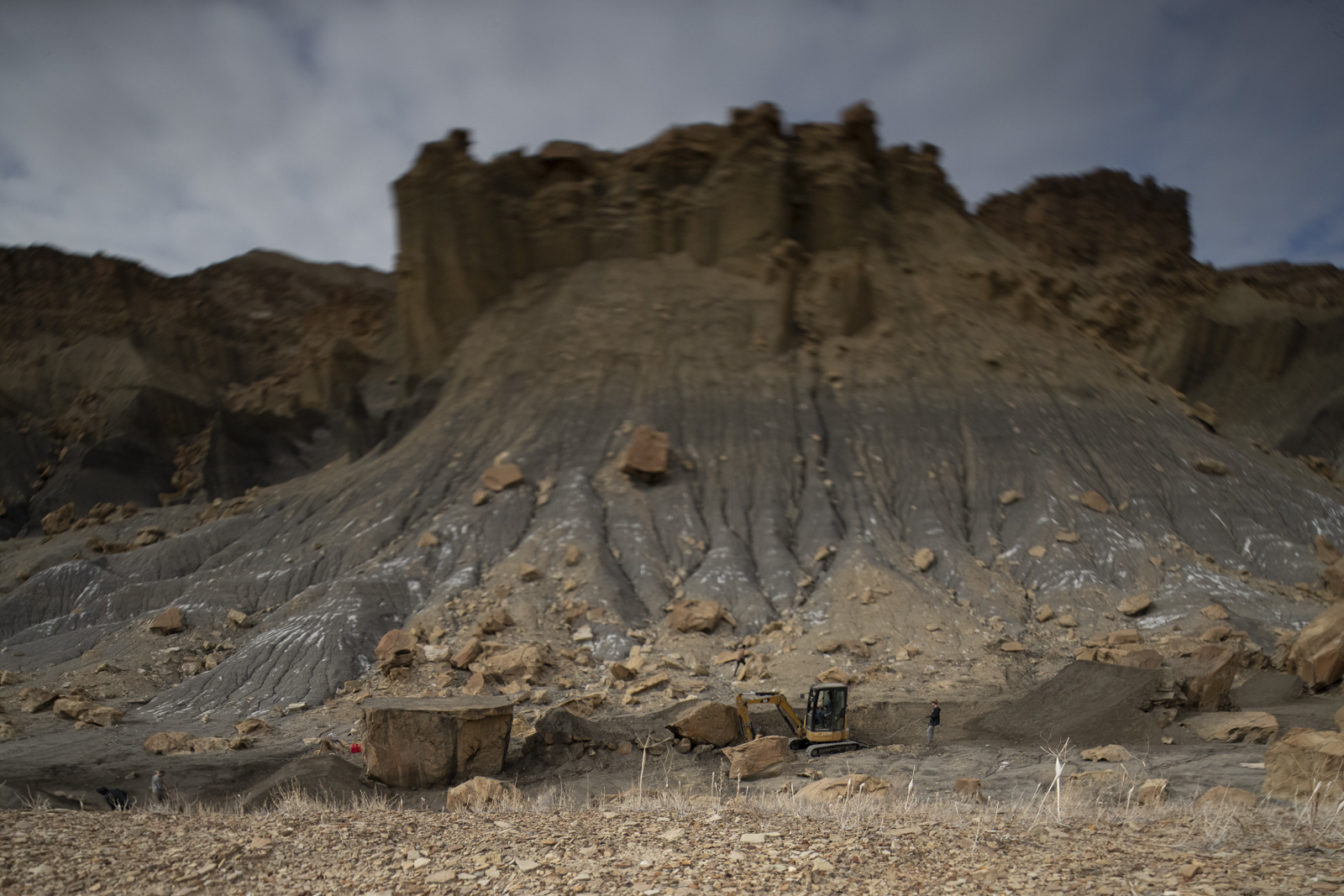 00:00 04:21
Digging In
The level of mountain biking has risen rapidly in the last 20 years, and so too has the scale of jumps and features that help launch riders into the air and land safely again. It’s no longer just a matter of scratching in a line with a hand shovel before hucking one’s meat when the cameras are rolling (though that still happens quite a bit). For Brett Rheeder, capturing his signature blend of slopestyle and big mountain riding required a lot of time shaping features that would allow him to showcase as many tricks as possible in this terrain. This has been an ongoing trend for competitors at events such as Red Bull Rampage. 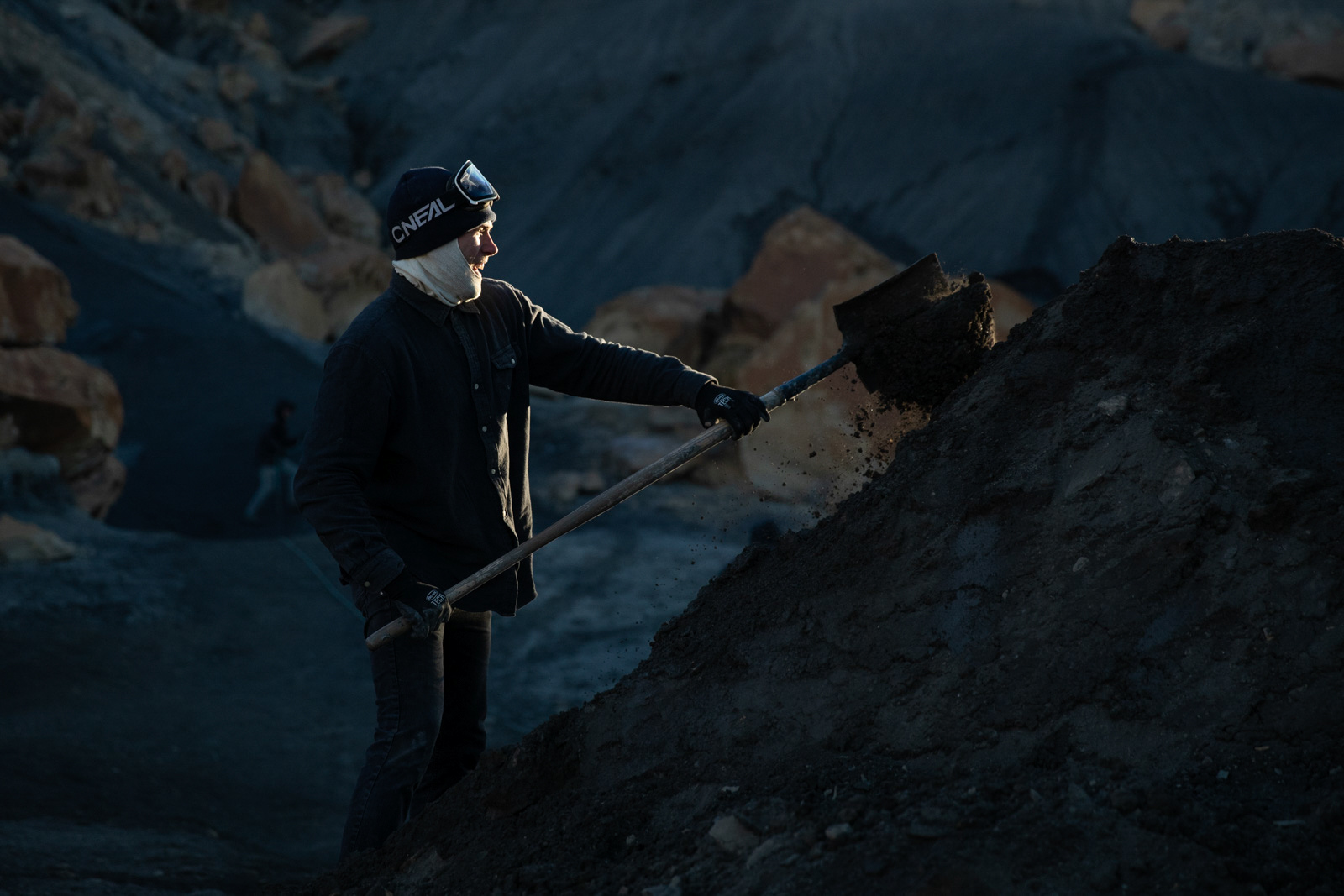 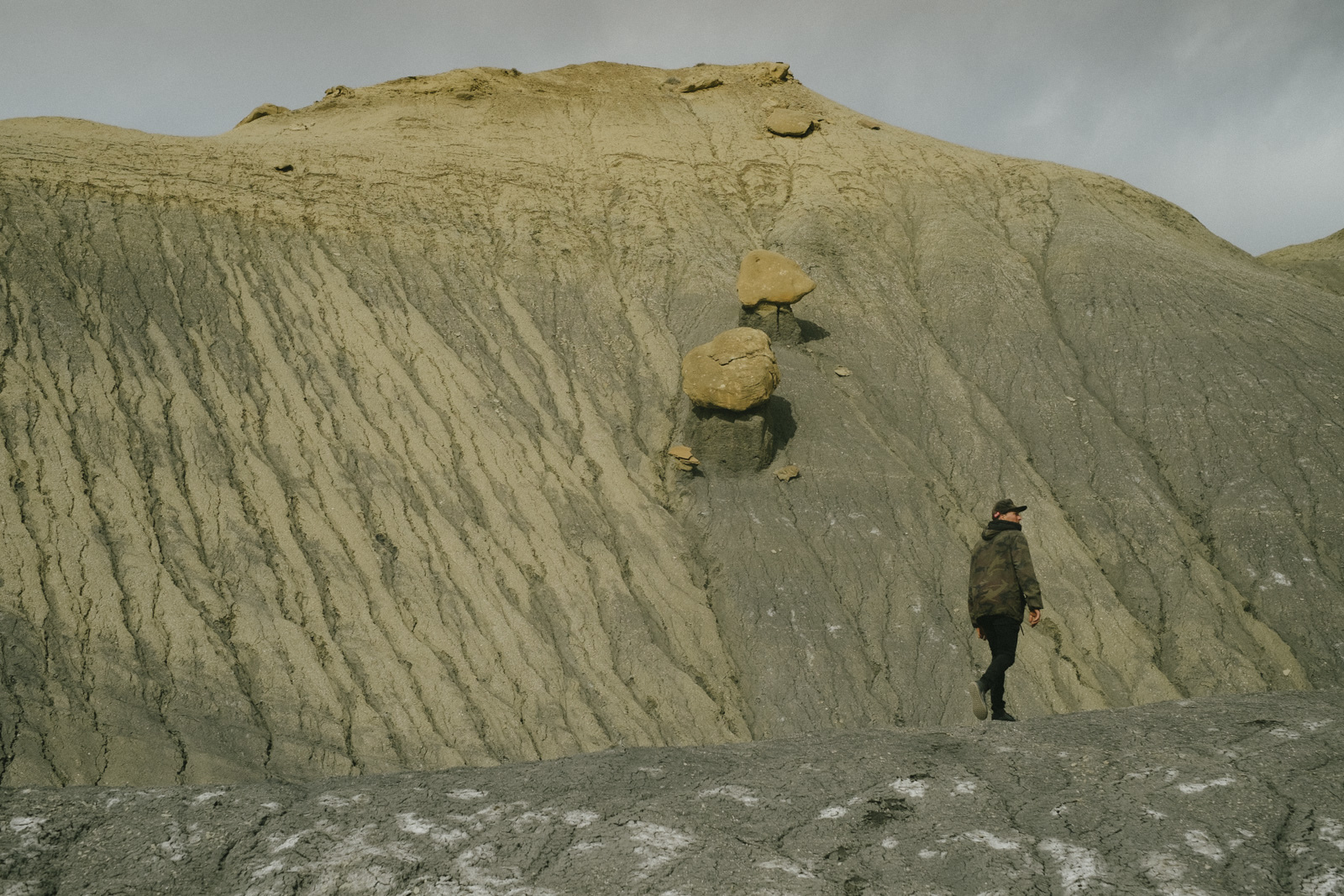 The idea of the “Moments of Clarity” segment in Return to Earth was to not have any creative vision limited by resources. To that end, Rheeder and the Anthill crew came armed with a mini-excavator and four digging specialists; Dustin Gilding, Austin Davignon, Ben Byers and Matt MacDuff. Gilding and Davignon are two of the founders of LOFT Bike Parks who first worked with Anthill to craft jumps for the 2016 short Not2Bad. After doing an exceptional job on a tight deadline for that project, LOFT was added to Wittenburg’s digger speed dial list. Byers and MacDuff — both accomplished diggers and riders themselves — were called in reinforcements on this project. 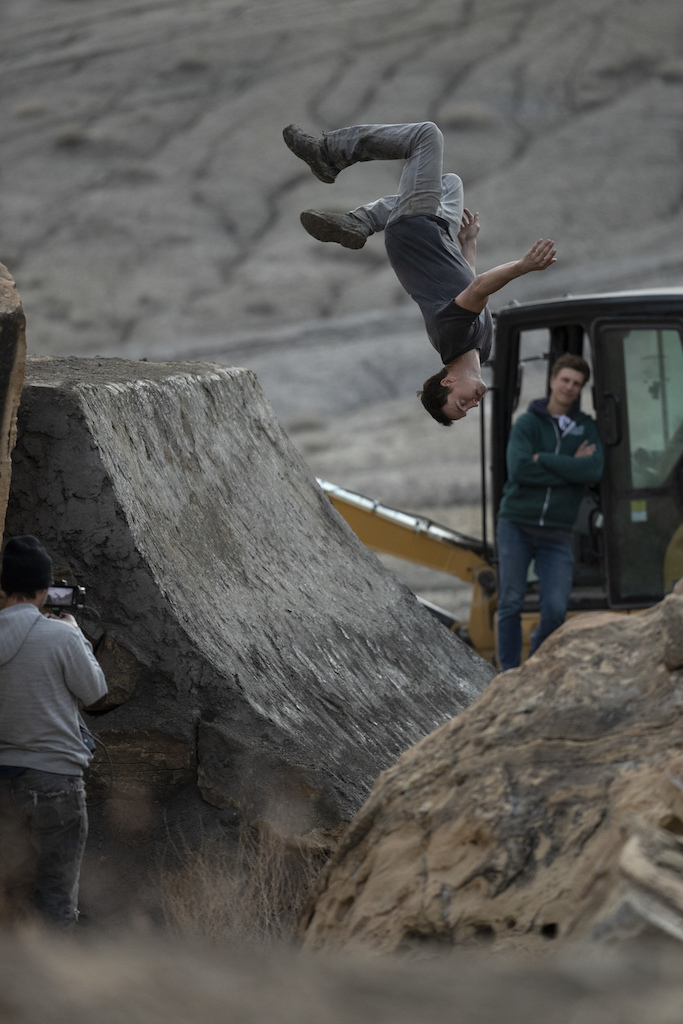 Austin checking the ramp angle is just right
Moving dirt with a CAT 304 E2 mini-excavator accelerated the process for many of the features lower down in the valley such as the cork 720 jump feature and the satellite dish. But the big mountain line (including several step down features) were all perched higher up the walls and out of reach of the excavator. That meant some good old fashioned elbow grease by the diggers, as well as hundreds of sandbags all filled, stacked and dutifully covered to look as natural as possible. 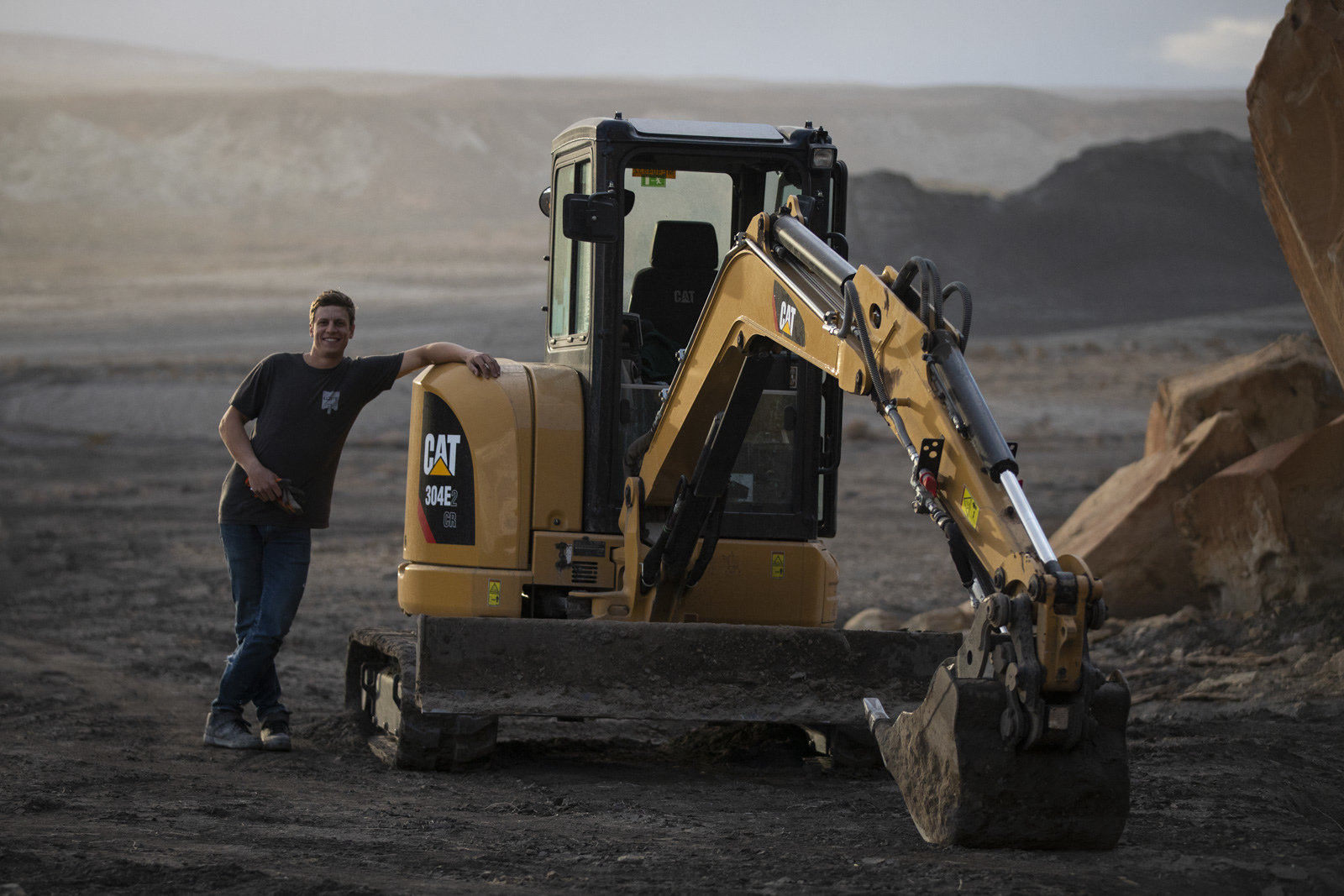 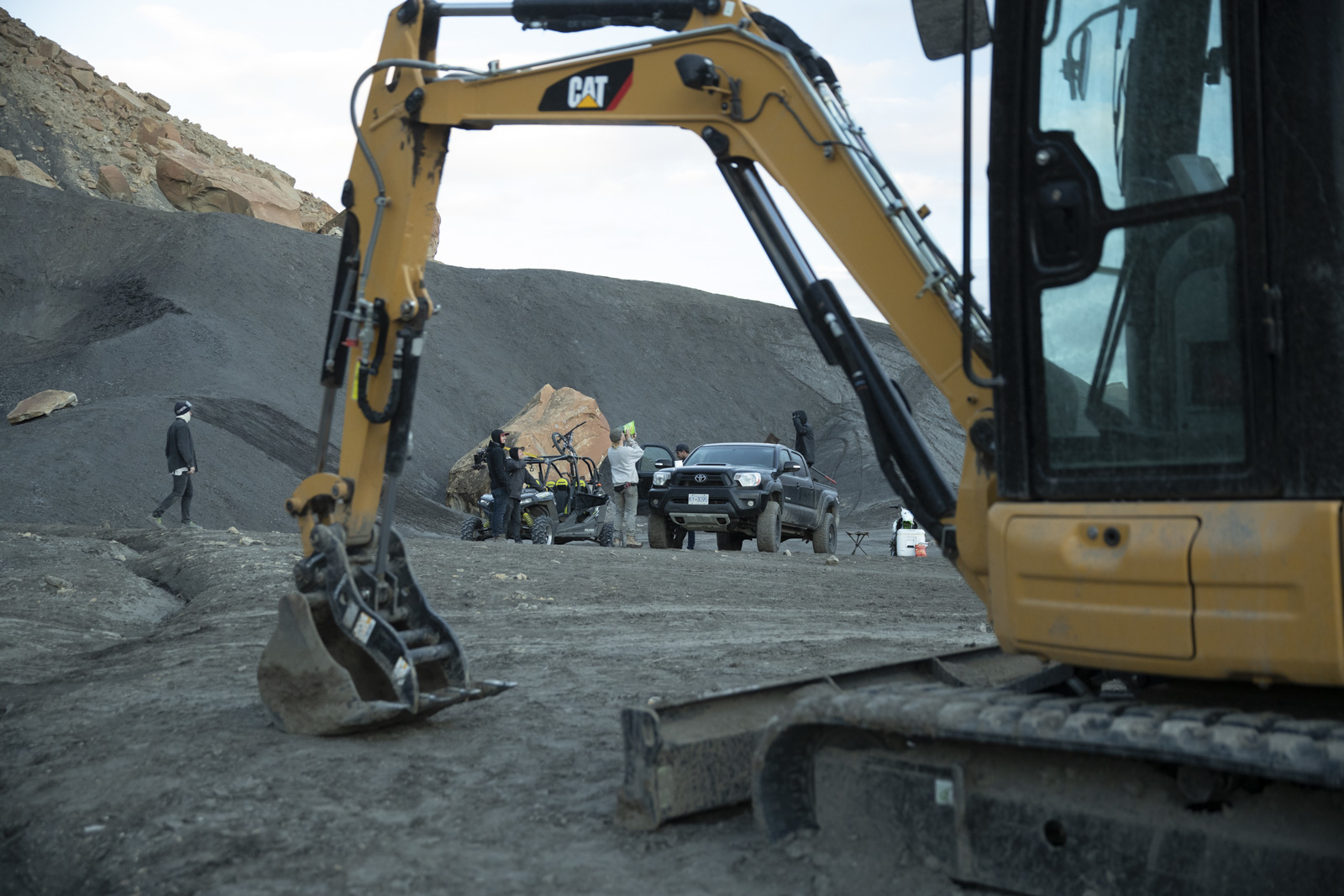 Hydrate or Die
As any builder knows, shaping dirt without sufficient water content can get a little tricky, especially if your filming location is in a desert in the middle of nowhere. To give the jumps and lips adequate hydration, every day of the shoot the Anthill crew drove in an 800-Gallon water trailer with a 300-foot hose. When the hose didn’t reach those higher features, they filled buckets of water and carried them up two at a time. 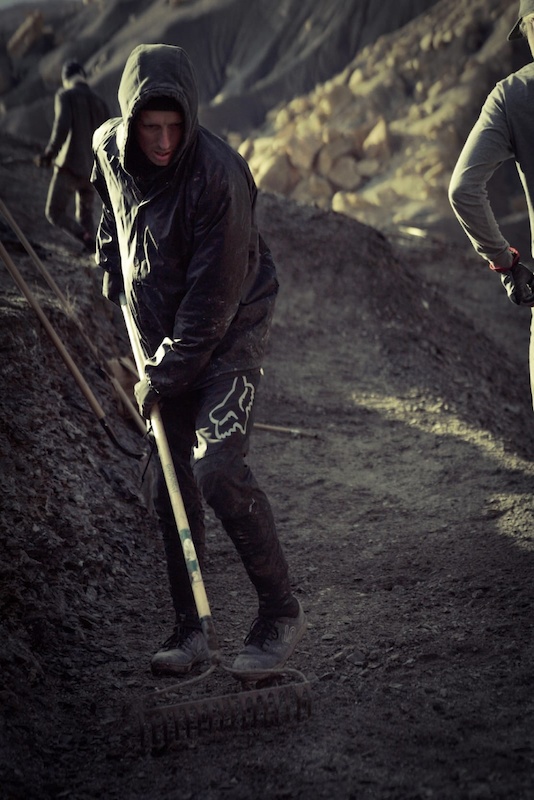 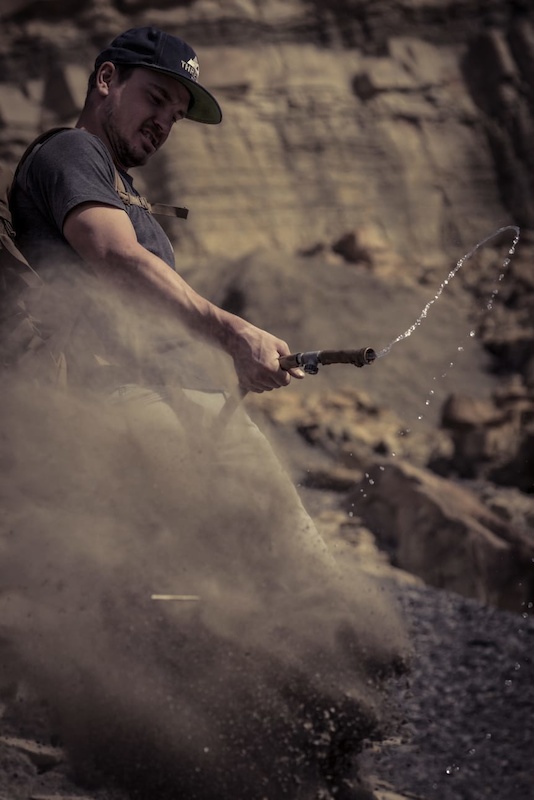 Hard work indeed. For the slopestyle line, what began as a series of scattered boulders was meticulously shaped into a near-perfect set of circular-curved transitions. One of the larger jump landing runouts - at least two acres of dirt - was raked by dragging a fence behind a side by side vehicle then finished by hand rakes to erase hundreds of moto tracks. It took three weeks of 11 people (including digger crew, film & support crew and athlete) laboring 12 hours a day to produce a four-minute mountain bike film segment. And all with zero plywood.

The polished look of mountain bike films comes down to a lot of heavily-researched location selection, specialized film equipment, skilled camera operators and of course, athletes that are able to do what few others are capable of doing on their bikes. Rheeder came to Utah looking for a unique riding segment. The digger crew helped him shape that vision. The end product was able to make a desert full of skid tracks and moto roosts appear as a mostly-untarnished landscape. To get the full 360 perspective, check out the video below and pan around the landscape of Utah yourself.


For more background on the "Moments of Clarity" check out In the Blink: Episode 2 - Creativity

scott-townes (Sep 27, 2019 at 7:35)
"The fact we were permitted to use an excavator for the build in Utah was something we’d always dreamt about. All those years at Rampage slaving away in the heat... Can you imagine if we’d had a machine out there?"

Oh god, please never let this happen. Sick project but that would be the death of Rampage.

brycepiwek (Sep 26, 2019 at 20:35)
Best build crew there is! Stoked to see you guys get some limelight for all the hard work. The Loft Legacy continues!