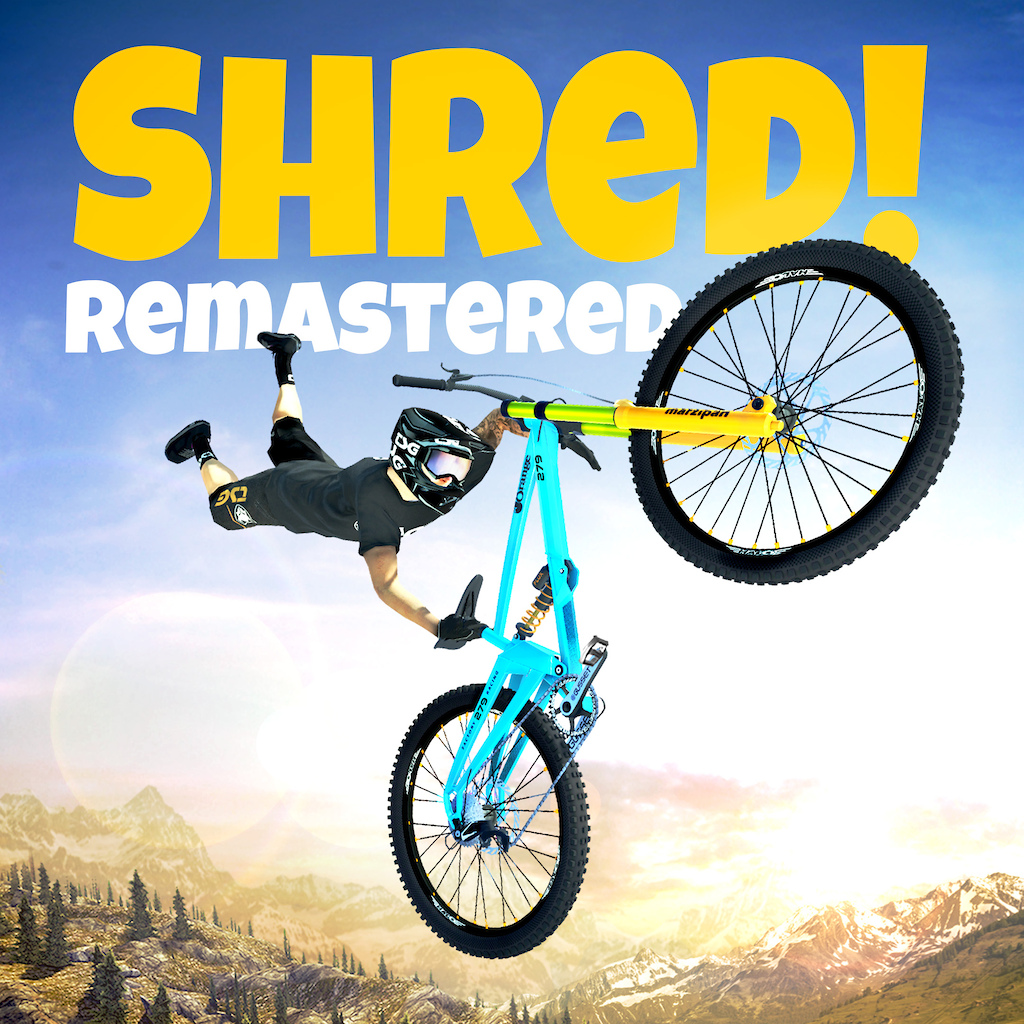 Those who played the original Shred! back in the day, are going to be stoked on Shred! Remastered, a total remake and love letter to the original game brought up to date for modern consoles.

For those who missed the game for the first time it's a great opportunity to experience what (we think) made the original great but without the bugs, dodgy voice acting and janky animation of the original 2014 mobile release!


Once again bust out sick tricks and gnarly combos in over 30 courses inspired by real world locations and mountain bike culture.

In keeping with the ethos of the original, it's a simple game with zero filler, jump right into the action for an instant adrenaline injection ideal for those times when it's just not possible to get out on the trails.

The game is priced at around $6.99 (local tax and currency conversion may vary price slightly) 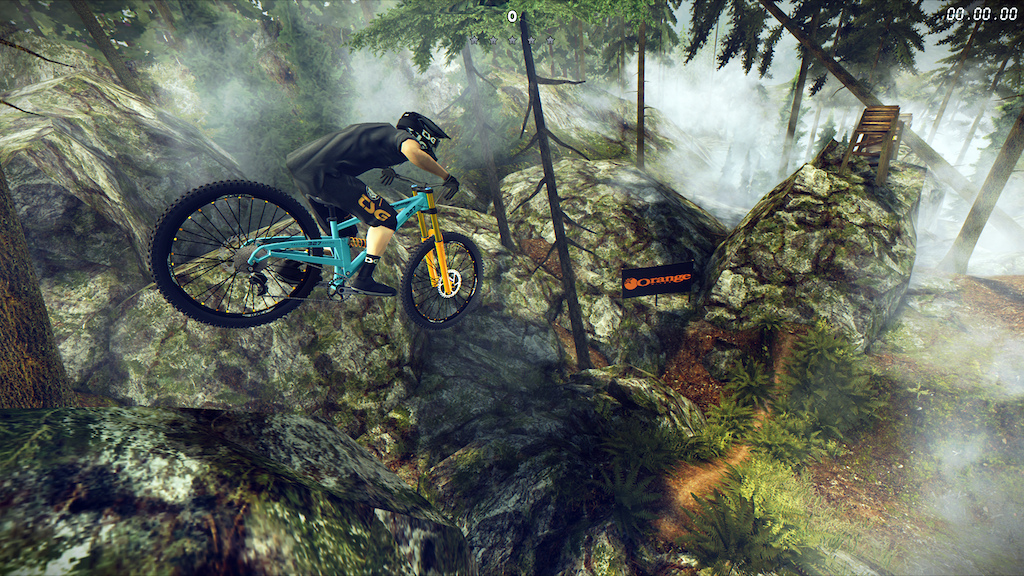 Without Dave, the Shred! games would not exist so as a token of appreciation I've immortalized him in the form of a hidden "Easter Egg"

Find Dave's Easter Egg hidden challenge!
The project initially started as a long overdue update for the original game but early on it became clear that as so much of the game was having to be reworked from scratch we might as well remake the entire game.

We took the ideas, gameplay, and concepts which we loved in the original game and amplified them, at the same time ditching the not so good stuff, of which there was considerable! 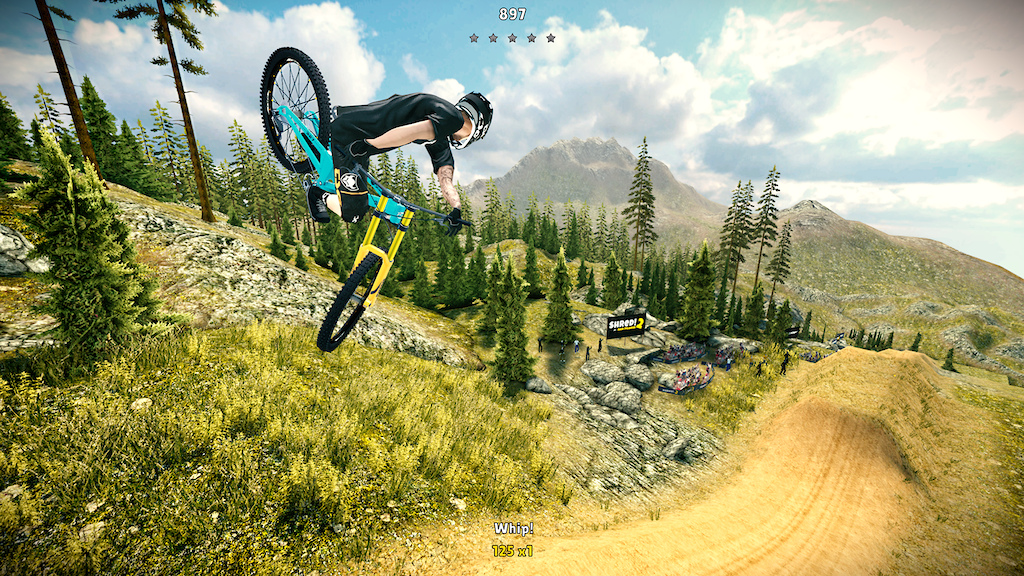 Technically speaking the game is a “total remake” rather than a “remaster”. But “Shred! Remade” didn't quite have the same ring to it!
The Bike

The bike in the original Shred was heavily inspired by an Orange 224, for multiple reasons. Firstly, it was simple having one pivot helped reduce performance overheads and greatly simplified the animation process.

Secondly, I always just liked those bikes - I rode a few and always thought they were really fun to ride with loads of pop on the jumps. The whole “made in britain” thing also suited the project's credentials. 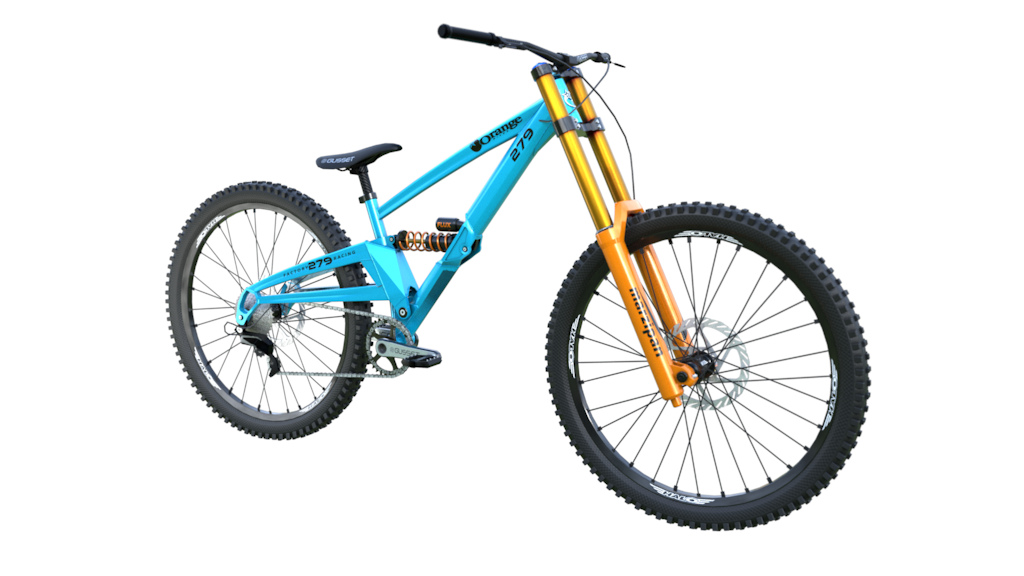 In-game Orange 279
This time though i’m stoked to be able to include the real deal, and as you can see the components and geometry have been somewhat upgraded from the original version: 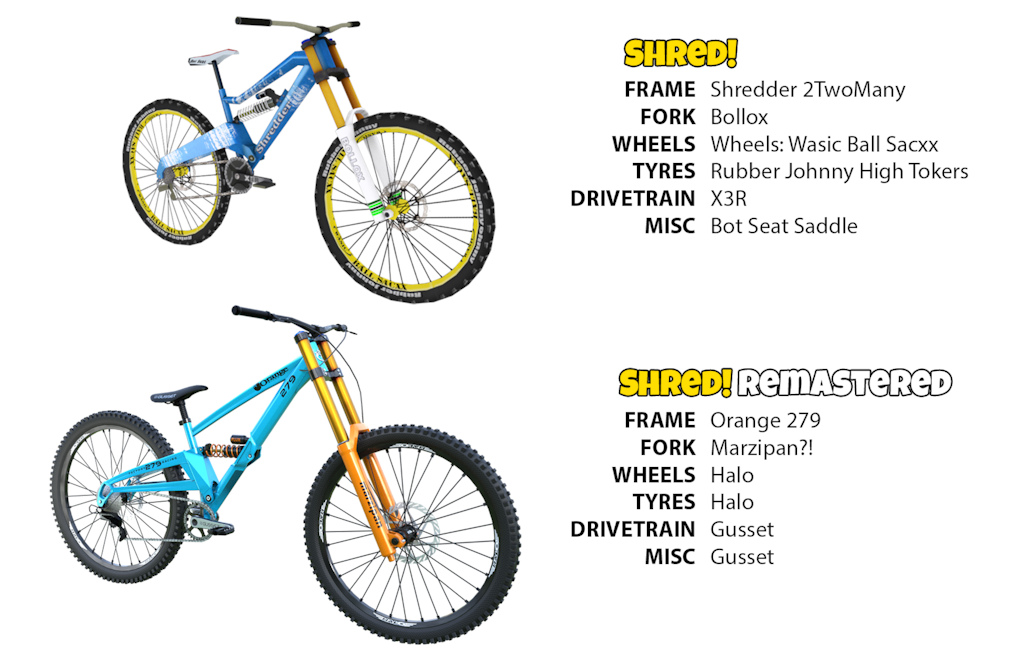 “Bike Dude” is the anonymous star of Shred! Remastered, the most stoked rider in the world and a humorous homage to all the stereotypical bike dudes from MTB culture 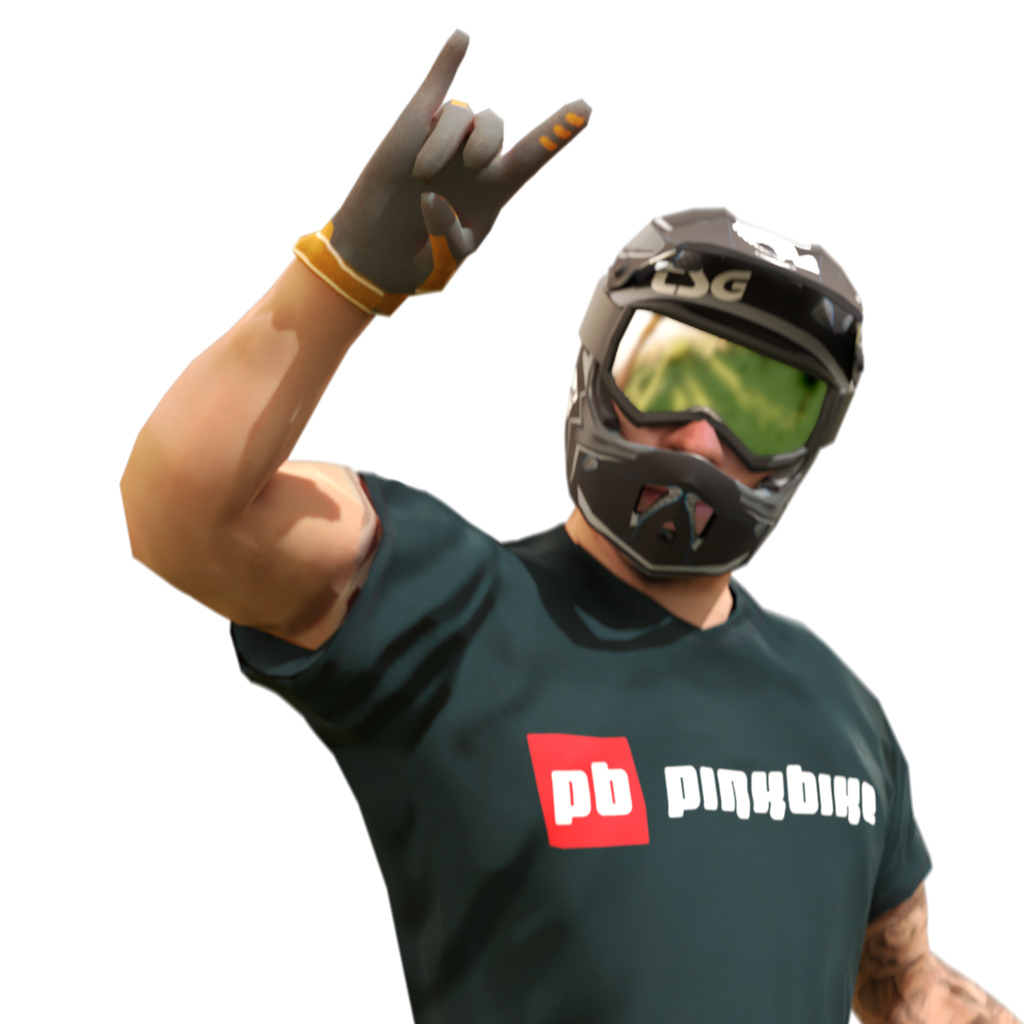 With zero budget the original game had terrible voice acting performed by yours truly, it needed an update so I hired some talent to bring “Bike Dude” to life, with soundbites drawing perticular inspiration from “Drop in TV”, examples include:

“That tranny was tooooootally sniper”
“My riding buddies….they are all angels man”
“Chicks dig fat ankles and big feet”

Even though he has hit his head many times over the years and can be a bit dazed and
abstract, he is just super pumped on the good vibes and doing sick tricks on his mountain bike.

FUN FACT: Behind the full face and goggles its actually a horrifically distorted version of Mike Levys face from "The Grim Donut Game"
Levels and environments

The original games levels were heavily inspired by visits to Whistler, the surrounding BC area and the general UK riding scene. 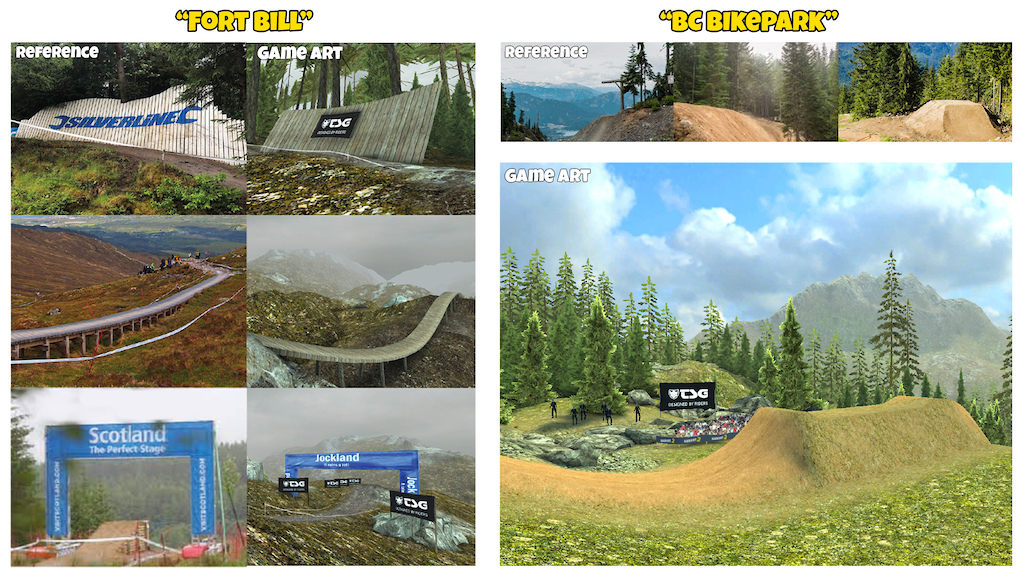 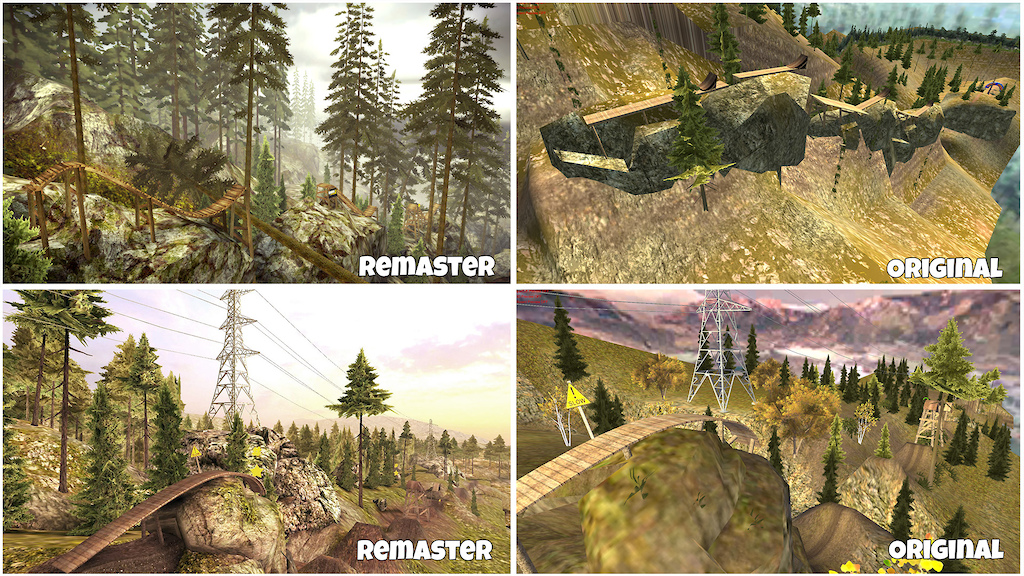 Each level has been totally reworked, while retaining the core concepts and inspiration behind the original
99% of the game is brand new, with every level, challenge, sound effect, art asset being created from scratch. We’ve also got a fresh new soundtrack and voice acting and bike geeks can nerd out over references to MTB culture.

We think there are some great gaming moments in Shred! Remastered and it's been a real passion project to re-imagine our original 2014 title, “Shred! Downhill mountainbiking”.

A massive thanks to all the guys at Orange, Halo, Gusset, Pinkbike and TSG, for getting behind such a grass roots project and helping spread the word.

PS its also on mobile and Steam

wobblegoblin (Aug 19, 2022 at 20:02)
@tropicalnachos: I don’t play video games, but I’m thinking about get a system to play games with my daughter, any suggestions?

Dhsteez (Aug 19, 2022 at 21:23)
@wobblegoblin: just buy a good PC. Can play every game in existence for cheaper than a console. Also, use whatever controller you want as long as its USB. Also then have all the other perks of a nice computer.

BentonFraser (Aug 19, 2022 at 23:26)
@Dhsteez: You have to sit at your pc everytime you want to game then.
Relaxing on sofa playing on TV is soo much better than hunched over a pc.

Agree you get more use generally out of a PC but while games might be cheaper the outlay on a PC to play same level games as even a PS4 is gonna set you back 3 times more initially or you'll run into frustrating problems.

Most consoles double as pretty good media centres- particularly PlayStation but depending how old your daughter is Nintendo might have a wider range of more appropriate games.

bxxer-rider (Aug 21, 2022 at 2:00)
@BentonFraser: not quite true, you can run a pc in living room hooked up to a good TV just as easily. They can be very reliable, fully able to maintain without any of the silly limits consoles place on you. I've run mine in the living room, sat on sofa and gamed. Beats the socks off console any day.

As for pricing, since the crypto crash pricing has fallen as an entire demand area for parts has disappeared. You can pic up a pc that'll destroy all current consoles for not much more then ps5/seriesx.

alexhyland (Aug 21, 2022 at 10:11)
@wobblegoblin: I just got given an Xbox 360 for free. It's great fun, game mechanics haven't come on that much since then, only graphics (and your daughter probably won't care about that). Also games are dirt cheap.

On the other hand, Nintendo switch is ideal as a first console, great for multiplayer games, less so for "hardcore" gaming. Untitled Goose Game ftw!

Deep-Friar (Aug 19, 2022 at 20:14)
Try, lonely mountains: Downhill. While not hyper real it is difficult like skate and requires a bit of skill to get right. Comes the closest to bike simulation so far, even though its extremely cartoony.

mjlee2003 (Aug 19, 2022 at 22:02)
@Deep-Friar: can vouch for lonely mountains downhill. the camera angle is kind of trippy sometimes but overall its pretty sick

a-green (Aug 20, 2022 at 1:14)
@BentonFraser: Riders Republic was the biggest letdown... Descenders is good because you have to practise lines and there are actually consequences for casing or messing up.

haggqvist (Aug 20, 2022 at 1:50)
We need MX Simulator but with pushbikes! Someone handy should contact JLV and get the source code for his physics engine.

vonichi (Aug 20, 2022 at 5:38)
How hard was it to add links to the actual game? I clicked the images and get sent to pinkbike hosted images

theobviousfaker (Aug 21, 2022 at 2:01)
I need that Marzipan fork. Sounds like the most delicious damping ever, also bio-degradable and easy to find replacement-goo in every grocery store.

asbointeractive (Aug 20, 2022 at 7:11)
No trolling intended. Were stolen on having the bike in the game and they've been super helpful in promoting our small business

Lloydmeister (Aug 22, 2022 at 1:48)
Ive wasted hours playing this game. The only thing that gets more eyerolls from the better half is when she hears the marshalls whistles during the DH world cups

Since I can't find a bike in stock that I want, might as well shred Virtually...
Below threshold threads are hidden