I couldn’t be more stoked to announce that my mountain bike game “Shred! 2 ft Sam Pilgrim” is now available for PS4 & PS5!

To celebrate the launch, we've hooked up with the guys at Haibike, Halo Wheels, Pinkbike and TSG to give away an awesome bundle of mountain bike goodies worth £456.98! 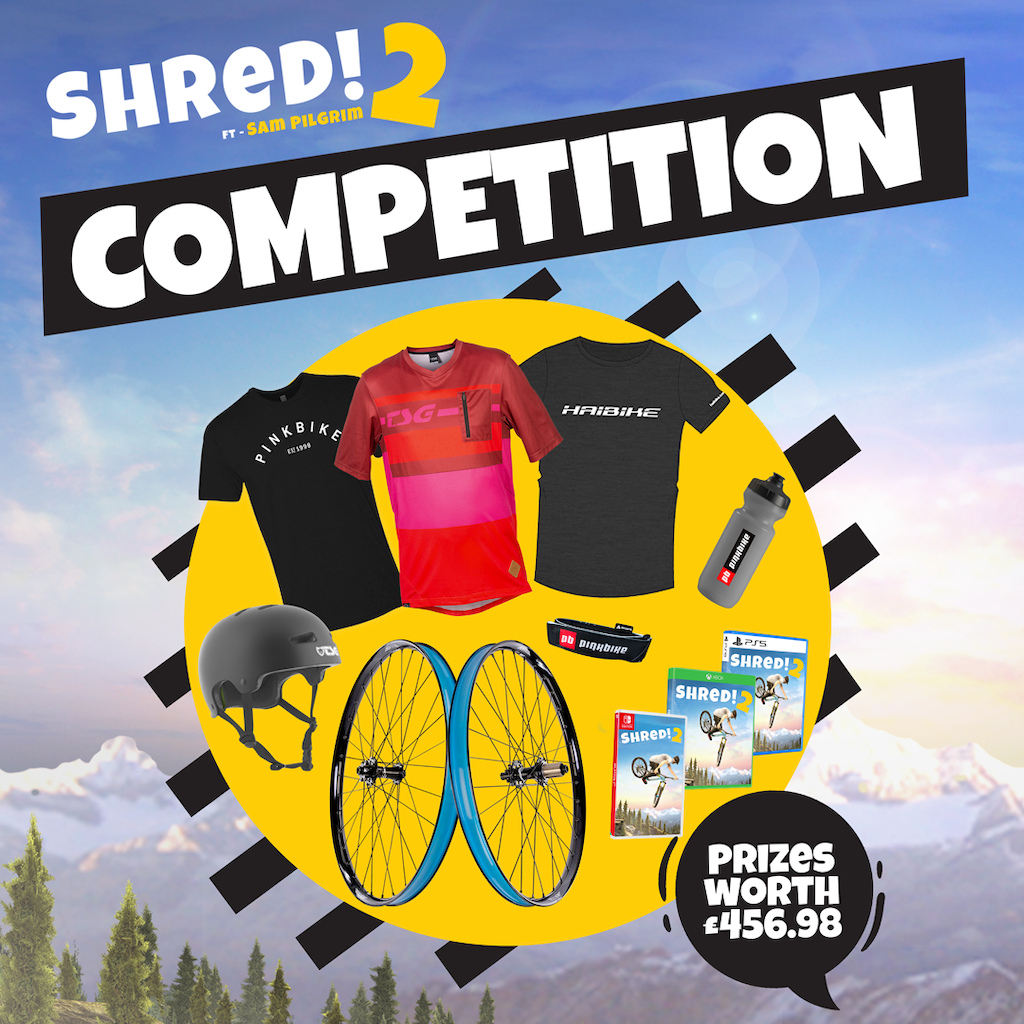 Competition link here >> https://shred2.asbointeractive.com/competition/ The prize draw will launch on our social media platforms and Sam Pilgrim's YouTube channel on the 4th of May and close on the 18th of May 2021.
Shred! 2 is a 100% self-funded project, and puts you in the riding shoes of all-around bike riding legend Sam Pilgrim. Get ready to bust out huge tricks and insane combos in over 40 hand-crafted levels created by me, Alex - a solo developer with a lifelong Mountain Bike obsession. 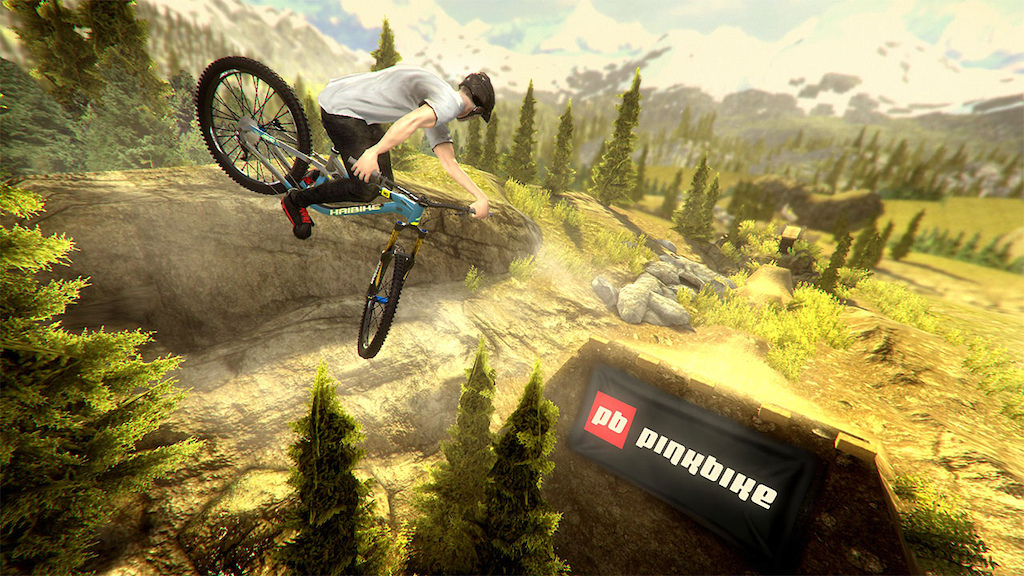 Get it right, and it feels effortless, get it wrong, and you’ll enjoy watching Sam’s ragdoll doppelganger suffer the consequences!
The bike world has always been full of cottage industry - innovative guys in sheds passionately making bespoke products, fulfilling their requirements for something the mass market does not provide. I’d like to think ASBO Interactive is no different - a company of 1 operating out of a converted garage in rural North East England, totally hellbent on creating a videogame that is worthy of our beloved sport. 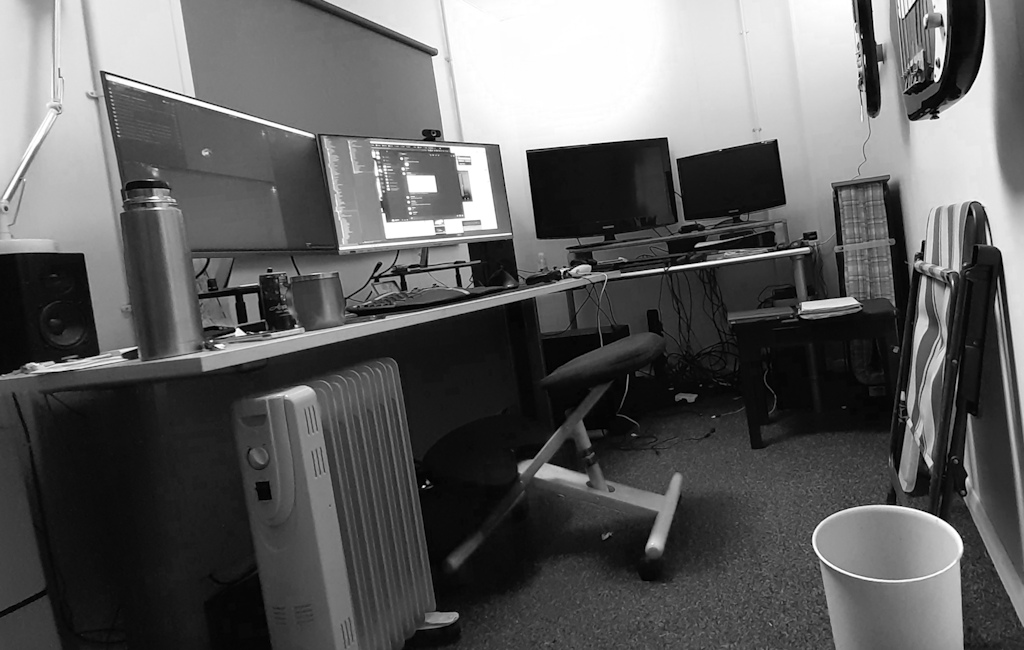 The game was produced using free software Unity and Blender
Thankfully I’m not entirely alone, and when it comes to programming I hire in my old University housemate Dave.

Now while Dave is an awesome programmer, he isn't really a mountain biker. Thankfully, in our previous lives I had subjected him to endlessly watching Sprung 5, New World Disorder and Earthed DVDs so he has a solid foundation of MTB culture! 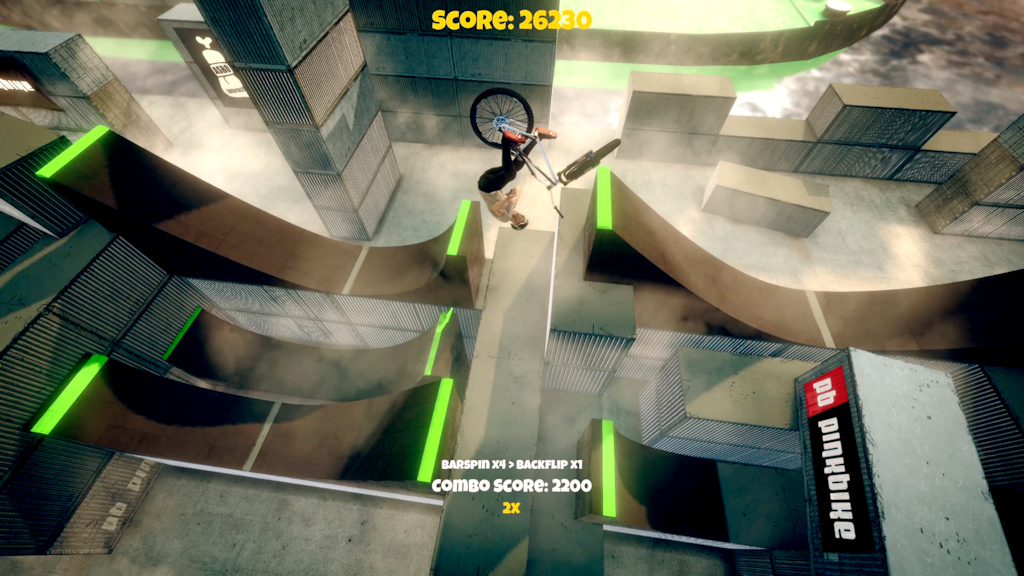 Shred! 2 in itself is a mashup of MTB culture, inspired by real-world riding experience, famous trails, video segments and figure-headed by Sam Pilgrim all condensed into a playable experience. Virtually building and riding insane virtual trail features without being limited by physical constraints or my own bike riding ability has been an absolute blast! 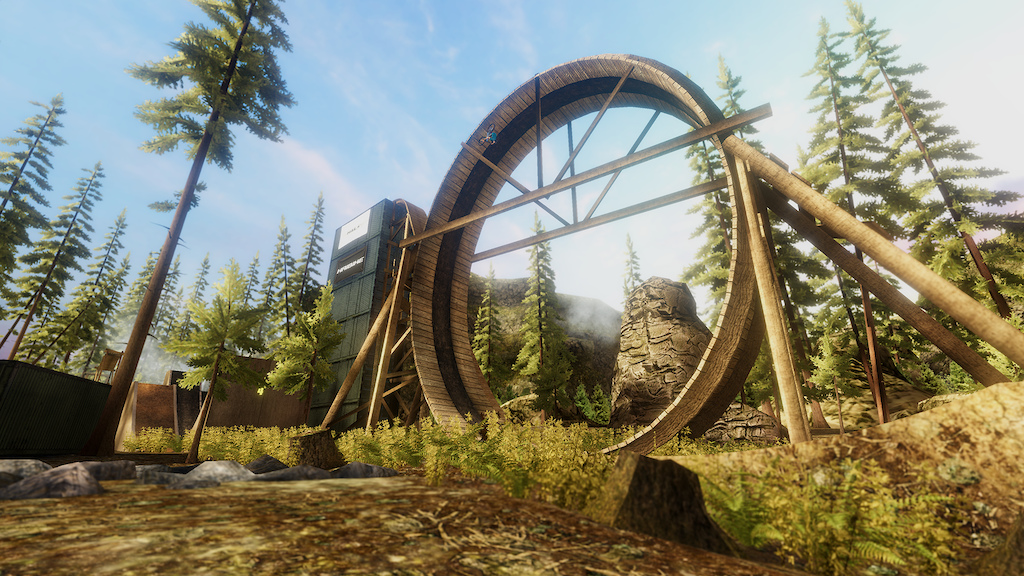 Each one of the trails has been constantly tweaked and refined for maximum flow!

And yes! You can virtually ride the Grim Donut, along with (of course) Sam’s Signature Haibike DRT. There are also a whole host of other playable bikes which like the level design, both parody and take inspiration from both classic and contemporary trends which I hope enthusiasts will identify with. 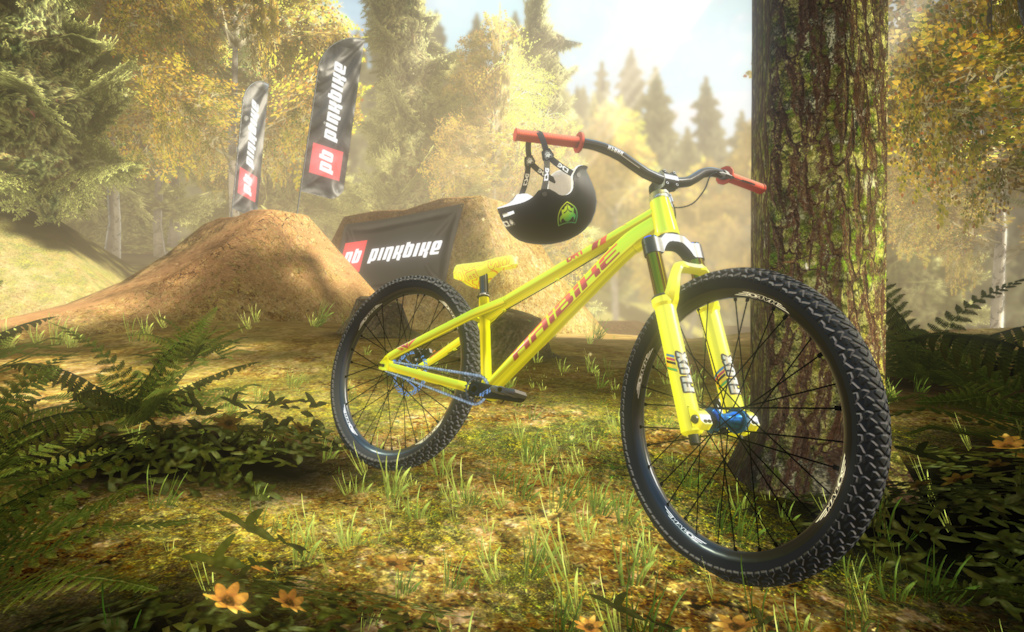 Who doesnt want to ride a singlespeed downhill hardtail with a 56 degree Head Angle?
Much like any industry, bringing a homegrown product to a major marketplace has not been without its difficulties. It’s taken way longer than I initially expected, and the transition from Mobile / PC to Console has been a huge learning curve.

The likes of Sony, Microsoft and Nintendo are understandably very fussy about the type of content they allow on their platforms. These businesses are generally geared up for big corporations with admin, IT, marketing and publishing people. For an independent developer all of that sensible stuff takes away precious time that could be spent developing game content. 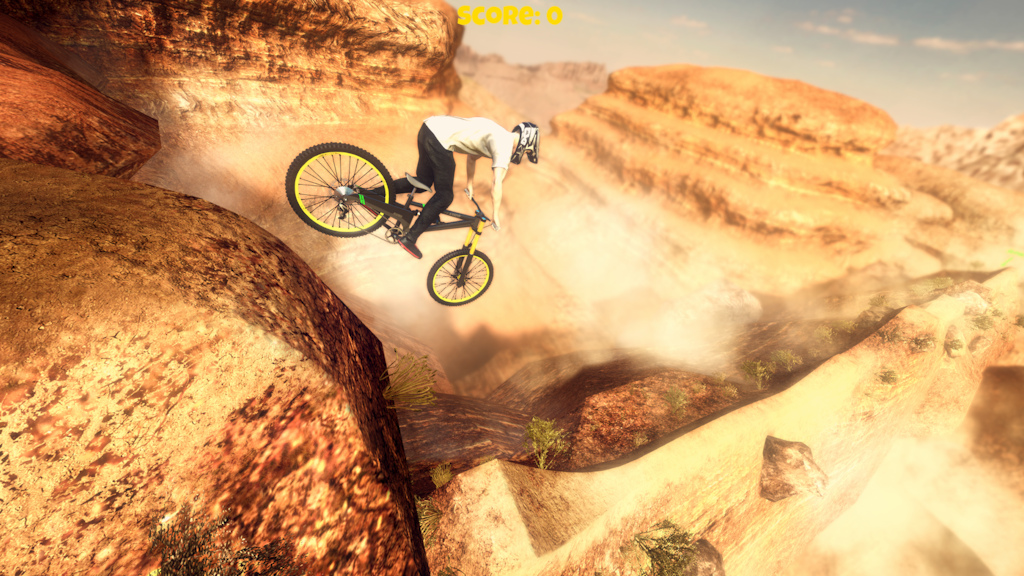 Still, it’s been one hell of a ride and I could not be any more stoked to bring mountain biking to Sony Playstation!

Massive shout out to Sam Pilgrim who since day one, has supported and promoted an absolute grass-roots project. I honestly don't think I'd have made it this far without his input.

Finally to all of the guys at Pinkbike, TSG, Halo and Haibike - it really has been a privilege to collaborate.

TannerValhouli (May 5, 2021 at 11:35)
Do you get to do a mission where you play as sam hill and paint your fork lowers with neon spray paint? and then have to cut the steerer with a chainsaw and a rock?

nemery (May 5, 2021 at 15:39)
I hope Mike Levy is a secret character, un-lockable with a 30 button combination right at the start screen, and you only have about 15 seconds to input the combination before you have to reset the console and try again

What was the real code?

WasatchEnduro (May 5, 2021 at 11:46)
Does the Grim Donut sound like a bucket of bolts tumbling down the mountain or does this version have STFU and TITs cable routing?

MuddyBrit (May 5, 2021 at 16:01)
Which is all fine but you can't even play it because none of the bikes are available til 2023! grumble grumble ... everything's awful.... etc and so on..... Sorry. I just felt I had to keep up the habit of every PB comment section having at least one comment complaining about stock shortages.....

30-punk-cue-ball (May 6, 2021 at 11:44)
Didn't know this existed until today, which prompted an IMMEDIATE digital purchase for the Switch platform. The gameplay is eerily reminiscent of the PS1 & PS2 Dave Mirra games, both of which are not easy to find these days. Looking forward to getting home after work today to get this game loaded so I can Shred from my couch!

Follow-up question will it be shipping sooner than the grim donut I have on order?

Linc (May 5, 2021 at 19:42)
Would love to see a game that focusses on picking lines in tech corners, rock gardens etc. You know, actual MTB. Hucking and spinning around off cliffs just makes the game play like pretty much every other ski/snowboard/moto/driving/carting game.

Mcbellamy (May 6, 2021 at 15:15)
Congratulations, great game! Will there be any support for Android Mobile gamepads such as the Razer Kishi?

asbointeractive (May 7, 2021 at 0:48)
Thanks man, the android version supports gamepad tho ive not tested with that exact model

Mcbellamy (May 7, 2021 at 14:16)
@asbointeractive: I have just tried it successfully with the Mantis Gamepad keymapper.

Venturebikes (May 7, 2021 at 13:34)
Mad respect. Blender is great for learning basics in *high school* design classes, but I couldn't imagine running an entire game design off it. Thats a serious commitment

pdxjeremy (May 5, 2021 at 11:51)
So if Sony gets Sam pilgrim, who does Microsoft get?
Everyone else right?
I wanna play Mcgazza and Lunn

asbointeractive (May 5, 2021 at 12:44)
Game is also out on Microsoft Xbox dude. There are are a few McGazza Tribute Easter eggs in the game too!

add1cted (May 6, 2021 at 13:19)
Dunno why any developer would waste there time making an on rails biking game. Honestly boring asf. Gotta get that mobile game store cash tho.

asbointeractive (May 6, 2021 at 1:31)
@deepstrut: Yeah this is pretty much right. We could have targeted high end PC and had loads of fancy lighting, effects and super high res models but that would have severely limited the audience. Even a game as simple as this took a ton of optimisation to get it to run at a steady 1080p 60fps on Xbox One. Big companies like EA / Ubisoft etc manage amazing looking games but they have dedicated optimisation specialists and budgets in the tens of millions.

krispeuf (May 6, 2021 at 15:20)
@asbointeractive: Congrats on the launch, must have been fun dealing with all the different TRCs..
Curious what base engine did you use ?

Also another perspective on TrevZ's question: the answer is Budget.
I work in a medium sized studio. A whole 100 person team have been working mostly on optimizing a game for launch on lower end platforms for the last couple of years.. An independent studio just can't afford to spend all that money.
Also the games released on the best hardware right now are extremely detailed.. it takes a LOT of time to make content that has just the right amount of details to look realistic without killing the perf. Someone has to make those millions of vertices and high res textures that you enjoy seeing.

asbointeractive (May 7, 2021 at 0:50)
@krispeuf: Hey mate, yeah getting the game through certification on all of the consoles was a serious challenge. The game is made using Unity 2018
Below threshold threads are hidden

rosemarywheel (May 5, 2021 at 18:14)
Not sure whether to be disappointed or not that so many peeps are into this. It seems like most would dislike this even more than E-Bikes...

But I suppose if you are going to play video games at all, they may as well be Steezy MTB ones

dsheffer (May 5, 2021 at 21:02)
people are into this sorta thing? bmx games from 15+ years ago are better than this. This is spam pb news go ride your bike and get off the couch

Ironchefjon (May 5, 2021 at 12:16)
lol for real. Snowboarding had cool boarders and SSX and STEEP. skates got the tony hawk games and the SKATE franchise which both kick ass. Give MTB some love! a proper downhill domination sequel !

Shred is good for level progression. You start a new one and think how the hell can I do those objectives but after trying a few times it clicks.
For me it just ramps up too much in the later levels and gets boring with the silly skate park maps.