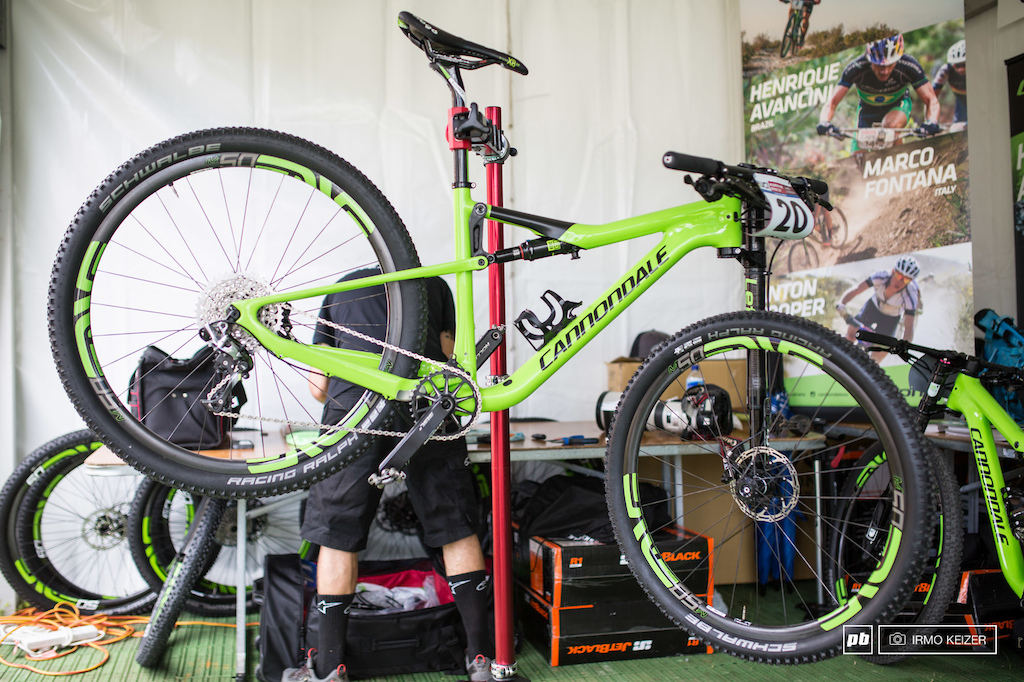 The Cannondale Factory Racing Team brought a new weapon to the rumble in the jungle in Cairns. I wanted to brandish the bike with the word prototype but taking a closer look shows a bike that could well be ready for production line, if not something ready to land on the shop floor. 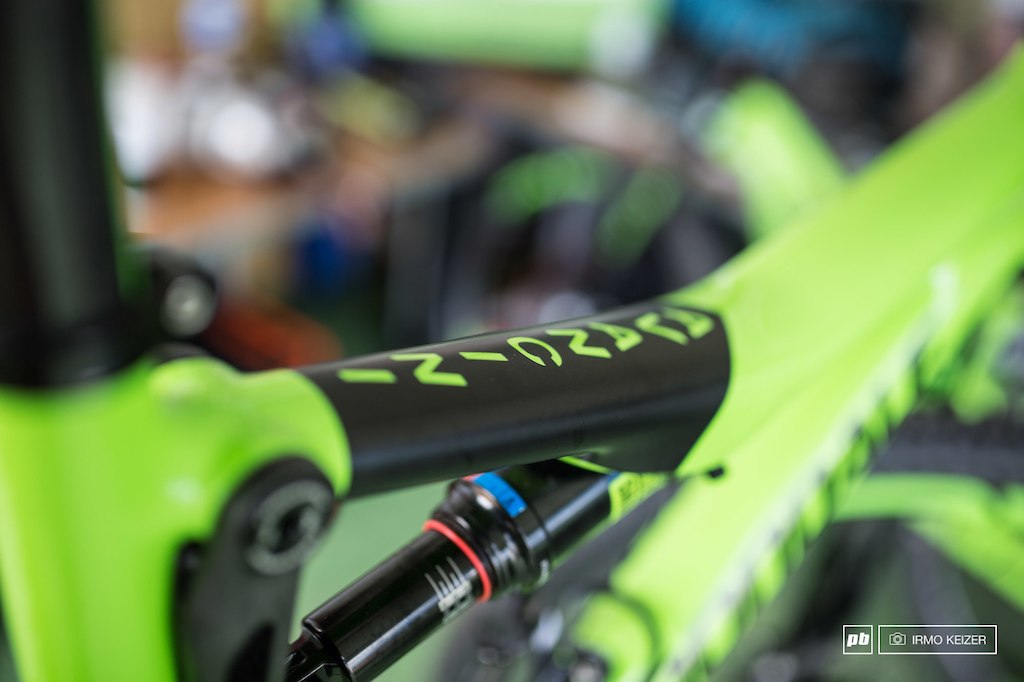 We can only assume this bike will continue to be badged with the 'Scalpel' moniker and shares a similar look to its predecessor. Likely 100mm travel at the rear with a Commencal-esque shock mount that partially covers the RockShox damper under the top-tube. We can't see from Irmo's sneaky shots whether or not the bike uses some kind of travel adjust system like on the longer travel Jekyll, Trigger or Habit chassis, but if there was a cable or hose concealed in the top-tube I wouldn't be surprised. I also wouldn't be surprised to see this bike sporting a slightly slacker head angle and Cannondale's Lefty fork with a huge 55mm offset as found on their F-SI hardtail. 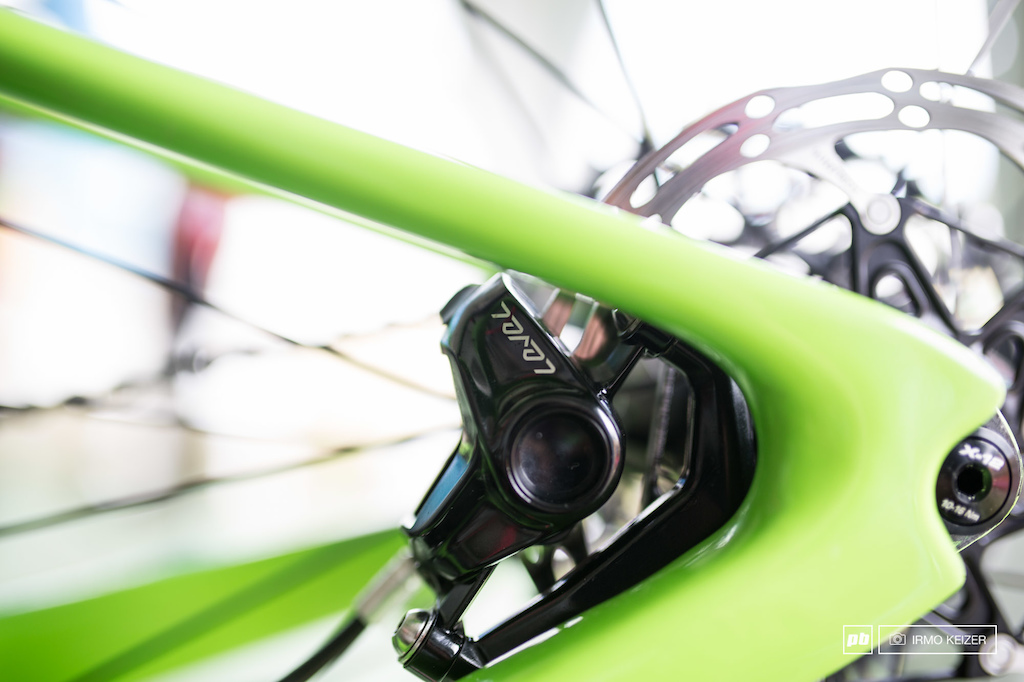 SRAM's new Level brake is neatly tucked away behind the end of the pivot-less carbon swingarm. Like the old Scalpel, there will be an amount of flex in this area to allow the suspension to compress. Engineering flex into the frame means losing a pivot and the maintenance and weight that goes along with it. 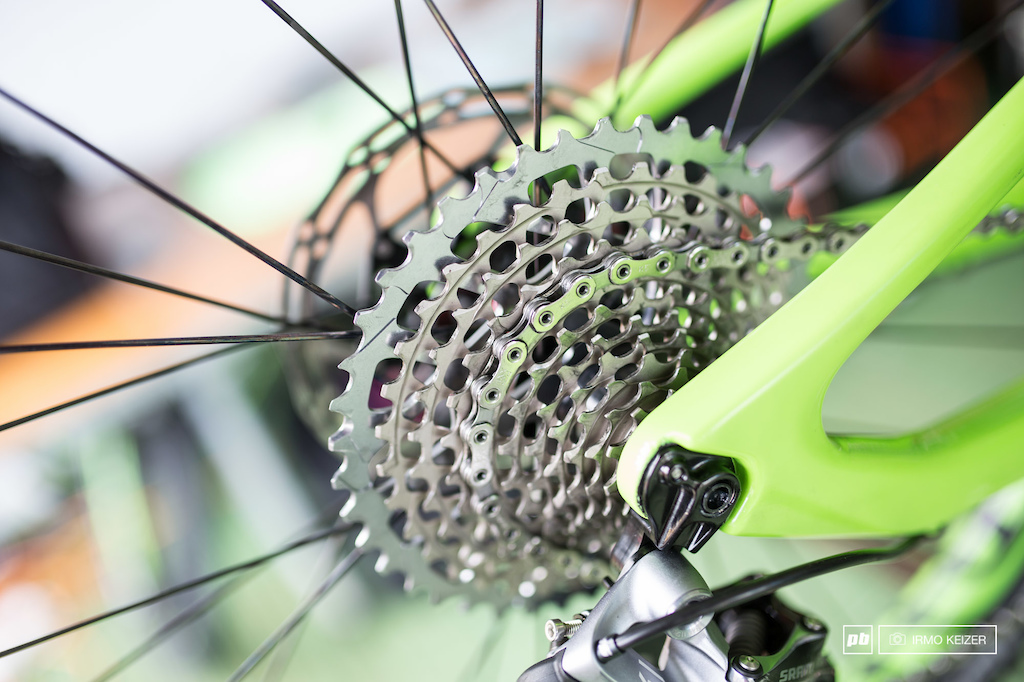 Cannondale's F-SI hardtail XC-racer uses their 'Asymmetric Innovation' offset rear end. The brand claims that using an off-set swingarm which moves the hub across by 6mm means they can gain the chainline, tire clearance and spoke angle benefits of a boost hub, while sticking with the 142mm width hub standard, it's likely that this new frame will feature the same offset. 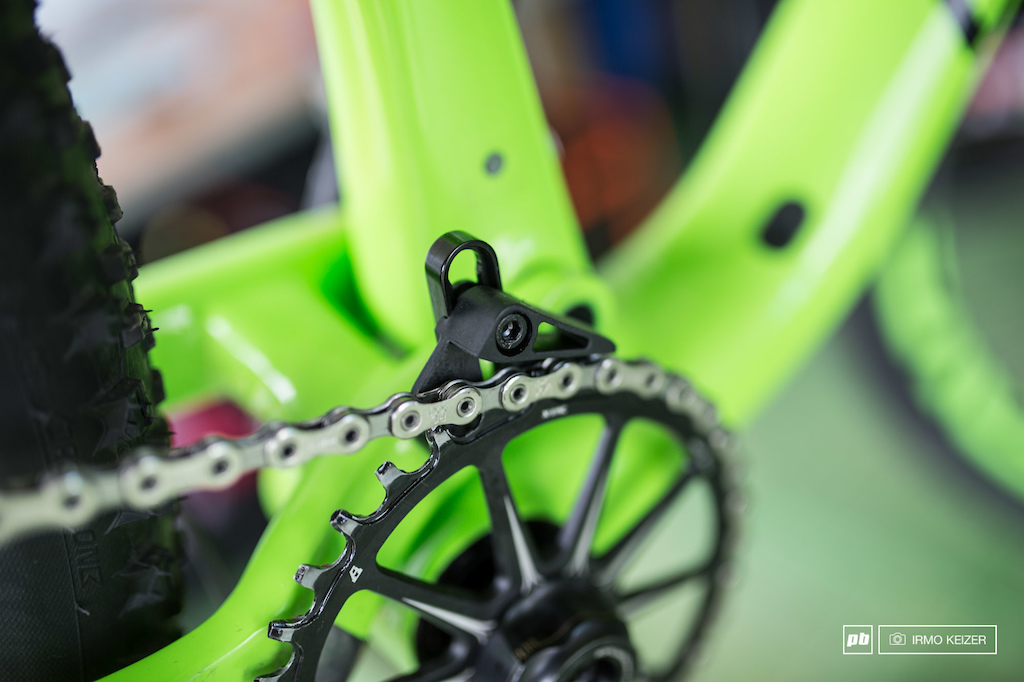 XC racers love to shave as many grams as possible, but Avancini still chooses a small top guide to keep the chain in place. Dropping a chain during a race will cost more time than any weight saving could ever cut down. 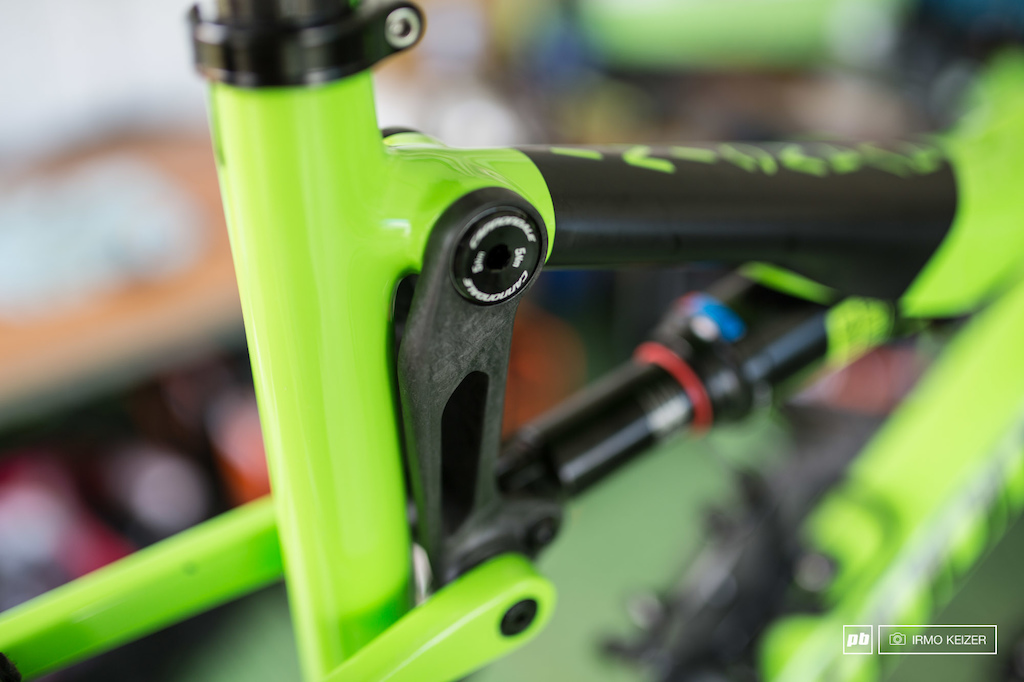 Twallywilly (Apr 25, 2016 at 10:12)
What I meant by that first comment is that most people ride leftys for one ride at a bike demo then draw conclusions as to whether or not they liked it. When you take the time to set it up and tune it perfectly then it's one of the best options around.

ericolsen (Apr 25, 2016 at 12:06)
@ekho: solo air is the air spring not the damper. The damper is also made by rockshox specifically for the lefty but only has rebound adjustment and lockout.

grim007 (Apr 26, 2016 at 1:30)
my impression about the lefty is that its very unreliable.
ive been to a 3 day desert stage rage (marathon) on hard terrain and several guys had the lefty lock up on them and had to be serviced in the end of the race, and pretty much everyone with a scalpel told me its a great fork but unreliable and has to be serviced often

preach (Apr 26, 2016 at 5:30)
The reason the lefty is a "lefty" is because Cannondale has always gone the proprietary route. If the single leg/stanchion design was actually superior why doesn't any (and I mean any...) bike, motorcycle, scooter company use it? (Especially in a copycat industry like the one they are in?)

homerjm (Apr 27, 2016 at 8:03)
@grim007: Yep I think the same. Maybe it was one of the best options in performance but I see various lefty forks going to repair,one of them I remember,the black cover(dlc coating) of the bar was totally worm out...Maybe was fault of his owner to ride that fork in bad conditions. All Cad bikes has is own peculiarities, you love or hate them. I love my jekyll and his own character compared to more regular bikes.

grim007 (Apr 25, 2016 at 6:30)
another good thing about the new scalpel is the ability to carry 2 water bottles inside the frame, it can be seen from pictures from cape epic

sevensixtwo (Apr 25, 2016 at 8:29)
Such an incredible upside. Not just for time on the bike, also in transport: underside bottle cages have to be removed in order to fit on most roof racks.

johnanderson (Apr 25, 2016 at 8:43)
I've been riding a lefty supermax for about 2 years now. The fork is incredible. I've never had a single issue. The fork is very stiff. I have bent my front wheel many times but the fork remains perfect. I do a lot of DH and enduro. that being said i cracked my carbon Trigger two times in one year. Cannandale carbon frames are not very strong. Maybe because these frames are so light. Also, the chain stays are not designed for a 1x11 drive trains systems so the chain alignment is not perfect. cannondale pivot designs need much improvement. There pivots are behind the times.

yeah...i can't believe how cheap cannondale frames are. like i said i cracked it twice already in a little over one year. getting rid of bike.

alexsin (Apr 25, 2016 at 9:09)
Just how many people are doing maintenance work on their horst link pivots and how often?

Hektor1 (Apr 25, 2016 at 10:13)
I ride as an Ambassador for Cannondale. The forks are better than anything I have ever ridden. This includes the Pike. The setup is important, Setting up the correct sag for your weight (20%).will make all the difference in the world. Check the pressure often. For some reason it can lose air based on weather (colder). Regarding the frame (I own a Jekyll) it is tough as nails. The person riding the trigger may have been doing too much with a bike not intended for the type of riding he is engaging in. I've been to Whistler and put that bike to the test.

unacceptable for a standard fork

even moreso with a lefty

mistermtb (Apr 25, 2016 at 11:41)
I ride a Jekyll and have spent time on the Lefty Supermax and the Pike and in my opinion, even the RC Pike out rides the Lefty for that application. The damping and trail feel are just better in my opinion. On my hardtail, I love my Lefty. But I think the Pike is a better fork.

Jimmy0 (Apr 25, 2016 at 12:05)
How's the durability for the lefty? I've heard it's abysmal but never owned one.
Also ive run into the cold weather psi change on a pike and dorado. Could be wrong but I think it might have to do with the air condensing inside, so whenever I change elevation or temperature I cycle the air and it seems to be much better

hellanorcal (Apr 25, 2016 at 12:13)
@Jimmy0: If you are concerned about the air condensing inside, which is a very real possibility, just use nitrogen. It is more and more available now-in-days.

wingguy (Apr 25, 2016 at 13:06)
@jaycubzz: If he rides as an ambassador for Cannondale I would imagine that he has ridden more than 1 Lefty fork, therefore he can speak to the quality of the forks plural that he has ridden, right?

Anyway - changes in ambient air pressure will affect the spring pressure of any air fork or shock, but the smaller the working sag range of the unit the greater the change in feel for the rider.

johnanderson (Apr 25, 2016 at 14:06)
thanx for the reply. I ride a carbon 2, 29er model 2015. I don't agree with you that the cannondale frames are tough. My Trigger is 130mm travel. I push is hard on some downhills over some rock gardens and small drops about 3 to 5 feet. I never really bottom out on my rear suspension. And i have cracked the frames two times. I have also seen many models of cannondale frames crack especially in the chain stay area. The simple reason for the cracking is the grade of fiber is too light unlike intense which uses a heaver fiber but much stronger. Also, the main pivot has a bad design.

johnanderson (Apr 25, 2016 at 14:08)
own a supermax for two years. The durability is incredible. Do a lot of DH and enduro and never do anything to the fork and it's perfect.

but really I'm just being douchey

thumsup (Apr 25, 2016 at 16:06)
@Jimmy0: Other stuff in air, like water vapor, can and will condense under the right conditions. Nitrogen also leaks from seals slower than air does

Jimmy0 (Apr 25, 2016 at 23:01)
@LeDuke: ya it was, the air we breathe is made up of mostly nitrogen, I was unaware of the different properties of nitrogen and water vapor in regards to fork pressure. Thank you @thumsup

atrokz (Apr 26, 2016 at 5:57)
Cannondale should start naming their lefties after lefty world leaders. The Stalin. the Mao. The Tom Muclair. All great in theory but all poor performers in comparison to their centered counterparts....

(yes I've ridden several, used to mech for a dealer)

johnanderson (Apr 25, 2016 at 14:12)
The worst part about cannondale is terrible customer service. You can't even call up cannonadle with technical questions unless you are a dealer. Who wants this.

mudmandhbrazil (Apr 25, 2016 at 7:20)
Bike looks very light. Henrique is a big hope for a Brazilian medal in the XCO of Rio de Janeiro.

KevinKNZL (Apr 26, 2016 at 2:17)
My daughter rides my old flash with a carbon lefty. The fork does the strangest thing when left over night. All air seems to leaked out and the fork collapsed to full travel, cycle the fork a few times and the pressure jumps back up. In our bike and bike part collection there are two Leftys in use and two fox forks with worn uppers, so the Leftys are winning the reliability stakes. Mind you I can pull a fox apart and do a service but not the Leftys

chronsbons (Apr 25, 2016 at 9:41)
you can see dual lockout hoses on the bike that is in the background of the leading image.

zombizilla (Apr 25, 2016 at 11:03)
Nice bike,just wish Cannondale would make a dh bike again.currently i ride a perp and love it.i like all dales

The fork or the chain guide?

steviestokes (Apr 25, 2016 at 7:07)
Disagree! Remember the huge XC Pit photo epics at the world champs over the years? Watching the mechanics ability to shave off even more grams for the most marginal gain is a treat for the eye IMO!