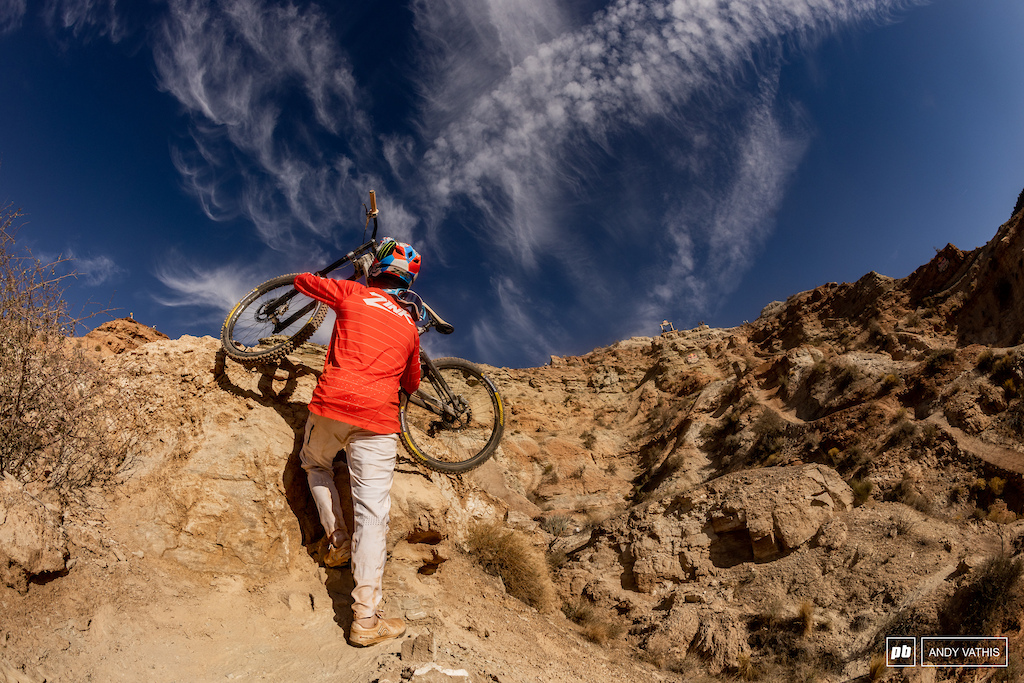 Zink and his team called an audible last night.

Last second news from the hill!


1. Dylan Stark got back on the bike yesterday and hit the canyon gap for the first time. He ended up throwing a tuck on it, and continued to link up his line throughout the day.

2. A lot of lines weren't finished as diggers worked by phone light to push to the finish. Someone get these people headlamps!

4. Cam Zink, who shared Kyle's line, had not hit the Oakley drop by the end of the day, and decided to change lines at the bottom of his run. He's not hitting Oakley Sender, instead going left joining Lacogedguy & Brandt.

5. Brandon Semenuk's drop in was super casual. He walked up with a big crowd at the top and dropped in quickly.

6. William Robert and Szymon Godziek did top to bottom runs by the end of the day. Szymon looking super comfy but thinking about some tricks to throw on his massive features. Will's team has been working so fast and diligently all week, and it shows with a finished line.

7. Both Alex Volokhov and Kurt Sorge went too deep on their first hits on shared massive jump off the mid road. Both got up and walked away, and Kurt cleared the never-before-hit feature shortly after. Alex looks unlikely to start, unfortunately. Gutted for Alex if he isn't able to make the start, he's been here so many times as a digger and was so excited to compete.

labrinsky (Oct 21, 2022 at 11:30)
420: The fridge and couch find psilocybin mushrooms and reach enlightenment, successfully achieving what many spend their lives pursuing

lewis277 (Oct 21, 2022 at 11:44)
@tomfoolerybackground: Luke 4: 12
And the fridge looked up at the pan dimensional beings and said, "show us your ways, and let the beer and couch move your lands freely to find the rampage viewers"

westcoastatheart (Oct 21, 2022 at 9:20)
Really really hoping that Alex Volokhov manages to drop-in and participate...would be so gutted for him!

C4coach (Oct 21, 2022 at 9:22)
Time for a format revamp. Not enough time for prep. You can hear it in their voices and the results are unfinished builds and nervous riders. Extra day? Bigger build teams? Those 2 seem simple enough?

loosegoat (Oct 21, 2022 at 9:41)
I feel like a rest day for the riders would be good too. Seems like digging all week then frantically Guinea pigging lines is a recipe for disaster

lwkwafi (Oct 21, 2022 at 9:45)
I mean, those are some of the constraints of the contest that end up making it interesting. They are pushing themselves and sometimes they underestimate the time it will take to build.

And they do have a mandatory rest day. From Redbull "Rider and dig team get four days to start building their lines and just dig. There is then a day off to rest for everyone. After the day off, riders are allowed to practice their chosen line over a four day period, where they are also allowed to continue to work and dig on it."

lepigpen (Oct 21, 2022 at 12:16)
Seriously. This needs to be at the top. I think crews who were there last year may have been spoiled with excellent dirt and forgot how awful digging Rampage is when it's just the baking sun and everyone is probably vying for the hose. Also that it's an older dig site. Also that the features keep getting bigger and bigger. Slope-page or not, if its worth doin its worth doin right. If dudes are intending to do flip whips on a cliff jump or whatever... I want them to get it to a point where they feel safe doing so. Not eek out a rideable lip and send it into a sand landing or whatever.

labrinsky (Oct 21, 2022 at 9:18)
It feels like everything is coming down to the wire this year. So many people still haven't linked up their lines by finals day. Today is going to be interesting!

loosegoat (Oct 21, 2022 at 9:37)
@Neechy: you can’t go as big as they are with out prep, that dirt will eat you alive. Add tricks on top of that and no one would be landing. I love raw free ride too, but the massive tricks, sniper landings and steep lines are also super cool. At the end of the day it’s about stoke on 2 wheels

suspended-flesh (Oct 21, 2022 at 9:43)
@bradsbikesco: There are better ways, but DL the Opera browser free version. Click the VPN button to the left of the address bar and select Europe. Watch Rampage. Delete the browser afterwards - Chinese-owned.

labrinsky (Oct 21, 2022 at 9:57)
@bradsbikesco: open an incognito window. Your browser saves cookies so if you are using a normal windows it will show that you are in the US based upon your past history on the site.

Red Bull had them on ESPN+ in the USA this year.

Benjamin97 (Oct 21, 2022 at 13:22)
you have capitalism in your country you should be pleased that you must pay for everything

simonusedtoskate (Oct 21, 2022 at 13:21)
Because you haven’t put enough effort into understanding how to make that goal a reality.