Last year we put out a web video called “Can You Freeride a 29er?” which got passed around pretty well and generated a lot of discussion. Since then we’ve seen a massive paradigm shift in terms of people’s attitudes towards 29ers, especially in the all-mountain/enduro segment of the population. And yeah, the bikes are a ton better as well. 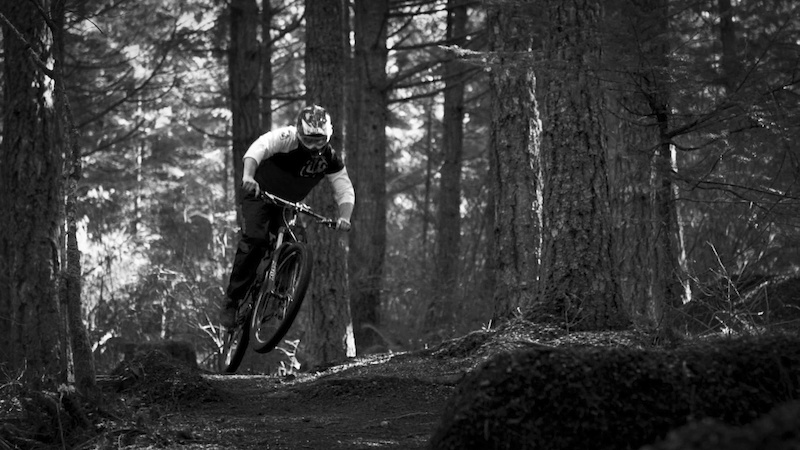 Niner Bicycles liked the last video and sent a WFO9 over for us to put through its paces. Andrew Sherry & Geoff Pendrel from Oak Bay Bicycles put in a solid amount of saddle-time, and came away pretty impressed.

For the film shoot we shot Geoff at Hartland in some pretty nasty conditions. While the bike wasn’t as fast as the full-blown XC bikes that excel at Hartland, it climbed surprisingly well. Andrew then took the bike out to Tzouhalem and some local bigger-bike lines to see how the bike did in the air. 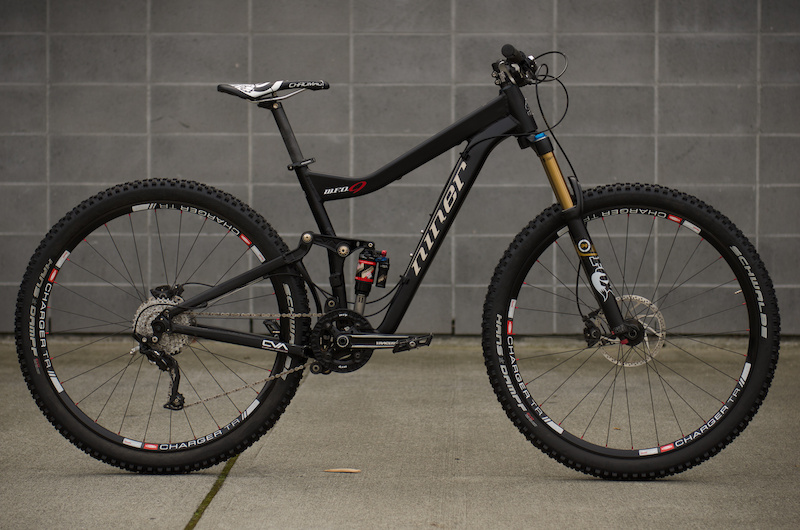 What do you think? Will the current breed of long-travel 29ers be the answer for folks who want a do-it-all bike?

The question is, how do you like to ride and what makes it the most fun? For me, it is just having 'a decent bike' to actually ride and then, 'being able to actually get out and ride'.

grantprezence (Jun 18, 2012 at 17:36)
agree more than anything... If I could live in whistler, or the like, I'd trade my awesome bike in a second for something much less capable.

I agree with your philosophy. Ride what you want to ride (while also letting other people ride what they want to ride).

Protour (Jun 19, 2012 at 12:38)
Sucks for them they named the company Niner and now everyone is figuring out that 650b is superior and way more fun than the big wheels.

jasit (Jun 18, 2012 at 18:28)
I have strong opinions of things I know little about. When in doubt make sure you look cool. What a bike rides like is irrelevant

BDKR (Jun 19, 2012 at 7:10)
A 26" setup for FR and DH will still remain superior. What everyone knows from cars and motorcycles is that more unsprung weight is bad. The suspension has to do more work to keep larger/heavier wheels on the ground then smaller. And of course, there is no traction if the wheel is in the air.

Why don't 29er evangelists ever talk about this?

Of course, you'll want to make wheels and tires as light as possible without sacrificing strength. That said, I'm willing to bet that at out current level of technology (materials and manufacturing processes), and everything being equal, we still can't make a 29" setup as strong as a 26" AND STILL have enough of a weights saving over the 26" to overcome the disadvantage of additional unsprung weight.

Now I'm not saying that 29s suck. As a matter of fact, I can understand their claims and can seem them as having advantage for XC riding, but I'm not convinced for a dead serious aggressive DH, FR, or AM rider.

brianpark Mod (Jun 19, 2012 at 10:17)
Yeah the point isn't that they're better for freeride/dh/am, the point is that it doesn't hold you back too much and gets you a lot of advantages on the XC parts... so, for a do-it-all bike it shouldn't be discounted.

I personally am into DH, AM, and Super D racing. For my style of riding, the benefits of a 29er do not out weight it's drawbacks.

tdryan242 (Jun 18, 2012 at 23:25)
im a very open person but also sceptical, i havnt jumped on the wagon wheel band wagon yet but im not opposed to it. As a freeride and downhill rider primarliy,i will wait until i see success of 29 inch in WC downhill before i try 29 for myself

dtc81 (Jun 19, 2012 at 7:58)
i got a chance to demo one of these a month ago at my local trails and it completely changed the way I view 29ers. I am still preferential to 26, but this was one sweet machine. If I were in the market for a "do it all" bike this would be one of my top choices.

trailstar2danman (Jun 19, 2012 at 6:00)
why do we always see PRO riders trying to sell US 29ere, look what i can do on this bike , it's the best bike ever, blah blah blah, i'd like to local riders try to launch 29ere around there local trail, every single 29 i've never leave the ground, that why they get good traction. Bring it to Crankworks I DARE YOU!

“If you like big rocks and are the type of rider that would rather plow through or muscle through an obstacle than go around it, the W.F.O. 9 is pretty much ideal for you.”

I find that very revealing.

Zoef (Jun 18, 2012 at 23:14)
My WFO is set up with Flow rims and these came of my RIP which I rode for 2 years. So the rims have done 3 years, most of it was hard core all-mountain riding and they are still in good shape. The only minus I can find is steep & tight switchbacks, an WFO in size L is more difficult to get around...however I would not go back to 26er for that.

I love my WFO...it shreds like crazy and it is rock solid!

exrcyst (Jun 19, 2012 at 0:58)
I haven't had any complaints with my WFO except I need to switch to a small frame. If you haven't tried one, they're pretty fun and definitely a good 1-bike. Can build it closer to XC or closer to DH depending on your riding style. I didn't have as much fun when I had it light, so I went heavy and now it's my go to bike.

Grego818 (Jun 19, 2012 at 10:19)
I got my WFO9 to see what all the 29er hype was about. I feel like a 400lb bouncer when I ride it. Everything moves out of the way as I shove through rock gardens and muddy terrain with ease. Tight techy lines no longer exist. Its kind of like cheating but sure is a lot of fun. Takes less out of you too so you can ride longer. I love my 26er though for speed and handling, but for drops and jumps, WFO can handle all I can so far.

omendelovitz (Jun 19, 2012 at 12:22)
I happen to have this bike, and have modded it from stock to look like the above, or close to it. That said, it doesn't weave as nicely as a 26er, but man, it rocks the rocks completely! Can easily handle any FR and most DH thrown at it!

Trls63 (Jun 19, 2012 at 13:00)
Nothing more than physics, a 29" wheel will roll over more stuff comfortably hence great for xc, enduro, etc. but in DH and DH freeride it is a higher center of gravity, to lower the cg it would have to be way longer and either way not so "flickable" . I think they are way cool, but then again I think anything with two wheels and pedals (along with their riders) are way cool.

dfiler (Jun 19, 2012 at 13:39)
It is awesome to have various sizes of wheels available now, just like there are various sizes of frames available now. Over time, certain riding styles will gravitate toward the larger wheel. However, just like tiny wheels are best for triple backflips and dirt jumping, 26ers will remain best for other types of riding.

The well informed debate is about which types of riding work better with different geometries and wheel sizes. My dirt jumper's seat is low. My downhill bike has 26" wheels to remain agile while still having vertical room left for travel. My x-country bike will soon be 29er. My f-around bike on logs and stunts, still 26.

Chorne2 (Jun 20, 2012 at 19:28)
Yea you can freeride on a 29er...when there is a nice smooth trany like that. You could do that stuff on a hardtail. But when you get into the flat 5 to 8 drops you need a 26er with more travel so the bike isn't destroyed. I have no problem with 29ers, but i feel they are better for all mountain/enduro...not freeriding.

Willie1 (Jun 19, 2012 at 12:51)
Hype is only applicable for new trends. 29ers have proven advantages, and proven disadvantages. You don't DH an XC or vice versa. 29ers have been around for over 10 years. That isn't a fad or hype. They aren't going away. How about ride what you like, and others will do the same.

SC-illin (Jun 22, 2012 at 1:15)
Look all I'm sayin is that any wheel size is an option however 26 is the standard and it's amazing. Obviously its easy to understand the advantages and disadvantages of a larger wheel and they've been around like you said so why all of the hype now? Sounds like a trend. In my humble opinion the most skilled riders in MTB are Downhillers and Freeriders and an extremely high percentage of them ride dirty on dub sixes including myself. It's the best if you really mob it...others are always welcome to ride what they like!

Isolated-T-Storms (Jun 18, 2012 at 19:59)
Do you have any statistical backup for that statement. That sounds like something you pulled out of your ass. You may be right but wheels may be stronger than you think. These aren't even designed for dh. I think it would be possible to design a stable dh 29er wheel-set. Ride what you love and have fun. There is no need for hate.

Kitejumping (Jun 18, 2012 at 20:05)
I am not sure about the wheelset on that bike but I ran laps at keystone and trestle for a week with flows on 36h single speed hadley hubs (dishless rear wheel) and they are still true. The rear triangle on this bike could be built stronger though. Bikes like this are great for taller people.

joalst (Jun 18, 2012 at 21:59)
Ive said this many times before and ill say it again. RIDE ONE. And not just a one day ride but experiment with one for a while and then come back so you actually have the ability to argue. If you havent ridden one, then dont judge it. Theres a reason why its so popular

I have tried a niner, tallboy etc. When it was very technical on the climbs (the stuff that 99% cant ride) the 29" wheels were found wanting (back to back test). It just could not cope with being picked up when riding up rock stairs, followed by 1 or 2 power strokes, as the inertia was just too high.

I have also tried a fatbike (snowbike) now that was different and fun,,,

It is an individual choice, that is the great thing about mountain biking.

socalshreder (Jun 19, 2012 at 13:34)
Actually I have rode a 29er. I loved it for XC cuz it trucked over stuff easily, but I still dont belive it belongs in DH. Rember the 24 in DH peeps. What happe to it? Oh yeah its gone lol. And hell a 24 corners so nice. 26 corners great. 29 ehh not so awesome. thats a big wheel to corner especially on a DH track. I hate that the 29 inch wheel is being pushed into DH. i dont see this application of the 29er sticking in DH racing, cuz u need to be able to corner. maybe it will move into free ride applications like big mountain decsents. But hey thats my view on it.

reinholds (Jun 18, 2012 at 23:53)
I have always been a 26inch fan. I guess just because I started riding with it, and I feel most comfortable in 26 inch world. However, I recently purchased good 29inch full hardy. I would't change from 26 to 29 in downhill use, It does't feel that nimble. But, for anything else, I would choose a 29er. It's super fun bike to ride. Very good traction, and once in the speed, it rolls for ages.