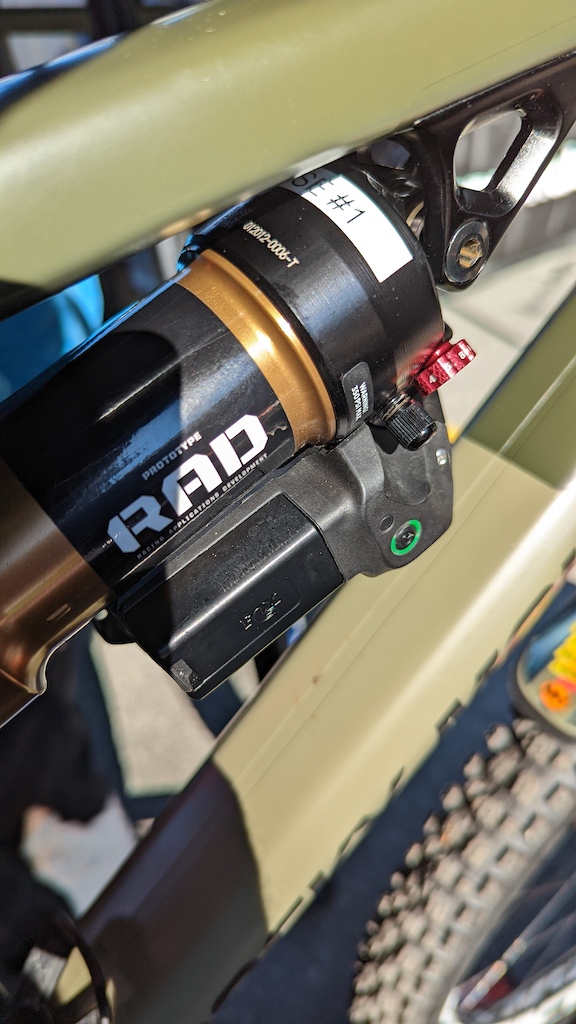 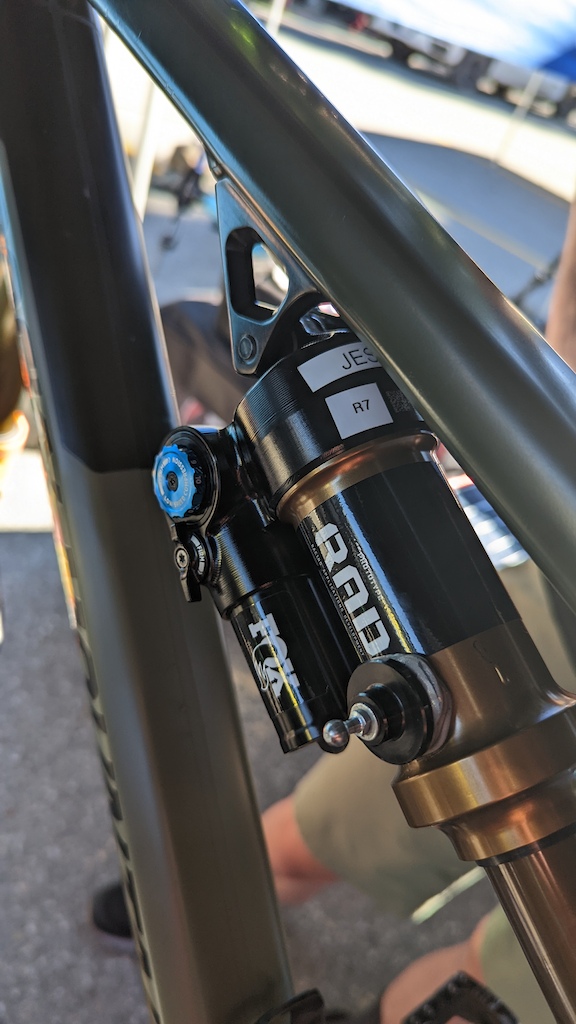 Data acquisition mount point still installed.
Last month we saw some new Fox bits on Ed Masters' Pivot Firebird, and it looks like that product is now being rolled out to other athletes. Jesse Melamed's Rocky Mountain has the new system as well, and he's just piloted it to an impressive result in the EWS Whistler Pro Stage. Unfortunately, Kaz and Alicia are racing the EWS100 right now, Henry's packing up the Pinkbike Racing setup in MSA, Seb's asleep in the UK, and Levy and Matt are off today. So, you'll have to settle for my uninformed, non-tech-editor insights. 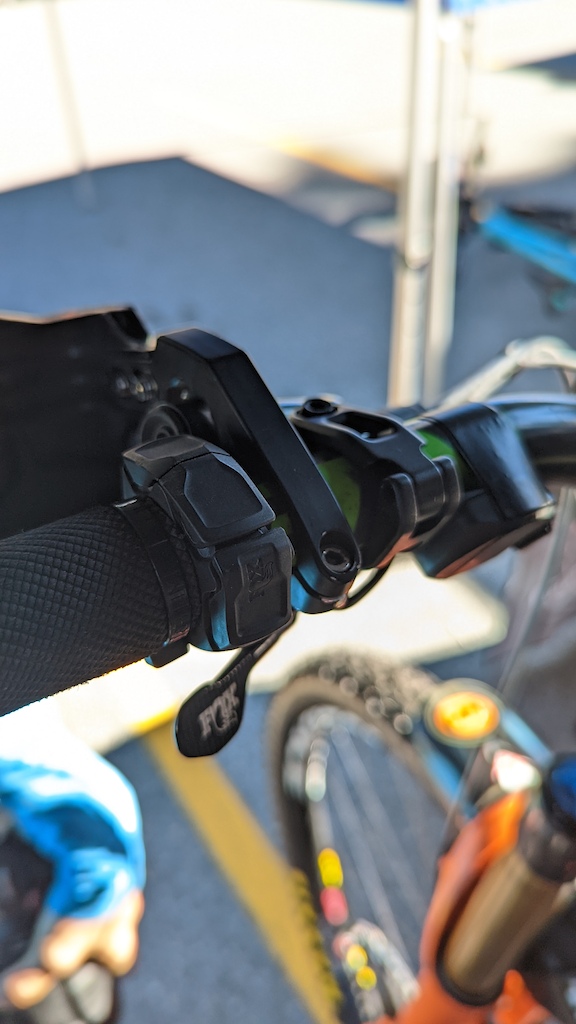 A clean, low-profile remote to change modes without letting go of your grip. 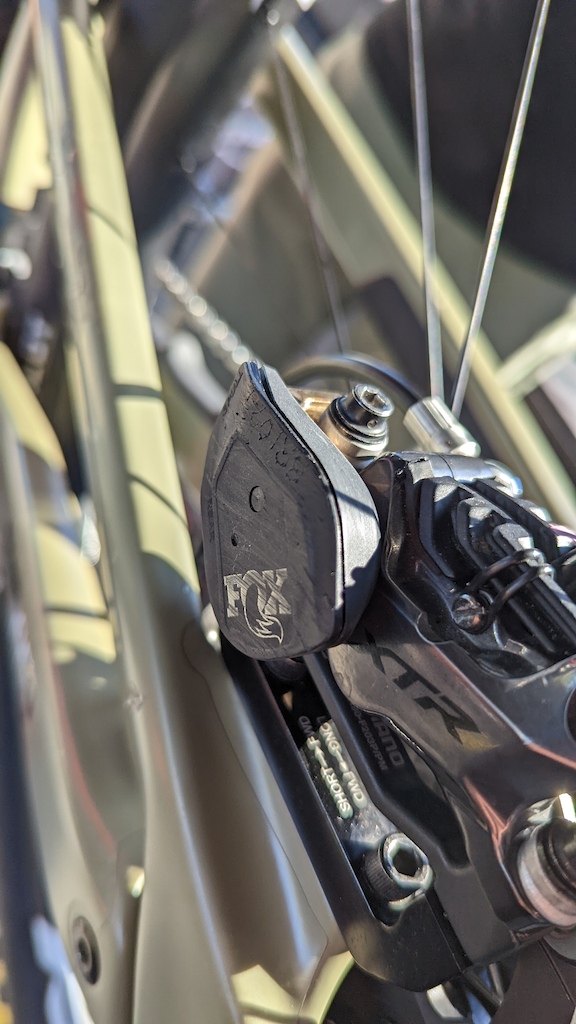 Wire-free sensor on the brake mount.
There appears to be a remote which presumably would cycle through different modes. That's missing from the current LiveValve system at the moment, and could be a good way for the system to err on the side of openness. On track, we saw Richie Rude and Youn Deniaud with similar-looking setups. I'm personally surprised to see racers trying the system out in a place like Whistler, where many of them have historically chosen coil suspension. Although this year's Whistler EWS course has some punchy climbs, I imagine that any advantages from a system like this would be amplified at faster, smoother races elsewhere. Either way, after the Pro stage it appears the system has passed its first major test.

If you were hoping for more information, hang tight. I know Levy and Matt shot a video with Jesse testing on this system that's going to be done for tomorrow. I'm fairly sure Fox is still a ways from production, so not exactly "review tomorrow," but close enough.

Compositepro (Aug 6, 2022 at 15:59) (Below Threshold)
No biggie the cost of electricity increases will mean no one can afford to charge all that anyway

Congrats on the pro stage win, and both ALN, and Remi looking fast af

slowerthanmydentist (Aug 7, 2022 at 8:01)
You just have to ride faster than the speed of sound like these guys and the rattling cant catch you.?

seraph (Aug 6, 2022 at 15:38)
"That's missing from other systems at the moment" actually SRAM has an optional controller for their Flight Attendant system. Most companies that use the system don't opt to include it though.

Mtmw (Aug 6, 2022 at 16:30)
Hint: most mountain bike development today is actually disguised development of future bropeds. It’s all going to be wired into a single battery, run a single wireless bus, and allow you to climb 15,000 feet with zero physical fitness the first day you buy it. Rewatch WALL-E.
You didn’t think 38mm stanchions were for pedal bikes - right?

adespotoskyli (Aug 7, 2022 at 0:44)
In the meantime nothing got improved, just getting more complicated to go out for a ride

aireeek (Aug 7, 2022 at 10:35)
@no-good-ideas: I’m pretty sure I could. I’m a big strong guy, who rides pretty hard. The increase in stiffness from my Lyrik to a 38 was not subtle - it was a surprisingly massive increase.

hardtailparty (Aug 8, 2022 at 7:54)
At least the sram batteries are all interchangeable, so you only need to bring one spare, which is smaller than a GoPro battery.

aleeann (Aug 6, 2022 at 20:30)
I'm thinking this system will also have a connected app that provides ride summary data to the user. Maybe something similar to Shockwiz, but with the ability to apply the data to make real-time setting changes. Just a guess...

Yody (Aug 6, 2022 at 22:04)
That's all I want out of electronics. Is programmable maps with valving adjusts pre programmed but self programmable and a 3 way push of button change.

fwp39 (Aug 7, 2022 at 9:04)
Everyone should go to JesseMelameds youtube channel and check out his EWS stage win helmet cam run. The way he is at redline for 8 minutes Charging the entire time. The speed is on another level the entire time.

notatoad (Aug 7, 2022 at 18:21)
My quick impression from Jesse’s comments in the video is that this does absolutely nothing. He’s obviously trying to be positive, because he doesn’t want to piss off the sponsor. But all he’s got to say about it is that it doesn’t cause problems and isn’t noticeable…

jwon1 (Aug 6, 2022 at 16:46)
Guessing an accelerometer on the rear triangle to sense motion. And then active tuning of damping on the rear shock

jwon1 (Aug 7, 2022 at 6:20)
@Hexsense: The advantage of the electronics is that you can introduce algorithms to integrate acceleration to get suspension displacement, tune damping curves, and maybe introduce estimators to predict future motion. Challenges of the accelerometer would be separating out suspension motion vs overall bike motion. It would be easier to put a position sensor on the suspension pivot but that would make it custom to the bike.

jwon1 (Aug 7, 2022 at 8:48)
wonder if there is a pressure sensor in the air spring to sense shock displacement. Might explain why it's an air shock when Melamed and Masters usually run coil shocks.