Welcome to Pond Beaver 2021: Pinkbike's Virtual Trade Show is Back

Well, I was hoping I wouldn't have to write this one. Despite bike media saltiness about trade shows, we love heading down to the annual Sea Otter trade show in Monterey, California. Well, most of us anyway, I'll let you guess which of the Mikes complains every time. But for a second year in a row, the event isn't happening for obvious reasons. 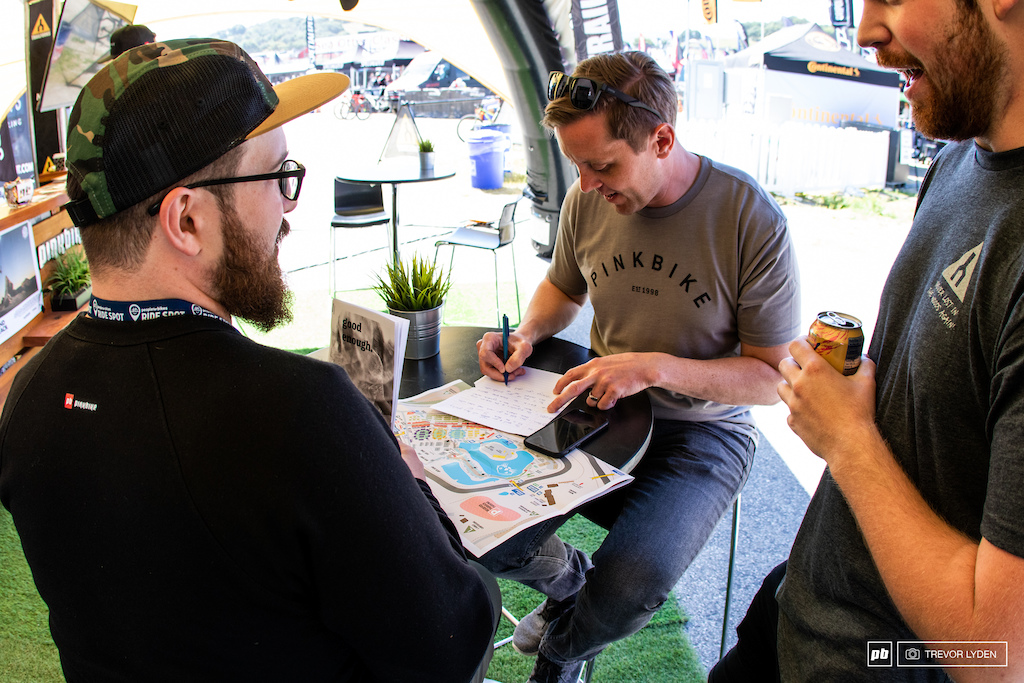 Look at us, so full of naive hope and joy. 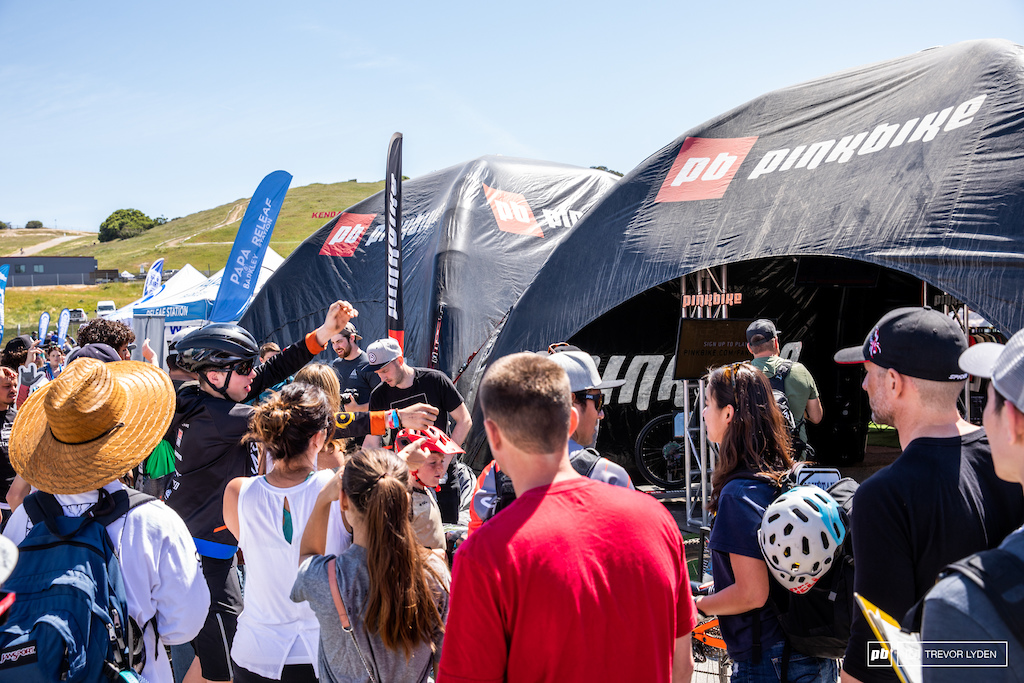 The tents are still in storage...

Fingers crossed for 2022, but in the meantime, there's still a bunch of new stuff coming out. So through the magic of the internet and the postal service, we're putting on another virtual trade show: Pond Beaver 2021.

We'll be taking a look at all the new tech and doing our usual show coverage—first looks, randoms, videos, etc., but we'll be doing it from the comfort and safety of home. In order to recreate the experience as accurately as possible, I'm going to make sure I've got a sunburn, a hangover, and dust in my eyes at all times.

Most importantly, we'll be doing another Pets of Pond Beaver. 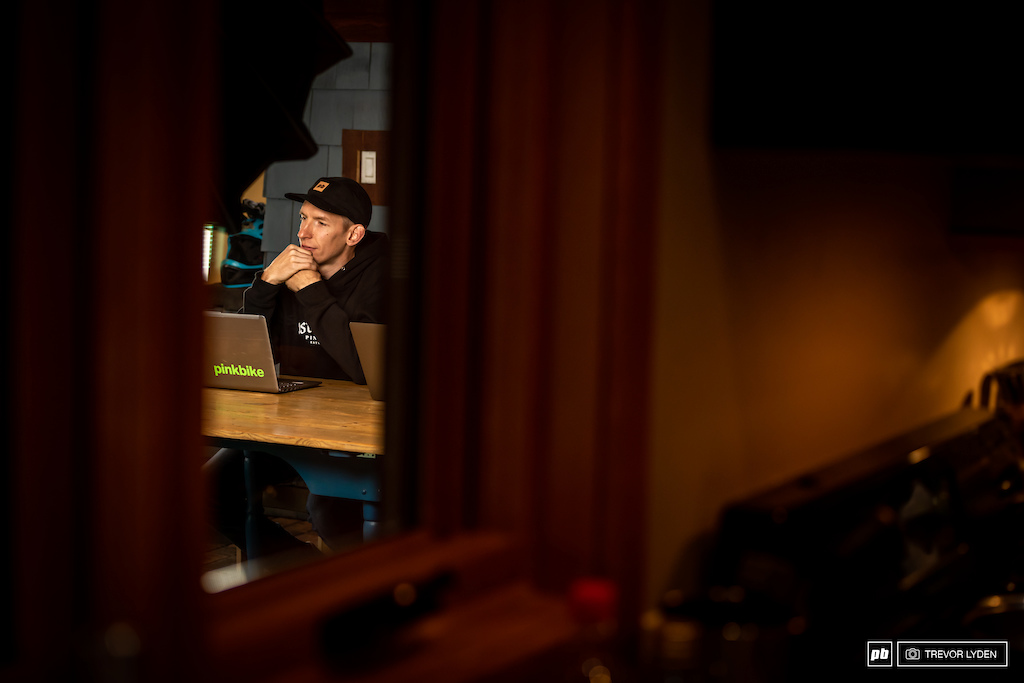 Over the next few weeks you'll see a ton of new bikes, suspension, and gear from Pond Beaver, starting tomorrow. We've got fresh goods from a ton of brands, including Trek, Fox Factory, NS Bikes, Dakine, Ion, Niner, Race Face, Lezyne, and many more!

DHhack (Apr 7, 2021 at 5:09)
The way sales are going, there’s no point to the traditional trade show model. Give all the employees an extra week of vacation instead.

TerrapinBen (Apr 7, 2021 at 7:52)
Funny thing about weekends when you're unemployed They don't quite mean so much Except you get to hang out with all your working friends

Haydenbro (Apr 7, 2021 at 7:13)
Probably telling people about small bump compliance and how long his dropper post is.

acdownhill (Apr 7, 2021 at 7:43)
must have called the wrong guy a pinker at curling camp and got stabbed

brianpark Mod (Apr 7, 2021 at 8:11)
Levy is working on some NFT interpretive dance about the supremacy of linkage forks at the moment.

ridingofthebikes (Apr 7, 2021 at 8:58)
Just think of all the emissions we have saved over people not needlessly flying from all over the world to waste their time staring at bike parts when they could be doing it like this behind a screen. much better.

EricHarger (Apr 7, 2021 at 9:28) (Below Threshold)
Just think of all the bike shows we could have if we stopped spawning rug rats.

rubberbutter (Apr 8, 2021 at 14:14)
And think of all the bike parts which would be delivered on time at the nice low 2019 rates. The lack of commercial flights is part of the global logistics nightmare and the new high cost of getting anything into your consuming hands.

I'm a business owner in a trade and I could have bought a house and put you through college with the money I've spent in the last decade, just in trade show participation fees. My company takes a last-minute discount booth in the pop-up tent behind the tool shed... a brand like The North Face builds a two story discotec in the middle of the main hall. Presumably, they pay more.

I'm guessing that @ridingofthebikes has no idea what a trade show is, what it's about, who the different interests are which come together for a few days, and what the Human spirit is all about. It takes a person who has only ever "wasted their time staring at bike parts" to think that his mountain bike has anything to do, at all, with people who would actually do such a thing (maybe a tiny bit for marketing and sales researchers, to occasionally study the natives). First of all, they've already seen everything that can be seen on the screen, that's part of the trade. Secondly, they don't "waste their time" when they look at trade documents, such as pictures and specs of bike parts.

Trade shows, generally, are open to the public. But they are not public events. The public gets to see a lot, but they are just the public, at a trade show. Have a sticker.

Not picking on you, @ridingofthebikes, but I'm going to continue. You teed me up too high, time to swing... @brianpark was pointing out that there is often "waste" in terms of company resources at these trade shows. And he's right. In the days of The North Face disco parties and free beer (not public), a lot of companies (including media companies) would send everyone, because there is a shit load of work to be done in four days and its important to have your best team there, even if your ace southpaw don't like hotel rooms and free beer. You totally misconstrued his comment and warped it to fit "that way of thinking" which you "love". Thoughts and emotions are two entirely different things. When you love thoughts, the result is literally "ME ME ME.... it's all I heard man sorry".

When you love thinking, the result is quite the opposite. At a certain point, you get a group of like-minded thinkers who, for one reason or another, come together, share (some steal) ideas on their mutual thought, and go back to their laboratories having decided on the next step to develop their idea. These folks call themselves a trade and the event a trade show.

The fact that there are still no trade shows should give pause to all of us. My business is not content with the "new normal situation". Every business I work with is not content with the "new normal situation". The "new normal situation" favours monopolies, organised crime, parasites of every type, and brands partially owned by BlackRock. The consumer is in for a nice ride. Producers are asking themselves why they need to work like damn donkeys when they can sit in the grass and think about something else (like MTB!) all day without taking another order or paying another tax, because they know they are in for a nice ride... and there are no brakes on this "new normal DH...". (Also no seat, just a seat tube. Chainless. Full New School.)

In any case, a trade during war time isn't a trade... production on government command isn't trade. Nobody gets to build or ride a bike during the war. RIP Fausto Coppi. Bella, ciao!

ridingofthebikes (Apr 15, 2021 at 14:27)
@SteepJobs: Dude.... calm the f*ck down. I've been to a trade show. and everything you said is ABSOLUTELY a long-winded unnecessary triggered response about your opinion. Please suck a D.

ridingofthebikes (Apr 15, 2021 at 14:29)
@SteepJobs: It's worth noting my comment received 23 upvotes and your's is getting crickets. do the math. you're obsessed with your opinion and love trade shows. calm down and go ride your bike man.

mackay66 (Apr 7, 2021 at 5:38)
@XacciX: probably still explaining the importance of checking your tyre pressure to other pb staff

chakaping (Apr 7, 2021 at 5:54)
Hope that picture of Kazimer was taken just as he'd put the finishing touches to the EXT fork review, and was taking a moment to enjoy a feeling of quiet satisfaction for a job well done.
I might be wrong, but that's what it looks like to me anyway.
Am I right @brianpark?

valleytroll (Apr 7, 2021 at 5:26)
You missed the abbreviated form of Richard to make the usual PB forum crass joke

bikeboarder (Apr 7, 2021 at 5:18)
Humm, Crazy. From what I'm hearing at the PB podcast, Kazimer is like riding every day. That would mean he does the Zoom and stuff on a bike using a cell phone mounted on the bike, not in a cosy chill out atmosphere with jazz music playing in the back ground. Yup, that photo is fake.

RayDolor (Apr 7, 2021 at 8:35)
I think it's real, but posed. Intended to portray the intelligent, insightful, reflective side of Kaz. Needless to mention, the photog had his work cut out for himself....

zwa2 (Apr 7, 2021 at 8:18)
I could care less about bikes and parts that won't be available till next year, at which point they'll be obsolete. However, I'm very stoked for the pets of PB round 2!

lowkeyokeydokey (Apr 7, 2021 at 6:57)
This gives me that feel when you get to the top of a climb and you derailleur catches a stick and then have to walk back down to your car with a broken bike and Edith Piaf won't stop playing in your head.

Can't believe she was mentioned on Pinkbike.

lowkeyokeydokey (Apr 8, 2021 at 5:52)
@flipoffthemonkeys: Saddest woman in history bruh. Only out sadded by maybe Frida Khalo or Billie Holliday.

flipoffthemonkeys (Apr 8, 2021 at 11:47)
@boogereater42069: i think the saddest woman in history is my ex-wife. whick is kinda why she's my ex-wife. i couldn't stand the sadness...it just wears you down. i've been to mexico city and i've seen the frida kahlo house and the trotsky museum and a bunch of diego rivera murals. frida's life was punctuated by tragic events but she didn't really cave in to eternal sadness. actually quite the opposite. i think she actually did pretty well for herself given the circumstances. a broken derailleur is no reason wallow in darkness my friend. remove rear mech/shorten the chain and single speed back to the car!

Heidesandnorth (Apr 7, 2021 at 7:13)
I wonder: is pounding Richard a serious sport or just a leisure activity?