For most of my career I have been riding with a vertically torn patellar tendon. Being a typical stubborn man about going to the hospital, I never got it checked out, instead just took an Advil for the pain and continued to ride anyway. Over the years that tear spread with each kneel for construction work or a slam to the concrete while riding. All it took was one slam on December 21, 2019 which would change my life forever. 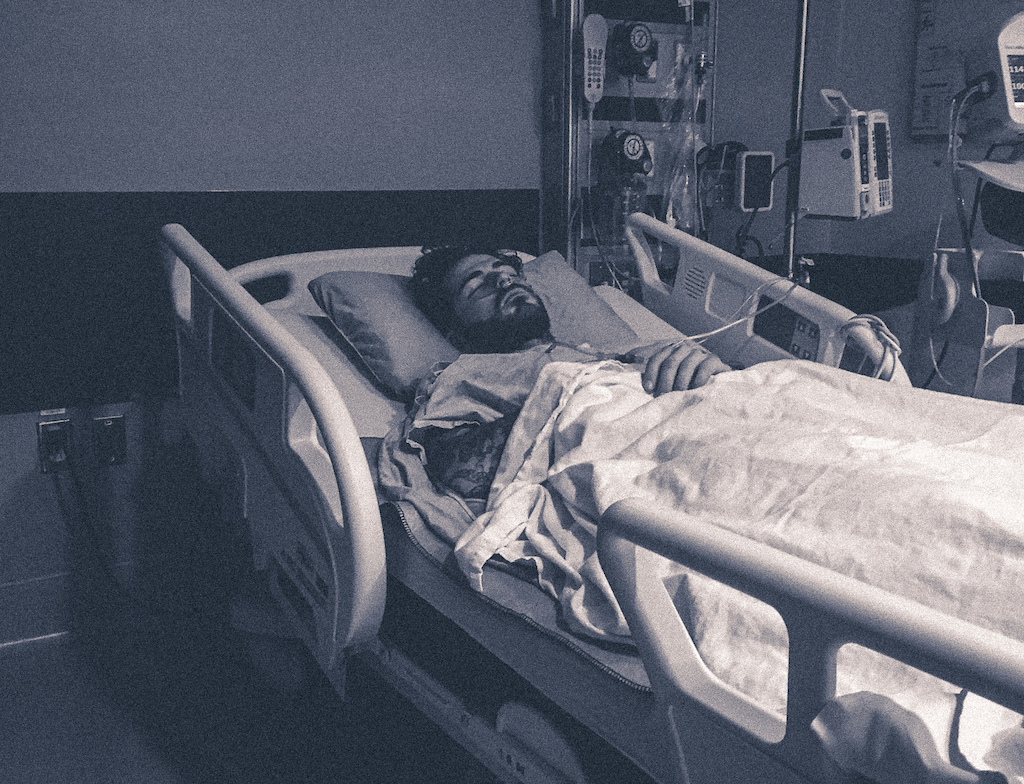 This pain had me thinking it was only a dislocated knee cap but would turn out to be a fully ruptured patellar tendon and reticulum. All that connected my kneecap to my lower leg had pulled from the bone and sent it into my quad. An expected quick pop back into place would turn into 5 days in the hospital on standby for emergency surgery. After days of no food and water, on Christmas Eve at 4:20pm I added a 17 inch scar unwanted knee replacement to my right leg. 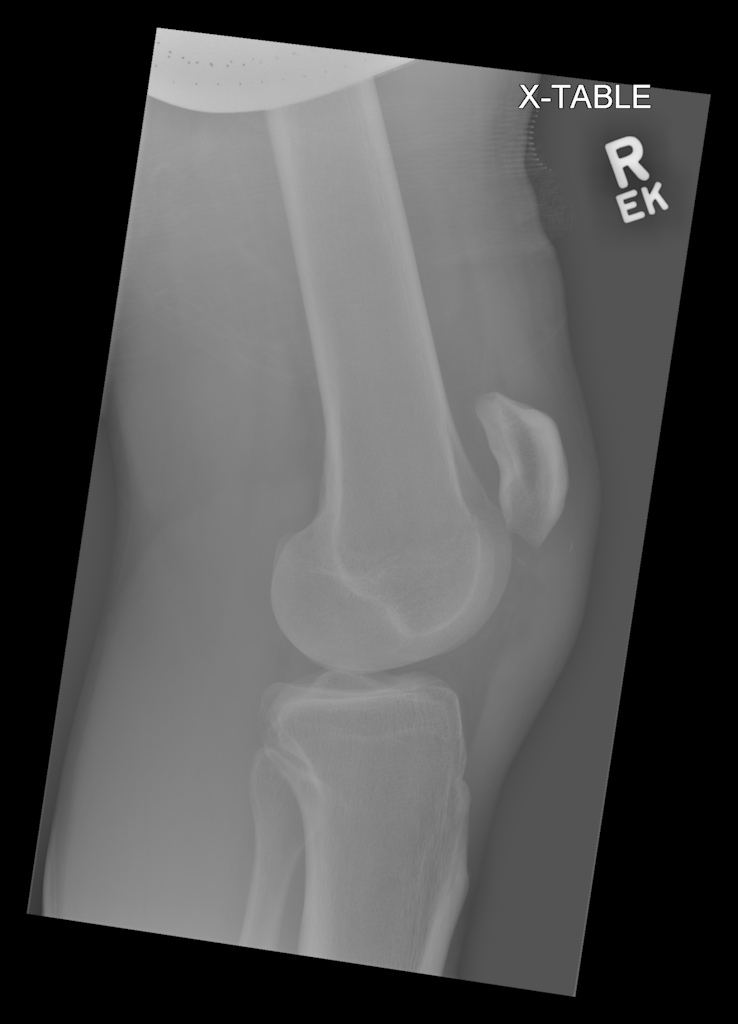 Besides the unbearable pain that came along with this injury, we also had COVID-19 to overcome. For me, this meant the shutdown of physiotherapy and check-ups, and left me fully reliant on myself to get through the next 9 months of my life. Out of sheer will and drive to prove doctors and surgeons wrong, I pushed it until I couldn’t keep my eyes open from agony. The process seemed endless and impossible; a couple more degrees in bending my knee each day that felt forced at best. There were many days I wanted to give up, just a broken man holding on by threads playing guitar and keeping it together in the form of music therapy. 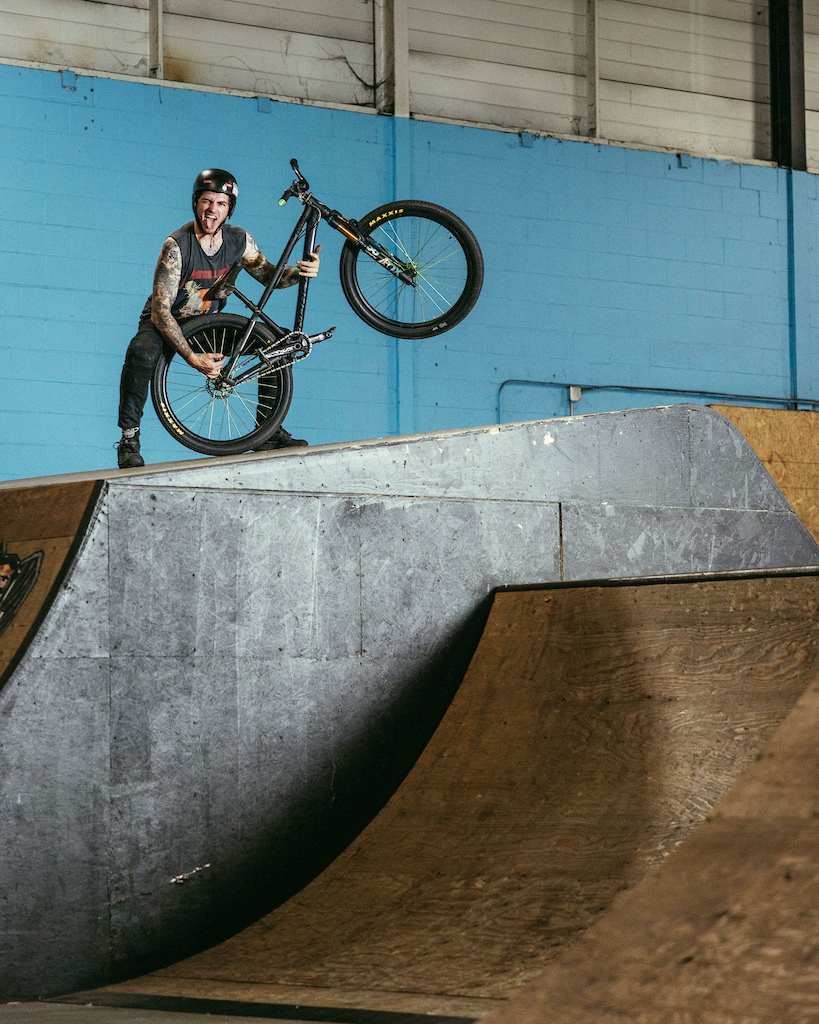 Fast forward 8 months and the overwhelming urge from peer pressure to ride took over and I found myself at the trails. Hesitant at first, when my hands hit the grips it all came back and I proceeded to get upside down first ride back. I called up my best friend and photographer Broderick Horne and we set out to change the game. Having had our biggest clips filmed before the knee ending crash this truly gave us the motivation to get back to business and continue to push my limits. I thought the mental battle of the injury itself was tough. That was before I wrote down the list and started shooting. 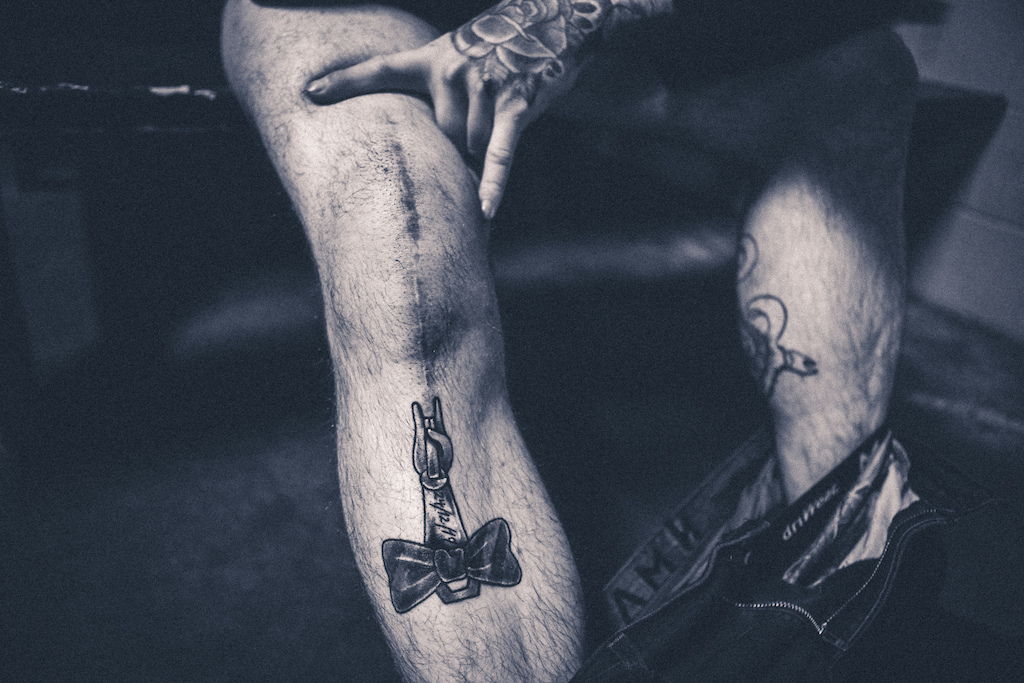 The idea behind this one is simple. I’ve been “dead” from the sport for years as far as people have thought, so why not poke some fun at that? I’ve always been one for including little accents to a piece for the extra pepper in the seasoning, so every bit of this edit is set to make you feel the same emotions I felt while shooting. The coffin acted as double duty in such that it was my awakening from the depths of depression and “dead career”, but also the symbolization of conquering my inner demons. Even the music is about a man whose soul is in turmoil and the lyrics speak of a tornado of emotions. Everyone who has been through a long term injury understands the massive effect it plays on the mind and your confidence, so this song hit the hammer right on the nail. (Coffin Humor -1 Point) 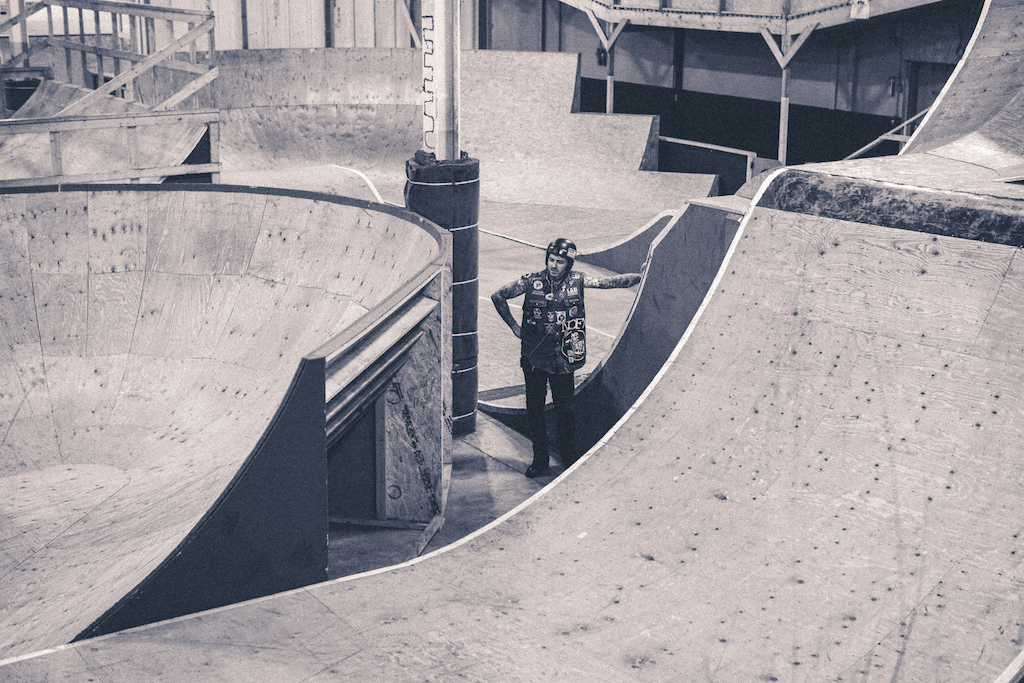 Joyride 150 has been around for 10 years now so I wanted to showcase the most difficult tricks and lines I have attempted or achieved here. Having done a few videos here, Broderick and I wanted to approach this one differently. Joyride 150 is renowned for big transfers, and quarter pipes are often neglected in the MTB world, so our focus was directed at both. With COVID-19 cases soaring in southern Ontario, closure and lockdown were looming over our heads, the reality of not finishing on time was troublesome. Having invested a year into this and a nearly replaced knee, we weren’t about to go down without a fight. With a short window of opportunity, limited amount of people in the park per day, and a scary list to film, the stress to finish was high and the pressure was on. 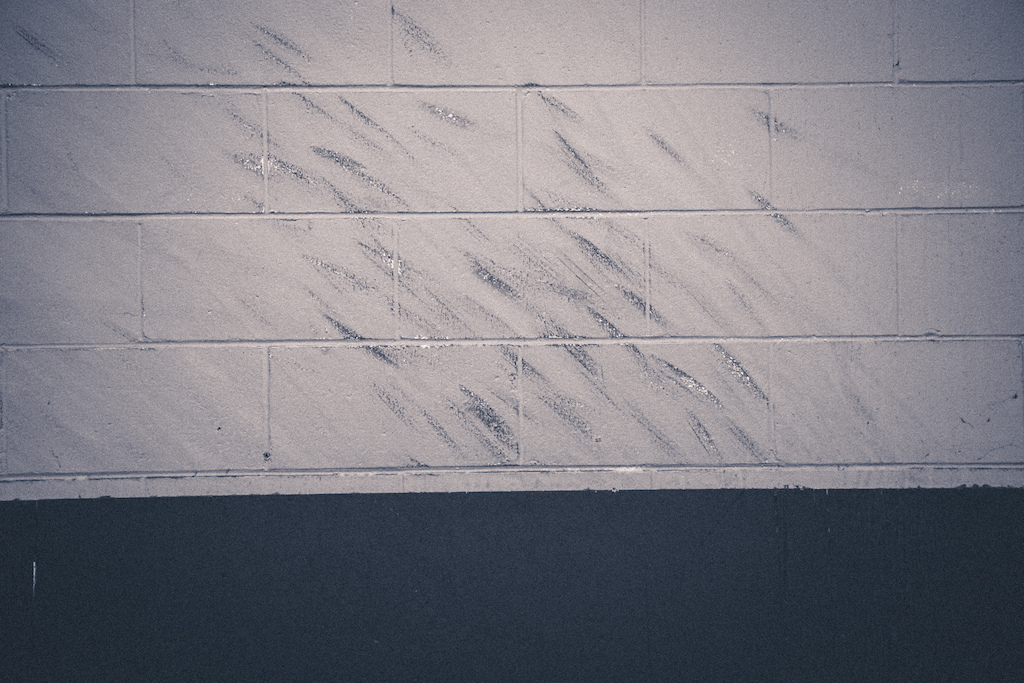 In a year that was tougher than anyone saw coming, I owe thanks to so many. The Joyride 150 family has been a driving force in what made this year have some enjoyment and the staff and friends helped me bounce back from what I thought for sure was the end of the line. What seems like the end may be a new beginning in disguise. 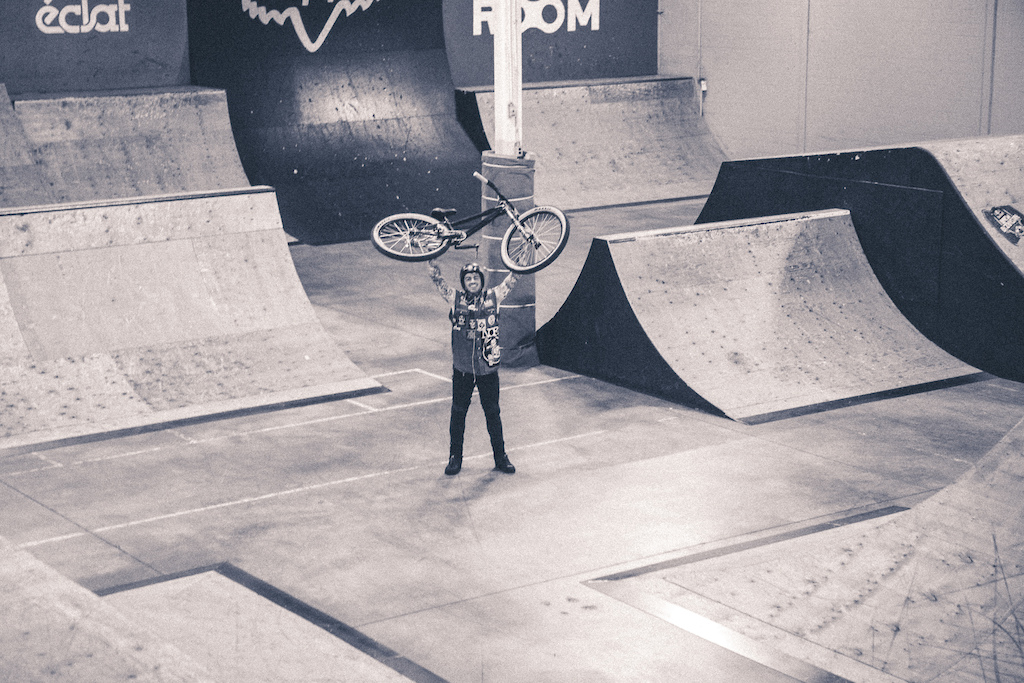 lehott (Dec 27, 2020 at 14:49)
god damn, what a legend, here i am struggling with my patella syndrome/ runners knee (right knee) that moderately makes me do less active endeavours..( anybody know a physical rehab routine?) i couldn't imagine getting intensive surgery like that done on the knee. mad props

crazy-canuck (Dec 27, 2020 at 20:39)
Find the right physio and commit to what they say. I've had the same issue and creeps back from time to time (though never as bad as it first was). I was given lots of steching excersises (3 x 30 minutes each day) and some low intensity strength excersises to compensate for imbalances. For me it was about 3 months of being pretty dedicated to that regime (would be lying if I said I did it every day) and it was like night and day by the end. Now when it creeps up again I know what to do.

Dogl0rd (Dec 27, 2020 at 21:55)
Start with slow body weight squats... Then add weight and do goblet squats, then progress to eight split squats or pistols. Getting to the single leg exercises year helps. It's a very slow process -slowly adding weight but it works.

Stokedonthis (Dec 28, 2020 at 1:53)
For me riding uphill with kneepads on was causing a big part of the patellar problems ... maybe give pulling them down beforehand a try, it helped me a lot

NickHathhorn (Dec 29, 2020 at 10:53)
Yo @lehott KT tape works wonders for patellafemoral syndrome. Check out some different videos on youtube the cover how to apply it properly, then figure out what combination works best for you. The elasticity of the tape creates a slight amount of space between the patella and femoral groove. Almost instant relief. This method got me through hell week training as a Heli-Rappeller with the forest service.. The brace the doctor gave me just made the symptoms worse.

jgusta (Dec 27, 2020 at 20:16)
Fully ruptured patellar tendon (ligament) with mandatory surgery following as well. Slow go at first with knee immobilized for almost 8 weeks, but biking was my main source of rehab once the initial post-surgical healing phase well underway. At 4 months, was back to close to normal riding and ultimately pushed my riding progression much further ever since each year. Unexpected time off bike is not a bad thing. For me was more time to read and spend time with family and build my passion and motivation to ride again with greater vigor. Kudos pushing through it getting back to form. I personally don’t take any rides for granted ever since myself

Luca-Ernst (Dec 28, 2020 at 11:40)
Props to him. im 17 and have dislocated my knee 13 times one of them crashing on a bike, landing with my knee on a rock and tearing the ligament off my knee cap. ive had 4 reconstruction surguries and im only 80% there. my life will never be the same but mountain biking has helped me tons

tsn73 (Dec 28, 2020 at 12:19)
I also fully ruptured my patellar ligament (avulsion fx) alongside with my ACL in 1995 snowboarding and it took 3 surgeries over 2.5 years to recover. This injury was life-changing for me and many others. But for anyone to come back to ride this hard after a knee replacement is next-level badass. Much respect!!

Tannerstolt (Dec 27, 2020 at 16:04)
what a heavy edit, I have no complaints other than cutting it off before Marty's incredible solo

Lee-Gee (Dec 28, 2020 at 3:26)
Shattered Patella here, getting back to riding after something like this is very hard. Well done.

barbarosza (Dec 28, 2020 at 4:21)
God damn I’m the first hater on here today.And a late bloomer so weird . Came to say yeah good skills however I never liked Matt Macduff back in his days of this type
Of riding with a horrible wannabe super rocker out of the 1980s.

Man I’m such a hater

kikass (Dec 28, 2020 at 7:02)
I was born in 93 and my names not Matt Macduff. Also far more a man then you'll ever be. You'd never be able to come back from this and woukd tremble at the thought of this horrible 80s super rocker in person. Take your shit to the toilet bowl

Aight brother ! You got the credit . Damn

barbarosza (Dec 28, 2020 at 7:59)
@kikass: could ve taken it as a compliment . I mean look where he s at and he started off from there . He has an amaizing podcast and gets to live in Kelowna. And was in the same stuff you re into . Also same angry attitude

broderickhorne (Dec 28, 2020 at 9:21)
Not sure why you felt the need to post this comment... if you don’t like it, don’t watch it. Everyone is entitled to their opinion but this is just pointless. Over a year of work to create something to entertain people but then people like you come by, who have probably never even created a video to say hateful things like this for no reason. Loser status.