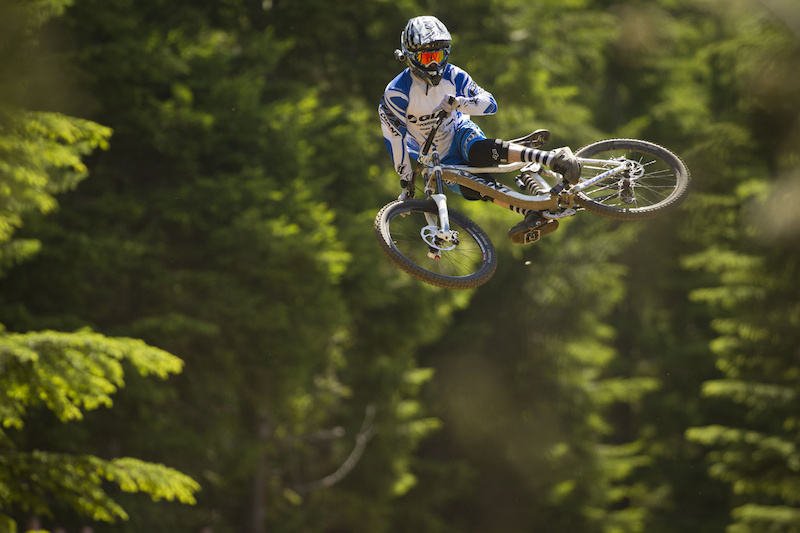 <Deleted photo>
Whistler Mountain Bike Park’s rental fleet of Giant bikes will consist of 150 Glory and Faith models. 50 of them will be set up for the expert or bike “fanatic” who wants to rent a top of the line race or gravity machine, while the remaining 100 will be set up for the novice to intermediate rider.


The Giant bikes will be equipped with the latest DH specific components from SRAM, RockShox, AVID and TRUVATIV. The addition of Easton Havoc DH wheels and Maxxis tires results in an exceptional rental fleet for any type of rider. Each bike will be meticulously maintained by Whistler Mountain Bike Park mechanics who will be completing SRAM Technical University (STU) training and will have a thorough knowledge of the Giant bicycles. 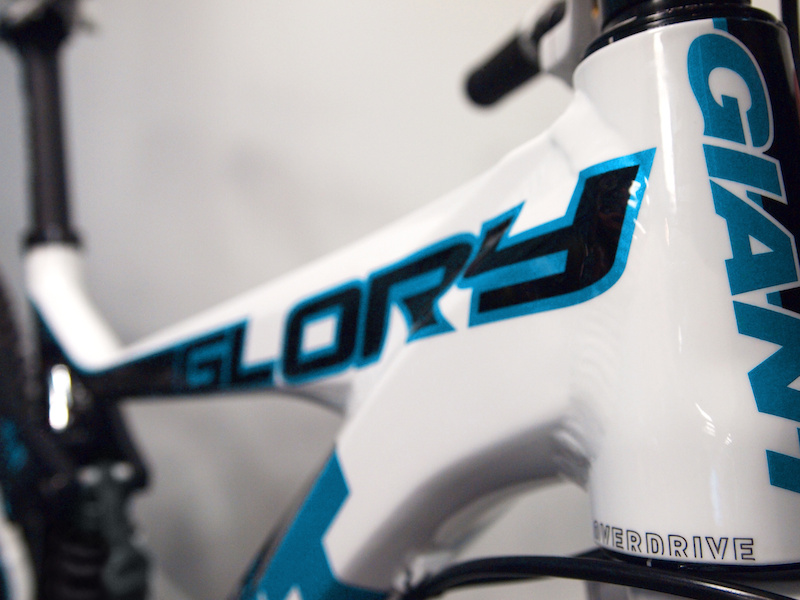 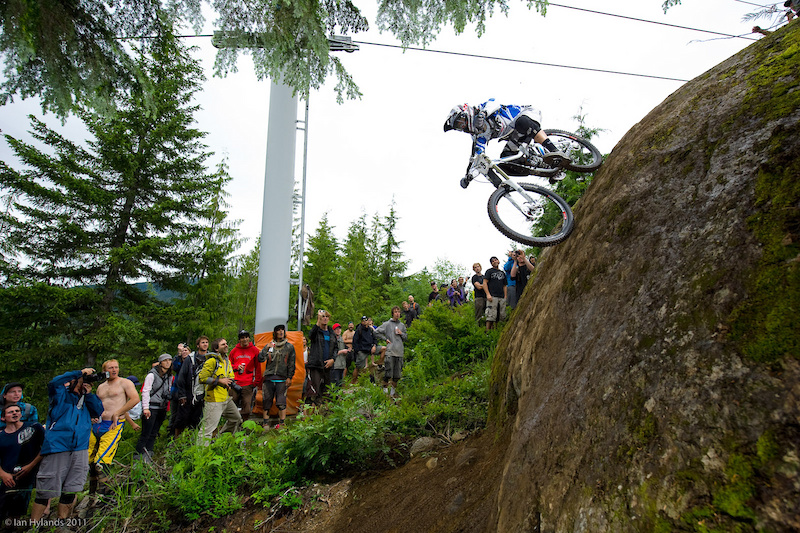 Andrew Neethling racing in the Canadian Open on his Giant Glory.

With over 2,500 employees, offices in over 15 countries and a focus on getting people on bikes, SRAM is thrilled to continue an almost 11 year relationship with the Whistler Mountain Bike Park. 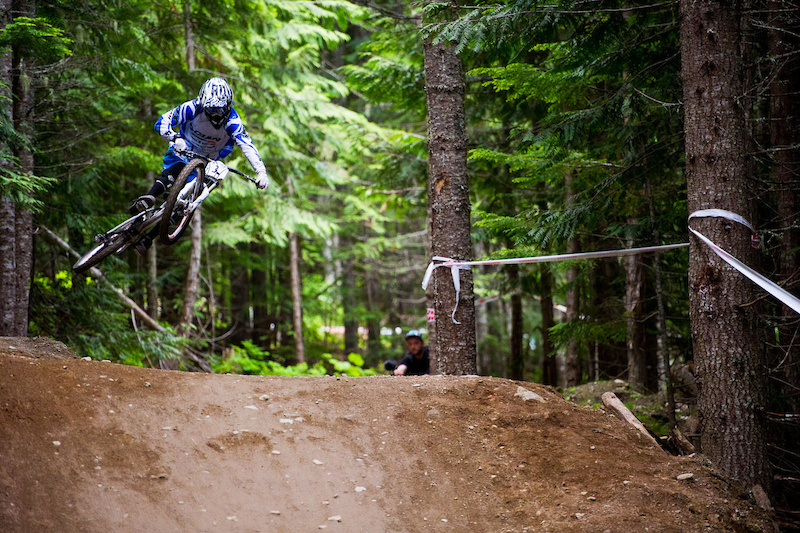 fr3er1d3r (Feb 2, 2012 at 0:42)
I was wondering how a bike park like Whistler was renting bikes like Konas. I like how it took Kona for EVER to step up their game after many broken frames and overall crappy designs. Well this year they're looking a lot better, but only because they're looking more like Giant hahahaha Look at the newer kona bikes, you'll see just what I'm talking about.

StinkyD-509 (Feb 3, 2012 at 17:46)
@ xpirimint, there is more simularity with suspension designs between Kona and Trek than Kona and Giant

thelumberjack (Feb 1, 2012 at 10:51)
I agree top comment - but are(n't the braking bumps mostly caused by (slow) riders dragging down the trails?

MY GOD! its happening!

kfitz (Feb 1, 2012 at 6:24)
Its funny how everybody disses giant, even when they make frames for almost every bike manufacture

mountguitars (Feb 1, 2012 at 8:54)
and they also don't know or maybe tend to forget that giant is the world's biggest bike manufacturer, merida playing 2nd to the title.

robc10 (Feb 1, 2012 at 13:23)
Giant glory frames have gotta be one of the nicest out.. my freind rides one and i love the square tubes instead of the normal circular straight downtube

FlailingChimp (Feb 2, 2012 at 1:25)
most of trek's comfort fleet/hybrid/all around low-end fleet is manufactured by giant. I work in a Trek delaer and anytime a bike say sub-$500 comes in the tag says Giant Corp. on the shipping label.


Good to see whistler stepping up the quality of their fleet.

BobbyJr271 (Feb 3, 2012 at 12:07)
Giant makes 9 out of 10 Trek (see made in Taiwan) Not just low end but high end as well. They are by far the largest bike manufacturer in the world. And they are filled with some great people who ride quite often that are definitely not slouches. wow I sound like I work for them I'll stop now.

WhistlerMountainBikePark (Feb 1, 2012 at 0:42)
Welcome to the team Giant, RockShox and Avid!

highstreet (Feb 1, 2012 at 7:43)
All that matters is what they said at the bottom of the article, "Opening day for the Whistler Mountain Bike Park’s 2012 season is expected to be in May." Only 4 Months left!

genericmk (Feb 1, 2012 at 8:19)
Bummer for Canada; it's weird that they don't have a deal with one of the many bike manufacturers that are Canadian!

RedShredder (Feb 1, 2012 at 16:23)
As awesome as it would be to have a Canadian brand supply WMBP with their bikes, it's not really feasible. For a company of Devinci's size it would be worth way too much (for Whistler and Devinci) to provide 150 Wilsons. Rocky Mountain "might" be able to pull it off, but Giant just so huge! It's easy for them to keep prices low on a fleet.

cedric-eveleigh (Feb 1, 2012 at 5:48)
there isn't overdrive on the double crown models (glory) because there is no stiffness gain due to the connection of the stem to the top crown.

mountguitars (Feb 1, 2012 at 8:56)
well, the other point of having an oversized head tube is bigger weld points for either the down tube and/or top tube which makes the bike stiffer and/or durable.

mountguitars (Feb 3, 2012 at 22:16)
haha, sorry about that. its just that there are no patented Overdrive steerer tubes to begin with. its always been Overdrive head tubes. so the first thing that came to my mind are the head tubes. LOL!

o2beland (Feb 1, 2012 at 0:18)
Glad to see the bike mechanics will be completing a SRAM course a couple of mechanics last year were idiots

b-mcclelland (Feb 1, 2012 at 8:06)
I'll get excited about rental bikes when WBP teams up with a brand from this side of the border.

hurtinunit (Feb 1, 2012 at 9:49)
Good riddance Kona! Gone are the days of riding my AM rig instead of renting a Stinky. Can't wait to trash a Glory at Whistler!

faultlinetv (Feb 1, 2012 at 17:27)
Hey I wasn't saying it was a bad thing. There have just been a lot of major changes this year. Kona has been with Whistler for a while now so its interesting to see them out, and Giant in.

I reckon Whistler might have a few (around 149) warranty claims to make this year!

cameronbikes (Feb 1, 2012 at 3:50)
Like how they photoshopped out the beer can that Hart was whipping. Makes it look a little more professional. Sorry for Kona. Good luck giant.

bomberdave (Feb 1, 2012 at 9:38)
although the flatline is a very nice bike, you clearly have no idea what your talking about. Giant is THE biggest company with some of the best tech available. Those purdy Trek session 88's? built in the same factory as the Glory, with a big ol' Giant sign on it.

Sorry though for Kona, those guys are awesome to deal with. I love my Operator and Hei Hei and the support that come with them. To all the people that complain about Kona, In my shop days I've dealt with far worse from "better" and more popular company's. Also if your a solid rider, you'll know that the brake bumps aren't caused by bike's, but shitty riders that can't handle their speed.