Out of the Ordinary: InstaFund La Prima Racing Experiences the Fernie Gravel Grind 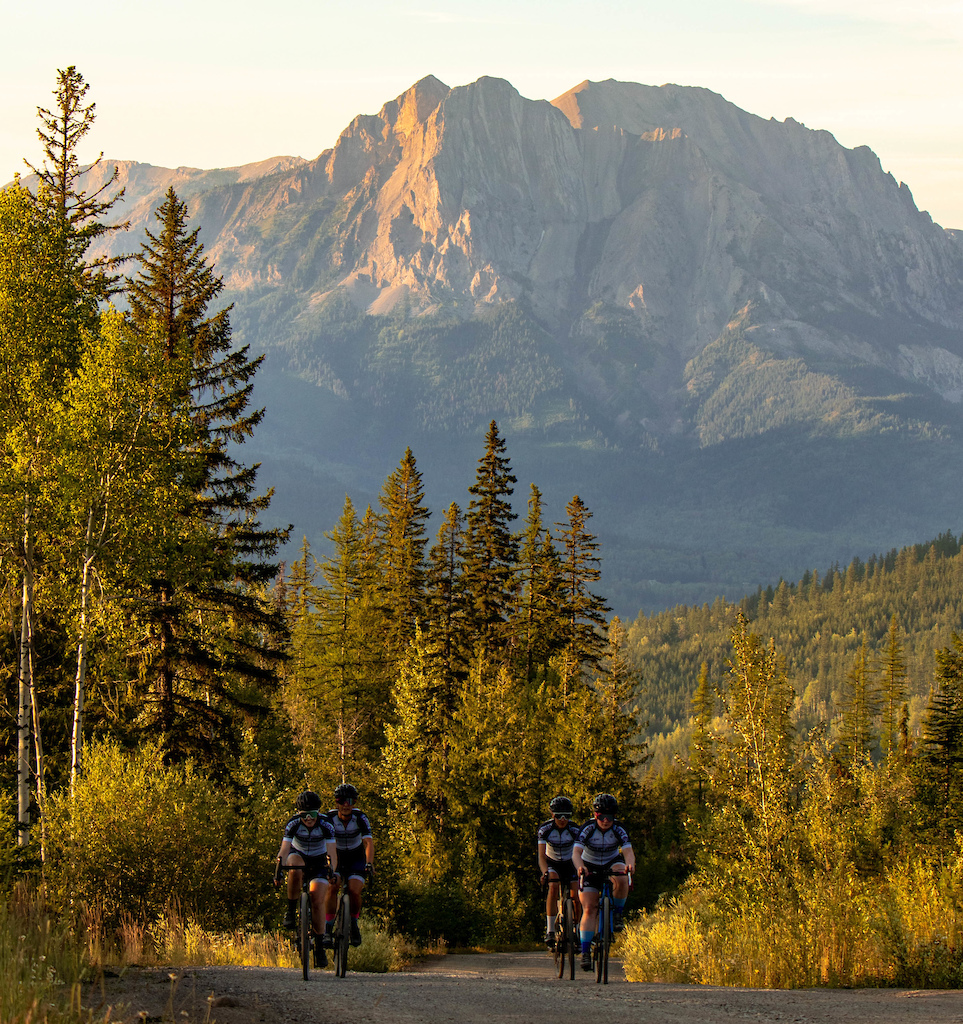 OUT OF THE ORDINARY
InstaFund La Prima X Fernie Gravel Grind
Team InstaFund La Prima and Mt. Hosmer's Ghostrider // Nick Nault
It’s been a season that has gotten completely turned upside down not once but multiple times, forcing events to drop off months in advance and leaving racers chomping at the bit for any sort of competition or fast paced adventure. The Canadian based Women’s UCI Continental Team, InstaFund La Prima Racing, made the most of the rather uneventful season by joining forces with the Fernie Gravel Grind for a truly out of the ordinary team camp on the back roads surrounding Fernie, British Columbia. Like the infamous Ghostrider on Mt. Hosmer, some rides live on forever, and this week’s unforgettable gravel adventure was certainly one of those rides. 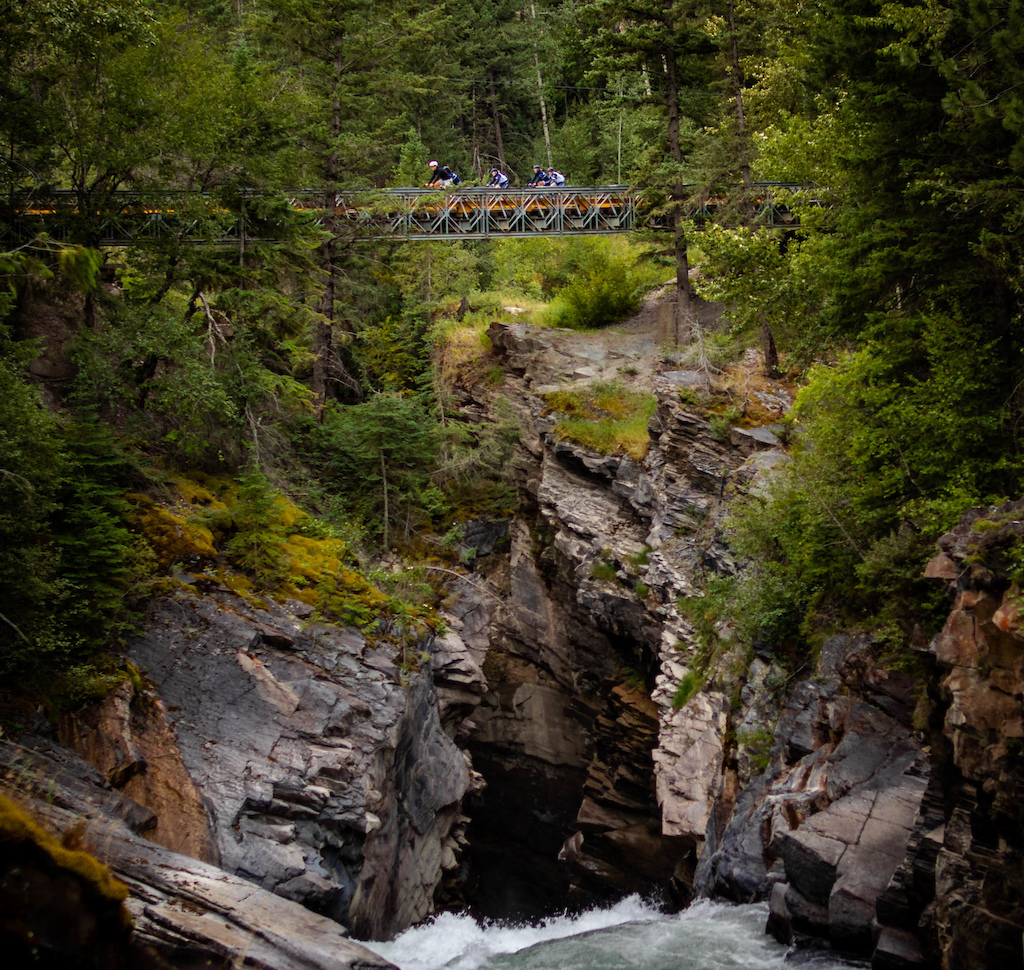 The Bull River, just as peaceful as it is dangerous // Aidan Jones
During the first week of August, InstaFund La Prima Racing traveled with four of its athletes and team mechanic to experience the gravel hype that has been steadily brewing in the area ever since the inception of the Fernie Gravel Grind in late January of this year. The Fernie Gravel Grind is a non-profit fundraiser gravel ride for the local trail building organization, the Fernie Trails Alliance, that has since gone virtual featuring 7 incredible backcountry gravel routes and epic draw prizes for participants to choose from. Joining team InstaFund's East Kootenay adventure were a mixed bag of locals: Nick Nault professional photographer, Aidan Jones gravity athlete for Pivot Cycles, and Carter Nieuwesteeg event organizer of the Fernie Gravel Grind and cross-country athlete for Santa Cruz Bicycles. Both Nick and Aidan worked tirelessly around the gravel adventures capturing the special moments while Carter played tour guide. 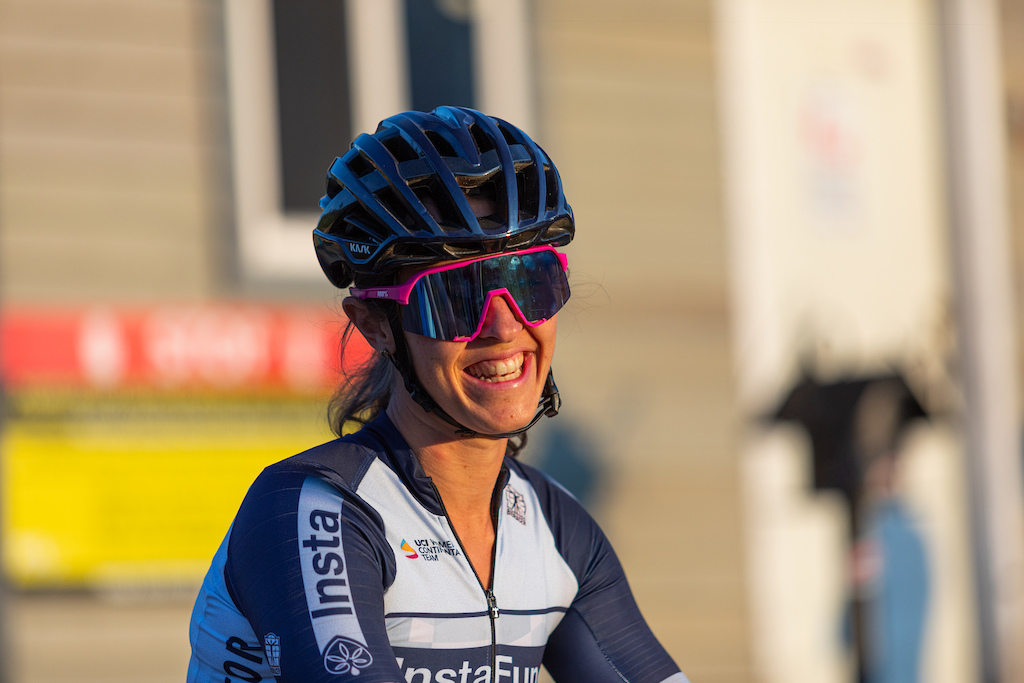 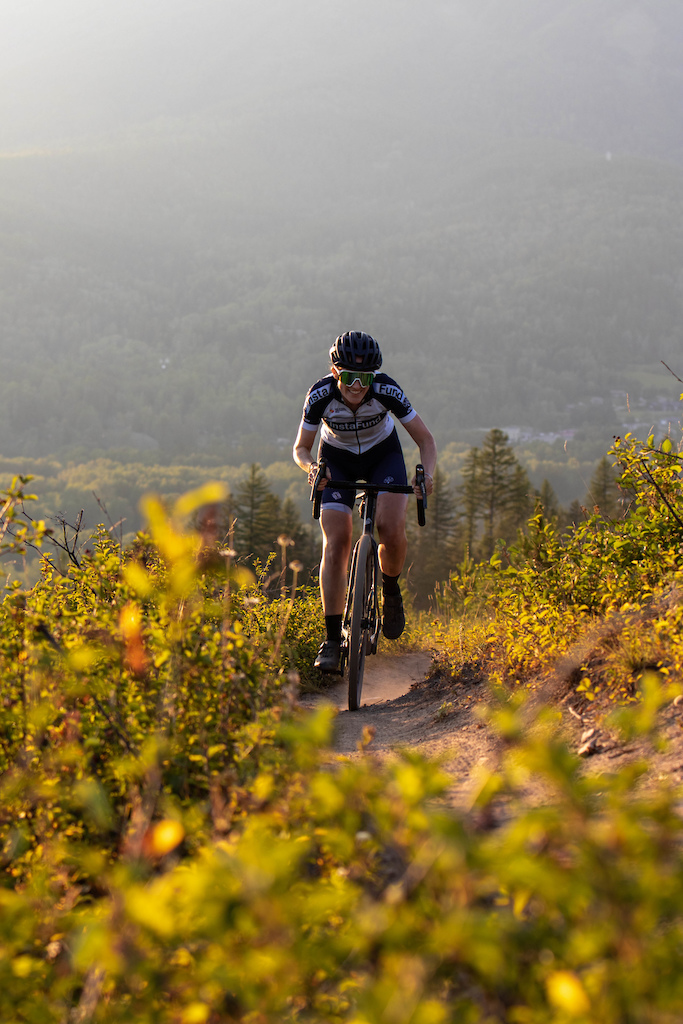 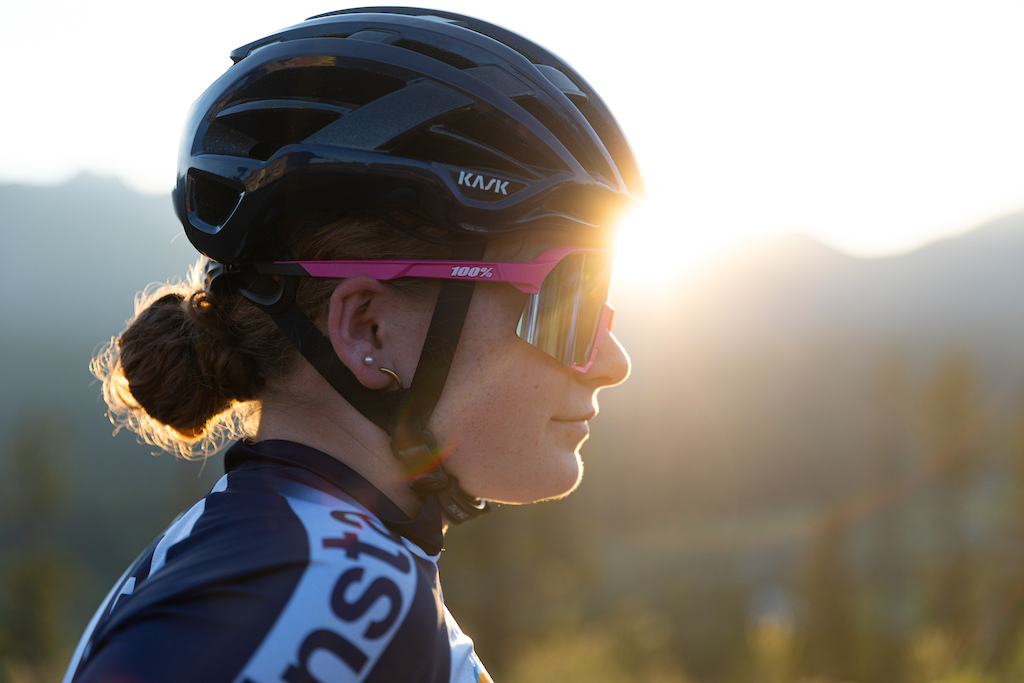 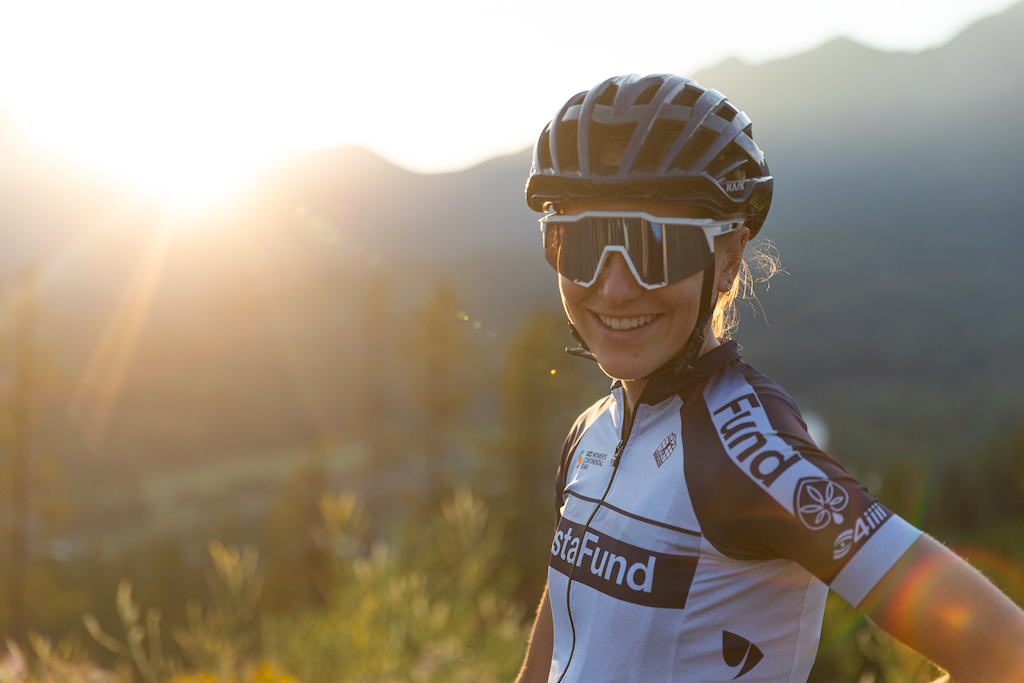 Gabby Traxler, InstaFund La Prima Racer // Nick Nault
Hard to get in front of the camera (likely fixing a flat or adjusting some gears), Ryan Lidstone, InstaFund La Prima Mechanic, Team DJ, and knower of all bike related things, is the undisputed glue to the team and the kind of guy you want on your side. He kept the good vibes rolling all week. 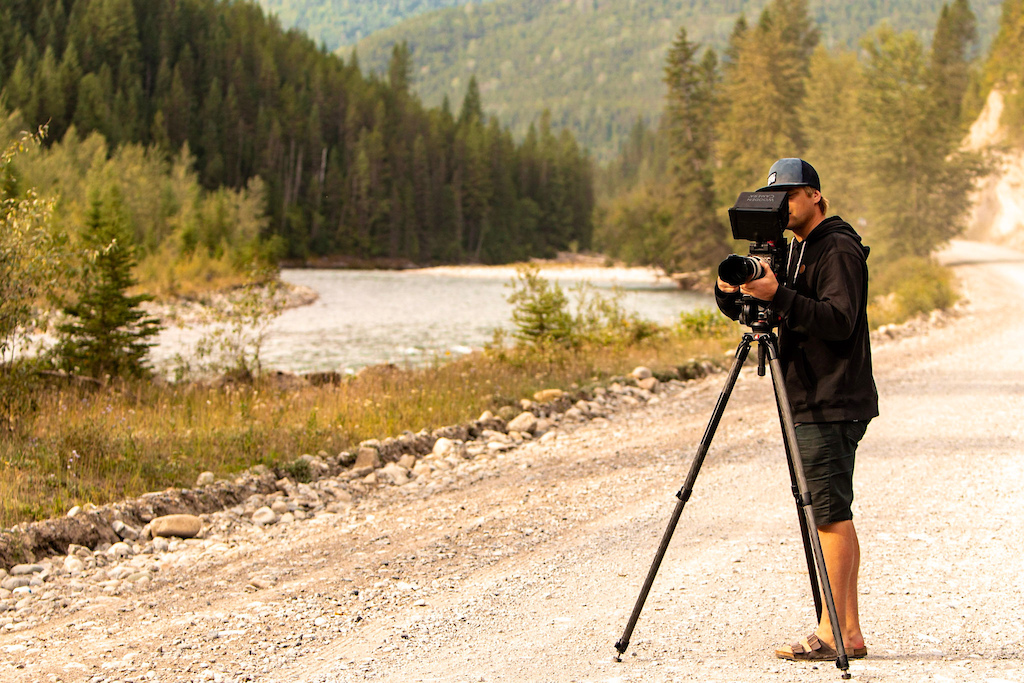 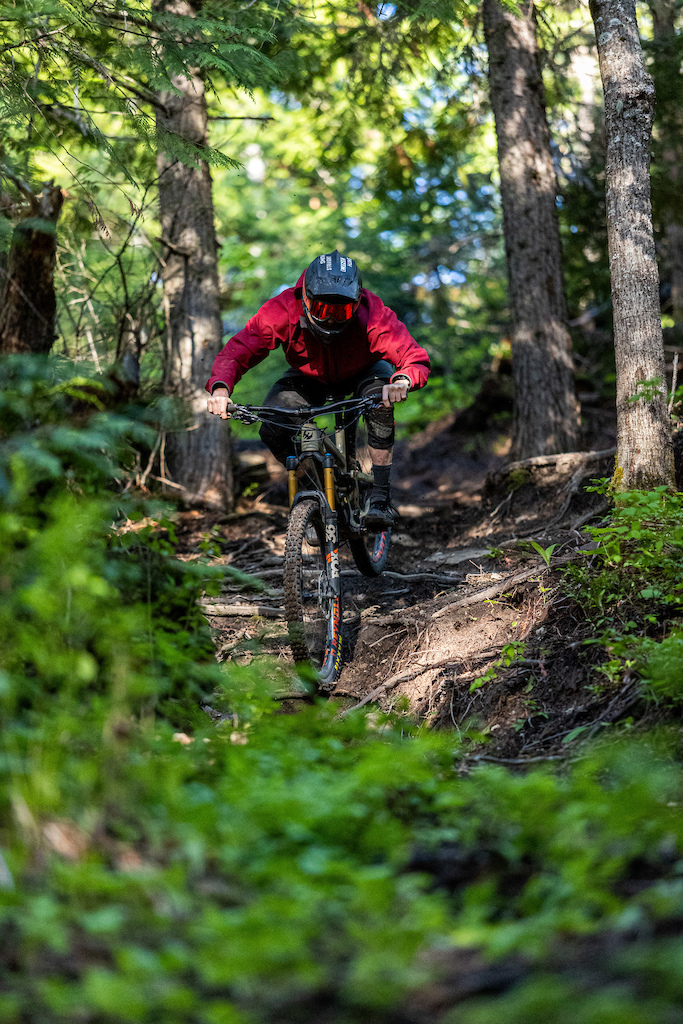 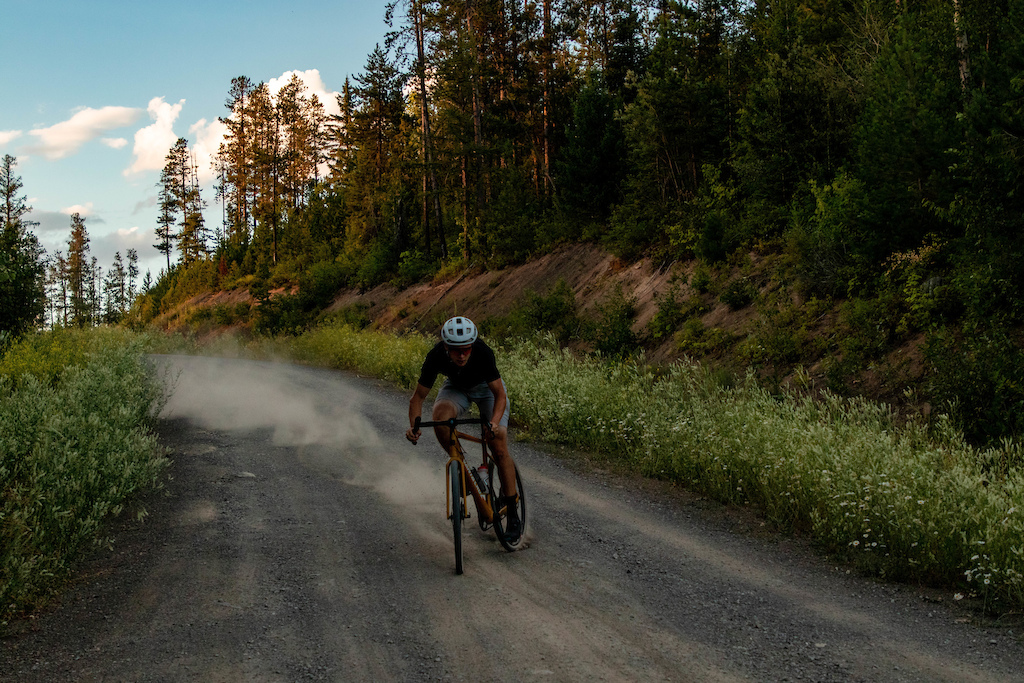 Carter Nieuwesteeg, Event Organizer of the Fernie Gravel Grind, Athlete for Santa Cruz Bicycles // Aidan Jones
In a normal season, the team would have been gearing up for a mid-august altitude training camp in Colorado in preparation for the final races of the year. However, they were here in Fernie, riding backcountry gravel roads, floating down the Elk River, sipping coffee, and sitting around campfires all the while cracking way too many jokes. A pretty typical day in Fernie, but certainly not a typical team camp.

The Trip
After a long day of travel from Vancouver the team arrived in Fernie, welcomed by a socially distanced dinner at the Brick House followed by a spectacular lightning show over Morrisey Ridge. It was a sure sign of an exciting few days ahead.

Day 1
Waking up surrounded by the Rocky Mountains, the team grabbed their bikes and headed out for an adventure with Nick behind the lens. They found themselves climbing up the Lizard Range amongst it's spectacular old growth forest. Though gravel was the main course, they couldn’t help but enjoy some of the local machine built single track. 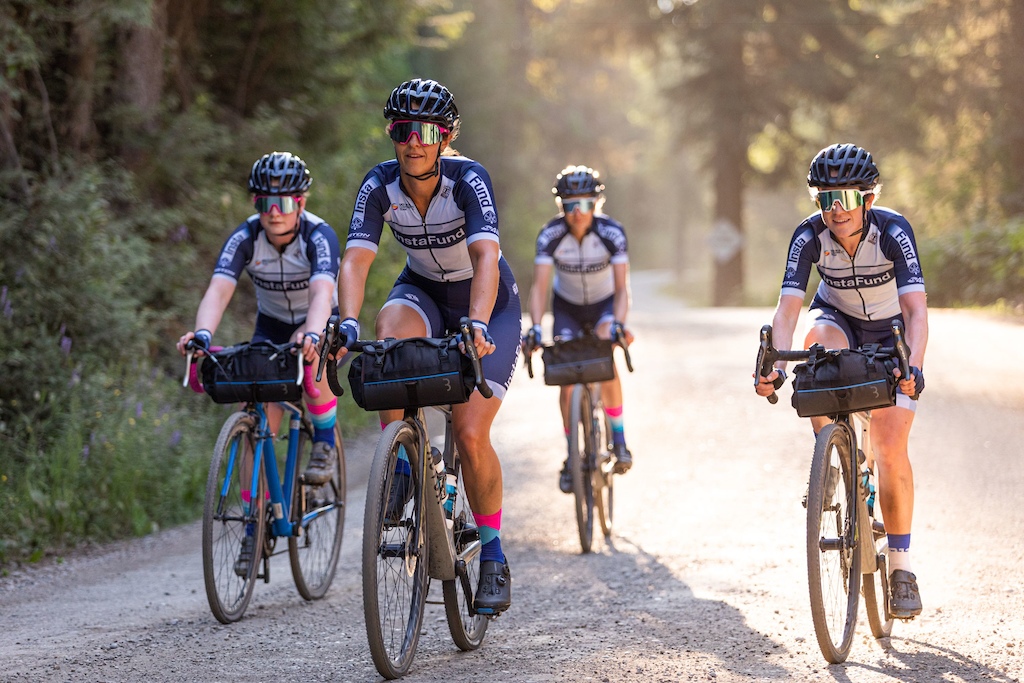 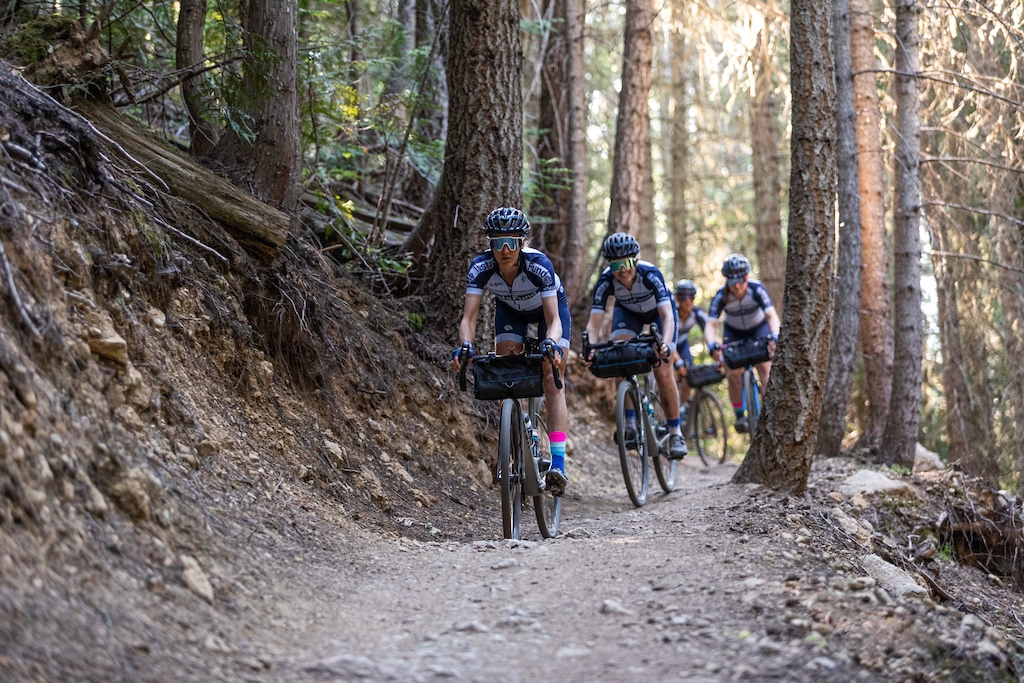 Getting sidetracked by the single track, the reason why Fernie is on the map as a cycling destination // Nick Nault
After getting their gravel fix, the team headed into town to find caffeine and fully immerse themselves in the local scene. Mission accomplished. 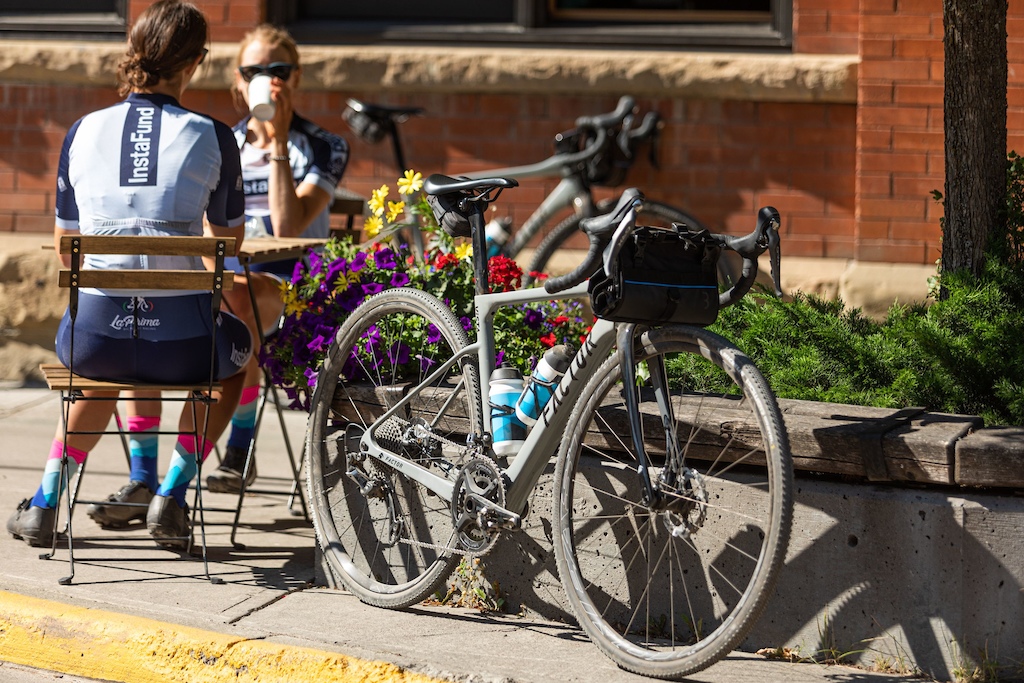 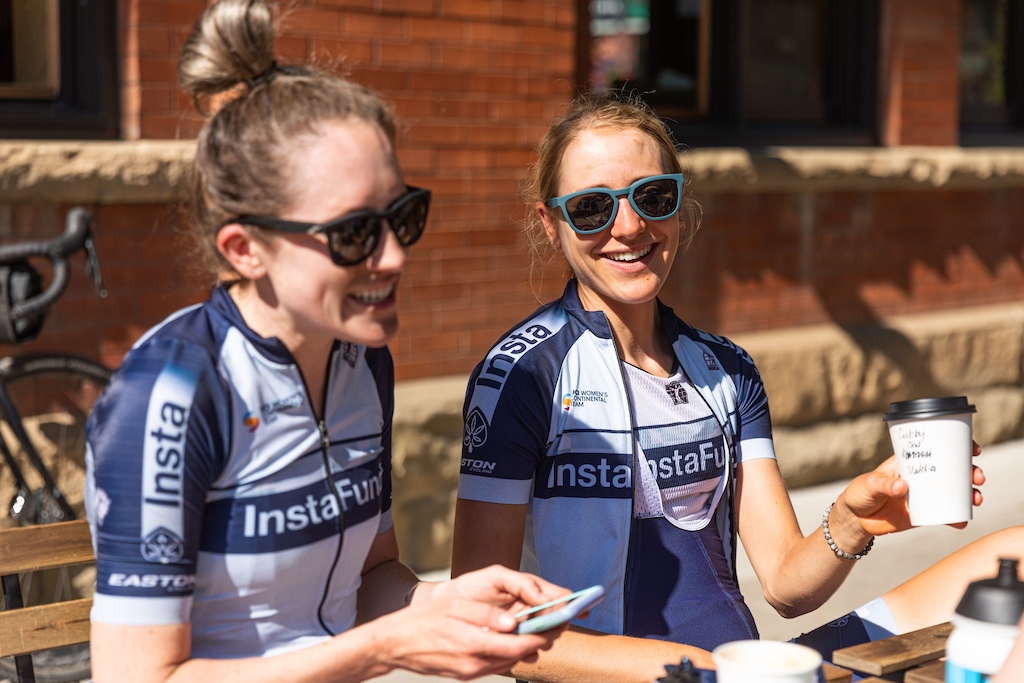 Kit and Traxler joking about something, typical // Nick Nault
Caffeinated and needing a break from the heat, the only rational thing that came to mind was to float the Elk River. A fun time out on the water and a first for most. If that doesn’t sound like the perfect day, it was capped off with a dinner downtown at the Loaf followed by, yes, yet another gravel ride while enjoying golden hour in the valley. 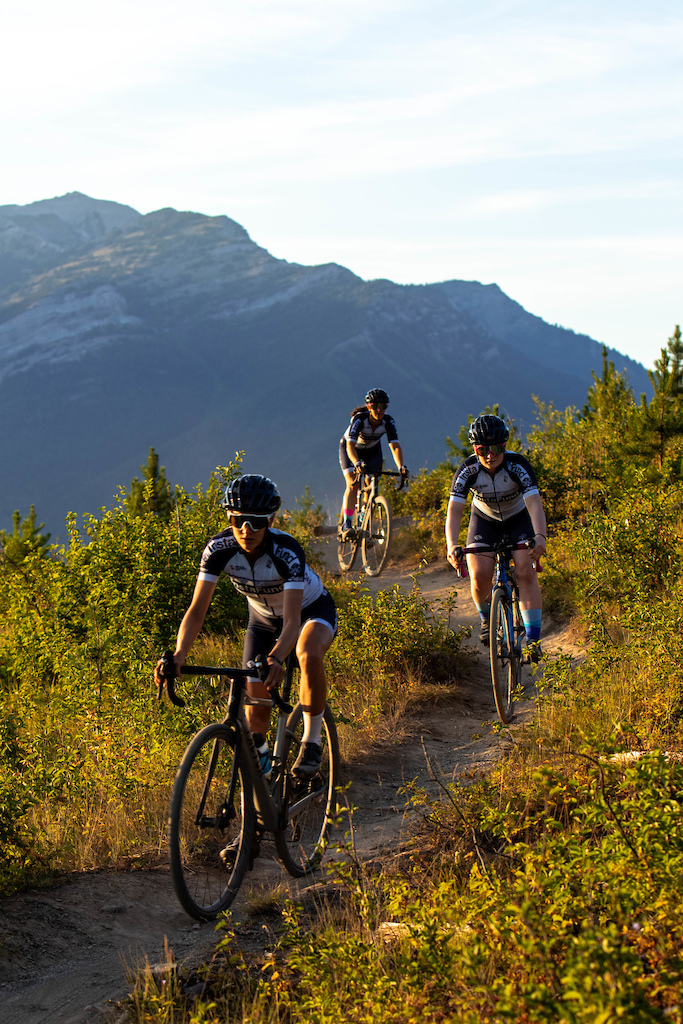 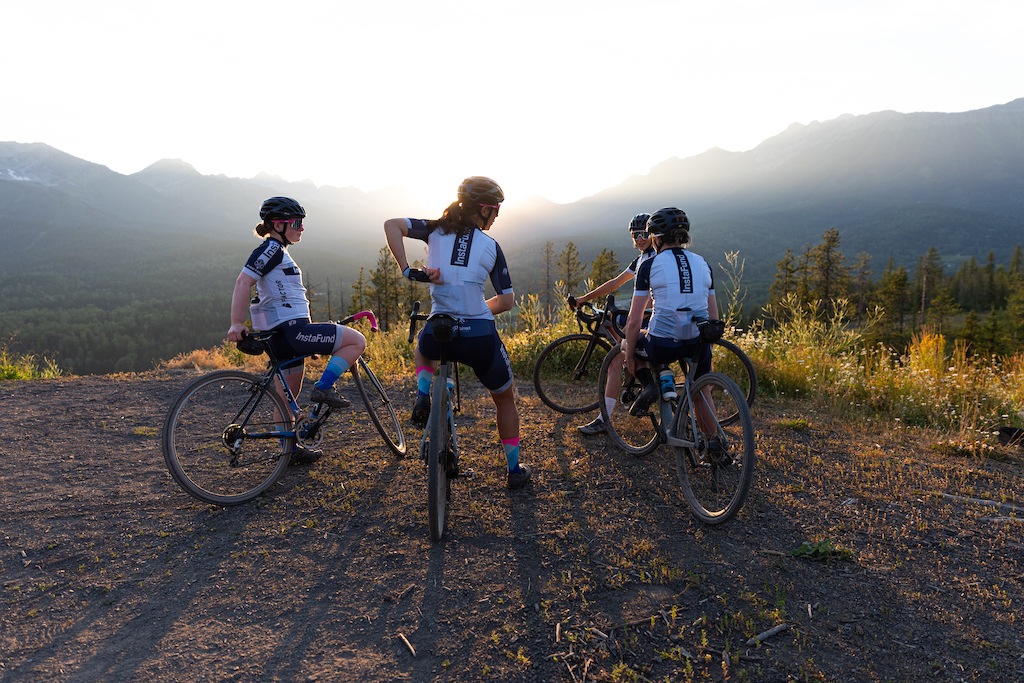 Most likely talking about where they'll get coffee in the morning // Nick Nault
Day 2
As the old adage goes ‘the early bird gets the worm’. Well, after a 4:45am wake up to catch the morning light in the Bull River, that bird must of had a belly ache. On this gravel adventure the team was joined by Carter, Nick, Ryan, and Aidan. The crew covered all sorts of terrain that makes up the Bull River which is also one of the main features of the now virtual Fernie Gravel Grind. Minds were blown. 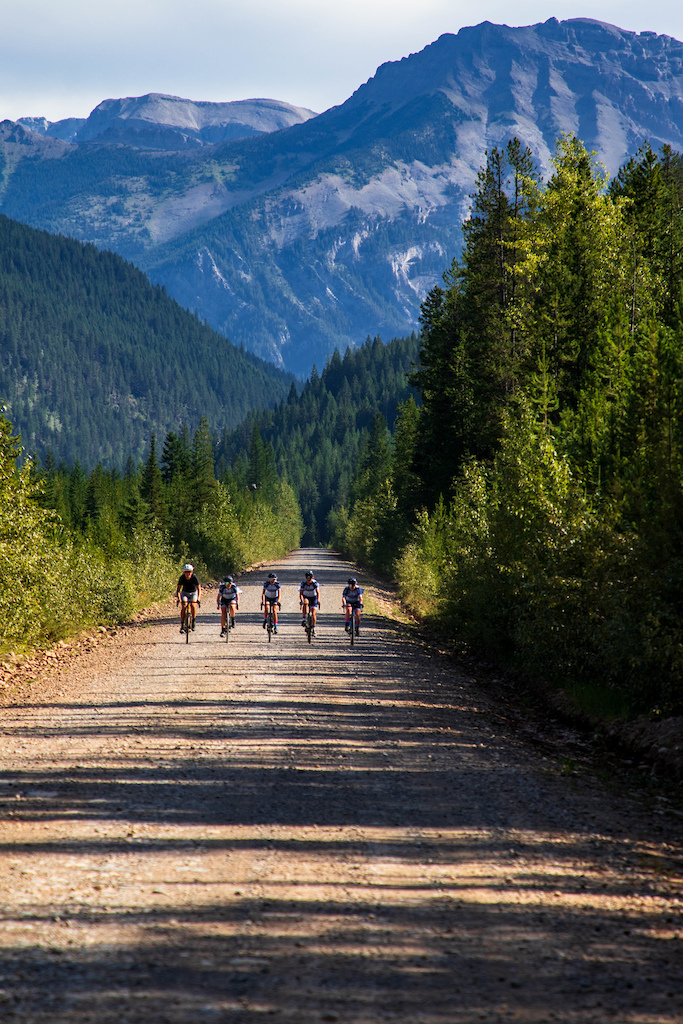 One of many iconic vistas along the Bull River Forestry Service Road // Aidan Jones
The Bull River is considered a small town a best. Located on the east side of the Kootenay River, the town was created in the 1860s when coarse placer gold was discovered. Today, gravel is the new gold. The name Bull River comes from a prospector called Bull, who back in the day was known for panning placer along the river. Though the boom for gold disappeared after the turn of the century, forestry operations in the area kept the town alive while opening up hundreds of kilometres of pristine gravel roads. 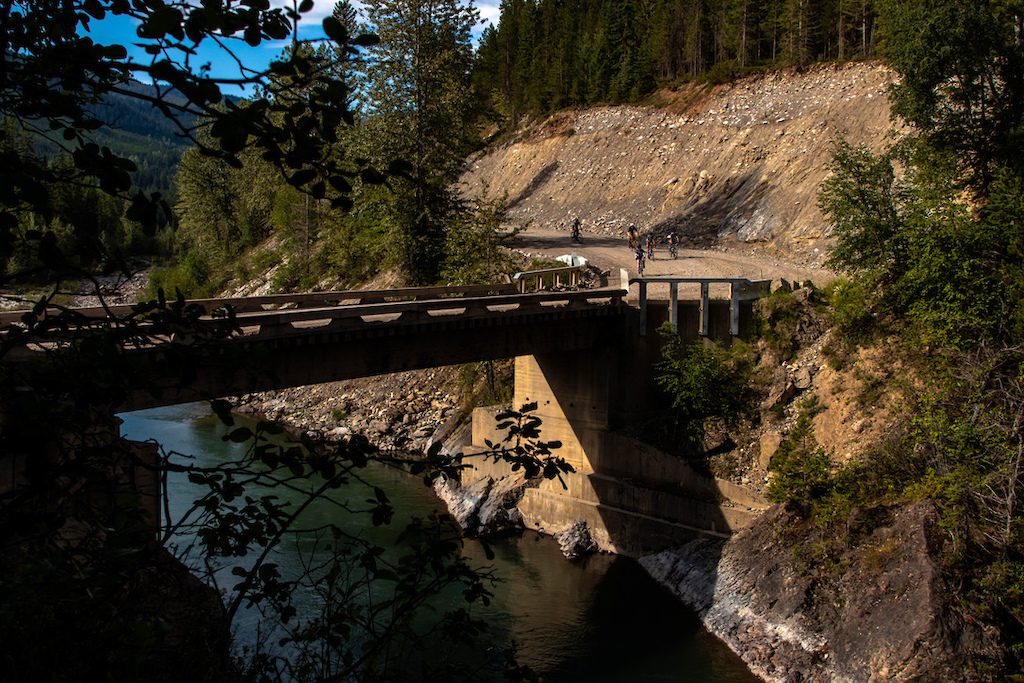 A windy road or just a windy river, either way there were a lot of bridges // Aidan Jones 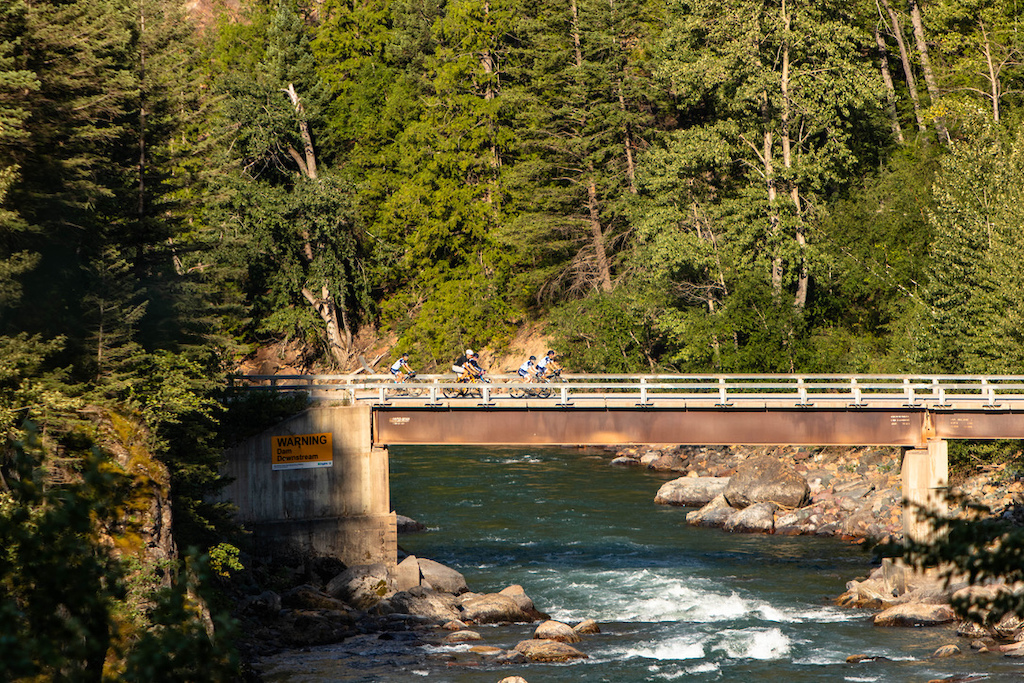 Probably both // Aidan Jones
After a river dip, some Beanpod Chocolate, and a few more kombuchas, Kristen traded the drop bars for flat bars while Carter tried to keep up. 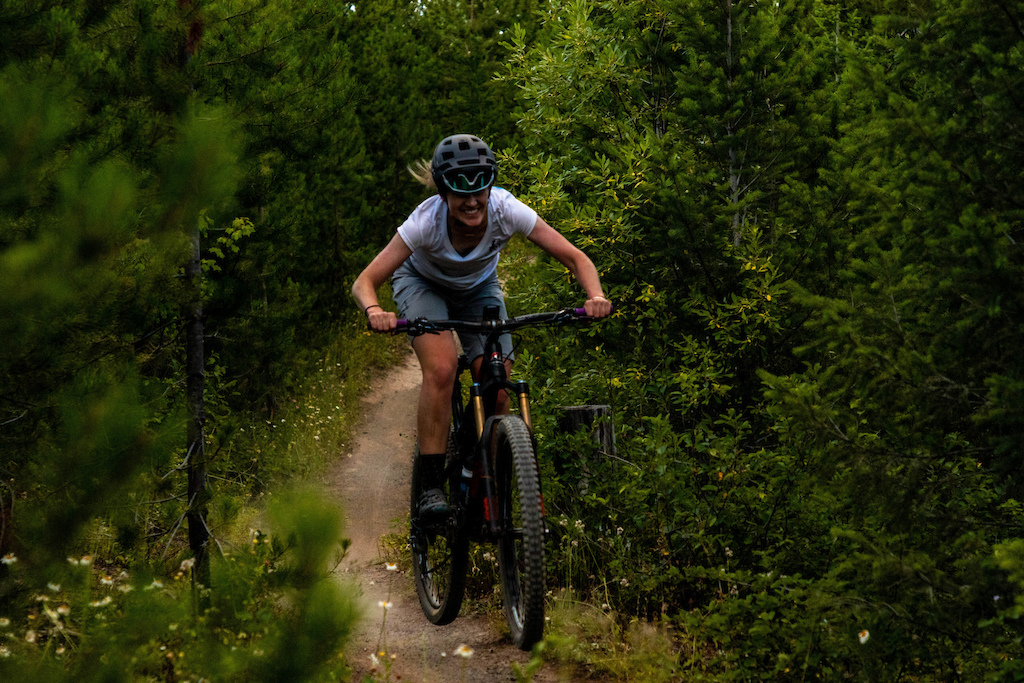 From boats to bikes Kristen shreds them all // Aidan Jones 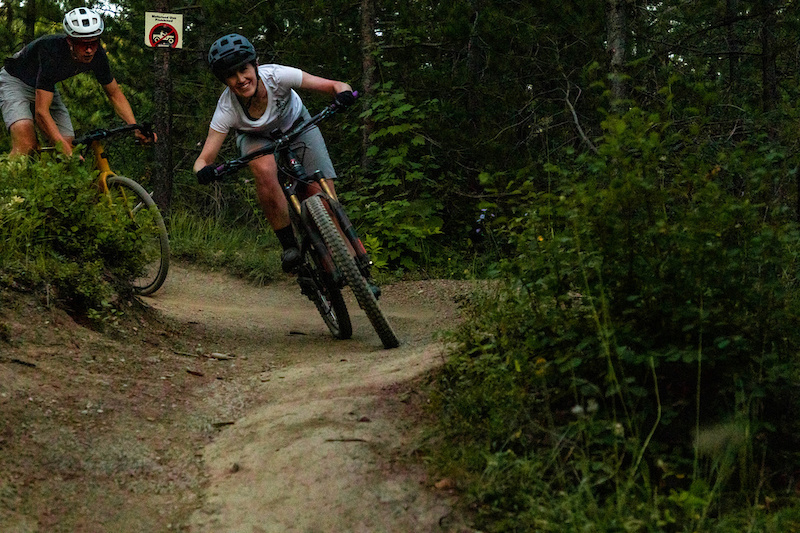 Day 3
What happens when you place a bunch of incredibly fit riders at the base of a climb? If you thought a nice easy ascent, you've thought wrong. Hungry for racing, the casual gravel ride out toward Morrisey quickly turned into a flat out Strava hunt. Almost as if it was choreographed all summer long, the team quickly formed a pace line and went for it. 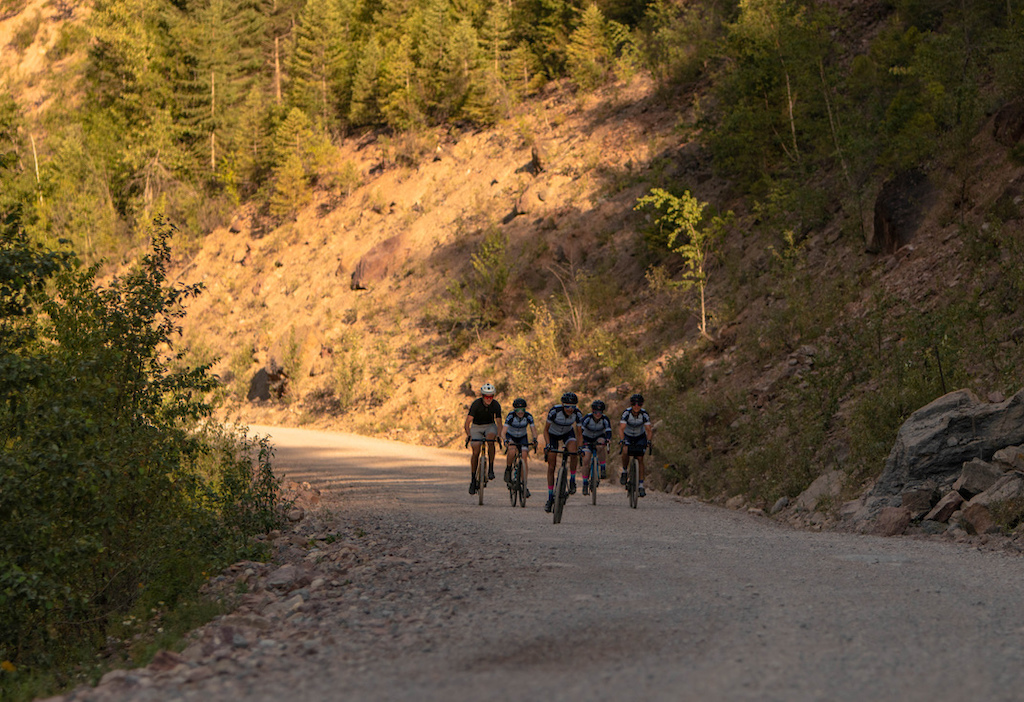 A team effort getting to the base of the climb as quickly as possible, burning all the matches so Traxler can hit the gas on the climb and claim her crown // Aidan Jones
The climb to the top of Paiges Draw from Morrisey FSR, another route of the Fernie Gravel Grind, is no joke. With 12 kilometres of ascent at an average grade of 6% and 900m of elevation gain, it takes most people close to two hours to climb. These ladies crushed it with sub 50 minute times. Isabella initiated the hunt by fiercely pulling the team to the base of the climb while Gabby did what she does best and climbed up, and away. The hard effort up to the summit of Paiges Draw hurt everyone, but no one complained as it was the closest thing to racing that most of us had gotten all year.

Once reaching the summit, the team slammed some ride food and then began the hard earned descent. Hoots and hollers echoed across the alpine meadows. It turned out climbing isn't the only thing the team is good at as they bombed down Coal Creek Road back into town for another river dip and a send-off bonfire to mark the end of their out of the ordinary team camp in Fernie.

It was a wild few days hosting this incredibly kind, funny, and fast group of athletes, and surely this will not be the last time they come to Fernie for the gravel scene.

Until then, InstaFund La Prima. 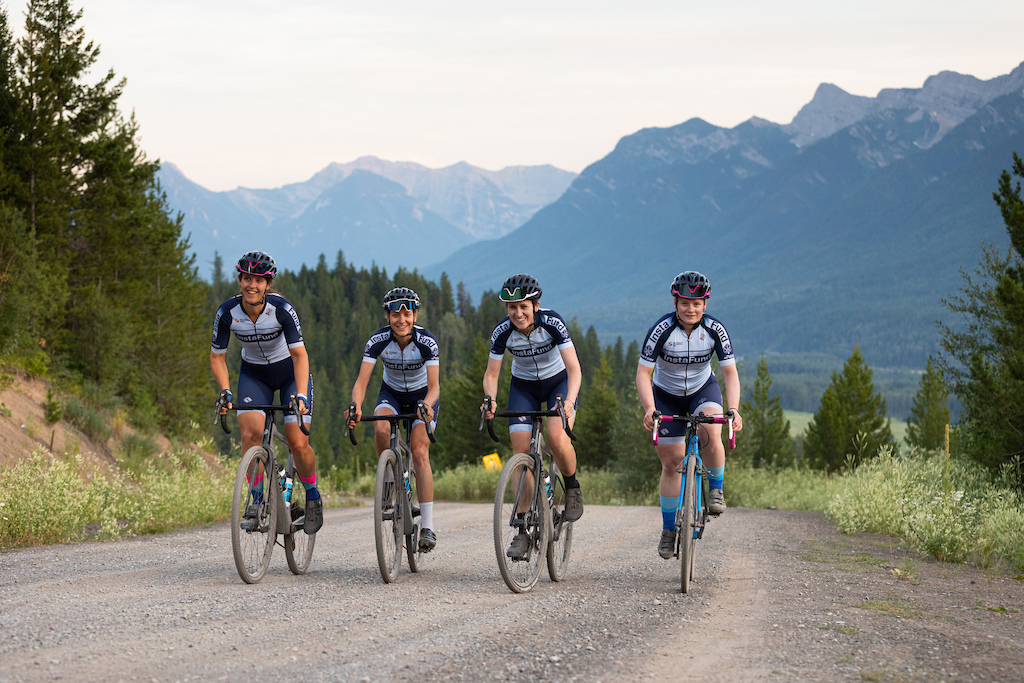 So far the Fernie Gravel Grind has raised over $6,000 for the non-profit organization, the Fernie Trails Alliance, with time still left to donate and take part in the gravel fun.

Thank you to everyone who has participated thus far. The virtual event closes August 30th.