May 16, 2013 at 1:09
by Clemens Capeller
Tweet
After a long an snowy winter in Europe, Katja, Kathi and Michèle decided to start their first roadtrip of the season together and escape to some hopefully sunny places in Switzerland and Italy. Steffi couldn`t join because she had to guide for a week in South Tyrol. So the three girls escaped their normal business life and took a few days off to get into the bike mode and kick off the 2013 bike season. 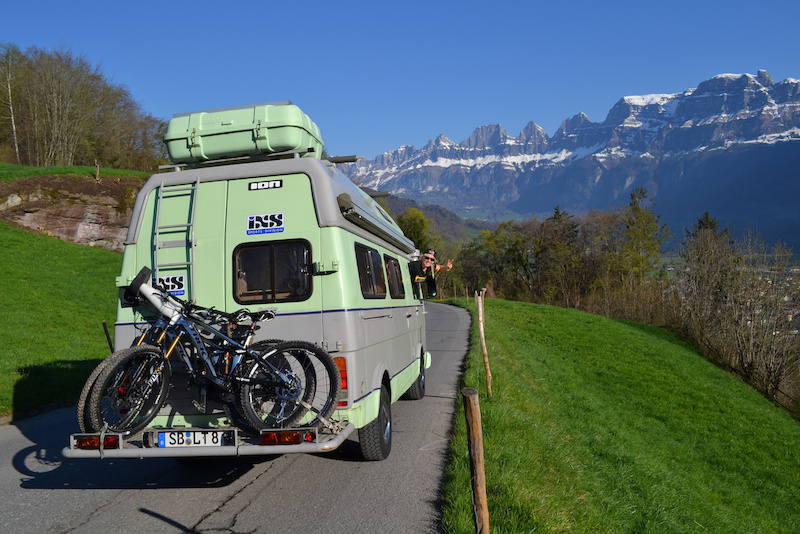 Well here it is, "Hugo the Bus", the perfect Roadtripmobile. The trip started at Katja`s home in Flumserberg, Switzerland, with a view of the Churfürsten mountain range above Lake Walensee. The first destination for the girls was Ellhorn in Liechtenstein. 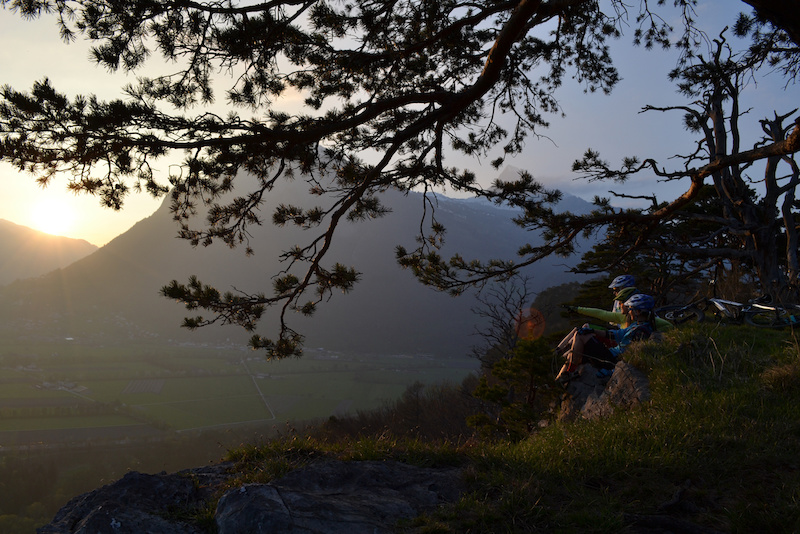 The girls enjoying the view in the Rhein Valley. 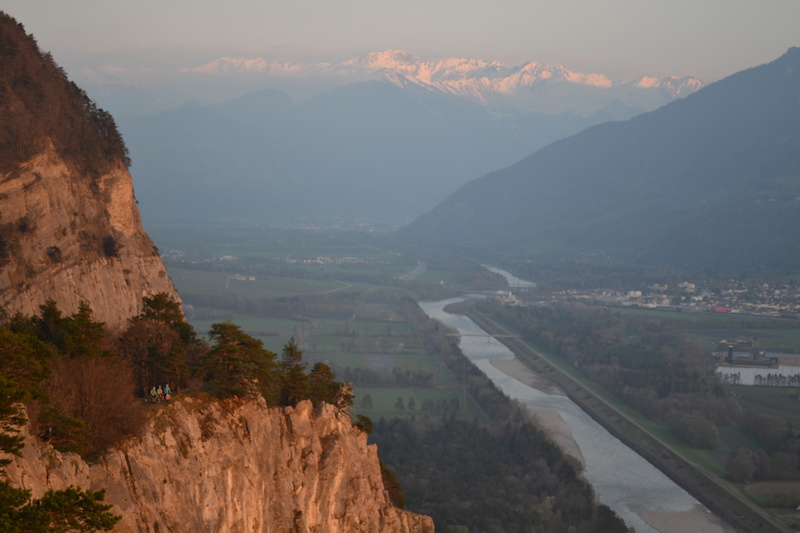 Katja said, "For the first ride of our road trip I wanted to show my two teammates my favorite spring trail. It´s one of the first trails without snow in the region. We had to hurry a little bit on the uphill because we wanted to be on the highest point before sunset. We arrived just before, enjoyed the sunset and then went down on a trail near the Krete. The perfect end of the day was a nice evening at my home with a typical Swiss raclette.“ 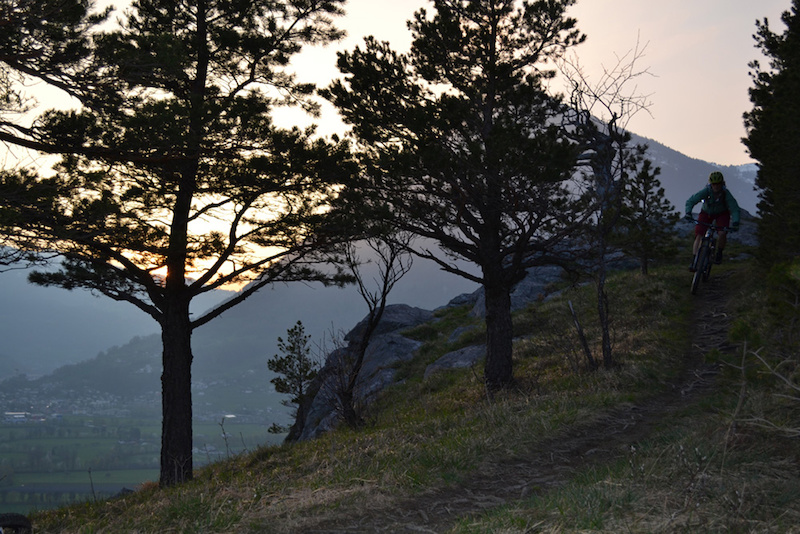 Michèle enjoying the trail at Ellhorn in the evening sun

The next stop was Monte Tamaro in the beautiful Ticino, the southern part of Switzerland. Monte Tamaro is one of the earliest opening Bike Parks in Switzerland. So it was time for the girls to get the big bikes out. And yes, it looks like the Trek Session and it is a Session. Local ripper and photographer Marco Toniolo joined the girls for two days of awesome shooting and riding. 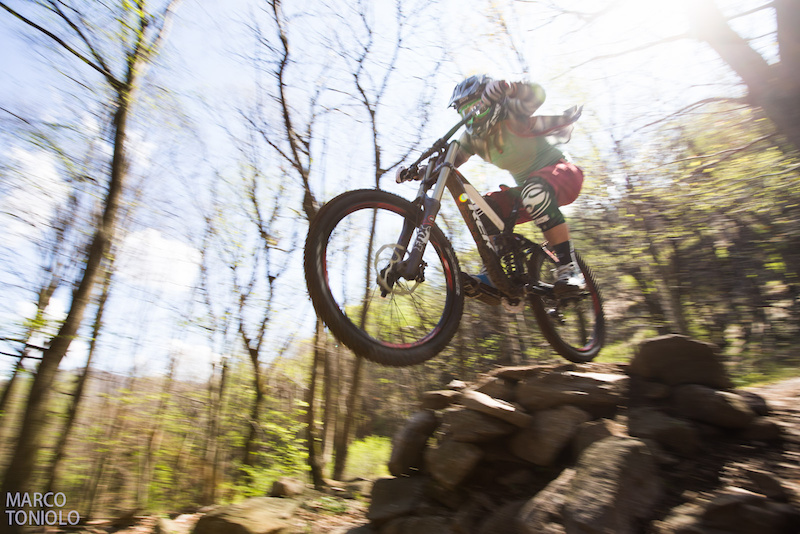 Kathi sending it at Monte Tamaro. 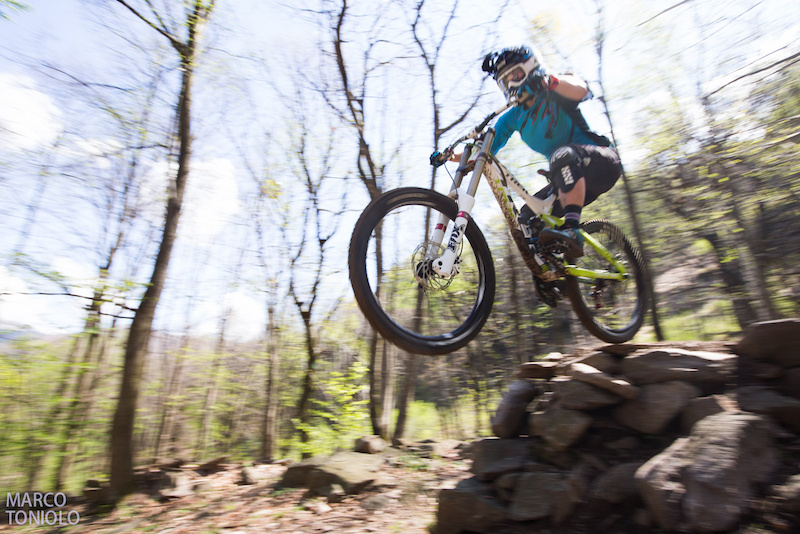 Katja getting some air time. 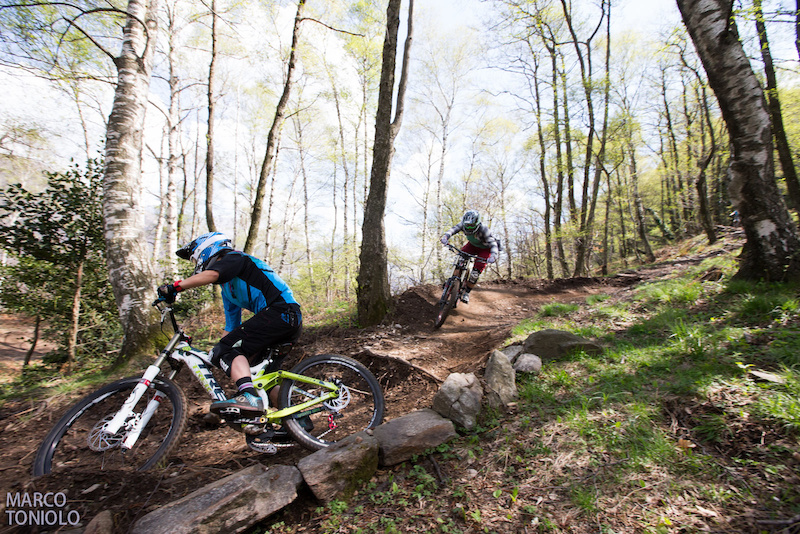 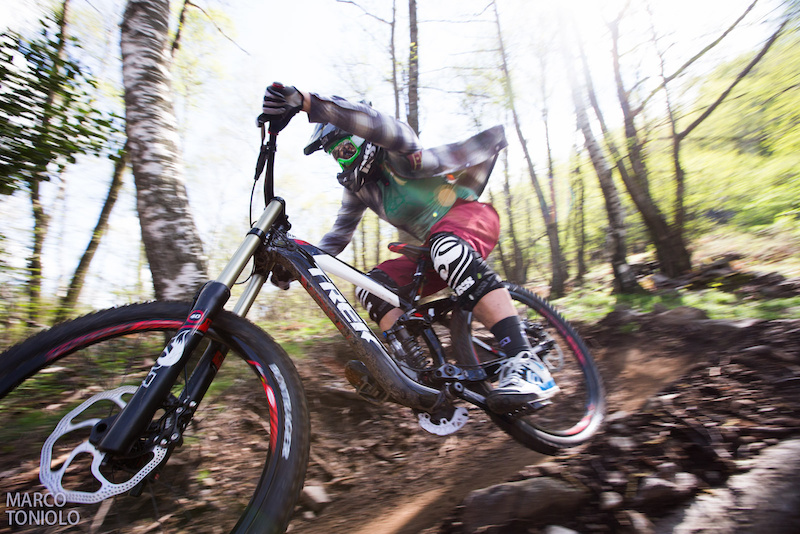 Kathi on the gas, down the downhill track at Monte Tamaro. 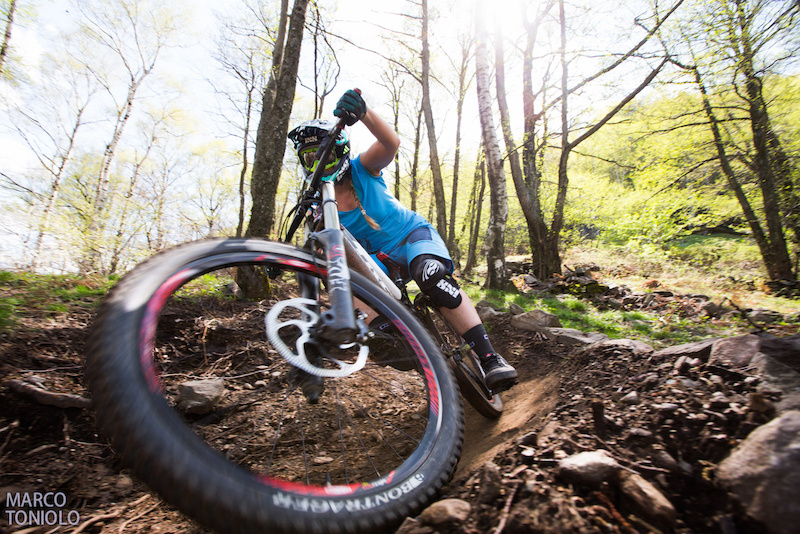 Michèle enjoying the corners on the track. 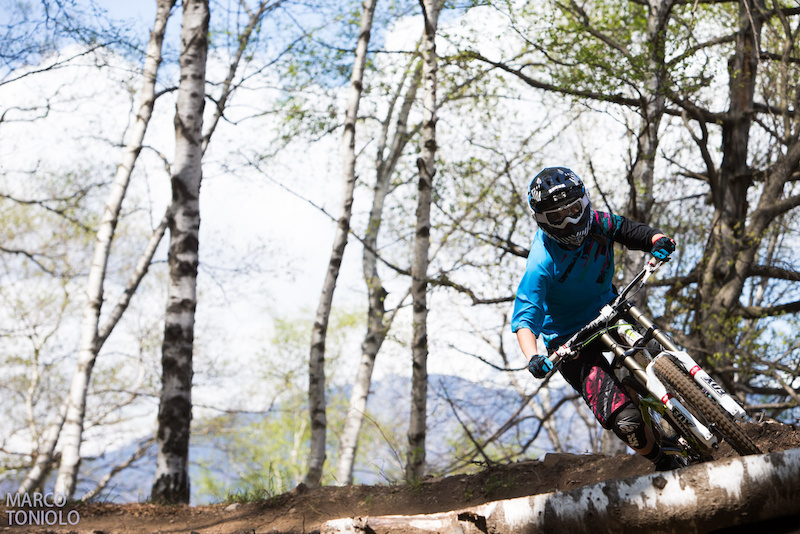 "Once upon a time there were people who played Tetris on their first computer. It was about to sort and shelve bulky packages in very little time. It turns out to be very useful on a roadtrip. Tetris artists also hide bikes in camping showers within a second." - Kathi

We know, life on a roadtrip is hard. We enjoyed every moment.

The next day the girls and Marco went on an enduro ride at Monte Bar. 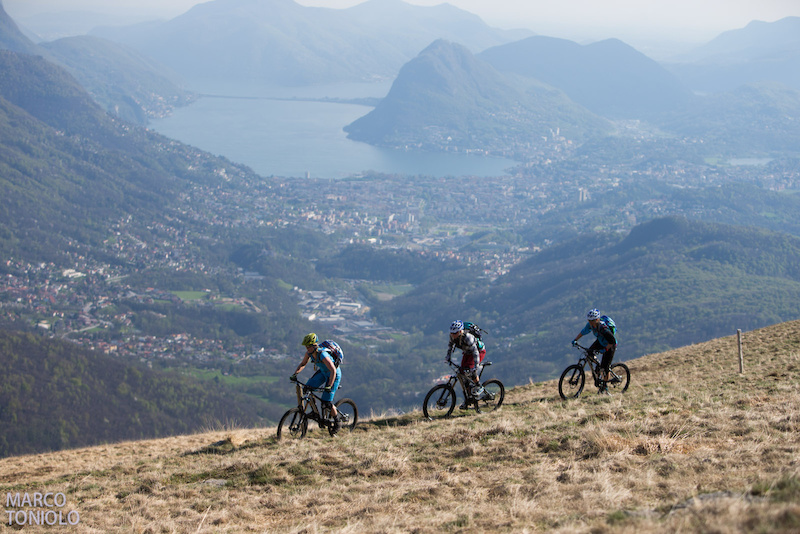 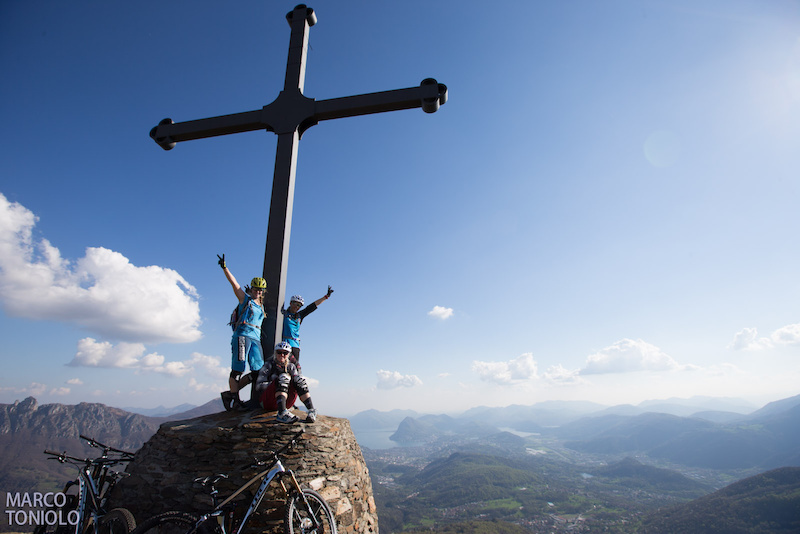 Katja, Kathi and Michèle on the peak. 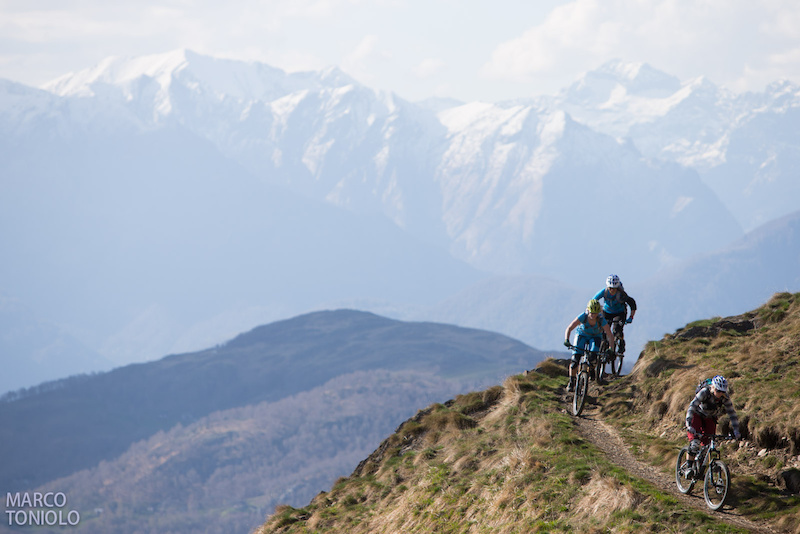 "I think it was Eric Zabel who said 'Mountains are the natural enemies of humans.' Nevertheless, the beautiful view over Lago Maggiore and Lago di Lugano made everything up for the raw downhill." - Kathi 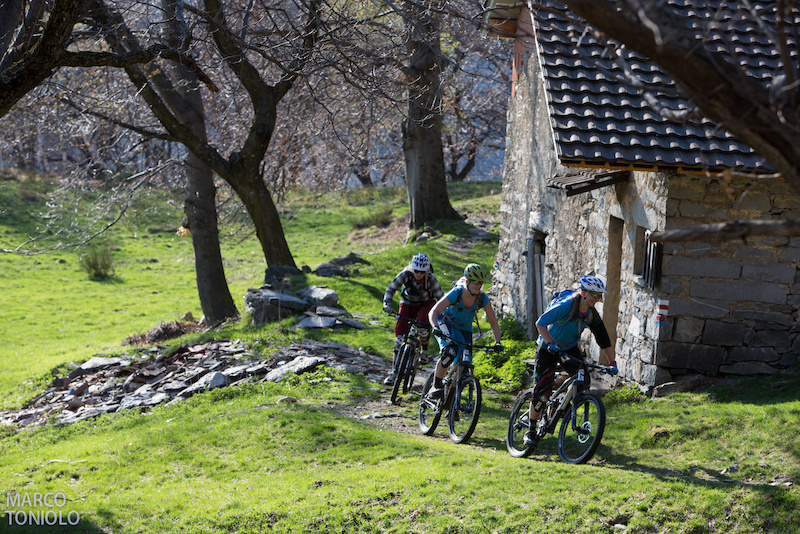 Katja leading down Michèle and Kathi as the trails becomes really flowy. 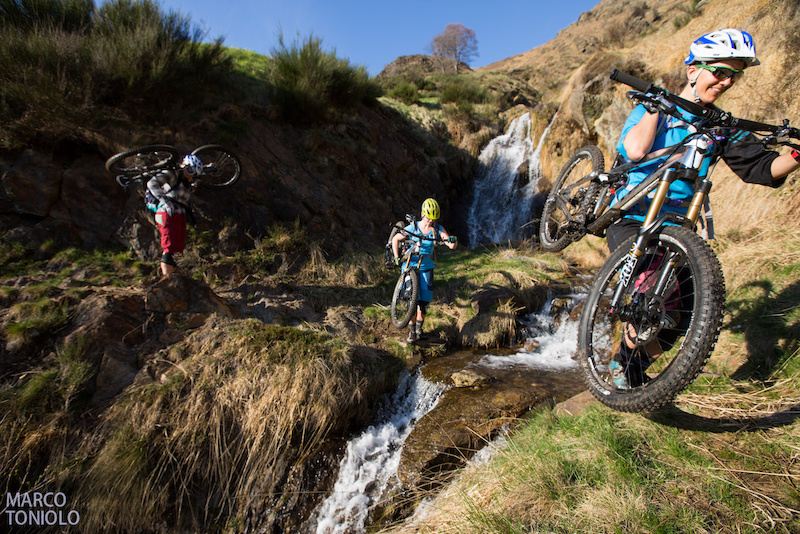 The rough side of Ticino...a little bike and hike..more water than normal in the region after the long and snowy winter. 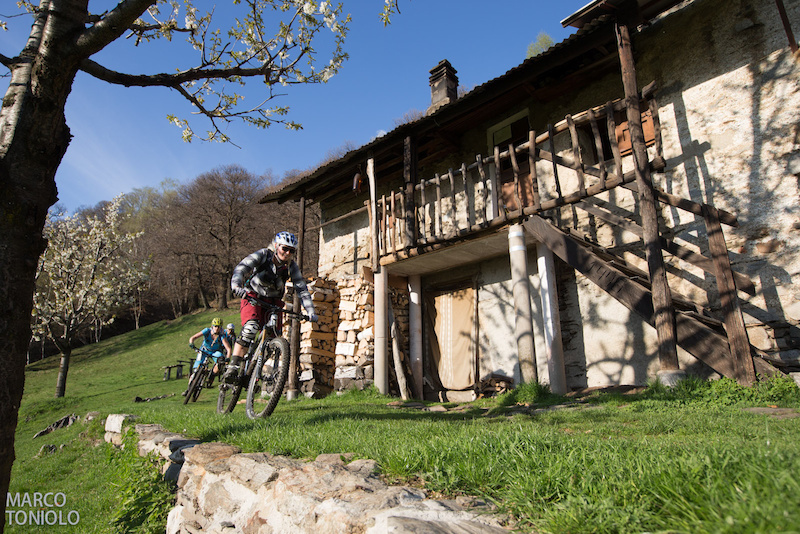 The next mountain on the plan was Monte Lema. 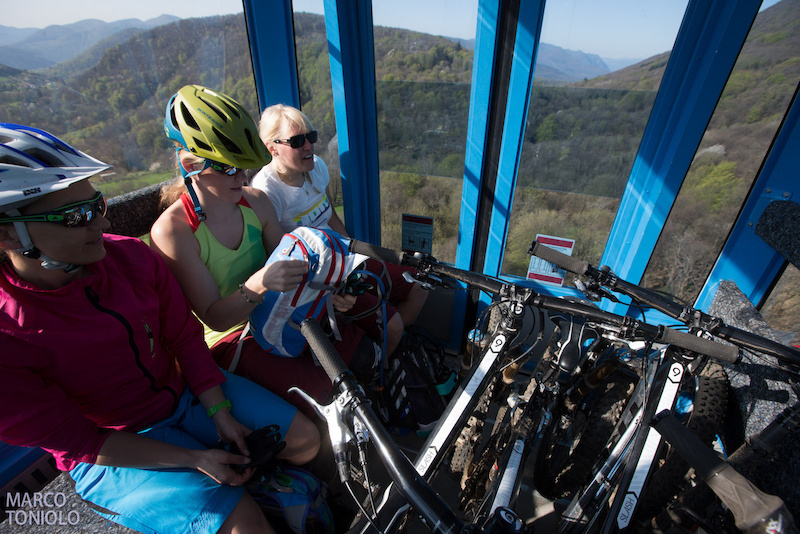 A little support on the uphill. 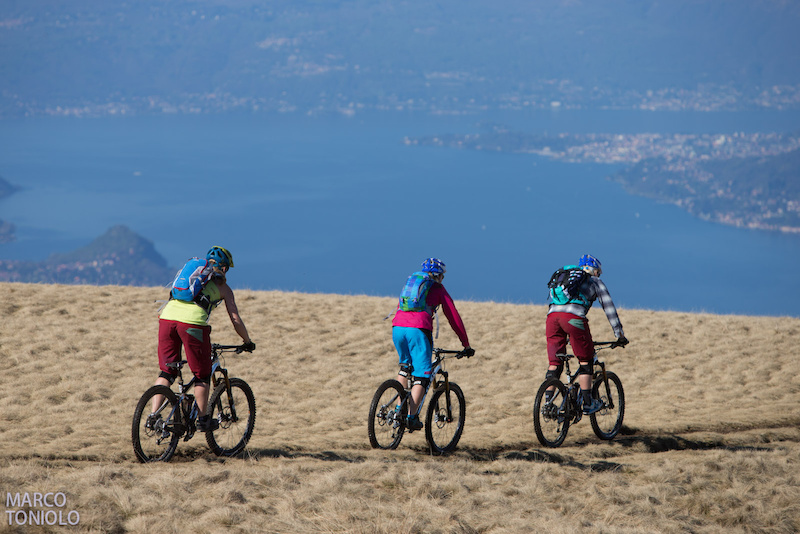 Today there was an even brighter view on the lake. Awesome place. 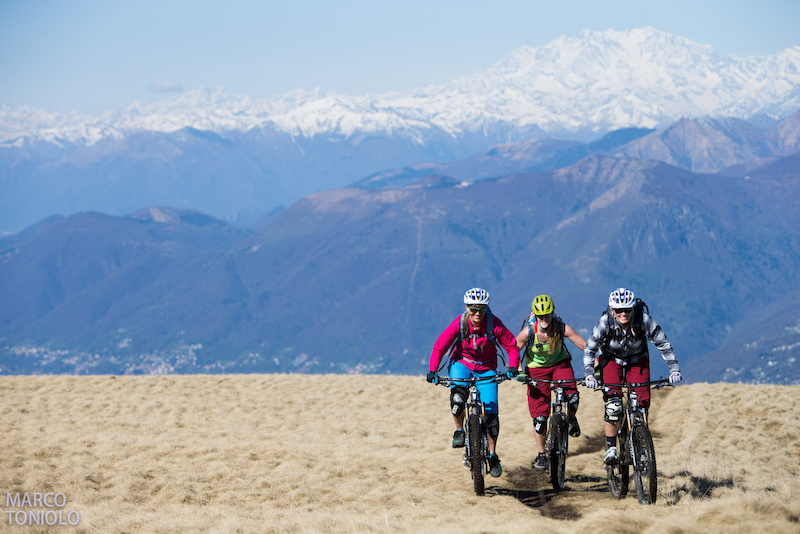 The mountain in the background is Monte Rosa, still covered with a lot of snow. 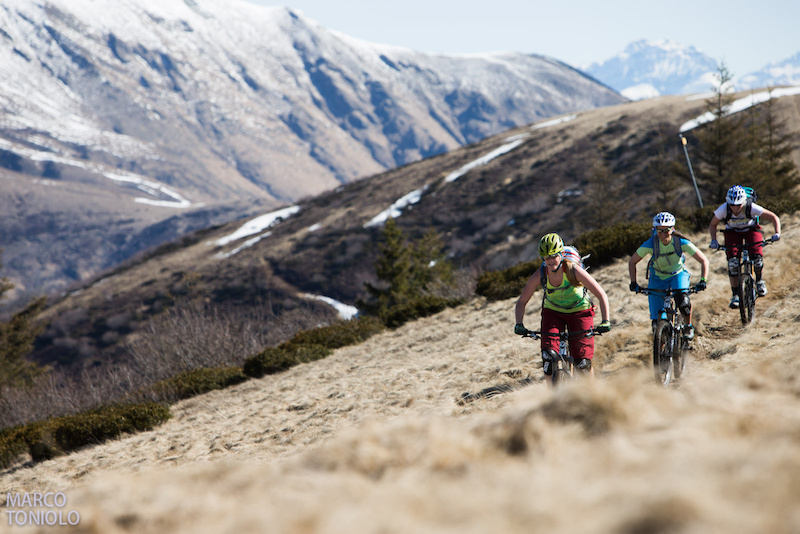 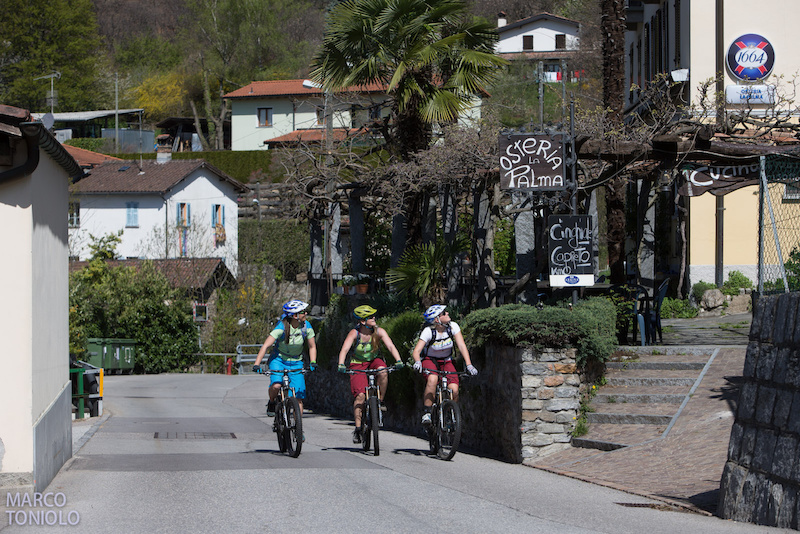 After spending a few days in Ticino, Hugo the bus had to work again.....The next stop would be "ocean and trails." Sounds good, so Finale Ligure here we come.

All about Finale Ligure: http://www.finaleligure-bikeresort.com/en/Home.html 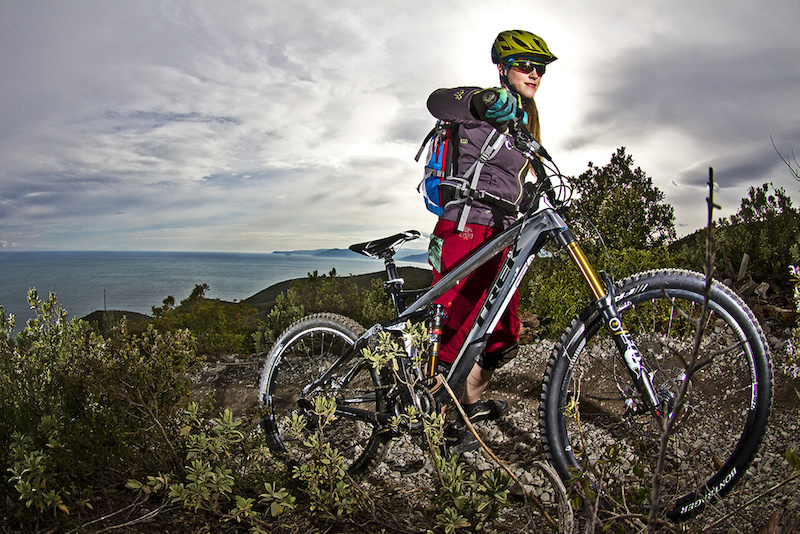 Michèle at the Varigotti trails in Finale Ligure, just an amazing place for riding

“Finale Ligure is one of my favorite riding spots. Normally good weather, palm tries and beaches and a real single track paradise. For the first day we had booked a shuttle and we rocked the classic shuttle trails like Madonna, Hunter , H-Trail. For the second day it was endure time. Getting in shape on the uphill and then enjoyed the Varigotti trails. Unfortunately the weather god changed his mind and we also got a little bit of rain…but that didn't stop us. Then it was time to pack Hugo again and return to normal life and work.” - Michèle 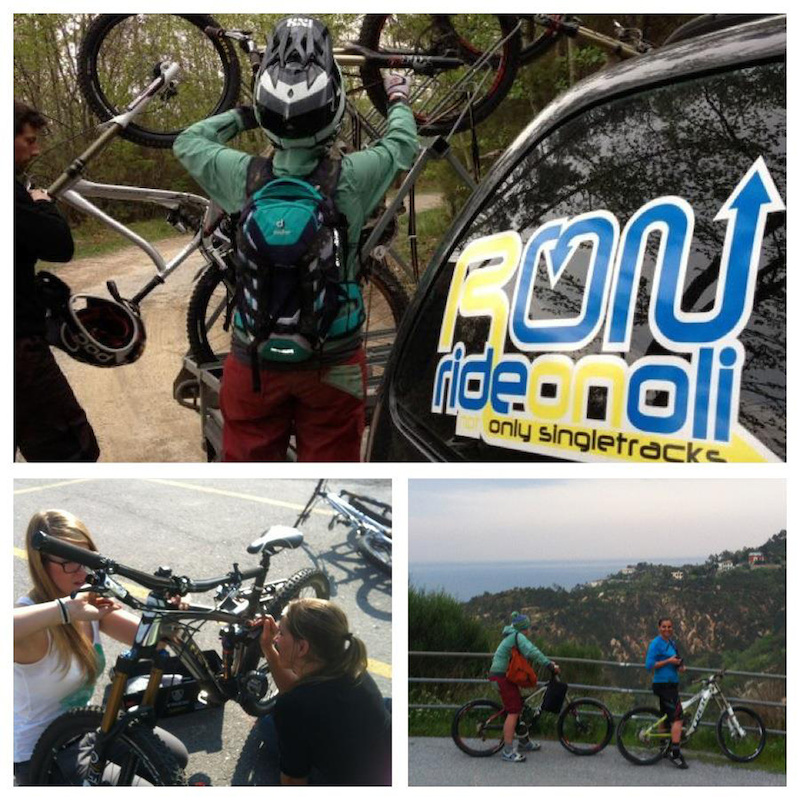 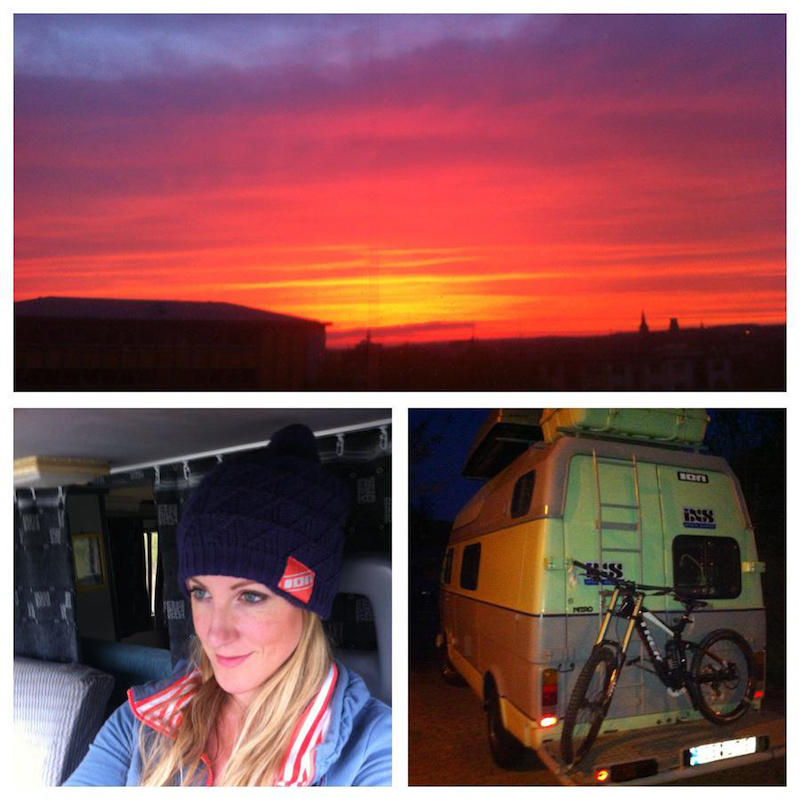 Nice trip and safe at home with "Hugo the Bus."

You can follow the girls on their adventures at
https://www.facebook.com/TrekGravityGirls

The man behind the lense at Ticino. Marco Toniolo, thanks for shooting and guiding in your backyard.

panaphonic (May 25, 2013 at 1:04)
Women + mountain biking = awesomeness. Would be great to see more of them out on the trail enjoying this great activity!

PHeller (May 25, 2013 at 6:37)
The trick is, how do we make this cool for young women? Tons of teenaged girls ski, snowboard, surf, but only a small minority of teenaged girls get into mountain biking. For dudes you can be like "yo bro it's like motocross without the motor, you need to get ripped!" and dudes generally like the physical challenge of mountain biking. The same approach doesn't work for women. We need to make it cool. We need an all girls "where the trail ends" to show to our wives, girlfriends and daughters.

Claire32 (May 26, 2013 at 0:32)
Typical that a British man (or should I say boy) would make a comment like that! Cool girls do like to ride in the UK. That comment was probably just made by a guy who all MTB women (and probably women in general) would avoid!!!

American-tifosi (May 25, 2013 at 17:37)
How can you not love women's cycling? Singletrack, road, cyclo-cross, velodrome, whatever. Beautiful pic's. Hope the UCI get's their head out of their collective asses and moves womens cycling forward.

Claire32 (May 26, 2013 at 0:45)
It looks amazing!! But it's something I can only dream of. I love riding my local welsh trails and mountains (not quite Switzerland but its still pretty sweet) but that road trip looks mighty expensive, the big name sponsors, all the top biking gear, even Hugo!! This sort of article only makes me jealous of all the kit I can't afford and of the places I long to ride. Where are the girls who ride your average MTB? Lobbing their bike in their car :-D

clemson (May 26, 2013 at 1:02)
Hugo is a 20 year old Volkkswagen LT...sleeping in a van is not so expensive.....and you can have the same fun on bikes which are not the top models....but yes the girls are happy to have the material support from some amazing companies,,,,,,,but most important they just want to enjoy shredding the trails and having a good time together as often as they can excape their normal day job.....

deeeight Plus (May 25, 2013 at 3:36)
So that's what you can do with the extended wheelbase eurovans.... no way I'd fit a shower into my westfalia that didn't involve hanging a water bag outside.

british4xfan (May 25, 2013 at 6:15)
I'm saving for something similar, with enough room for my bike and a bed. Might stick a beer fridge in there as well

Helenariel (May 26, 2013 at 1:06)
Awesome pics, would love to be able to ride like that! Shame about the immature trolls on here i guess they don't know much about real women hence their lame attempts at innuendo.

jlhenterprises (May 25, 2013 at 6:04)
I could only think about pillow fights and scissoring when i saw this article

NikolasWoodward (May 25, 2013 at 0:24)
Looks like a Trek session. Sorry had to say it.
Below threshold threads are hidden